View of Granada from the Alhambra

Early start. Purchasing a ‘subway 6 inch’ the night before for our breakfast was an excellent idea! We would’ve been delayed considerably if we had had to source something before heading out. We aimed to get out of the hotel at 8am, but managed 8:30am – the late Spanish nights are working their magic on our early ‘get ups’!

Walked to the top of the hill to the Alhambra, rather than take the tourist bus, and it was very pleasant striding out on the forest-bordered path. So glad we got an early run at this one – when we arrived there were already many people, but there were many, many more by the time we left. And after 4 and a half hours, we were done!

Of course, the big draw card of this magnificent UNESCO World Heritage Site is the Palacios Nazaries. It is highly recommended to purchase these tickets online well before your planned visit, and this indeed was good advice. This provides you with a specified 30 minute time bracket in which to enter the main palace, but once inside, you have significant time before having to leave (we had a 9:30 entry time, and could stay until 2pm).

The beauty and majesty of this Spanish version of an acropolis was astounding and splendid. The scale was enormous! There were once whole cities up there, not just royal palaces or fortresses. The Medina ruins and the ancient foundations of the military buildings within the Alcazaba were surprisingly extensive. Loved that you could tell which homes belonged to the officers – determined by who had ‘loos’ near the front doors!

We discovered that the huge white building that we had been looking at the previous night from San Nicolas in the Albaicin (that we thought was a plush private residence) was actually the summer palace of the sultan. This palace is in a section called the ‘Generalife’ – literal Arabic translation: “architect’s garden”, and the views from here were far-reaching and spectacular.

One thing about the entire Alhambra that has a subtle, soothing effect on the individual is the running water – it’s everywhere, in intricately designed water courses, fountains and features. And its sound and the mesmerising visual is a welcome mood enhancer – excellent design choice. Even now, they have modern water bubblers in many locations for people to quench their thirst.

We wandered in a zig zag fashion back towards the centre of town, stumbling upon a bistro that was mentioned in one of our guide books, but was a little down our list – but the sweet and cheery woman out the front grabbed our attention as we walked past, so we gave it a shot. We decided on the set menu (with veggie options), and unsurprisingly, it was far too much food…AND we passed on dessert and coffee, but oh, well! The restaurant was called Seis Peniques, and they offered a €9 lunch – bread, drink, starter, main, dessert, coffee. Excellent value for hungry travellers!

After our now daily afternoon siesta, we ventured forth into the rather impressive shopping streets in the early evening. We spent a LONG time in a gallery, where, if we had had a spare €6,000 we could’ve walked out with a small Picasso signed lithograph – the signature actually written on it, not stamped. Shame we are skint from all this travelling!

Dinner was at Ruta del Azafrán, down by the little Rio Darro on the aptly named street Carrera del Darro. Once again, we were very lucky in our choice – delicious wine and food (plenty of veggie options) and the perfect outdoor ambiance to enjoy Granada at night. And get this – we had dinner at 10pm! Talk about getting it on like the locals! There was even a very skilled guitarist playing nearby to complete the scene. Very glad to tip her, she was great. Our meals were: apple and goats cheese millefeuille, with pedro ximénez reduction, followed by tagliatelle with vegetables and soy. Unique flavours, not the same old menus rehashed by many restaurants. It really does pay to do a bit of research on the dining front.

The fountain on the Carrera del Darro, Granada 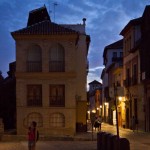 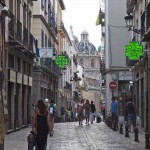 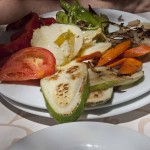 Chilled gazpacho – ice cube and all, at Seis Peniques, Granada 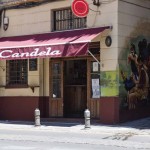 The tower of the Alcazaba of the Alhambra, Granada 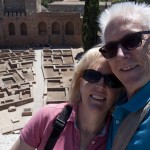 Selfie at the Alcazaba 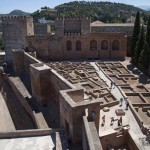 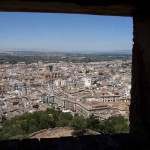 The view of Granada from the Alcazaba tower 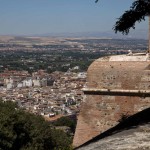 Viewpoint from the Alcazaba, the Alhambra

Fancy hitching rings for the horses in the Alhambra, Granada 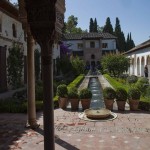 The other end of the patio courtyard in the Generalife, the Alhambra 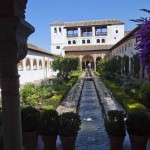 Patio courtyard in the Generalife of the Alhambra 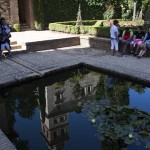 Water and waterlilies at the Alhambra

Pool reflection in the garden of the Alhambra 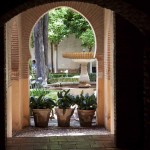 Shadows of Nic & John at the Alhambra 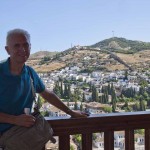 John and the view of Granada from the Alhambra

Nic, and the view of Granada from the Alhambra

Carved wooden column detail in the Palacios Nazaries, the Alhambra

Ornate archway in the Palacios Nazaries, the Alhambra, Granada

Detail of archways in the Palacios Nazaries 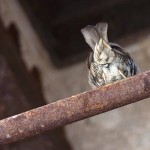 Sparrow’s bottom in the Alhambra 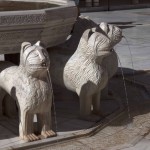 The lion fountain in the middle of the Patio de los Leones, the Alhambra

The vista of Granada from the Alhambra 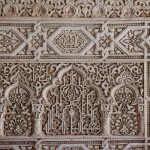 Plasterwork in the Palacios Nazaries, the Alhambra 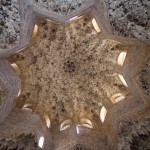 The stalactite-looking ceiling of the Sala de los Abencerrajes, teh Alhambra

Detailed archways in the Palacios Nazaries 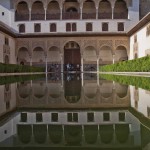 Patio of the Myrtles, Alhambra, Granada 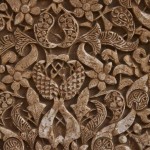 Plaster detail in the Palacios Nazaries, the Alhambra