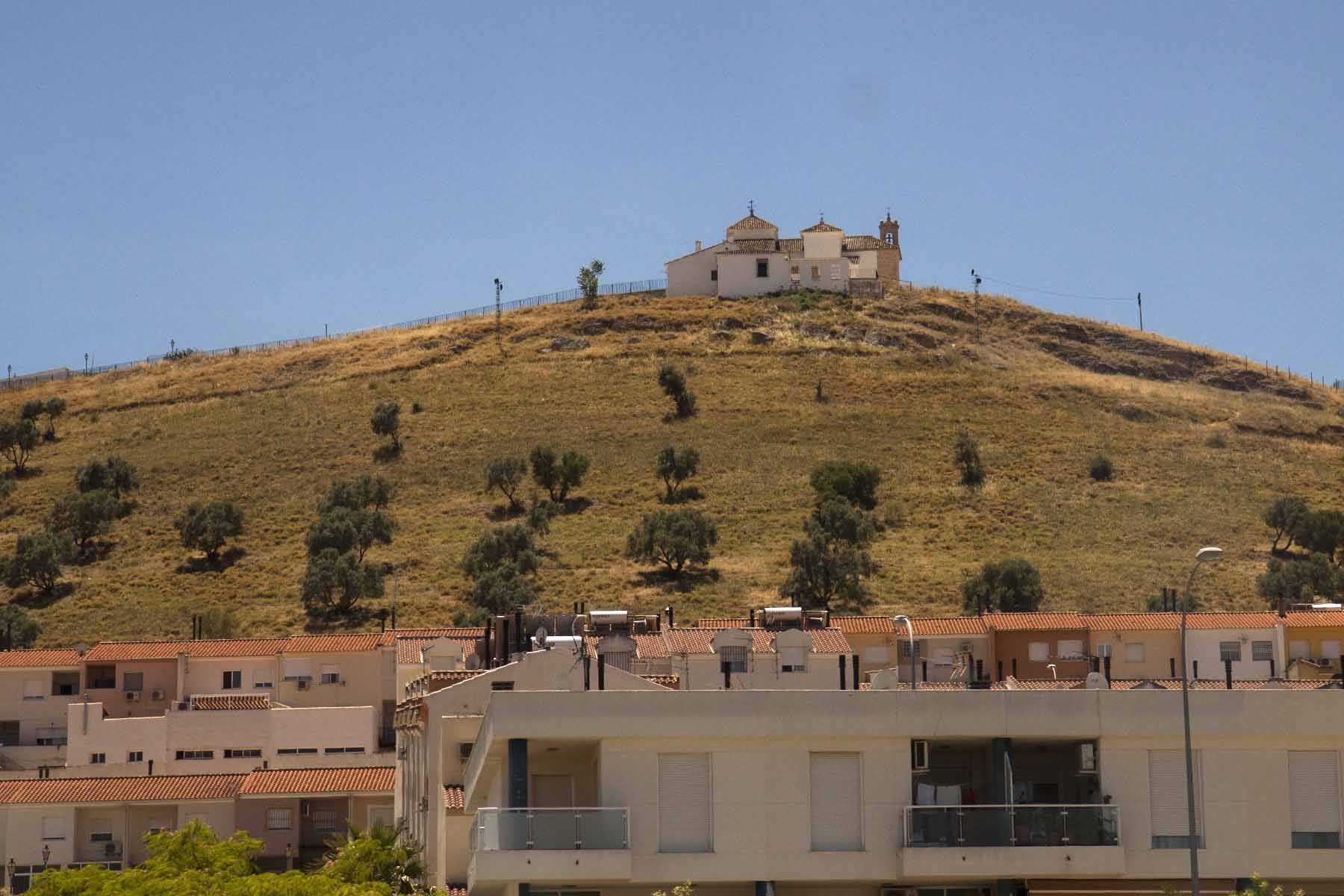 Granada is over a 3 hour train journey from Seville, and we arrived well into the afternoon (missing lunch that we thought would be available for purchase on board – but a vending machine just doesn’t cut it!). Some Aussie boys on the train kept all awake and some amused with their antics, but we just kept our heads down and mouths shut so that no one made any connection of nation between us! They proudly guzzled red wine from plastic cups, and loudly shared their plans to run with the bulls in Pamplona…in thongs…after a few beers! Queenslanders!!

Check in at Casa 1800 Granada was smooth and the hotel was charming – located in a very central spot in the town, in a lovely old casa with much original wood and stone providing atmosphere and beauty. After a cursory look around our digs, we followed the recommendation of Alesandro in reception and found a little place called ‘Carmela’ for a spot of lunch…at 5pm! It was tasty enough – stuffed peppers, vegetable moussaka with the obligatory white wine.

Exploring the area around the hotel confirmed our initial thoughts about its centrality and convenience. We collected our pre-paid tickets for the Alhambra at their official shop near Plaza Nueva, much easier than lining up the following morning with the masses, made all the easier by the assistance of the very cheerful staff helping all with the special ATM that spits out your tickets. We also did a little shopping for some wine for our room, and a subway for breakfast for the next morning – we were leaving early for the Alhambra, and also didn’t want to pay €9.50 each for a continental breakfast.

By the time we meandered back to the hotel, we had missed the complimentary afternoon tea, but enjoyed some time in the open air central patio area with plush wing backed arm chairs and tables, perfect for some relaxation – reading, play cards (like some groups were doing), sipping wine or blogging (as I was attempting to do). Unfortunately, the wifi at this hotel is not as reliable as all of our other hotel experiences in Spain. It is fine to check Facebook, but if you want to do something a little more substantial, like upload a photo to a website, it will not play nicely. After attempting this at various times throughout the day and night, we managed to work out the following day that if I waited until siesta time, I was able to get some work done in that window of opportunity. But this really was the only flaw of this lovely hotel.

After siesta, we walked up the Albaicin area (the historic Jewish area of Granada) to join the masses in the best sunset view of the Alhambra. We steered clear of the crowded square next to San Nicolas, very popular with both tourists and pickpockets (!), and instead chose to be fleeced at an overpriced bar called Huerto de Juan Ranas. But, really, we got to enjoy the views in the comfort of an outdoor terrace with accompanying refreshments of wine and vegetable couscous. Very pleasant. 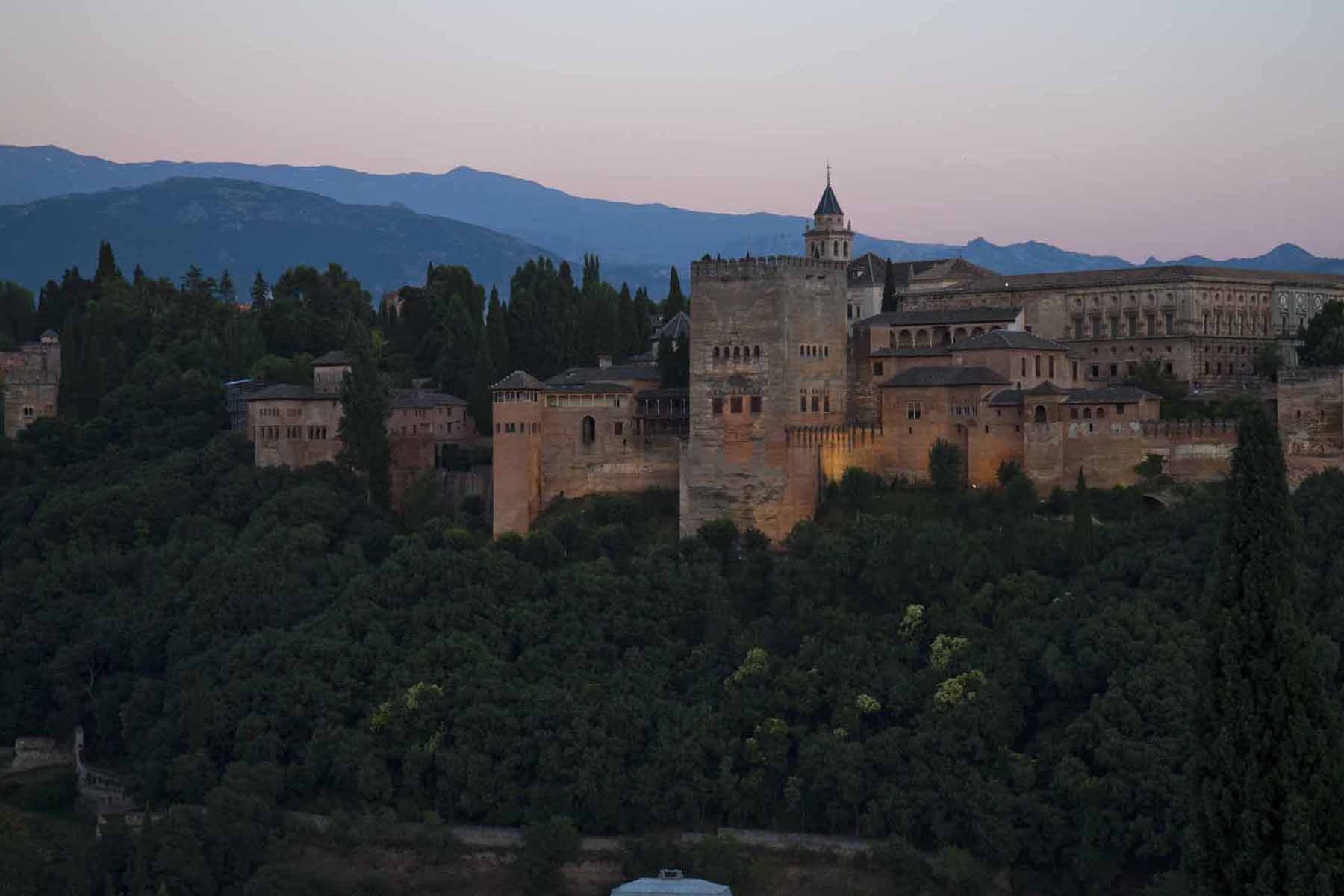 The Alhambra, after dusk, Granada

After the main event, and the pink and orange had faded from the walls of the Alhambra, we wandered back down through the old streets to the river, and walked along Carrera del Darro, once again falling in love with a new city – its gorgeous buildings filled with character, tapas bars with laughing customers, street flamenco performers…all lovely! Looking forward to our next day! 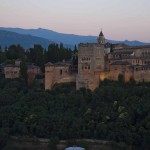 The Alhambra, after dusk, Granada 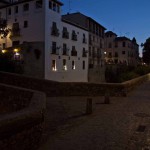 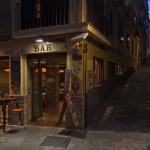 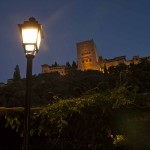 The cobbled streets and lamps of the Albaicin district, Granada 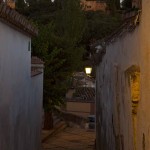 The streets of the Albaicin district, evening, Granada 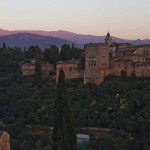 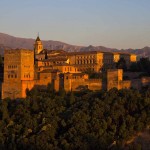 The Alhambra, flaming orange in the sunset, Granada 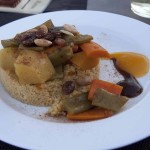 The Alhambra from our terrace bar as the sun sets, Granada 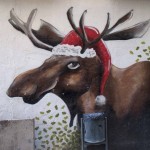 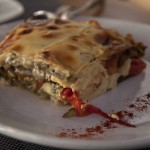 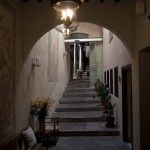 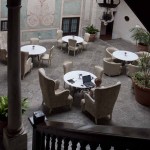 The courtyard of Casa 1800 Granada 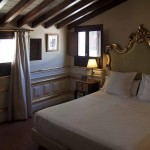 Our bedroom at Casa 1800 Granada 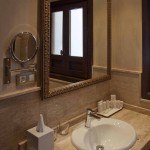 The bathroom of our room at Casa 1800 Granada 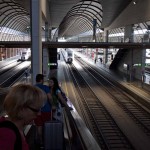