Our last full day in Granada began with a walk along Carrera del Darro and up through the Albaicin, the old Muslim quarter. This area of Granada was declared a UNESCO World Heritage Site in 1994, and while we wandered up on our first day to catch the magnificent view of the Alhambra at sunset, we didn’t really explore.

On leaving the riverbank road and heading uphill, we stumbled across a large garden that was attached to an old palacio that didn’t seem to be in any of the guidebooks, but entry was free and it was nice to wander around. It had the usual Spanish patio with many rooms facing the central courtyard, but none of them appeared to be opened for inspection, so we moved on and up the hill.

Following the Cuesta del Chapiz as it swept in an arc towards the top of the hillside, we found our way to Plaza Larga – full of life and locals and markets. One of the few areas to be bustling and open for business before lunch time, it was a lovely spot to get a feel for this charming city immersed for only moments with its citizens. Heading away from the plaza back towards San Nicolas, we walked through medieval history by way of the Arco de las Pesas – a gateway in the 11th century defensive wall.

Our wanderings took us to Mirador San Nicolas, the premiere viewing spot for the Alhambra at sunset. Even though it was morning, the grifters, artists and musicians were setting up for the day, preparing for the significant amount of traffic that daily visits that spot. We took the obligatory selfie in front of the Alhambra before continuing our stroll past the Albaicin’s first new mosque in 500 years – the Muslim population in Granada is growing again.

A change of scene was definitely in order, so we went back down to the centre of town and visited the Capilla Real where Isabella and Ferdinand are buried. The union of these two royals was pretty important and powerful at the time (15th century), and even now all the currently reigning monarchs of Europe are their descendants. This royal chapel is a truly lovely piece of Christian architecture, modest in size, but not in beauty. The same cannot be said for the adjoining cathedral, which, to be blunt, is quite ugly. Maybe its completion 200 years after it was commissioned had something to do with its mishmash of architectural styles, which miss the mark in many ways.

Lunch was had at Hicuri vegan restaurant. We hadn’t booked, and it was quite small, so we had to wait a small amount of time for a table. The organic wine was very nice, and the avocado salad and Asian vegetable and seitan dish were just what we needed!

We decided that we would like a bottle of bubbles to sip as we worked through the afternoon in the cool patio of the Casa 1800 Granada, but could not find one shop that sold a cold bottle of cava – the sparkling white wine of Spain. We despaired and headed back to our abode for our siesta. When passing the reception, I asked the charming young man on the desk (there’s been a different one every day), where I could obtain a bottle of cava – ‘Why, here!’ was the response, which was unexpected because they didn’t have a bar, as such, but it was a very welcome reply. So after the obligatory nap, we relaxed (and worked) in our now familiar wing-backed chairs amongst the cream, gold and terracotta of the patio, sipping cava chilled to the perfect temperature.

For our final evening in Granada, we decided to return to our restaurant of the night before – Ruta del Azafrán. Once more, we were delighted with all aspects of the meal, and indulged in a kumato tomato caprese salad and a mushroom and truffle risotto. I noticed a stray dog skulking nearby, and as it kept trying to advance into the precinct patrolled by the waiter, he was hunted out again. At the end of the meal, I grabbed my coin purse and went to a local shop, and picked up a ‘reduced for quick sale’ packet of finely sliced meat like prosciutto for €1. The dog must’ve had a sense I was an easy mark, because he wasn’t far away, and built up the courage when I squatted down to his level, to come and have some fancy cold pig. At first he would only take it when I put slices on the ground, but he ended up taking it gently from my hand. So, it was a winner of a night on a number of levels! 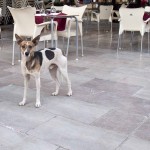 Nic’s 4-legged visitor who she fed for €1 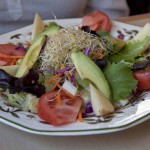 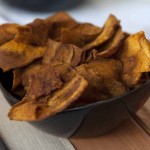 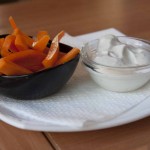 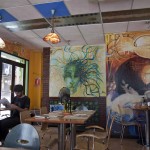 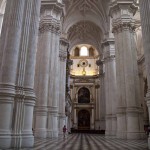 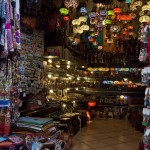 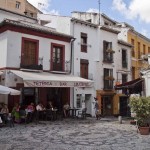 Nic and John – selfie with the Alhambra, Granada 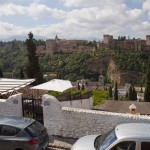 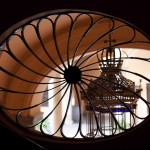 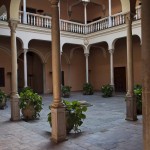 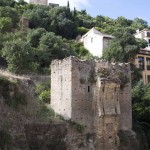