The little tramp as the perfect roller door decoration, Barcelona

Today’s ‘explore-Barcelona’ agenda took us to Montejuïc – the parkland area, home to galleries and stadiums, on the hill south of the city centre. While Gràcia may not be in the centre of the action, its metro line is a major one, and hence very convenient to get most places very quickly. So, hopping off at metro Parallel, we took the funicular to the top of the mountain (after an accidental exiting of the metro, and a kind service officer taking pity on 6 gormless tourists who can’t read signs and letting us back in the metro to actually board the funicular – all inclusive of the metro trip).

The Miró Foundation was on the list of 6 galleries included in the ArTicket Barcleona, and was as good a place as any to purchase said ticket (fewer lines) and begin our gallery visits. This gallery is dedicated to the work of Joan Miró – one of the greatest artists from Barcelona in the 20th Century – and holds the largest single collection of the artist’s work. 220 paintings, 180 sculptures, some textiles and more than 8,000 drawings…but only a small number are on display at any one time. The charting of his development as an artist through the works was very educational and interesting.

From there we ambled through formal gardens and less manicured parklands, following a noise in the distance. Before we knew it, the distant thrum had grown into the screams of thousands of tweens and teens lining up for a One Direction concert at the stadium. Nice to see the universal insanity for a boy band transcends nation.

Revelling in the fact that none of us were that age…or the parents of anyone that age…we walked on to the old palace, now the home of the Museum of National Art of Catalunya. We looked down on the Magic Fountains from Mount Montejuïc, and planned to return the following evening to see them all lit up, and, well…magical! Apparently, it is quite a show.

Caught the cable car down to San Sebastian and our friends had a swim in the ocean while John and I read our books and drank incredibly ordinary wine (that tasted watered down!), and snacked on some even more ordinary grilled asparagus (tasted like it had been sitting in a bain-marie for some time), and some slightly better than ordinary potatas bravas (difficult to stuff that dish up!).

What was left of the afternoon was spent shopping in the area near Passeig de Gràcia – buying chocolate from Cacao Sampaka (a MUST for chocoholics!), attempting to buy perfume (but they didn’t stock Salvador Dali!!), and buying dresses in Desigual. Overall, time well spent!

Walking back to the apartment along La Rambla we were about to pass the Casa Batlló (which we visited yesterday), when we saw an open door to an intriguing, geometric building right next door. We poked our heads in, and were invited to enter by a well-dressed older gentleman. In Spanish and mime, he encouraged us to explore the stunning foyer and take photographs. There was an exquisite stained glass skylight at the top of the lightwell of the staircase. We had no words, just breath and sighs and big smiles. As we left, the old man nodded and grinned, and we thanked him profusely. Serendipity at its best! We had no idea that this was Casa Amatller, designed by Cadafalch, one of the important Modernisme buildings in Barcelona. It is still undergoing extensive renovation and areas beyond the foyer and stairwell will open to the public soon. Will have to return to Barcelona when it is done!

To top the day off, our temporary flatmates had cooked us all a superb seafood feast – including razor clams (which we’d never had – delicious!), and Bollinger. Too much bubbly was spilt instead of going into our mouths, and scampi corpses splattered us, the floor and walls, as they were pounded with a wooden mallet. Much eating, drinking, laughter and an interpretive dance later, we called it a night. And it was an outstanding one at that! 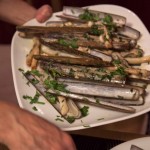 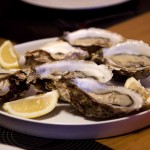 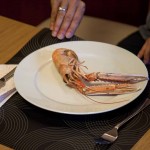 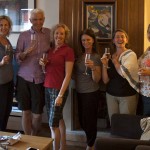 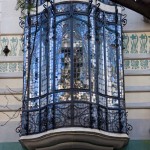 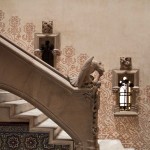 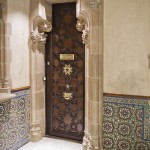 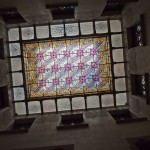 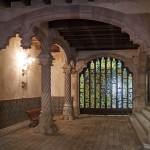 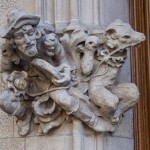 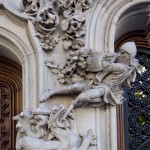 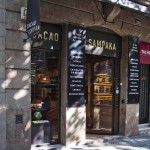 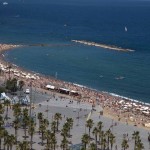 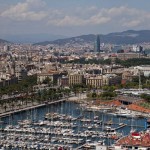 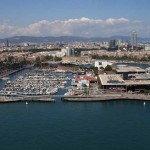 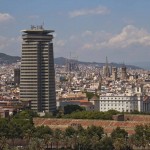 La Sagrada Familia from the cable car to Barceloneta 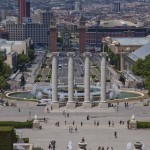 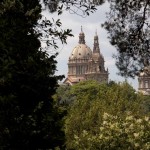 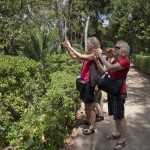 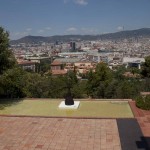 View of Barcelona from the Miró Foundation 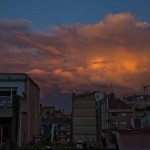 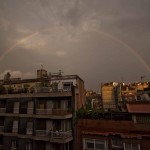 Rainbow view from our apartment in Gràcia, Barcelona 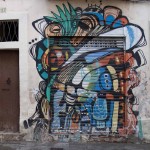 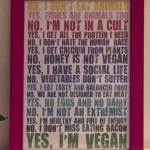 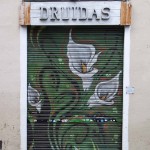 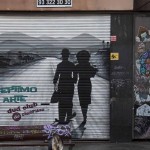 The little tramp as the perfect roller door decoration, Barcelona