Tickets to Sagrada Familia were booked and prepaid well in advance on good advice but the day itself turned out extremely unhelpful with gusting downpours and thunder that closed the access to the towers. We were promised a refund for that part of the tour so that was good, but experiencing this building then became something akin to exploring a huge cavern with hundreds of others in their clusters and with lenses and flashes and dampness.

La Sagrada familia, a steroidal growth in a city block in Barcelona, is difficult to explain because it’s difficult to find anything to compare it to, except perhaps other buildings that bear the mark of Gaudi’s style. His other buildings in Barcelona are extraordinary but essentially functional to suit the needs of day to day living. This cathedral takes a medieval concept of public worship and takes it into a future world via the Garden of Eden. Once inside this colossus of a cave, one is surrounded by stone tree trunks of a massive scale that branch and blossom into the stone sky in a filigree of organic tracery. A forest of worship. Everything flows and grows and emerges as if alive. In a similar way that a statue can capture the movement of a person in mid-flight, this building captures the forest at a moment in time of its development. This building defies photography despite being infinitely photogenic. Details always yield beauty as you expect nature to provide but it takes time and simply gazing and ‘drinking it all in’.

The great surprise of this building, however, lies beneath the main cathedral where the concept, philosophy and design are displayed in many smaller rooms with models and explanations. The backstory of this performance in stone is at least as intriguing as the end result (though the cathedral is still well short of being completed with its huge central tower yet to be built). In the crypt you could see drawings and models that showed the progression in thinking and the ideas that eventually led to what you could see upstairs. Unfortunately you could only enter the crypt by an outside entrance which was a problem in the windy downpour.

After our visit to the basilica, our little umbrellas only just survived the elements helping us get to the subway for a train. We grabbed some snacky, breakfast type food at a café near the flat before heading ‘home’ to get warm and dry – this was not the usual weather pattern of Barcelona for this time of year but it made the day very special and memorable for its disagreeableness.

Rested and motivated again, we headed out in the afternoon to another Gaudí gem in the UNESCO collection, Casa Batlló. This quirky, shiny, fluid building looks more like a surrealist painting than the apartment block it was – no straight lines anywhere! The double light well on either side of the lift shaft was genius – bringing welcome brightness into the core of the building and giving a sense of being underwater; the glossy tiles lining all surfaces increase in the intensity of their blue as you rise to the top. This whimsical structure was an instant favourite. If it wasn’t for the constant steam of tourists I could probably live here quite happily.

For our evening meal we sourced provisions from various shops in our little neighbourhood of Gràcia to make our group a vegetarian feast  – complete with fabulous concoctions from a vegan deli, several savoury pastries, salads and some mouth-watering pan-fried asparagus. We spent the evening in convivial wining and discussing options for the next day. 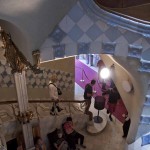 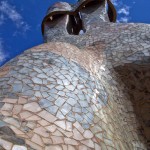 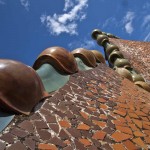 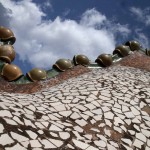 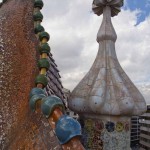 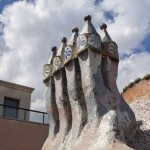 Chimney pots on the roof of Casa Batlló 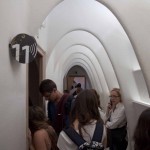 The funky service corridor of the attic laundry, Casa Batlló 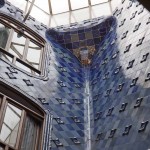 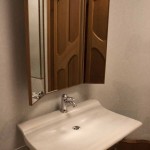 Hand basin in the bathroom of Casa Batlló 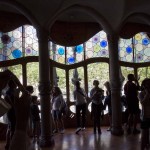 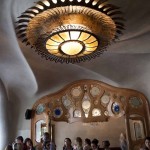 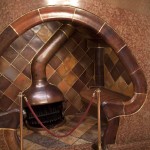 Fireplace in apartment in Casa Batlló, complete with sitting nooks 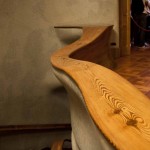 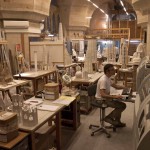 Model workshop in the basement of La Sagrada Familia 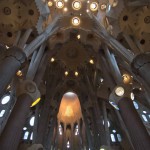 The ceiling of La Sagrada Familia 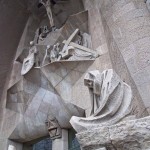 The crucifixion of the Passion Facade of La Sagrada Familia 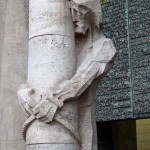 Jesus statue at the entrance of the Passion Facade, La Sagrada Familia 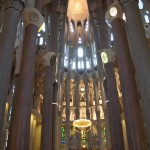 The ‘Forest of Worship’ of La Sagrada Familia 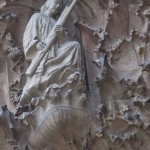 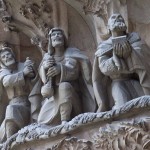 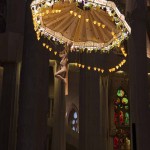 Jesus with well-lit parachute, flying into the sanctuary above the altar 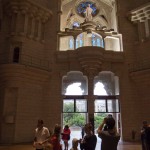 Entrance to La Sagrada Familia on the Nativity side 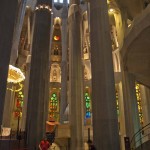