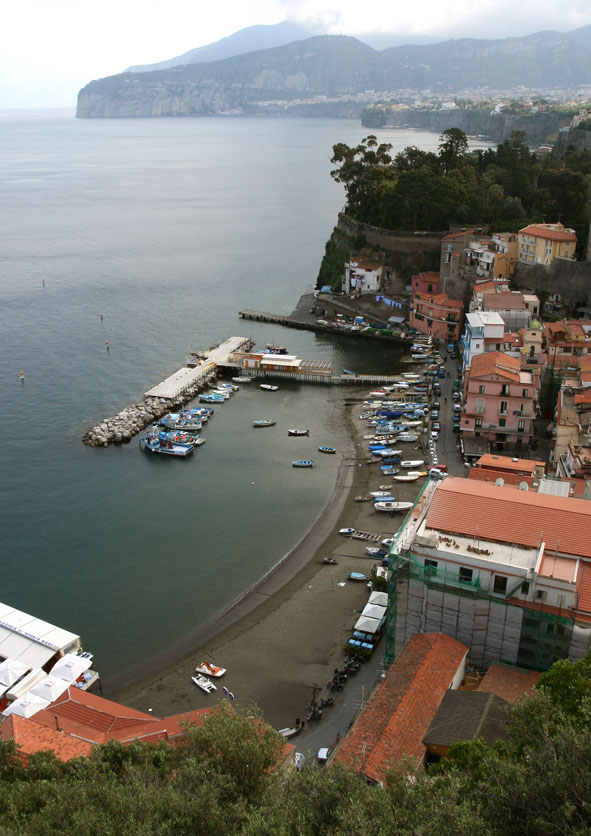 Sorrento – looking down at Marina Grande 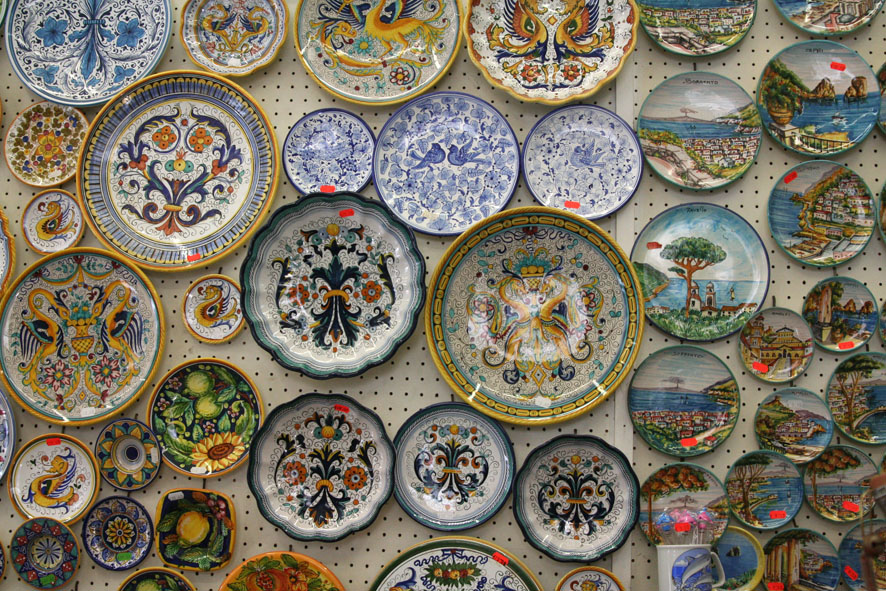 So many shops selling ceramics

Had a delightful day just enjoying Sorrento, wandering the streets, checking out the tacky tourist shops (which are in the most beautiful side streets!) and then finding some true locals and lovely restaurants a few streets off the main stretch. 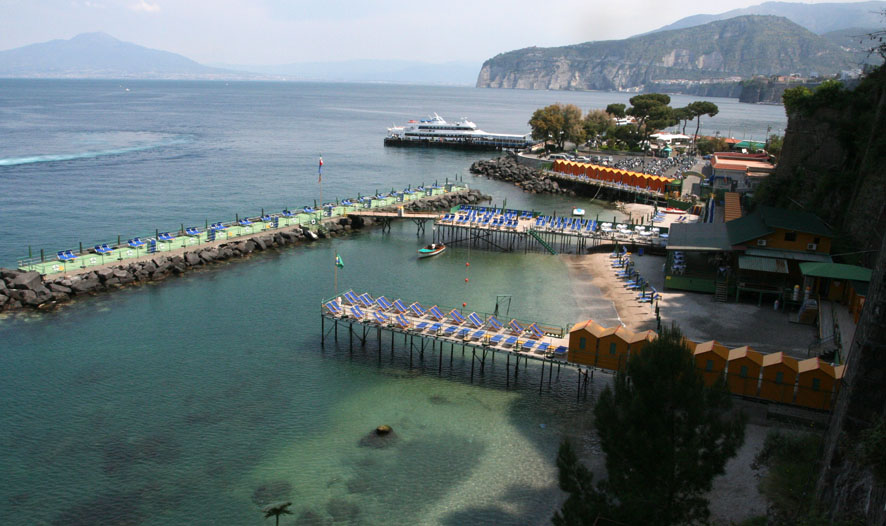 Walked down to Marina Piccolo where the boats arrive from/leave to Napoli, Capri, Positano, Amalfi etc. Stretched our legs along the shore looking close up at the private beaches and their ‘outfits’ – the fancy sun lounges, the pontoons with slippery dips on them, the umbrella drinks and fancy snacks – might pretend to be rich and ‘check-in’ to one of these for some pampering before we go! 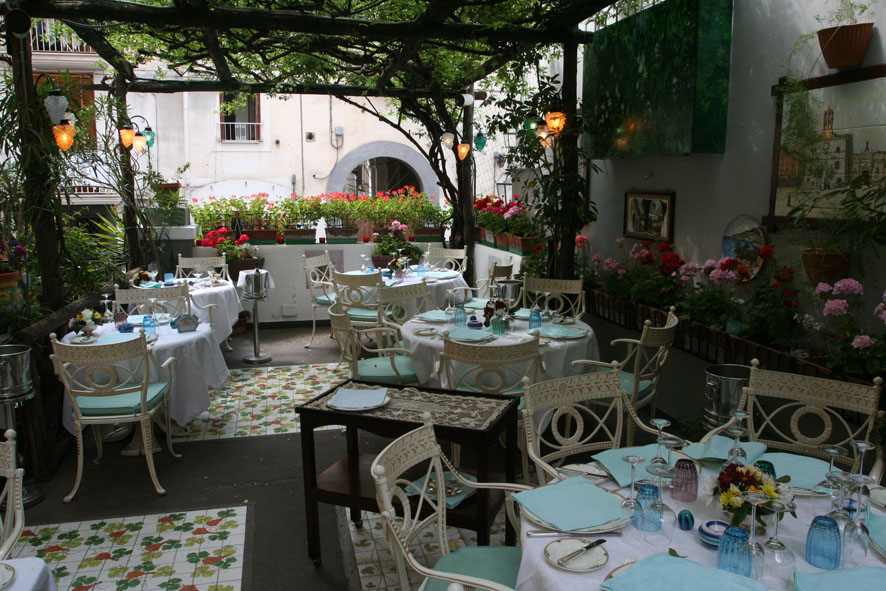 Welcoming Americans…we did not eat here

Climbed back up to town level for some lunch at one of the most delightful restaurants we have been to so far on the trip (and had, probably the best meal). The restaurant was L’Antica Trattoria and it is more for a splurge dinner than a lunch, but we decided to try the lunch and we were thrilled with the result. Firstly, we were nearly the only people there so the attention we received could not be faulted. A complimentary champagne to begin the meal and some tuna mousse on mini toasts. Our €18 ‘light lunch’ menu consisted of the following (in perfect smallish servings – which allows for the indulgence of a number of dishes!): deep-fried courgette flowers (zucchini flowers), followed by handmade seafood filled ravioli, then salad, then lemon delice (the lightest, most luscious lemon cake). Our waiter was so sweet that he added some complimentary tiny cake and chocolate selections to go with coffee afterwards. I think we will have to go there again before we leave. Our mission is to discover more little gems like this restaurant in the days left (and doing lunch instead of dinner is a bargain!) 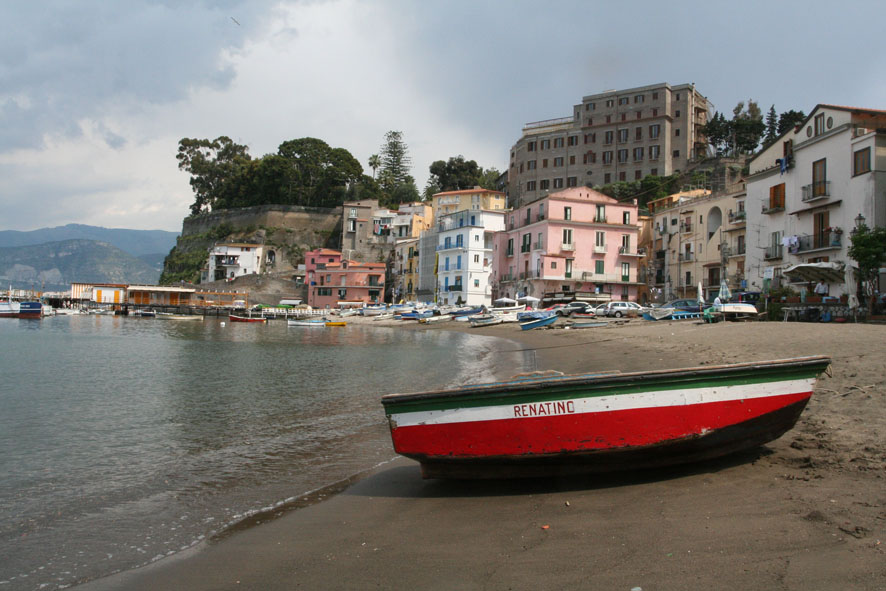 After this we walked down more steps to the Marina Grande which is really like a whole other town, completely separate to the rest of Sorrento (and I think the locals like it like that!). We watched two different weddings unfolding on the piers below us as we descended – one, a lone couple, both wearing black pants, she with some gorgeous, chiffony-type latte top, he with a casual open necked shirt, both looking so stunning and stylish!; the other the full cream duchess satin number, train, veil and deep red accessories, and beaming family members running after them throwing rice. Congratulated both brides as they prepared for their photo poses who giggled their thanks with beautiful smiles. 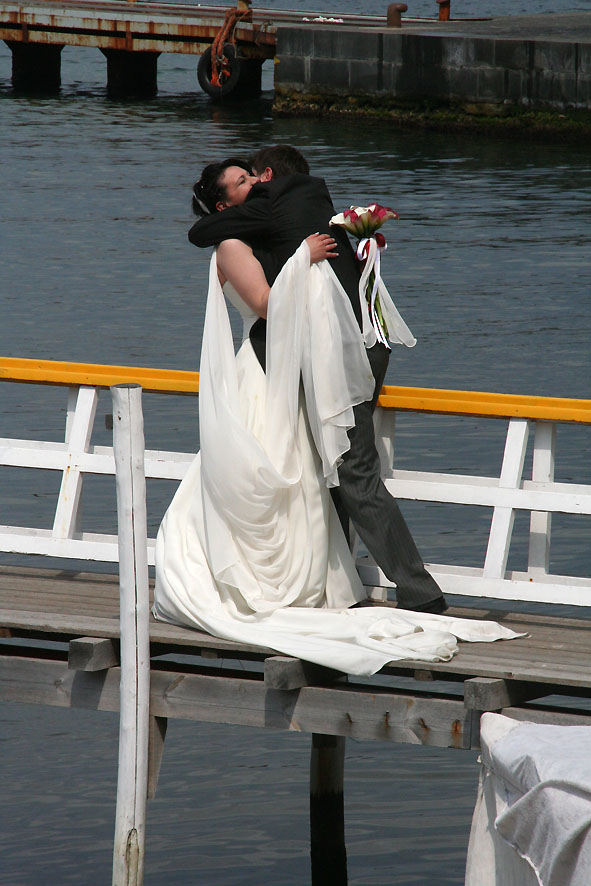 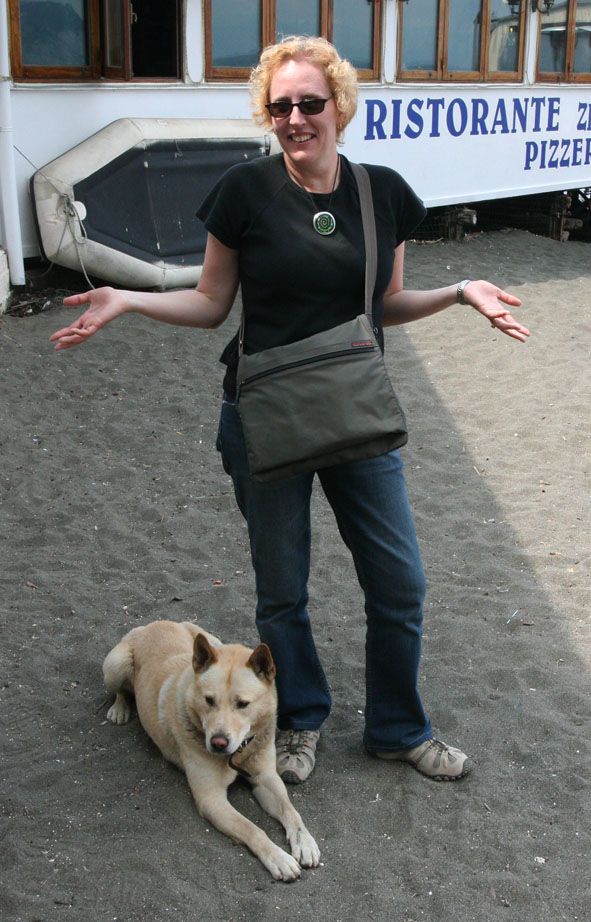 Noble beast…the one laying on the sand!

On the beach at Marina Grande, Nic made friends with this dog, and when she stopped walking along, he lay at her feet. Happy fellow he was too.

The view of Vesuvius from our balcony 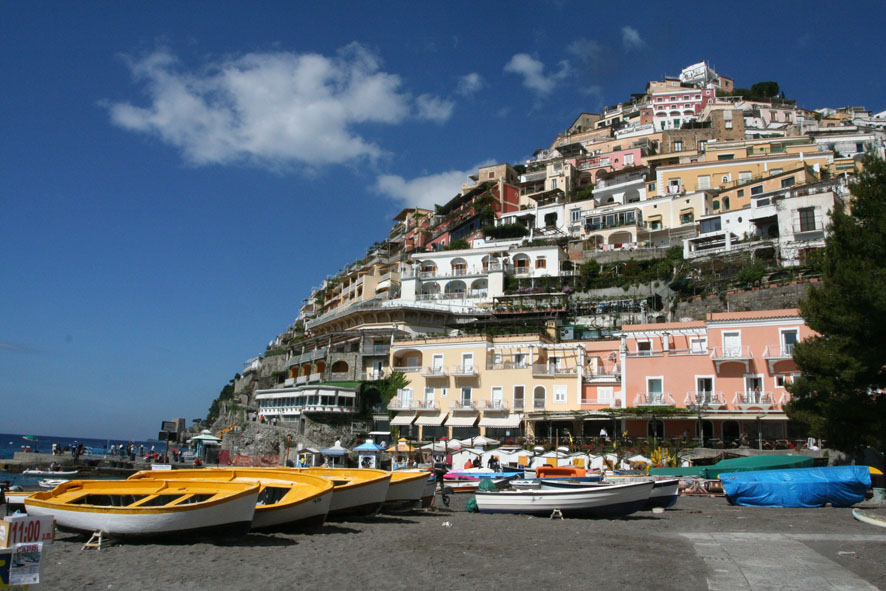 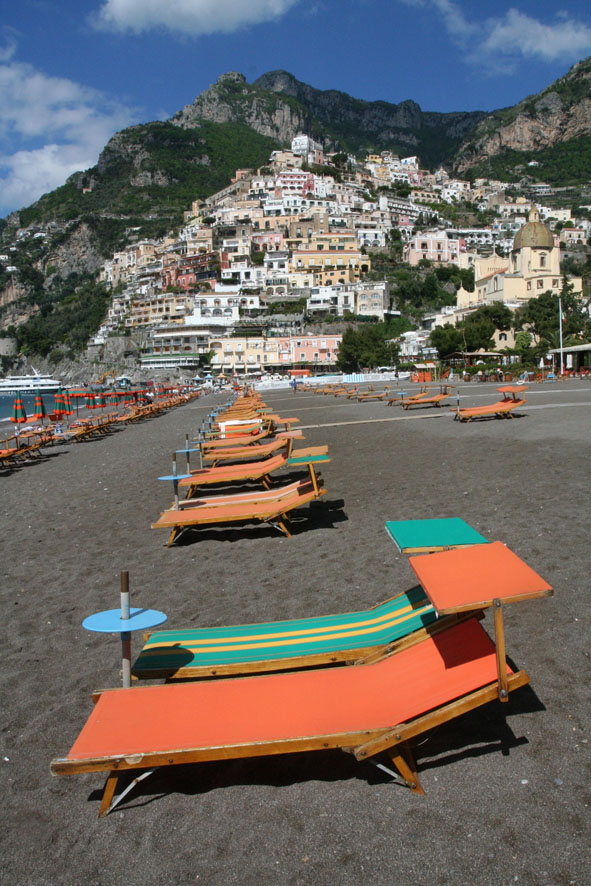 The next day we arose prepared to do the trip to Capri, planning on catching the ‘early’ 8:25am hydrofoil. Ha! Could hardly move on the wharf area and missed the boat cause we couldn’t find the ticket booth in time. Got freaked out by the crowds and decided, instead, to pop over to Positano. Not quite the same crowds, but still a little intense. Didn’t stay too long in Positano, but enough time to enjoy some of the beauty of the place. Stunning skyline that will not change (due to strict building regulations!). 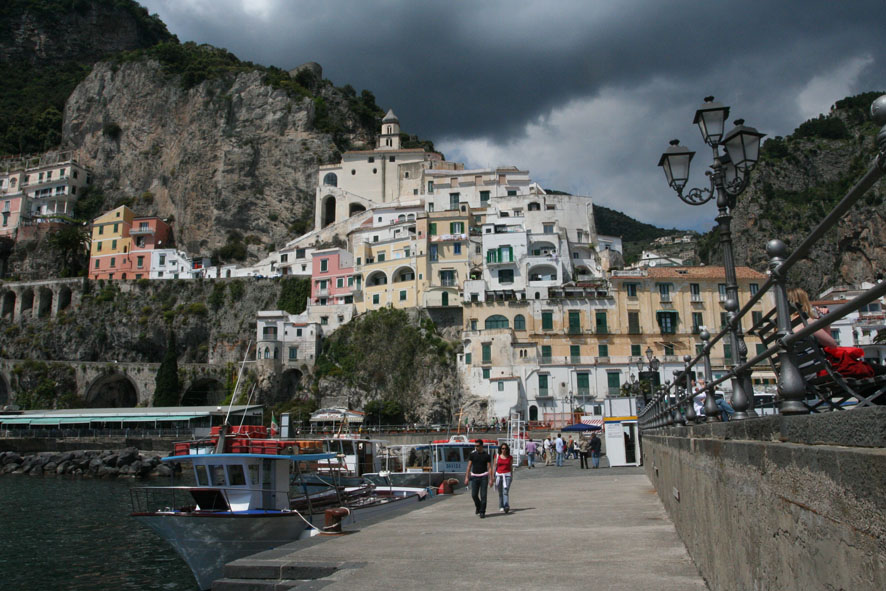 From there decided to bus it to Amalfi for lunch. Interesting experience. Not a fan of the bus trip at the best of times. Only 18 kilometres, but the longest 18k’s of our lives! Very crowded bus, filled mainly with school girls from Napoli on an excursion (there are an amazing amount of school kids on excursion at every place we have been to!). There was one girl in particular, very vivacious and charming, who was determined to entertain us and her friends and, of course, herself (!) by engaging us in conversation in broken English, which inevitably failed at which point she would burst into song. Highly amusing, if a little tiring – just like being on own school excursion. 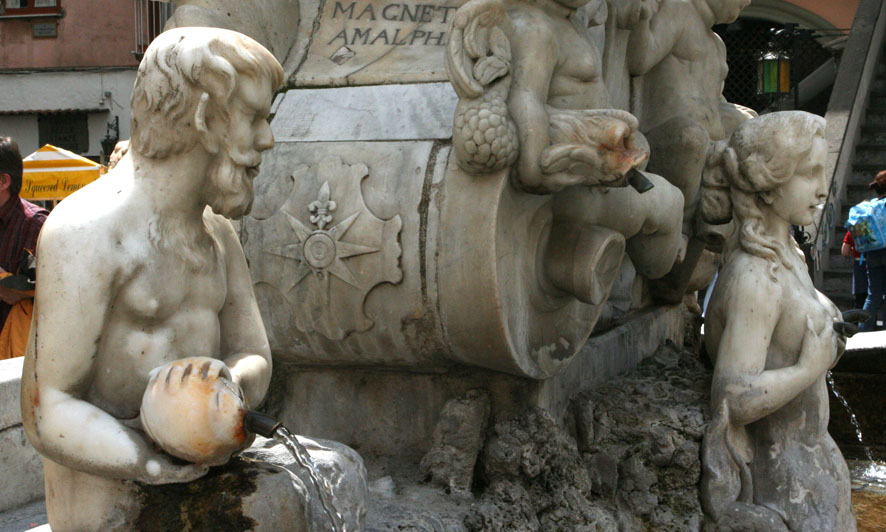 Dude in fountain copping a perve

Arrived at Amalfi just in time (to stop Nic being sick on the bus!). There were at least 10 other buses and coaches parked at the Marina and a great sea of people burst forth battering the walls of the city and flowing through the arches into the town square, pushing up the first street and dribbling into various shops ready to spend their money. The tide eventually dissipated – shops, restaurants, galleries, and the church managing to hold the vast quantities of people and for a moment, the street was still, waiting for the next tidal wave to batter its cobbles. It felt a little like being swept along with the bull-runners at Pamplona, only a lot slower and, probably, less dangerous. 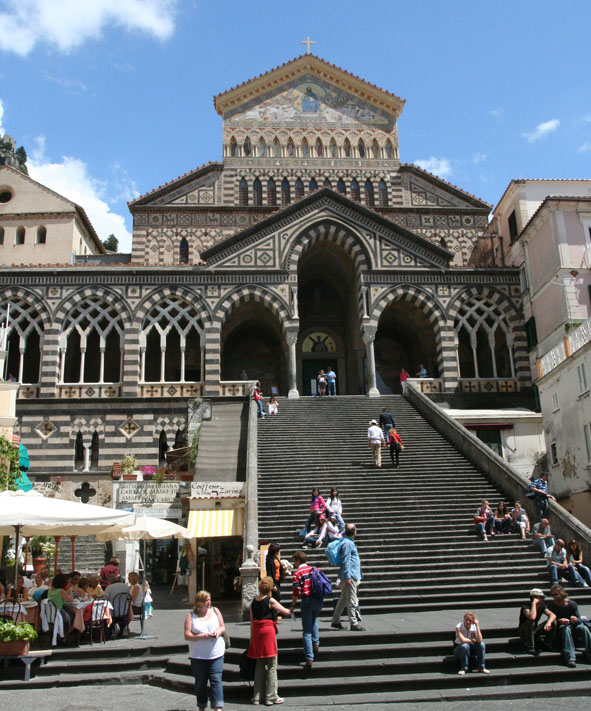 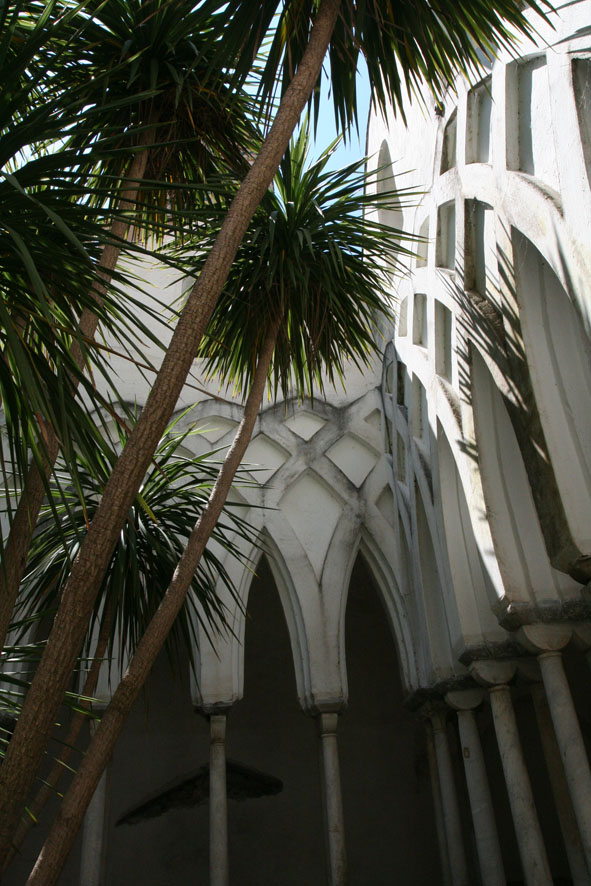 The Cathedral in Amalfi town was very impressive. It is “Amalfi Romanesque” (a mix of Moorish and Byzantine flavour) and it houses the remains of the first disciple, St Andrew, in its crypt. And a pretty flash crypt it is too!

After this we decided we had had enough of crowds and just wanted to go back to our current ‘home’, Sorrento. We had planned on catching the bus to Ravello, but when we saw the crowds for that and took into account Nic’s upset tum, we scratched it (sorry Brian and Jo!). Something for next time! 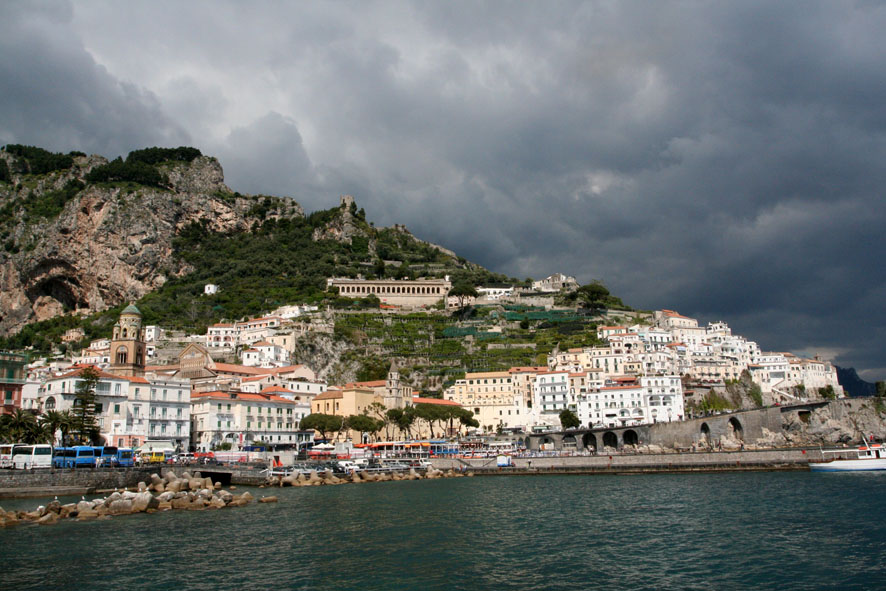 Caught the boat back (there was absolutely no way Nic was getting on another bus that day!) and thoroughly enjoyed the ride standing on the back of the jet boat looking for Sophia Loren’s house on the coast – we think we saw it cause we saw an old Italian man with love in his eyes pointing and saying her name (*sigh*). 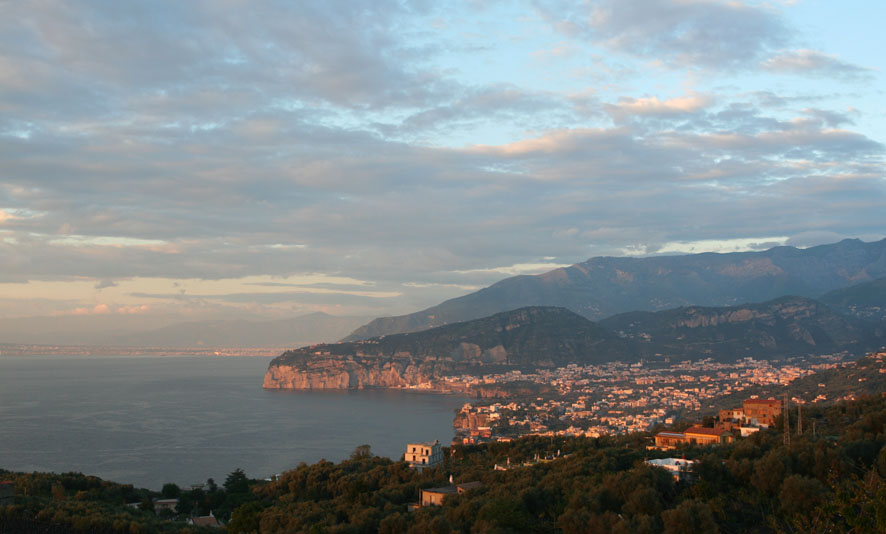 The view from our hotel of Sorrento may be becoming tedious for you, but it’s not for us! 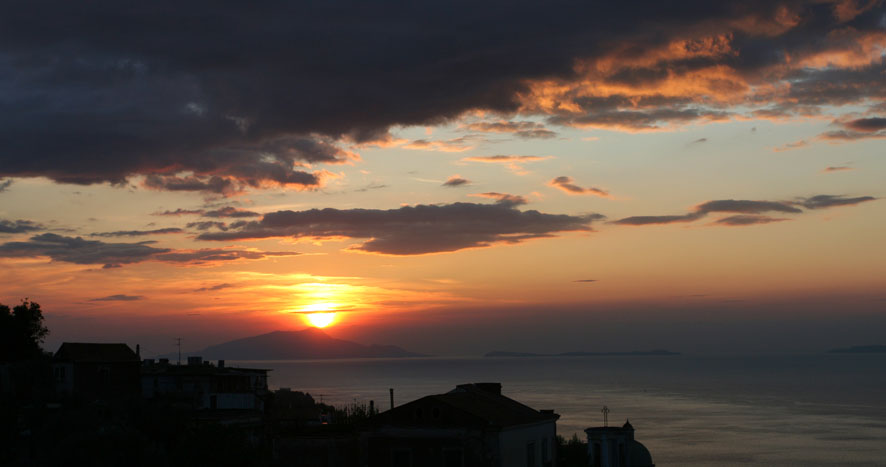