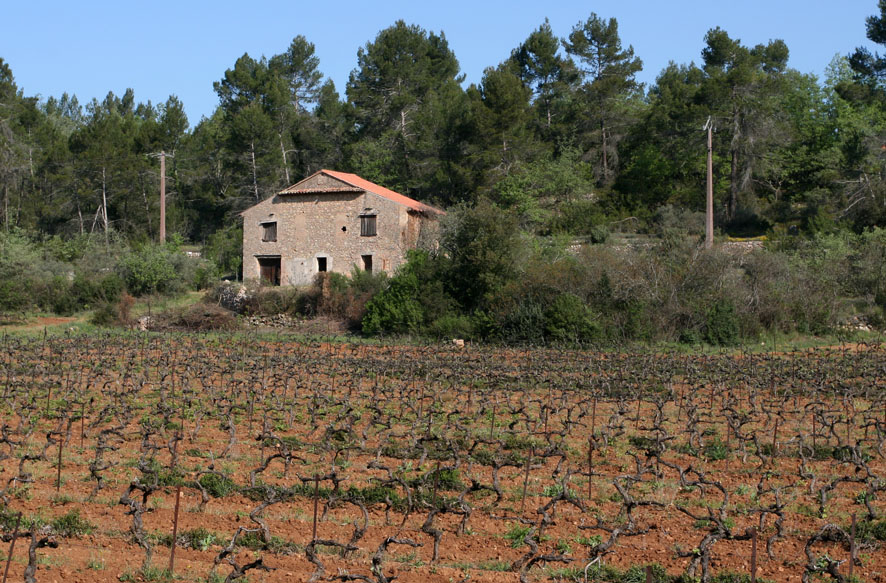 Now, yes, the beginning of this post is not Sorrento, but it’s on our WAY to Sorrento, so bear with us!

Our last day in France was spent mainly travelling leisurely from Cassis to Nice via the lesser roads (not the autoroute) which gave us the perfect opportunity to drive through many a gorgeous French town. 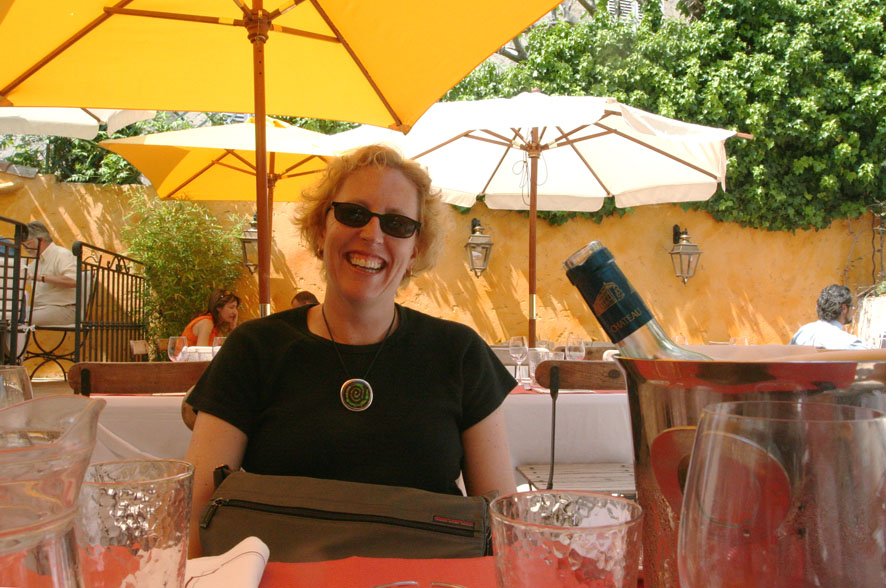 Stopped in Antibes for lunch – another lovely seaside town without the crowds and hype of Nice. 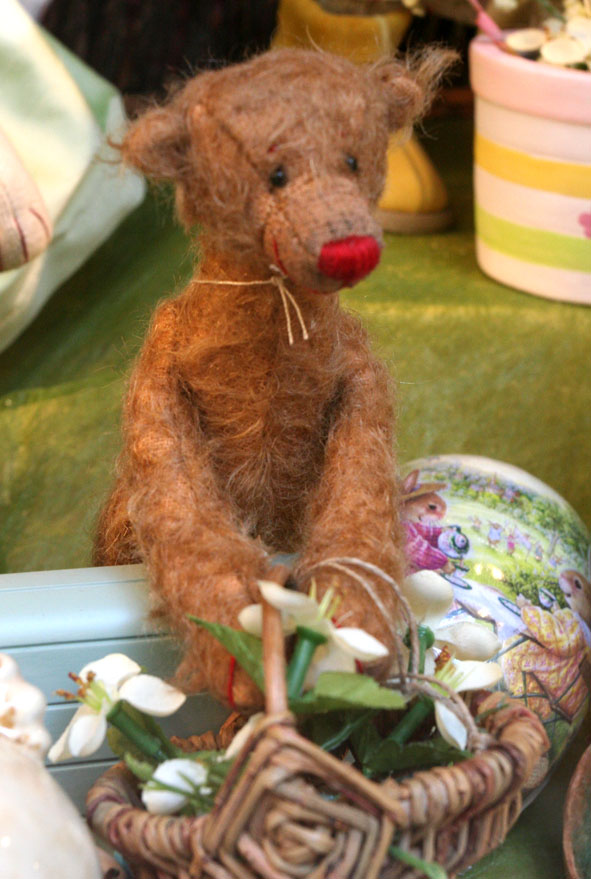 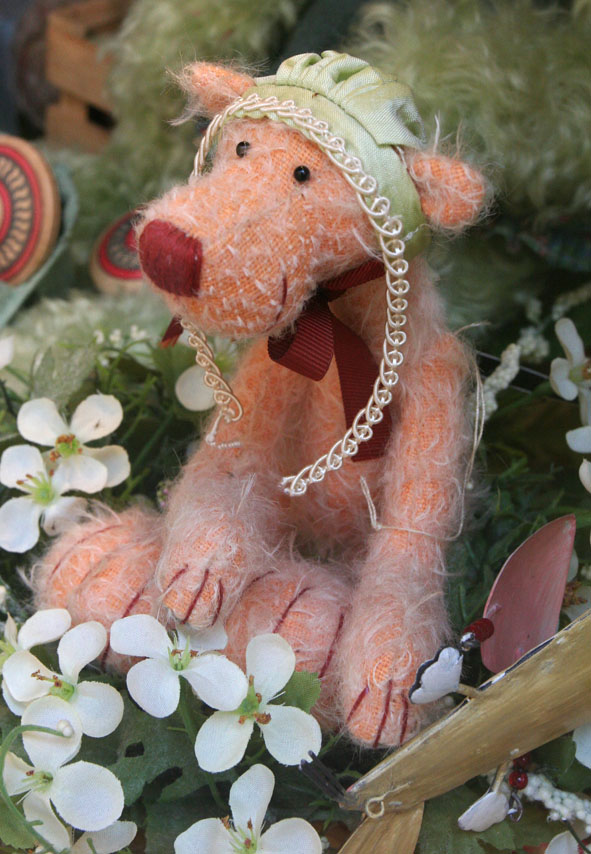 You cannot BELIEVE how disappointing it was not to have this toyshop in Antibes open when we were there! These bears were sadly in need of a loving home! (And there are many we know who could give them one!)

The outer wall of Antibes 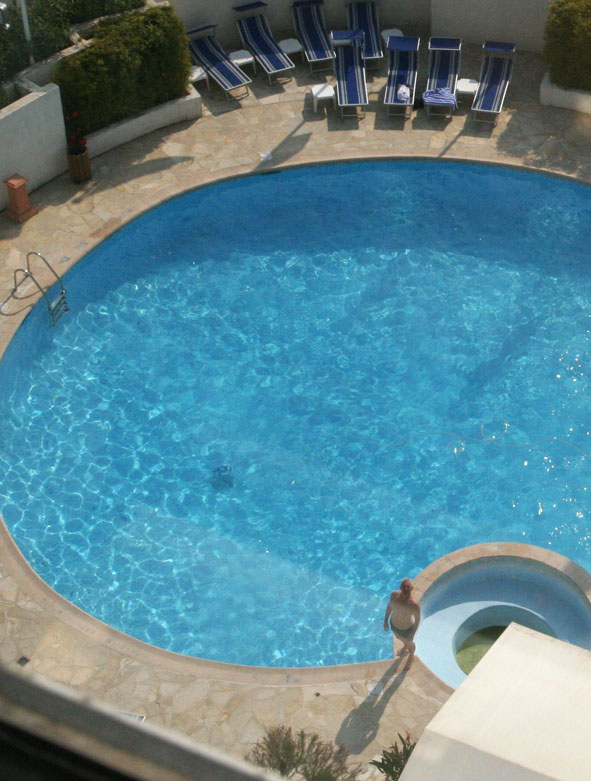 John after his swim in the hotel pool in Nice – Nic thought it was too cold!

Stayed the night literally across the road from the airport which was very convenient for our 7am flight.

Arrived in Naples late morning (via Munich) and hopped straight on a bus to Sorrento. Didn’t even want to think about tackling Naples with our luggage. It was a shock to the system coming from the beauty and affluence of the south of France to the quite poor area between Naples and Sorrento. Some areas were very dirty, slum-like in appearance, even small pockets that looked like shanty-towns with their corrugated iron shacks. We started to get a little concerned when time passing and kilometres travelled didn’t really alleviate the graffiti-covered walls and housing-commission style highrises. Finally caught glimpses of the ocean between the washing flapping from balconies and the screaming vespas dodging tour coaches. 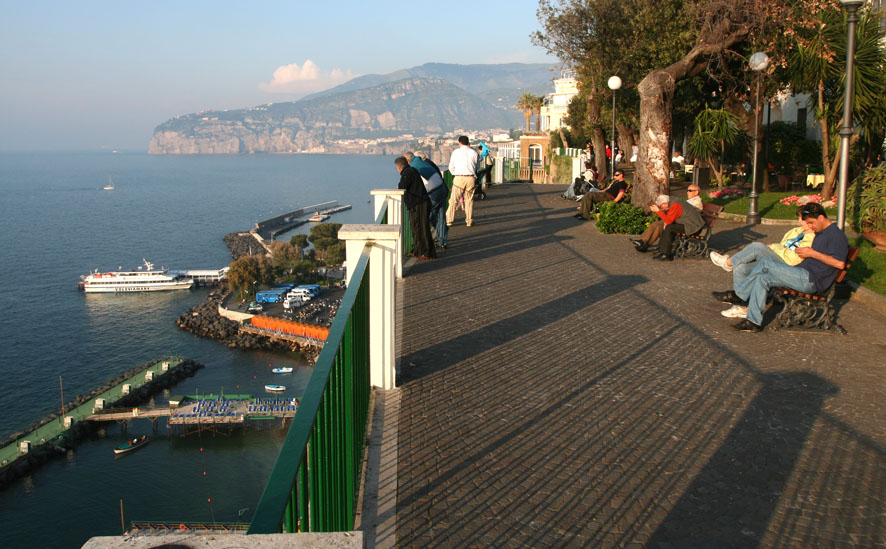 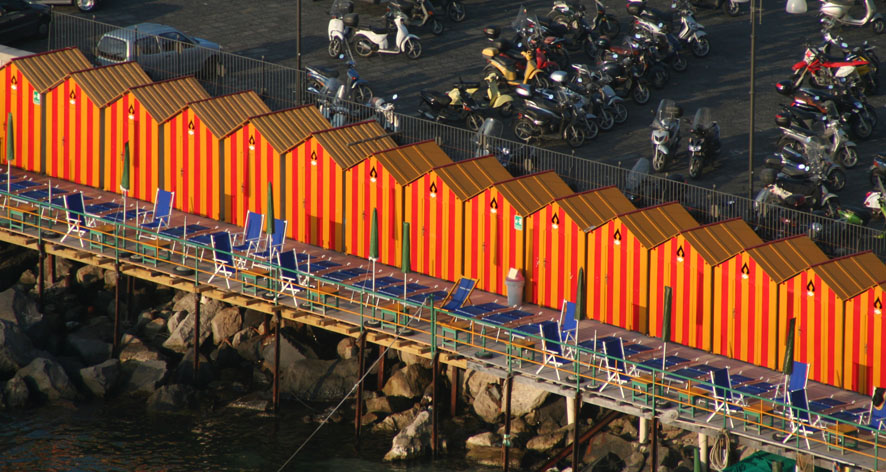 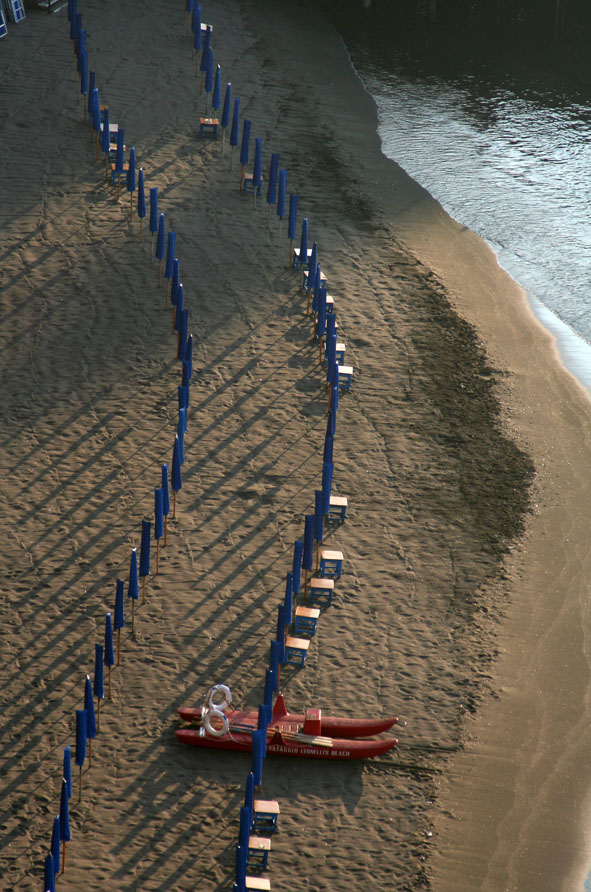 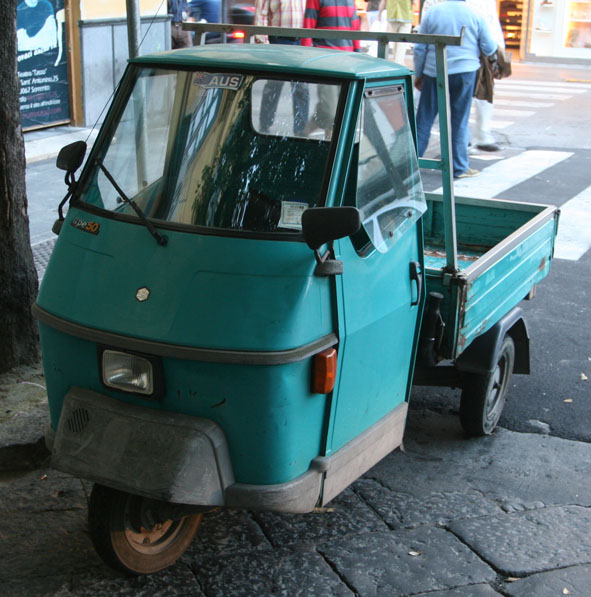 Sorrento is a happening place. It’s geared for tourists so most of the shopkeepers, waiters, souvenir-peddlers have good English. In fact, the majority of the tourists seem to be Americans (with a few Aussies, Poms, Germans, and Kiwis thrown in to spice things up). The main square, Piazza Tasso is a roaring, atmospheric cauldron of vehicles and pedestrians, neither caring much who has right of way, but very few getting huffy about having to wait for the other who got there first. Scooters are mosquitos that dart in and out of cars and buses, freaky in their brazen flouting of common sense and caution. They do have that warning buzz, just like when the bloody mozzie is coming in for the strike as you are drifting off to sleep at night and you swat at it blindly in the dark. We have seen so many different types of drivers and passengers on these little gnats. A favourite was the one with a little mutt balancing between his two owners having the time of his life, hanging on, tongue flapping in the breeze. The one with mum and kids was pretty cool too. 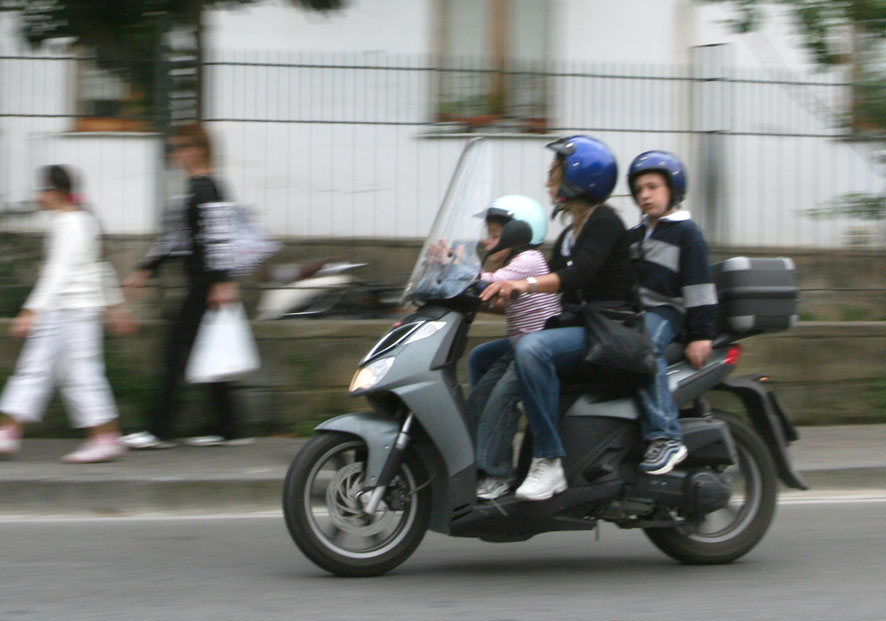 Mum and kids on vespa 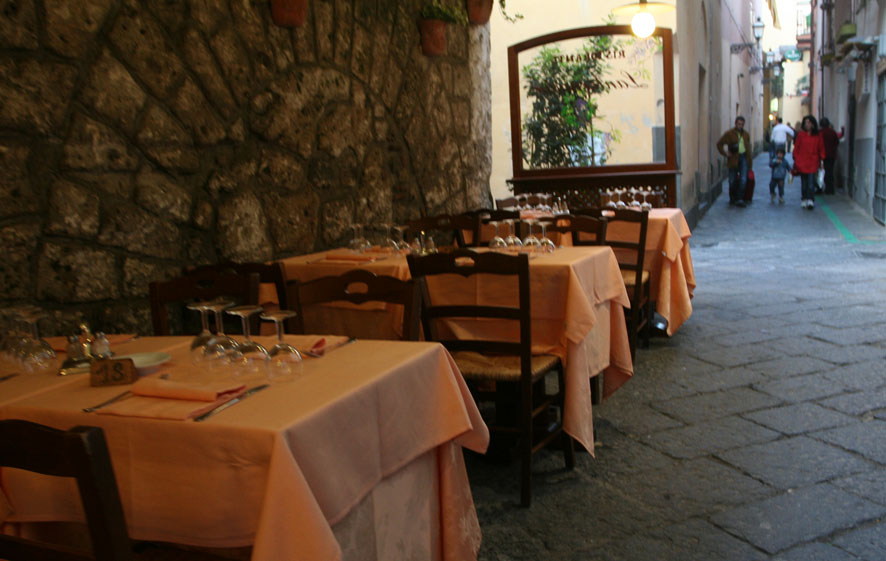 Our hotel, Il Nido, is 5km out of Sorrento on a hilltop overlooking the bay of Naples, Sorrento and Vesuvius (when it’s not hidden by pollution!). There is a free shuttle bus that takes us into town and picks us up, so the out-of-town thing really isn’t a problem. In fact, it’s a blessing being away from the noise and having the most wonderful views to stare dreamily at while sipping wine in the afternoon before popping up to the terrace restaurant (or ristorante – we are in Italy now) for the best value meal in town. 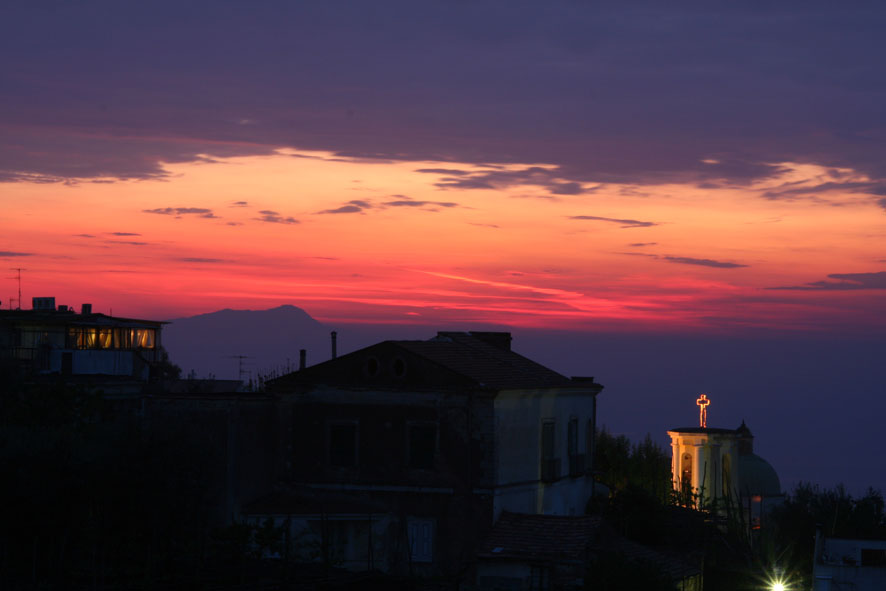 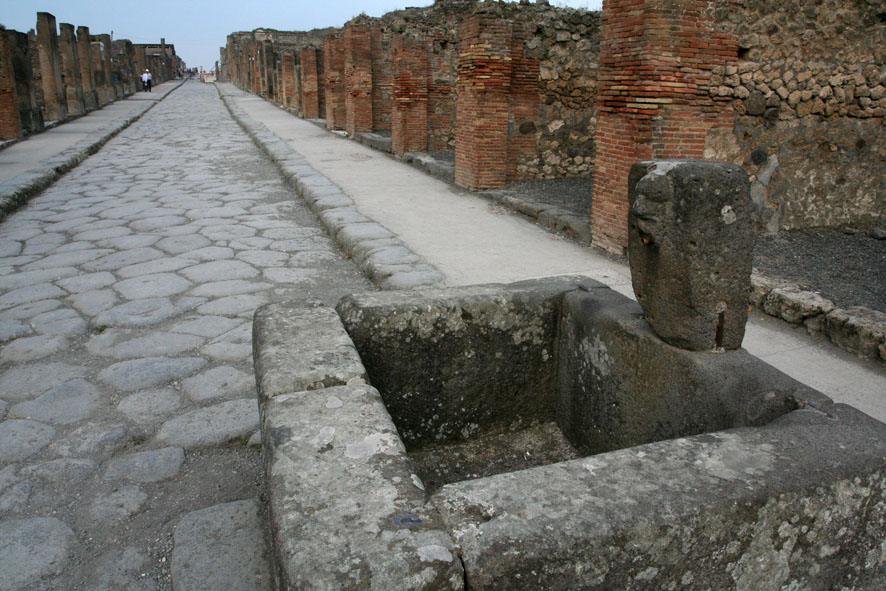 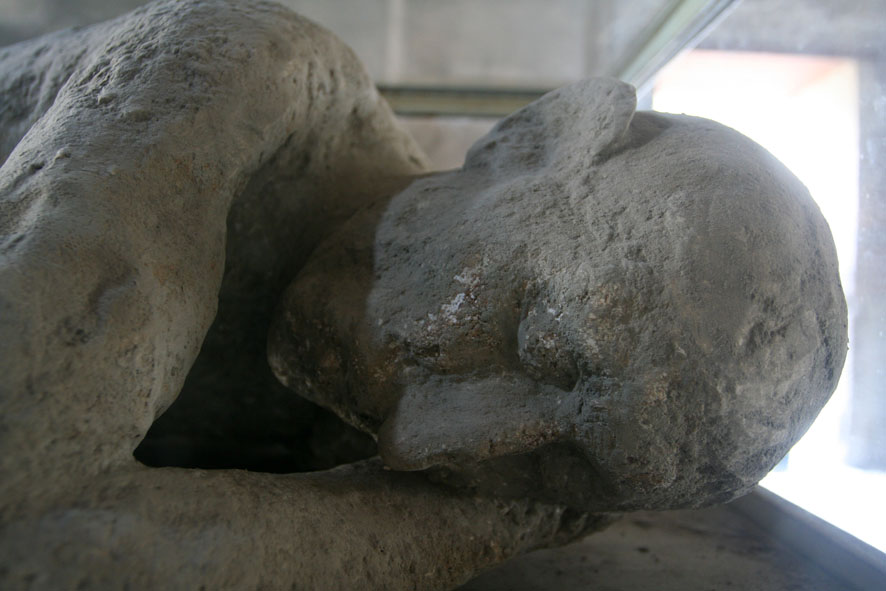 Plaster cast of victim of Vesuvius

Went to Pompeii and Herculaneum the following day. It was a very big day, indeed! Caught the Circumvesuviana train at 8:26am and tried to get to Pompeii early to beat some crowds, which worked till about 10am, then it was on! Gigantic tour groups everywhere, even a bit of jostling going on if they thought you weren’t getting out of their way fast enough. 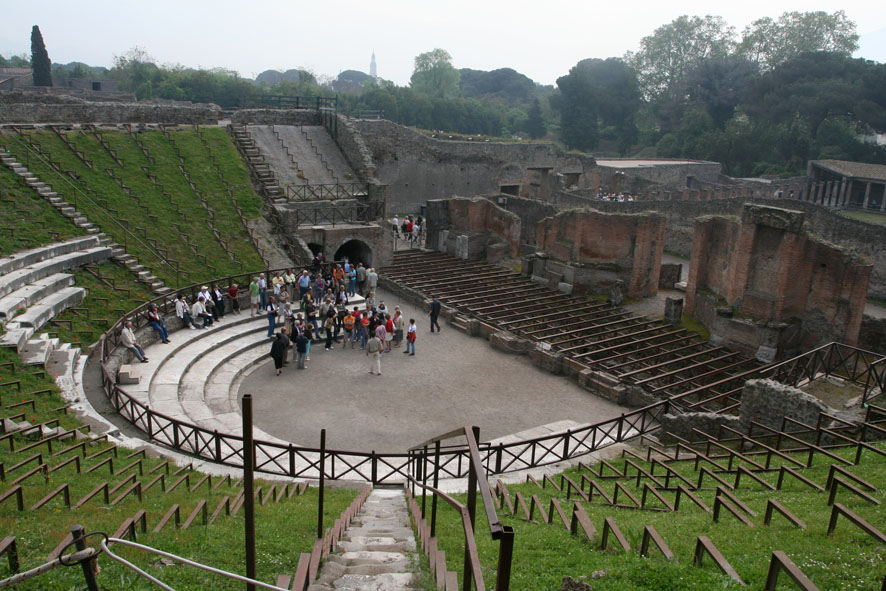 The great theatre at Pompeii, which held about 4,000 people… 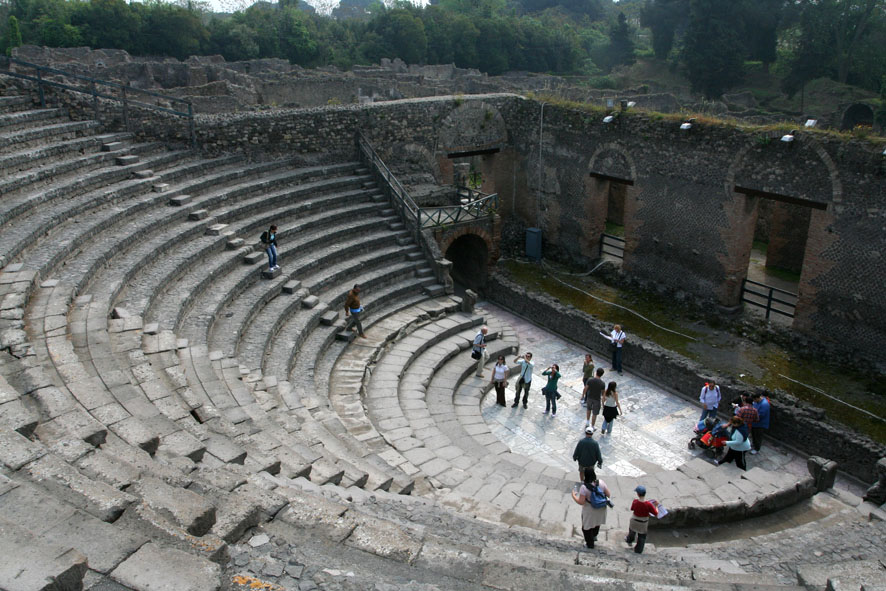 …The little theatre which held about 1,800 people 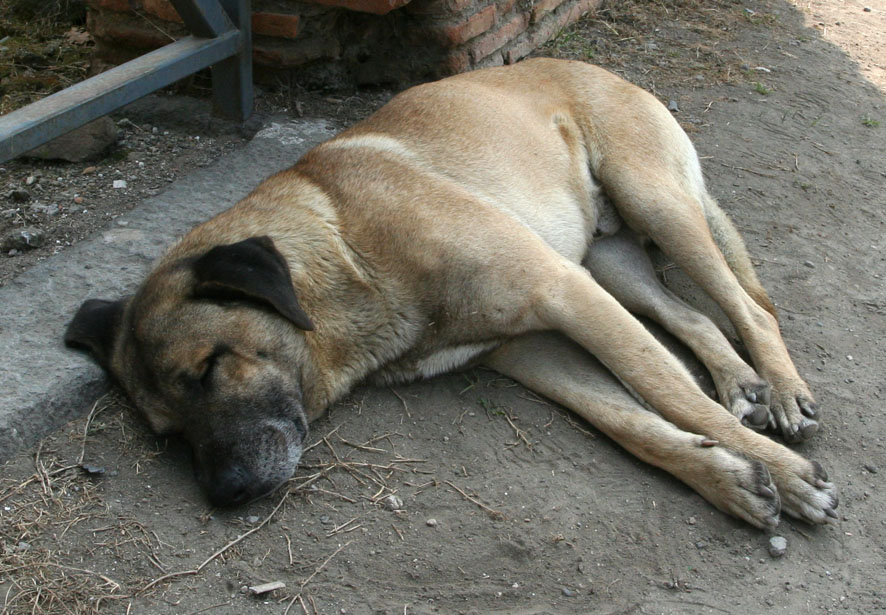 The site was so massive, so much larger than imagined. It was helpful to have seen the documentary/reinactment on TV about the eruption last year; otherwise it would be difficult to imagine the beauty and scale of the homes and baths from these remains of mosaics and frescoes. One unexpected addition to the site was the presence of stray dogs. We saw 7 in total – mostly asleep in the shade (they probably did their socialising with each other at night!). 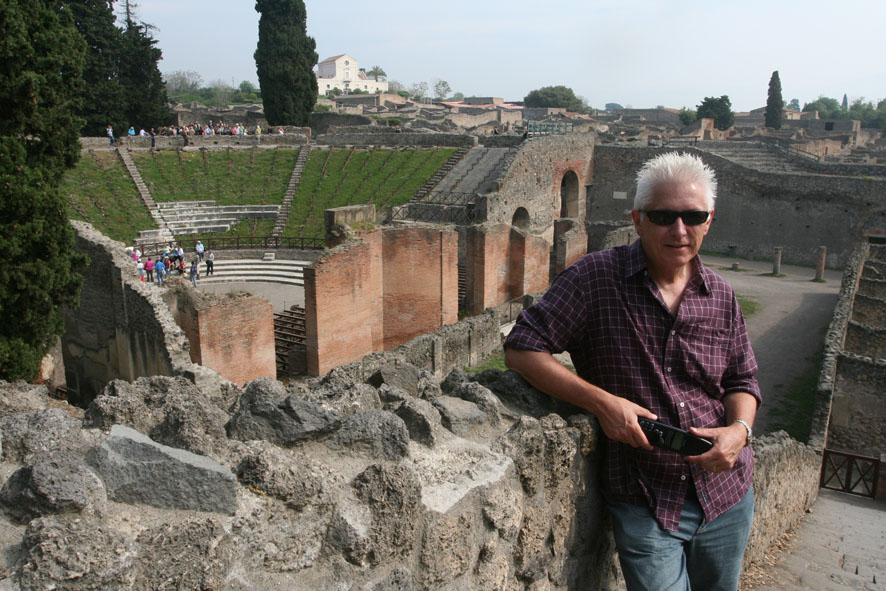 John, with the theatres in the background 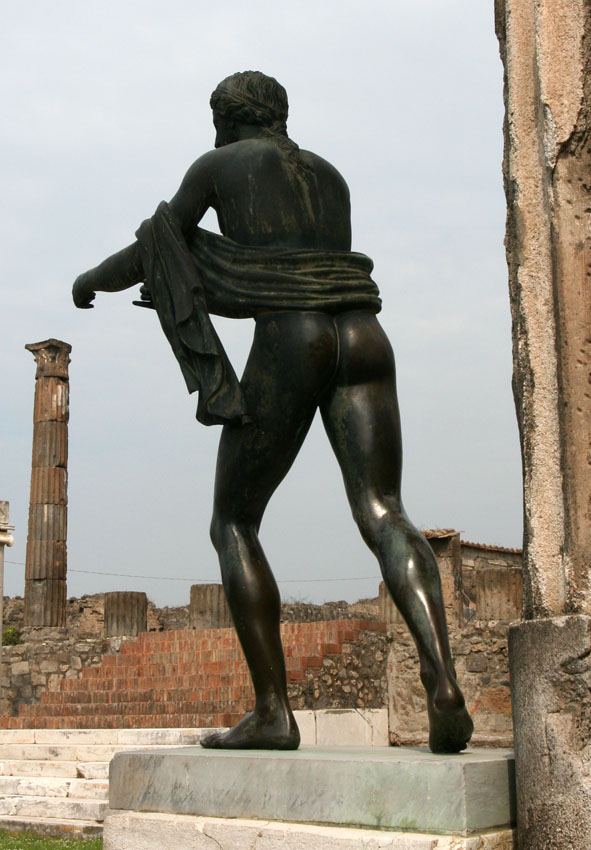 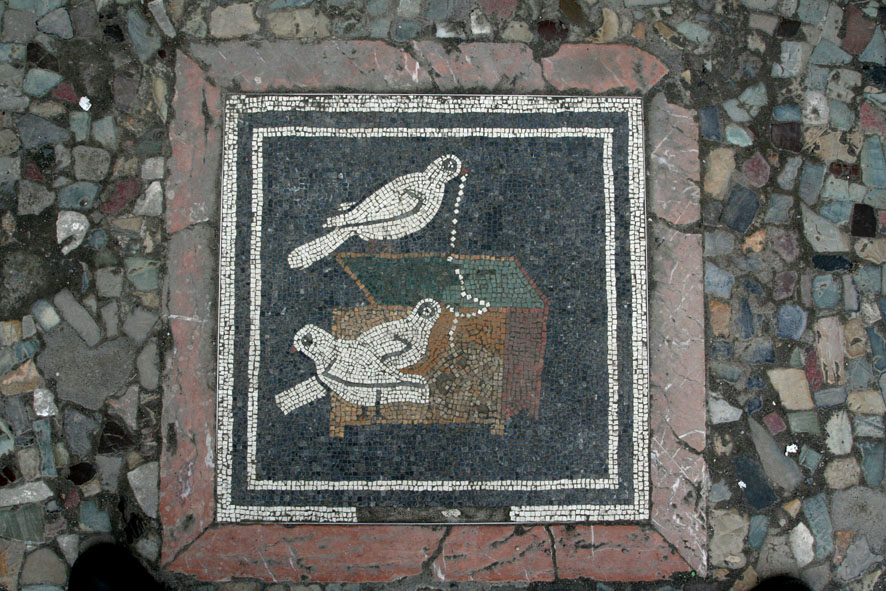 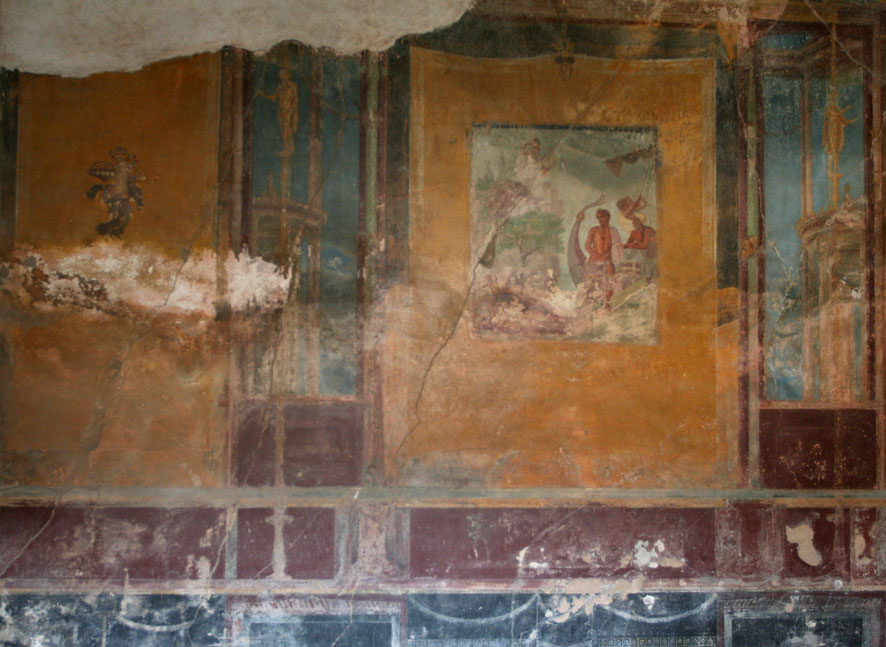 Caught the train again around lunch-time to Ercolano (which is between Pompeii and Naples) and thoroughly enjoyed this extraordinary site. They obviously haven’t uncovered the whole of the city, but what is there is amazingly preserved – it was buried by boiling mud that hardened and protected it, whereas Pompeii was buried in ash and pumice. 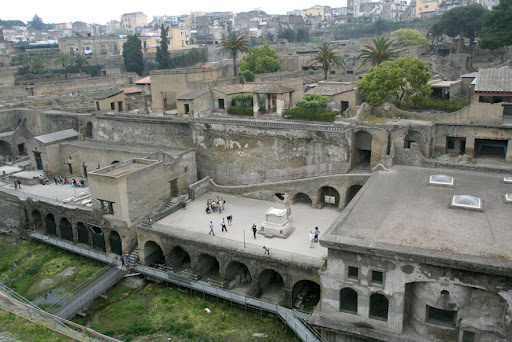 Herculaneum – notice the boat houses at what would have once been the shoreline, over 300 bodies were found there

We are glad we visited both and that we did it in the order we did. The intimacy of Herculaneum was fantastic to see after the grandeur of the much larger Pompeii site. There was one house in particular at Herculaneum that was still so lovely with it’s mosaics and frescoes – the House of the Deer (Casa dei Servi), named for the statues of deer being attacked by dogs in the garden courtyard. This house would have had the most stunning views of the Bay of Naples as well – it was right on the top of the cliff (with the boat houses, where they found hundreds of bodies, directly underneath it). 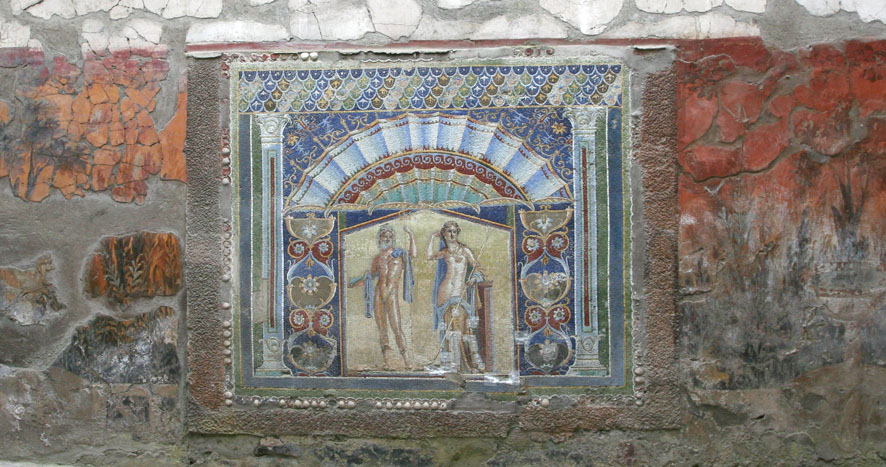 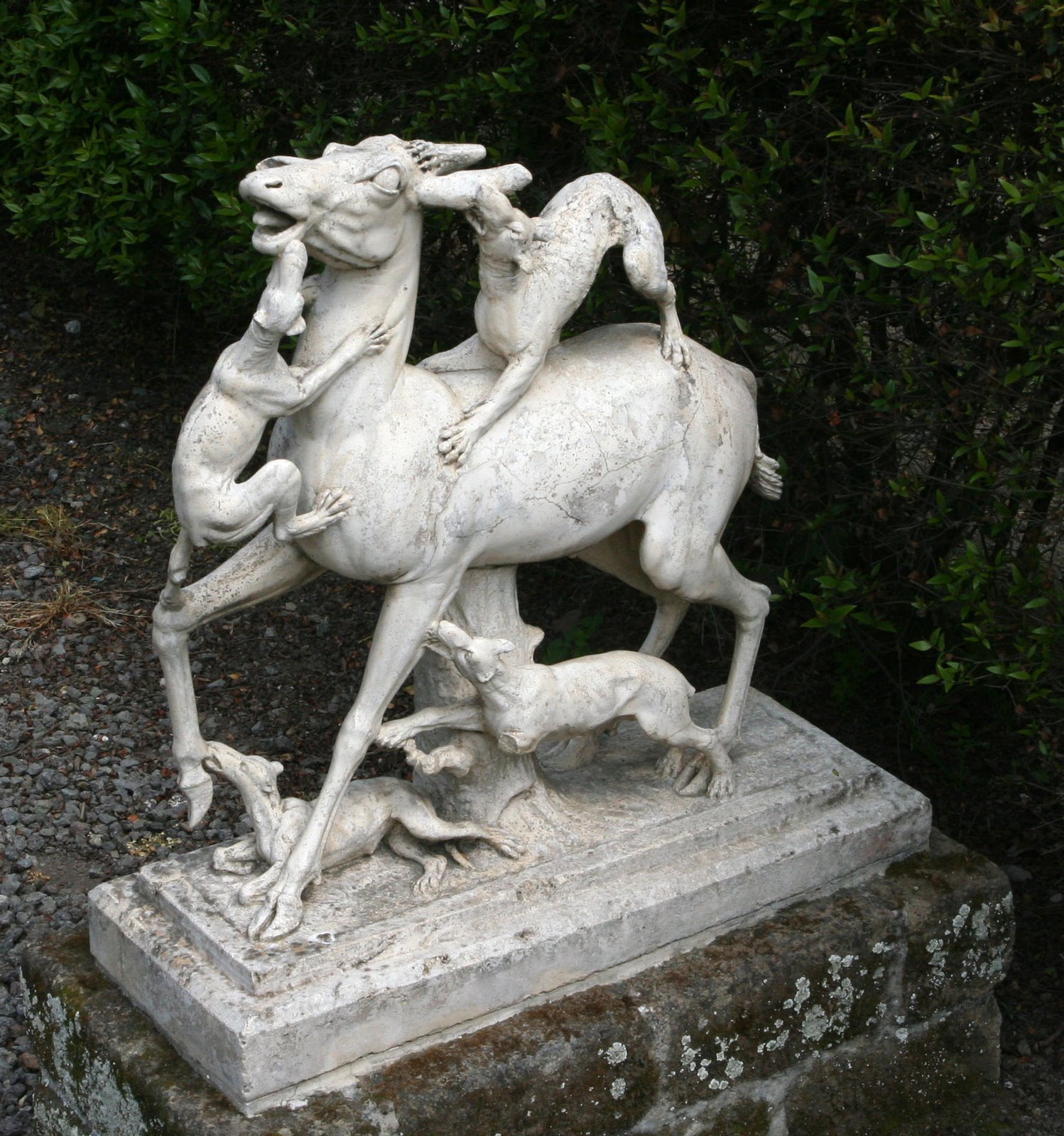 This statue is the reason the house was named so 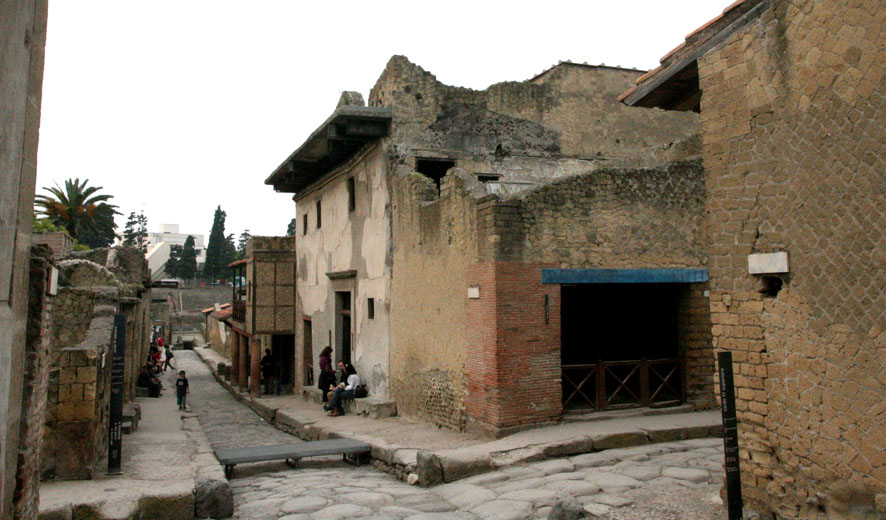 Intersection of streets in Herculaneum site 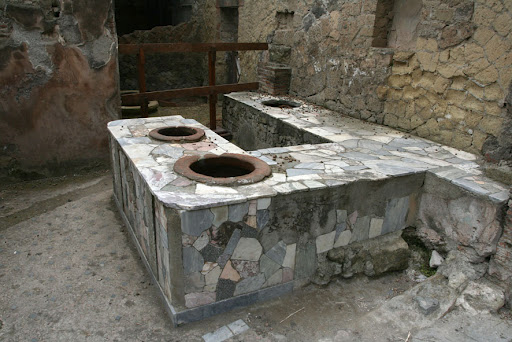 After our day steeped in history we returned to Sorrento, ate ice cream in the town and shuttled back to our lovely balcony to drink our chilled local white and eat some cashews. 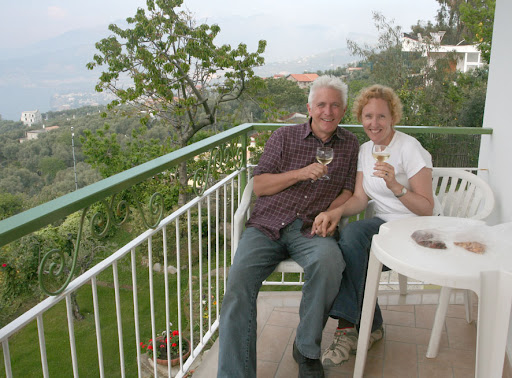 3 Replies to “Sorrento I, Pompeii, Herculaneum”