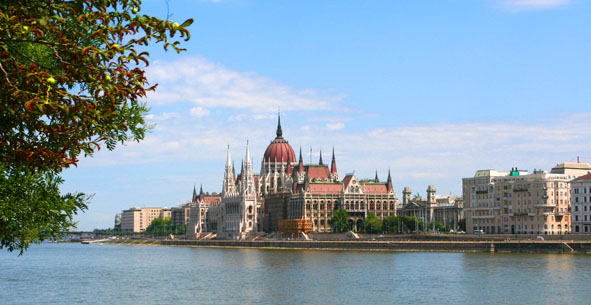 The Houses of Parliament, Budapest 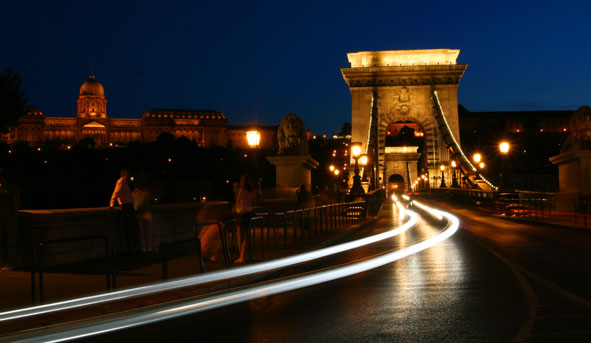 The living room of our apartment

Two full days is really only enough to scratch the surface of this beautiful, historic city (or cities, really – we stayed in the area of ‘Pest’, ‘Buda’ is on the other side of the Danube). Masters of practically every subway/metro we have encountered, we made our way to our apartment with our tiny 22in bags in tow (we both still intend to pack lighter next time). We strayed from our usual hotel or B&B option in this city to go for a lovely apartment in the VI District (near the opera). It was a beautiful combination of old and new, and was freshly renovated (in fact, we were the first visitors!). Stunning 15ft ceilings, big double windows in the living and bedrooms, chandeliers, gorgeous old wooden parquetry flooring and the most fantastic brand new, high-tech bathroom with a double shower and space age lighting (coloured and everything!). 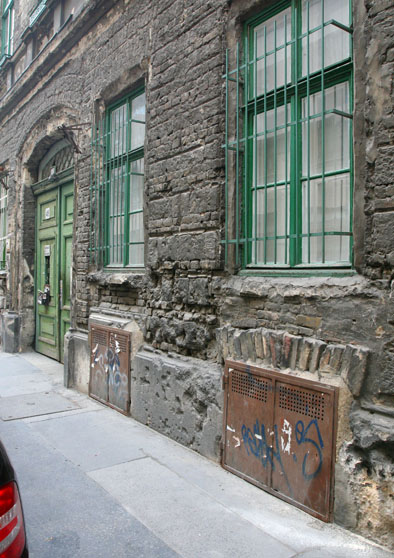 We didn’t have much time for sightseeing the day we arrived. We did go for an amazing meal at a specialist wine bar around the corner from our street (so trendy and fabulous it has no name, just a dark wooden trim on the exterior). The food was as good as the wine. We began with grilled prawns, nectarines and salad, plus grilled goats cheese and salad (loving that goat’s cheese!), followed by duck breast, vegetables and creamy risotto, and roast pork, paprika, tomato and vegetables. The waitress matched our wines to our food choices – all Hungarian and they were perfect. Apparently the quality of Hungarian wine is fantastic, it’s just that they don’t put much effort into marketing it, or exporting it. Shame. 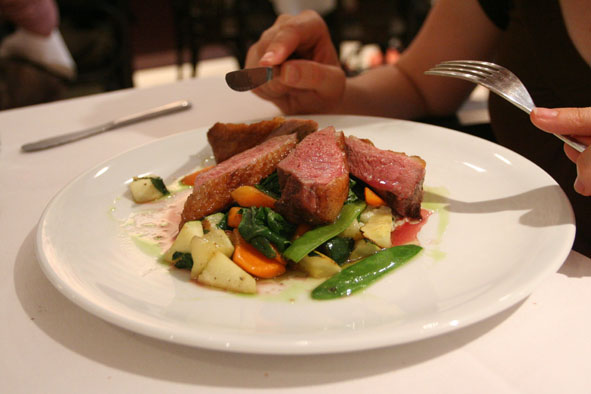 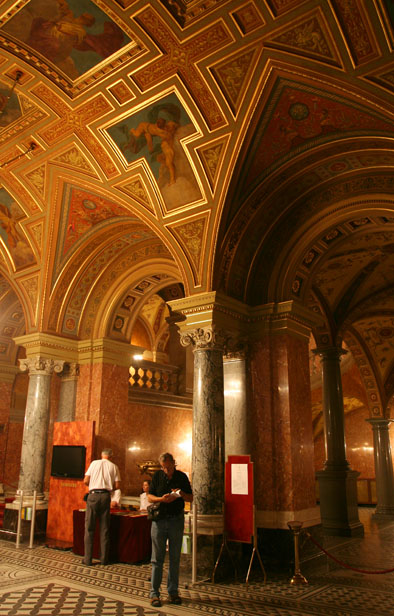 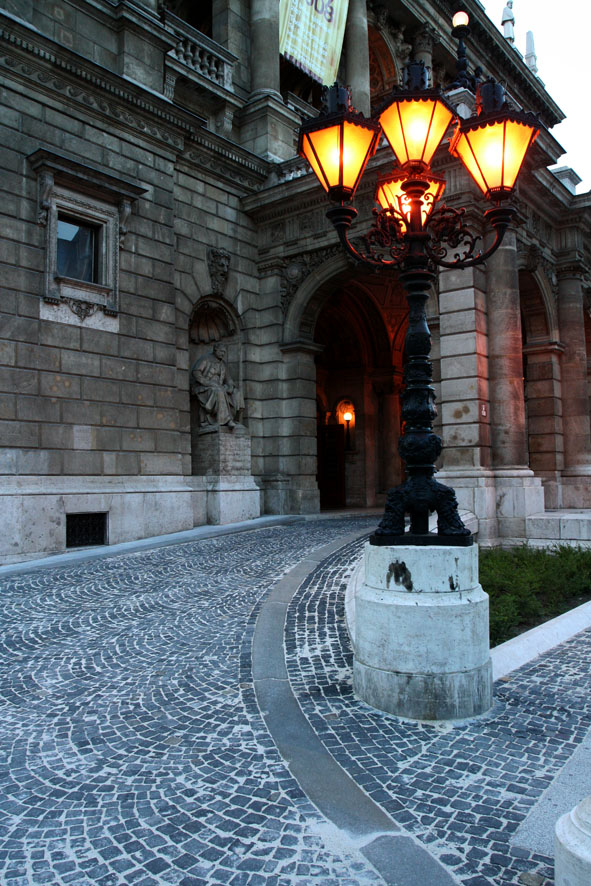 Went for a walk down one of the main drags in town after dinner, Andrássy Utcá, and inspected the Opera House – smaller than Vienna’s, similarly beautiful. Continued down to the Danube River and checked out the very touristy area where all the flash hotels are. Could definitely handle staying at the Gresham Palace (now the Four Seasons Hotel – Budapest’s first 5 star place) with views of old Buda across the river. Came over all tired quite early (no surprises there!) and headed back to our flat for a very sound nights sleep. 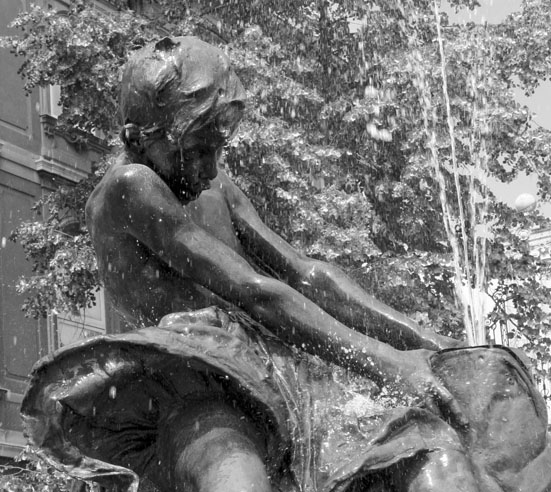 Our first full day began with a short metro trip across to ‘Buda’ and the ‘Castle Hill’ with the most amazing views of the city. The only disappointing thing about the Palace (or castle) is that, while the building is still there, any traces of old aristocracy is gone. The whole thing has been turned into a series of museums (and a very good use of the space it is too, just not as romantic!). The heat started to get to us early this day, so we hugged the shade at the side of the buildings and explored the top, pedestrian-only section of the hill, guzzling water at every opportunity. There is an area on top of the old walls called ‘Fisherman’s Bastion’, which is quite beautiful to look at and, apparently, has great views of the city, but we decided not to pay extra to walk a section of wall only a few metres higher than we already were – we still had a great view! 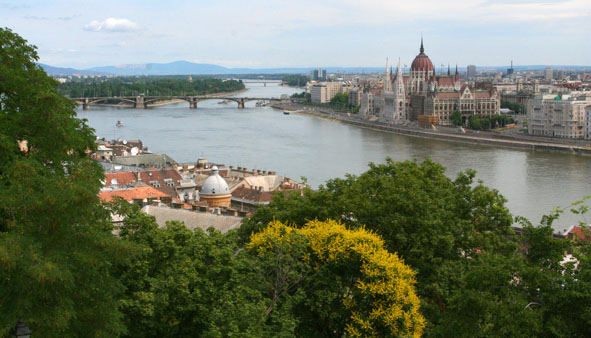 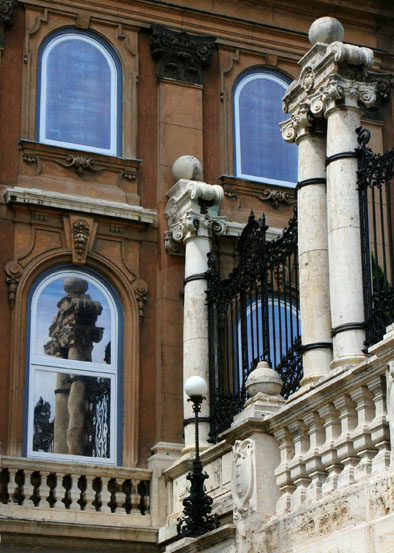 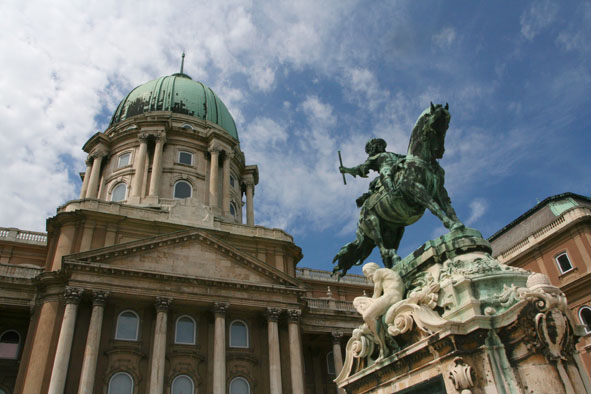 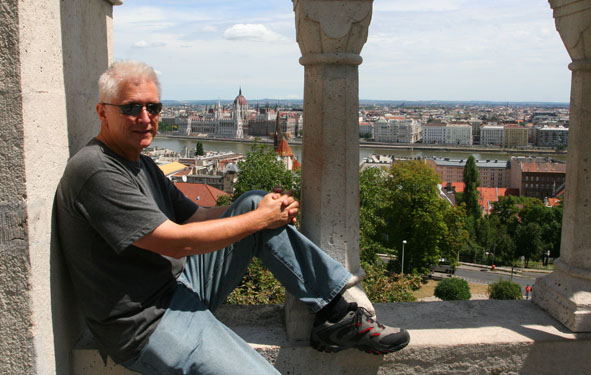 John, on the wall high above Pest

Metroed back to our apartment for lunch and some fabulously cold champagne that we had bought the day before at the corner supermarket (and cold it definitely was – we think the fridge may be set too high, but there is no such thing as too cold champagne so we didn’t mess with it – although nearly frozen tomatoes are no fun). And when we say ‘champagne’ we mean sparkling white wine from Hungary. 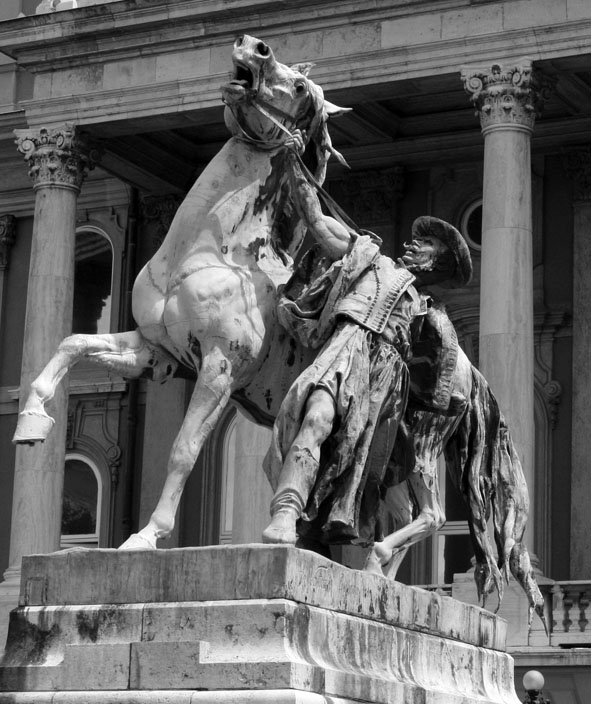 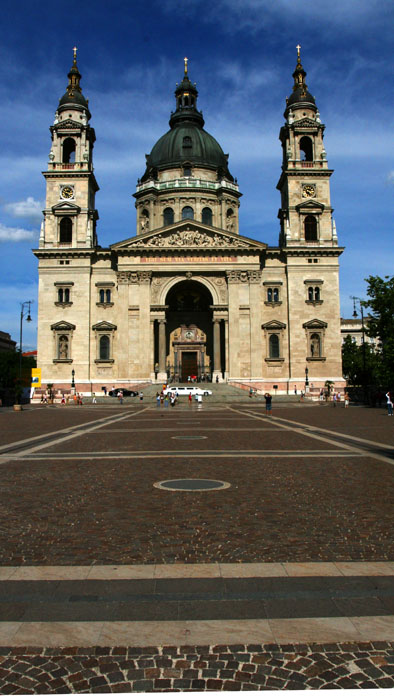 Had our naps and then checked out one of the huge malls/shopping centres (only 170 shops!). In 2 hours we covered only one floor of the place (well, Nic only covered one floor, John took things a little quicker without wasting time trying on clothes that weren’t bought!). Saw a very politically incorrect clothing shop called ‘Aboriginal’ that had some very dodgy slogans on t-shirts – they thought they were being very trendy and Australian – oops! 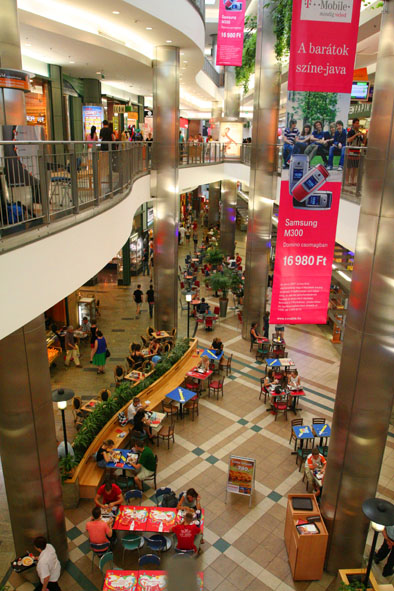 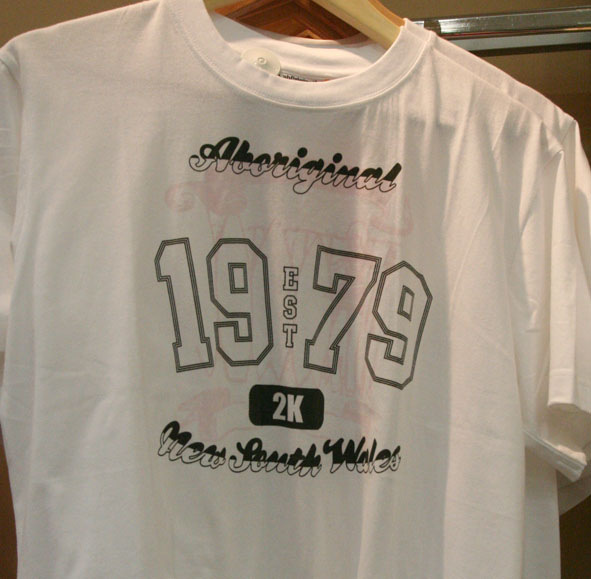 One of the least dodgy T-shirt slogans we saw

Had some Indian takeaway with our Hungarian wine in the flat before heading out for a lovely stroll along the river and a walk over ‘Chain Bridge’ in the twilight. Quite magical and so very beautiful (except for the swarms of insects flying into eyes and mouths crossing the bridge – but the thousands of spiders that had set up camp on the bridge railings were doing their best to rid us of these pests!) 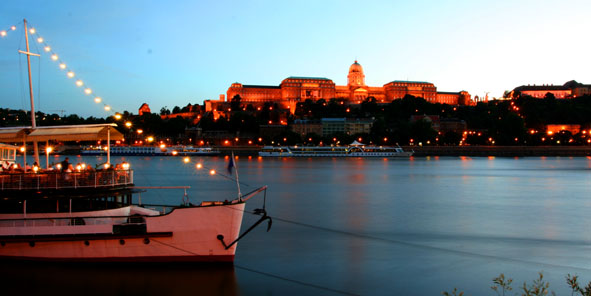 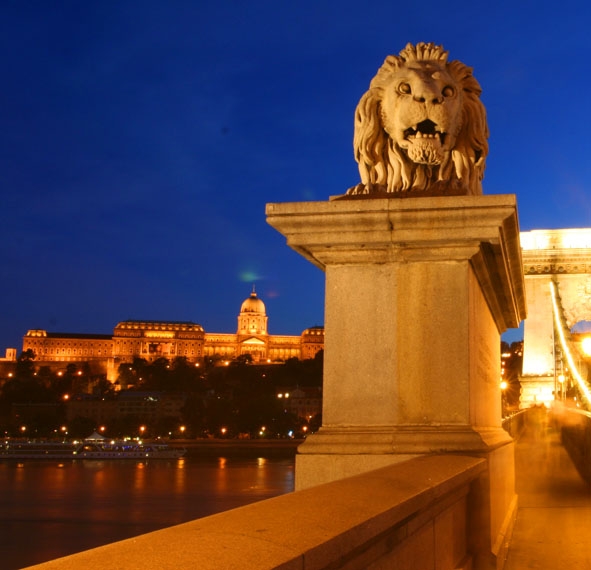 Aarrhh!…one of the lions guarding the bridge

Houses of Parliament at night 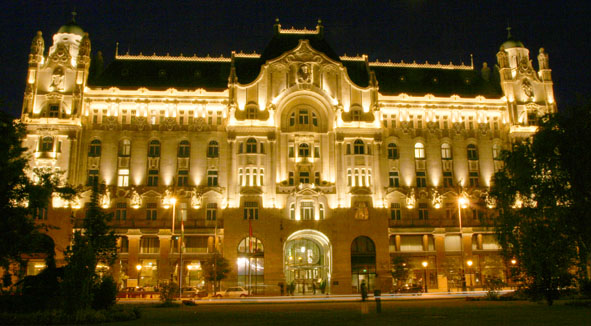 Final full day began with a thwarted attempt to see a communist statue park. We didn’t realise how far out of town it was. After 2 metro rides and one tram ride to the end of the line we discovered it was another 15 minute bus ride (not covered by our pass) and it all became too hard. John did manage to get some very interesting shots of the ‘end of the line’ railway station where the tram stopped – definitely the real Budapest, not the sanitised, westernised tourist version fed to all of us visitors.

The railway station at the end of the tram line 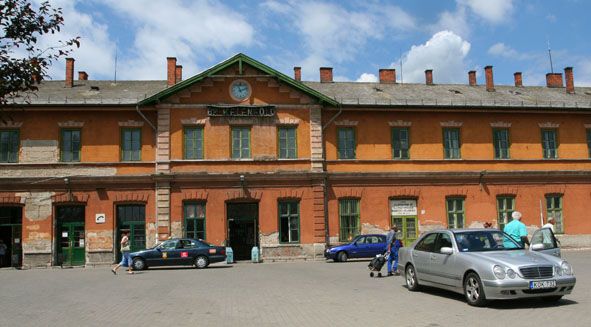 The front of the railway station 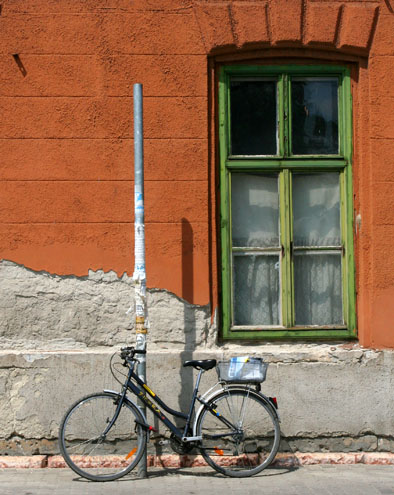 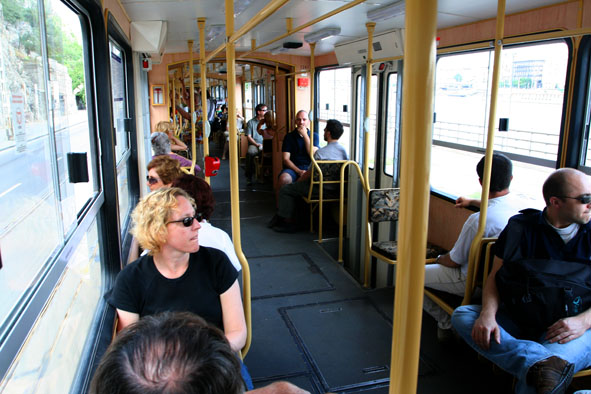 Nic on the tram

Went back to town and instead went to the Central Synagogue (second largest in Europe) located near where the gates to the Ghetto (of 1944-45) once stood. We took a guided tour led by the daughter of two survivors of the Ghetto. She had some very inspiring and moving stories to tell – and the figures and facts never cease to shock and terrify. Amazing to hear tales of such strength and courage, and to see that same fierce pride and true sadness in the tour guide’s eyes mirroring the experiences of her parents. The weight of such things is truly heavy, but somehow gave her strength too. 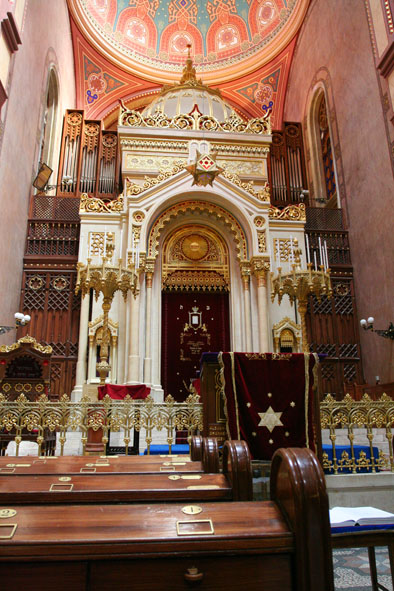 Inside the Central Synagogue 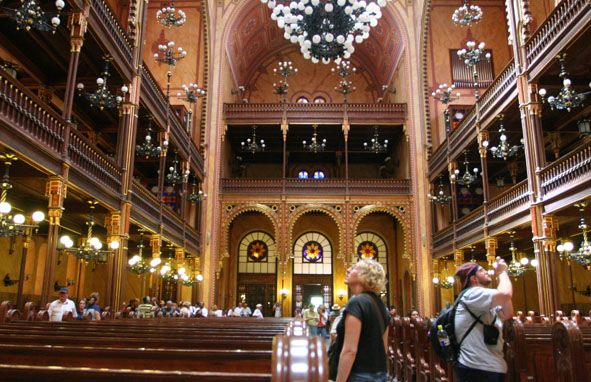 Went for walks in the city park after lunch and visited Heroes Square (which is really a very fancy skateboard park these days). Pretty fabulous spire with the Archangel Gabrielle atop. Many children around feeding ducks, buying colourful, foil helium balloons and going to the big amusement park with their parents (with a heritage listed merry-go-round!). Decided to go back to the apartment and grab our swimming costumes when we saw Budapest’s biggest public baths and thermal springs – there are many hotels and spas all over the city making the most of these natural hot springs. We didn’t get into the complex until about 5:30pm, but it was still very crowded – can imagine how packed it would’ve been in the heat of the day. Spent a very pleasant hour swanning and swimming around, firstly in the very pleasant 28 degrees pool, then in the 38 degrees pool. Just like a really, really big bath…only we all had swimmers on…thank goodness! Were quite relaxed after this and found it perfect preparation for another good night’s sleep. 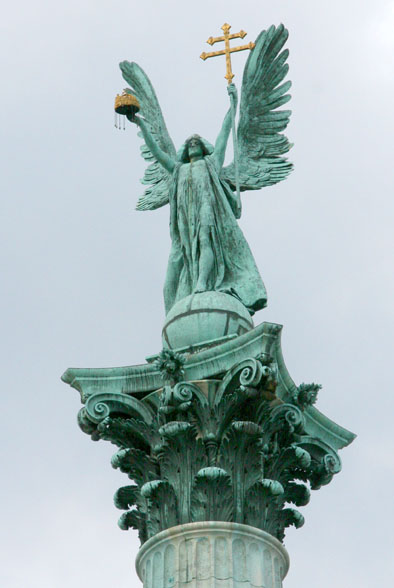 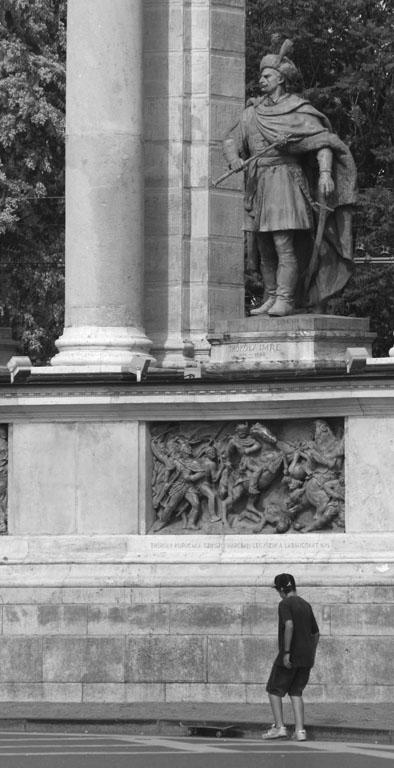 Buff chariot rider in the nuddie 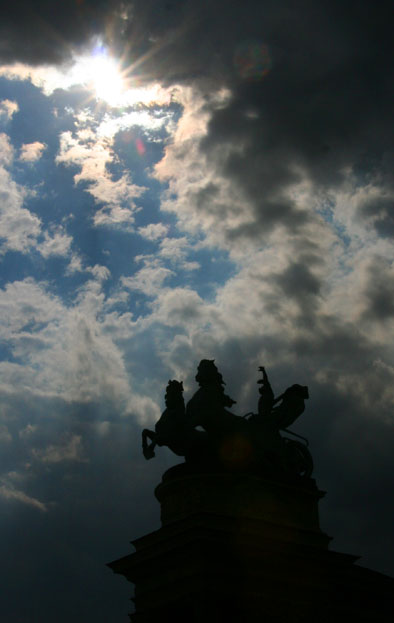 …And again, in silhouette

One Reply to “Budapest”