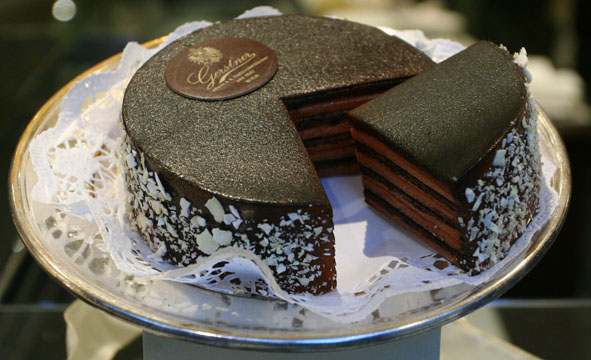 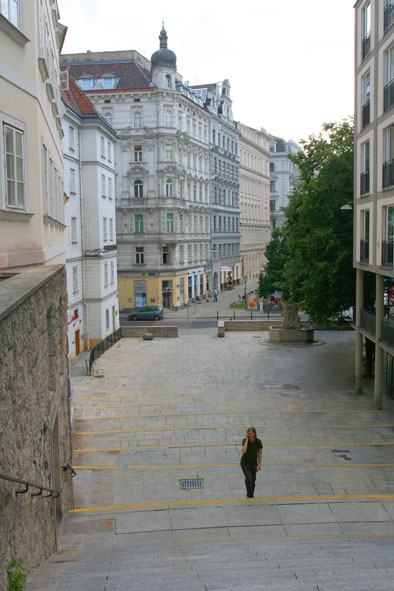 Quiet back street in Vienna 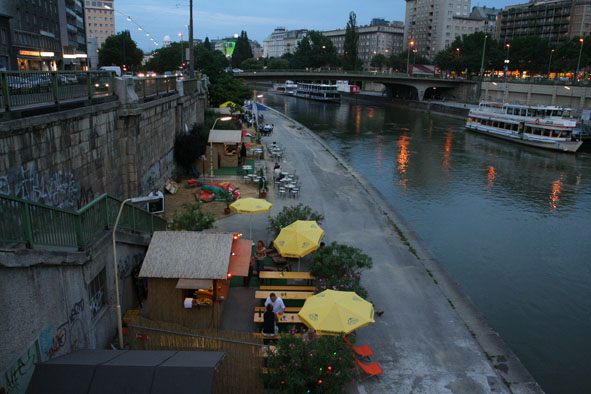 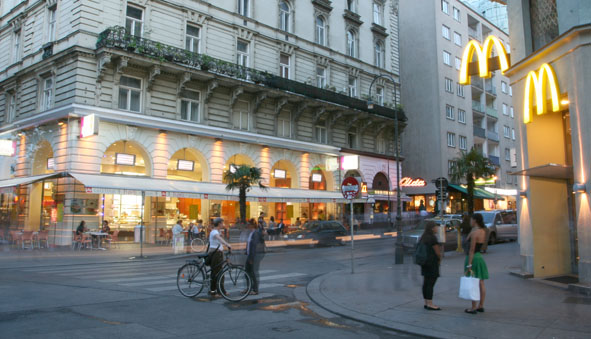 So much to see and do in Vienna and 2 and a half days just isn’t anywhere near enough time! (This is going to be the case for the rest of the trip – can we stay longer, can we?!) The public transport is a dream here – we miss a train and we have to wait a whole 3 minutes for the next one. On the first afternoon we explored a bit of the city (which is obviously much bigger than Salzburg) and ended up at the Opera House. Decided to go for standing room seats for Verdi’s Otello and were very pleased with our spots underneath the Emperor’s box right in the centre. We only lasted the first hour and 15 minutes due to exhaustion and what we thought was a dire need for direction in the production (and the knees and backs of both of us were not up for more standing without movement in a confined space – they had us packed in like we were off to market, stuff the OH&S). The singing and the orchestra were really amazing, but they could learn from the Sydney Opera Company in regards to set design and direction. The walk back to the hotel was punctuated by window-shopping, ice cream-eating and busker-watching…or is it ‘listening’ when they are musicians? Wandered through a street party/event thing with a fabulous drag queen in attendance having her photo taken by the various media reps there. 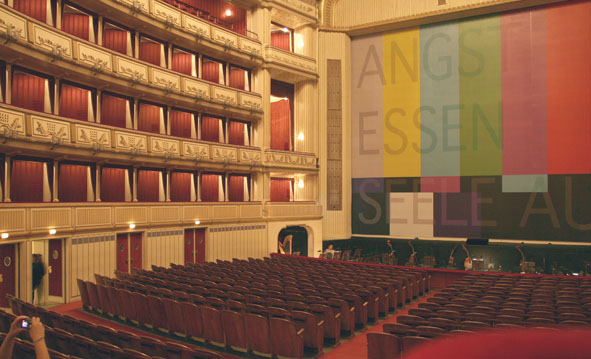 Our view from the standing area under the Emperor’s box 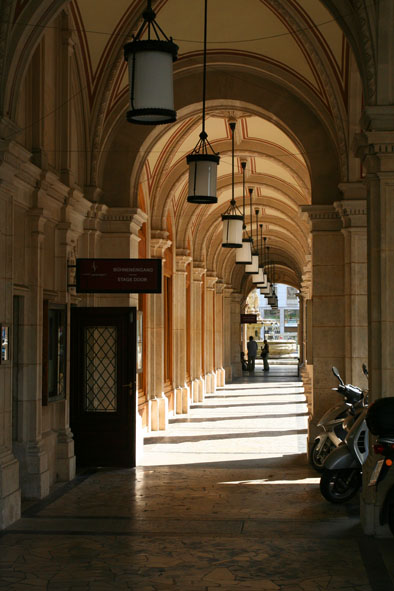 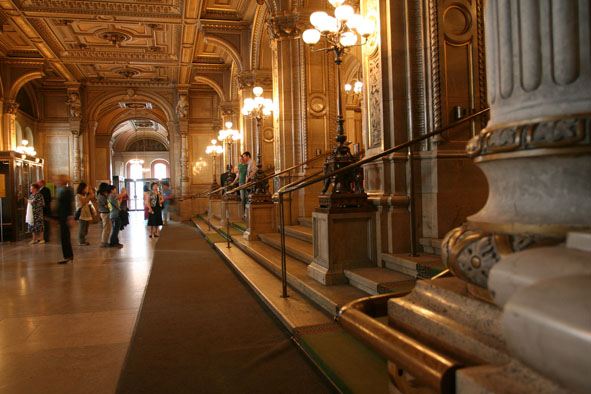 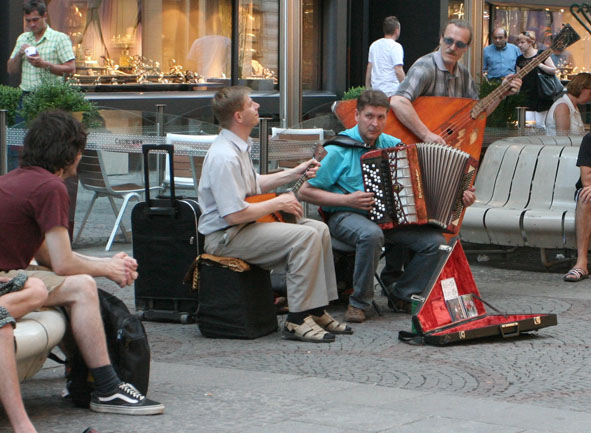 Buskers (very talented ones, too!) 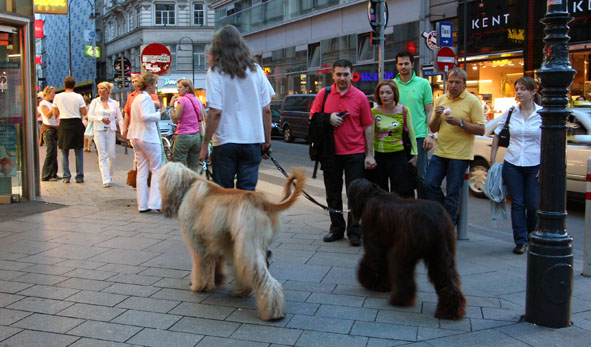 They say some people resemble their pets…

Next day was very full. Began with a trip to the Lipizzaner Museum (the Spanish dancing horses). Very informative and entertaining museum that included a remarkable 30min documentary film on the horses. This was followed by watching the morning practise of the riders and horses, which was a LOT cheaper than an actual show (the seats we had for watching the practice would’ve cost €110 each!). They were truly magnificent animals. What was particularly surprising was the mild temperament of the horses, being stallions and all – apparently one of the characteristics of this breed is their placid nature.

Our visit to the Spanish Riding School was followed by the Imperial Apartments in the Hofburg Palace (where the Austrian royals, the Hapsburgs, used to live). This was a wonderful museum. Learnt so much about this dynasty and particularly the Empress Elisabeth (known as Sisi) – the 19th Century Austrian version of the Princess of Wales. Intriguing. Always enjoy a peak at the extravagance of royalty, no matter which nationality. 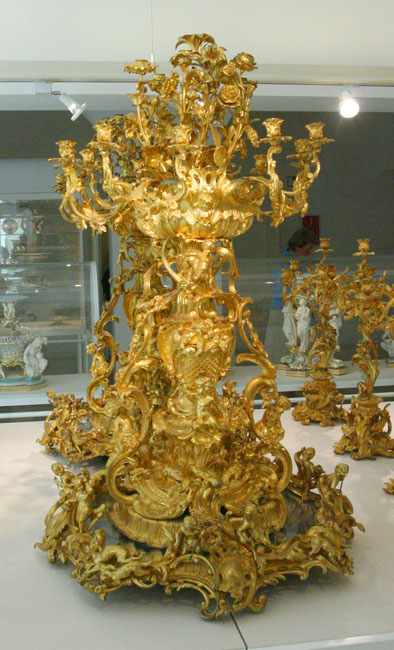 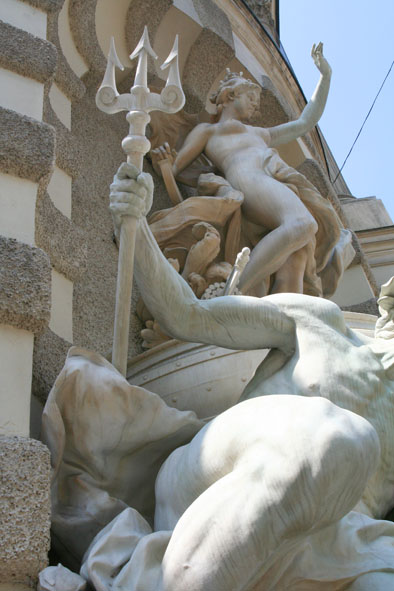 Statues in fountain outside the royal palace 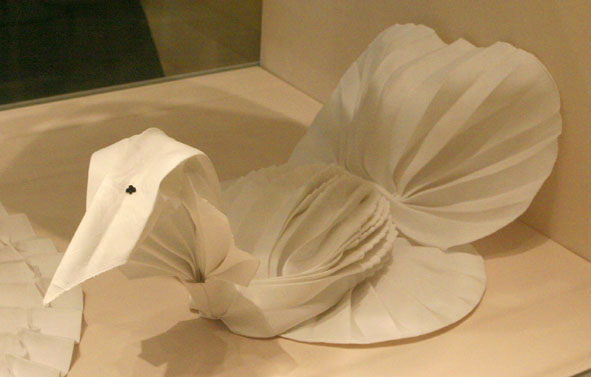 Checked out the Treasury nearby containing some extraordinary and rare objects, including a huge piece of Jesus’ cross (with nail hole!) and some amazing vestments made from woven gold and silver threads. Also a 10th century coronation crown so elaborately constructed they only used it once. Nevertheless the museum was overpriced and the people working there didn’t seem to enjoy providing a service. Had an amusing moment (not at the time) trying to get into the toilets, very frustrated they were both locked. Someone else came up and tried the men’s door to no avail. While we were looking at each other with resigned ‘Here we go again’ looks a young lad strode past us and pushed the door open. Didn’t realise till then how ingrained in body memory was the pull movement when one enters a public toilet. 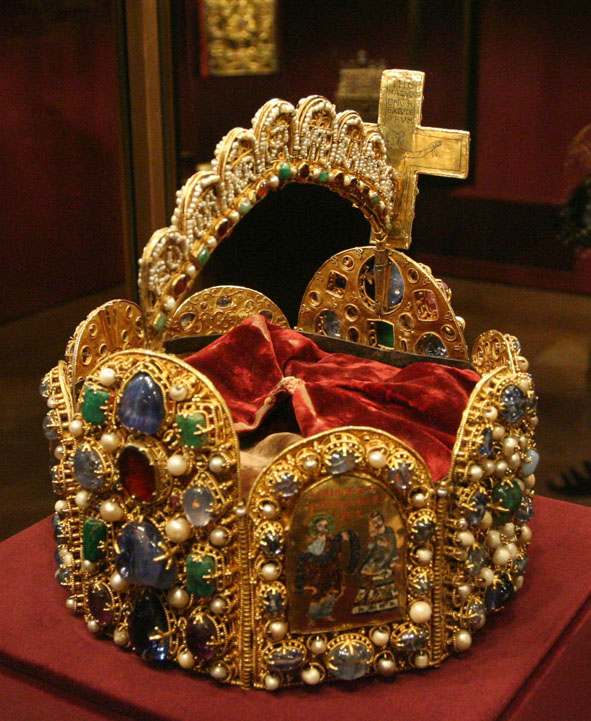 We then did a tour of the Opera House which gave us a look at the various foyers and interval lounges as well as the auditorium and a sneak peak at backstage. No surprises there, but still an interesting close up look at the opulent gilding and interior design that spanned quite a few centuries – the House was rebuilt in the 1950s after WWII, with only a few areas remaining after the bombing. Of the company’s 90million euro annual budget, half is subsidised by the government. The annual Opera Ball (where a box can be bought for €17,000) is a one-night event where all of the seats on the auditorium floor are removed and a false floor is installed at the level of the stage. The entire space – stage, backstage and auditorium – appears to be one seemless area with the walls being hung with flowers and other paraphernalia. The ball begins at 10pm and finishes at 5am when there is an entire army of crew waiting to bump out the ball and bump in that night’s show. 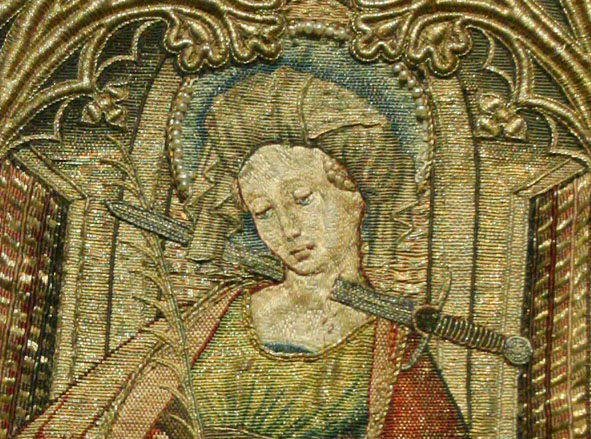 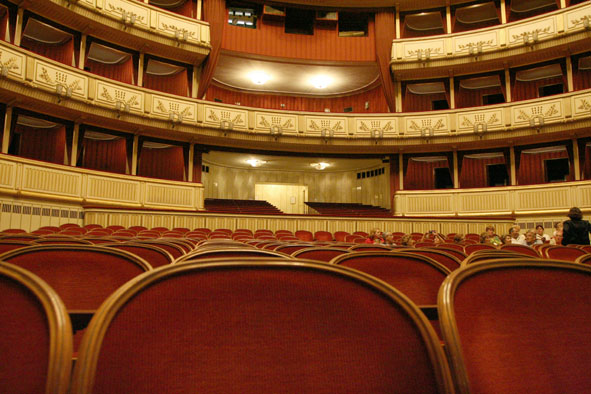 Emperor’s box and standing room area below from the stalls

Our second full day in the capital began with an excursion to Schönbrunn Palace – the summer residence of the Hapsburgs – the only European palace to rival Versailles. It was spectacular! Thoroughly enjoyed every step of the tour, including the trek through the gardens to the top of the hill to survey the entire estate from the fancy viewing platform. Although it is a little freaky the way that the palace looks like old Parliament House in Canberra from the hilltop in the gardens. 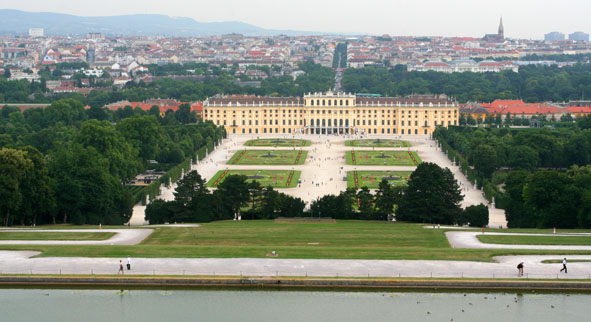 And this is what he was taking a picture of – doesn’t it look like Old Parliament House? 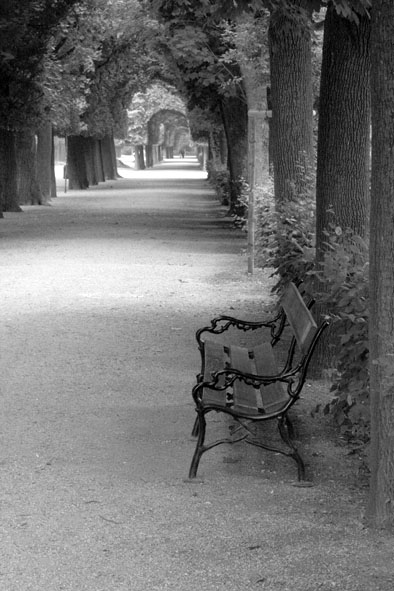 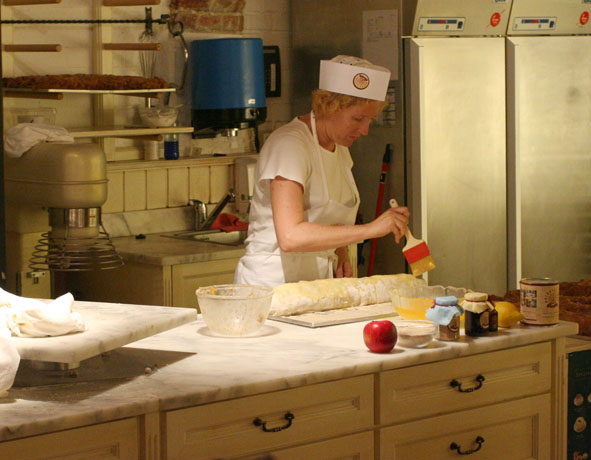 We attended a strudel making demonstration in the old bakery at the palace where Nic was chosen to assist the cook. Very amusing with oh so attractive headwear included. Took the subway back to the centre of town (only 15 minutes away) for a lunch that was a change of pace – we had Indian! What a delight to have something with a bit of kick in it! Very enjoyable (and it opened the sinuses). 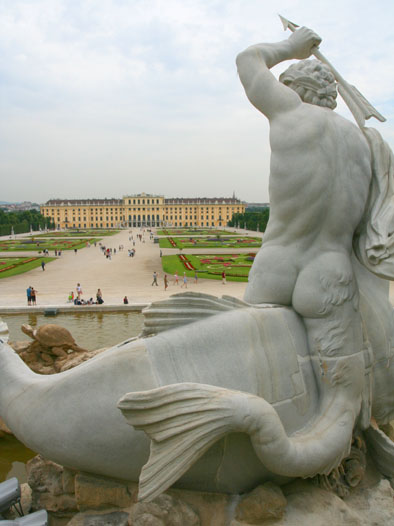 John playing in the elevator

The afternoon was spent at the Kunsthistorisches Museum (or the Kunst, pronounced ‘Koonst’, for short) – basically the best art gallery in Austria. It was built in 1888 as a museum to house the Hapsburgs’ massive art collection. It is filled with wonderful works from Caravaggio, Bruegal, Rubens and Rembrandt. Too much to truly savour and appreciate in one visit, but we gave it a pretty good going over!

Have no fear, Nic managed to finish this mountain of ice cream 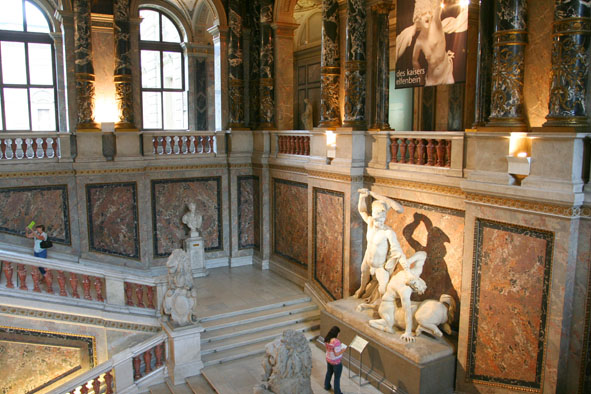 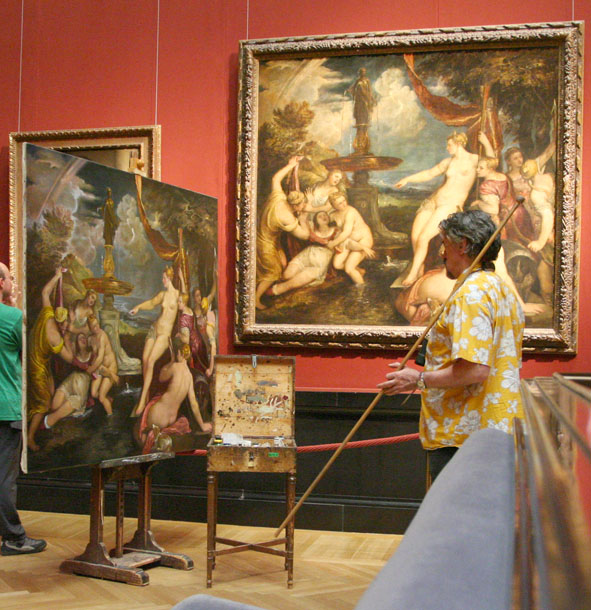 A painter painting a painting 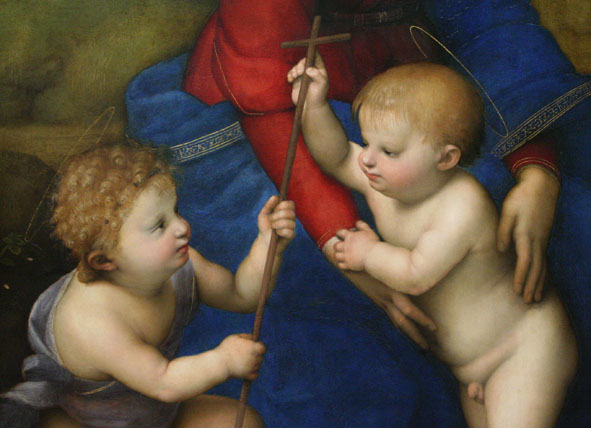 Detail of Jesus and John the Baptist as babies 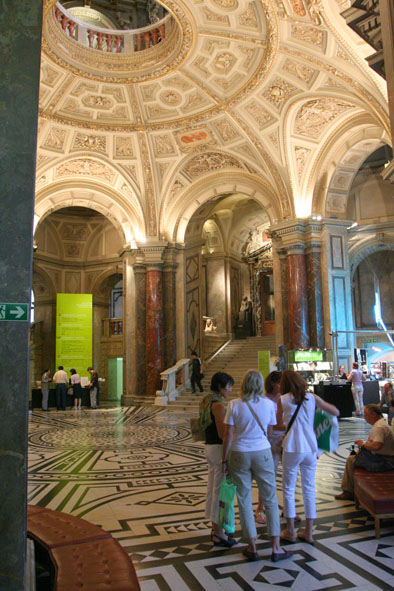 Our final evening gave us a chance to stroll along the canal and check out the bridge used in the film Before Sunrise. Couldn’t resist taking some pictures there with us posing in front of the camera-laden tripod. Another adventure awaits us, with three countries speaking languages we have absolutely no experience with (and without a trusty phrase book to help us!). 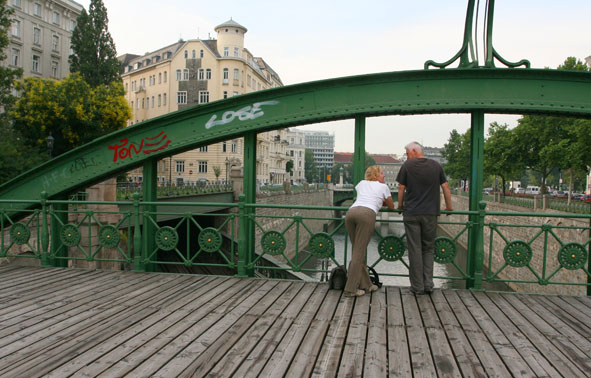 Nic and John on the bridge in Before Sunrise. If you’ve seen the film, you’ll understand the shot

Check out the private swimming pool attached to the barge 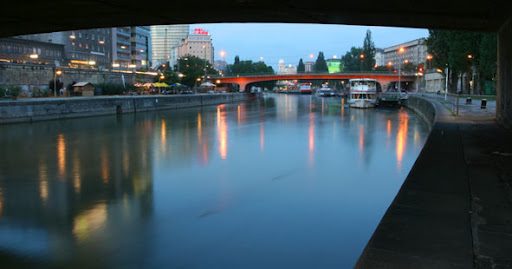