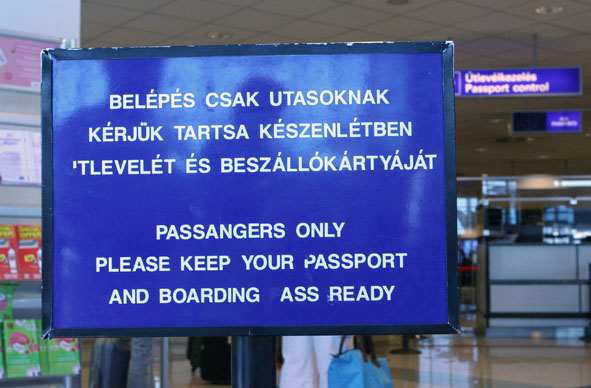 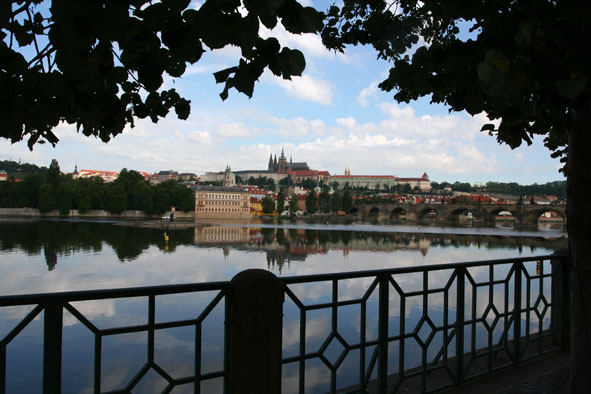 Well this would have to be the most beautiful city in Europe (and, yes, we say they are all lovely, but this one is truly jaw-droppingly gorgeous). In fact, it is giving Paris a run for its money as our favourite city! Being untouched by the bombs of WWII gives it an advantage over a lot of other European cities (and there is also that whole ‘behind the iron curtain’ thing for years…). Can easily see why Prague has been the city of choice for historical location film shoots from Amadeus to Van Helsing! 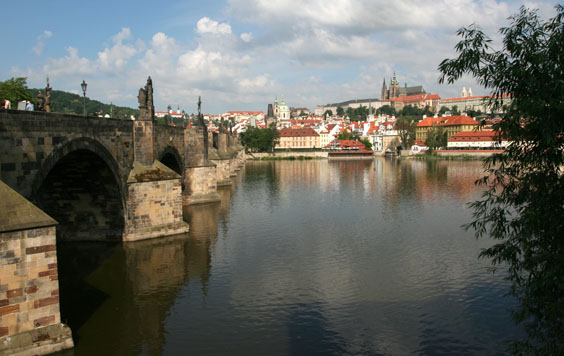 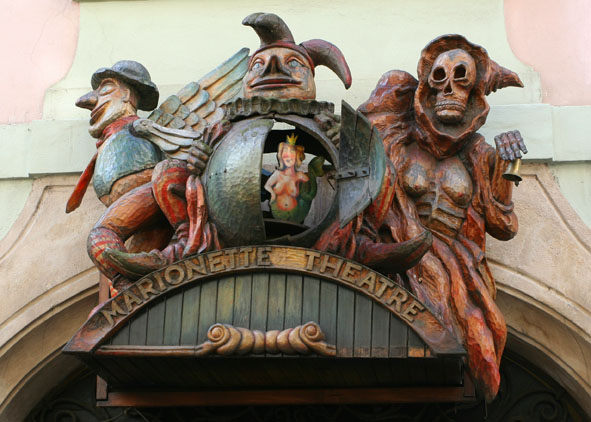 Had an interesting arrival though. We were over an hour late taking off in Budapest and so nearly missed our connecting flight in Vienna (there was an airport official on the tarmac with clipboard and minivan to drive us speedily the whole 300m to the awaiting plane). Problem was, our luggage didn’t make the flight. Austrian Airlines was pretty efficient though, they had it on the next flight and it was at the reception of our apartment when we came back from dinner, so major drama was averted. Guess it’s more important to get the passengers on the scheduled flight rather than the luggage – that can get thrown on any plane. 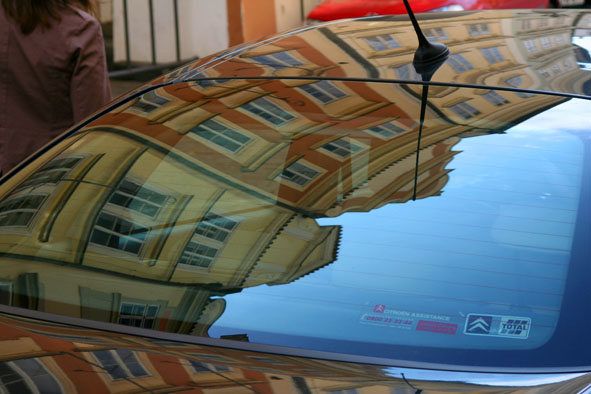 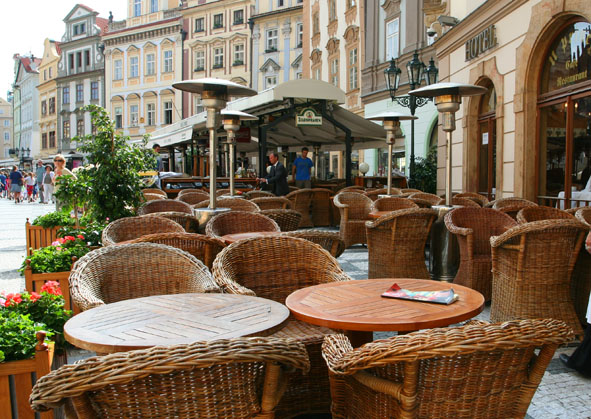 We had a lovely Riverside apartment on the ‘Little Quarter’ side of the River Danube opposite the Old and New Towns which was quite peaceful – no stag parties to listen to carousing up the street at all hours like you get in the Old Town. We also had free Wi-Fi internet which enabled us to catch up on our blogging which made Nic a very happy camper! 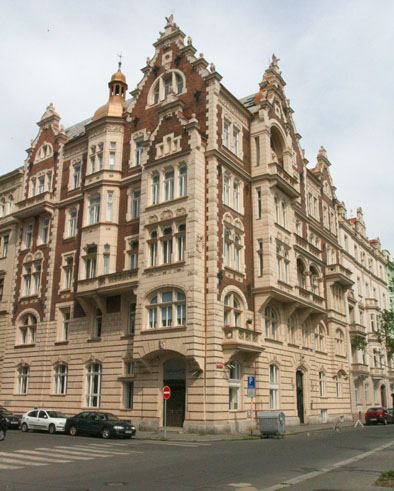 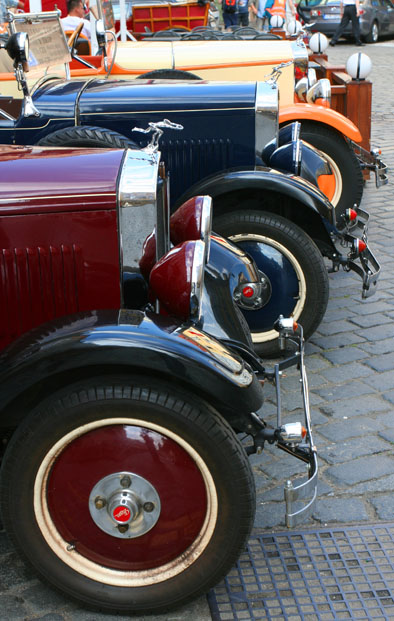 Vintage cars waiting to take the tourists for a ride 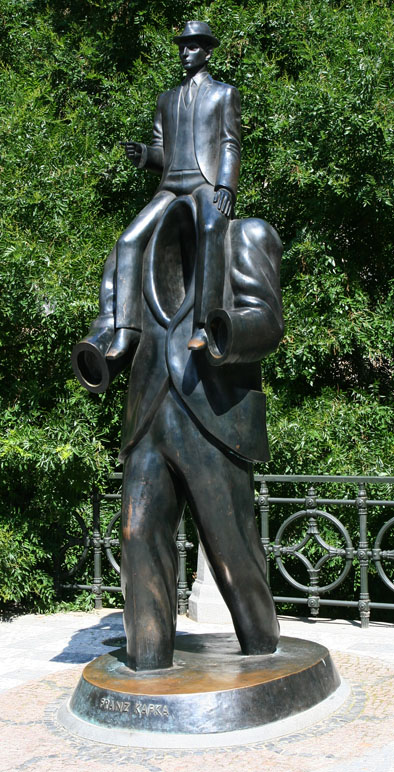 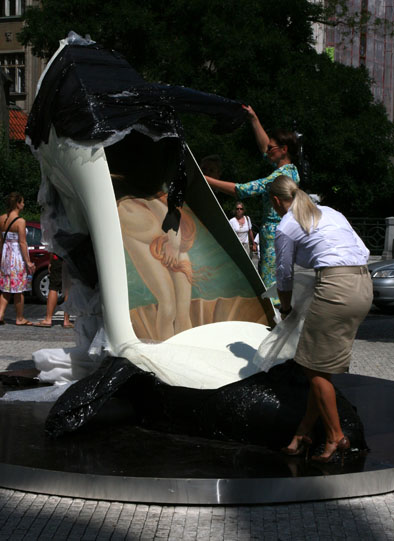 First night we went to a very atmospheric restaurant in the ‘Little Quarter’ near Charles Bridge in a cellar next to an old monastery called, when translated, ‘By the Maltese Knights’. The candlelight did make it a little difficult to read the menu, but we managed, we just took our time and sipped our Czech sparkling wine. Chose eggplant stuffed with goats cheese and vegetables served with gnocchi and a tomato sauce and the other dish was rolled salmon and fish (of some other sort) with tiny potatoes and asparagus served with a camembert sauce. Mmmm. Had a late-rippening grape, cool-climate white wine that was delish! 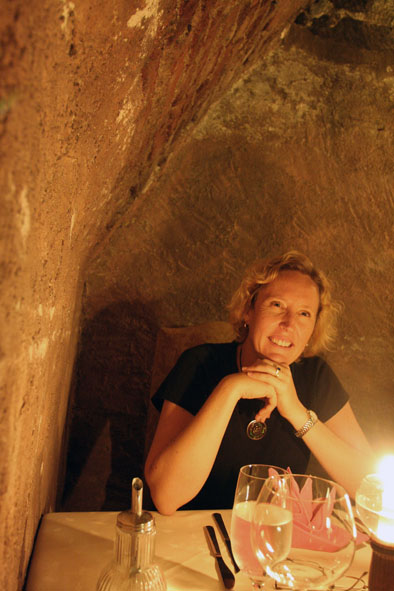 John and Nic at ‘By the Maltese Knights’ 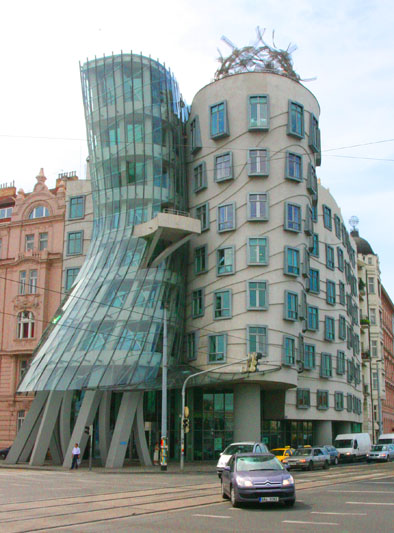 The building that architects have dubbed ‘Fred and Ginger’

Our first full day was another big one beginning with a bit of a tour of the Old Town focusing on the Old Town Square famous for its Astronomical Clock and amazing array of different architectural styles – Medieval, Gothic, Renaissance, Baroque, rococo and Art Nouveau. Almost like a studio backlot – just decide which time period you’re filming and shoot with that bit in the background. 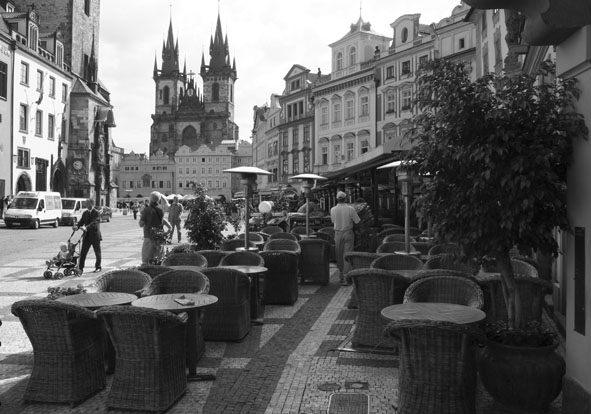 Spent a good couple of hours touring the Jewish Museum in Josefov (the Jewish Quarter of the Old Town). The ‘museum’ is actually 7 sites that comprise a full Jewish history tour experience. The children’s drawings done while in the Terezin camp (outside of Prague) were particularly moving. The cemetery was very interesting too – 12,000 tombstones in a small area all crammed in, literally on top of each other and leaning over all higgledy-piggledy. Between 1439 and 1787 it was the only burial ground allowed for the Jews of Prague, and since the Jews believe that the body should not be moved once buried, tombs were piled atop each other. 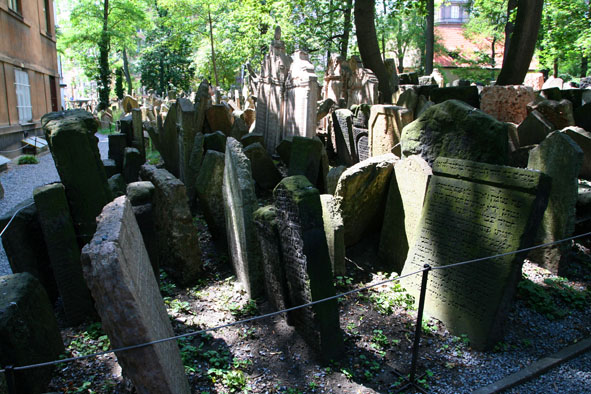 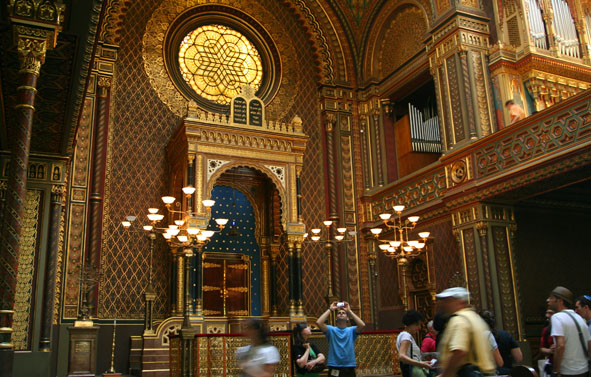 Had a fantastic lunch at a Thai restaurant – amazing chilli duck and green veges. Just the right amount of kick. Just what we needed. Had a rest back at the flat and then set off for a tour of the Castle Quarter. It was getting kind of late (things closing etc.) but it was wonderful to wander out of the afternoon heat and without the crowds. The grounds to the old palace (now government offices) were open till late, so we enjoyed being some of the few people strolling through the old courtyards, watching the changing of the guards and getting access to a tiny old street that in business hours you have to pay to enter (!). Saw a tiny house there that Franz Kafka briefly lived in. The evening continued with our ritual of strolling through the streets and along the river at night for beauty, atmosphere and photo ops! 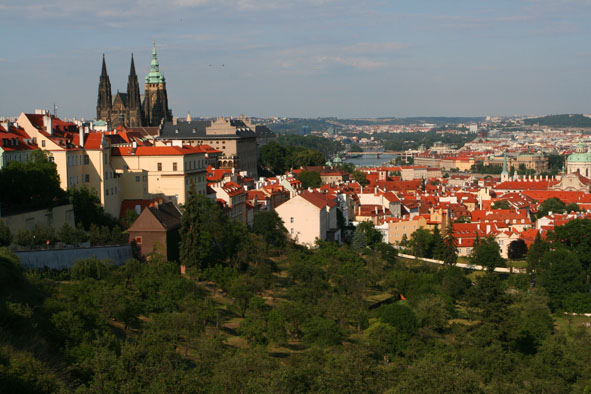 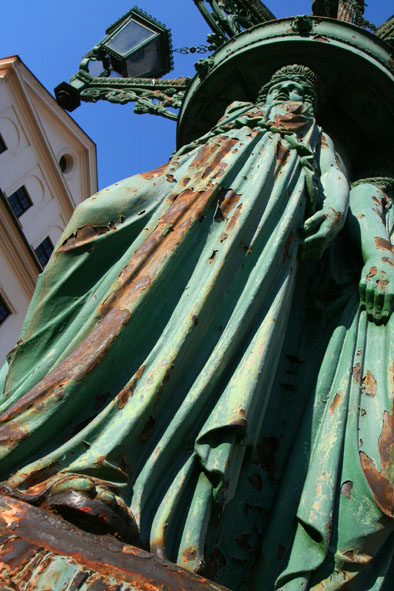 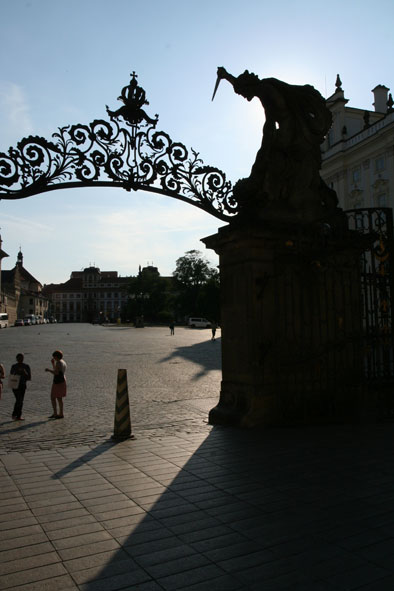 Detail of gate of Royal Entrance to church in Palace (drink that mead!)

The next day we took up where we left off the day before in our exploration of the Old Town. Were excited to stumble upon the Estates Theatre – where Mozart directed and conducted quite a few of his operas, including Don Giovanni. It was also used in the film Amadeus. Got even more excited to discover they were doing a little Mozart concert that afternoon, so we bought tickets and trotted off merrily to find something to tide us over until lunch! 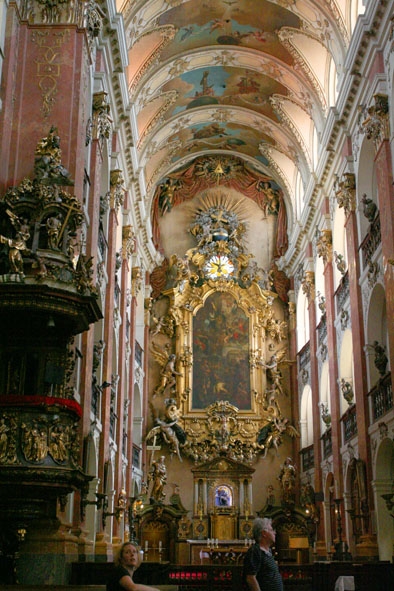 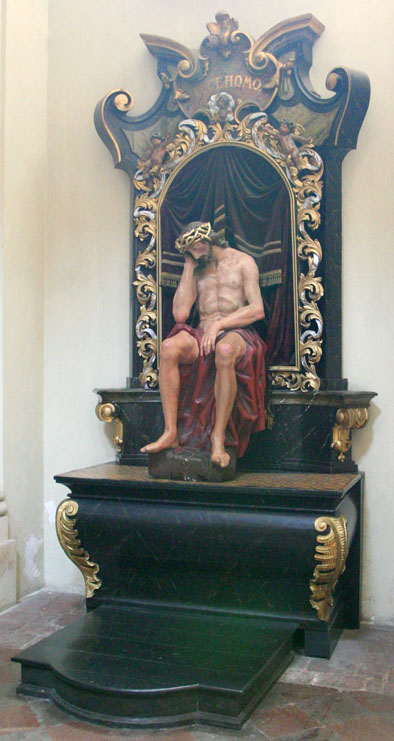 The ‘Jesus on the loo’ statue in rococo church 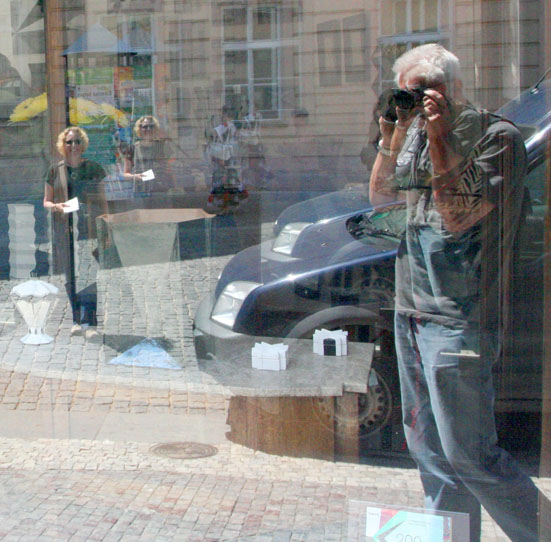 Went to a really cool Cubist café for crepes and coffee (man, the alliteration!) before winding our way to the New Town. Adored the wonderful examples of Art Nouveau architecture in the Municipal building and also the Alfons Mucha Museum (were disappointed that we didn’t actually get to look at the museum because we ran out of time, but little did we know that ahead in Warsaw at the National Museum there would be a touring Mucha exhibition we could see!). 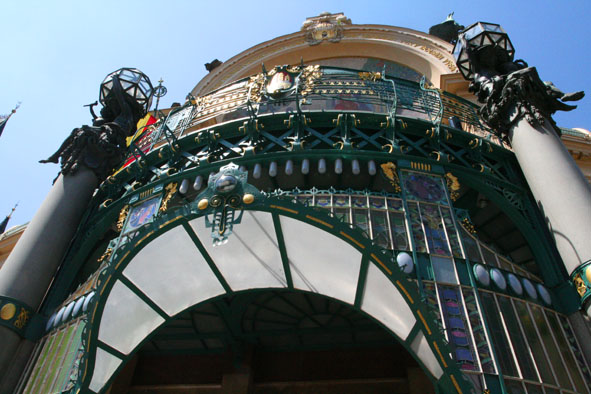 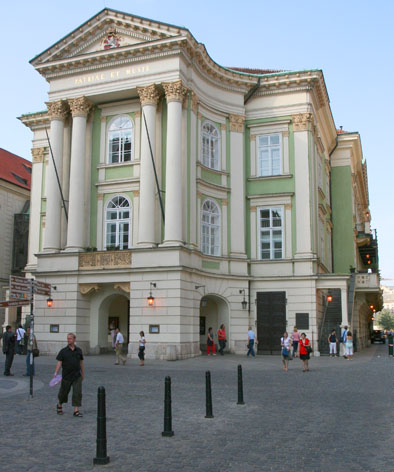 Had a fantastic time at the Mozart concert. Three musicians on oboe, bassoon and clarinet masterfully rendered familiar Mozart themes with accomplished mastery and relaxed wit. They were joined by two singers who delivered excerpts from Don Giovanni and The Marriage of Figaro. They were a delight to listen to and watch as they could not only sing but could also act and relate to their audience. The venue was a bonus as well as we sat in box seats in an ideal venue for this type of performance. The whole experience was a joy.

Inside the Estates Theatre 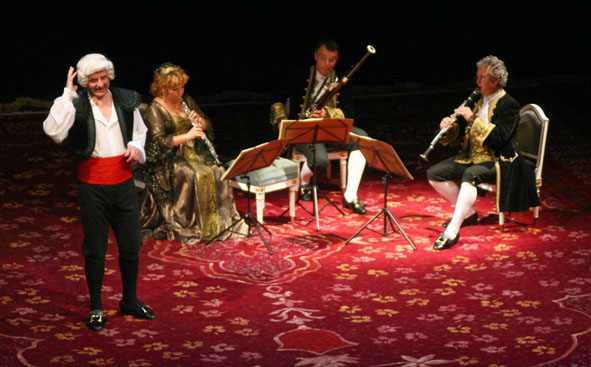 The ensemble who entertained us so wonderfully

Spent our final evening in one of the most beautiful cities in Europe strolling, talking, relaxing and…taking photos. It’s really going to be a shock to the system when it’s time to go home. 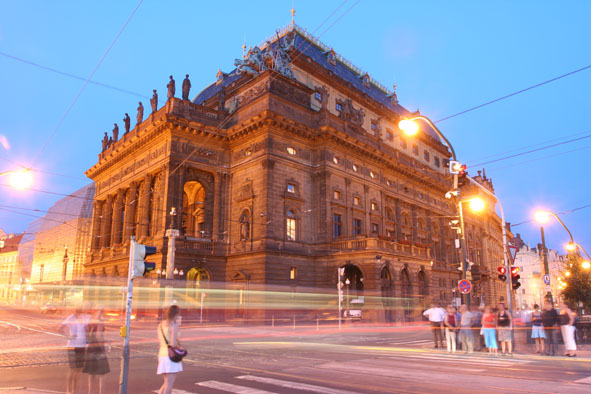 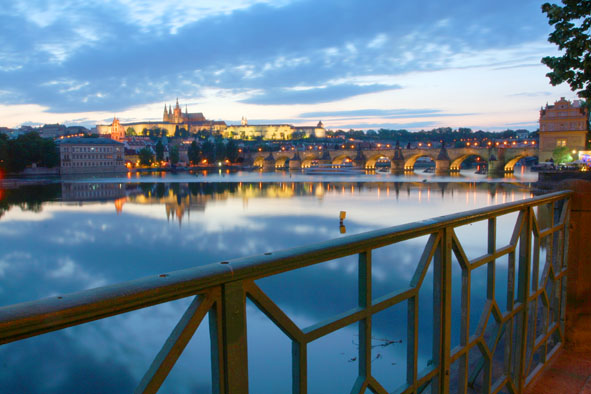 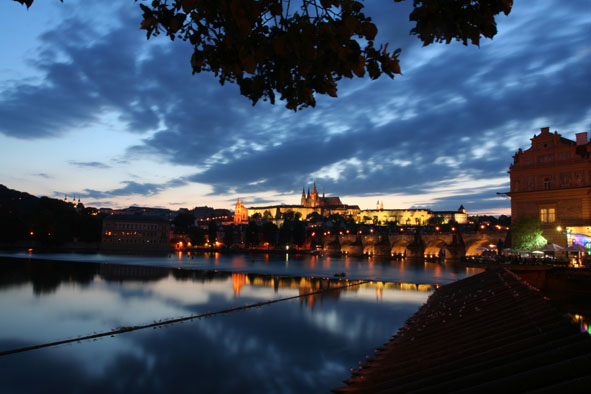