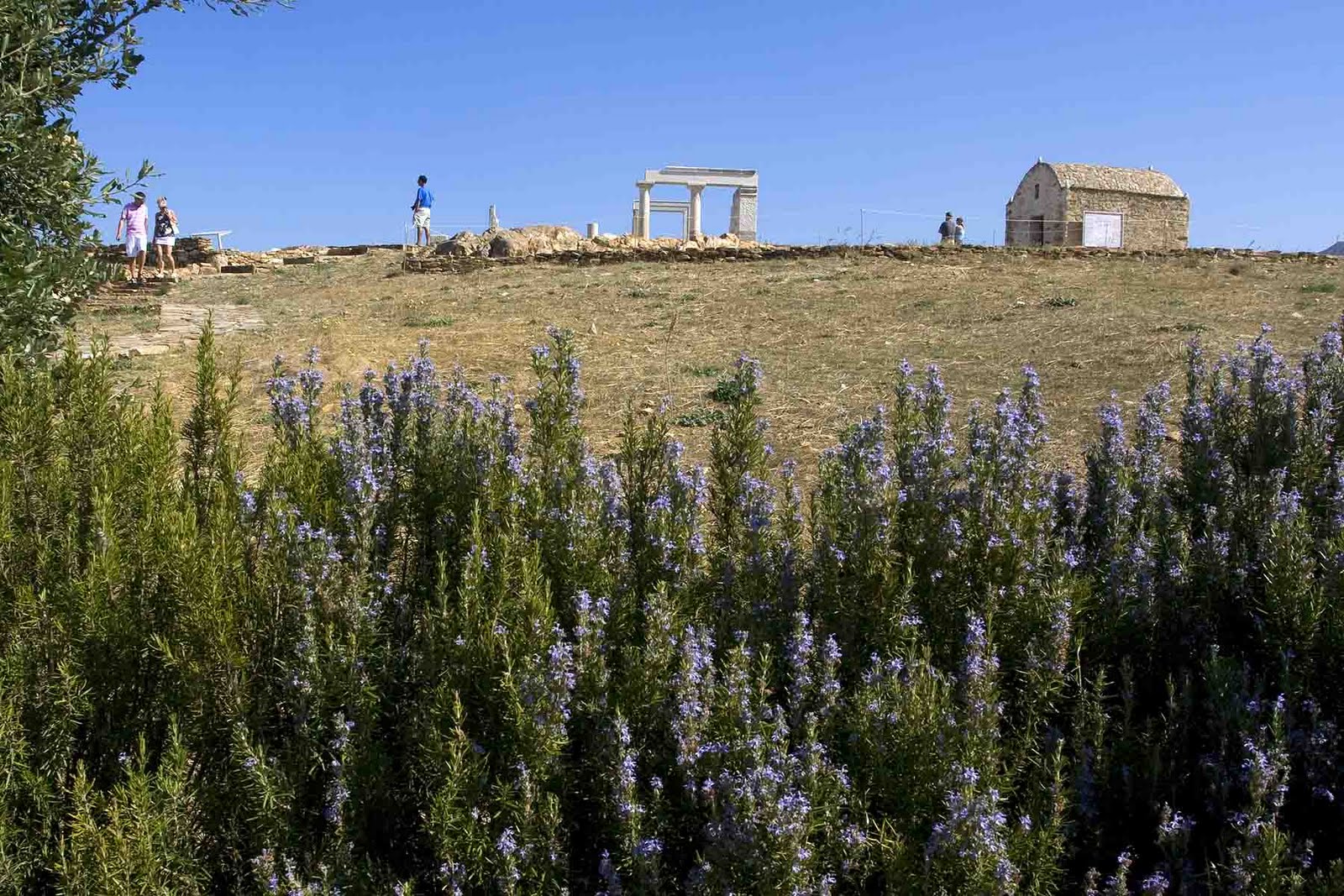 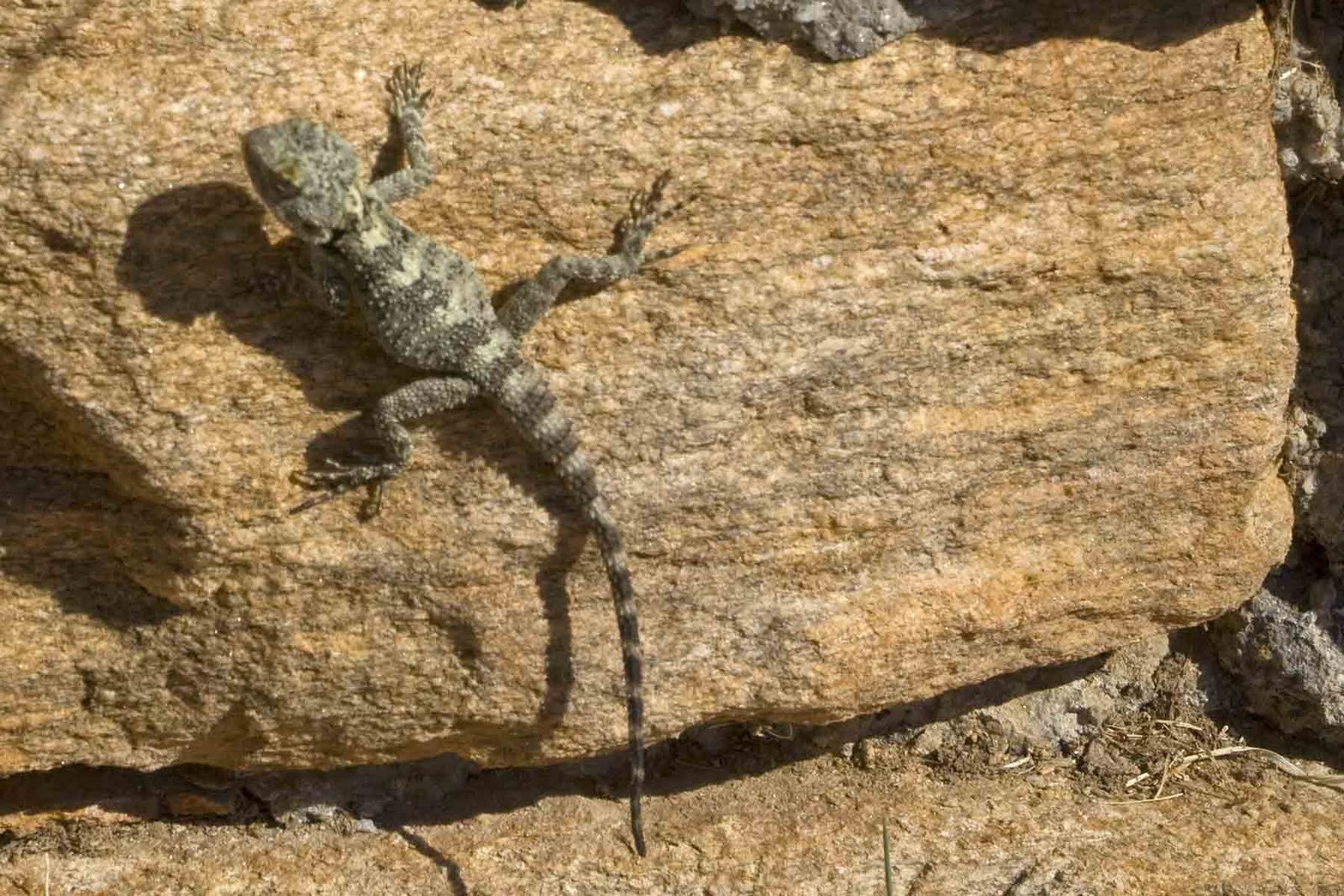 Little lizard basking in sun on ruins…”how’s the serenity?” 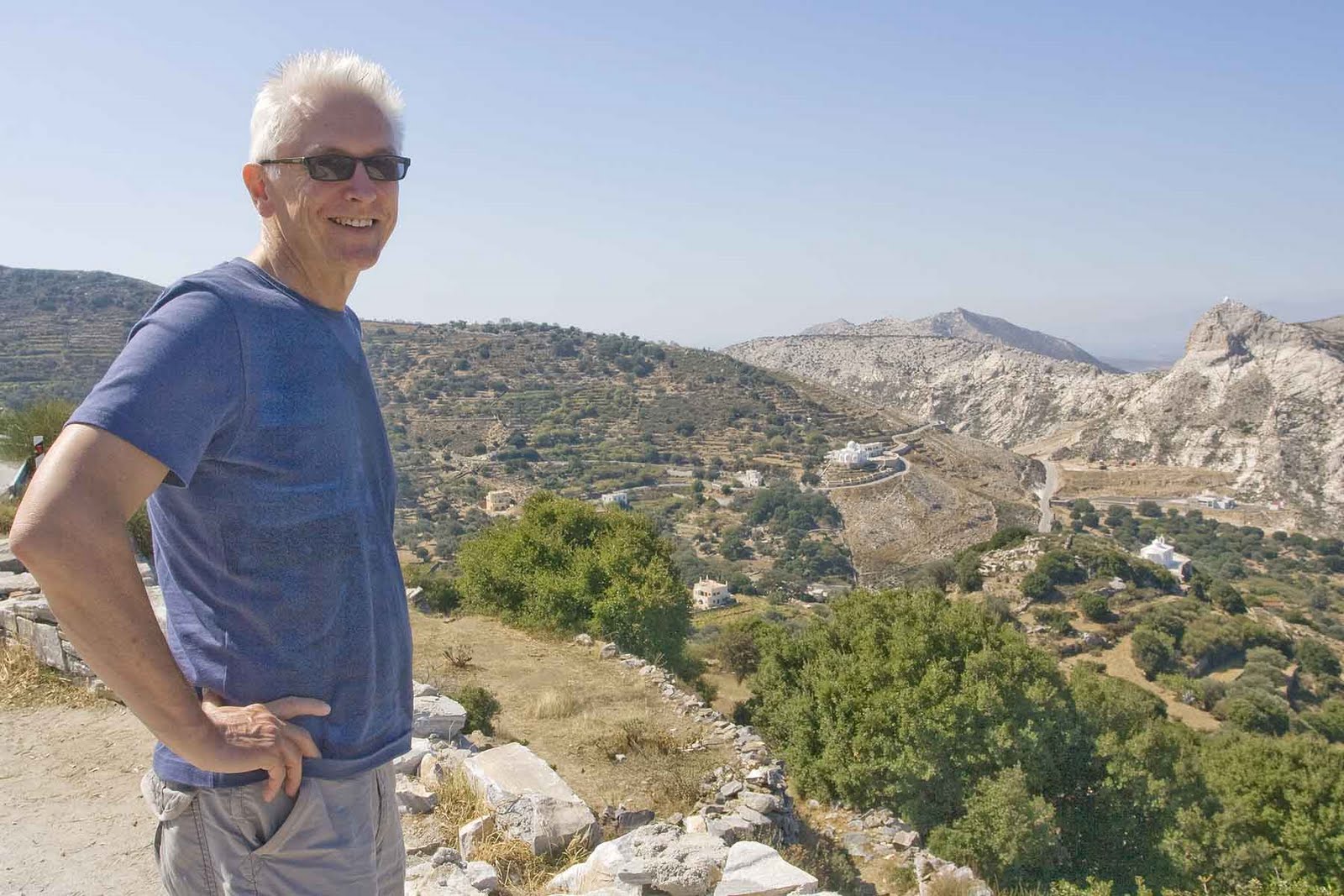 John, all relaxed and swarthy-like
Hired a car, with the help of our trusty Michailis (who steered us clear of the car hire rip-off merchants everywhere in the town). Went with a soft-top Suzuki Jimny – of which we didn’t take the top off, cause of the hot day and not wanting to burn! We followed the directions of our car hire guy and ditched our original plan of climbing Mt Zeus – as he said, who wants to hire a car and then spend the day climbing a mountain? So we didn’t! Instead, we explored the Tregea Valley. We found another Greek ruin – the Demeter’s ancient temple (yes, the ruins still have the power to leave us in awe), and meandered to a fabulous restaurant that Rough Guide said was the best on the island – Leftheri (in a village called Apiranthos). Pretty damned accurate! The baked, rolled eggplant with tomatoes and gruyere cheese was bliss! There was also a hint of the fine-dining in the presentation of the dishes, too. Complimentary homemade chocolates at the time of payment was an added bonus.

Fresco in Byzantine church in Chalki (centre of island) 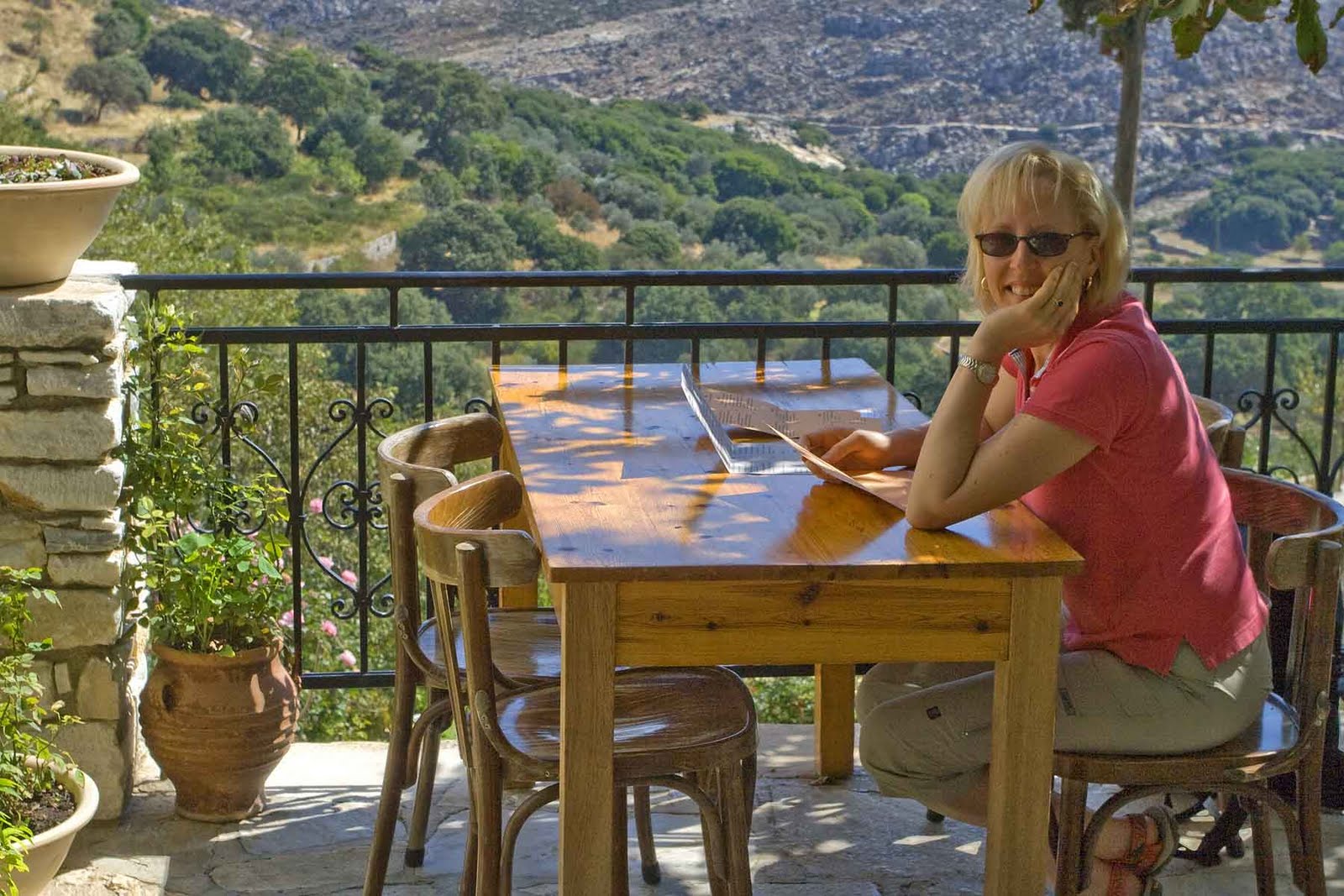 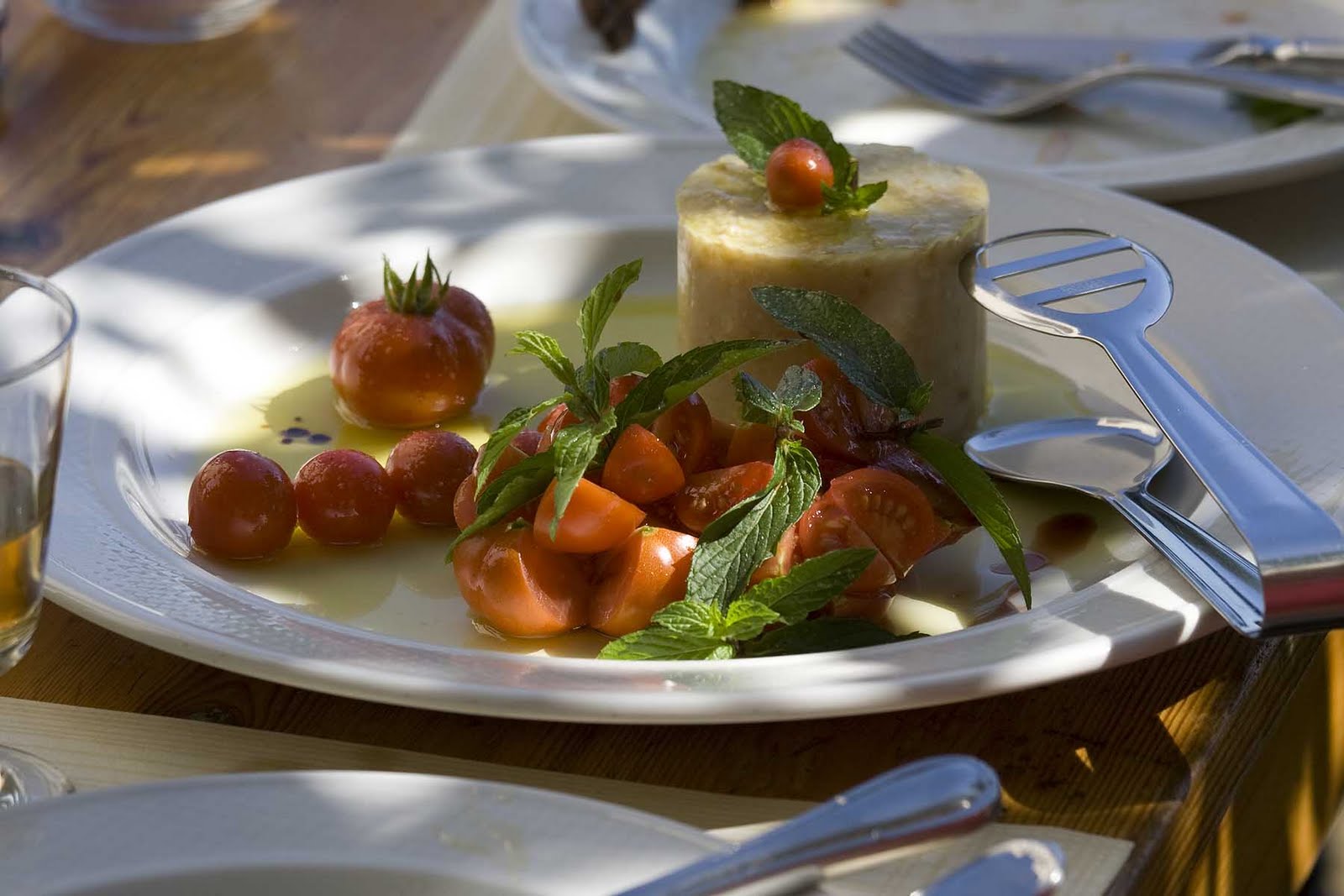 …and our groats, tomatoes and mint 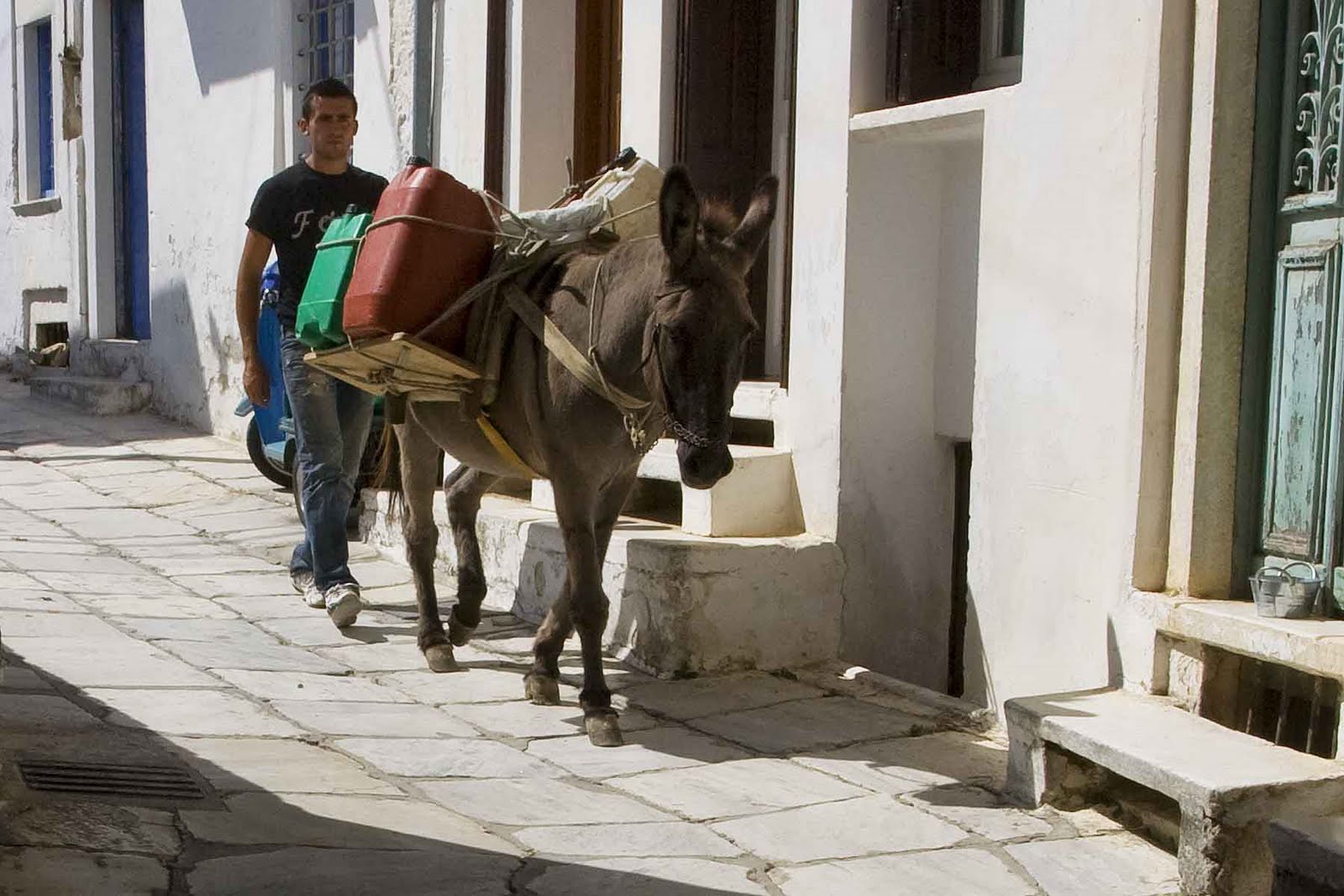 Man and ass….maybe the donkey shots are going to be like the bike shots of previous blog
Staggered back to car with that grogginess that comes from over-eating, really just wanting to find a shady corner and sleep it off like a bum. But we didn’t. We drove south on Naxos to a peninsular with a number of very under-populated beaches, with the intention of changing into cossies in the car/under towel and running into the sea like we were in a 70’s movie….or like we were 8! Came to realisation that we are neither 8 nor in a 70’s movie and instead decided to go back to the convenience of our own little St George’s Beach within spitting distance of our room, where one can change out of wet swimmers without being concerned about bearing arse to the world. 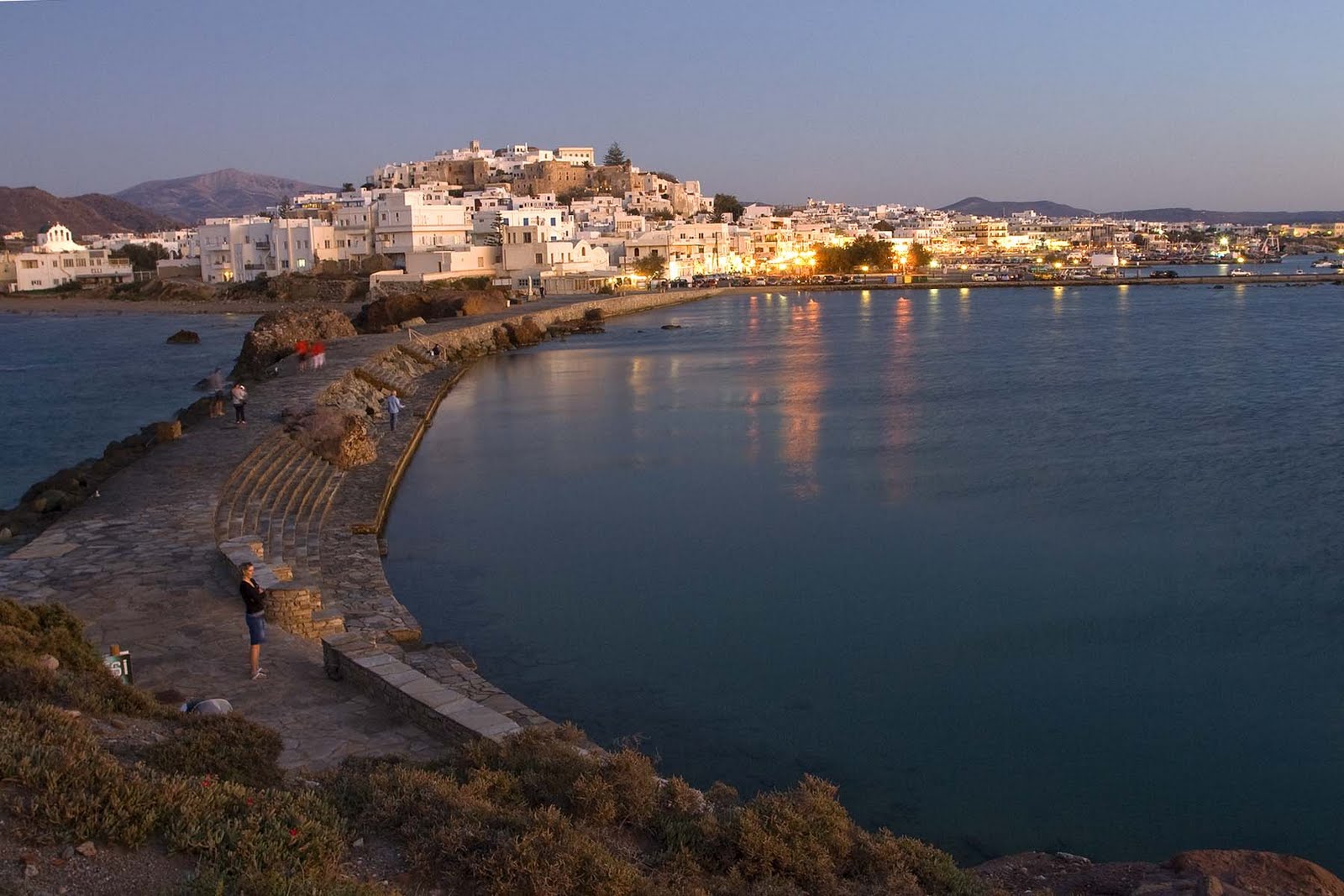 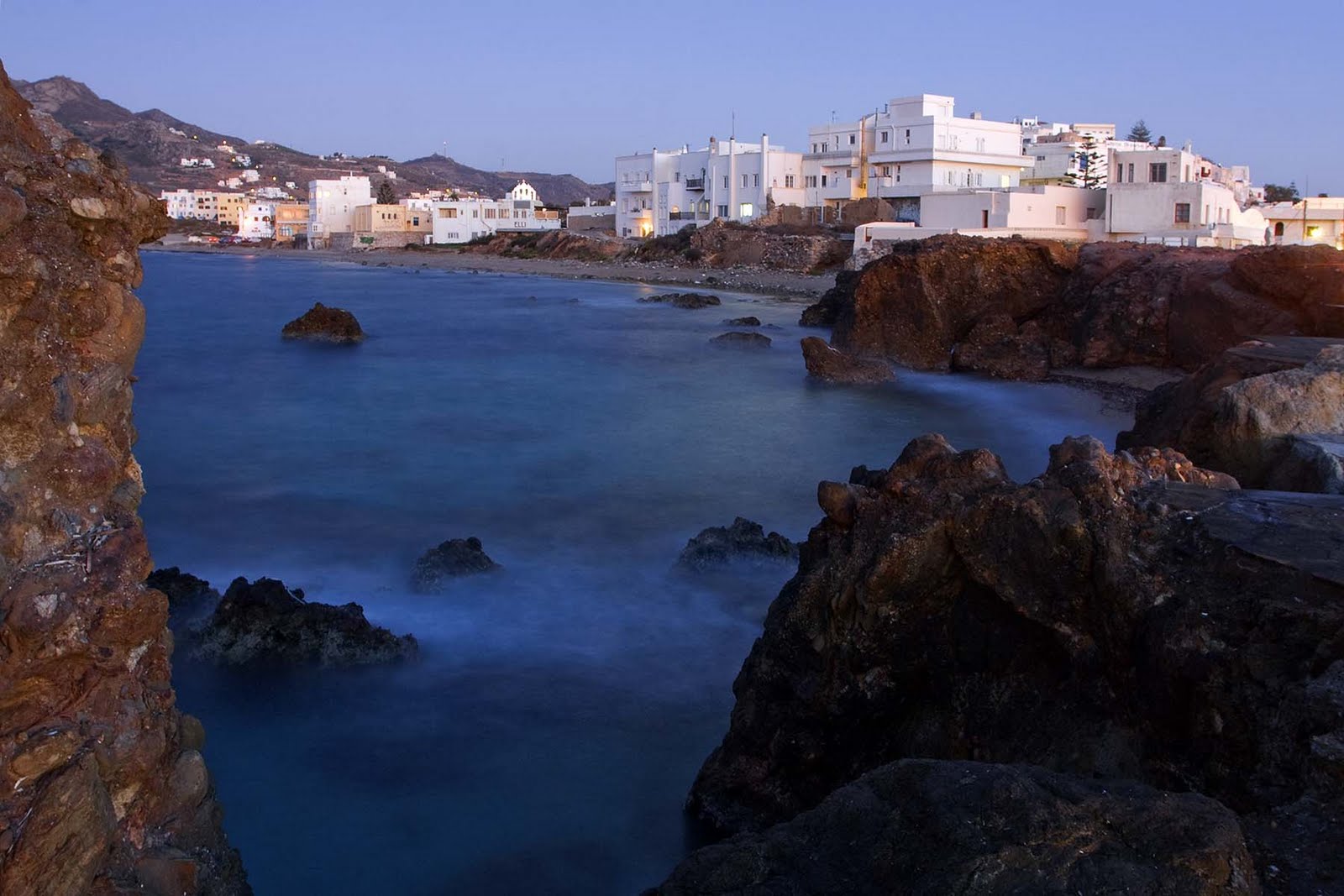 Spent the following couple of days (has it really been that long?!) just hanging out in Naxos Town, mixing it up with our own prepared meals in our little studio and the wonderful restaurant recommendations found on Trip Advisor and in various other guides. One wonderful thing we found on the mainland – 12 star Metaxa – we have not yet been able to duplicate at the price we found in Sparta. In fact, don’t think we can get it at all in Australia, so must keep trying here! Chris and David, you will LOVE it! 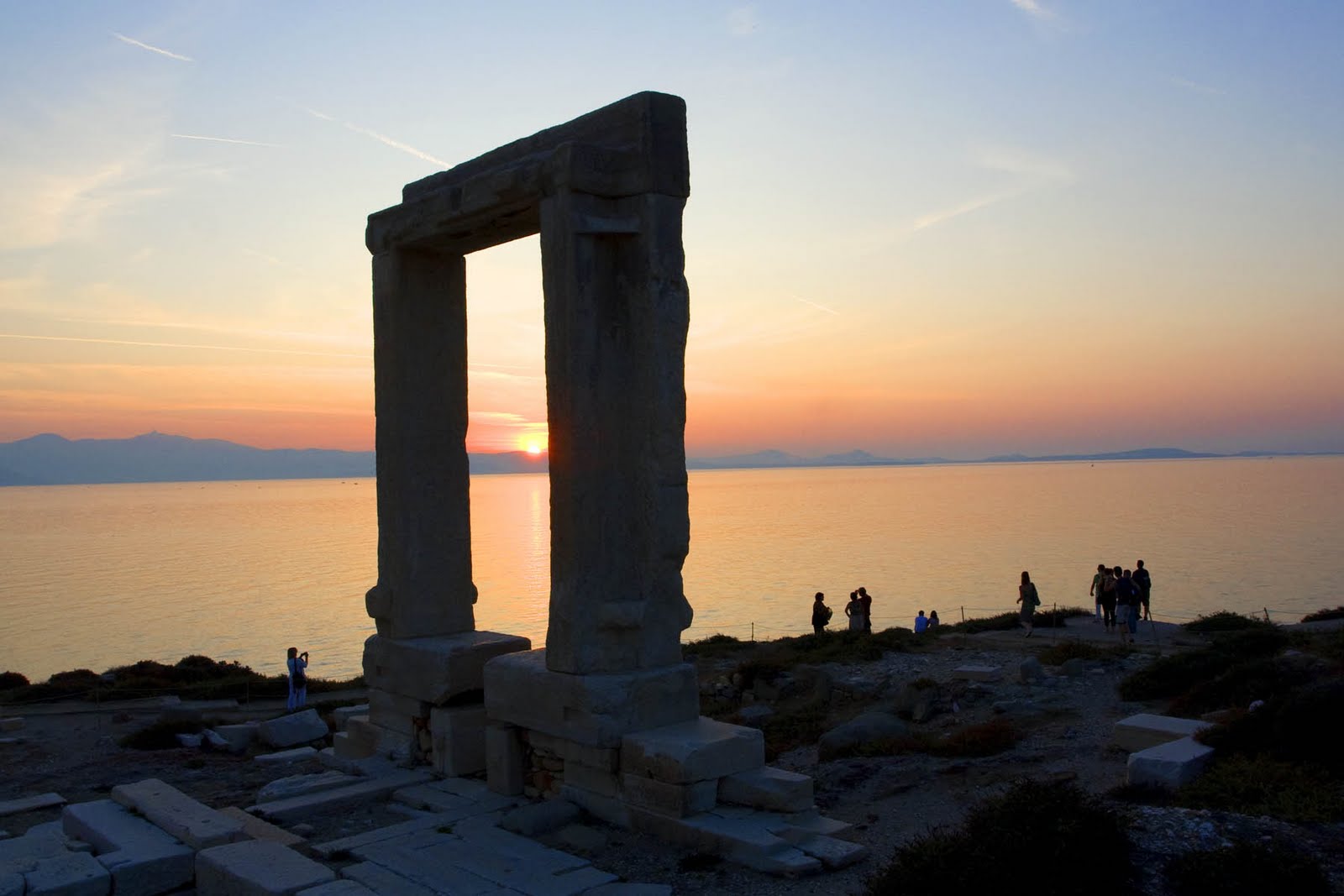 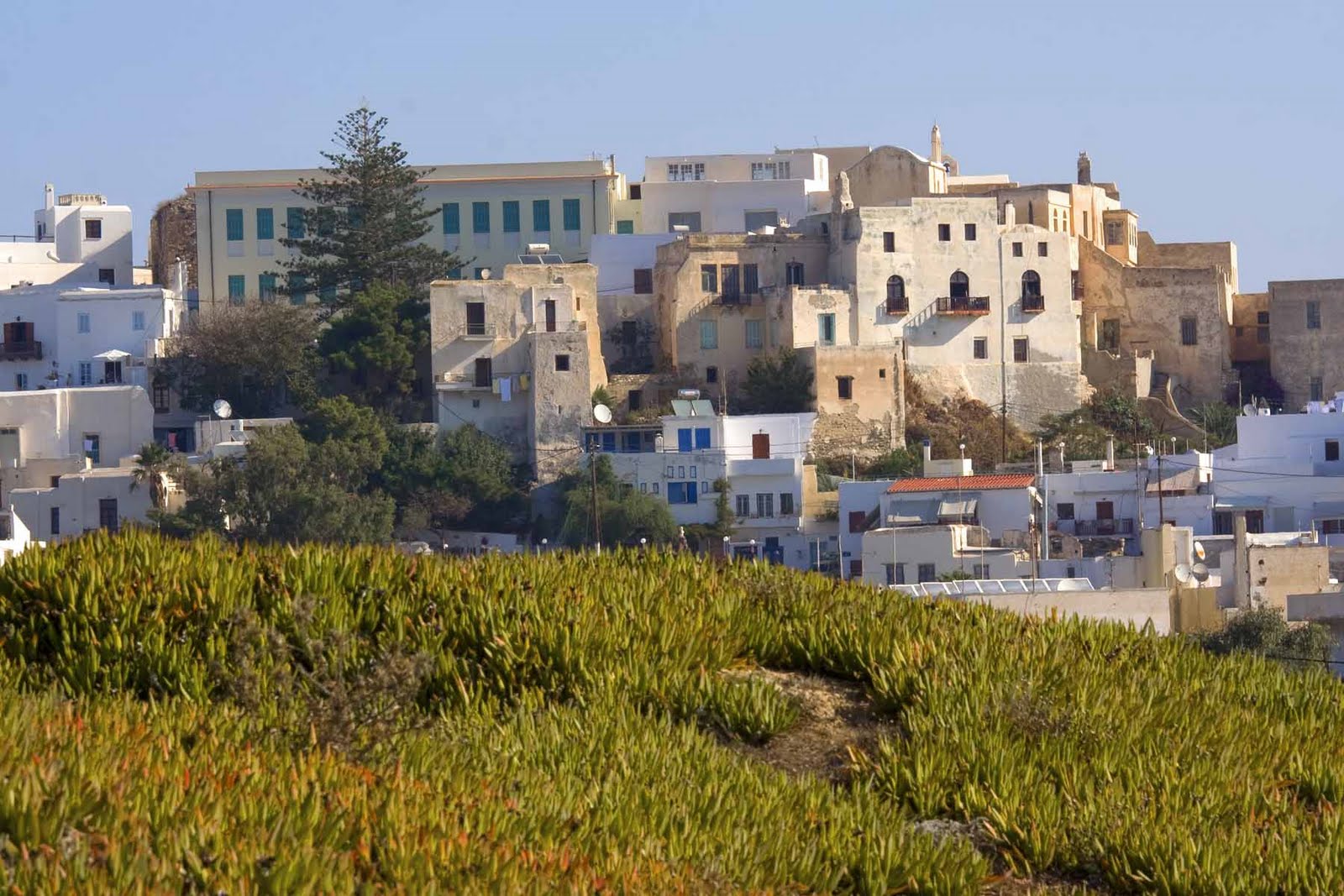 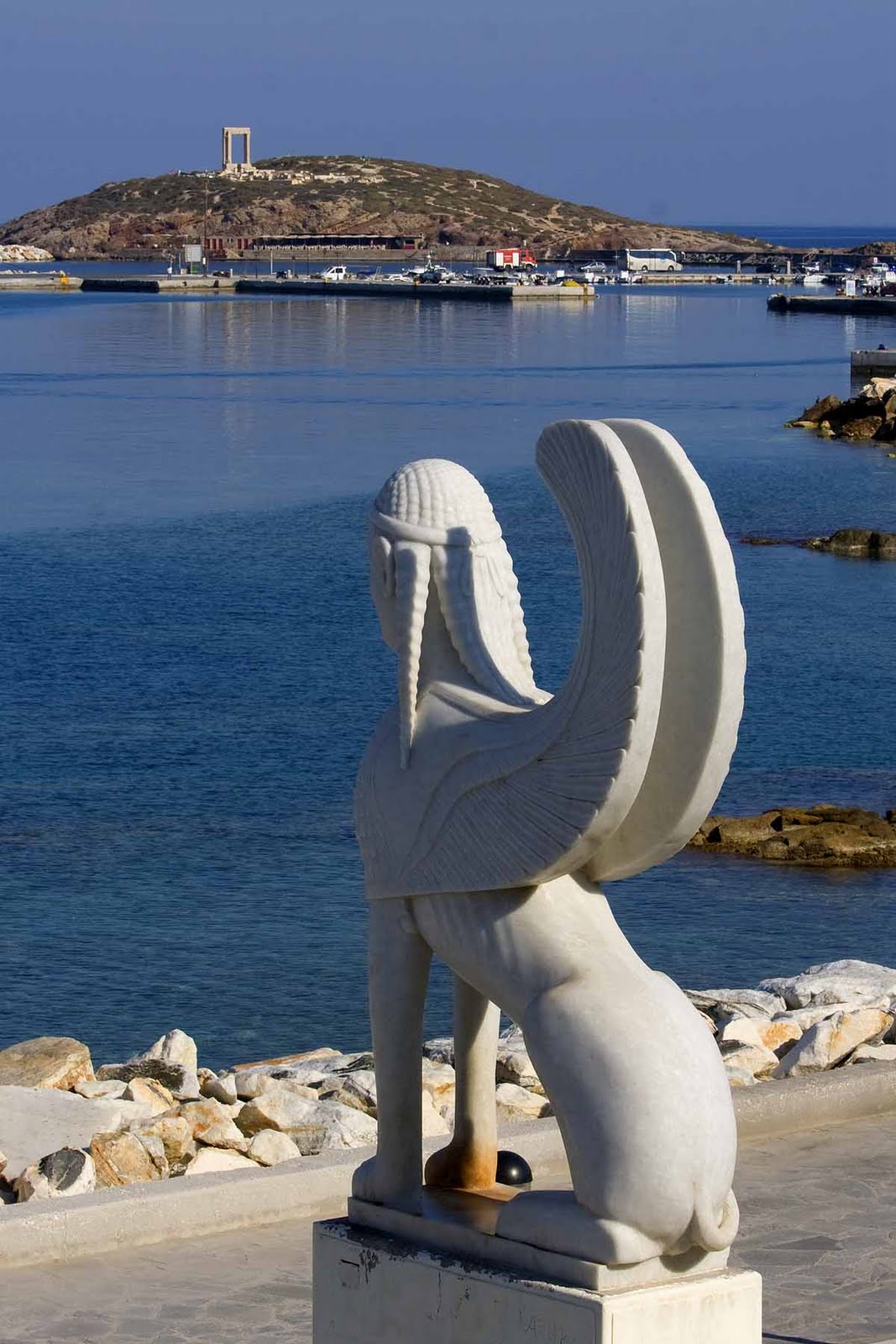 Sphinx and Temple of Apollo (this sphinx is a replica of the one Naxos made as a gift to Delphi a couple of millennia ago)
We watched a beautiful sunset from the hill that houses the Temple of Apollo, along with quite a few other people, all jostling for THAT moment with the sun sinking between those marble ‘door frames’. Most of us just enjoyed the view. But luckily, John is patient and talented, and we ended up with some pretty magical pics. Not looking forward to the reported ‘argy bargy’ that goes on at Oia on Santorini to watch the same sun set into the same sea! 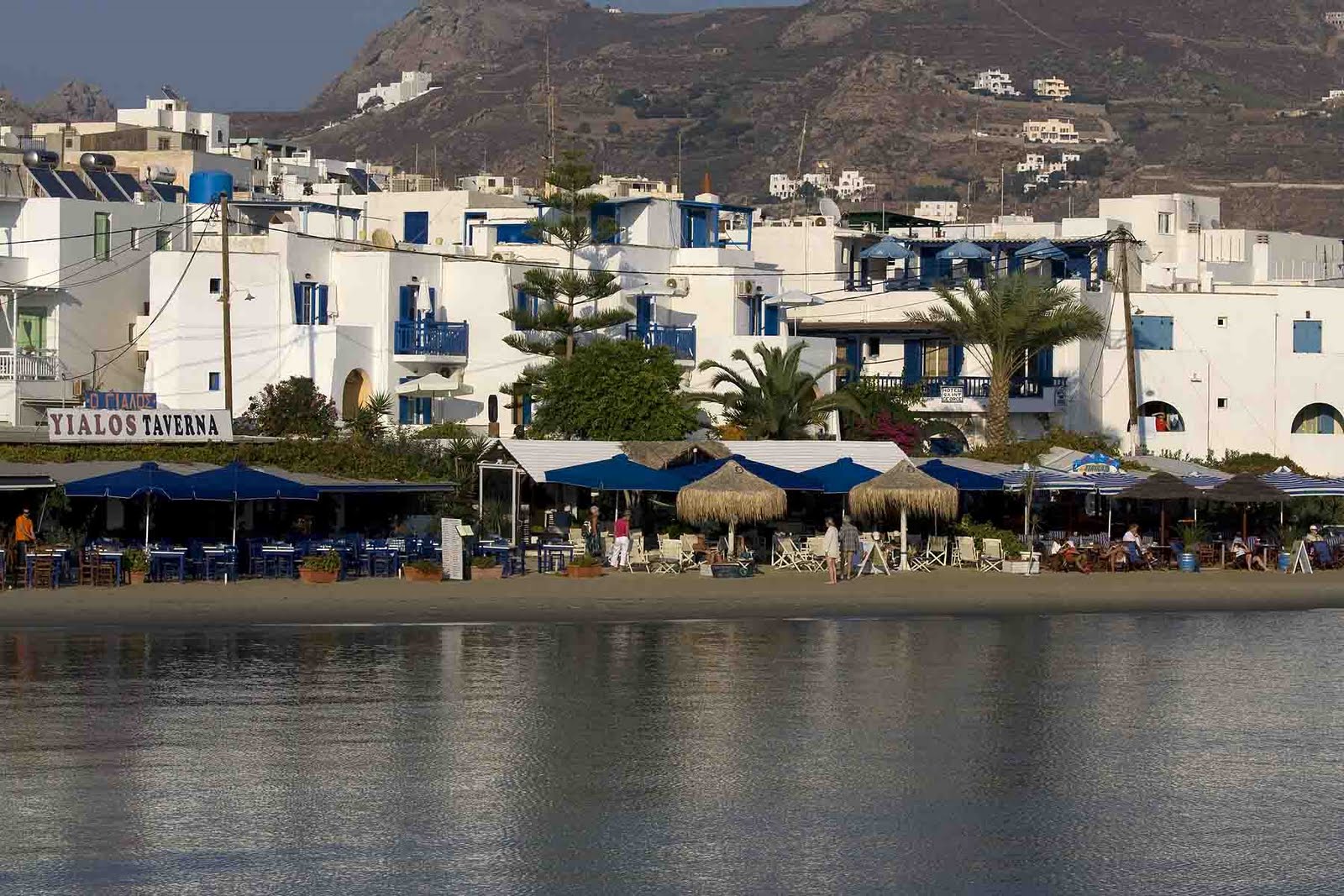 Cat fishing
Our final days on Naxos have been very peaceful ones. Our initial impressions of ‘How gorgeous is this?!’ have not faded. We have, in fact, grown fonder of the largest speck in the Cyclades and already dream about coming back here. Could not recommend this place highly enough. Its strong Greek traditions are still apparent, but it also caters to us wandering tourists very well. We have both been so very impressed with the Domus Festival that runs from April to October every year, hosted by the family who have lived in the kastro for 300years (they run the festival with absolutely no funding from the council/government). Our second dose of the festival, our jazz concert, was as equally thrilling and satisfying as our first classical concert. For both experiences, the music was of a very high calibre, and the host was funny, gracious, and liberal in his sharing of the family cellar! 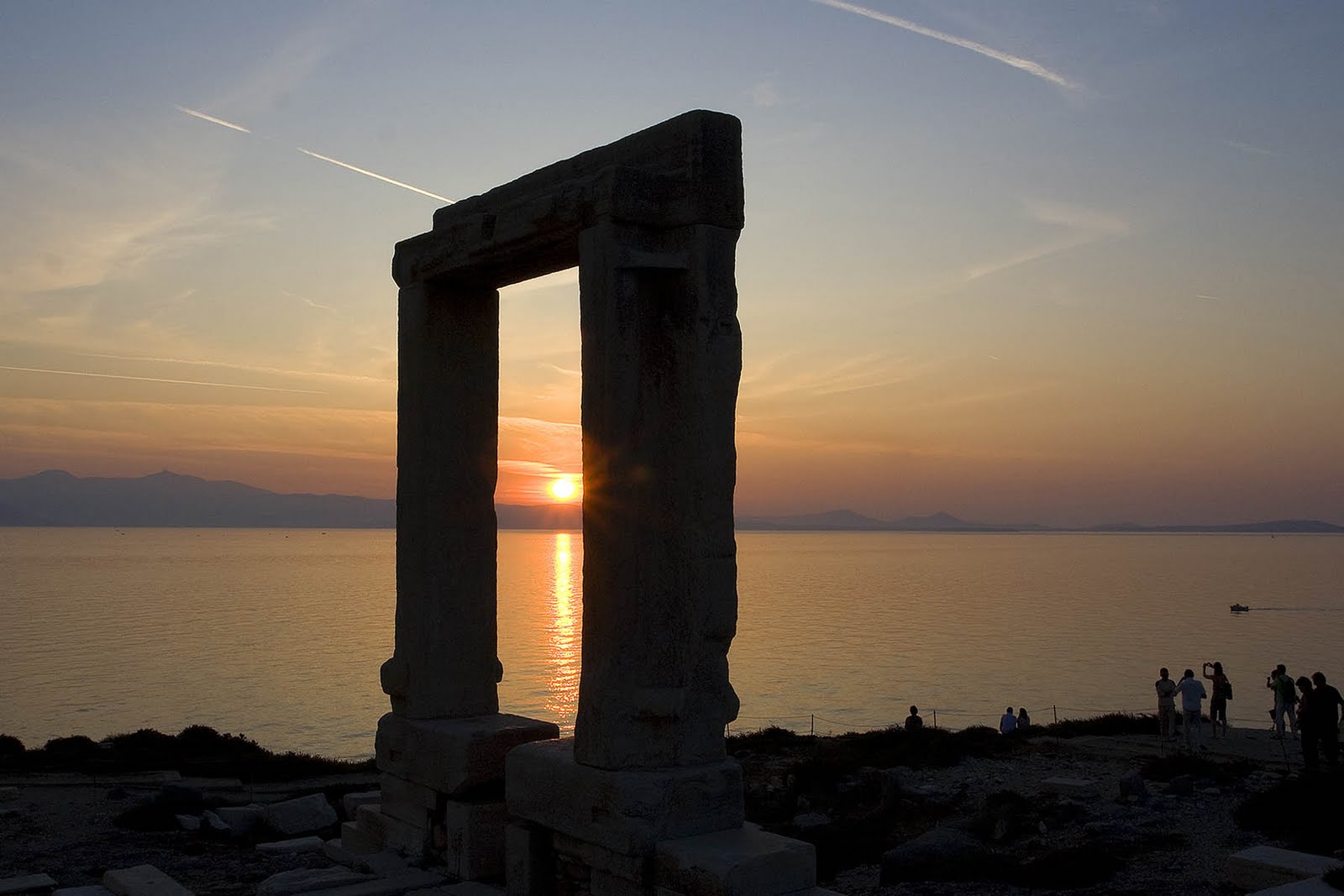 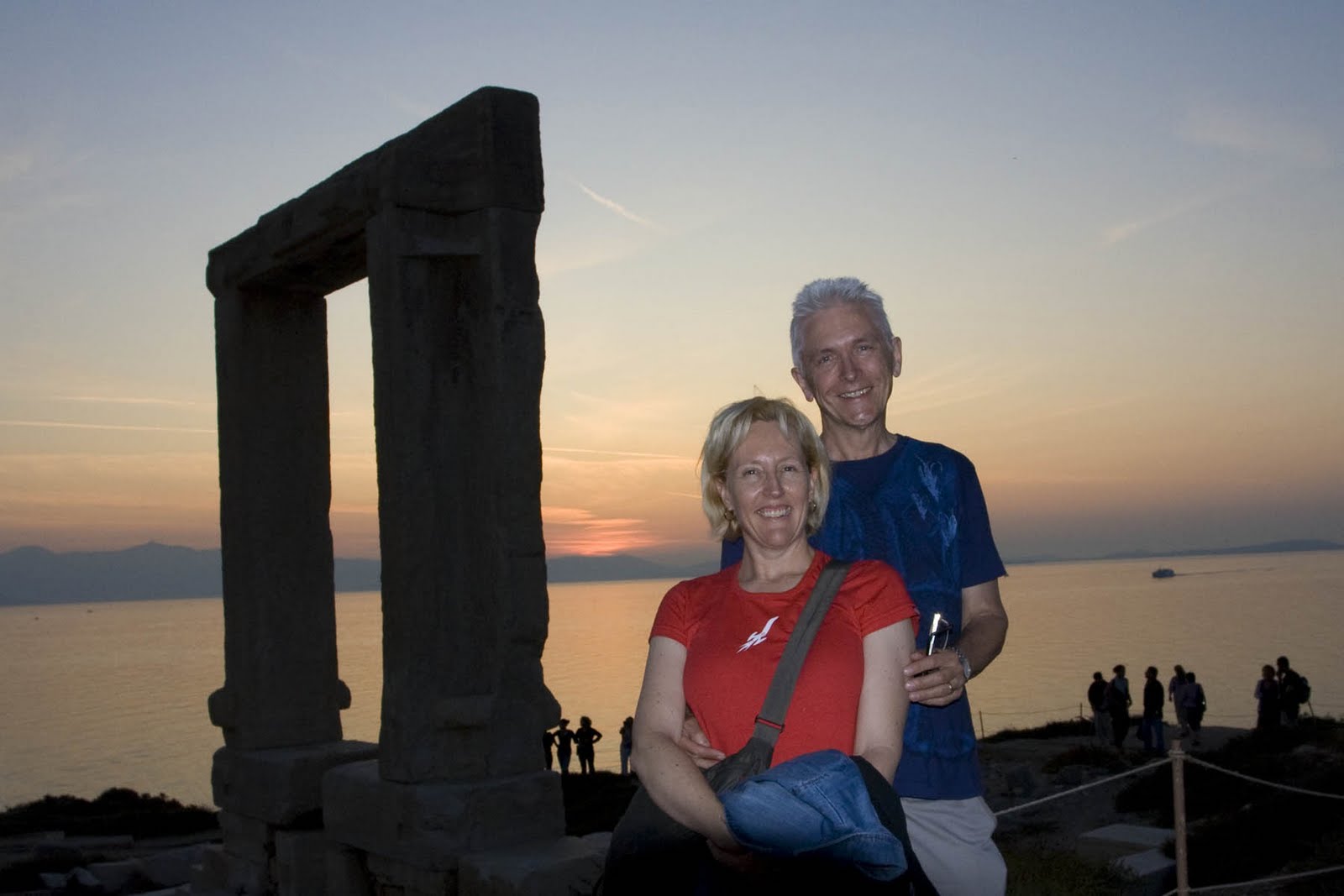 Nic and John being very ‘touristy’ 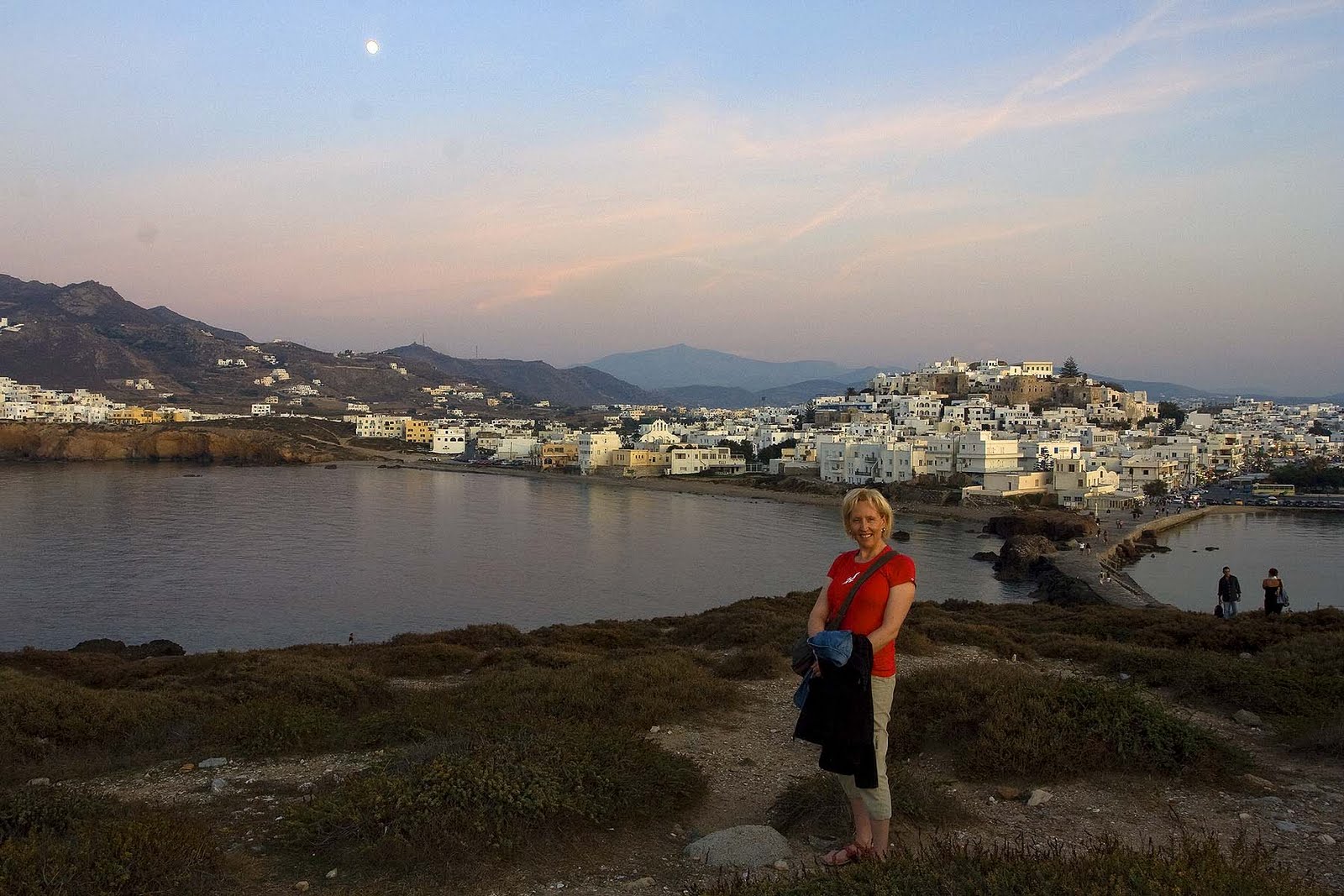 Nic, the moon and Hora in the fading light
Our most memorable meal on Naxos would have to be a little restaurant called Enetiko, which hovers above the crush of other bars, restaurants and cafés along the waterfront. The entrance is a little difficult to find, but definitely worth the effort. We had the most wonderful view of the sunset over the heads of all those below us, and complimented this scene with the most delicious, and inventive, Greek food we have had to date. The service was impeccable, yet warm and friendly, and they finished the night with a complimentary serving of a light, creamy coconut cake delicately drizzled in maple syrup. Now a free dessert is often thrown in at some establishments, along with a slug of ouzo. But on leaving, they gave us a little BOTTLE of the stuff, not just a shot! Very nice! 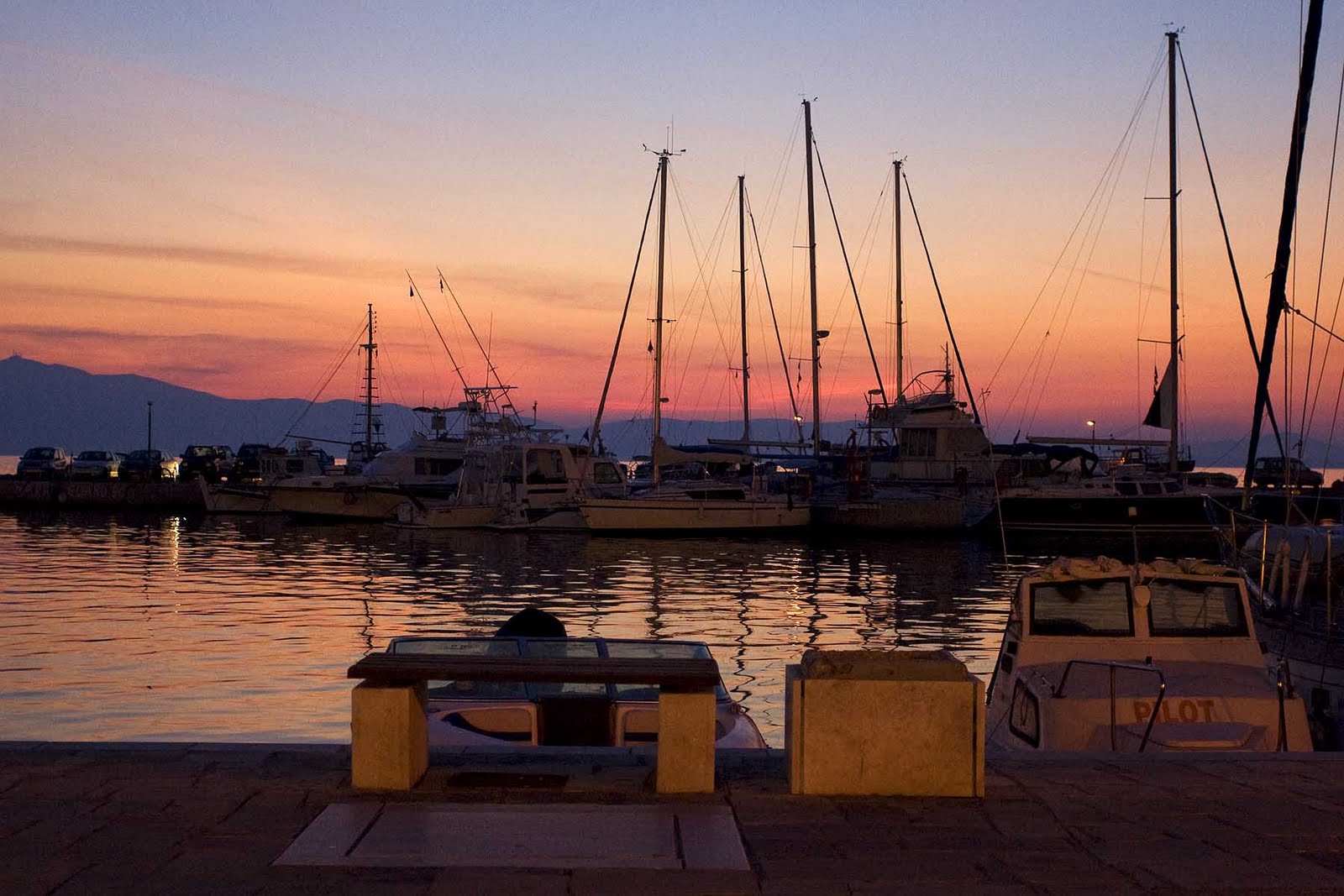 Now, THIS is how the wealthy see the Greek Islands

Part of the old kastro
Well, Santorini is our next stop. Hope we have access to internet to keep you all up to date on our travels. 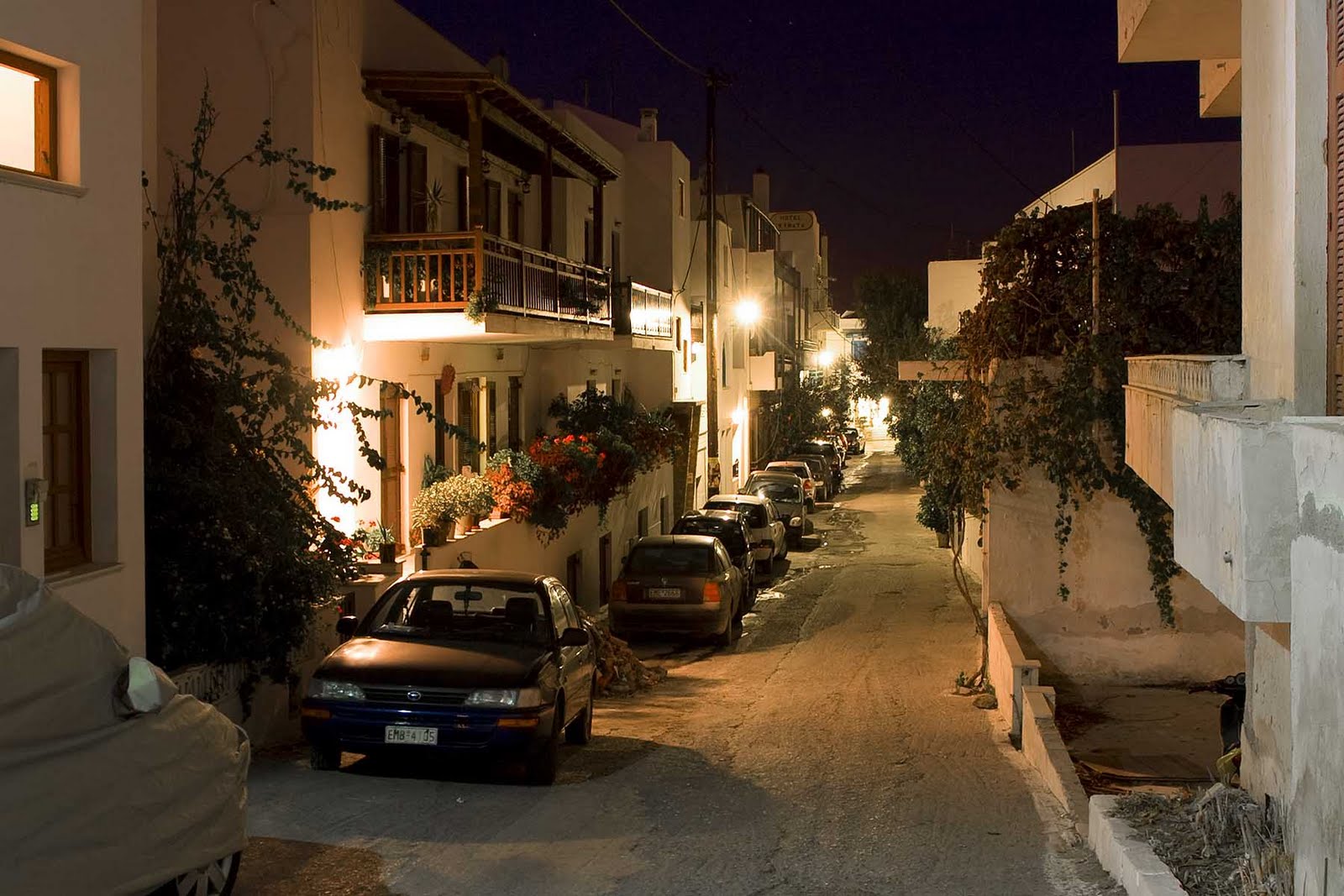 The street behind our apartment 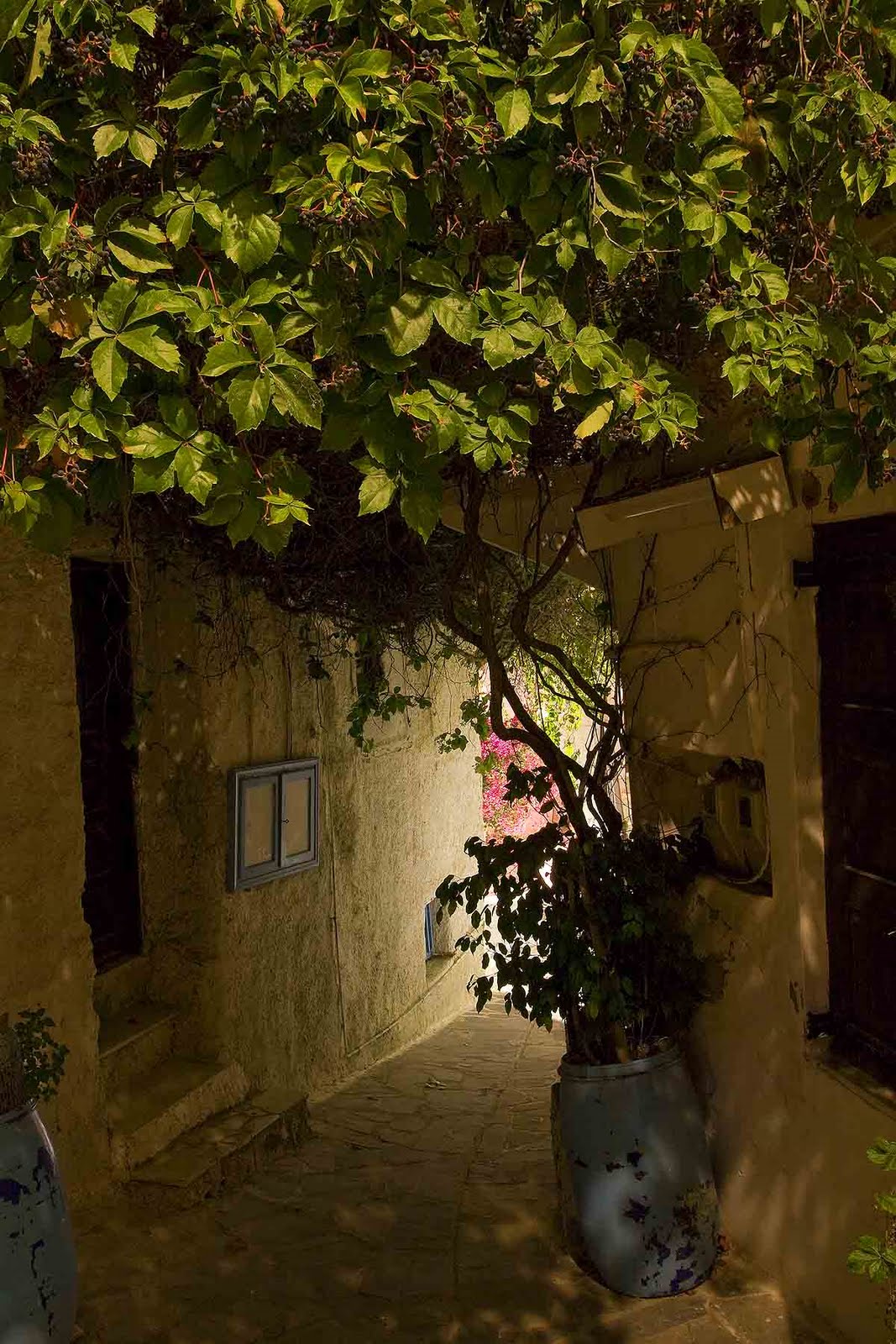 Street in the old town