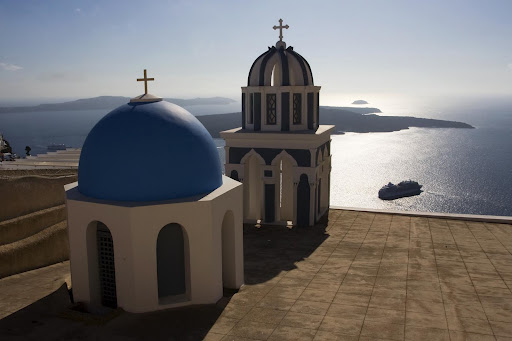 These picturesque little domes were right next to our B&B 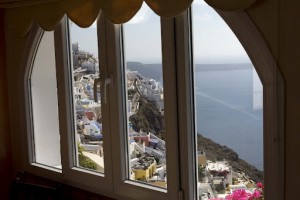 View from our breakfast table at Villa Maria Damigou

First impression of Santorini is of houses stuck on the side of a hill like limpets and hordes of annoying tourists clamouring to enjoy the Gucci sunsets, including the view of the half dozen or so ‘Luna Park’ lit cruise ships in the harbour. To be on Santorini for 2 nights and continue to think that this is all there is, is failing to appreciate the natural beauty of the island and its caldera, and the people who live and work there. 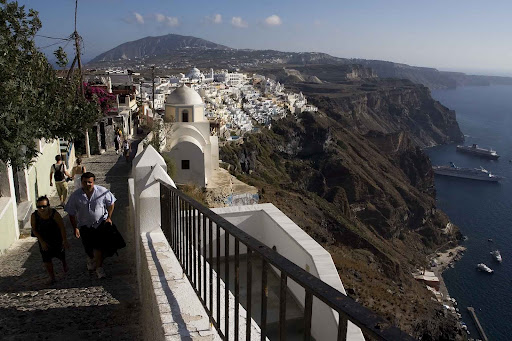 The clifftop walk to Fira 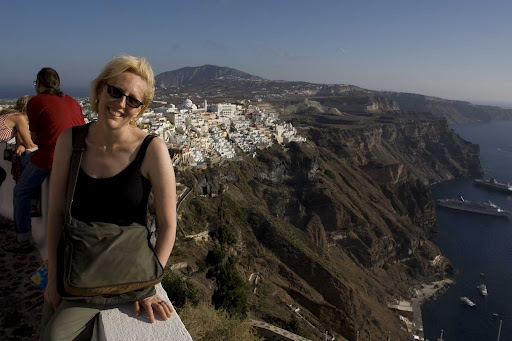 Nic on cliff with Fira in distance and cruise ships below
We did not get to see a lot of this island in our short visit, but we enjoyed what we crammed into a day and a half. We arrived by ferry mid afternoon and survived our formula-one drive up the hair-pin bends in our taxi (quickly buckling up as he put his ‘pedal to the metal’) and were deposited promptly at our B&B in Firostefani (just east of the capital Fira) – Villa Maria Damigou. What an oasis in the middle of a fast and furious ‘see it, must have it, buy it’ mentality of the tourism of this most famous island. Our haven was beautiful and immaculate (in design and cleanliness), and our host sweet, competent, and very helpful. 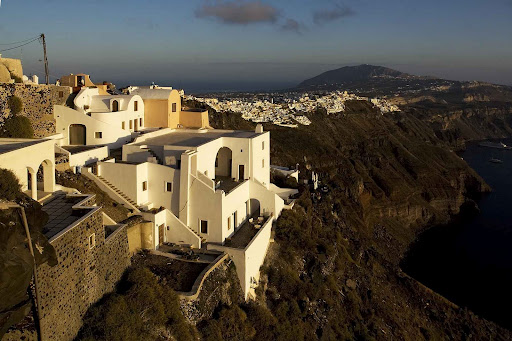 More of the above, only in late afternoon light
We headed east to Imerovigli for the sunset (forgoing the crush at Oia at the northern tip of the island) and enjoyed the views (but average food) of Blue Note restaurant. John had ample opportunity to run from the dinner table and snap off a few shots and then run back before Nic ate all the perch in tomato and garlic sauce. After dinner we walked carefully back to our room along the clifftop path, with caution to protect ankles on cobblestones as well as to protect shoes from the doo-doo of a variety of animals! 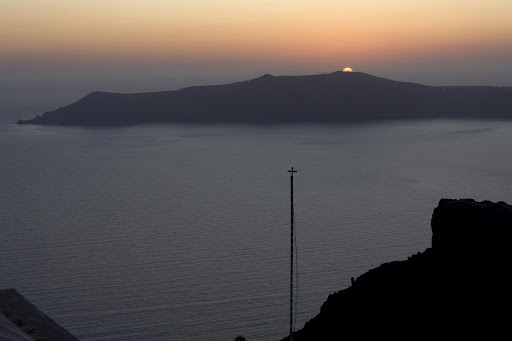 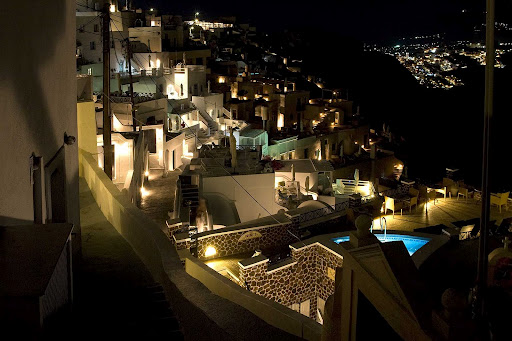 The walk back to our room after dinner
We slept well that night with the sound of the wind on the clifftops, replacing the lapping waves of Naxos, to shepherd us off to dreamland. A leisurely rise was in order the next day (thinking of the early flight the following morning meant we savoured it even more!), and we slowly got ourselves moving and spent the morning exploring the capital of Fira, along with rest of the crowds. We wandered through the narrow streets dodging the donkey doo and drooling over the bling in the jewellery shops. Nic found a gold Piaget watch for only €22,000 (!!), but we thought avoiding debtors prison was a wiser option, so we left it with the very adept sales assistant at the pretty shop, ‘Nick the Greek’. 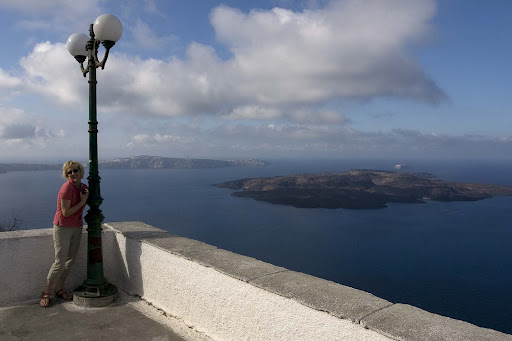 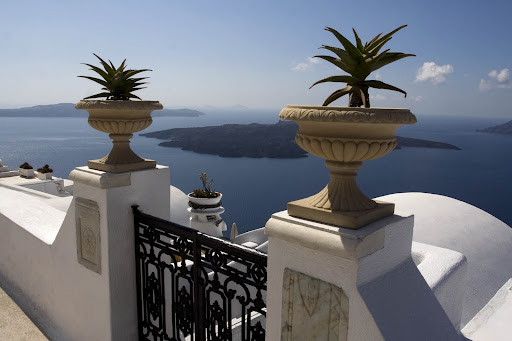 Postcard shot
After a picnic lunch in our lovely room, we walked all the way down to the old port of Fira, past eager donkeys searching for passengers (seriously!) to meet our ship ‘Thalassa’ for our sunset cruise. EXPLANATION: As we were walking down the many steps to the port, there were groups of donkeys making their way to the top, most with tourists astride. But in each group there would be at least one donkey without a load who would cross over to Nic on the wide path and expect her to get on! Charming, cute little scammers! (Although, technically, most of them were mules – half horse, half donkey – but charming all the same.) 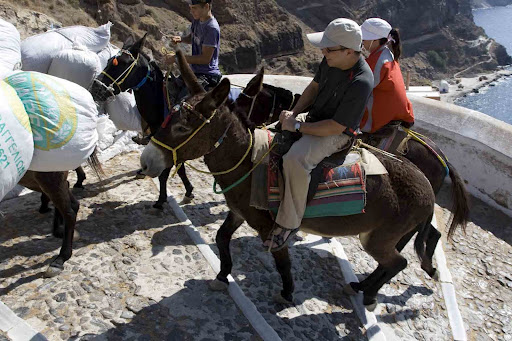 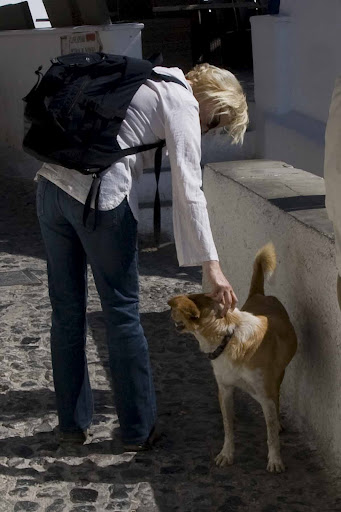 Nic making friends
At the port we scuttled aboard our vessel with the eagerness of school kids looking for the best seats on the bus. Once found we breathed easily and made friends for the afternoon with the people nearest us, and traded our stories. The ship was relatively new, but modelled on the ships of a more glamorous and romantic era with its 2 masts and crew of fit brown Albanian sailors (made to carry 120, but with only 30 passengers on board). Our first stop on our cruise was the volcano in the middle of the caldera. We hiked to the top of this beast (Néa Kaméni), pausing at the individual craters of its many different eruptions, listening to our knowledgeable and witty guide, and gapping at the history of this monster in the middle of the sea. The walk was about 2km each way and it was really quite surreal, almost like a moonscape with the black rock and ground pumice everywhere (a very good precursor to another rather arduous walk to come).

Nic doing a bit of walking on the moon 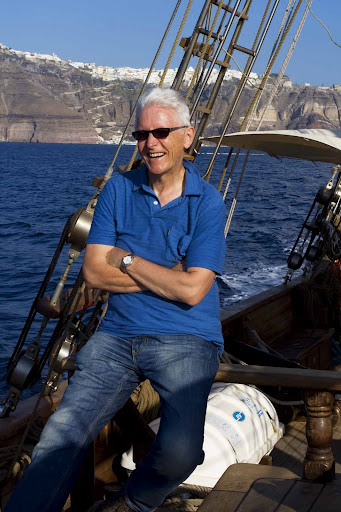 John having a great time
Back on board after how hike to the summit, we sailed to the sulphurous ‘hot springs’ near the mouth of a cove on Paleá Kaméni (another tiny island right next to the main group of craters in the middle), and swam to shore through the warming waters – although they so WEREN’T hot, just warm patches like a giant had taken a big pee just upstream from you! But, man, it was fun diving from a sailboat!! 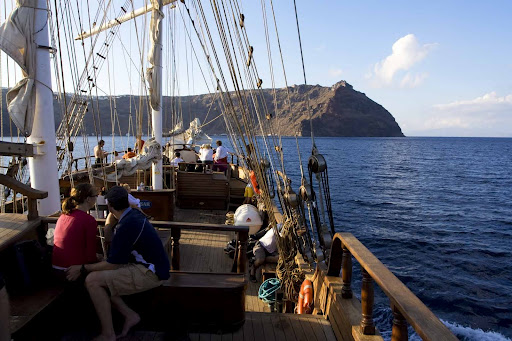 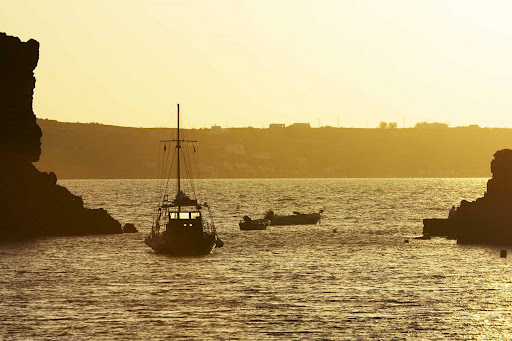 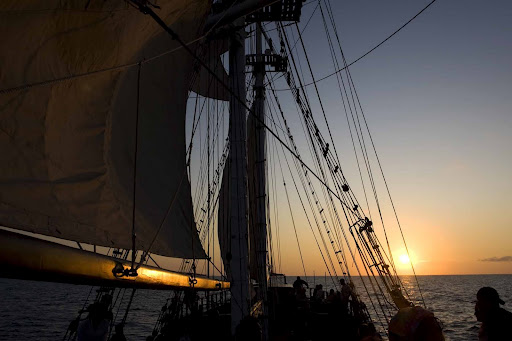 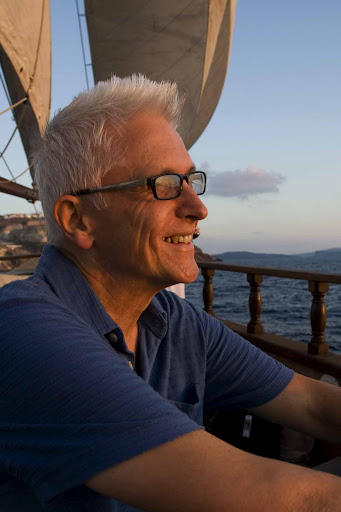 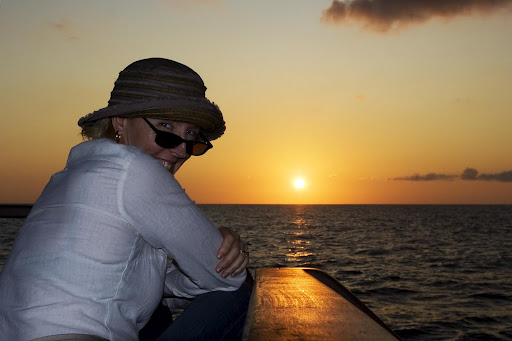 Nic and one of the best sunsets ever! 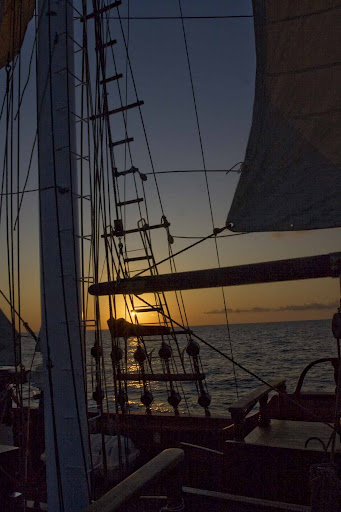 Sails and sea
By the time we were dried and fully clothed again, we were dropping anchor just off the shore of the second largest island of the group near Santorini, called Thirassia. We were plied with wine of Santorini (in a wonderful Australian invention – the cask!) and feasted on a variety of mezes (appetizers). As the sun began to set, we approached the ports near Oia under full sail as a saxophonist played and we all sighed and ‘ahhed’ and took our holiday pics. It was a very relaxed and sated group of people who disembarked back at the port of Fira, 5 hours from when we first set sail. This calmness, however, was fairly short-lived as the 30 people morphed back into the eager school kids trying to be the first to get a seat on the cable car back to the top. There was NO WAY any of us were going to walk up those 300 (?) steps in the dark!

Listen…it sizzles as it hits the water