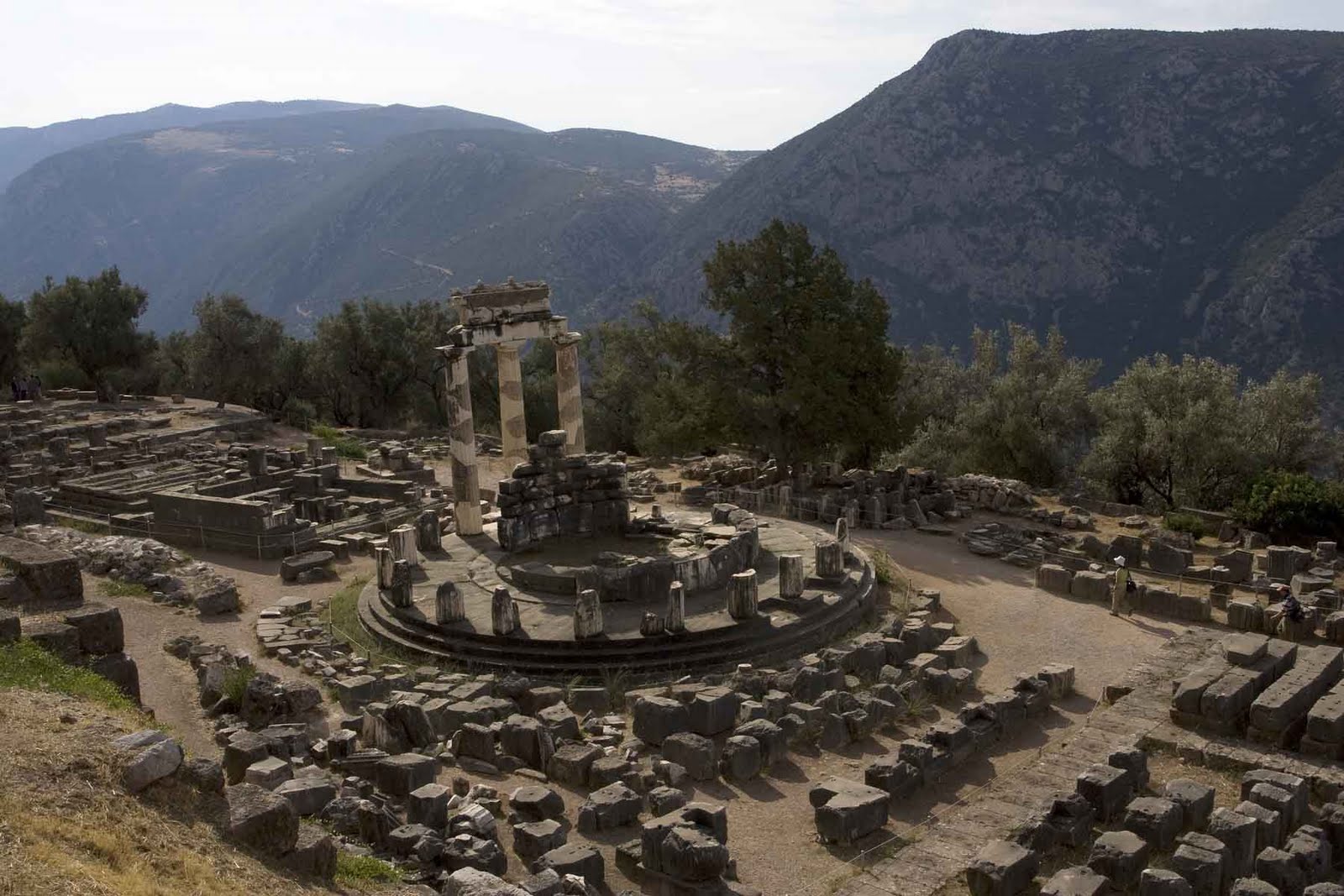 Tholos at Delphi
The first interesting moment of the day was following our trusty GPS’s instructions and attempting to get onto a major road via an incomplete slip road! Confused and flabbergasted (I mean, why only HALF build an ‘on ramp’?!) we just kept heading in the general direction of Delphi (basically east) and finally found an alternate route. Stupid decision to not finish major road works! 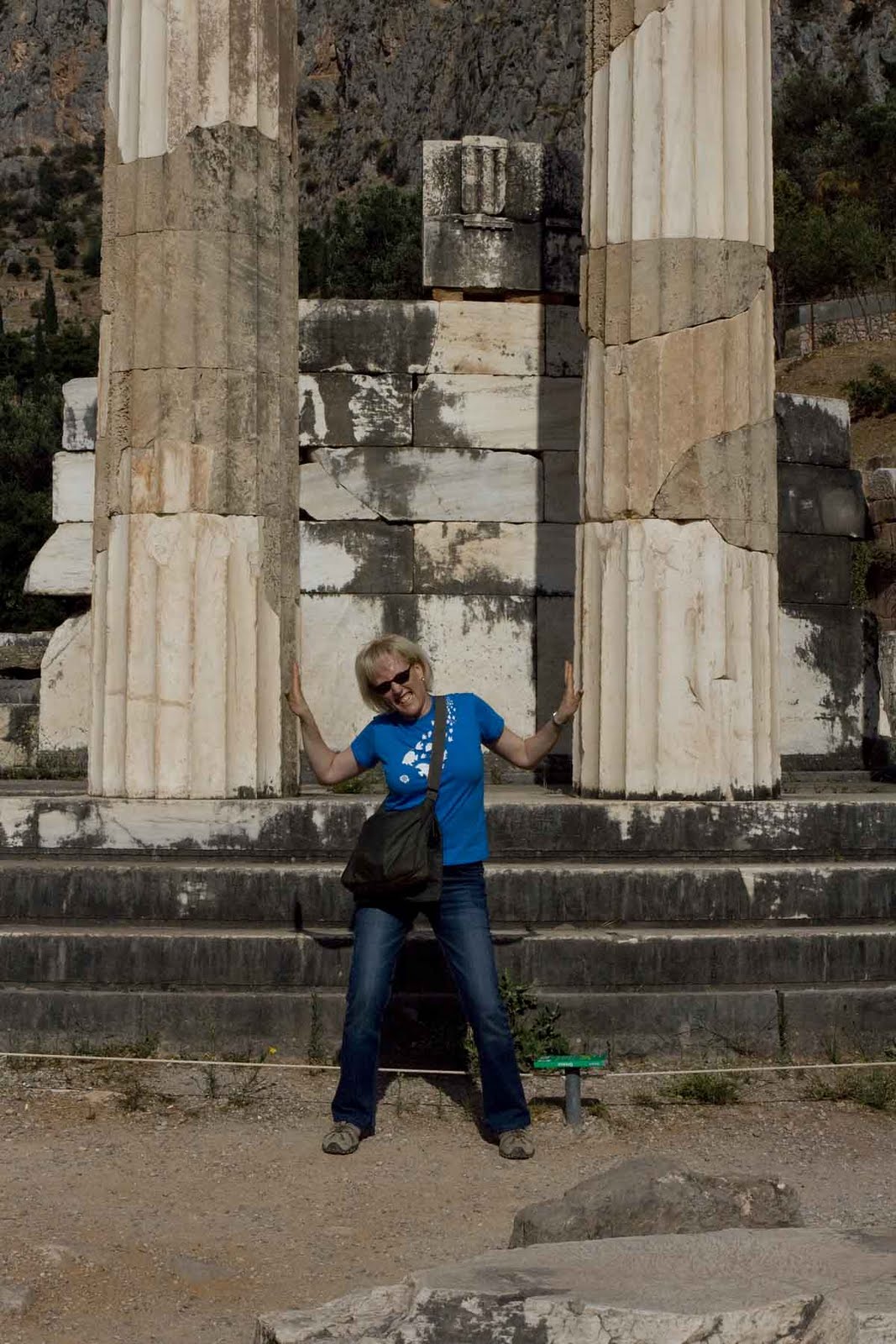 Pushy Nic
Found Delphi and found shady spot for car – improvement in day already. Discovered that entrance to the major site at Delphi was free due to “technical problems”. Now what kind of technical problems can an ancient site have? The revolving restaurant wasn’t working? Whatever these “problems” were, we were unable to venture further than the treasuries, which meant we were able to see the wall that was the base of the Temple of Apollo, but we weren’t able to get anywhere near the temple itself, or the oracle, or the theatre, or the stadium. We did manage to see, in a separate part of the ruins, the lovely Tholos near the old Temple of Athena (very famous and oft photographed piece – round with 3 columns still standing, or rather, reinstated). Also visited the museum and saw the jewel in the crown – the life sized bronze statue of the Charioteer of Delphi (478BC). This piece is so precious because the only reason it still exists is it was buried in an earthquake and so survived the pilfering that went on for hundreds of years. It is the only thing like it of the Archaic period. 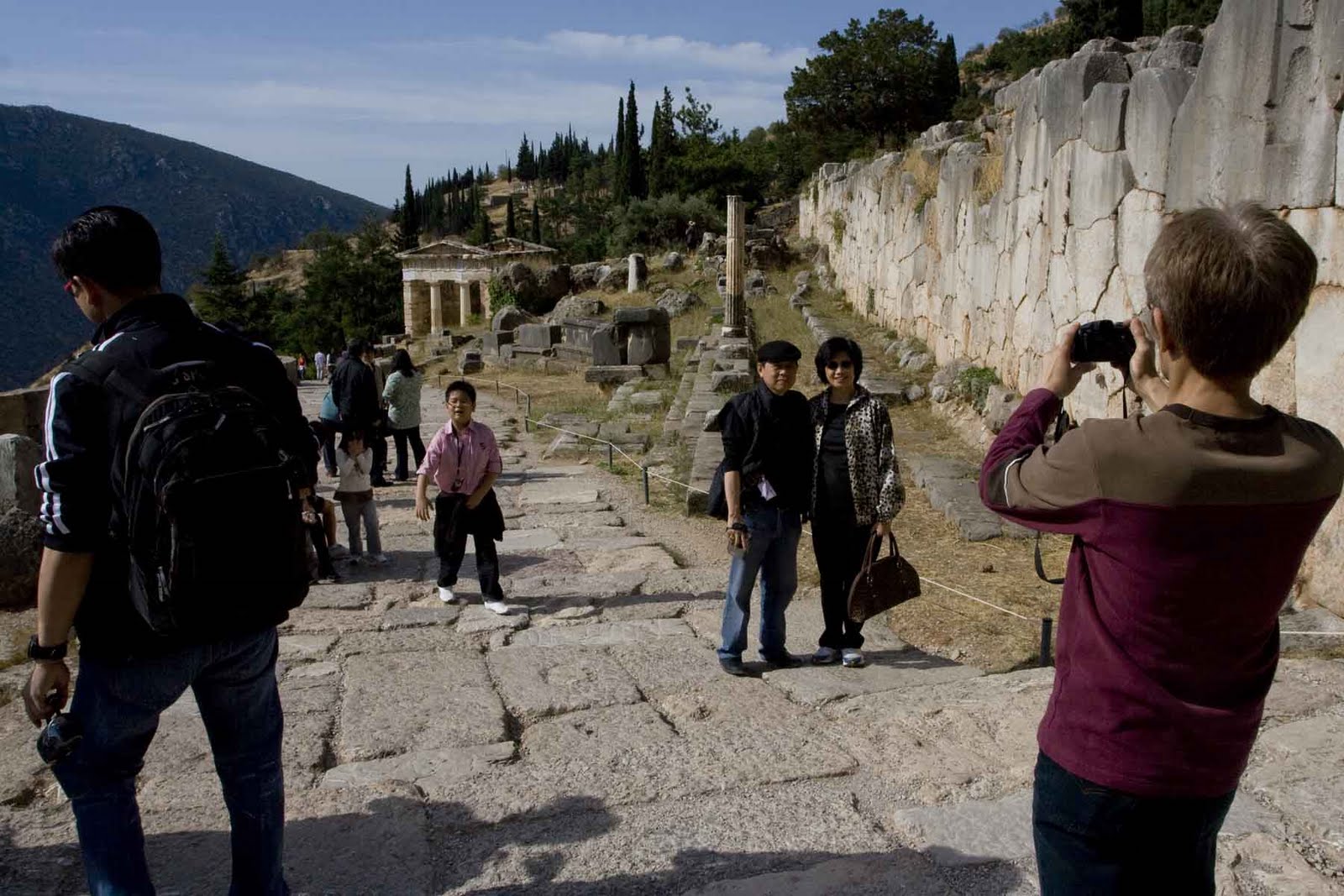 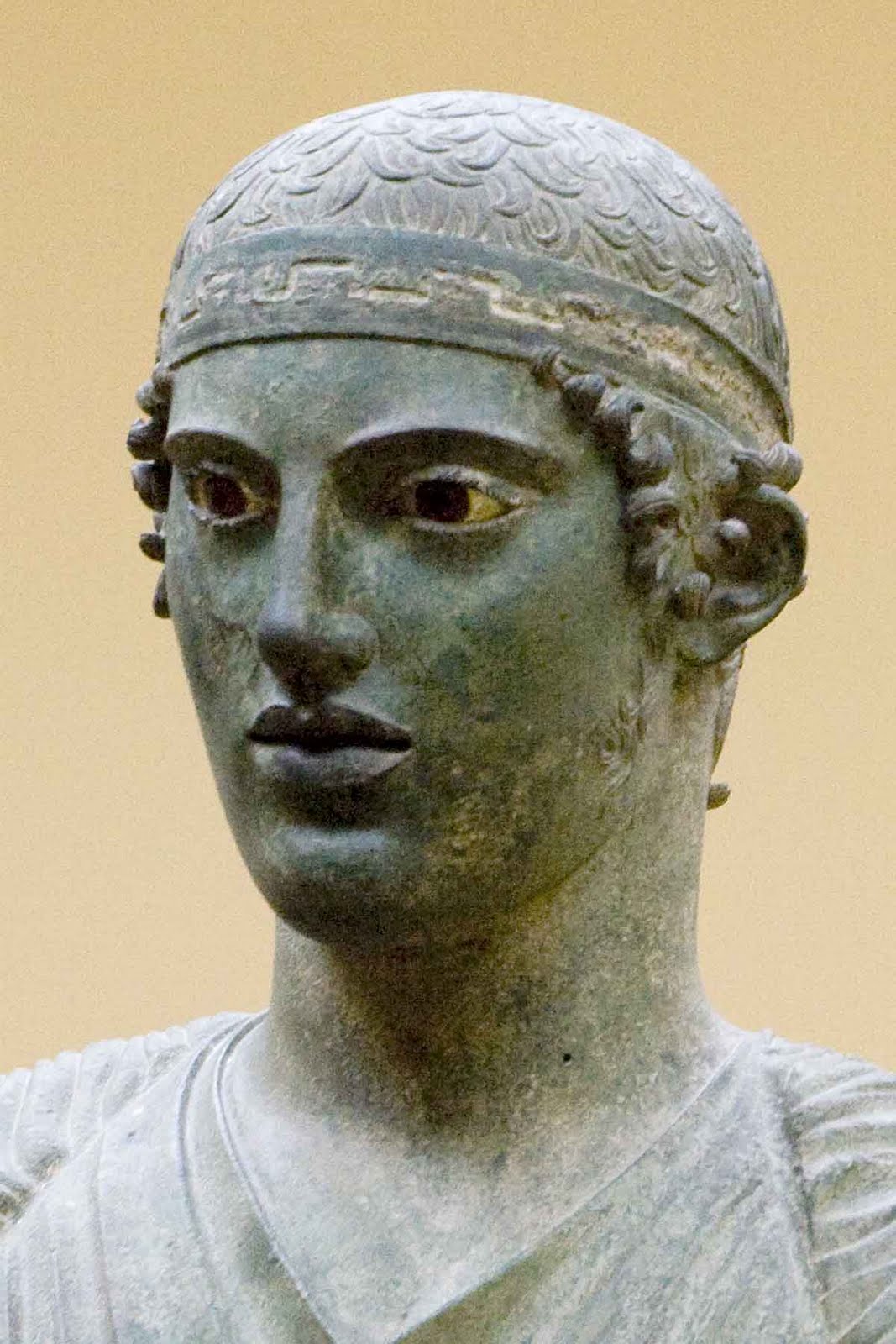 Close up of Charioteer of Delphi 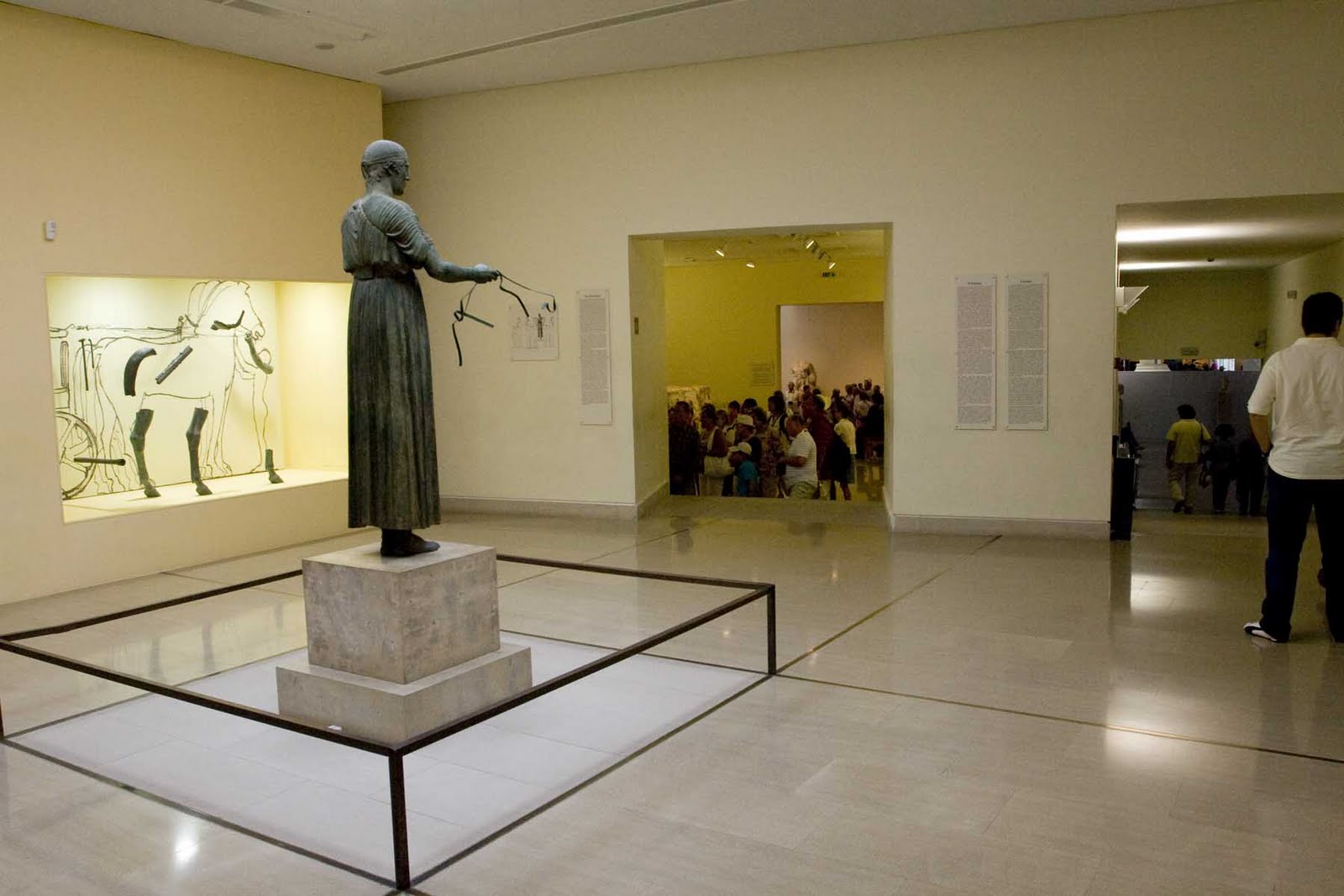 And wideshot
Headed off late morning on our lengthy trip to Meteora. We strayed from our usual family taverna option for lunch and had to make do with a meal at a gigantic tourist service stop on the motorway. It was set in a huge car park and it was geared entirely to tour buses. There was seating for 800 people (John counted!) and loads of toilets (cleaned every half hour). But, surprisingly, they still served decent moussaka, baked eggplant and salad. 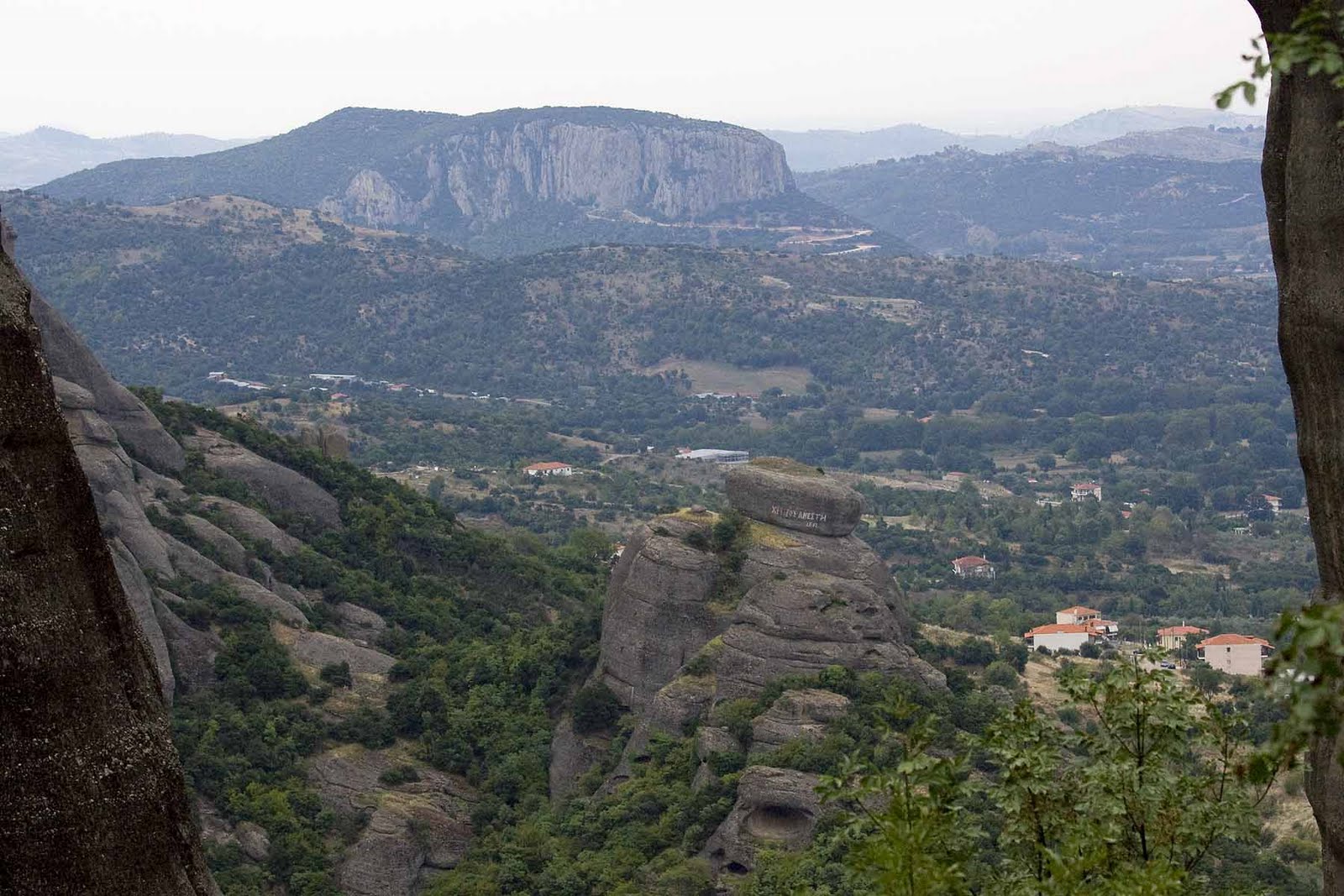 Ahhh….Meteora
Found our lovely Hotel Adrachti, without too much mishap, in the lovely village of Kastraki (just a little further on from Kalambaka or Kalapaka – which was on a different sign right next to the first one!). The only breath-holding moment was negotiating the driveway! The hotel is nestled right up against the magnificent rocks of Meteora. In fact, sitting on our balcony having an afternoon drink looking at the looming walls of stone, they are really just in our backyard. 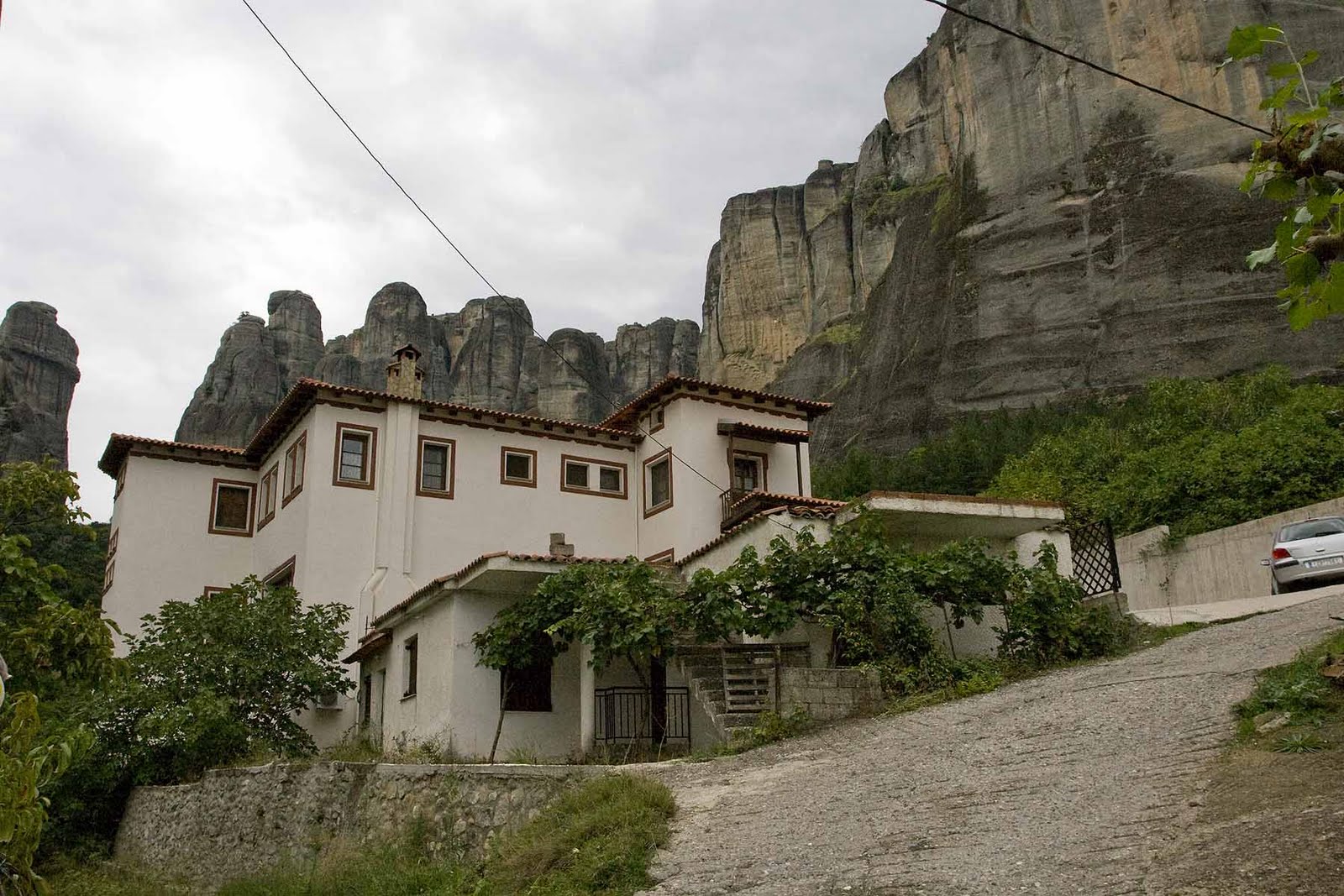 One Reply to “Delphi”