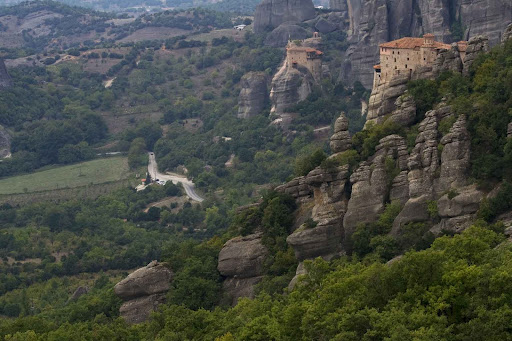 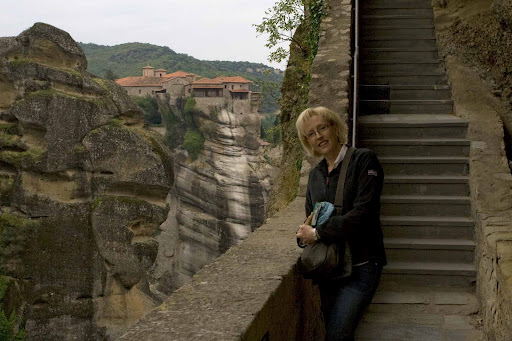 Nic on Megalo Meteora with Varlaam in the distance 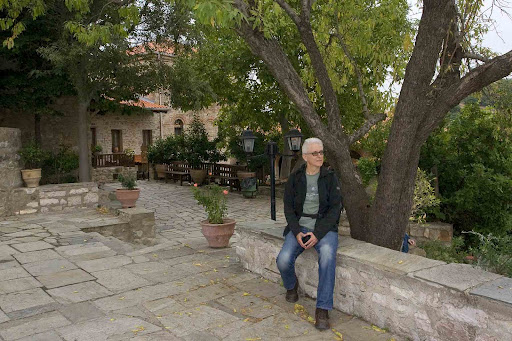 There were once 24 monasteries on the tops of these towers of rock. The first monks were hermits who lived in the caves on the sides of the monoliths and they eventually decided it was worth setting up permanent residency. There are only 6 remaining (5 inhabited by monks and nuns – not in the same venue, of course!) and they are truly amazing engineering feats to behold. These days they have some bridges and decent stairways to ascend these towers. Once you had to climb a ladder or be winched up in a basket. No thank you! We only managed the up and down climb for 5 out of the 6 before we called it quits to have some lunch. The old knees had had enough. The favourite of the day for both of us was the small Agios Stefanos (St Stephens) which is now a convent housing some very industrious nuns who maintain pretty impressive, immaculate and beautiful gardens. There were the most impressive frescoes in the churches – new ones, or restored ones, not sure which …they were painting onto plain white walls while we were there. Such vibrant reds and golds – beautiful! Without the tourists it would be a very peaceful place, indeed (not us, all the OTHER tourists!). 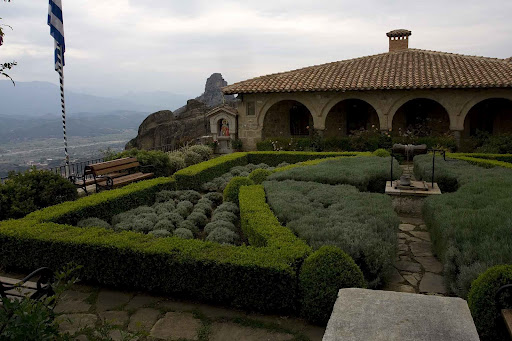 Agios Stefanos, the home of the convent 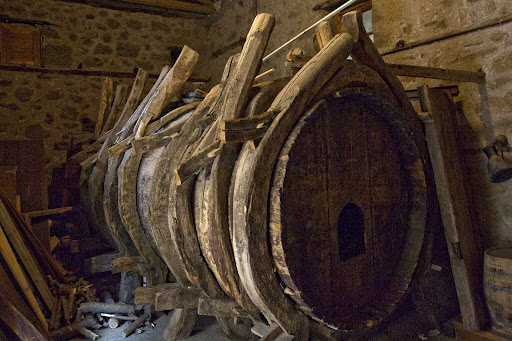 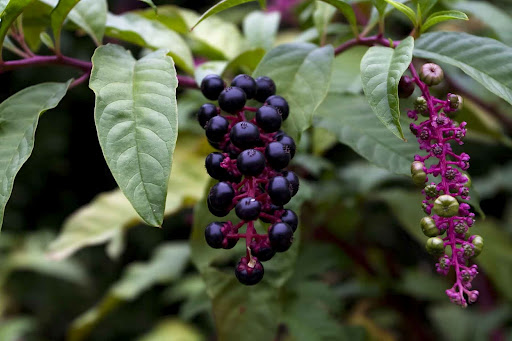 Unknown berries, whose colours match the branches they grow on 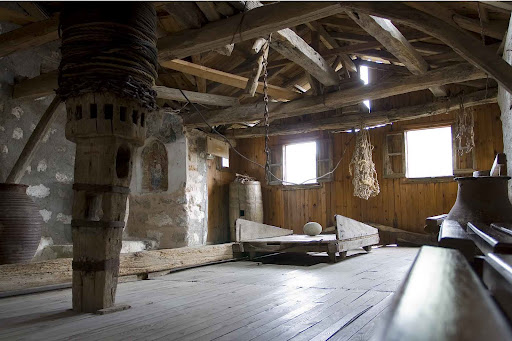 The old winch room in Agios Triada
While on the monastery trail a couple of times we encountered a busload of gorgeous Russian tourists. They were very into taking over the photo ops as they arose (much like all tour bus inhabitants!), only they were very distinct in their aims. Each time there was a viewing point, they would clamber over the rocks and take their time with their MANY practiced poses (practiced in front of a mirror as though posing for Vogue…or maybe Hustler? No, they were clothed!) Sultry, sprawling on boulders with a pout wore a bit thin when they were hogging the space and pushing aside the mothers and their children waiting to take their holiday snaps. Without exception, each woman wore high heeled wedges or strappy sandles and matching bulging cleavage. Da, baby!

Nic on top of the world 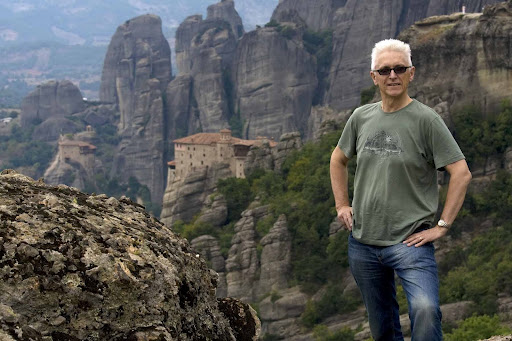 The overcast day meant that there weren’t the perfect conditions for great photos, but John made do (as he does!). The overall experience of these monasteries and the stone giants hovering over the valleys was so overwhelming. One could never tire of this view. 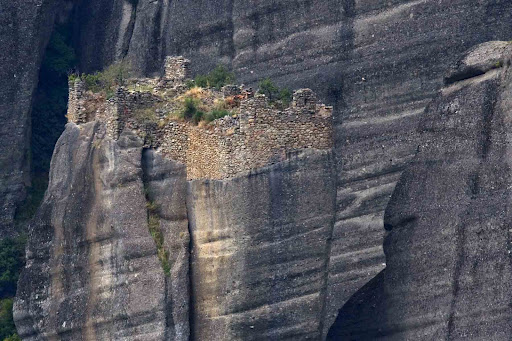 Abandoned fortress remains overlooked by the hundreds of tourists every day 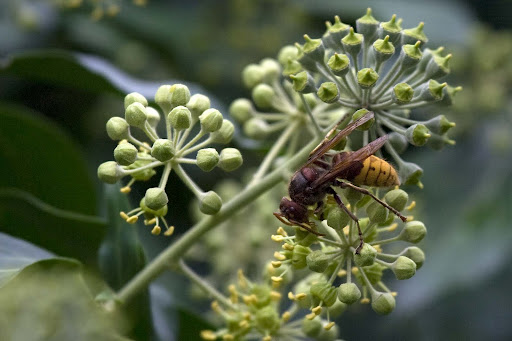 We had a relaxed evening of blogging and working on photos (and actually watching the tele!) before a good night’s sleep in preparation for our long drive south to Piraeus. After check in we meandered to Marina Zeas (away from the ferry terminals) for a delicious waterside lunch gazing at the yachts of millionaires. Comfy room, air conditioning, satellite TV, internet, good bed and pillows, what more would we need for a good rest before our early ferry? Chocolate! So off we went in search, but found nought – all closed as it’s Sunday, and we weren’t heading back to Marina Zeas for waffles! Packet of oregano flavoured chips and a Heineken between us had to do. 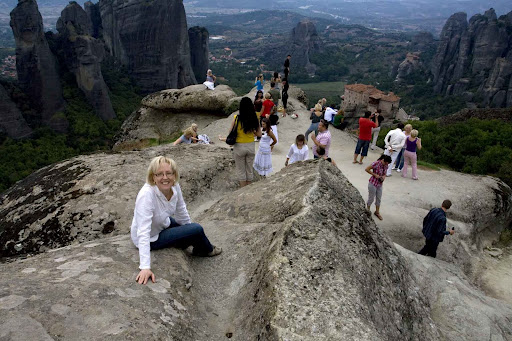 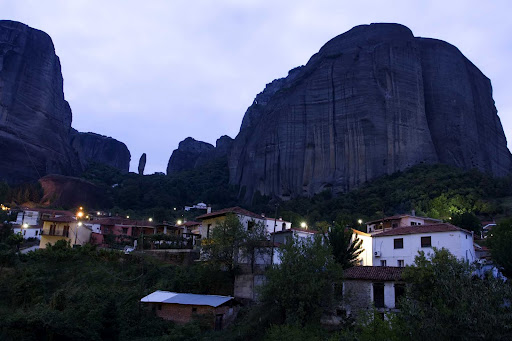 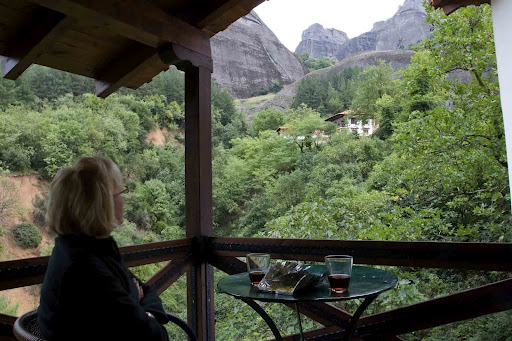 The view from our balcony, not bad, huh?

One Reply to “Meteora & Kastraki”