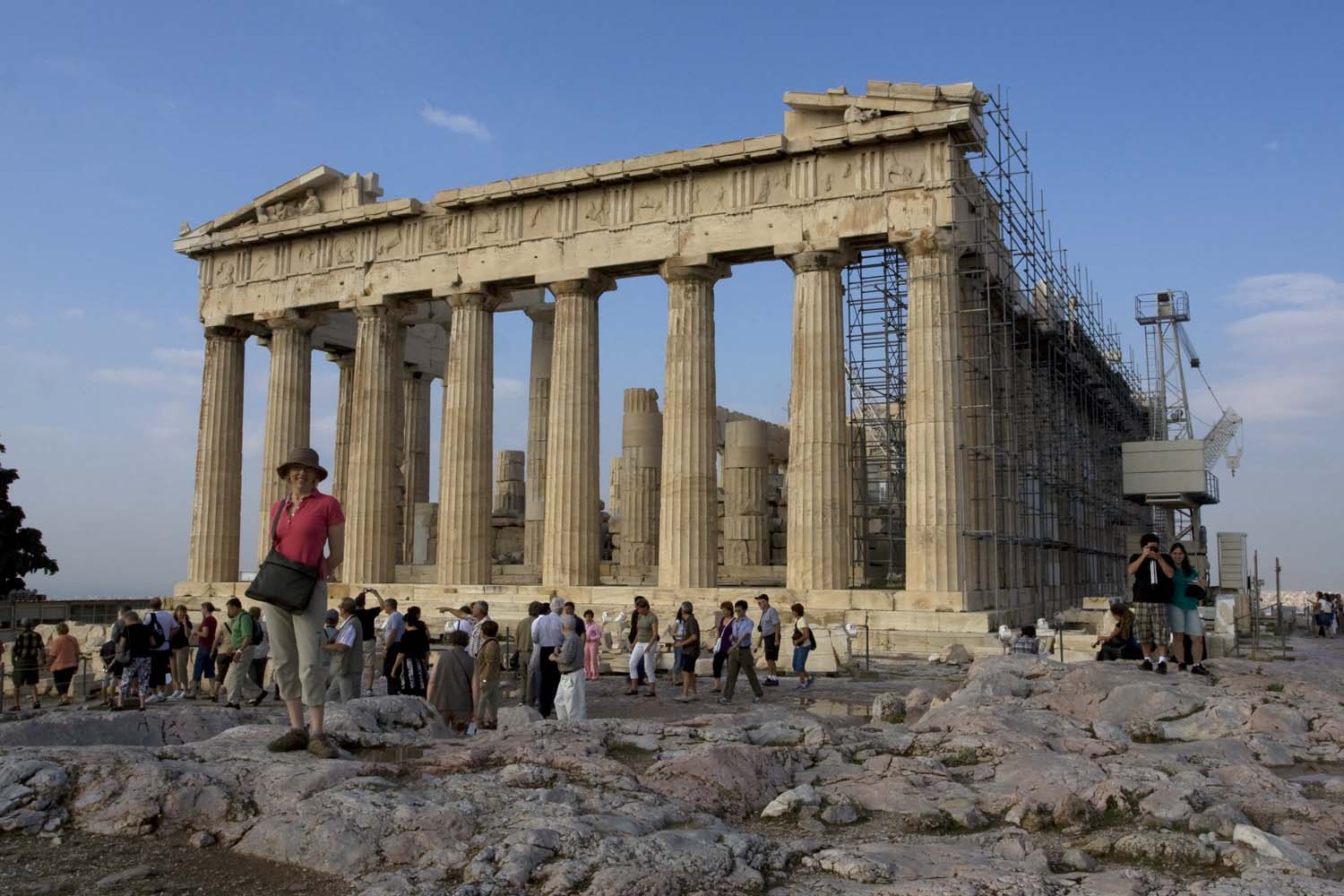 Much better breakfast this morning! Good coffee for John, great hot chocolate for Nic and fabulous vegetarian omelettes for both. Things began well and continued strong all day. This was a very special day for both of us because we visited the Acropolis! After savouring our breakfast we walked to the gate by 8:30am and followed a tour group up the hill, glad that things weren’t TOO busy. By the time we left the entire rock was teaming with bodies, which from the choice position on Mars Hill, looked like ants swarming over a picnic. 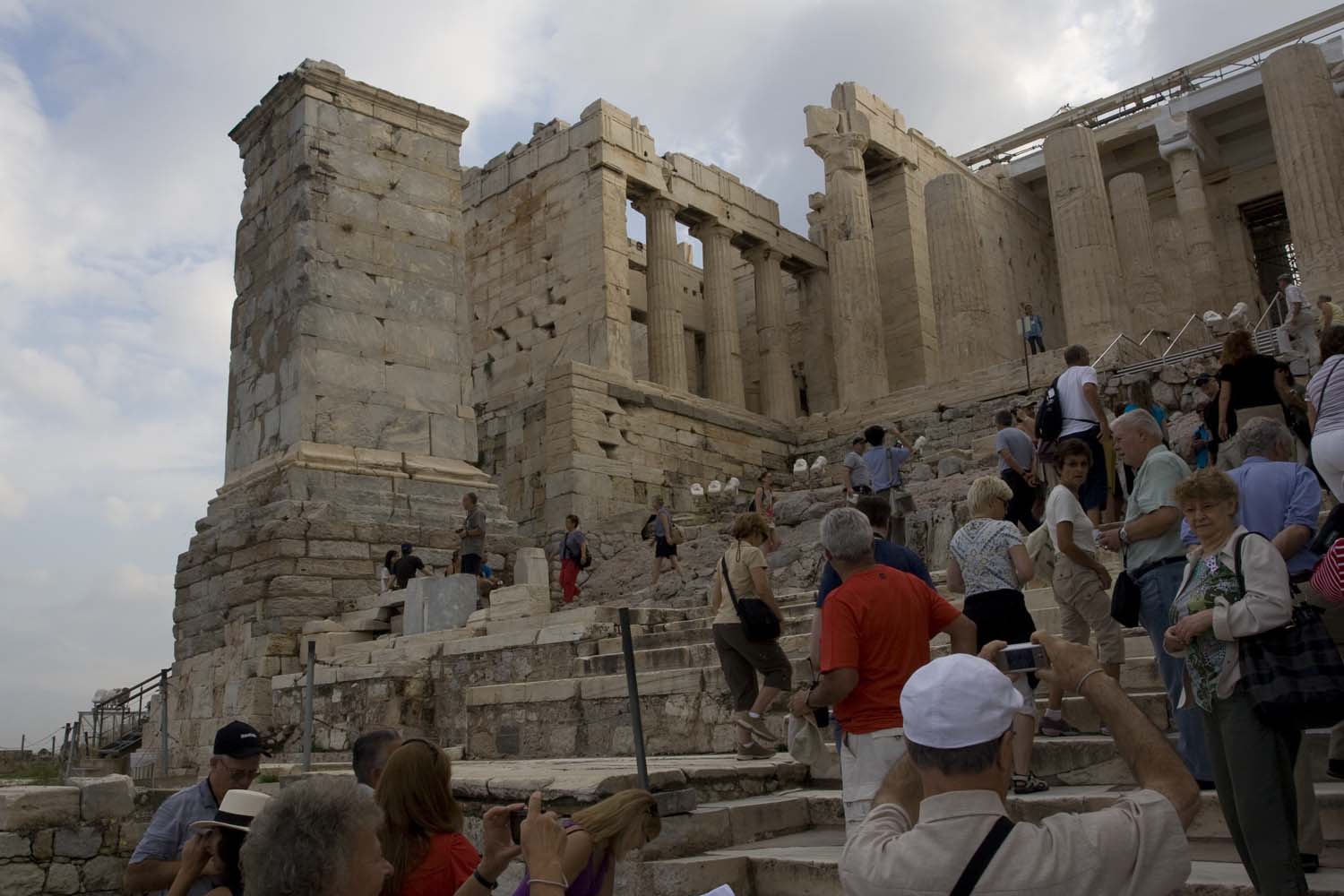 The Propylaia, entrance to the “high city”

Mars Hill from the Propylaia 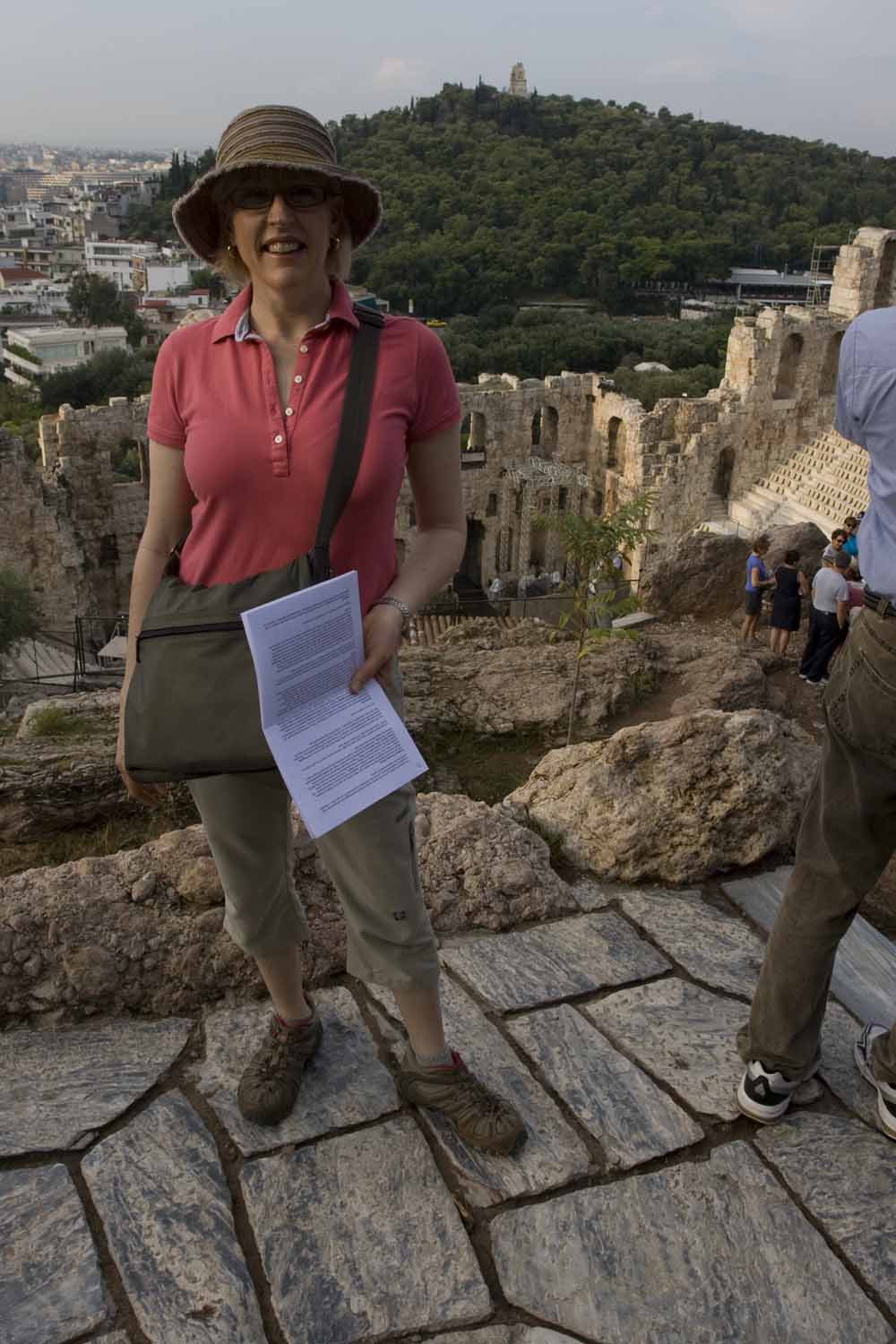 But, yes, the Acropolis….the scale of everything on this ‘High City’ was humungous! The propylaia (entrance hall) with its temple of Athena on one side and gigantic plinth (minus it’s statue) on the other ,was an excellent way to prepare us for what lay ahead. We climbed those stairs ‘oohing’ and ‘ahhing’, the perfect appetite whetter for the phenomenal Parthenon. According to one guidebook, this is “surely the most important ancient sight in the western world.” The follow up trip to the New Acropolis Museum was a great reinforcement of the wonder and grandeur of the Parthenon. – it is the same scale and aspect of the original. Details of statuary that used to live in the east and west facing friezes of the Parthenon were extraordinary. The whole restoration and reconstruction process is going to take decades.

John as tourist above Theatre

We tried to get tickets to an outdoor concert at the Theatre of Herodes Atticus (big time wealthy guy who was into throwing his money into public works – go him! Where are those types today?). Unfortunately the 5,000 seat theatre was sold out, but doesn’t really matter, as it looked like rain. Maybe next time we visit! 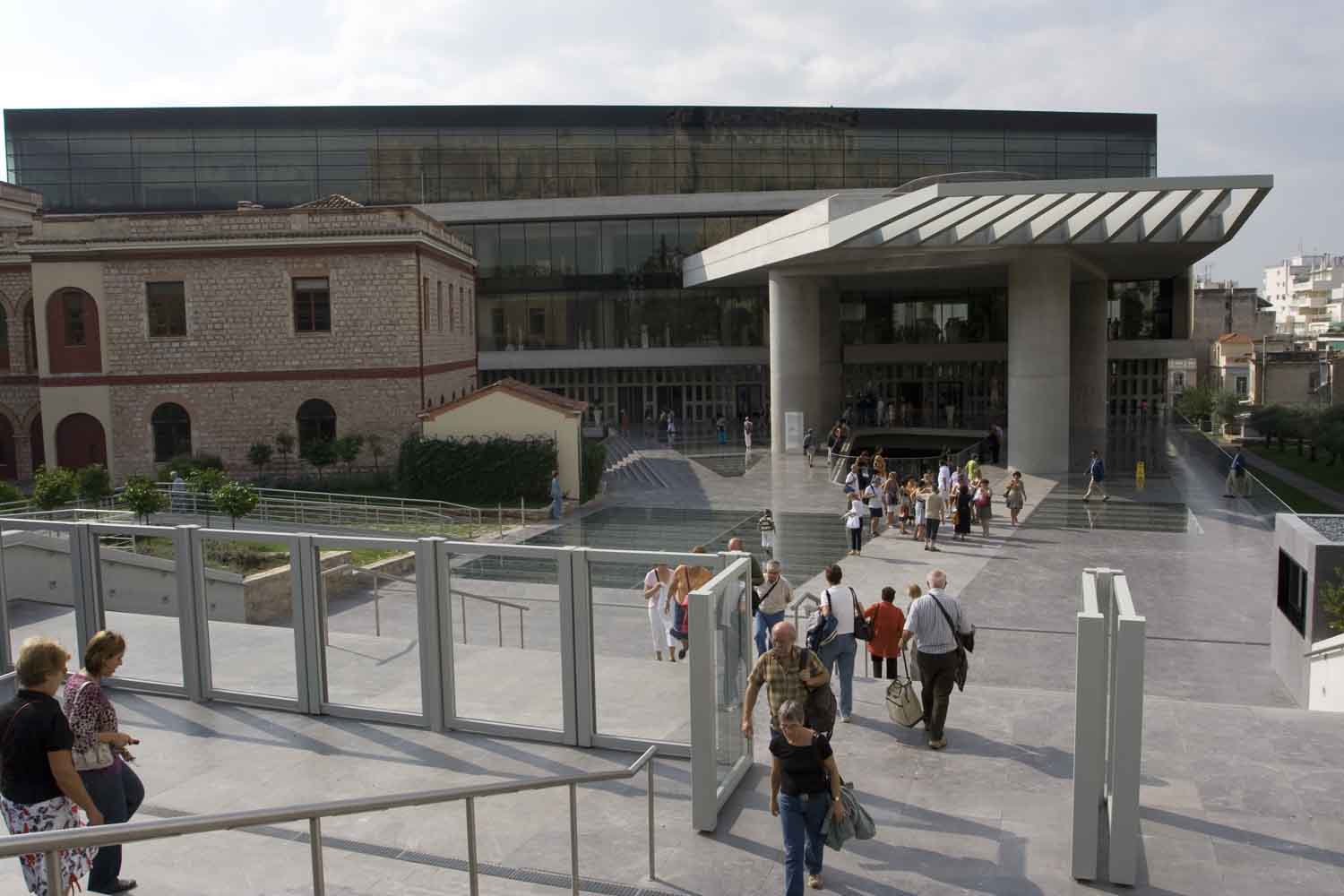 Detail of frieze on Parthenon

After lunch at Taverna tuo Psara in the Plaka (grilled salmon, veges, Greek salad) and a 20 minute kip, we toddled off to Hadrian’s Arch and the Temple of Olympian Zeus (both just down the street from our hotel). The temple was once even bigger than the Parthenon (again thanks to Herodes Atticus). The small number of remaining columns with their lovely detailed capitals are still incredibly impressive in their scale and beauty. 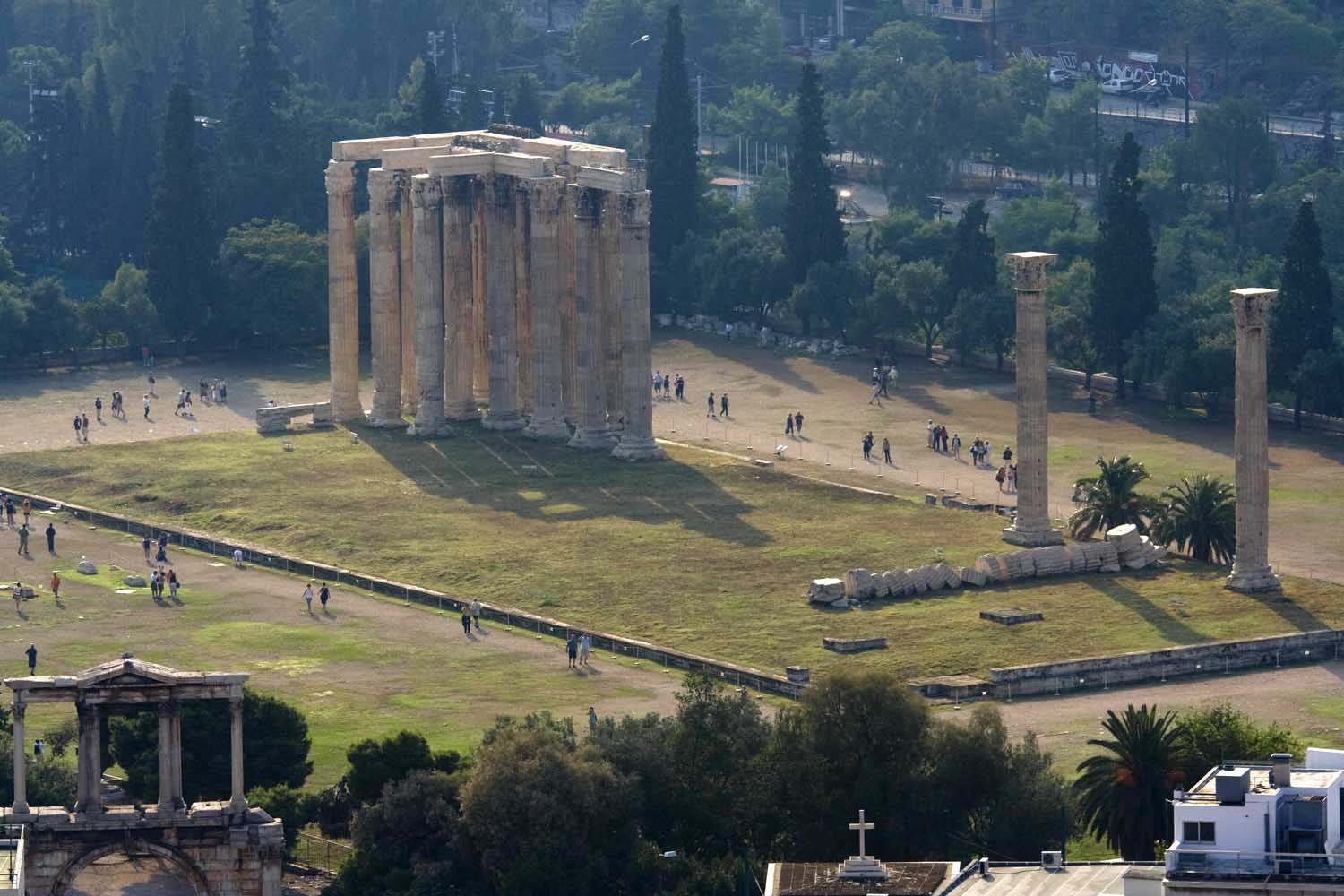 View of Temple of Olympian Zeus from Acropolis 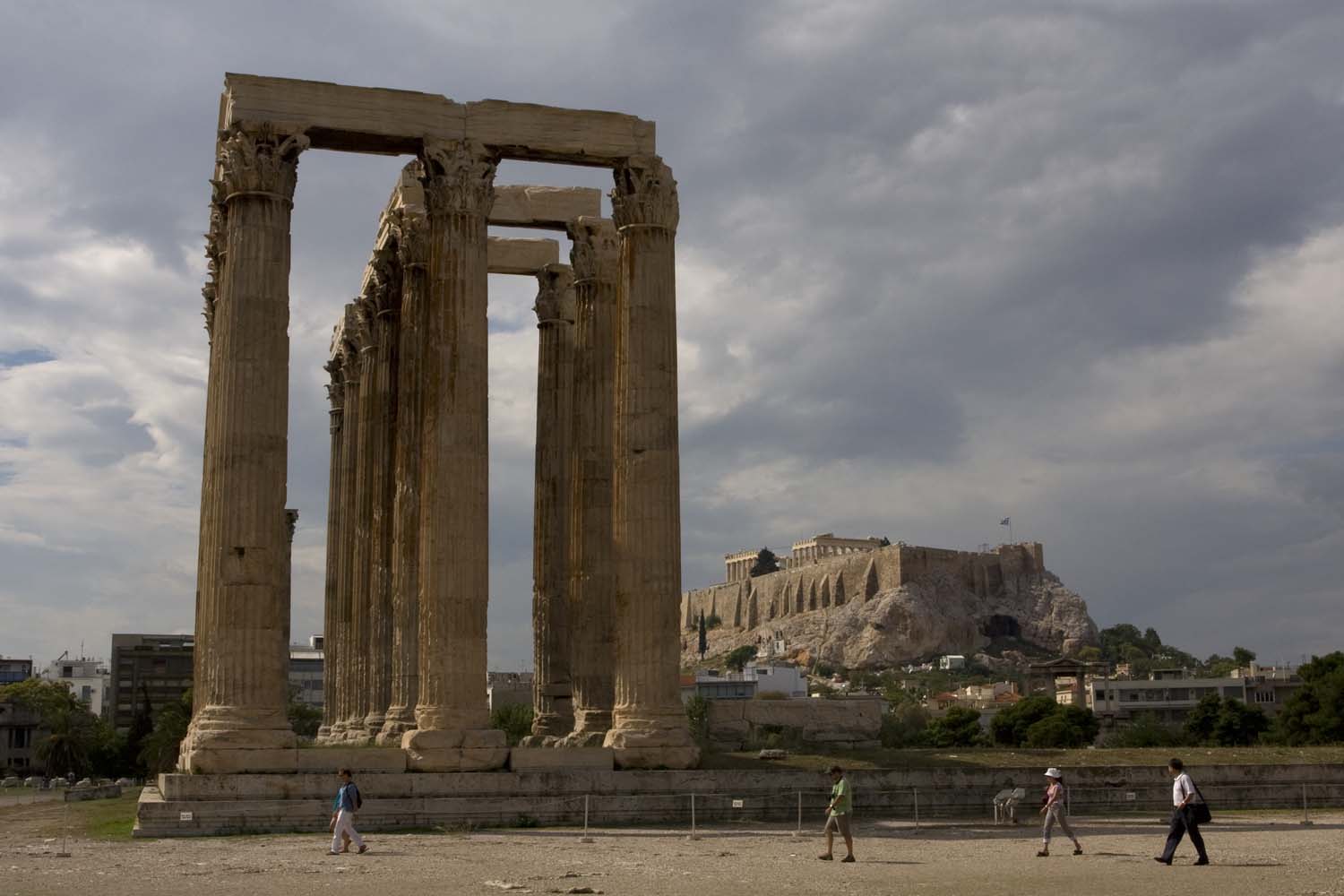 Temple of Olympian Zeus lookng back up at the Acropolis

After our Zeus temple we strolled through the National Gardens, planted in the 1800’s by Queen Amalia (or…planted by her blokes who did garden stuff – surely she stayed indoors and bossed everyone around). Nic was very taken with the pond full of tortoises, all engaged in a choice of activities: 1. swimming and floating lazily, 2. scrapping underwater with each other, 3. forming tortoise sculptures by balancing on the top of the shell of an immobile other, 4. forming tortoise sculptures by remaining still as a rock while another clambered and balanced on top, 5. remaining poised and balanced, precariously or no, all on one’s own. Some brats took delight in tormenting, by yelling, and lifting out of the water, being feebly berated by a bored grandmother minding them.

Moving on we found ourselves on the street and were nearly run down by three deliberately marching pom-pom soldiers proceeding down the footpath in single file with noisy hobnail shoes with an accompanying soldier in modern uniform…to make sure they kept up their ballet steps. It was hard to take them seriously with their fluffy skirts and big pom-pom shoes…although they DID have big guns! They would’ve done pilates and tai chi proud. They were on their way round the corner to the tomb of the unknown soldier, where they changed guard, to the delight of 5 busloads of tourists (and John!) wielding cameras. 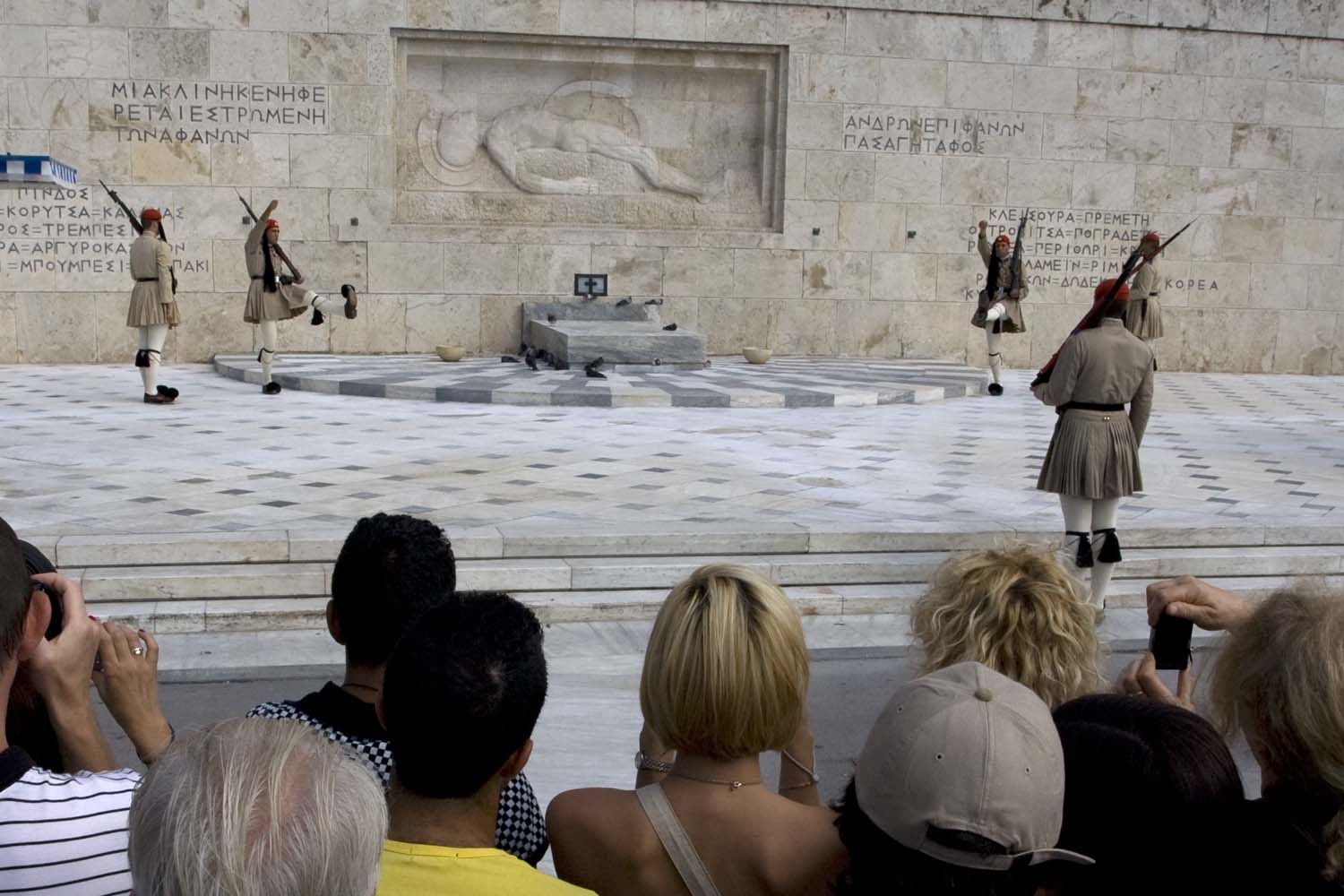 Toyed with idea of splurging and having wine on the rooftop garden of the Hotel Grande Bretagne, but Nic had ‘hat hair’ and was wearing sturdy walking shoes, so didn’t feel all white lineny fresh enough to make an appearance there. Instead we chose an ordinary bistro/café place on the Cathedral Square where we walked on our first orientation stroll, and were highly entertained by the manager – a smooth, short, mature Greek man whose voice has been ravaged by a thousand or so too many cigarettes. He farewelled every woman who had visited the establishment with a kiss on the hand, or a peck on both cheeks, or big demonstrative hugs. We, of course, joined suit and did some pecking and hugging ourselves…both of us! We didn’t realise till we were leaving that he didn’t charge us for the ½ L of wine. And to think we nearly didn’t go in there because it looked too ‘touristy’ – it was the best house wine we have had so far. 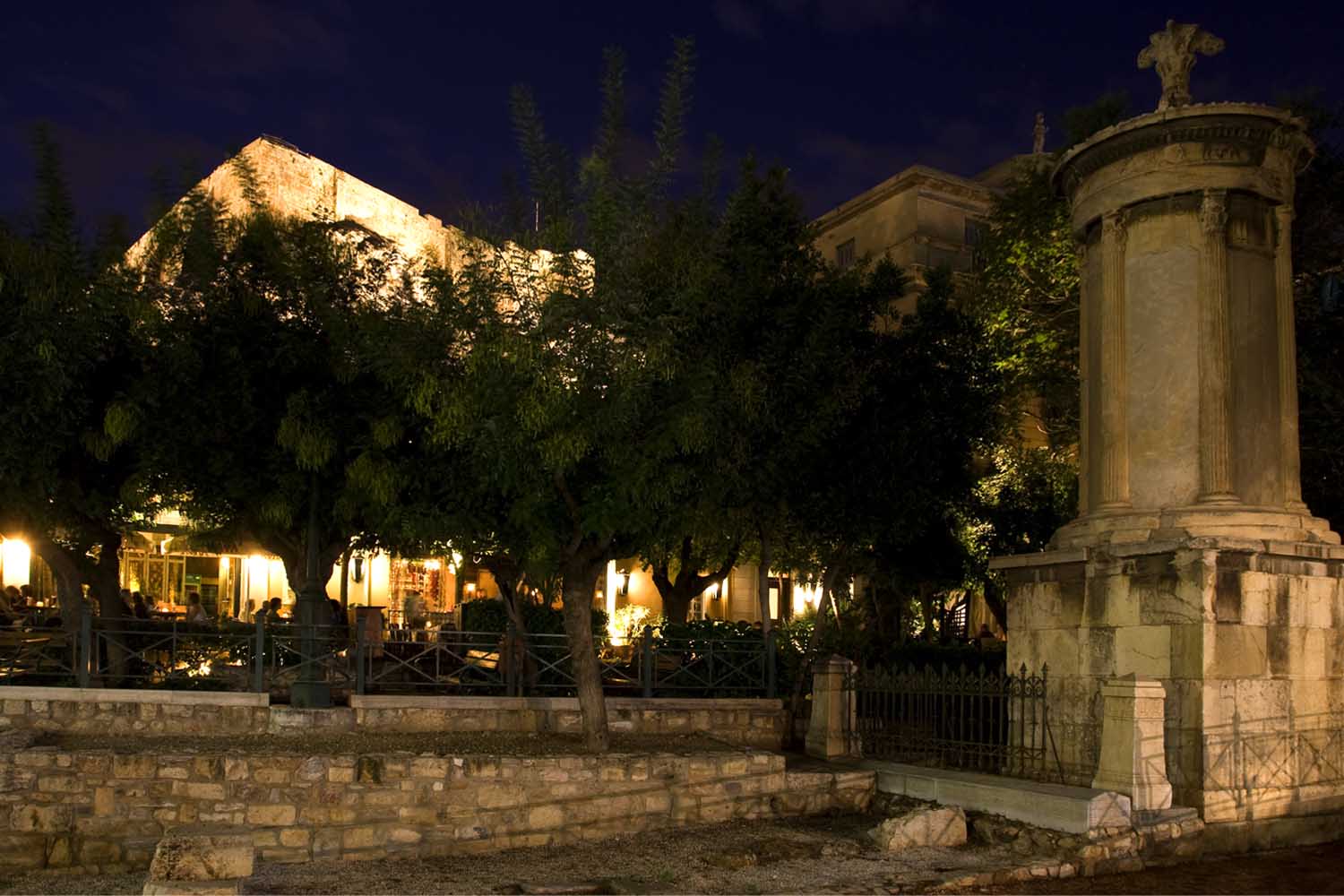 Square near our hotel in the Plaka

Restaurants near our hotel

Spent our final night in Athens (before our road trip of the mainland) wandering through the jumping streets of the Plaka on a Saturday night, discovering many more wonderful eateries and shops that we will try to sample on our one and half days back here before flying home. We are such an old couple when we stroll through these streets thinking about bedtime while many people are just placing their meal orders at restaurants! Tragic! 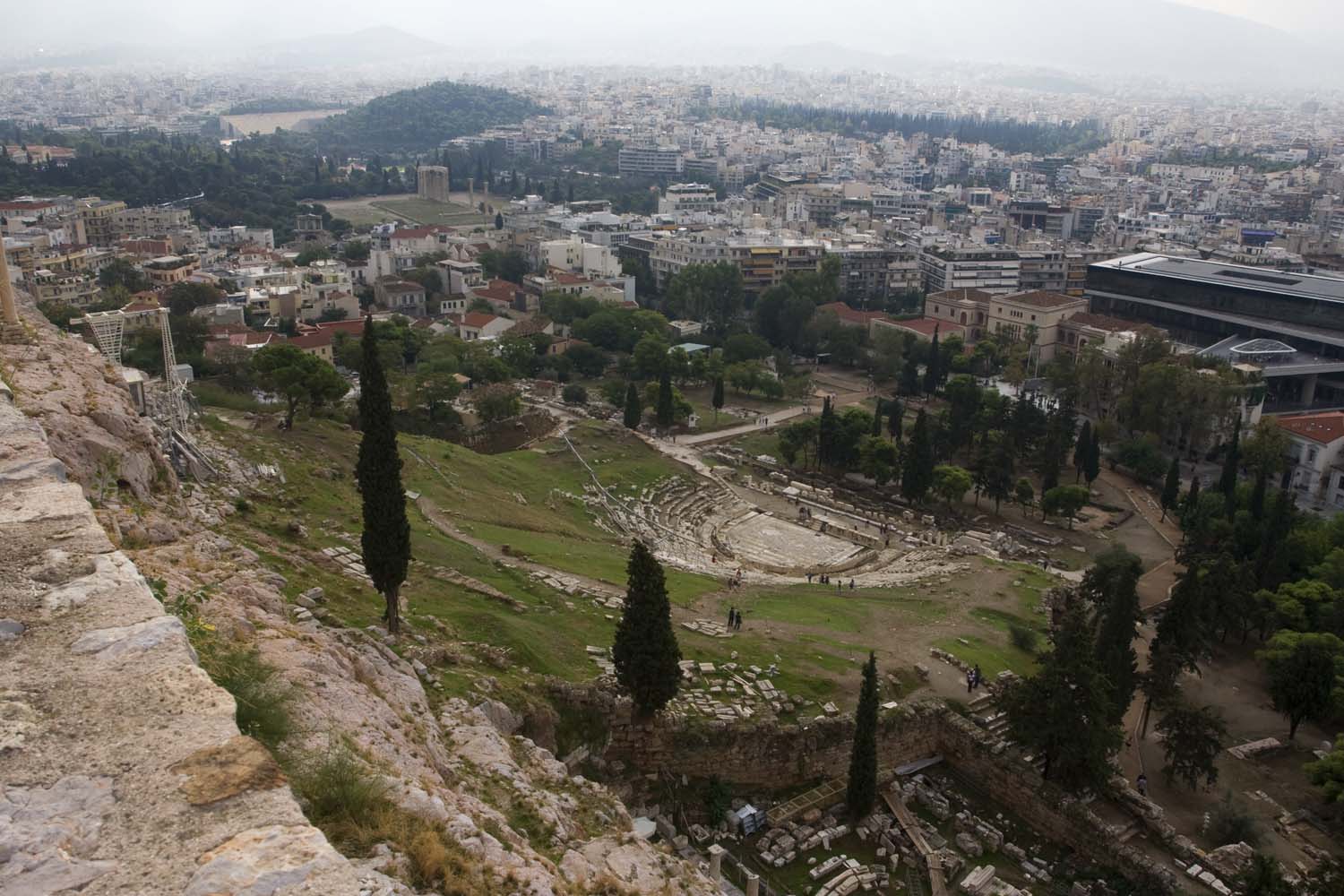 Theatre of Dionysus from the Acropolis