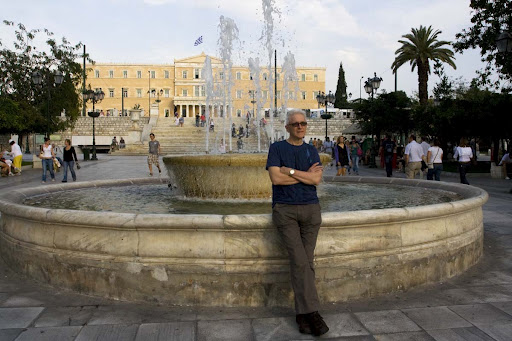 John at Syntagma Square
Arrived in Athens in the late afternoon and spent time just having a wander and enjoying the bustle of people and the lovely marble paved streets of the Plaka (which can be a tad slippery when wet!). We found a lovely taverna called ‘Hermion’ where we had an early dinner (late for us, early for the Greeks…or any Europeans, really!). The restaurant was hidden down a side street in a very busy part of Monastiraki and was a delightful vine covered terrace with yummy food and eager service (and surprisingly good bread….and great BBQ calamari….and scrummy fried zucchini balls). After travelling for 32 hours total and then wandering around the city for a few more to orient ourselves, our full bellies, wine-tickled brains and shaky legs declared it a night, and we were both asleep by 9pm. 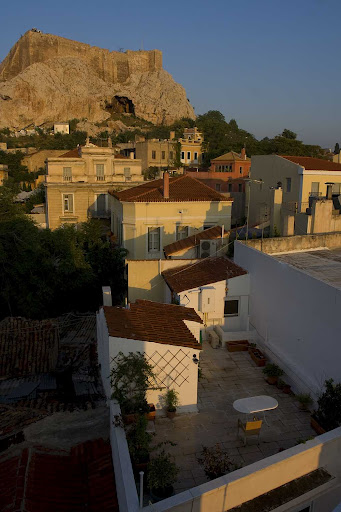 Our accommodation is pretty basic, but we have a clean room, comfortable bed, hot water in the shower and a view of the Acropolis from both our own private little balcony and the roof top terrace. Would highly recommend Hotel Phaedra. The location is the real winner. We have walked to every sight worth seeing.

The view from our balcony

We crammed in quite a lot of adventure today. Started early, thanks to a full 9 hours sleep, and headed out for breakfast. The choice of café for breakky was the first of many ‘odd’ decisions we made today. We asked for the ‘vegetarian toast’, having been told it had tomato, mushroom and capsicum on it. What we weren’t told is that it would also have hot chips squashed in the toasted sandwich, and a sprinkling of potato crisps on the top (??!!). Hmmmm. Odd. 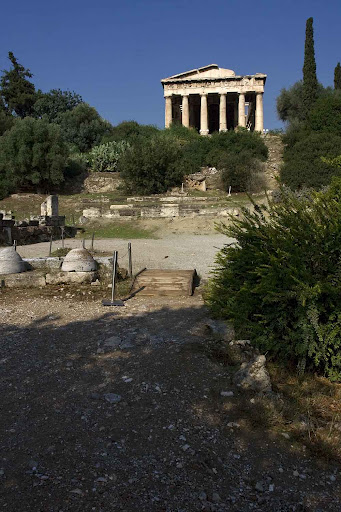 We then walked to the Ancient Agora where we had a lovely time imagining ourselves chatting with Socrates as he held forth, leaning against the columns of the Stoa of Attalos (where the columns were smooth to the height of 6 feet, to make casual leaning more comfortable!). From there we checked out Hadrian’s Library, the Tower of the Winds, the Roman Forum and some lovely old Byzantine churches. One of the highlights of the morning for Nic was the discovery of the tortoises living at most of the ancient sights in Athens. They are determined, not at all slow, and even a little bit tame as they appeared to look for food in the lens when John’s camera came close. 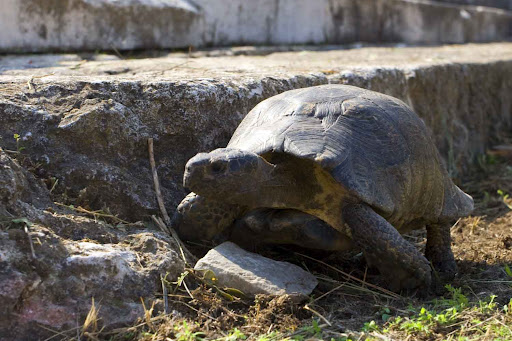 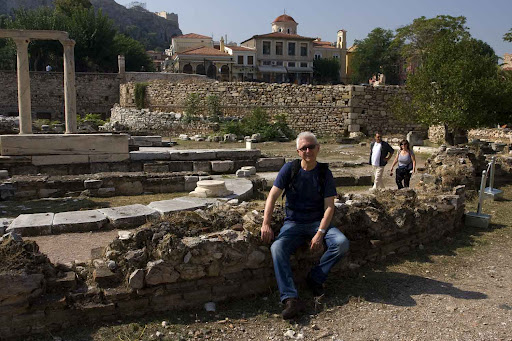 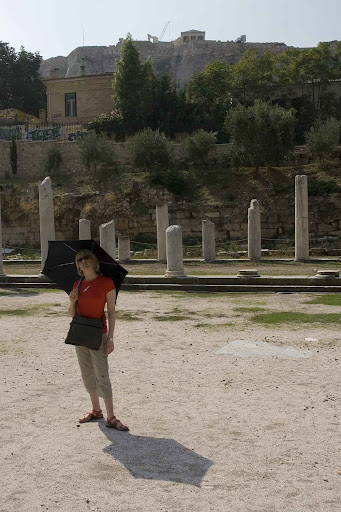 Lunch was had at a family owned/run ouzeri called ‘Scholarhio’. They had a great deal for €14 per person where they brought out a huge tray of dishes and (with 2 of us dining) we had to choose 5 dishes to feast on (it also included bread, 1.5L water and 500ml of house wine). We had stuffed tomatoes, traditional Greek salad, grilled eggplant, mashed fava beans and pork in a tomato, chilli sauce. Oh, they also included a sweet, syrupy cake for dessert.

Yes, that is a random picture of a young Jason Donovan in a second hand book shop 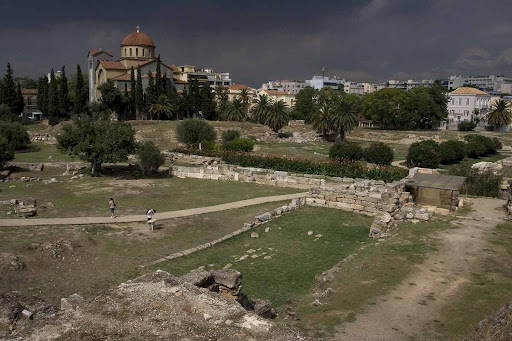 After gorging ourselves silly, we really should’ve gone for a good lie down. But no, we made more silly decisions, like going out with only one umbrella to an old cemetery, quite a distance from the hotel, when it looked like rain. And rain it did! We didn’t even get to the cemetery….just across the road from it! The heavens opened and we were stuck trying to get back to our hotel in bursts of “stuff it, let’s get wet” and “bugger it, let’s wait it out under this pathetic awning”. After quite a while of see-sawing, we decided to just take the rain and go. This was hysterical. We almost swam back to the hotel as most of the Plaka had become alleys of rivers. Shoes and pants legs were completely sodden and we were both so very over it. About 5 minutes from the hotel, the rain stopped completely and the sun came out with a vengeance. 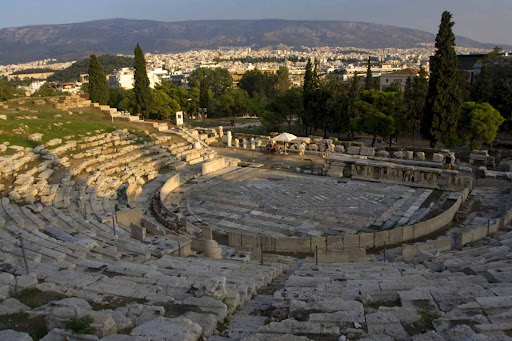 We had a little power nap after drying off and then headed to the Acropolis where the plan was to take some great photos as the sun began to set (tourist info place said it closed at 8pm). When we got to the gate, we discovered it actually closes as 7pm and there wouldn’t be enough time to do it justice. Instead we went to the Theatre of Dionysus (which sits on one side of the hill of the Acropolis) and watched the light start to fade from the seats where once Athenians watched the world premieres of the plays of Sophocles, Euripedes and et al. 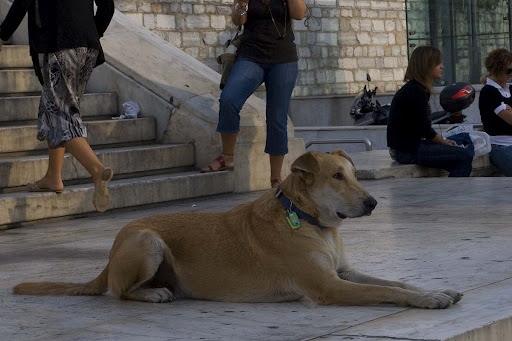 Oh, yes, the dogs! It seems like the city actually owns all these dogs around the place – they look like strays, but they all have collars and tags. Very friendly pooches with great self-esteem and confidence! 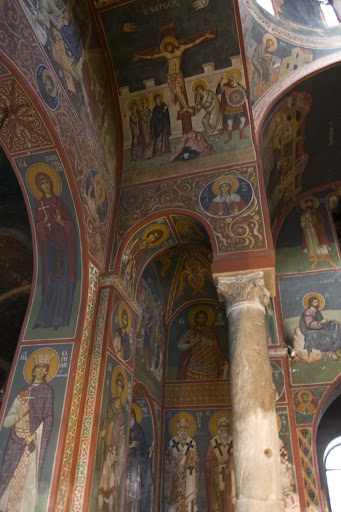 We are now on the roof top terrace sipping wine, blogging and taking long exposure photos of the Acropolis as the lights come on and the sky fades to black. No dinner necessary (a good decision!), but maybe a stroll with some ice cream is in order.

Acropolis at dusk (from our rooftop….while sipping wine), and…. 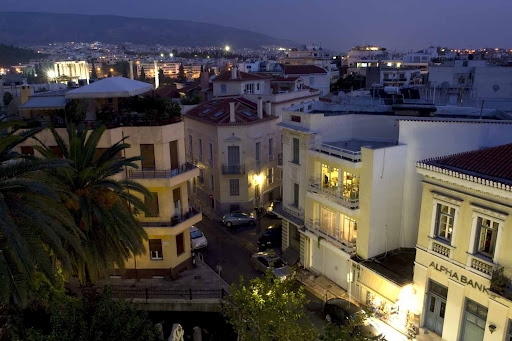 Athens from our rooftop

3 Replies to “Our first taste of Athens…and what a mouthful it was!”