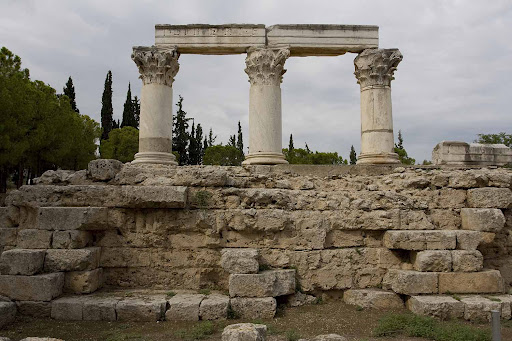 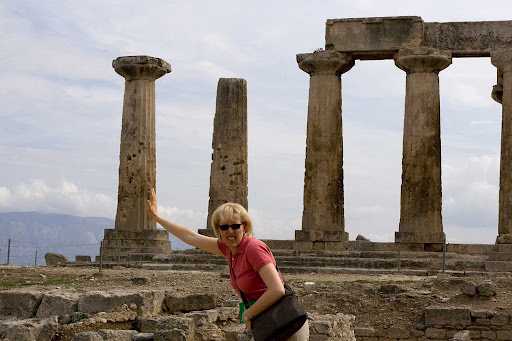 Nic being a dag…but a STRONG dag! 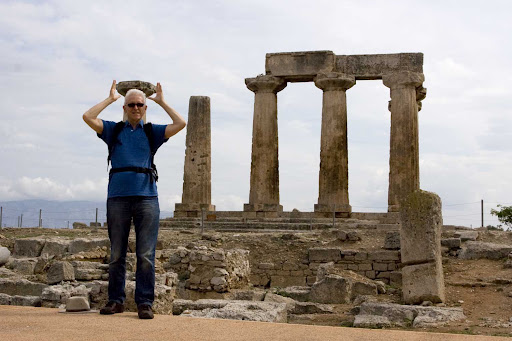 John being a ‘king’ dag!
John took the wheel as we left Athens early on a Sunday morning – both grateful it was Sunday with less traffic. Only received one blast of horn and stream of expletives, so not bad really. Had a smooth drive down to Ancient Corinth (although “Jane”, our GPS, was a little confused – she knew where Corinth was, but not the ruins – we had to resort to reading signs! Ye gods!!) 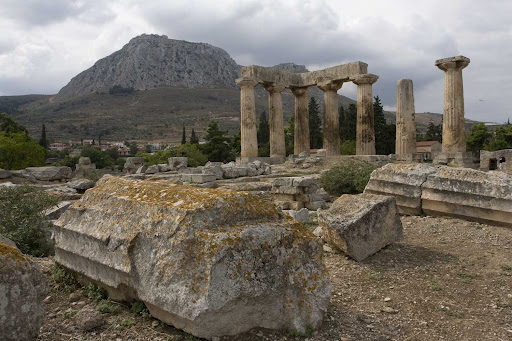 Corinth
The archaeological site at Corinth was quite interesting. It never ceases to amaze that any of these ruins still exist, let alone mighty big columns that are all that’s left of beautiful temples. The apostle, Paul, hung out here a bit – started a church in his spare time. It’s all so very impressive, especially the plumbing. 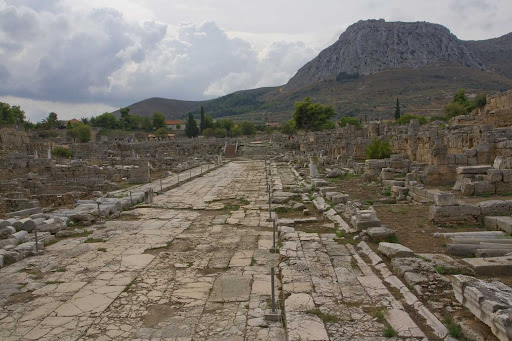 Main processional street of Corinth
From there we drove to Mycenae, more ruins. Have a feeling that by the end of the trip, it’s going to be a lot like the church overload when travelling through Italy – “not ANOTHER ancient ruin!” But at the moment we are both still strolling, mouths agape at the sheer AGE of everything. I mean, this place is REALLY old – pre-Greece, pre-everything, almost. Bloody old. We didn’t dawdle there as once again, storm clouds gathered, and we learnt our lesson the first time! 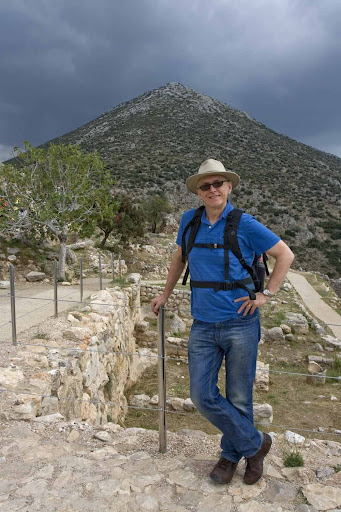 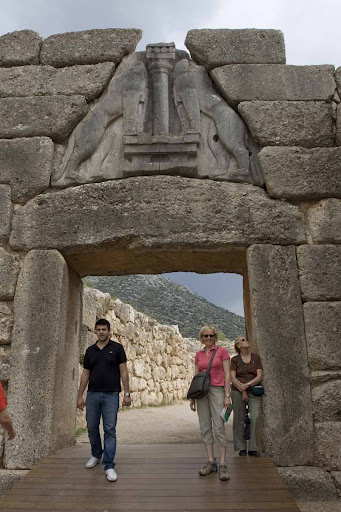 Nic and John at Mycenae
Drove on to the old capital of Greece, Nafplio. What a beautiful old city. To be honest, we didn’t go near the newer parts, we didn’t have the time or the inclination, but we adored the old town (but really, what ‘old town’ in any European city isn’t gorgeous?) For us it was a lovely combination of Cassis in the south of France and Taormina in Sicily, including the lovely old narrow streets lined with shops and tavernas (streets the perfect width to walk down, but a nightmare to drive through – unless you have one of those tiny, tiny cars, which we don’t!). 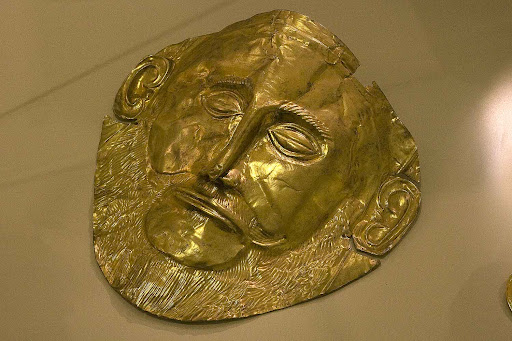 Mask of Agamemnon
This stop was a first for Nic – arriving at a holiday destination with NO RESERVATION!! Talk about landing on our feet! While a bit of research had been down before hand, we checked 3 different establishments (whose rooms we weren’t that impressed with) before finding what was actually our first choice, but which we thought was going to be out of our price range. It ended up being cheaper than the others we looked at, but was simply lovely. It was the top floor of a 160 year old house (had been in the manager’s family for 110 years, her and her mother had been born there) and the room had 3 different aspects and a wrap around balcony where our breakfast was waiting for us the next morning (served via another entrance). It was immaculate in décor and cleanliness and the owner/manager was grace itself – softly spoken, kind and helpful – the perfect host. It was called the Aetoma Hotel. 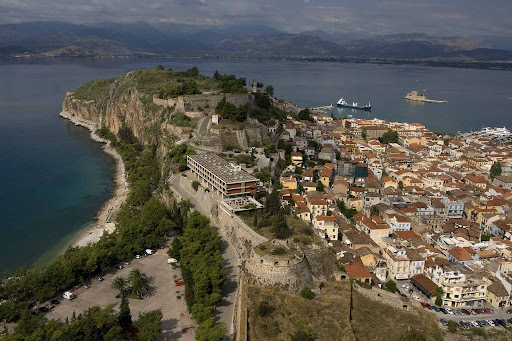 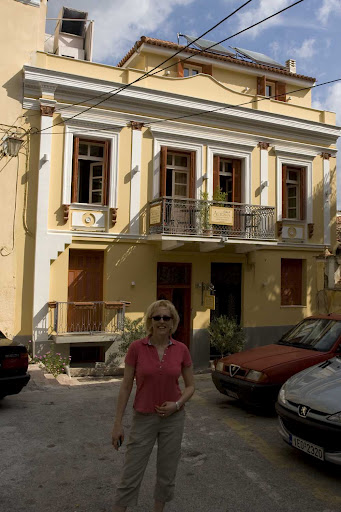 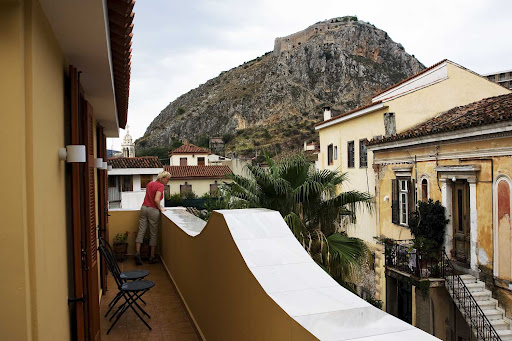 Nic and the view of the Nafplio fortress from our balcony
Breakfast was a complete over the top sugar/carb overload indulgence! And SO much of it! We made a good go of it, though. But we definitely worked it off by climbing to the top of the Fortress overlooking the city. We made it to the top a few times – we would get to what we THOUGHT was the top and then look beyond the wall or gate or parapet and it JUST…KEPT…GOING! It was pretty damned exhilarating. Just like a gigantic fort of our imagination as a kid – so much fun to explore! (Except for the prison – Nic was having no part of entering that tiny hole!) 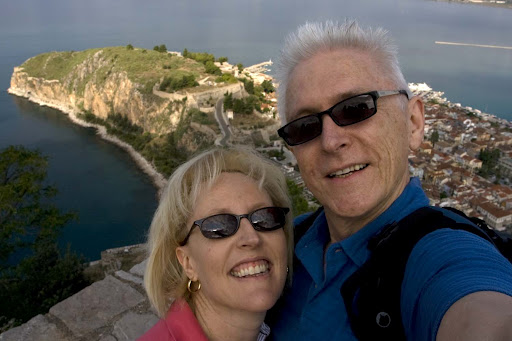 Nic and John atop the fortress

Bad ass Nic on sentry duty
Chatted for a while with a Welsh couple we met (also teachers). Very helpful conversation – they told us about another old theatre (near Epidaurus) that is still used for performances and concerts, and it seats 14,000 (!!). Although this was in the complete opposite direction we were planning to go, we decided to do a little sideline to experience it. (But made sure before we left Nafplio that we sampled the produce of a traditional Italian gelateria – the absolute BEST ice cream we have EVER eaten. All fresh milk, cream, eggs and the darkest, richest chocolate ice cream ever! Felt all that dairy all day!) The trip to the theatre was so worth it – and not just because of the impromptu performances by tourists. A busload of French visitors broke into a traditional folk song and a lone German woman gave us a few bars of operatic solo. You could stand in the middle of the orchestra and drop a coin on the stone underfoot and hear it in the back row. Historians are not sure if the phenomenal acoustics were by design or an accident! It’s got something to do with the seating being all lime stone – it muffles the low frequency noise and amplifies the high frequency, like the actors’ voices. Brilliant! 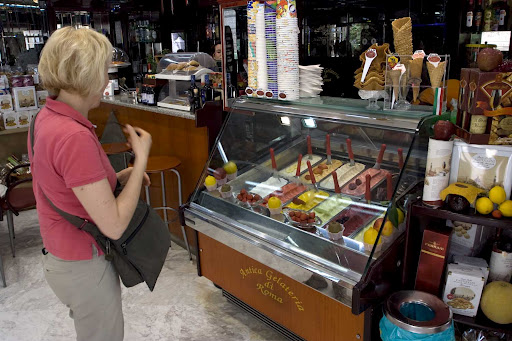 Ice cream…
Drove to Sparta that afternoon looking for a room for the night. Found the city to be not the ‘ugly’ thing all the guidebooks (and people we spoke to) had warned us it would be. It certainly didn’t have the beauty that Nafplio had, but it had a certain character, and it seems to be trying very hard to rake in the tourist dollar. Its ruins are a bit underwhelming. Mostly because not much effort, as yet, has been put into excavation – so there are a few rocks, a bit of a Roman wall and the hint of a curve of a theatre to see. But these are surrounded by a grove of very old olive trees, so it is the perfect place for a picnic. The only other thing we had time to see in Sparta was the bronze statue of Leonidas (a fairly recent addition to Sparta…the 70’s?). 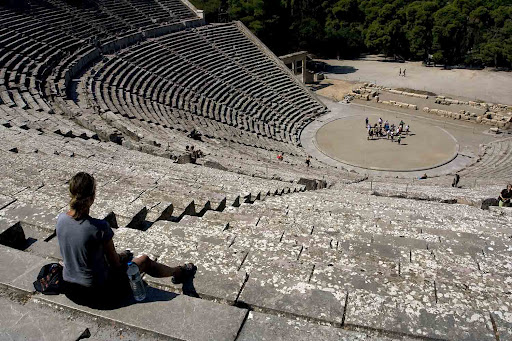 Theatre of Epidaurus
Interesting dinner was had. When trying to order, the first 4 requests were met with a ‘No, not today.’ We may as well have just said, bring us what YOU think we might want out of your selection for today. It was all delicious, so it really didn’t matter. We were both very tired and much needed sleep was most welcome when it came early that night (all in preparation for another big day). 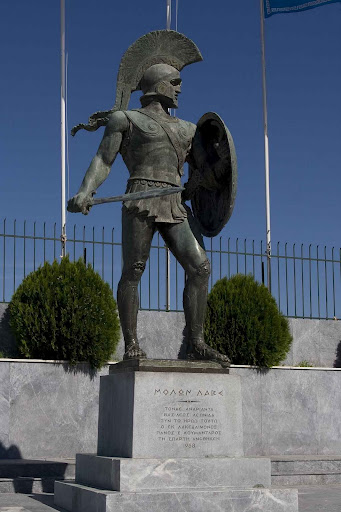 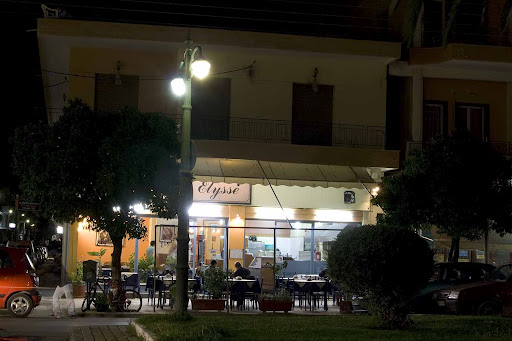