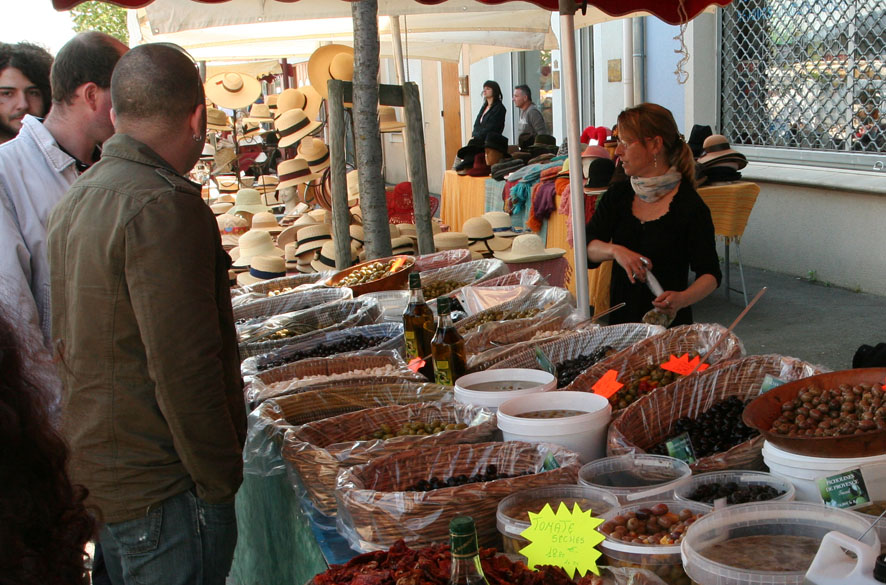 On our way north to Vaison La Romaine we stopped in Coustellet for the markets which were very good and, apparently, much less touristy then Isle-sur-la-Sorgue. Combined with our visit to the Goult grocer before we left we had enough picnic things for a lovely lunch somewhere on the way – the usual things, fresh strawberries, bread, cheese, pate, apples…and, of course, wine. Stopped just outside of Vaison on a park bench for our snack and received some ‘bon appetit’ from passers by. 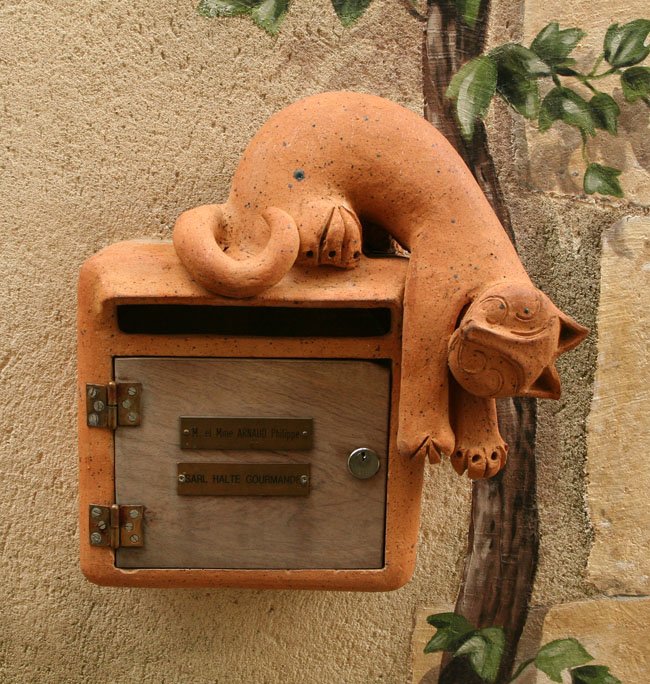 How cool is this letter box?!

Vaison is really two towns – the medieval part on the hill and the more modern one on the bank of the river. We stayed in the medieval part in a huge old home that was once 3 separate houses. It was full of beautiful art and books and had a wonderful terrace overlooking the newer part of Vaison. As usual, we spent our first afternoon orienting ourselves to the town. The medieval part is quite small, but gorgeous, with really only private homes, a couple of B&B’s/hotels, some galleries and some eateries. The main part of town has everything else. 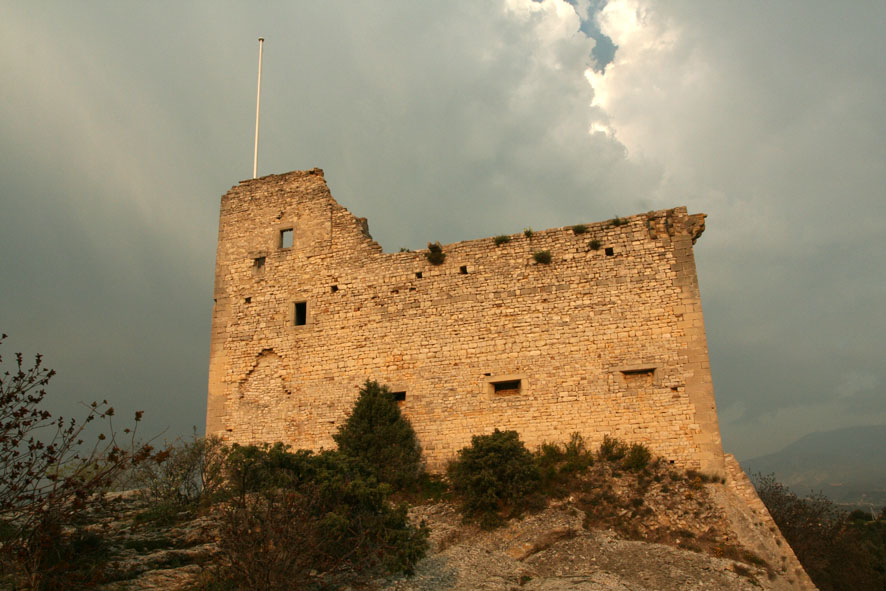 Ruins of medieval chateau in Vaison

We got caught in the rain after a very hot day and popped into one of the many tourist cafes on the main square for a beer and a very unusual savoury crepe with spinach, egg and ham. Interesting. Of course, the rain meant plenty of photo ops for John so he was tres content running around snapping ferociously! 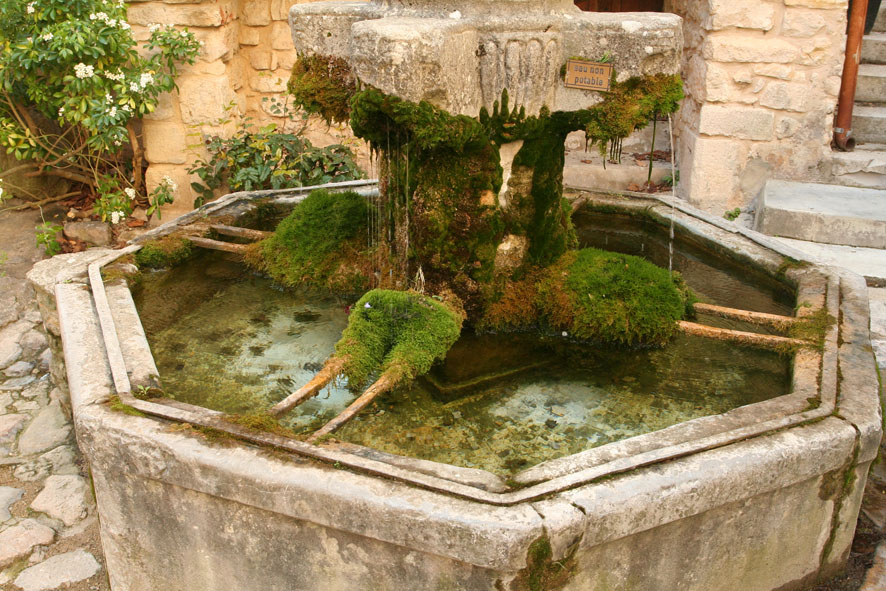 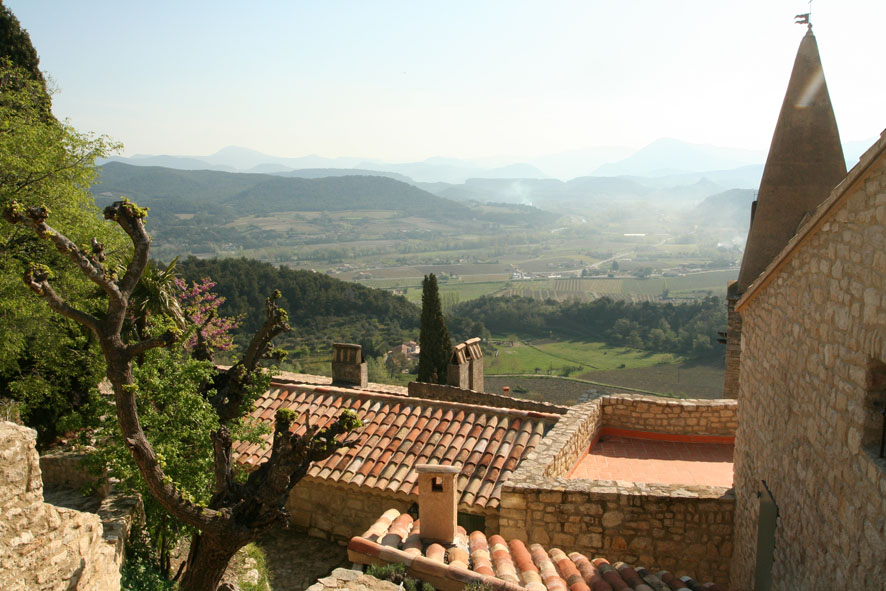 View from Le Crestet a la Sound of Music

The next day we did a bit of a tour of the region in the car beginning in a tiny place called Le Crestet. Quaint, small, lovely, not a soul in sight the whole time we were there. Did hear someone’s alarm going off at 10am that they had obviously forgotten to turn off before going away (there were letters in the box), so it must go off every morning. Annoying for the neighbours. 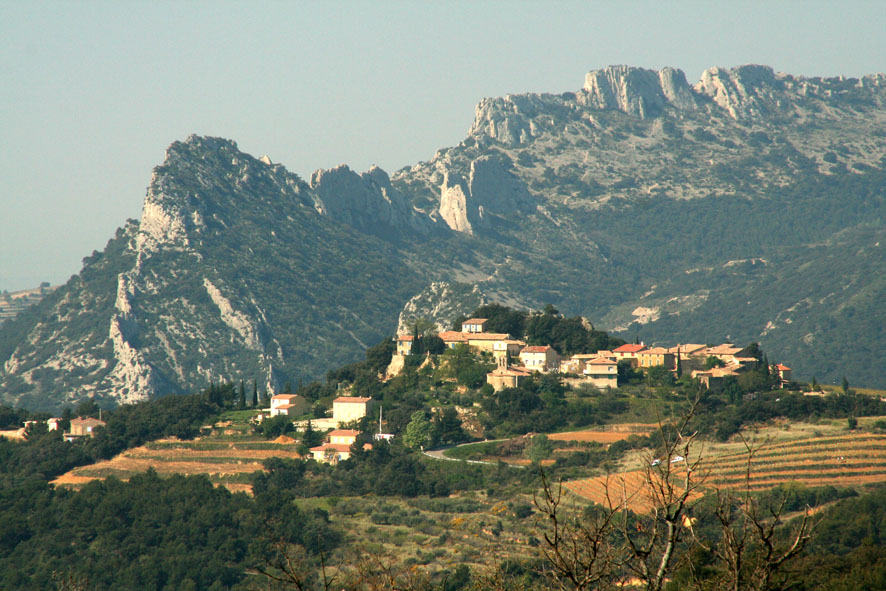 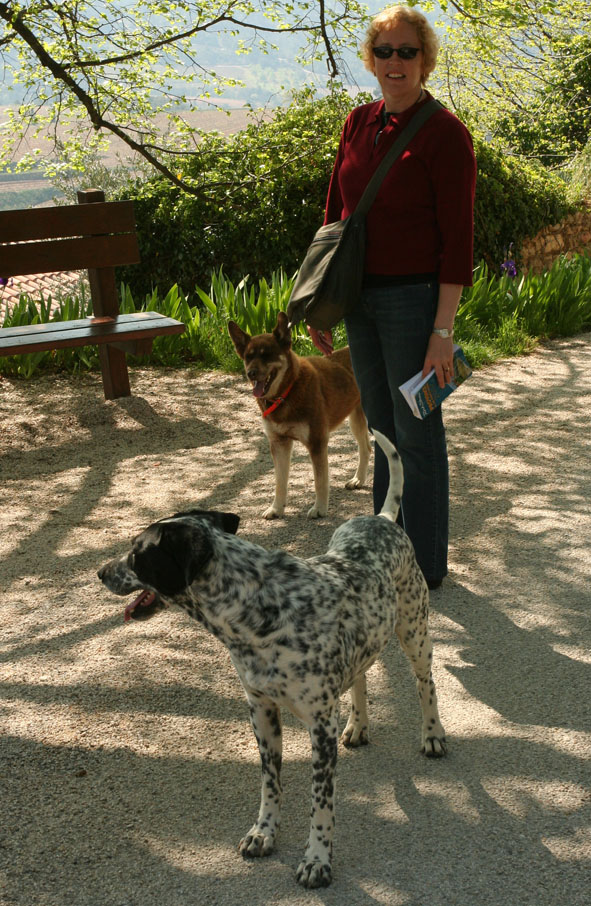 Nic and the dog guides of Suzette…as opposed to guide dogs!

Continued on to the most glorious view of the Dentelles de Montmirail. With another tiny village called Suzette in the foreground it looked like yet another perfect postcard. When we got to Suzette we parked in an otherwise empty carpark and were greeted by 3 boisterous and friendly dogs, who, once they had calmed down, proceeded to show us around the village. They walked ahead of us and whenever we slowed or stopped to take a picture, would wait and turn around to see if we were coming. When we’d had enough, they escorted us back to the car. One was a kelpie – she was lovely. 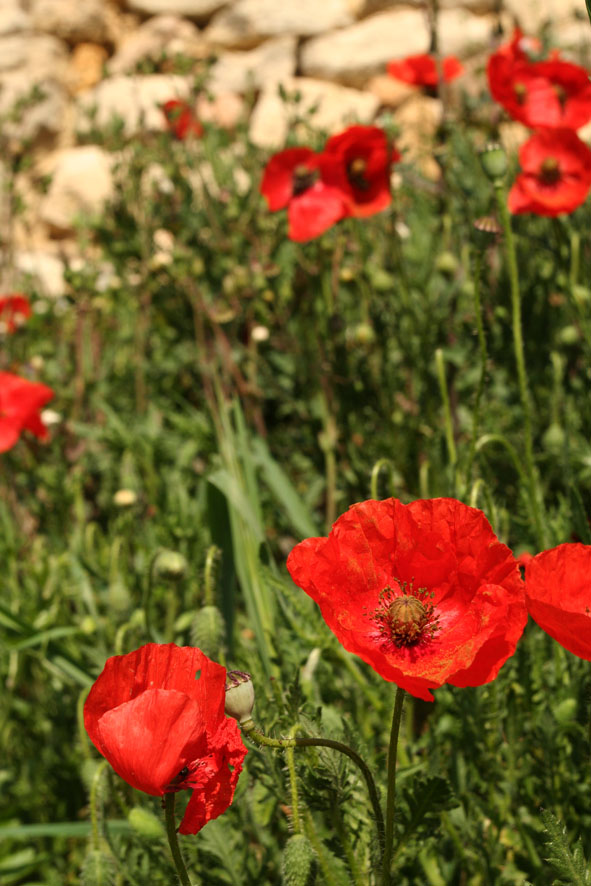 John was so excited – after weeks of waiting, finally poppies!

We then called in at a winery, Domaine de Coyeux, for a bit of a tasting session. The guy running the place that morning had only a little more English than we have French, so there was a bit of miming going on, but it was fun. Bought 2 bottles of red to accompany our picnics. 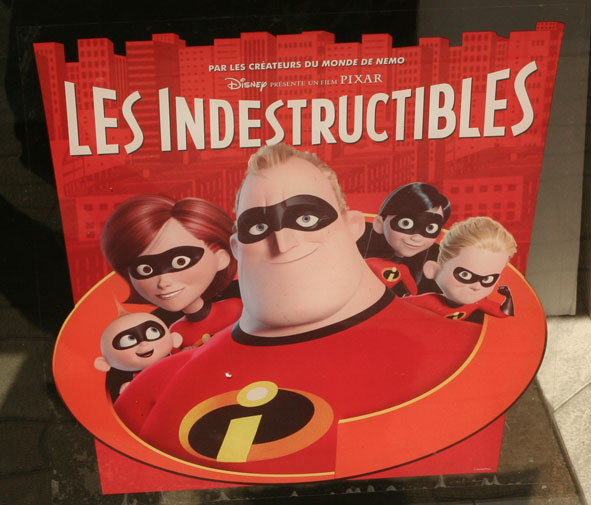 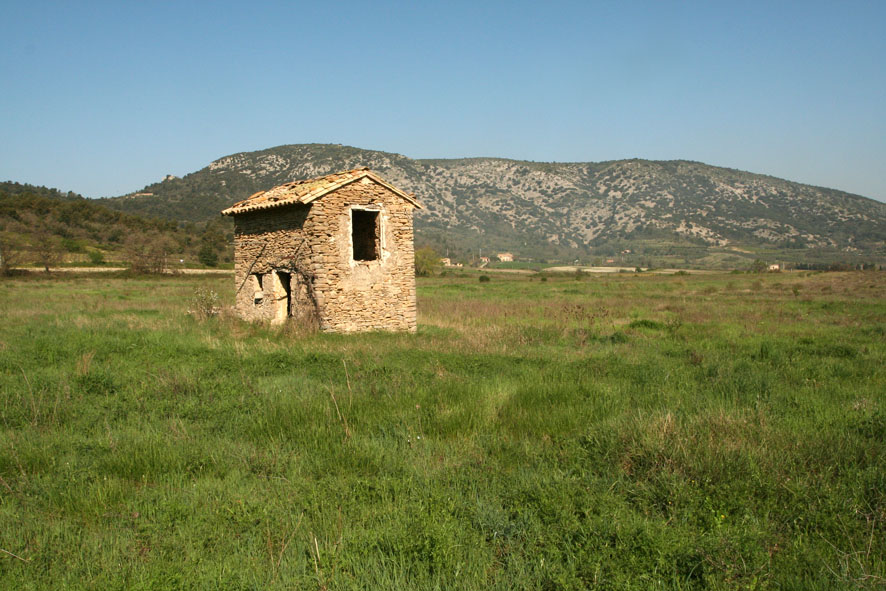 A little ‘renovators delight’ in Provence!

Went back to Vaison for a spot of lunch at a fabulous place called Le Tournesol for the most reasonably priced and yummy lunch we have had. Only €13.50 each for a 3 course meal, beautifully presented and tasting fabulous, as well as a quarter carafe of wine. Unbelievable value! The duck was fantastic! 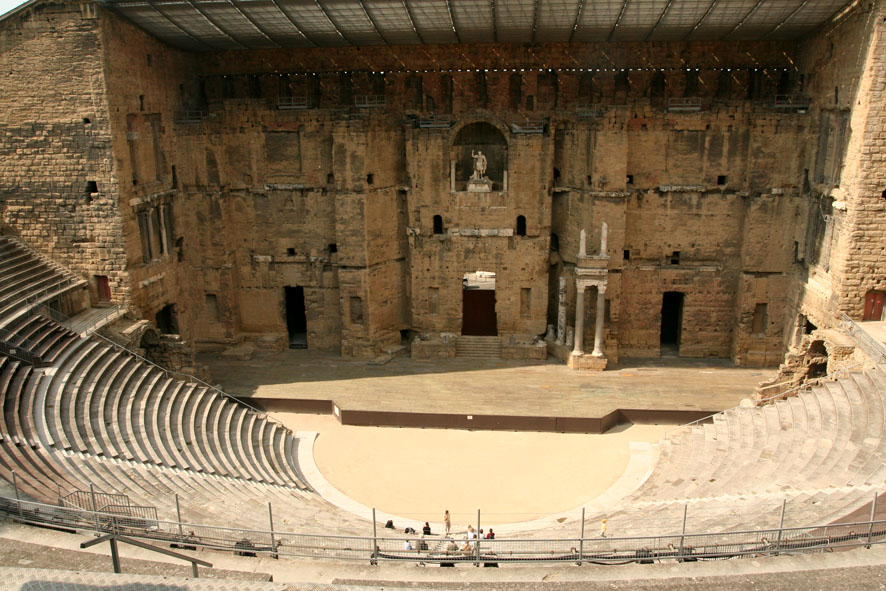 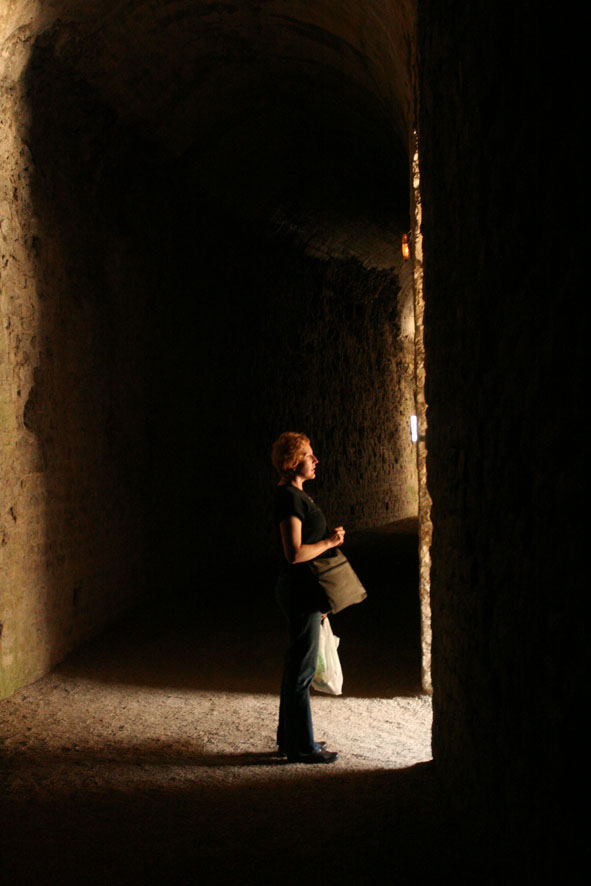 Nic, waiting for an entrance?

Proceeded from there to Orange specifically to see the Antique Theatre. It is the only Roman theatre in all of Europe that still has the stage wall standing – and it is gi-normous! It was a real eye-opener for us. All pictures of ruins of theatres show this open aired structure with tiered seating and we always thought that’s how it was. In reality, it had an absolutely huge stage wall as well as a roof of canvas to keep the heat and other elements off the audience and actors. Truly amazing.

We then spent the evening wandering around Vaison with John capturing many magic light moments with his camera. An ice cream was all that was needed for dinner after our lovely, and filling, lunch. 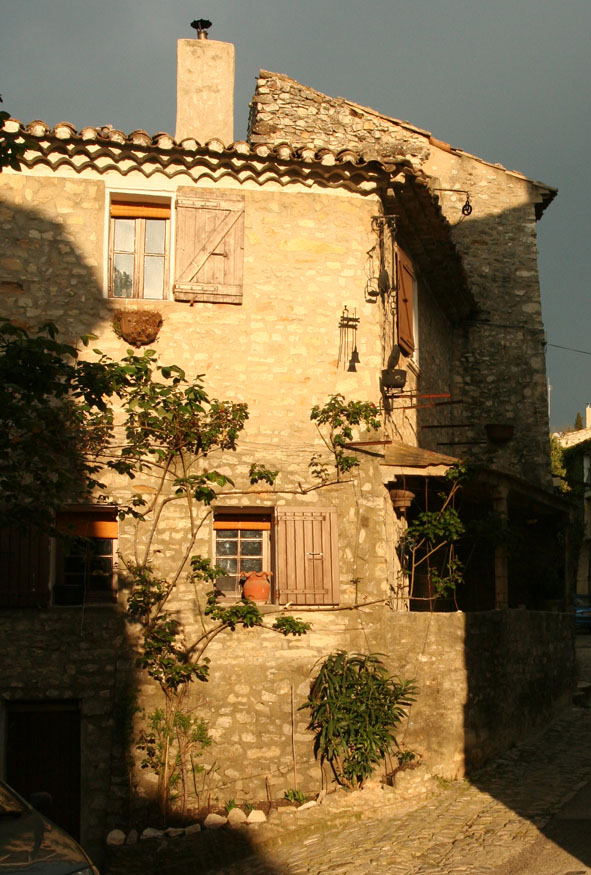 Yet another pretty house in Provence

Our departure the next morning was after a visit to the markets in town. These were the best markets we’ve been to so far. So many stalls everywhere in every street and lane with everything from produce to clothes to tools. Stocked up, once again, for a picnic on the way to our next destination. 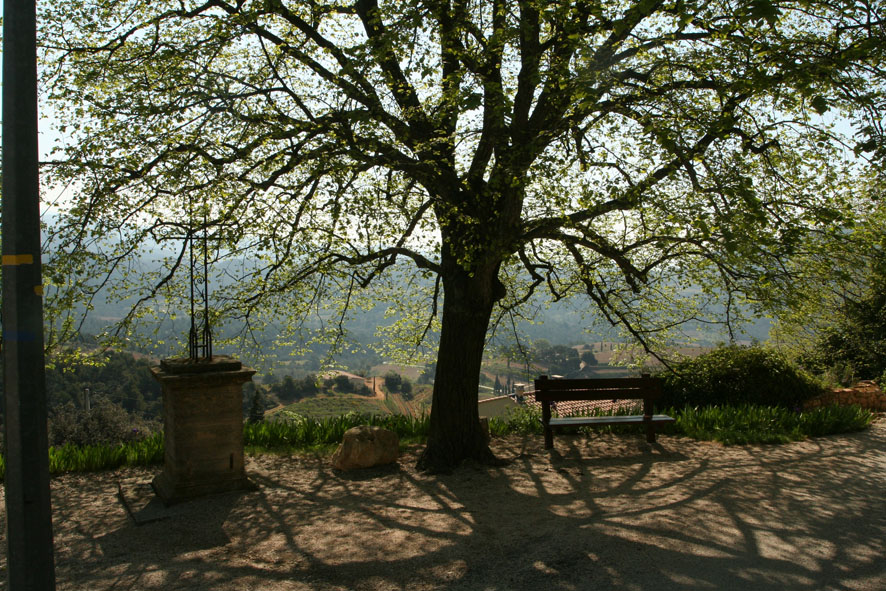 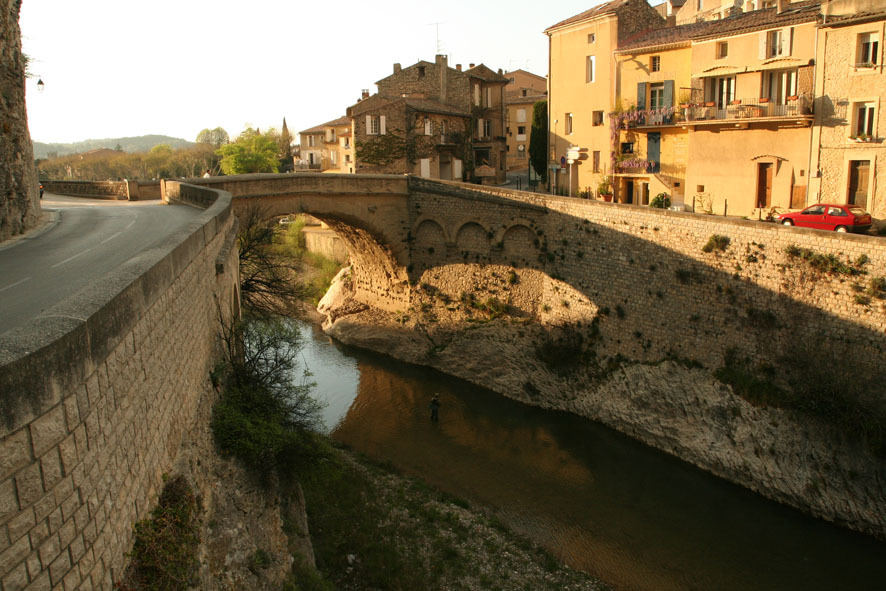