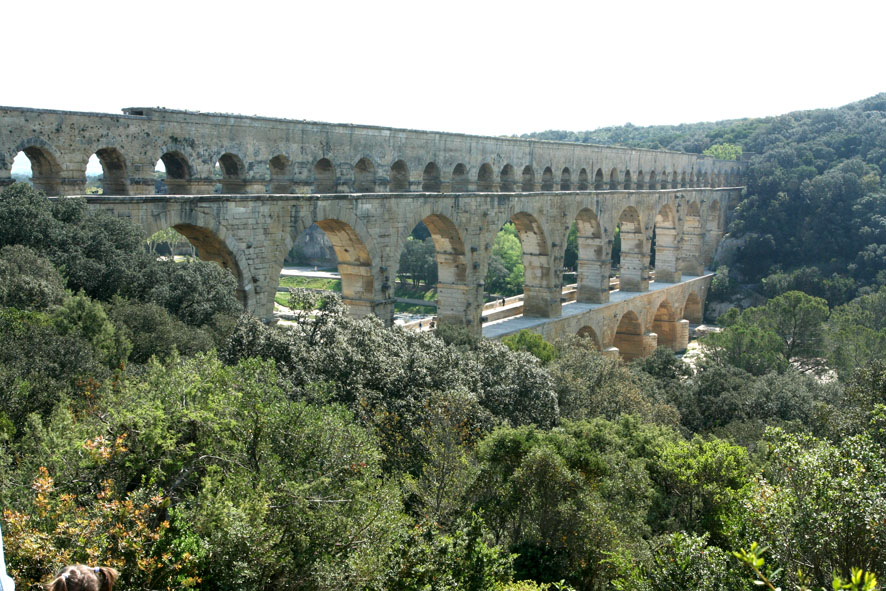 Thanks to our great night’s sleep, we headed off very refreshed to Arles, via the Pont du Gard, Uzes and Nimes. The Pont du Gard was a phenomenal feat of engineering. The size alone was enough to marvel at, but having had a brief visit to the museum before hand (there was so much to see but we didn’t have much time), we were able to really appreciate the sheer brilliance involved right from conception. Very glad we made the detour. 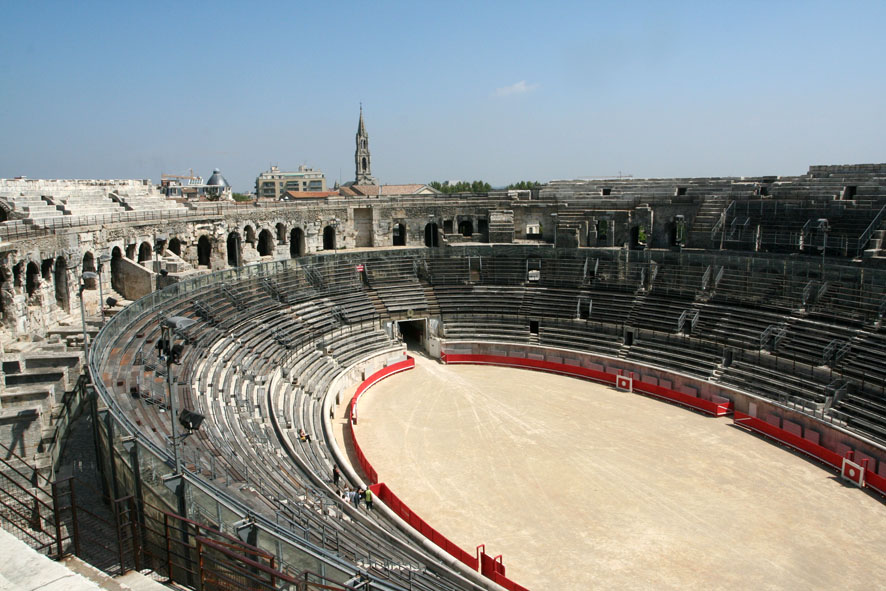 Arena at Nimes (set up for bullfights) 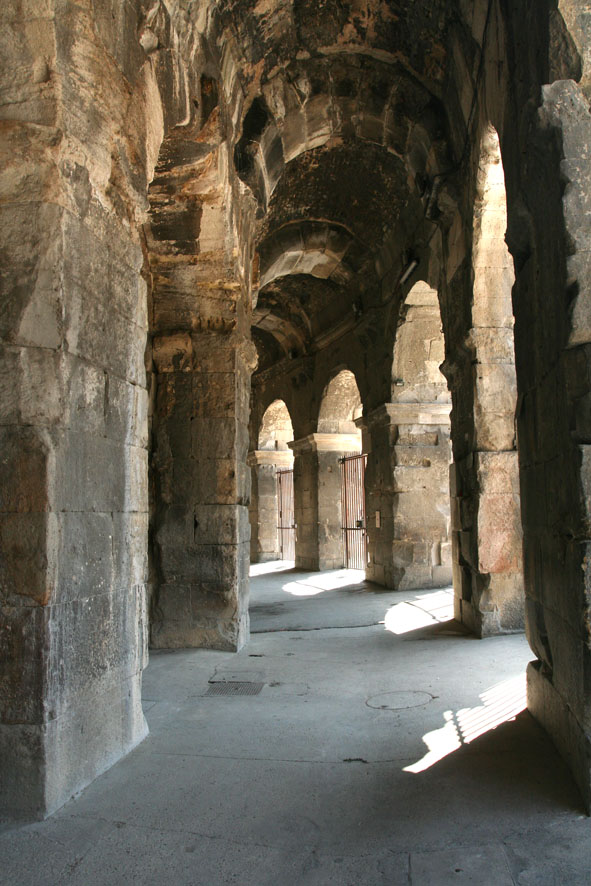 Uzes appeared to be a beautiful, sweet town, but we only stopped to get some picnic provisions before moving on. It had some beautiful old buildings and tree lined streets. It would be a lovely place to come back to and spend some relaxation time there.

We moved on to Nimes where the Roman Arena was the big draw card. They had a very thorough audio guide that you could’ve sat listening to all day. It had so much detail about the ‘entertainment’ in the arenas and the different types of gladiators. The arena would’ve held 24,000 people in its day. What was amazing about these structures (the arenas and theatres) is that they were used as little walled cities at various points in their history. The arena in Arles accommodated 214 homes and 2 churches (although I am jumping the gun – in the commentary we are not yet in Arles!). 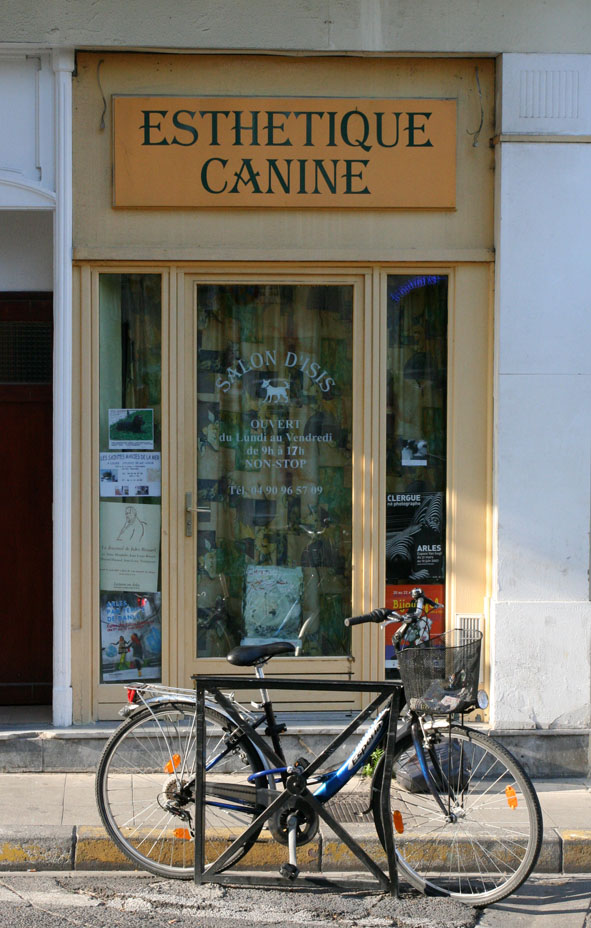 So, without further ado…drove on to Arles and found fairly easily our little Hotel le Cloitre (which was originally the cloister provost’s residence). The owner Jean-Francois was very friendly and helpful, even to the point of escorting me down the street to find a tube to post home a little watercolour! Arles is a lovely city. Easy to walk around – everything is so close (not only due to the location of our hotel!).

Just outside our little hotel 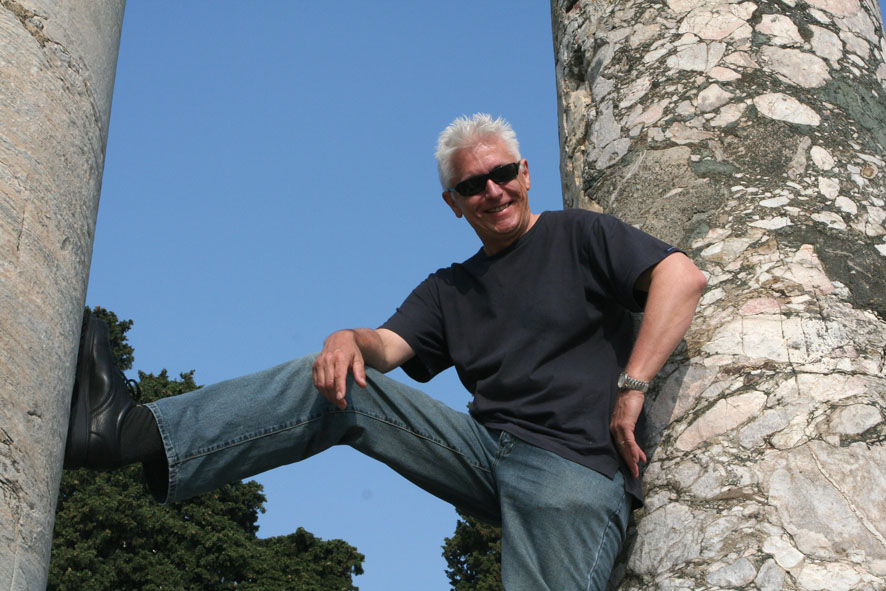 John in what is left of the theatre in Arles 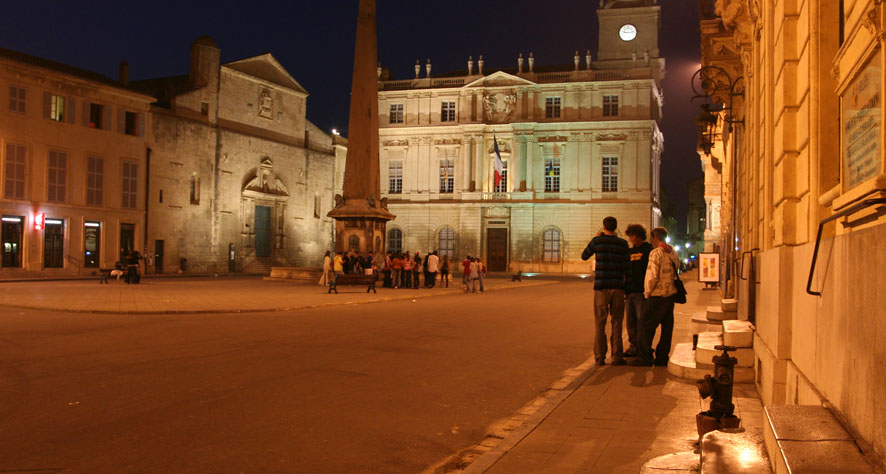 Every town has a ‘Place de la Republique’ – this is Arles’

Went to a little restaurant called Le 16 and had their house specialty for dinner – bull with red rice. Bloody beautiful – the meat was so tender that it was like cutting a piece of fish, it came apart in flakes and melted in the mouth. To top this off was a gooey chocolate cake, called ‘half cooked’ chocolate cake…only in French!…(kind of like a self saucing pudding). 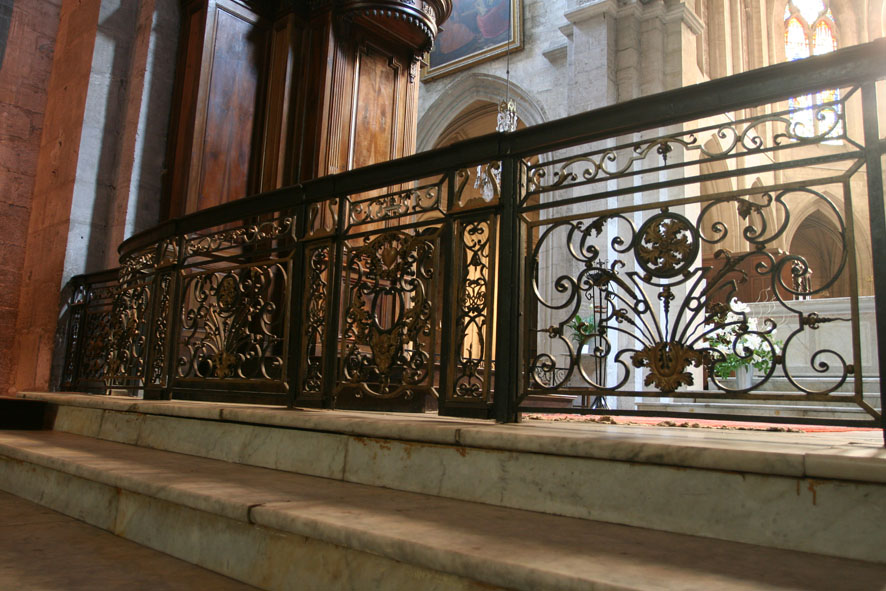 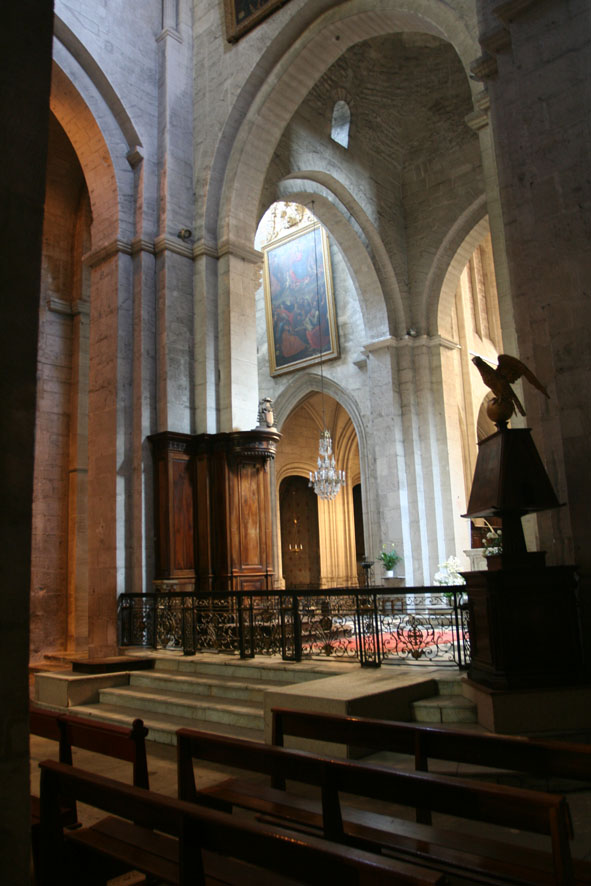 Spent the next day in Arles wandering around the ancient sites, checking out where Van Gogh used to hang and window shopping. Also caught up on blogging! Checked out the Café at Night in that fabulous painting (that we have a print of in our house!) only to discover they’ve cashed in (of course!) and now call it Café Van Gogh (AND they’ve painted it yellow! – in his painting the original yellow tinge was from the gas lamps, not the paint on the walls of the building!)

Before leaving Arles we went to the Saturday markets which had the most wonderful array of produce. The first stall we came to was stunning – all these spices and herbs in little dry sand castle mounds in shallow baskets. A veritable feast for the eyes and nose! Bought some cashews, roasted almonds and dried apricots. Tell you what, there is nothing like FRESH nuts, not the things we buy in supermarkets that really are stale before we even open them! Wish we had markets every Saturday morning. 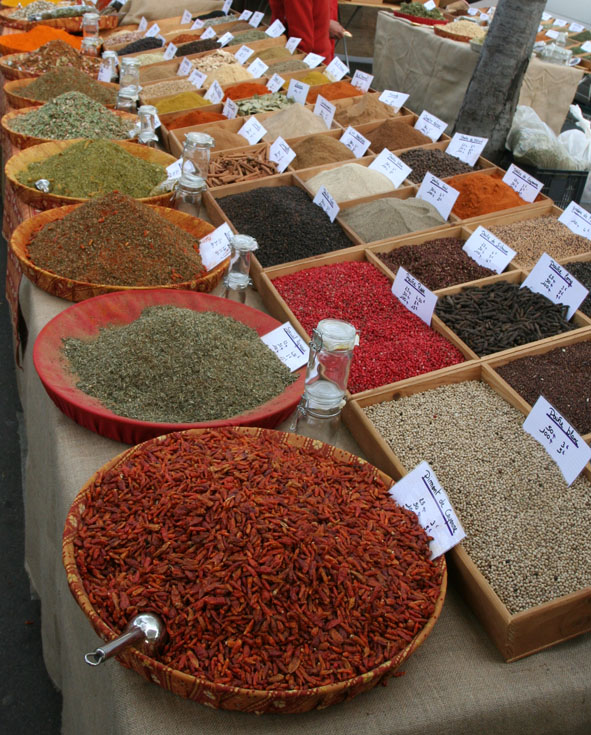 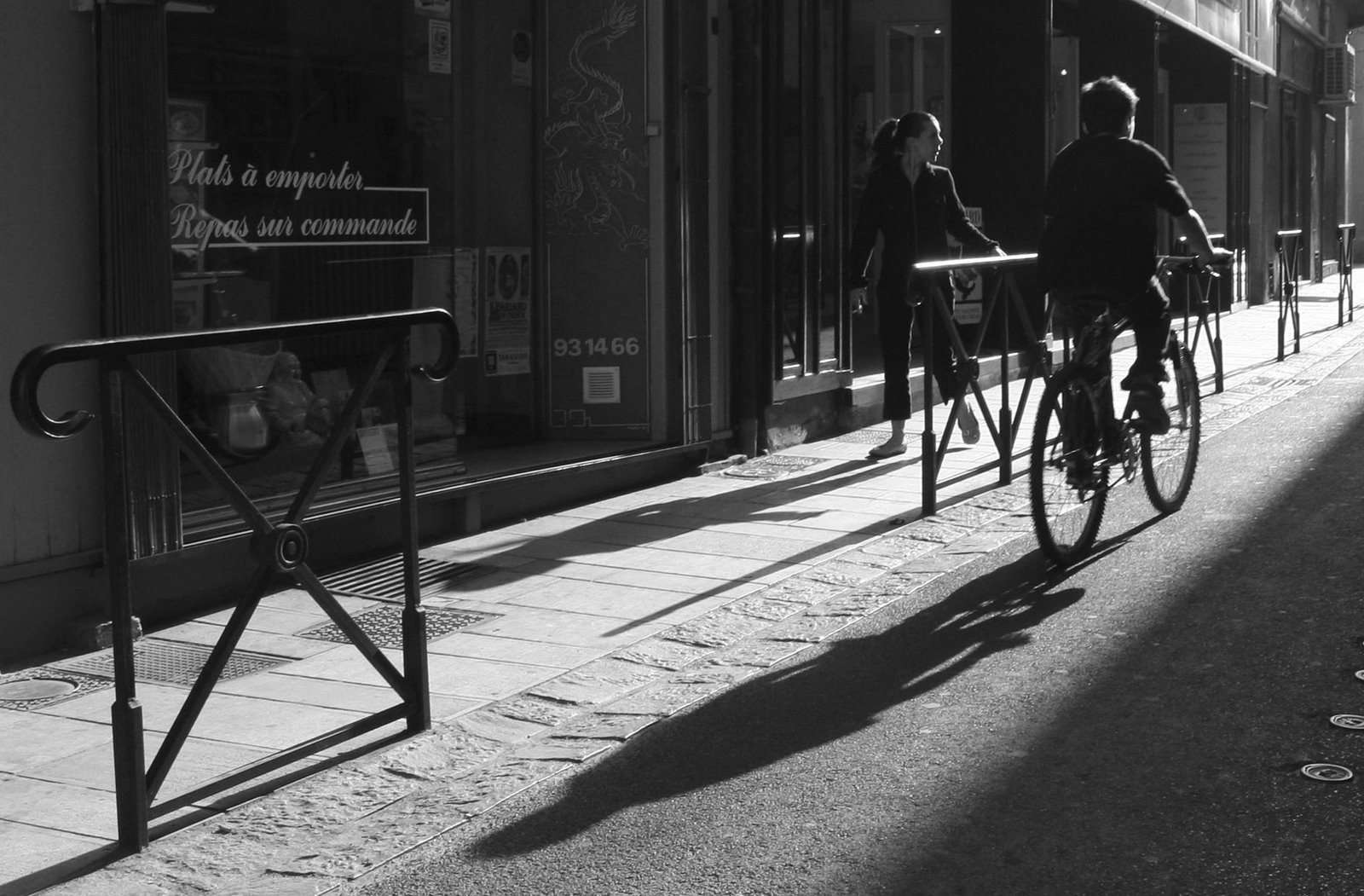 One Reply to “Arles”