Tiger’s Nest (Taktshang Goemba) is one of the most iconic sights of Asia. While most people have seen a picture of the monastery clinging to the side of a cliff, not many know where it is. Tiger’s Nest is one of the big draw cards to the tiny, peaceful and happy country of Bhutan. In fact, the success of the country is measured by the Gross National Happiness (GNH), a much richer objective than GDP or economic growth, and has Buddhism at its core.

We were collected from our hotel at 8am and had a 20min drive to the starting point of the walk. Next to the carpark, souvenir sellers were beginning to set up their stalls for the day and horses and their wranglers were eager to offer the less able or inclined an alternative to the significant climb. Quite a few people took this option, but I wonder if they understood that the horses only took their riders to the look out point, not beyond, where the monastery was still an arduous, stepped walk away.

Peace flags were everywhere, as in all other places of religious significance in Bhutan, hanging in multiple, dipping, reaching lines. They were in various states of assemblage, vibrant in colour to fading and sunkissed, and tattered to robust in shape, lining the path and funnelling us to the holy destination.

It was a 900m ascent to the monastery, with a welcome break for tea and biscuits at the ‘half way point’. The resident cafeteria cats lay in the sun or sat charmingly at your feet (or on the table!) hoping for bit of left over biscuit for their morning tea. The break was also an opportunity to take in the views at leisure rather than concentrating on where to place your foot with surety on the hike. The air in this country is the unpolluted tonic for your lungs that you imagine when you look at any crisp, sparkling photo of the Himalayas.

Beyond the coffee break stop the path narrowed and upped the challenge for us to remain sure-footed. I began to see why some opted for the horseback option. But we continued and were relieved when the path began to flatten out along a ridge and took us to the grand viewing point. From there we could see Tiger’s Nest clinging to the rock face of the sheer cliffs opposite us, shaded from the morning sun by its host monolith.

When the realisation hit some of the tourists that to reach the white walled, gold and russet-roofed monastery opposite one had to climb down and then up a whole bunch of steep stairs, they instead took their photos, turned and made their way back down the hill. In fact, it was surprising the number of people gathered at the viewing point that opted out, but they were a large tour group and maybe their mobility (or lack thereof) informed their decision.

We forged ahead, nibble with exhilaration and earnestness. The descent into the cliff fracture brought with it cooler air and a bridge crossing a waterfall, but the relief of the downward steps was brief as we started the final leg of our climb towards the monastery. Upon arrival at the gate, army guards ensured that none entered with bags or cameras (there were lockers to store belongings), but some tourists were more than a little put out and tried to argue the point. Considering the requirements at other religious sites, I’m not sure why they were surprised. And who tries to stand their ground with a uniformed guard in a country other than their own?

There was much to admire in this temple complex. The development from cramped meditation cave in the side of a cliff to the collection of buildings here today has taken centuries, with the most recent changes being the rebuild at the beginning of this century after the fire of 1998, which destroyed the main building containing many valuable paintings, artefacts and statues. People are divided on whether the fire was an accident or arson to cover theft, but a monk died in the process.

But the beauty and mystery of Tiger’s Nest is mesmeric. Not only in the pure form, line and decoration of the external structures, but inside the intricately detailed murals and finely carved statues are splendid.

Of all the structures that the general public were allowed to visit, the one that had the most impact on me was the tiny Dubkhang, the cave where Guru Rinpoche meditated for three months. While the word ‘cave’ is used, it is basically a small shrine room with relatively simple adornment. There was a sense of serenity in this unassuming little retreat, that lacked the dazzle of the decoration of the others, but provided a certain quietude. Or maybe the peacefulness wasn’t absent in the larger temples; maybe I just wasn’t feeling it with the jostle of tourists trying to hurry us through our visit. In this little temple, visitors were encouraged to find a spot to meditate and a smiling monk was on hand to bestow on us a blessing of long life.

And it truly was with a calm heart and mind that we left the cave and made our way through the gate of the majestic Takshang Goemba. It is hard to imagine that anyone could visit such a place and not be touched by the sense of peace it imbues, no matter one’s beliefs or spirituality.

The return visit to the café for lunch was slightly easier, as the only ascent was the climb out of the valley at the base of the monastery. We paused at the top at the 3,140m viewing point and snapped some more pics of Tiger’s Nest – the sun on the monastery provided much better shots than the shaded aspect of the early morning.

The cats awaited us at the café, more insistent in their presence than before – a delicious hot buffet lunch has more appeal for all of us than biscuits! And they happily finished off any leftovers as people headed down the last leg of the climb to the waiting cars, drivers and souvenir sellers in the carpark.

Most people are under the misapprehension that Bhutan has a cap on the number of visitors per year. This is not the case – they do have a daily fee of $250 USD pp for being in the country, but that covers your accommodation, meals, guide and driver, as well as contributions to the health and education of its citizens. The accommodation is of a 3 star quality, and you can pay an additional supplement if you are interested in staying somewhere more luxurious. Tourists are not permitted to ‘go off’ on their own (for activities such as trekking), and your guide and driver take you wherever you wish to go in the country, following an itinerary planned with you prior to travel. The cost and these restrictions are Bhutan’s way of preventing the country from becoming a ‘backpacker ghetto’ – they have no desire to be the next Nepal, and in fact, it is illegal to climb any mountains in Bhutan higher than 6,000m (they have the highest ‘unclimbed’ mountain in the world – Gangkhar Puensum, 7,570m). 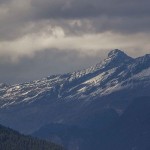 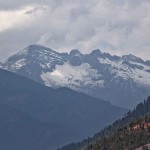 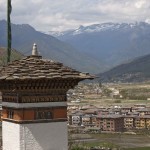 The view of Paro Valley from our accommodation, Bhutan 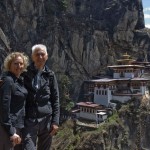 Nic and John, after the climb to Tiger’s Nest, Bhutan 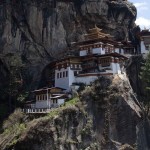 Tiger’s Nest, in all its glory 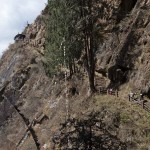 …And looking back up at those same stairs, Tiger’s Nest, Bhutan

The stairs down, Tiger’s Nest, Bhutan 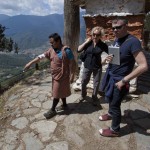 We have to go all the way down, before going up, Tiger’s Nest, Bhutan 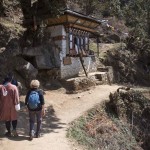 Cooling down after the first of several treks in the day, Bhutan 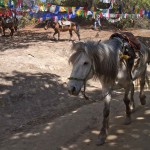 Horse returning for the next paying customer, Tiger’s Nest, Bhutan 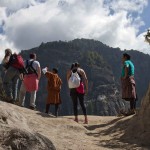 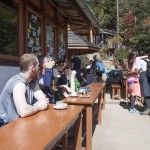 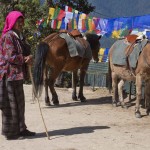 Horses and handler on the path to Tiger’s Nest, Bhutan 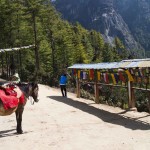 Rest point, with prayer flags, prayer wheels and the monastery in the distance, Bhutan 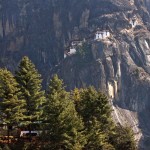 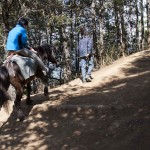 Not one in this shot looks enthusiastic, ascent to Tiger’s Nest, Bhutan 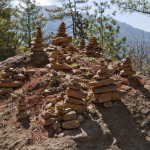 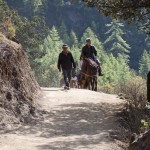 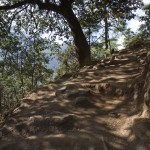 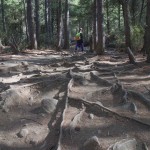 And so we begin, with Tiger’s Nest in the distance 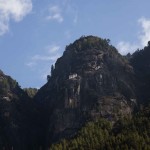 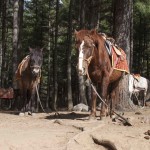 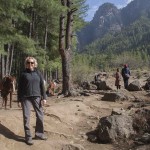 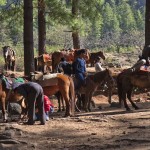 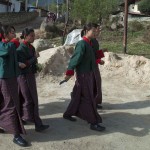 Girls on their way to school in Paro, Bhutan 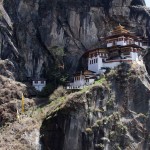