There are many companies in Norway that offer tours in search of the Northern Lights, particularly from Tromso. I found Chasing Lights Tours on TripAdvisor, and liked their ethos of doing everything in their power to enable you to see the ‘dancing green lady’.

At 5:30pm, strangers began to gather at the bus stop next to the yellow church with the white trim in the middle of Tromso. Nods and smiles were exchanged, and as minibuses began to arrive we gravitated to the guide who called our names. Our guide, Mick, and driver, Waggaari, immediately imbued a sense of the good time we were going to have in the hours we were with them, whether we saw the lights or not! Mick was such a positive force – he clearly loves his job and thrives on sharing these moments with those of us searching for the elusive and magical Aurora.

Snug in the warm and comfortable luxurious minibus, we drove for nearly three hours to the point of our first sighting (we did have a toilet stop about an hour into the trip at a Shell garage). The highlight of the bathroom stop was seeing Zeke from the reality TV show Survivor emerge from the toilets. I was so shocked that I couldn’t find words, couldn’t remember his name, and in my efforts to do both, lost my place in the queue for the loo! And no one else saw!!!

The first time that we stopped in the middle of nowhere to spot the lights we caught a glimpse of them behind thin, high cloud. All passengers shuffled off the bus, took some pics, posed for pics, and gawped at what may be the only sighting of the night. While standing in the snow, Mick gave the photographers in the group some instructional guidance with their photography technique, which even the experienced photographers found useful.

Determined to find more sightings for us, Mick bundled us back on board and we kept driving. Our search ended about 50 metres into Finland. Mick took us to a little spot about 10 metres off the road that he had used before and we watched and waited. It wasn’t long before we saw the lights, and it was something to behold! While we couldn’t see the green colours with the naked eye, we definitely saw the movement, and it was astounding how quickly they darted across the sky. The colours are usually only seen through time-lapse photography, but the prancing white and greys were still mesmerising.

Mick determined that this was the spot for the night, so he fed us hot chocolate and cookies while he set up camp, building a fire and placing deerskins in a circle around it for us to sit on. Birchwood is easy to burn, so a perfect choice for the wet snow conditions, and we toasted our toes and marshmallows. We were also fed hearty and warming stew – curried chickpea for the vegetarians and beef for the non-veggos. Some of us continued to warm ourselves by the fire, chatting and sharing travel stories, and leaning back to get a good look every time a new sighting happened, while the photography enthusiasts, like John, continued to stand in the snow patiently taking shots. Several days later, our coats and scarves still smelt of this delicious smelling burning wood.

Around midnight, we climbed back into the minivan, and got ready for a nap on the way home. We immediately fell asleep after a deer and moose sighting, not even stirring for a toilet stop, only waking when Mick turned the lights on in the minibus as we were crossing the bridge into Tromso. We were dropped at our hotel and were in bed just after 2:30am. What a night! But so worth every moment and every cent. Loved it!!

Onwards to our visit to Oslo…

Final shot of the night of the dancing Green Lady, Finland (photo by Mick from Chasing Lights) 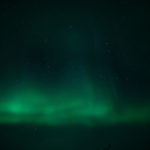 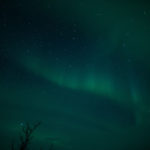 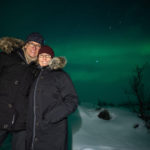 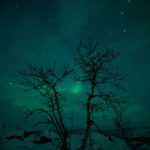 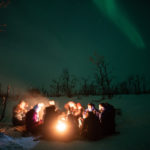 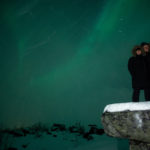 Nic and John, rock ledge in Finland (photo by Mick from Chasing Lights) 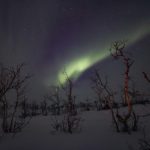 Trees and silhouettes with the Northern Lights, Finland

Our spot for light spotting in Finland 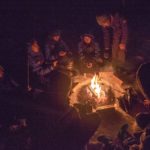 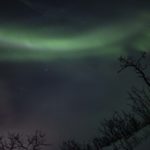 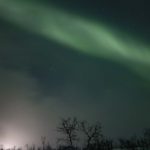 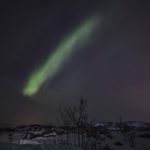 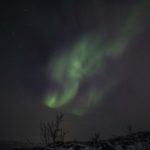 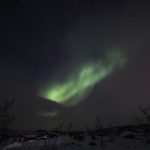 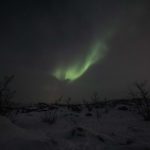 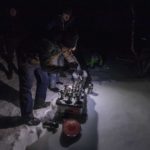 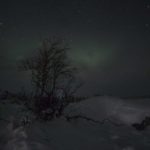 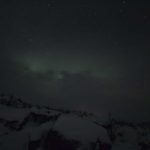 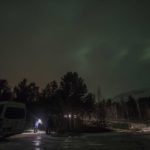 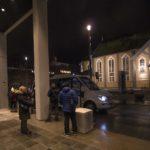 Waiting to be collected for our tour, Tromso, Norway

Christmas tree in the middle of Tromso, Norway 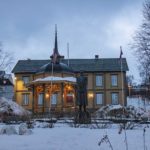 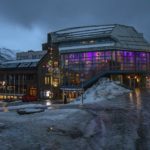 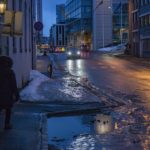 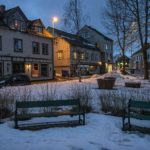 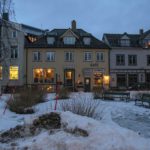 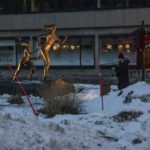 Nic and statues in Tromso, Norway 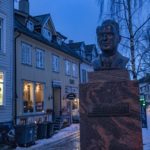 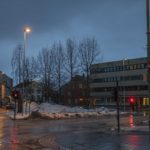 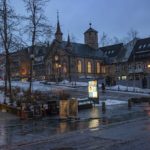 Melting snow in the middle of town, Tromso, Norway 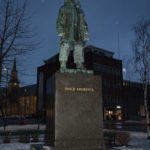 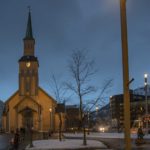