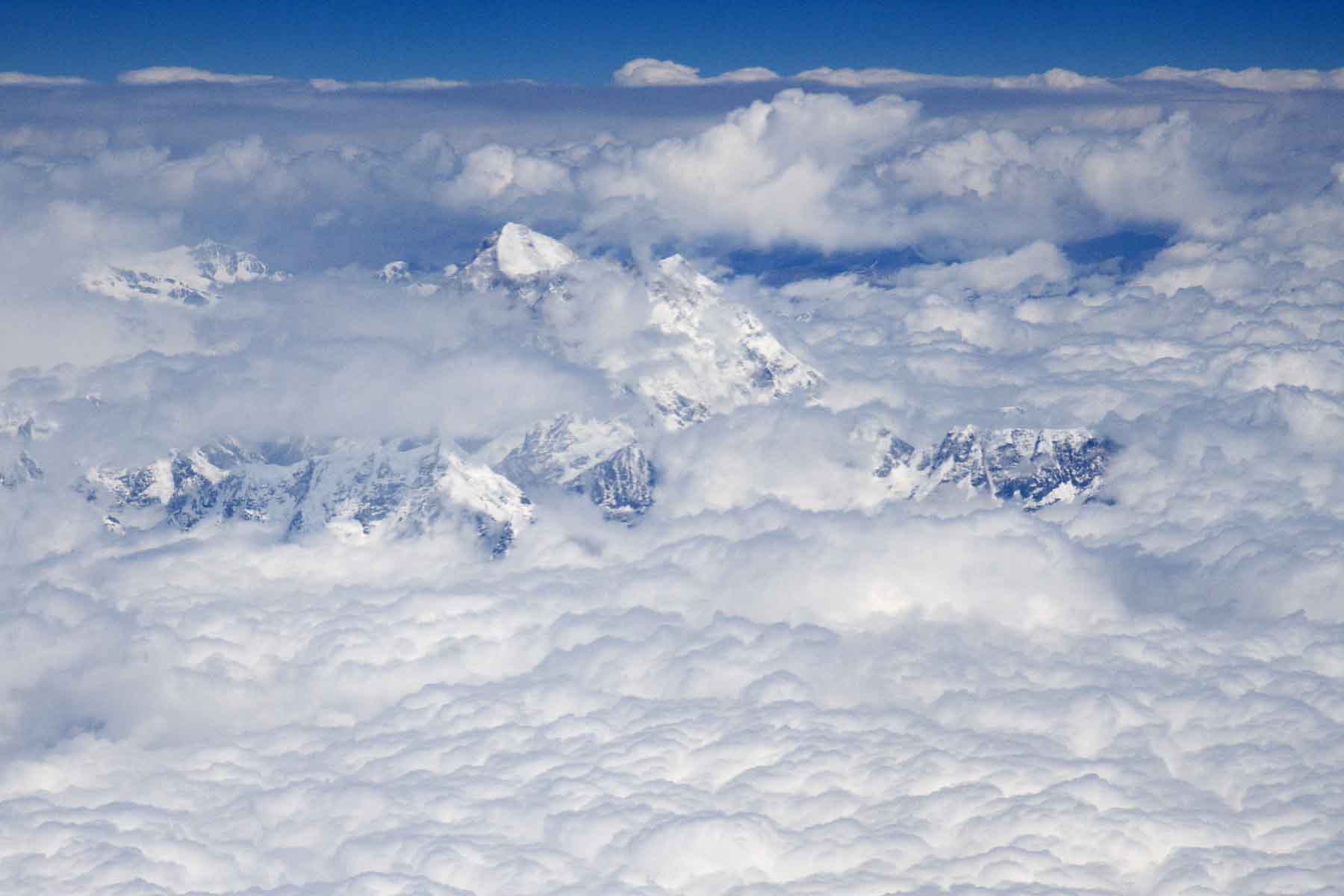 Mt Everest from the window of our plane

Have you ever seen the video filmed from the cockpit of a plane landing at Paro airport in Bhutan? When we made the journey here, we had no idea that this airport is one of the most dangerous to land at, we just thought it was ‘cool’ the way the plane had to take an ‘S’ approach through the closely knit mountains before landing. Only eight pilots in the world are qualified to fly into Paro, and Travel & Leisure have it at the top of their ‘World’s Scariest Runways’ list, but we actually had a ball – weaving left and right following the flow of the mountains and valley before landing safely was exciting!

Our arrival in Paro was actually delayed by many hours. As the airport is a ‘visual landing’ only airport, any fog or impairment of that ‘visual’ will mean flights will be delayed from leaving their destination until given the all clear. We left Kathmandu four and a half hours after schedule, but it’s a delay that is impossible to resent when you understand the logistics of landing!

Walking across the tarmac we were immediately struck by the architecture – if the airport terminal was this beautiful, what did that mean for all that we were about to encounter beyond? Every building in Bhutan has to adhere to the strict aesthetic building codes – even new buildings must reflect the forms and traditions of the culture. Not only is this great for maintaining Bhutan’s heritage, but it provides a steady stream of work for those trained in the thirteen traditional arts of Bhutan – from carving and painting to weaving.

Our guide, Pema Namgay, met us at the airport, and made some wise decisions about changes to our afternoon considering our late arrival. Priority one was to take us to our hotel, Gangtey Palace, for check in before beginning our afternoon tour. This hotel was truly once a palace, and our suite was the Governor of Paro’s bedroom. It is 700 years old, very authentic, traditional (including the gaps around the door that has a draft, luckily a heater is provided and worked very well), but the room is filled with the most amazing and wonderful hand painted woodwork – everything from the furniture to the columns, beams and walls. Gangtey Palace is situated on a hill overlooking Paro with a clear, direct view of the fortress – Paro Dzong. The aspect is perfect at all times of the day, but it is especially nice sitting on the wooden terrace overlooking the valley, local beer in hand, after a day of sightseeing.

Two very important temples were top of the list for our remaining time on the first day, so we headed to the 7th century Kyichu Lhakhang, an extremely sacred place for Buddhists and one of Bhutan’s oldest temples. Our trip was timed well with spring providing the additional beauty of cherry blossoms around the temple to compliment its form and line, so pleasing to the eye. Outside the temple near the oversized and colourful prayer wheels were a bunch of furry cuties relaxing on the flagstone paving, dogs of mixed breed and a range of colours – I was tempted to smuggle one of the puppies home in my backpack.

Dumtse Lhakhang was built by the iron-bridge builder, Thangtong Gyalpo, in the 15th century, and has the conical shape of stupa or chorten and is thus very rare in Bhutan. It contains some of the finest murals in the country, but you need a good torch to see them! Inside the dark temple are three levels – the first floor representing hell, climbing a ladder brings you to ‘earth’, followed by another ladder which gives access to ‘heaven’, where all of your sins and troubles are ‘cast off.’ Outside, the hill that sheltered the temple was strewn with prayer flags, which, once hoisted, remain so until they fade and perish.

The streets of Paro

We wandered around the main street of Paro, with the intention of shopping, but were enamoured with watching the locals in their traditional clothes chatting with friends and enjoying the buzz of the festival. Our trip to Bhutan unintentionally coincided with Paro’s Tsechu Festival, held once a year over four days and filled with dance performances and rituals, so we were very lucky to have happened upon it all. People come to the city from all over the province for their annual blessings from the religious leaders at the unfurling of the thangka, and our arrival was timed perfectly for the witnessing of this pre-dawn ceremony, but more of that in the next post.

Traditional dress in Bhutan is worn all the time during the week, and some people wear contemporary western clothes on the weekend. For men, this is a gho – a knee-length robe similar to a kimono that is belted at the waist, with the overlapping material at the front acting as a pouch. This pouch was once used to carry food bowls and a dagger, now it holds wallets, mobile phones and Doma (beetle nut). Every man, from the king to a commoner, wears the same style of clothing. The only thing that differentiates the status or rank of the wearer on official occasions like the festival or visiting dzongs is the colour of the scarf that is worn over the gho.

The women wear a long, ankle-length dress known as a kira, accompanied by an outer jacket called a tego. As it was festival time, this meant that the women were in their finest kiras and tegos – all in striking hand-woven patterns of beautiful colours – some of these intricately woven pieces would have cost their wearers a significant amount of money.

Strolling down the main street, we popped into a prominent antique store for a look. I fell in love with a colourful antique bowl and lid, but didn’t love it enough to pay the $700 AUD price tag (and it was only 20cm in diameter!). All pieces sold in stores such as this come with authentication paperwork, but the hefty price tag might be due to the fact that the government doesn’t really want Bhutan’s antiques leaving the country.

There were market stalls set up in a field at the end of the street which were quite an eye-opener. We were expecting to see produce and traditional wares, but most of the stalls were filled with contemporary western clothes and plastic in all its forms – everything from cheap toys to tableware. The toy guns were a big seller, popular since television was introduced to Bhutan in 1999, and now with the internet, all things American have become all the rage. It was more than a tad disconcerting to see the juxtaposition of kids in traditional Ghos holding fake pump action shotguns.

The problem with the introduction of plastic to a country that once used only disposable and easily recyclable materials such as woven bowls for food is that they are still learning how to dispose of it. Whereas once they could throw a worn and fraying matted plate onto the ground where it would decompose, now they were dealing with packaging and plastic in all its forms, and throwing it on the ground was just making a mess. When the markets were packed up and gone, the state of the field was like after a rock concert. I asked Pema how the rubbish is dealt with, and he said that uni students are paid to clean it up and recycle. It will be a big learning curve for this country, but I am sure that they will get on board faster than some developed nations!

Our first encounter with the local beer in Bhutan resulted in a huge over order. We were unaware that it came in 650ml bottles, not the 330ml that we are used to, so when we stopped at a resort to use the wifi (Gangtey Palace had problems with theirs), three of us ordered three beers. So that’s what arrived – nearly 2L of 8% Druk 11000 beer. It was very nice, but we learnt our lesson!

Most people are under the misapprehension that Bhutan has a cap on the number of visitors per year. This is not the case – they do have a daily fee of $250 USD pp for being in the country, but that covers your accommodation, meals, guide and driver, as well as contributions to the health and education of its citizens. The accommodation is of a 3 star quality, and you can pay an additional supplement if you are interested in staying somewhere more luxurious. Tourists are not permitted to ‘go off’ on their own (for activities such as trekking), and your guide and driver take you wherever you wish to go in the country, following an itinerary planned with you prior to travel. The cost and these restrictions are Bhutan’s way of preventing the country from becoming a ‘backpacker ghetto’ – they have no desire to be the next Nepal, and in fact, it is illegal to climb any mountains in Bhutan higher than 6,000m (they have the highest ‘unclimbed’ mountain in the world – Gangkhar Puensum, 7,570m). 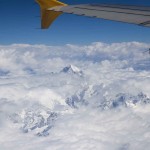 The tip of Everest 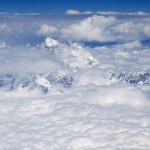 Mt Everest from the window of our plane 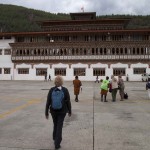 Walking across the tarmac of Paro Airport, Bhutan 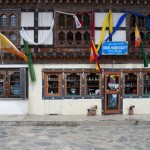 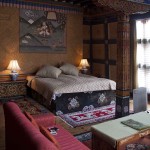 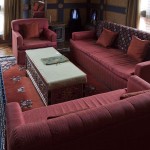 The lounge area of our suite in Gangtey Palace Hotel, Paro, Bhutan 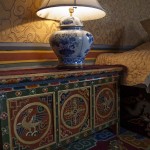 Intricately painted side table in our suite at Gangtey Palace Hotel, Paro, Bhutan

The staircase to the top floor of Gangtey Palace Hotel, Paro, Bhutan 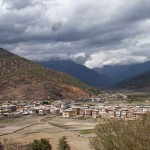 The view of Paro and the valley from the grounds of Gangtey Palace Hotel, Paro, Bhutan 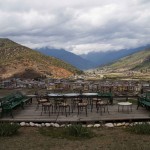 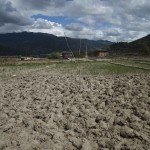 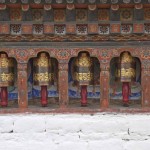 Our guide showing us the Kyichu Lhakhang, Paro, Bhutan 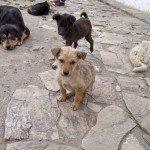 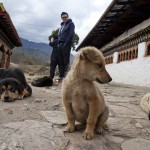 So want to take this dog home… 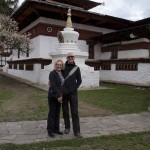 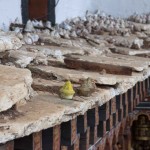 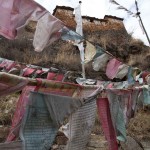 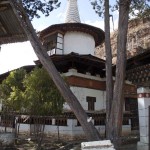 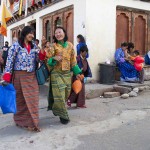 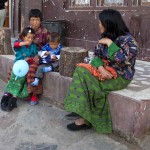 Women stopping for a chat in the main street, Paro, Bhutan 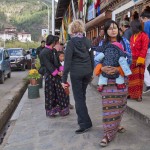 Nic amongst the locals, Paro, Bhutan 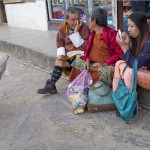 Shopping and a rest, Paro, Bhutan 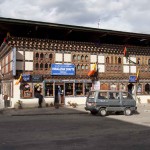 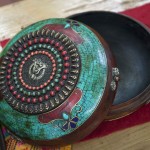 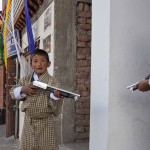 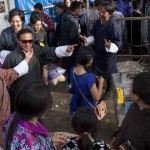 Pema greeting his friend at the entrance to the markets, Paro, Bhutan

Photographs of the Bhutanese royal family for sale at the markets, Paro, Bhutan 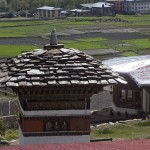 View of shrine rooftop from our room at Gangtey Palace Hotel, Paro Bhutan 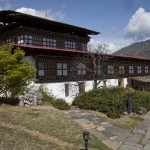