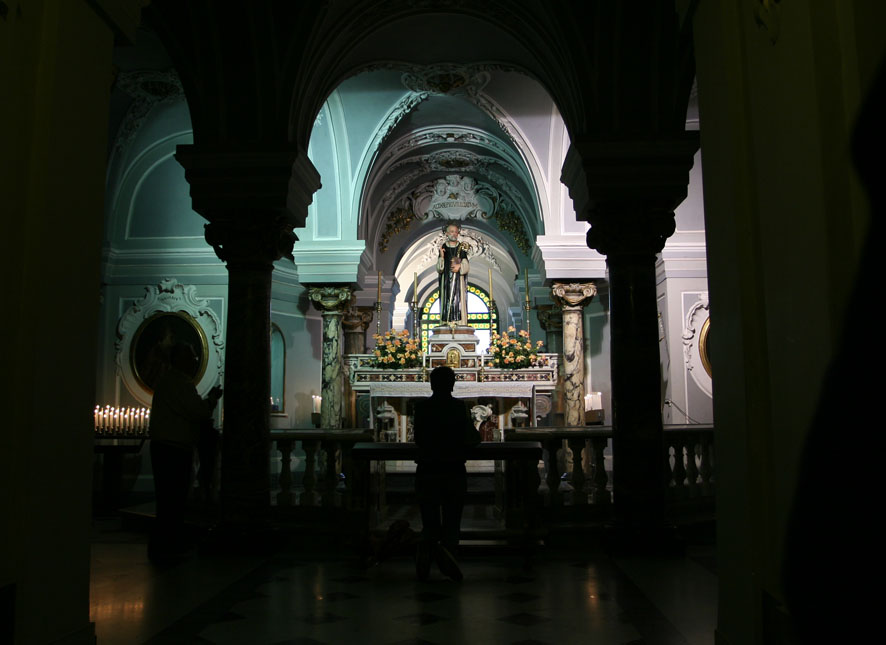 It pretty much rained all day in Sorrento this day. This wasn’t really a problem for us as we had no travel plans like Amalfi coast or Pompeii so we took the opportunity of going to this wonderful restaurant for lunch which is in an old monastery (near the Piazza St Antonio). It is called Ristorante Il Buco and it was divine (!!). We passed on the degustation menu (it’s hard to believe) and instead chose our own delights. John started with the anchovy fettuccini and Nic had the pork filled pasta with a tomato sauce (these were ‘first courses’ – we skipped ‘starters’). For second course Nic had the seabass fillet cooked in lemongrass served on a bed of buttered potato strips and a fabulous asparagus and citrus rind mix on the side. John actually chose best for this course – lamb cutlets crusted in the most amazing herb mixture on a potato gratin. Nic won the dessert prize with an exquisite and tiny almond and hazelnut soufflé with a mocca cream sauce. Although John did well with a very flash cassata. 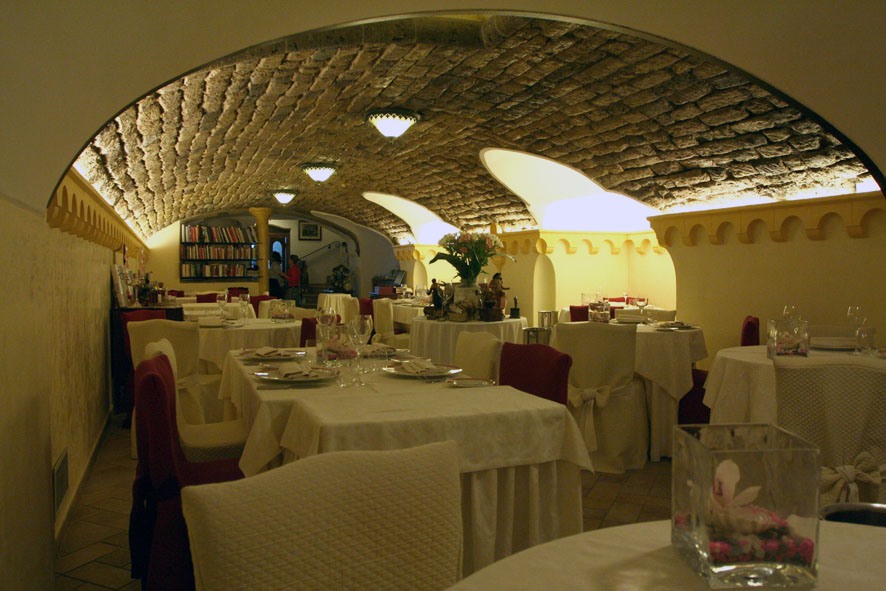 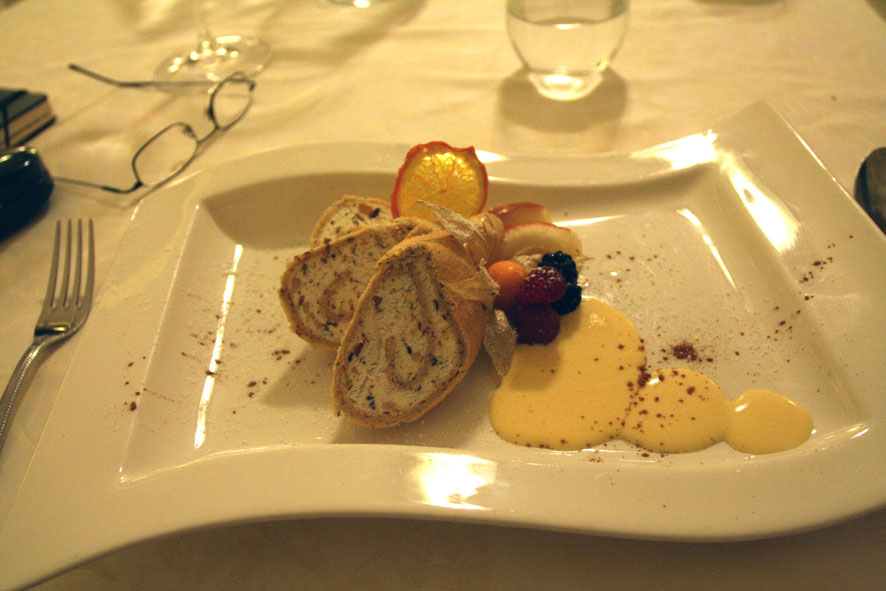 The rain had eased by the time we emerged from our 3 hour lunch. We took the opportunity to buy some more blank DVDs for John’s photos and then headed back to the hotel for the afternoon. 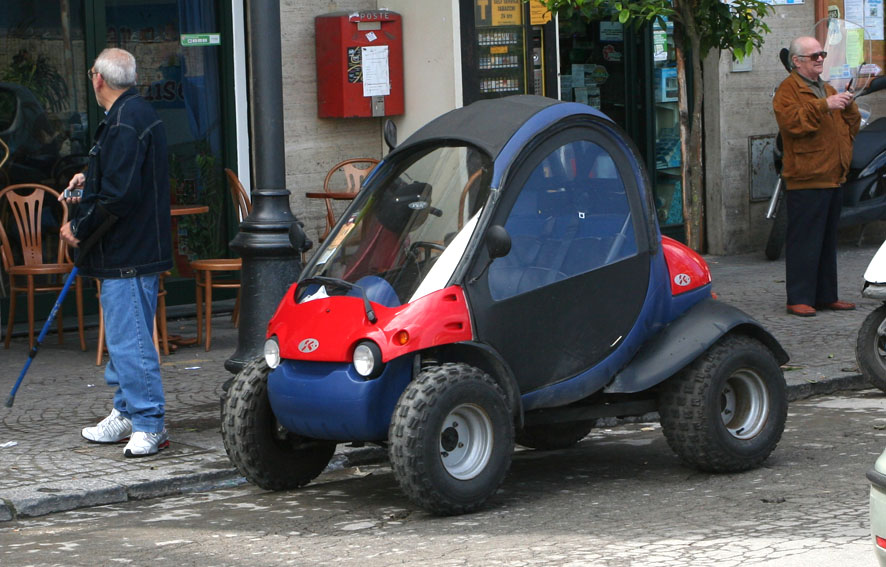 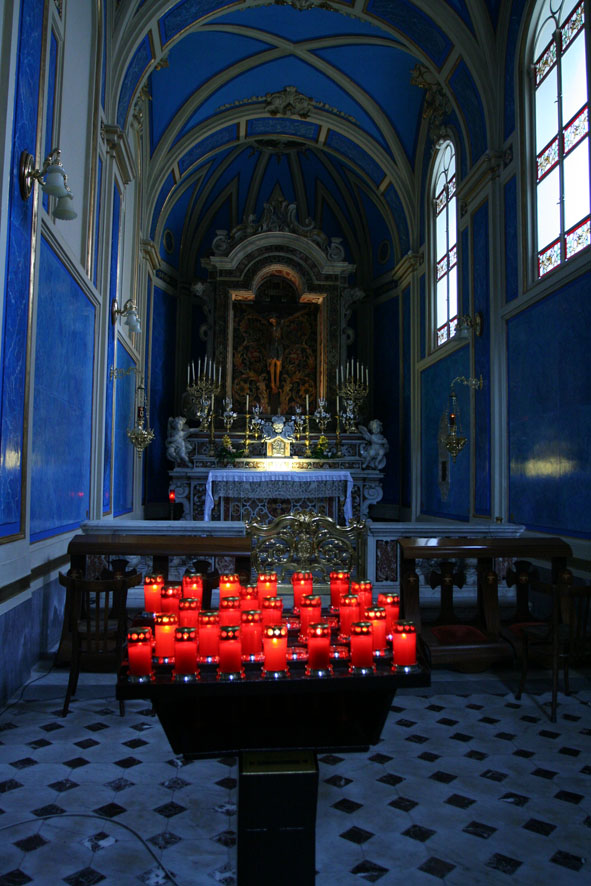 Came back into town for a pizza at Saint Antonio’s which included some fabulous live music – piano accordian, double bass and guitar. Lots of fun (and the pizzas were huge). We then headed to the Teatro Tasso for our evenings entertainment – High School Musical…I mean Sorrento Musical (!!) – and entertaining it was! It told a little story of the history of Sorrento in 4 scenes (which are those things where you have a set change at the end…). The songs were classic Neapolitan folk songs, so we had some great Mario Lanza approximations. There were lots of pretty costumes, posing and dancing. The sound system was fantastic – the Q should borrow their radio mikes, they were brill! Strange imbalance in technical effects – there was surround-sound, literally a speaker every 3 metres – but there were only 6 lights. 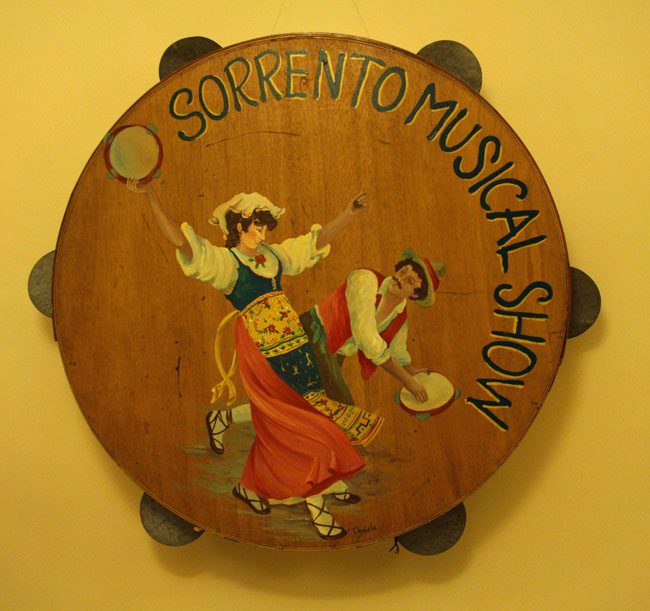 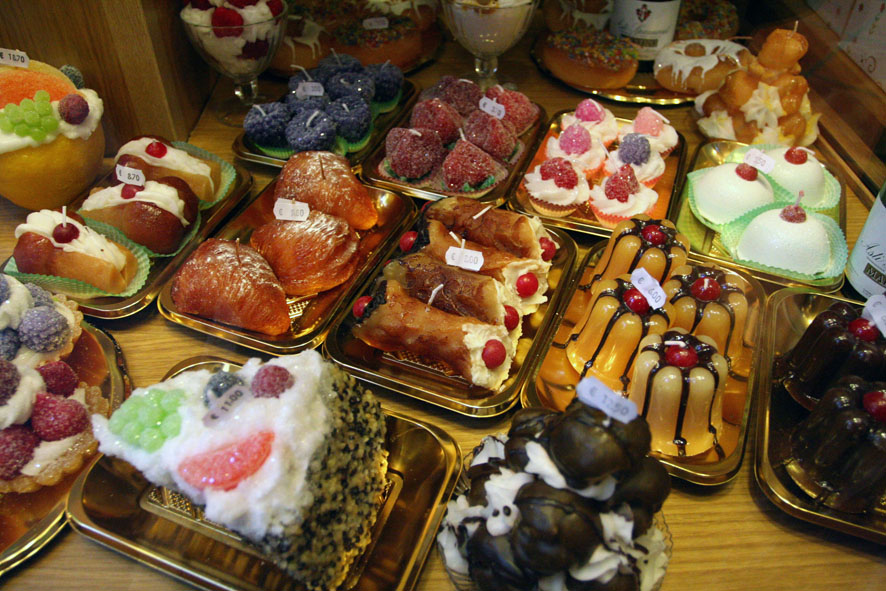 No, NOT another shot of sweeties in a shop window – they are candles!

Was raining again when the show was over so we huddled under an awning waiting for the time to meet our transport (not aware that she came down early so we wouldn’t have to wait so long in the rain). Oh well. 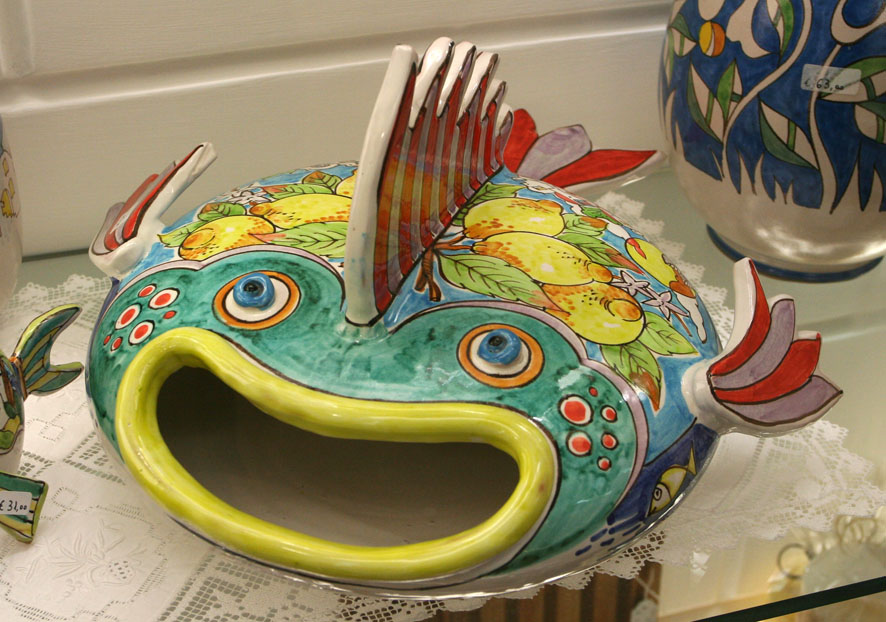 Ugly fish, but what’s it for? Lollies…? 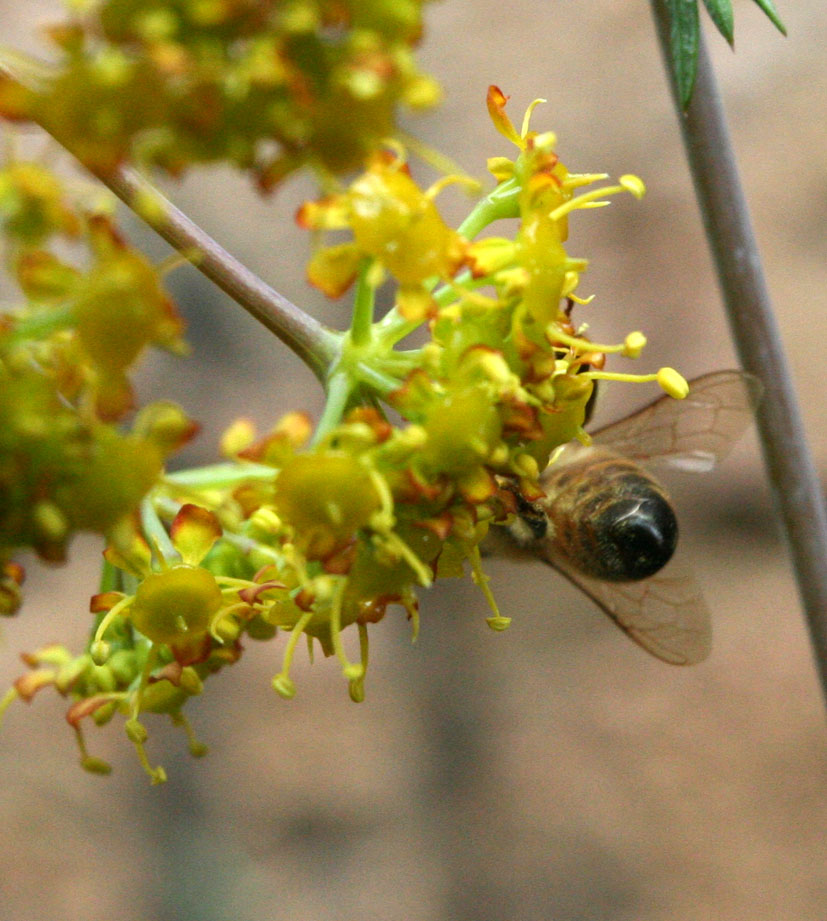 Spent our final day in Sorrento fairly leisurely. John found a barber for a hair cut while Nic went to the market for some picnic provisions. Lunched in the lovely park near the Hotel Continental and talked to dogs and their owners in pathetic Italian. After a final stroll through the old streets and tacky, but oh so interesting tourist shops, we headed one more time up the hill to our Il Nido. Squeezed in a wander to the nearest village church – the one whose bells chime the 6 o’clock matins – and some last minute photos. Ate our last dinner at our hotel restaurant – the most wonderful fillet steak with a gorgonzola sauce with some broccoli in olive oil and lemon juice on the side as well as some baked zucchini and mozzarella (which was fan-bloody-tastic!) – and finished the evening watching more fireworks on the balcony chatting to lovely Canadians and boisterous Aussies. 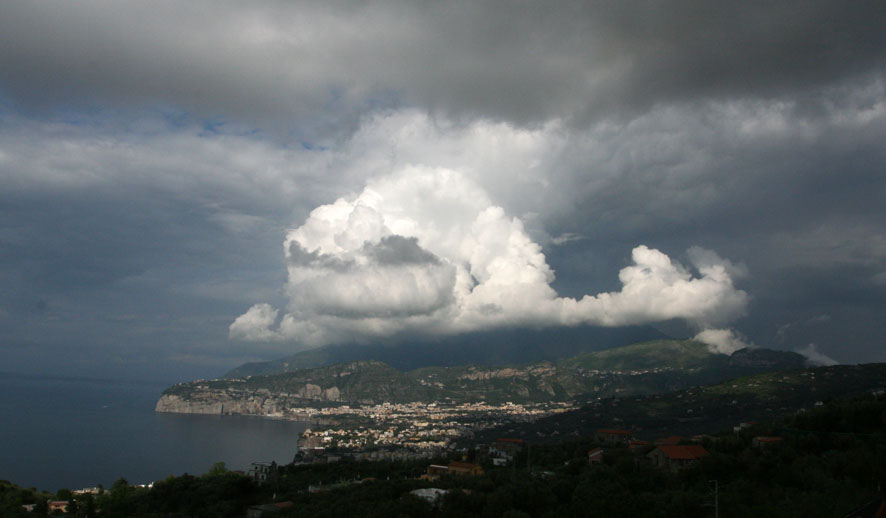 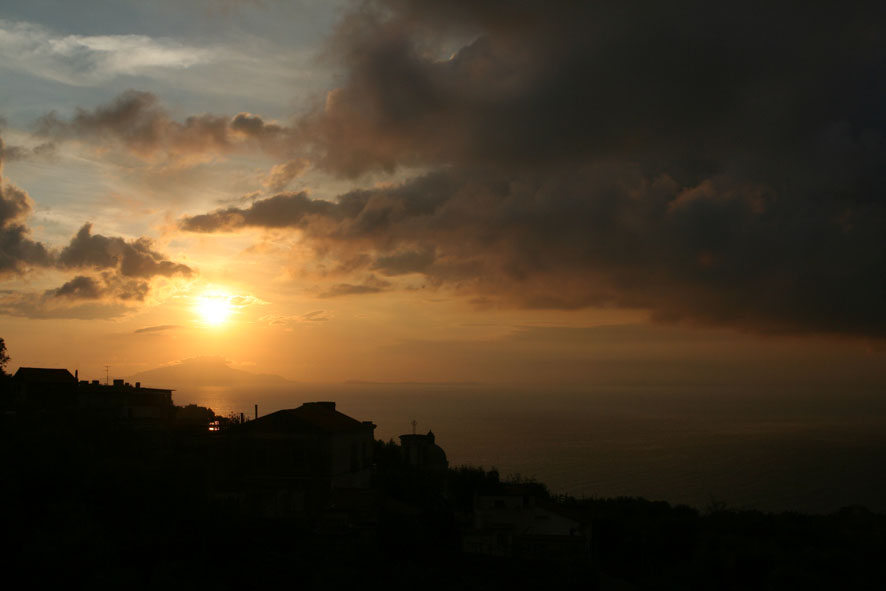 We never tire of these sunsets

One Reply to “Sorrento IV”