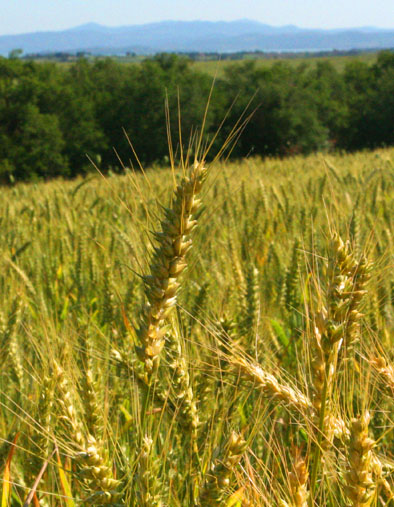 Wheat field on the way to Siena

Bird getting a drink

On our way to Siena we stopped off at Montepulciano and Pienza, yet another two lovely hill towns in Tuscany. The first was one of the two ‘Mont’ towns famous for its wine (the other is Montalcino, but as yet we haven’t managed to get to that one), and Pienza was famous for its pecorino cheese (two of our favourite things!) – oh, it is also famous for Pope Pius II being born there (the town even changed its name to Pienza in honour of him). 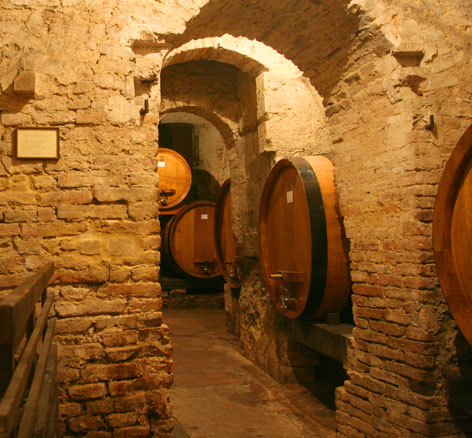 The cellars in Montepulciano

Montepulciano was as gorgeous as all of the hill towns and we indulged in a bit of wine tasting in the cellar of an old palace – very atmospheric. Didn’t purchase any though because it’s difficult when you have to basically carry everything you buy with you and there is only so much one can drink! (And shipping wine home is out of the question when you have to pay a total of 75% in tax!! – 5% GST and 70% WET tax – basically an alcohol tax. It’s obscene!). 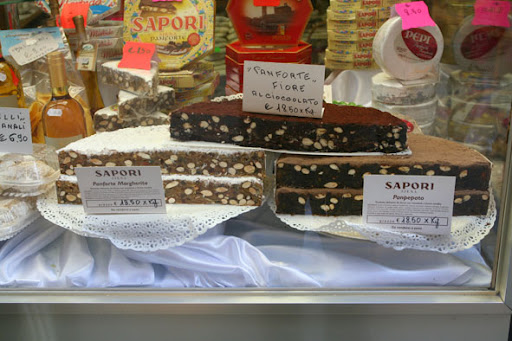 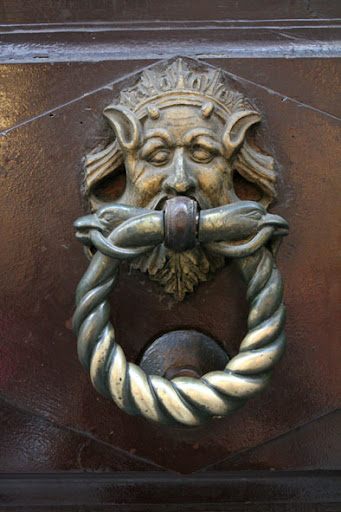 Nice knocker (looks a bit like the dude in Labyrinth) 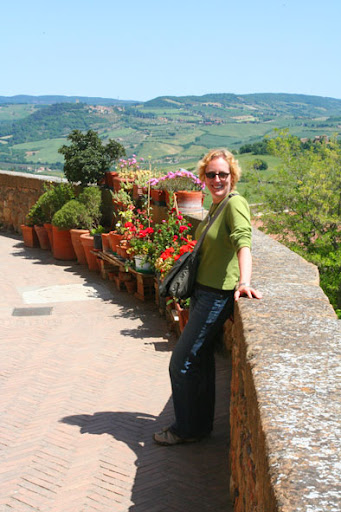 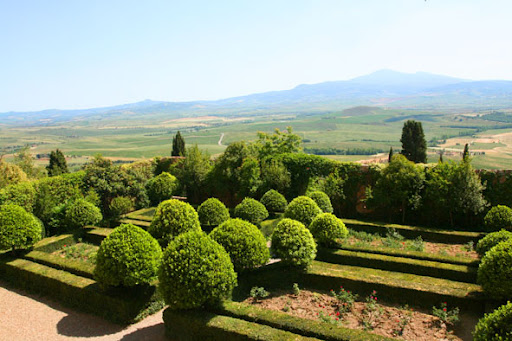 Pope Pius II’s garden, with Tuscany in the distance

Pienza was a particular delight. Apart from being flat (which is a lovely change after all of the hills we have been climbing) there was also the Piccolomini Palace to tour (where Pope Pius II used to live – his family were Piccolominis). It was a wonderful insight into the life of the wealthy in 15th Century Italy. 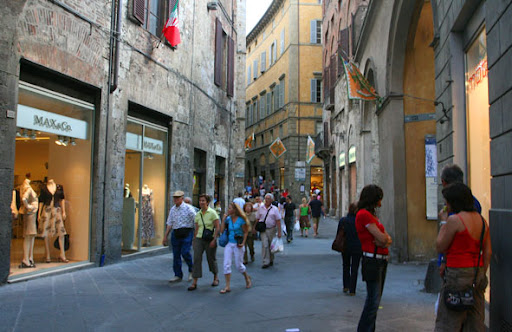 Arriving in Siena was a bit of a dog’s breakfast with the, oh, so fabulous tradition of signposting (or not!) in Italy. Always a joy. We found our fairytale castello on a hill a few kilometres out of Siena. We were staying in one of the towers of the castle (Castello Quattro Torra) which gave us 360 degree views with Siena to the west. It was such an oasis, such a peaceful retreat, basically everything we had hoped it would be. To try and describe the countryside would be not only repeating myself, but a huge cliché. What we saw out of our windows was what every wonderful picture of Tuscany makes us drool over and want to escape here to experience. Perfetto!

Roof of our Castello (and one of the four towers) 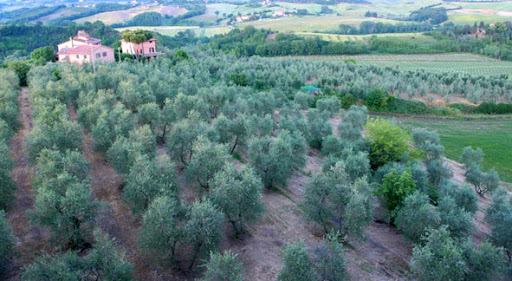 Olive grove next to the Castello 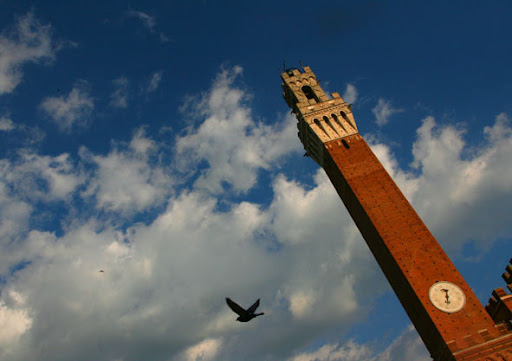 Tower and bird in Il Campo 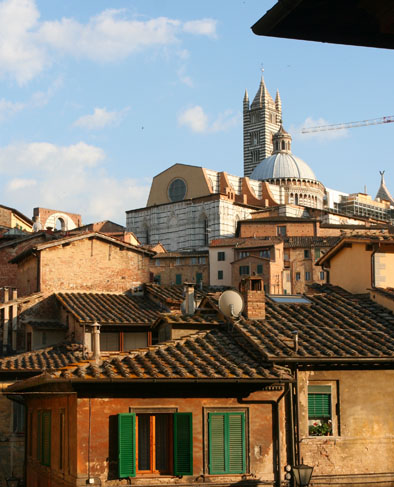 Siena itself is a fun and vibrant town. Lots of uni students combined with the tourists plus the shops that cater to the rich and poor in both groups. Il Campo was a lot of fun to experience of an evening (not so much during the day with the stinking hot temperatures we’ve been having). Lots of people sitting in the middle of the square, talking with friends, kissing with lovers, playing with kids. It was surprising that it still had a small town feel considering its size. Highly recommend this city. 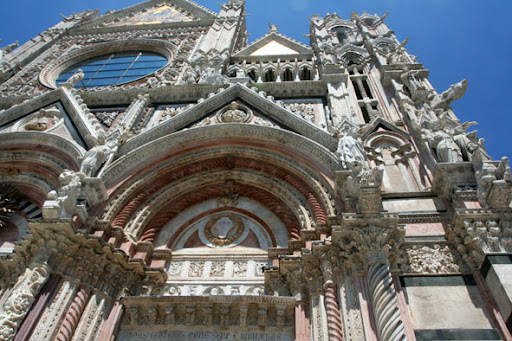 Marble floor inlay of the she-wolf and Romulus and Remus

The Duomo is pretty interesting too, all white and green/black stone stripes, supposedly representing the black and white horses that the sons of Remus (of Romulus and Remus fame) rode to escape their uncle (Romulus) who wanted to murder them. In fleeing to safety they established the town of Siena. Don’t you just love a good legend? Needless to say there are oodles of that famous statue of a she-wolf suckling two human babies everywhere in Siena (as well as in Rome). 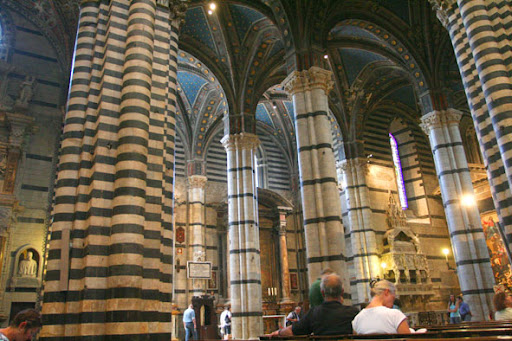 Illumination – check out those naughty flogging cherubs! Glad to see those monks had a sense of humour 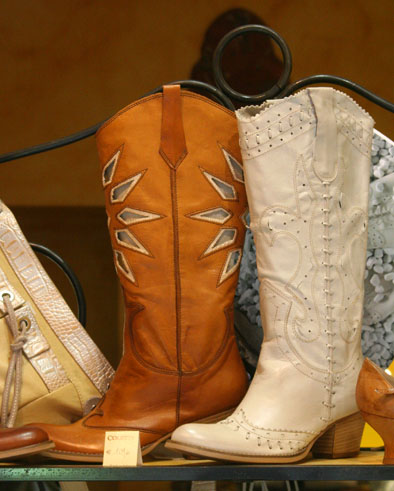 Boots made for gawking

On our last full day in the Siena area we got in the car and explored the area west of the city. Obviously we hadn’t had our fill of Tuscan hill towns! Went to San Gimignano first and found it to be incredibly geared to tourists, even more so than Cortona (if that is possible!) We climbed to the highest point in the town and admired the 14 remaining towers of the city (out of an original 60) and then moved on after buying some pretty postcards.

Morning at the castello

John in the main square of San Gimignano

Volterra was the next stop and it was just lovely. It had the beauty of San Gimignano without the pandering to the tourist dollar. It is the home of alabaster, which made for some very enjoyable window-shopping and some present purchasing. Had lunch under some ancient trees in a not too busy piazza at a charming restaurant. They almost treated us like Italians rather than tourists by not rushing us through our meal and letting us savour the afternoon in the shade with our bottle of local dry, crisp and very cool white wine. Delizioso. 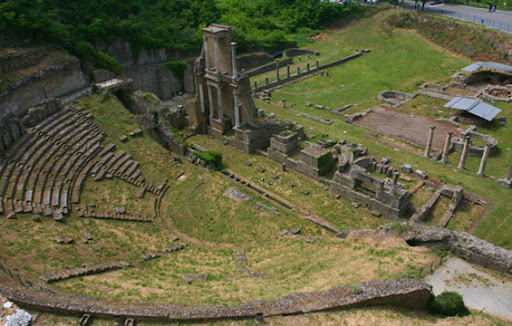 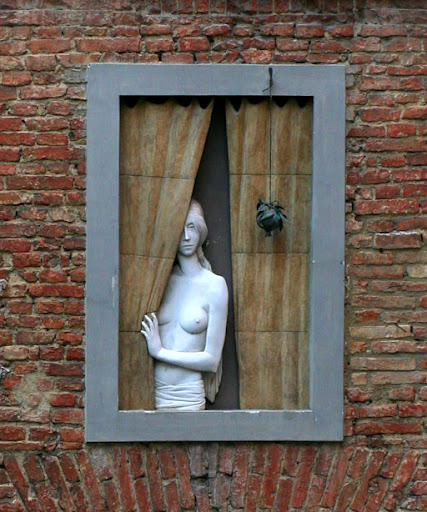 Nic in the forecourt of the castello 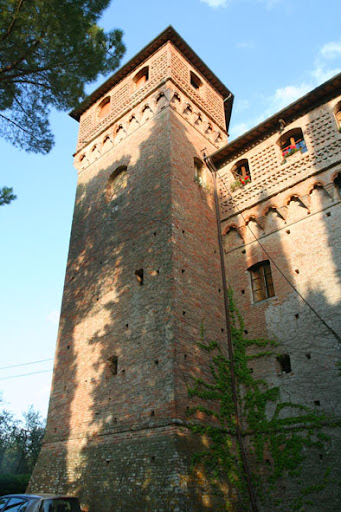 Our bedroom was the top floor of this tower

Had one of the most fantastic dishes of our travels on our last night in Siena. We went to a restaurant recommended by our host called L’Osteria and had cinghiale in dolce e forte – ‘sweet and strong’ wild boar! To die for – the tenderest of meats in dark brown gravy with pine nuts and almonds, but the key ingredient was the subtle taste of chocolate!! Absolutely heaven!

Our castello from the paddock 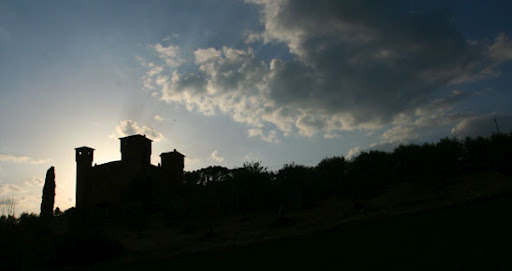