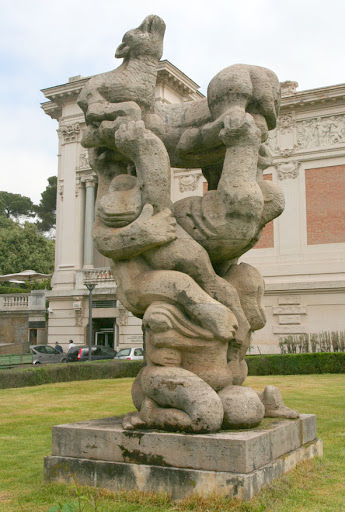 So much to see and four full days really is so little time. Going great guns though. Took off to the Vatican to do the museum only to blanch when we saw the line. It was about four blocks long, probably about a 2 hour wait time (it took us nearly 10 minutes to walk from the beginning of it to the end, briskly!). So much for everyone’s advice to ‘get there early’ – EVERYONE does that. We threw that idea away immediately and hopped on a waiting tram that dropped us outside the door of the National Museum of Contemporary Art. Perfect.

Spent a delightful 2 hours wandering the very uncrowded halls and enjoyed every second. Some more magnificent sculpture to wonder at, mouths agape, as well as some thrillingly beautiful oil paintings. Also delightful to see the small groups of school children in every room sitting on the floor with their teachers and, we guess, some uni art students, creating their own art with a variety of media. Those types of school excursions were a lovely spectacle, unlike the surprisingly many that had high school students dragging away on their cigarettes along with the teachers. Yuk! 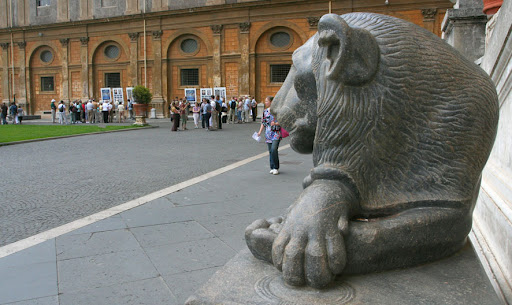 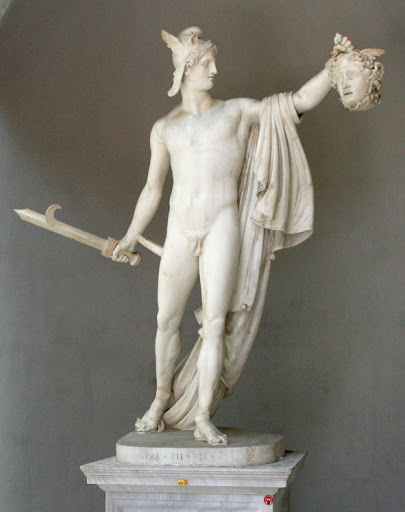 While John in his rush labelled this photo ‘Guy with head’, it’s actually Perseus triumphant over Medusa 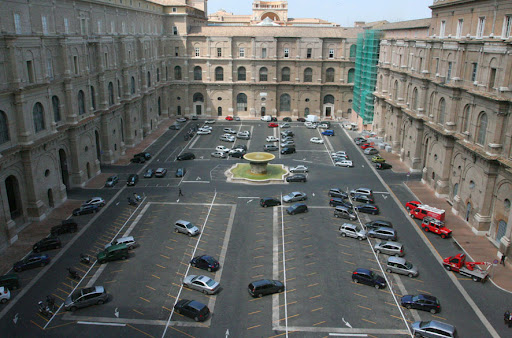 Decided to go back to the Vatican Museum at lunch time with the theory that the tour groups and all those other people we saw in line in the morning would have to stop for lunch. Brilliant idea. Worked like a charm, absolutely no line, no waiting. Walked straight in the door, through security up the stairs to the ticket booth and whoo-hoo, through the door! 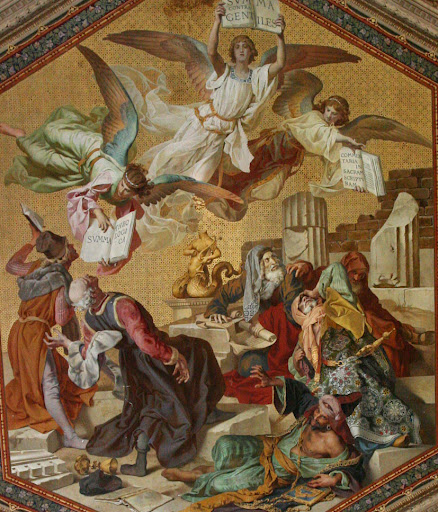 What an abundance of art! In fact, too much. What began as a ‘mouths agape’ slow stroll became, after the Sistine Chapel, a tired stumble through the remaining halls, only glancing at the work around us – overload, a gluttony of art, artistic indigestion! 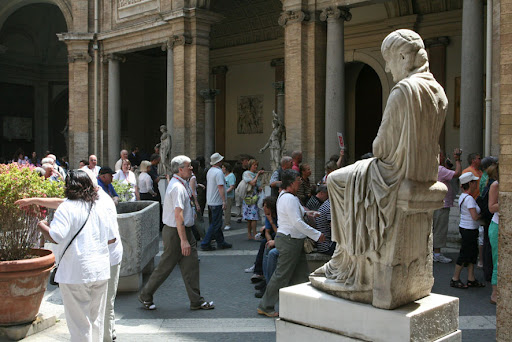 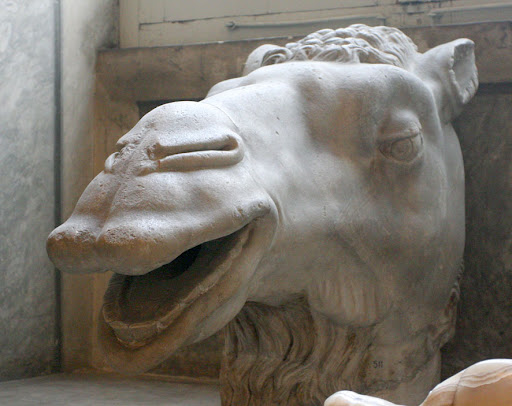 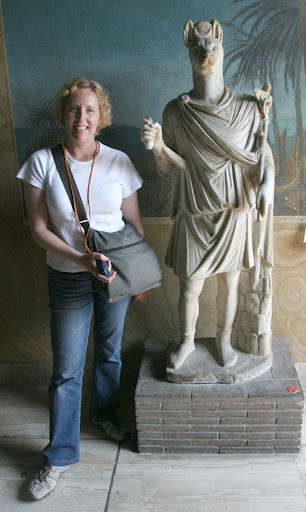 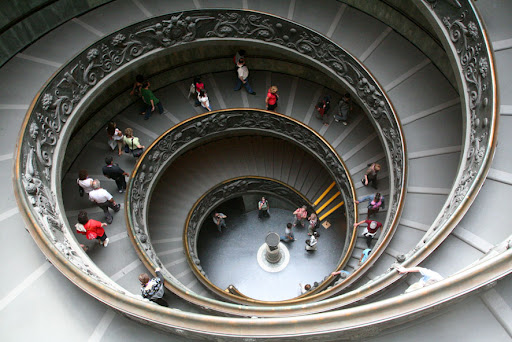 Had a relaxing evening at the B&B. Grabbed some take away pizza and some wine and sat on the terrace half watching the world news. Then caught up on photos and blogs and chatted to some friendly young Americans about our mutual love of Bernini’s work (and they pointed us in the direction of some in Rome that we hadn’t yet seen). 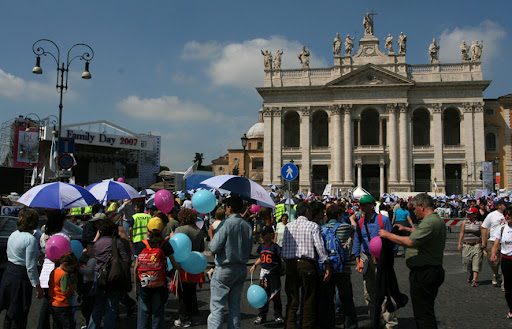 Crowds with umbrellas at San Giovanni 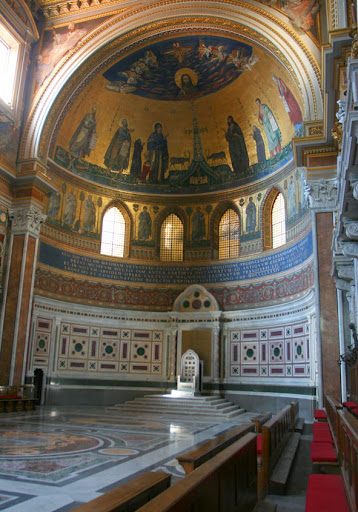 Inside the stunning cathedral

Our final day in Rome was actually a very relaxing one. We began with a walk to San Giovanni. Got a shock when we left our B&B – there were literally thousands of people (which grew to hundreds of thousands throughout the day, some news reports said 1 million!) crowding the street. It was National Family Day, but the addition to a nice day out for parents and kids was the extreme political right with their protests about ‘traditional values’ and ‘no rights for unmarried couples’ stuff. Of course, these political groups have the financial backing and support of the church – supplying free hats, umbrellas and drinks to that many people isn’t cheap! We elbowed our way through this gathering to get into the church, San Giovanni in Laterano, which immediately became our favourite church in Rome. Not only was it magnificent and beautiful, it had a lovely welcoming feeling to it with friendly smiling nuns about the place nodding greetings. The side entrance added to its ‘approachable’ feel. There was still the grandeur in the artwork and decoration, but it somehow had a ‘church for the people’ feel. Ironic really, considering that once, after the Pope’s official residence was no longer Avignon and he moved to Italy, San Giovanni was his abode. So it’s not exactly a little chapel, it’s just wonderful. We particularly liked the statuary – the huge 12 apostles gracing the large central aisle were stunning (school of Bernini, of course!) 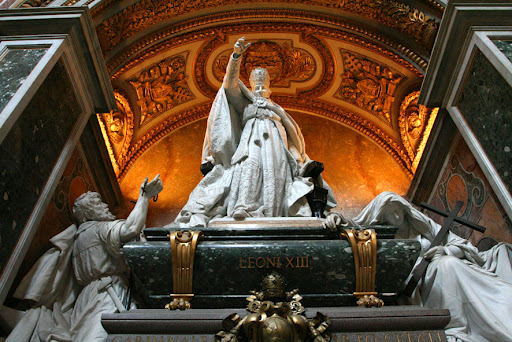 A dead pope – can’t remember which one! 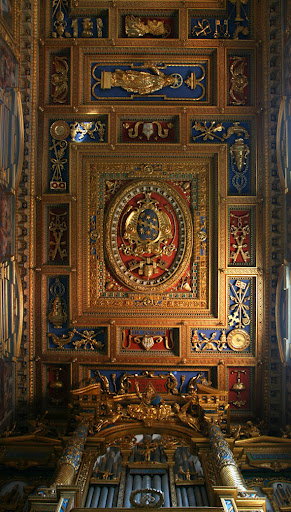 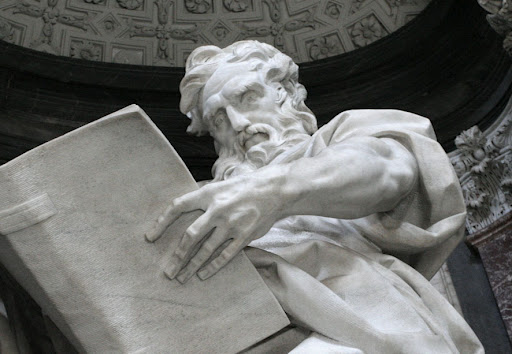 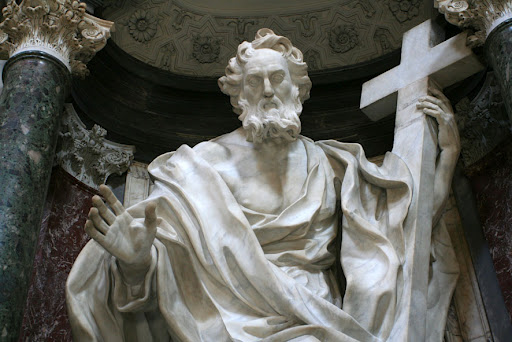 We bussed our way to Piazza del Popolo and saw a really cool display of police vehicles, including helicopter and Lamborghini (!) in celebration of 155 years of the police force (we think). Lots of kids having their photos taken with sexy young police officers, male and female. 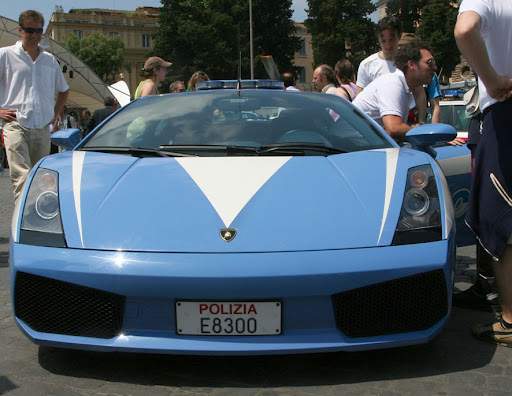 Had some lunch at a little ristorante in a side street before going window-shopping and making our way back to Piazza Navona to have some ‘death by chocolate’ tartuffo ice-cream dessert – a huge ball of dark, dark chocolate ice-cream rolled in flaky chocolate chunks with a soft chewy fudge centre topped with whipped cream and a wafer. Oh, life’s tough! 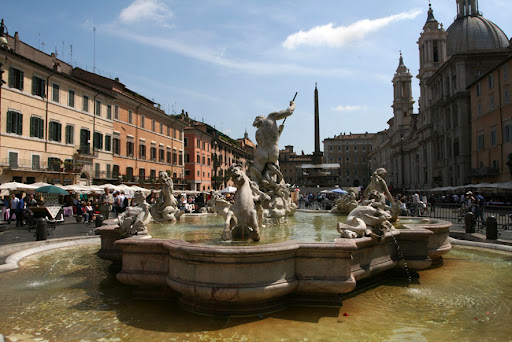 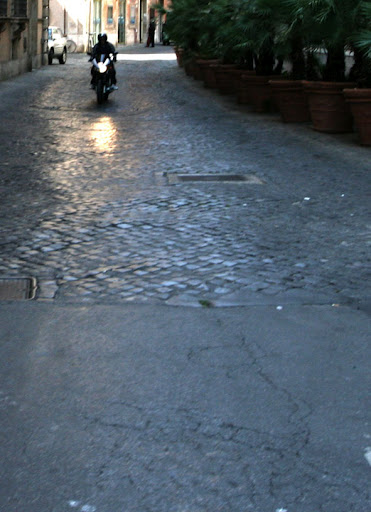 Motorcyclist – a change from bicyclist!

Wound our way through more areas of Rome new to us near the Piazza della Repubblica to find another beautiful church (they really are everywhere) with another Bernini sculpture – ‘The Ecstasy of St Theresa’ (*sigh*). 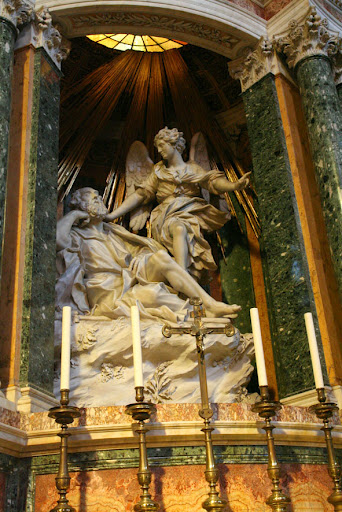 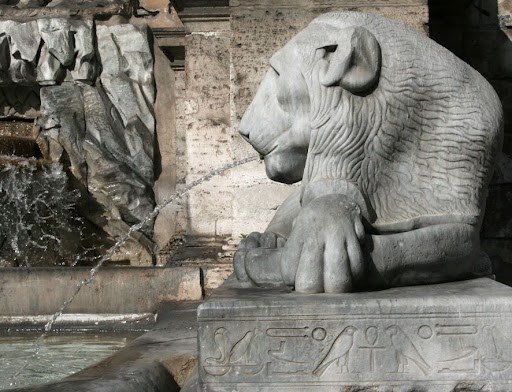 Take that, you fiend!

Crowds STILL out and about on Family Day

Got on the metro at Repubblica and were surprised to find the train a little crowded (even doing our trick of getting on the first or last carriage didn’t work for more space). Were even more surprised when the next station’s platform was packed and no one was able to get on the train. The next station the train didn’t even stop. Bit of a big response to family day, we thought (not realising the extent of the rallying going on above ground – it made the BBC world news). When we made our way out of the metro station, we saw that they were not letting people down there at all (our stop was one away from where all the action was happening at San Giovanni). Pushed our way into a supermarket for some freshly roasted pork and veges to heat for dinner, as well as a bottle of local wine (SO easy being able to purchase the grog at supermarkets – so civilised!). 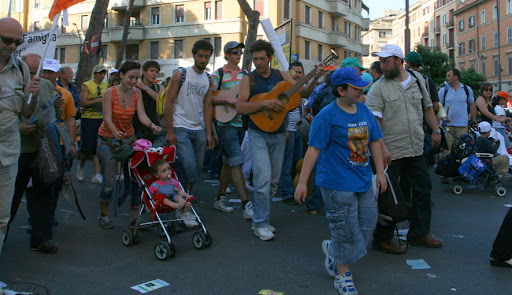 Families partying on (courtesy of the Catholic Church)

Went back to our B&B and hung out with the other Aussie couple to watch Eurovision. Now the really stupid thing about Italy and Eurovision is that they don’t go in it! This means that it wasn’t even telecast in Italy (only in the 42 participating countries!) – we had to huddle around the computer in the communal lounge watching a live stream of the telecast. Anyway, lots of fun was had by all, with plenty of booing at the pathetic, cheering at the cheese, and making impressed and surprised ‘mmm’ noises when someone with talent performed. 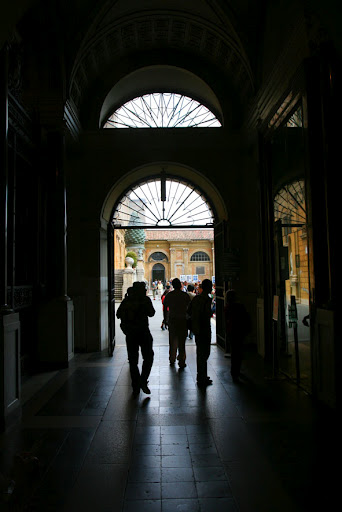