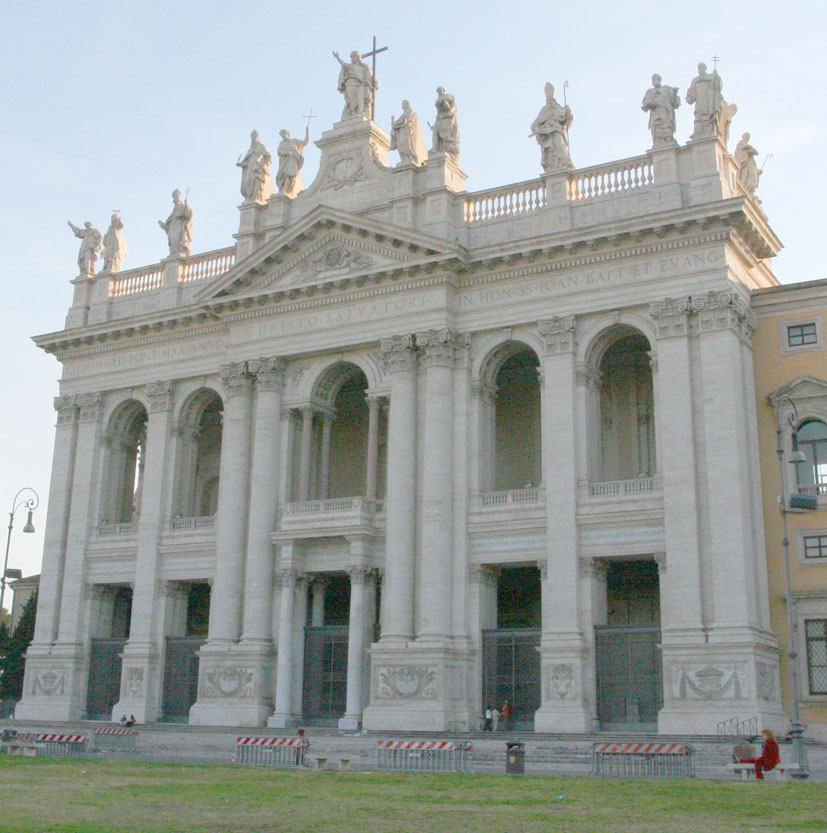 Well, we could be in danger of loving Rome as much as we love Paris! We are staying a little bit out of the action in a B&B that we found on a hostel web site (about a km from the Colosseum just outside of the old city walls, and very reasonable for Rome – which is so expensive for accommodation). It’s called the ‘Alice in Wonderland B&B’ (can you believe it?). The hosts are lovely and we haven’t gone wrong eating at any of their recommendations – real food for locals, not tourists. 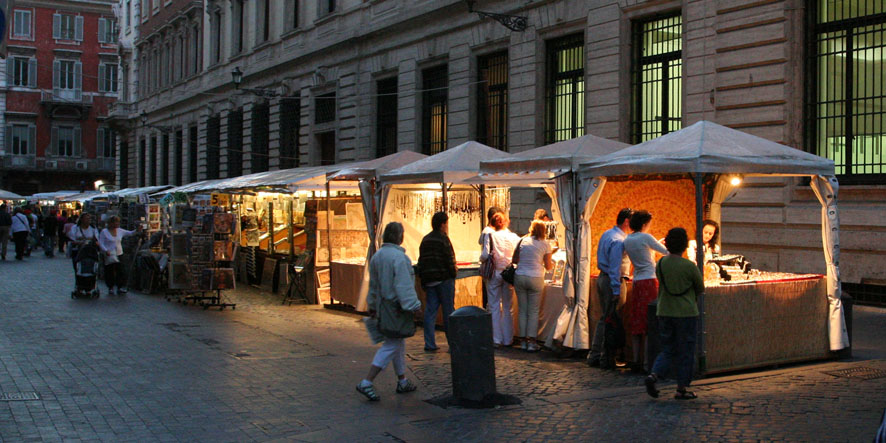 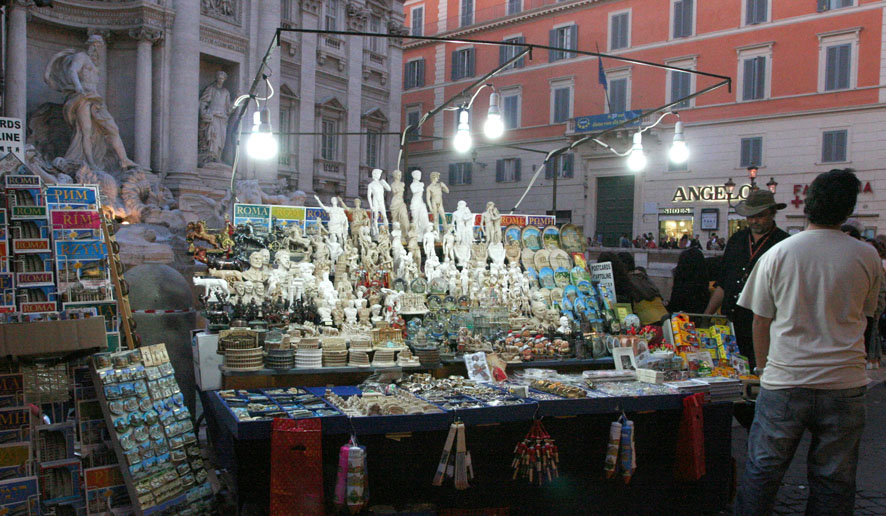 Buy your own statue

We arrived in the early afternoon and immediately dealt with the lunch issue. The most amazing seafood fettucine was had at a local joint near our B&B. Scrummy. Collapsed after that in our room for a sleep and then went out to explore Rome. Walked quite a bit that evening (had a humungous lunch to work off!) – passed the Colosseum, the Trevi Fountain and ended up at the Spanish Steps – quite a bit of walking, actually. Started to get the shits with the flower sellers at the Spanish steps, nearly shoved those damned roses somewhere very nasty indeed. Thorns included, thank you! 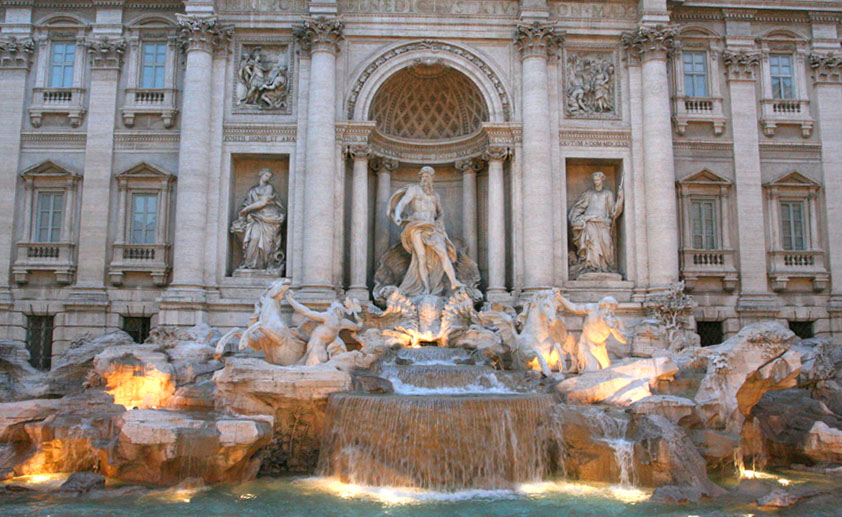 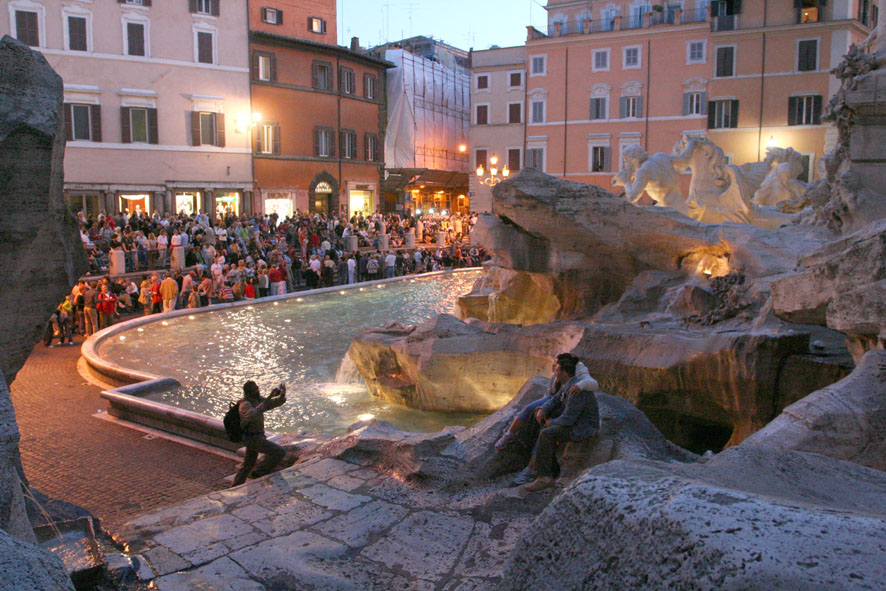 This is the Trevi without crowds…

View of the Spanish Steps…

…View from the Spanish Steps 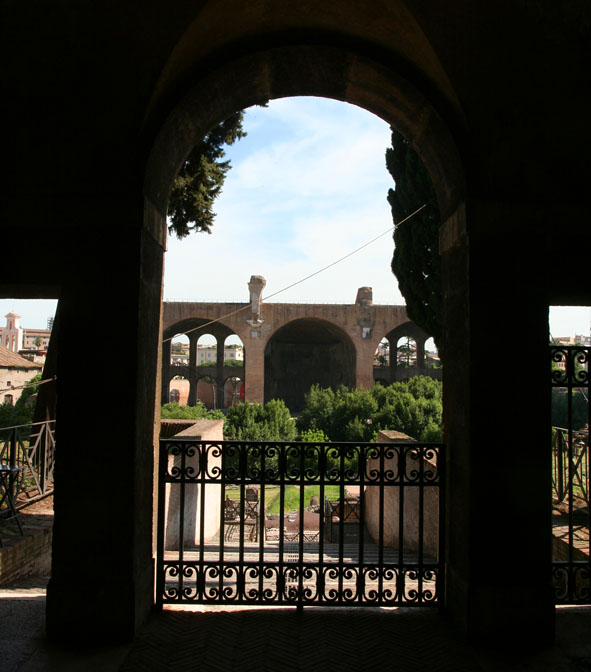 Got off to an early start and did Palatine Hill and the Roman Forum. These were fantastic. If we had it to do over again, we would reverse the order of these two and get the tour guide for Palatine Hill (don’t normally do that) cause there was so much we wanted to know about the sight and there were no audio guides or printed material or anything! We still got a lot out of it though. Absolutely unbelievable the scale of EVERYTHING from Ancient Rome. From the ruins on Palatine Hill you can imagine the size of the many palaces that once stood on this site, and it was many. It seems that every emperor built their own palace. Not at all satisfied with what the previous bloke used! 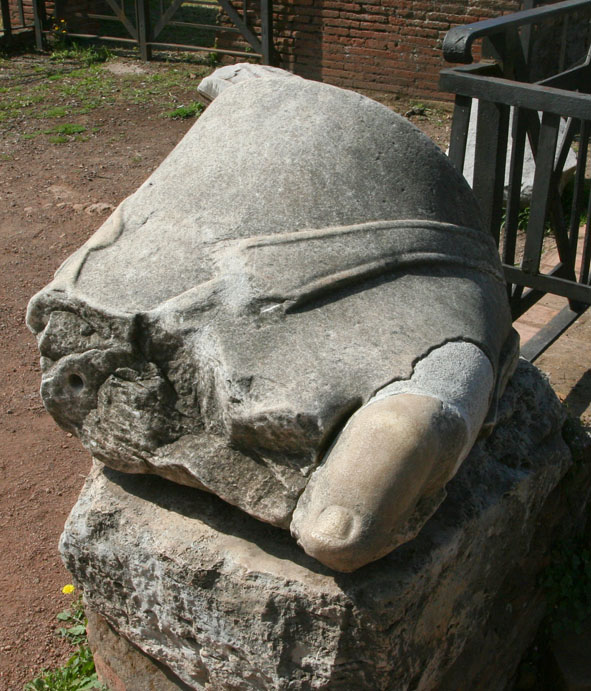 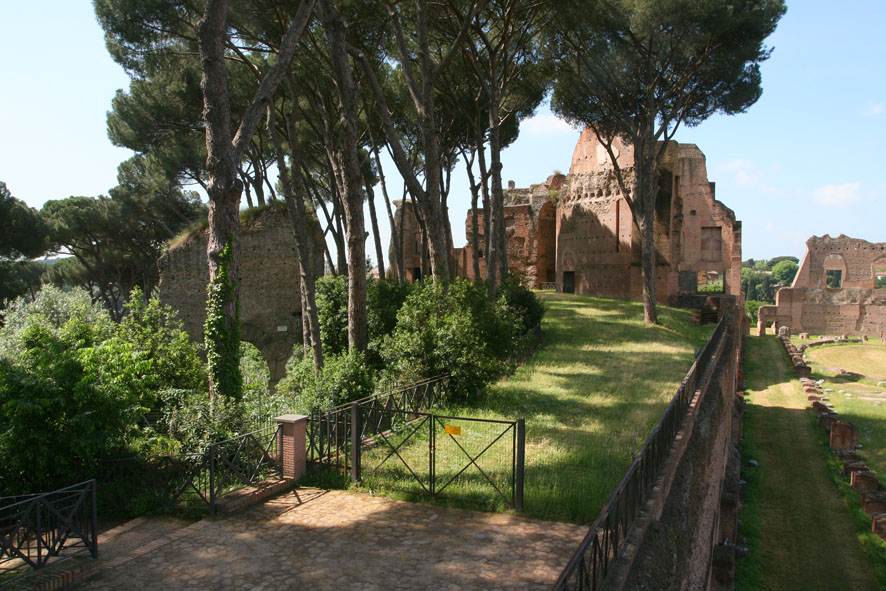 The Forum was remarkable. Again, the sheer scale was staggering. It’s amazing to think that all of the ruins were underground until the 1700s. Stood where Mark Antony delivered the funeral speech for Caesar and checked out where the Vestal Virgins lived. Not a bad gig if you didn’t mind being celibate for 30 years – came with other perks though, like the best seats at the theatre and your own carriage, and you were allowed to retire and get married once you turned 40! The ones who didn’t succeed in staying chaste were buried alive. Bugger. 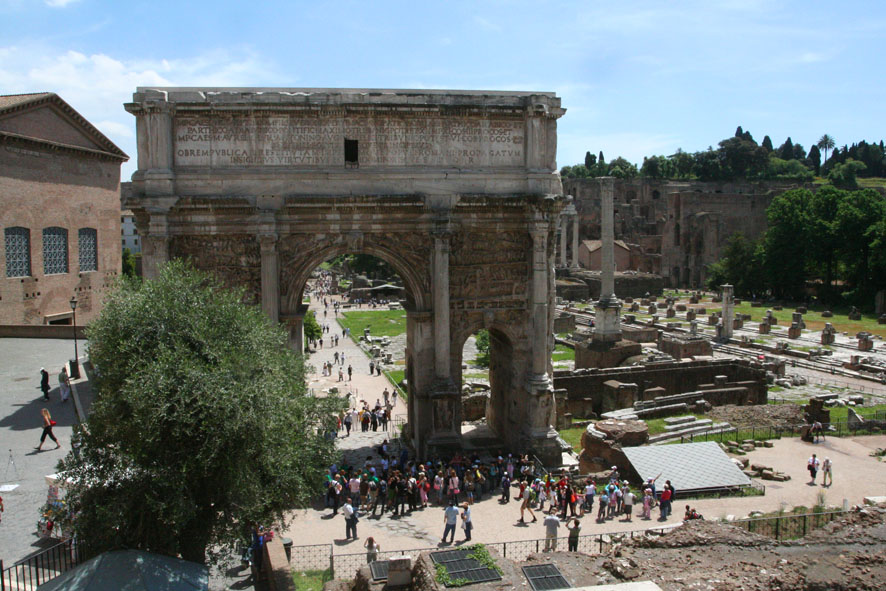 The late afternoon was spent at the Colosseum (AFTER most of the crowds had gone). Fascinated by the elevator shafts and nooks and crannies under the arena floor where they’d shoot up some wild beast to eat the gladiator (he never knew from where or what was coming up to get him!). 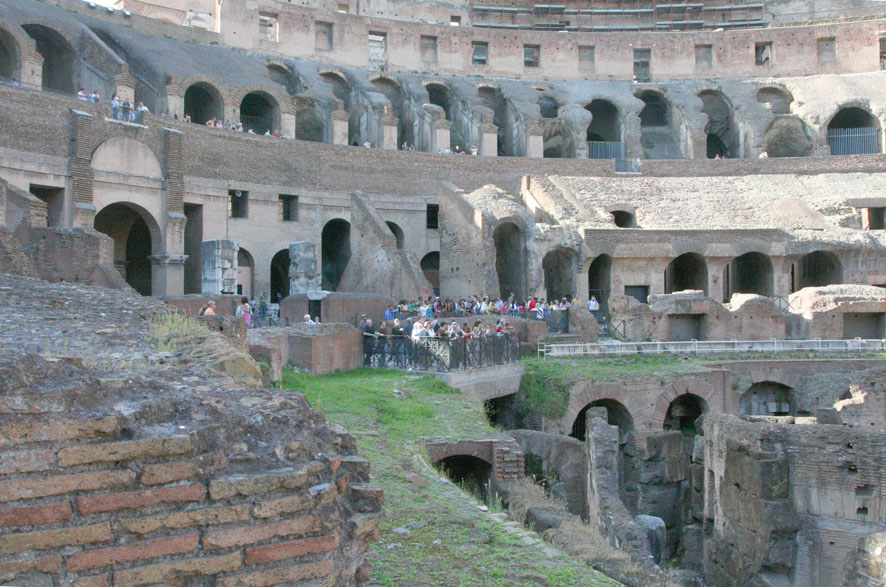 The excavated arena floor (and a whole bunch of tourists) 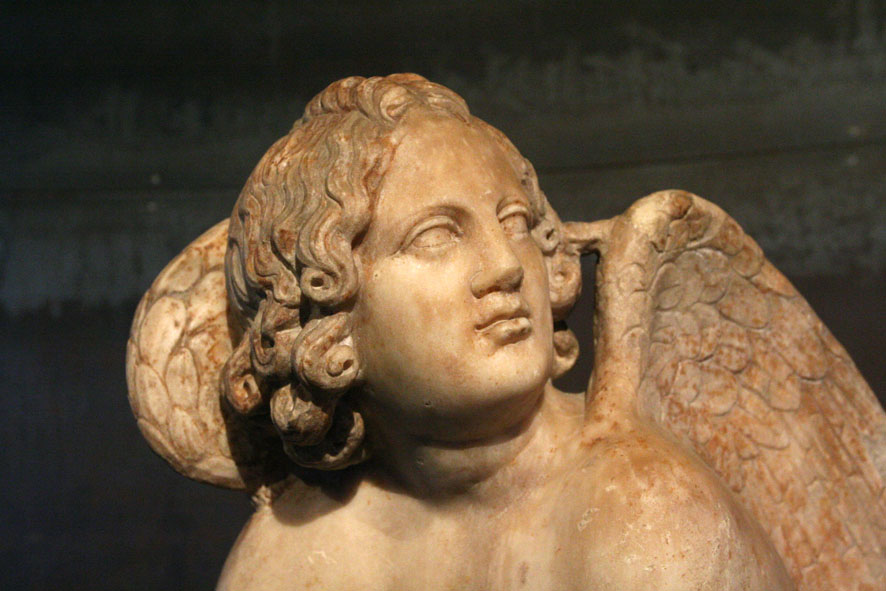 Part of the ‘Eros’ exhibition at the Colosseum 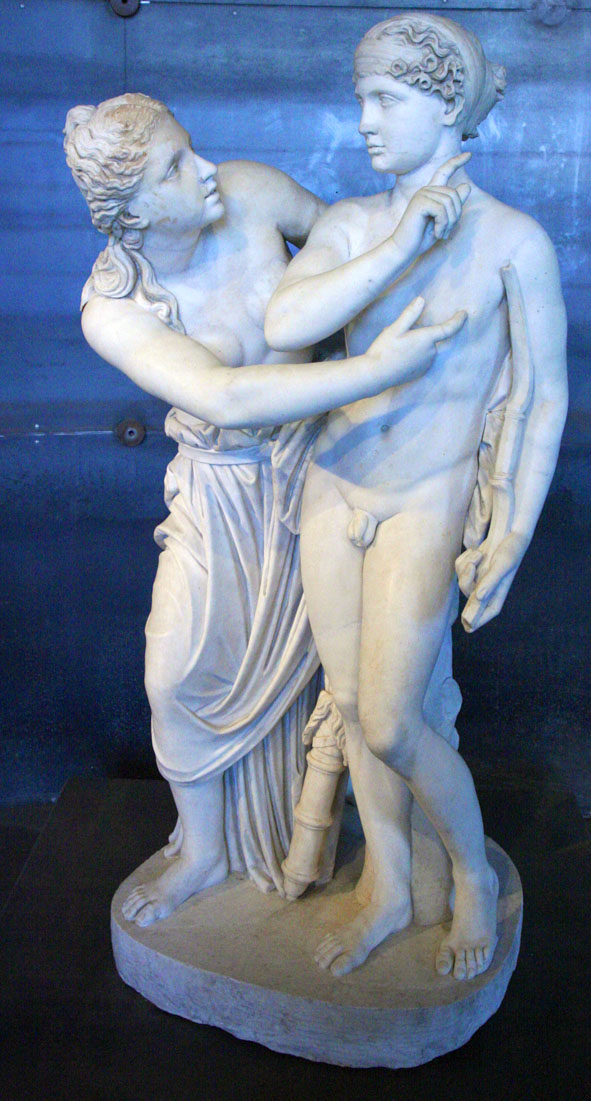 Was Eros into nipple cripples?

Went to the Pantheon after this, which was a particular highlight, truly beautiful in so many ways. Had some fabulous gelati near there from Gelateria della Palma. VERY interesting flavours, and such a range! From there we wandered until we found our way to the Piazza Navona – a lovely place to spend the evening. There were street musicians, artists and the usual souvenir sellers. Very lively and fun. 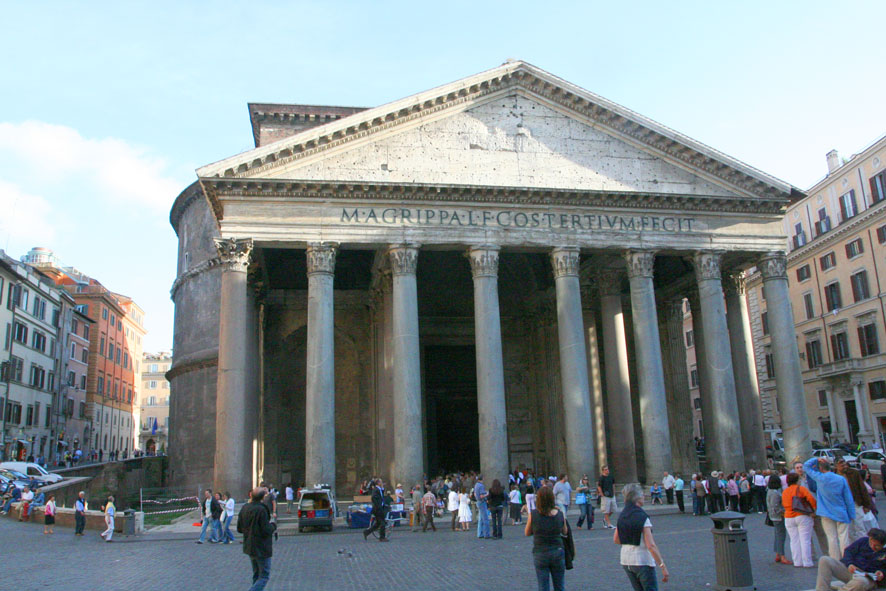 The next morning we got off to a late start due to a well-deserved sleep in and lots of chatting over breakfast with other Aussies. Our first stop today was St Peter’s Basilica in Vatican City – biggest, richest and most beautiful church in the world. Six acres, yes, SIX ACRES of marble, mosaics and sculptures. The place holds 95,000 people for worship! It’s just huge! We didn’t climb the dome or do the Vatican museum because we had reservations at the Borghese Gallery, but we will return to Vatican City before our stay in Rome is over. 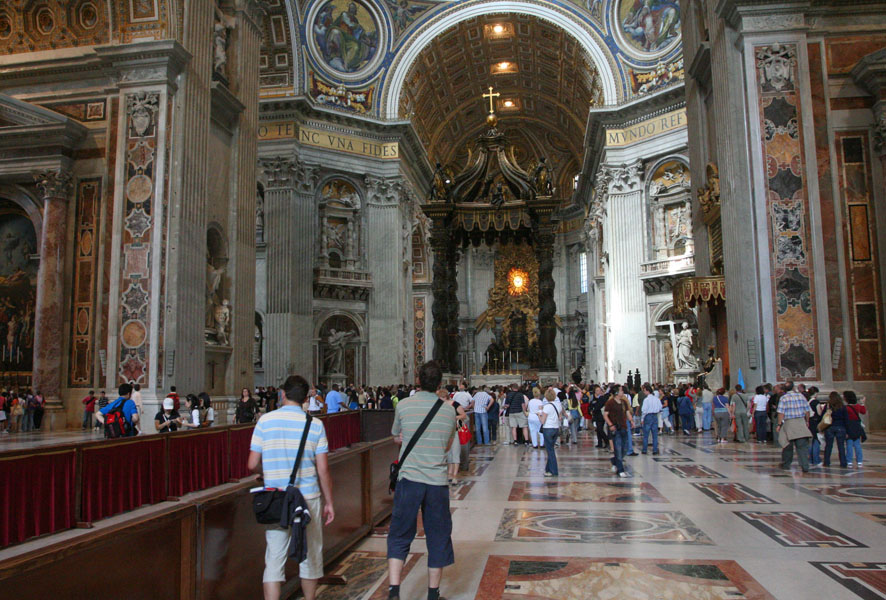 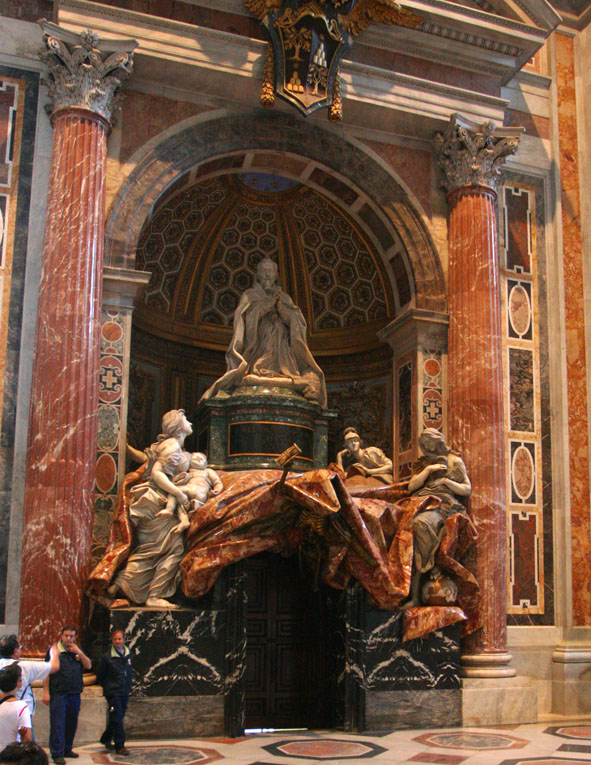 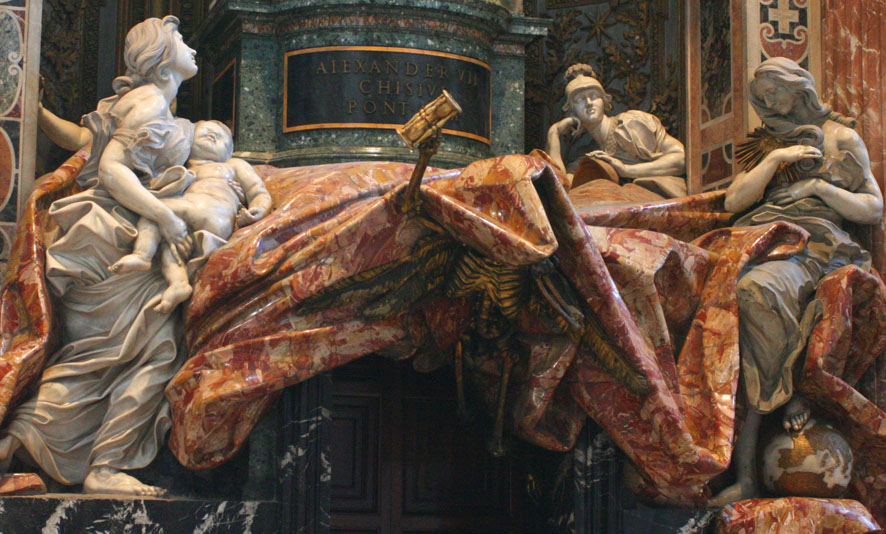 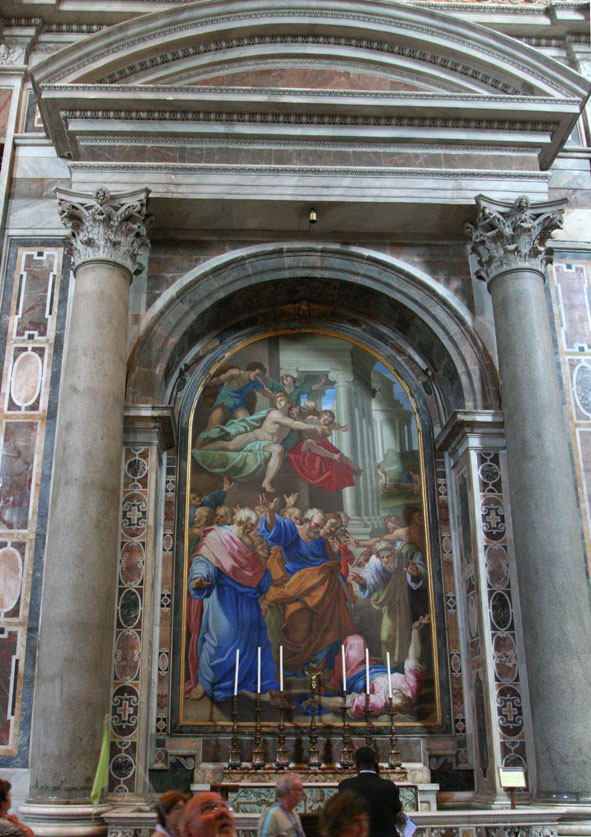 Close up of mosaic masquerading as a painting 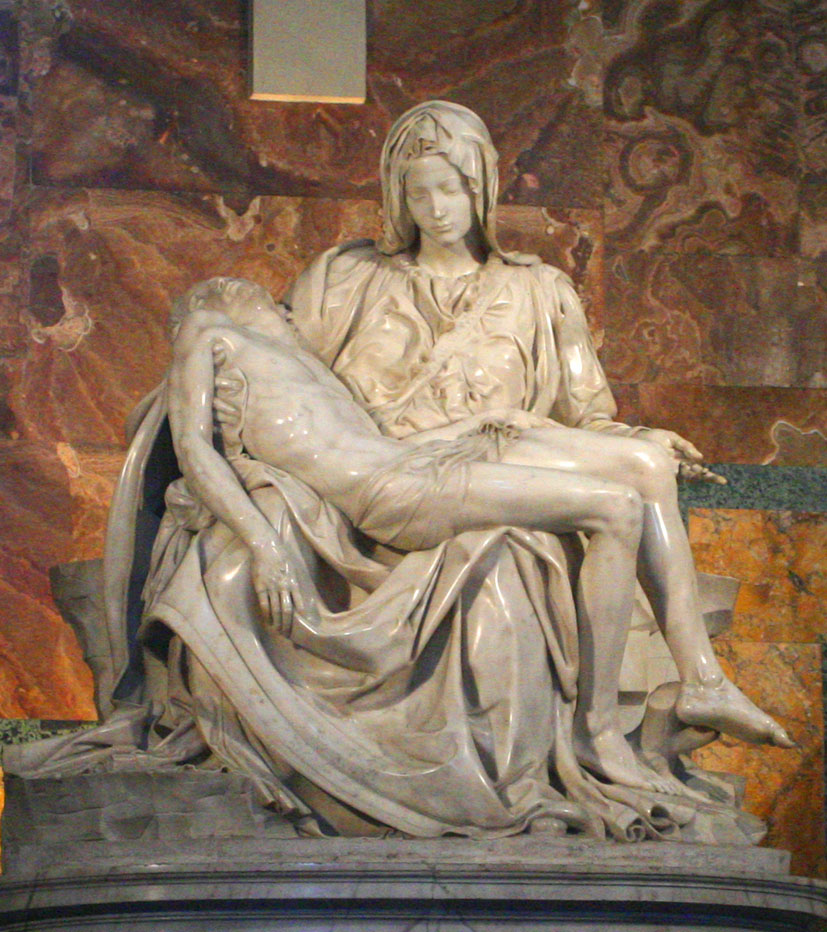 Michelangelo’s Pieta, he did this when he was 23!! 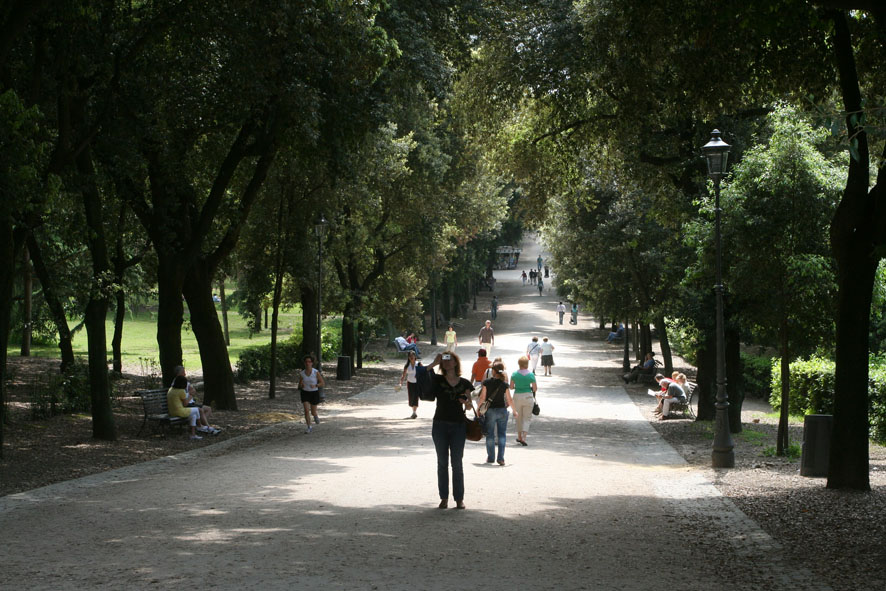 Tourist taking a picture of the Gallery…

The Borghese Gallery was reached via a delightful walk through Rome’s version of Central Park; the Villa Borghese. Needed a reservation for this one so were glad we arranged that beforehand – only 360 people allowed in every 2 hours. The most wonderful thing about this gallery was the work by Gian Lorenzo Bernini. His sculptures ‘Apollo and Daphne’ and ‘The Rape of Proserpine’ were unlike anything we had ever seen before. They seemed made of wax and air, not marble. You could see the young flesh of Prosperine bruising under the violent grasp of Neptune, and Daphne’s toes sprouted twigs as she transformed into a tree just as Apollo reached for her. At least she was saved from the whim of her brutish pursuer, unlike poor Prosperine. 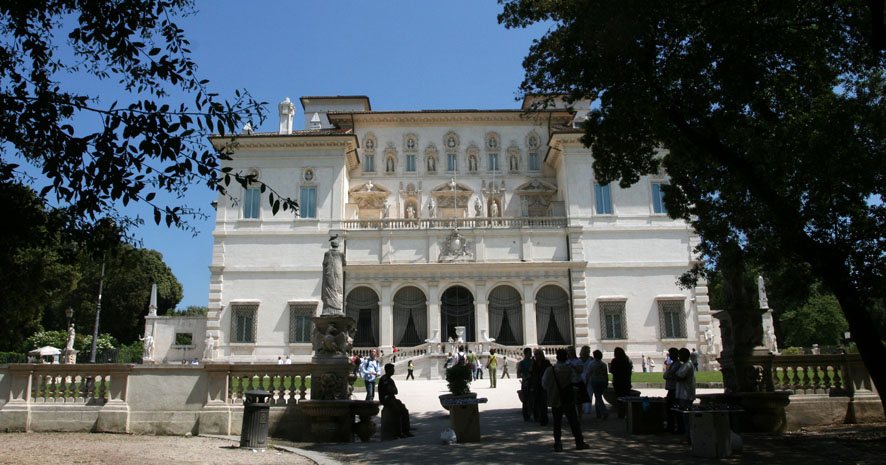 Staggered back to our digs for a nap after so much walking. Rested, and having had chocolate for energy, we once more set out to the trendy Trastevere area (medieval-village Rome buildings). Then went to Campo de Fiori for dinner at another recommended restaurant from our host. Still not disappointed. We are sure to manage to fit in all of his suggestions before we leave on Sunday. 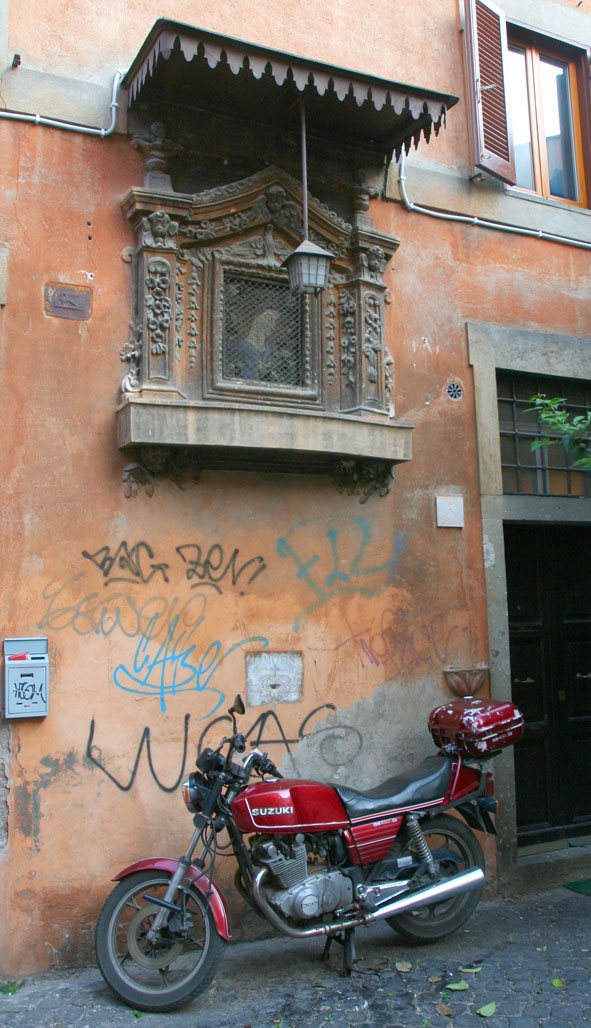 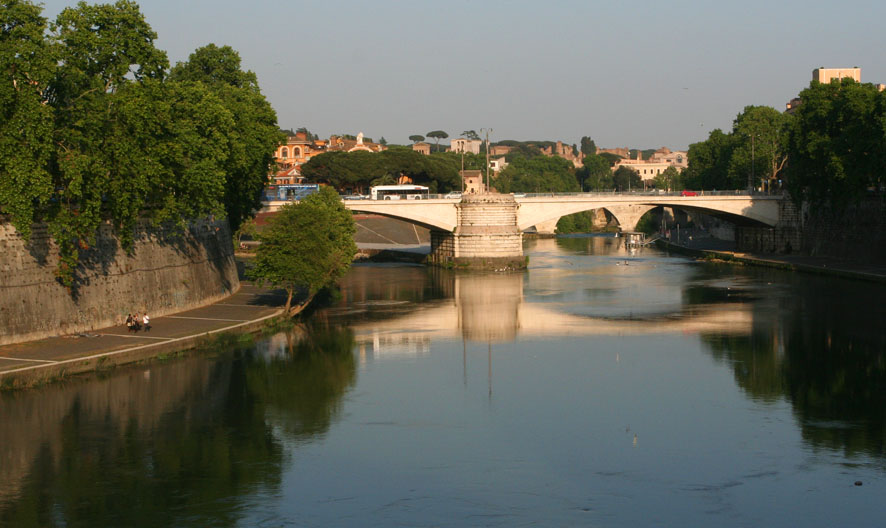