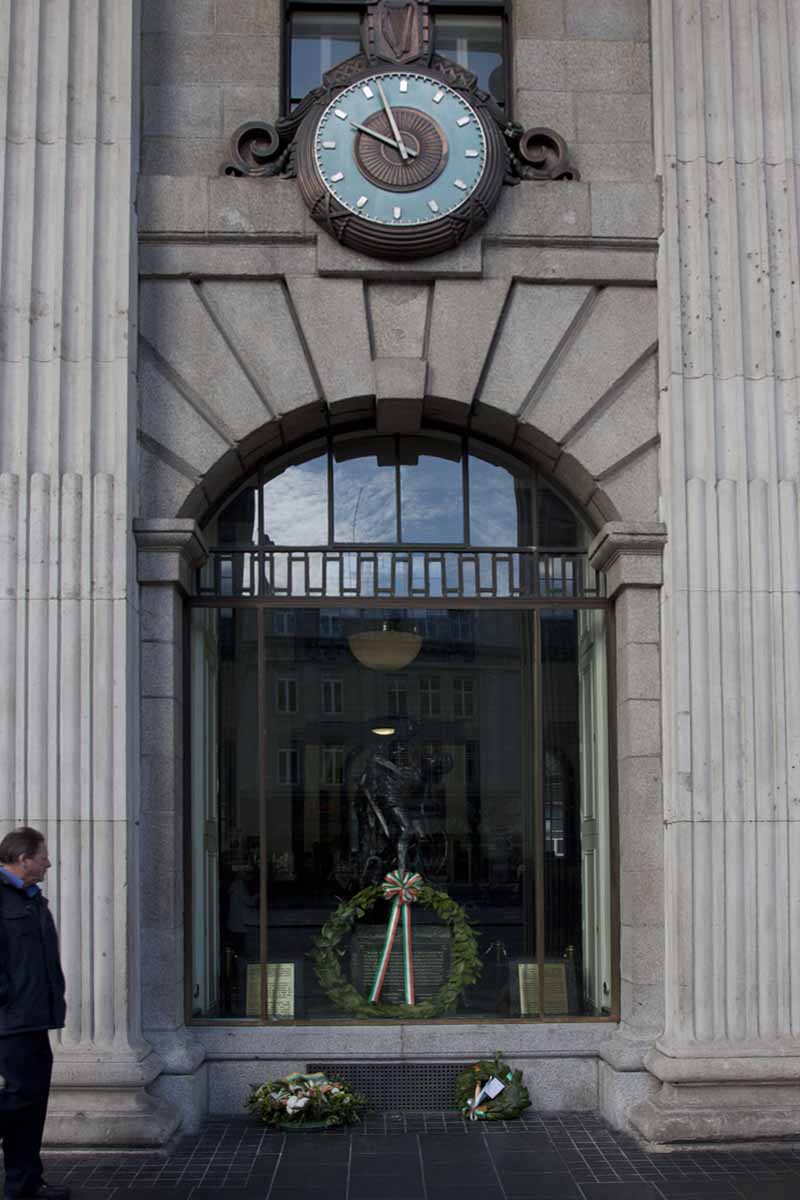 We waved farewell to our English chums as they headed home to Germany. We caught the DART to Tara St Station and began the O’Connell St walk north of the River Liffey. Custom House was glanced at briefly before heading to the GPO – such an important site in the history of the republic. It was out the front of this building that the Proclamation of Irish Independence was read, and the stone walls and plinths still bear the pock marks of the shrapnel of the Easter Rising – the GPO housed the rebel headquarters.

There are many statues along the wide medium strip of this boulevard commemorating the fallen and famous of this country: Daniel O’Connell, known as “the Liberator” for founding the Catholic Association and demanding Irish Catholic rights in the British Parliament; James Larkin, the founder of the Irish Transport Workers Union; Father Matthew, who was the leader of the temperance movement of the 1930’s – this was important because it enabled people to rally and become a political force because they were sober (!); Charles Parnell, a member of parliament who nearly won Home Rule for Ireland, but a sex scandal put paid to that; and finally, “The Needle” that replaced Horatio Nelson which was bombed by the IRA on the 50thanniversary of the Easter Uprising (the Needle is utterly useless, cost €5million and is known by many different nicknames, but our favourite is “the stiffy on the Liffey”).

On our walk further up O’Connell St we passed the Gate Theatre where Orson Welles and James Mason made their professional acting debuts. The Garden of Remembrance was our final stop on this excursion and was a particularly pretty memorial honouring the 1916 uprising – the pool of remembrance was tiled with a mosaic of Celtic weapons, symbolising peace by having been thrown in the water.

We caught the little red bus down the hill to the centre of town, again, and headed to the National Library. It was a beautiful and well-used library. The building itself was a marvel of decoration, especially the reading room – which was packed! Obviously loved by its patrons! It wasn’t a large library, but what it lacked in size, it made up for in beauty.
We used our trusty Lonely Planet Dublin guide for our lunch choice, which led us to the gastronomic delights offered at Bang Café. We had the lunch special (which is a much more economic way of doing the fine dining indulgences – and means that one can recover from the overeating before bed time!) We had grilled organic Claire Island salmon, cucumber, radish, avocado, sauce ponzu; truffled macaroni and cheese, carrot, broad beans, wild garlic, pine nuts; and a cheese plate of Boyne Valley blue goats cheese, Ardrahan, Coolea, nuts, truffled honey, crackers. The food was assisted by a light La Contessa Prosecco, an Ana Sauvignon Blanc from Marlborough and Gouguenheim Malbec from Mendoza. Everything was completely spot on with the quality of both the service and the food. The salmon was delightfully moist without being oily. The ponzu had a hint of wasabi that worked beautifully with the citrus flavours and avocado. Had to walk back to the hotel – as usual, too damned much food!Go toBang Restaurant
We rested and geared ourselves up for the evening ahead that, following hard on our lunches heels, would really push us over the edge into the void that was both gastronomic bliss and complete overdose and probably catatonic state!! We frocked up a bit (well, as much frocking up as Nic can do when she travels without a frock and high heels – so basically cashmere and silk and trousers, and a honking great hunk of Latvian amber around her neck!).

The taxi dropped us at the Shelbourne’s Horseshoe bar for champagne. It was so packed that we asked to share a table with 3 people (2 of whom were teachers celebrating graduating with masters) and proceeded to have a delightful and energetic chat that rambled in many directions and was enjoyable for all involved. Almost a shame we had to duck off, really . . . Oh, who am I kidding?! We were going to Restaurant Patrick Guilbaud for dinner, so it wasn’t THAT much of a hardship to dump our new friends of 30 minutes for probably the finest restaurant in Ireland (with 2 Michelin Stars, no less!).

Patrick Guilbaud’s was absolute perfection!!! When we arrived through the discrete front door to the townhouse – a classy plaque the only indication that we had come to the right place – our coats were whisked into cupboards secreted in the wall and we were shown to the lounge for a pre-dinner aperitif – choosing between 3 famous French champagnes was very difficult, but we went with the Laurent Perrier. Our table was at the end of the dining room with our backs to the wall – the spectacular view before us of the ballet of waiters, sommeliers and various ranks of maître d’s gracefully gliding through the intricate choreography that is fine dining service. All staff was French, and it was a particular highlight when Monsieur Guilbaud himself came to our table, shook our hands and enquired if all was satisfactory. Surreal and sublime, M’sieur, merci beaucoup! Go to Restaurant Patrick Guilbaud

For the meal itself, we shared our courses so that we got to savour 4 dishes instead of 2 – a most satisfactory plan! (Actually more than 4 if you count the amuse bouche the kicked off the meal!) Starters were: roast Castletownbere scallops, light garlic emulsion, parsley Pedro Ximenez reduction; fine tart with fennel, pollen, raw and marinated vegetables, Saint Tola goat’s cheese. We followed with: poached Annagassan blue lobster, butter radish, green apple and lime jus; braised Atlantic turbot, fregola sarda, heritage carrot, truffle and citrus vinaigrette. We entrusted our wine choices to our sommelier, whose selections complimented our culinary delights beautifully.

After the meal, we were shown back to the lounge where our whiskey and calvados awaited with some dessert versions of amuse bouche – various tiny delectable chocolate mouthfuls! This restaurant and the meal were completely perfect and unforgettable. What wasn’t perfection, however, was walking back to our digs only to discover one amber earring missing. Nic had put her coat collar up to ward off the cold, actually felt that both earrings were there, and strode off into the night (ignoring the instinct to remove the earrings for safe keeping). The coat collar must have dislodged it somehow during the energetic walk. Spent 2 hours retracing our steps back into Dublin centre and then home again, but bollocky shitity brickity – no earring!

2 Replies to “North of the River and Patrick Guilbaud’s”