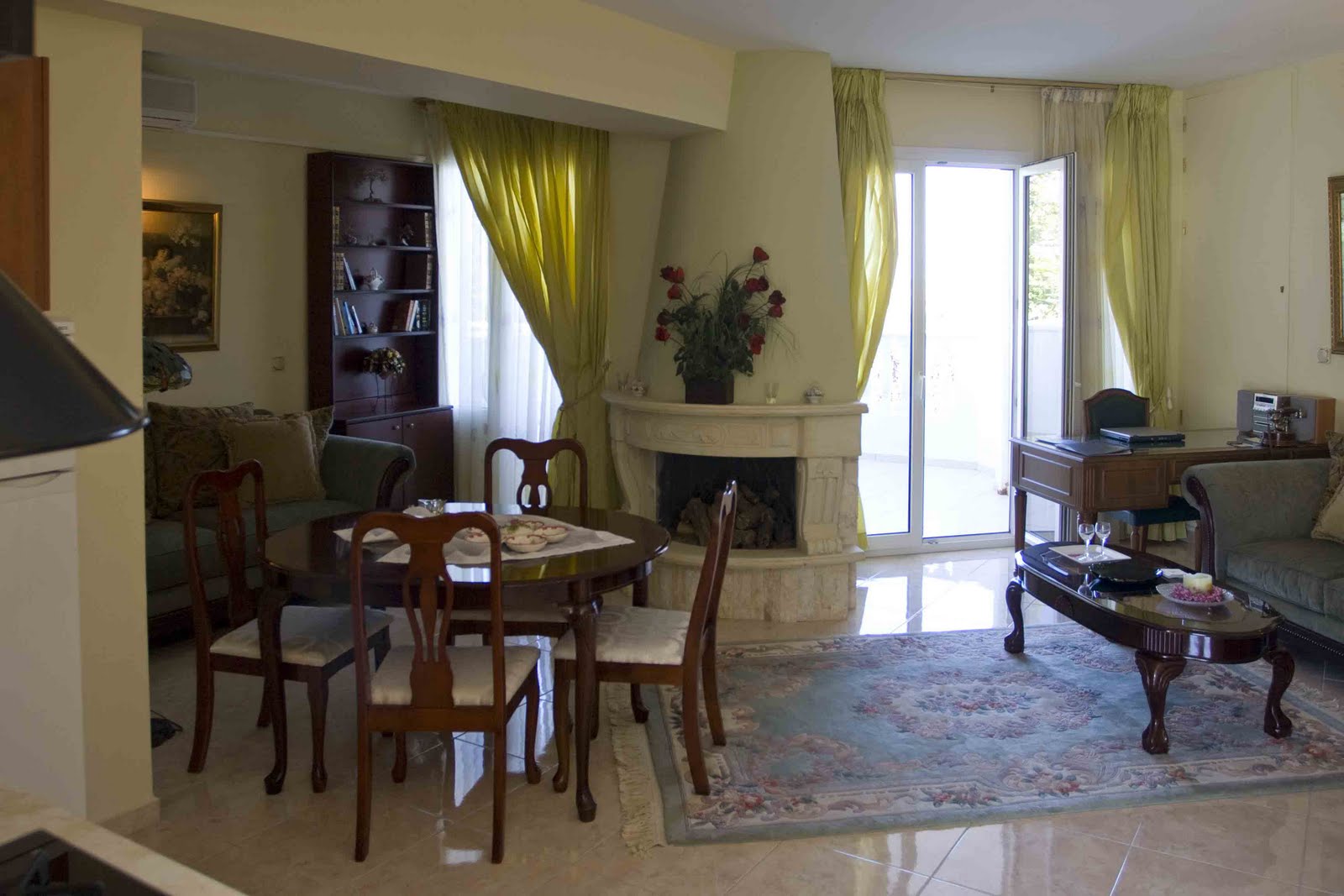 Inside our suite ‘the House of Flowers’ at Vergis Epavlis 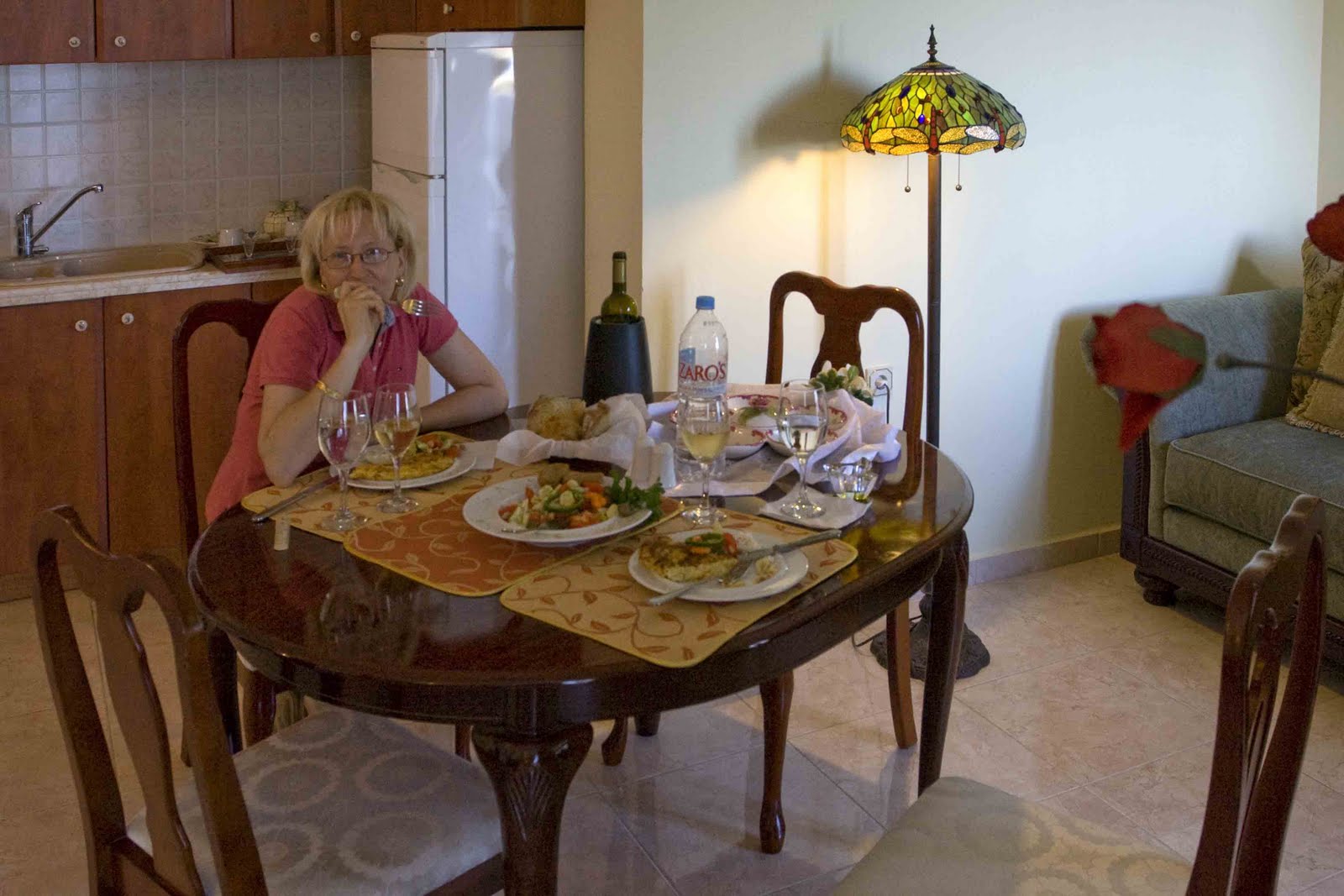 Nic and lunch (maybe a big belch is behind that hand!) 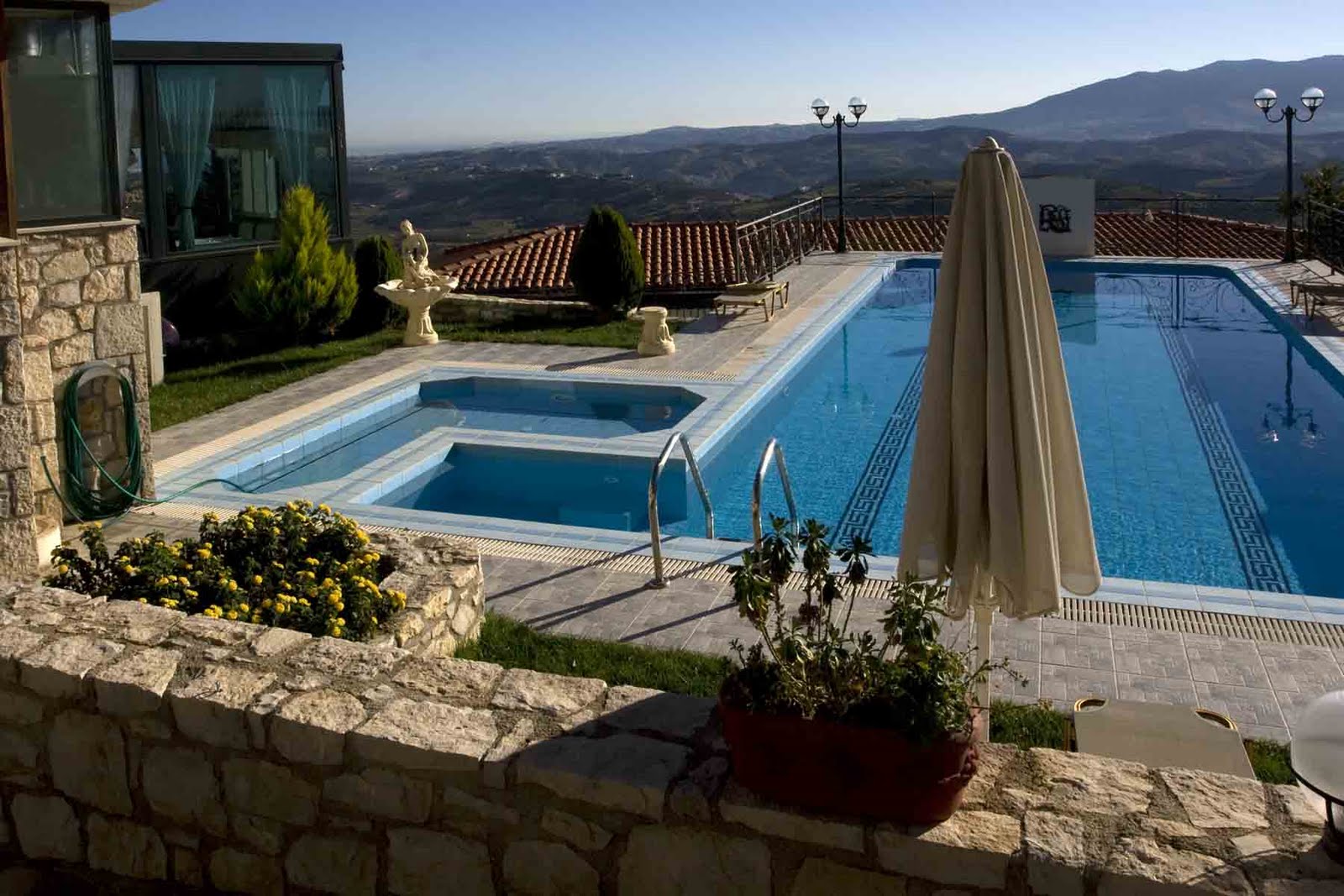 After our afternoon sleep in Rethymnon, Nic decided to search the net for possible accommodation in central Crete, with no definite plan of where, just seeing what popped up. And something quite special did. ‘Vergis Epavlis’ are 4 luxury suites on the outskirts of a town called Agios Myronas, south of Heraklion. They are very classic, upmarket Cretan in design, and the location is simply superb. We rang a day ahead and they had availability for 2 nights and gave us a big discount on the rack rate. This accommodation would have to be one of the most memorable of any we have had on any holiday, and this was entirely due to the hosts. They were incredibly personable – hugely talented with people and loving it! We were greeted with a sumptuous lunch whipped up by Mrs Vergis (Stella) – a Greek salad and potato omelette, all made with fresh local organic ingredients, and they tasted better than anything we had eaten before! The flavours so rich and tantalising! We also had a bottle of their own white wine (commissioned from the vintner, but labelled for them). Knowing that we were celebrating our wedding anniversary, Stella also threw in her own recipe chocolate, cream and cherry ice cream dessert creation….and some home brew raki! What a lunch! Fit for a king! Needless to say, we didn’t need any dinner that night, but made sure we went for a walk up a stupidly steep hill to get to the village to have a little explore (and nod and say ‘kalespera’ to all the men sitting in their groups in places that looked like combinations of cafés and TABs!). 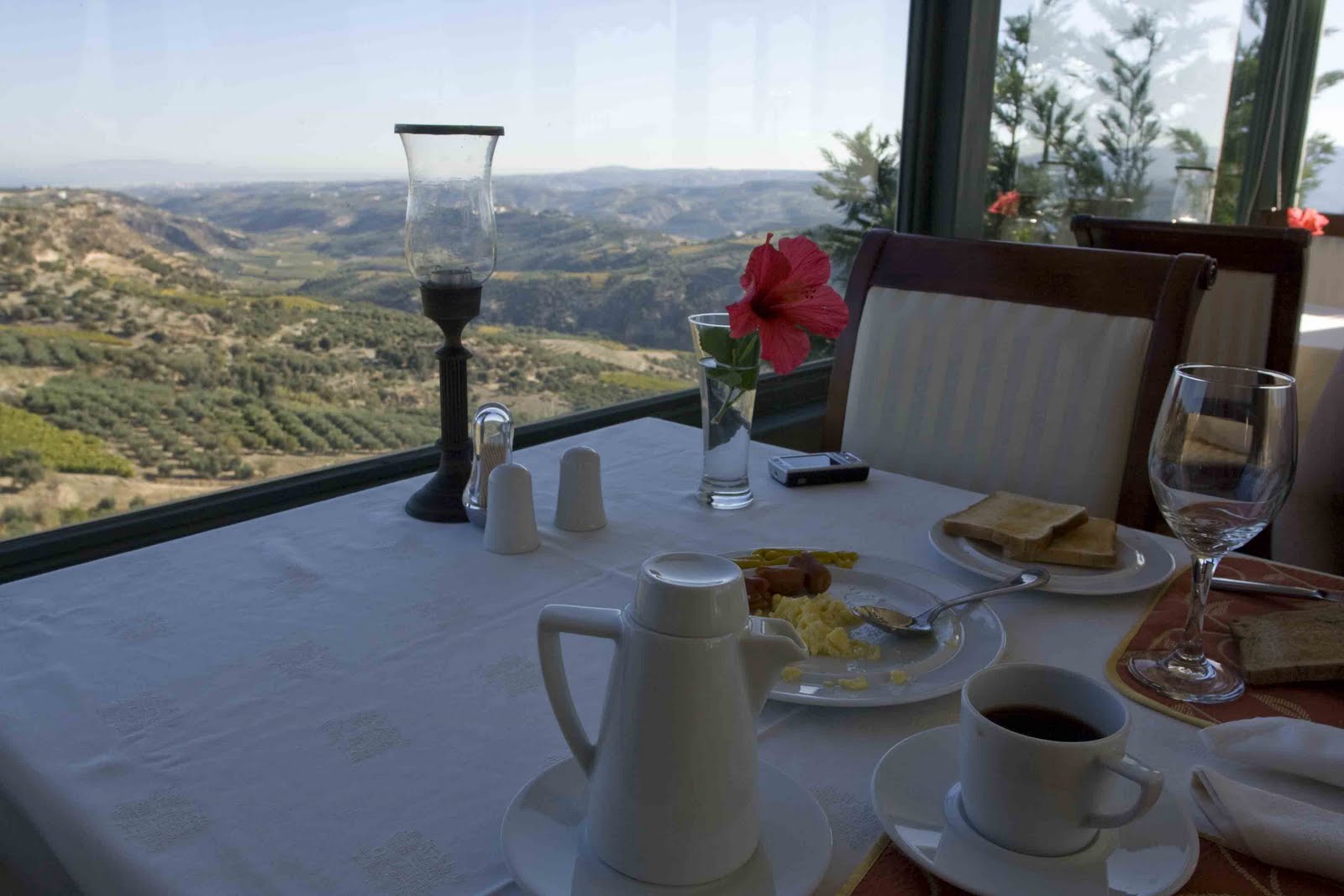 Slept well! Had the most extravagant breakfast of our lives the next morning. It was a buffet, but Stella and Stellois insisted we try many of their Cretan specialties, so pretty soon we were as full as googs! THEN Stella brought out a DESSERT!! FOR BREAKFAST!!! A little ramekin of vanilla cream each. Now, we couldn’t say ‘no’ and insult her, could we? So we waddled out of the breakfast room and set off on our day of exploring, suggested by our trusty Ioannis (the manager). 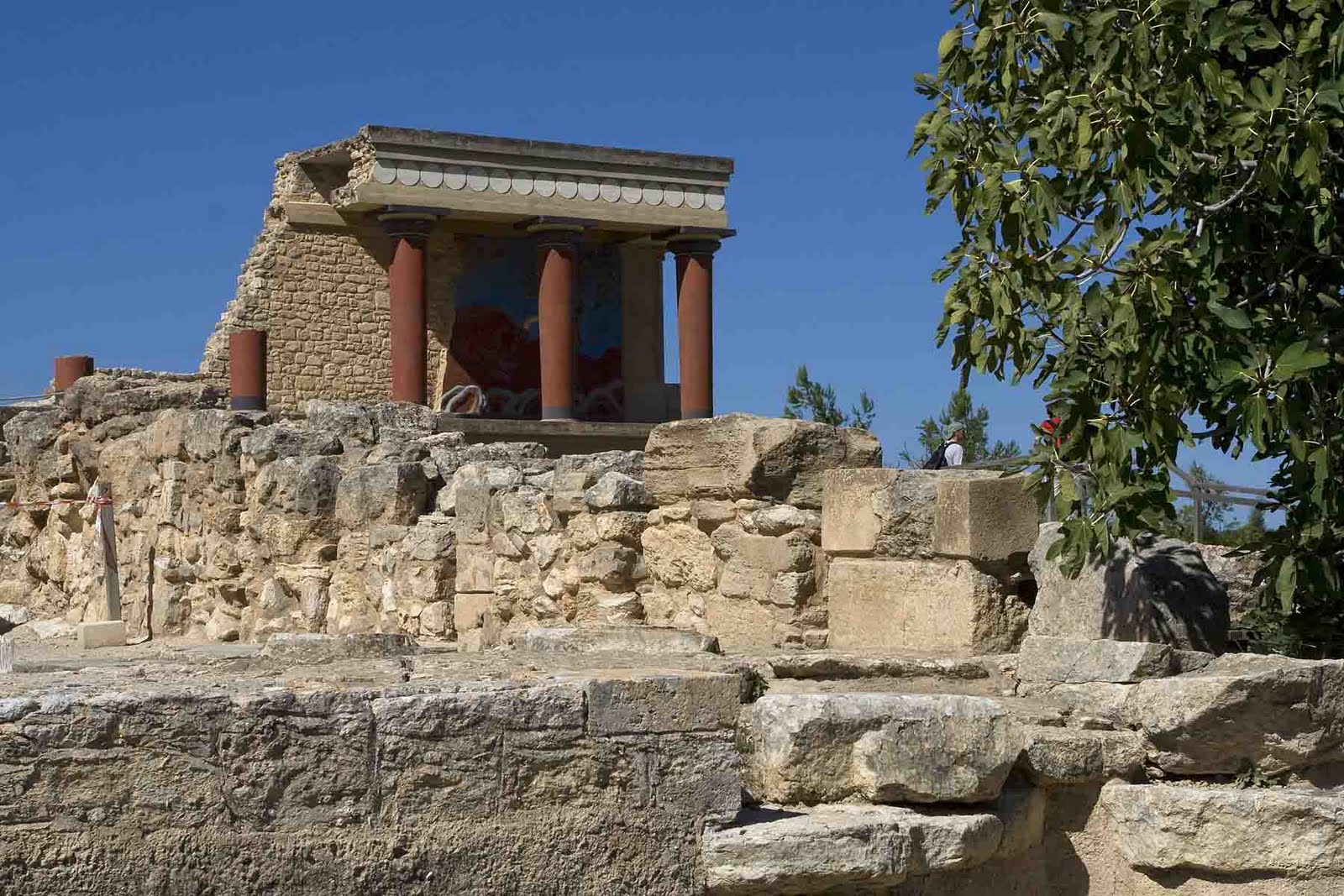 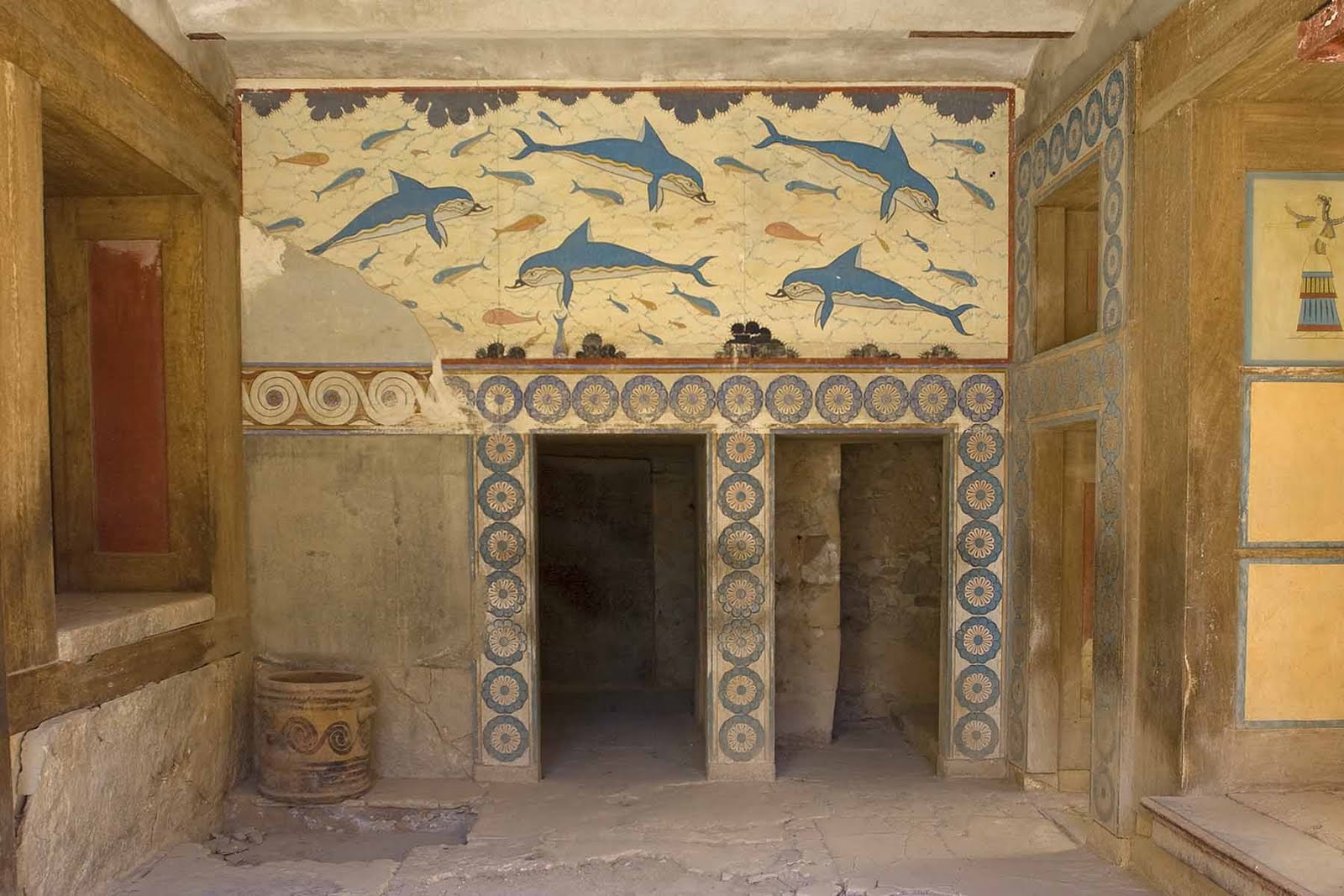 Dolphin fresco in Queen’s apartments, Knossos (although historians say this was actually on the floor, not the wall) 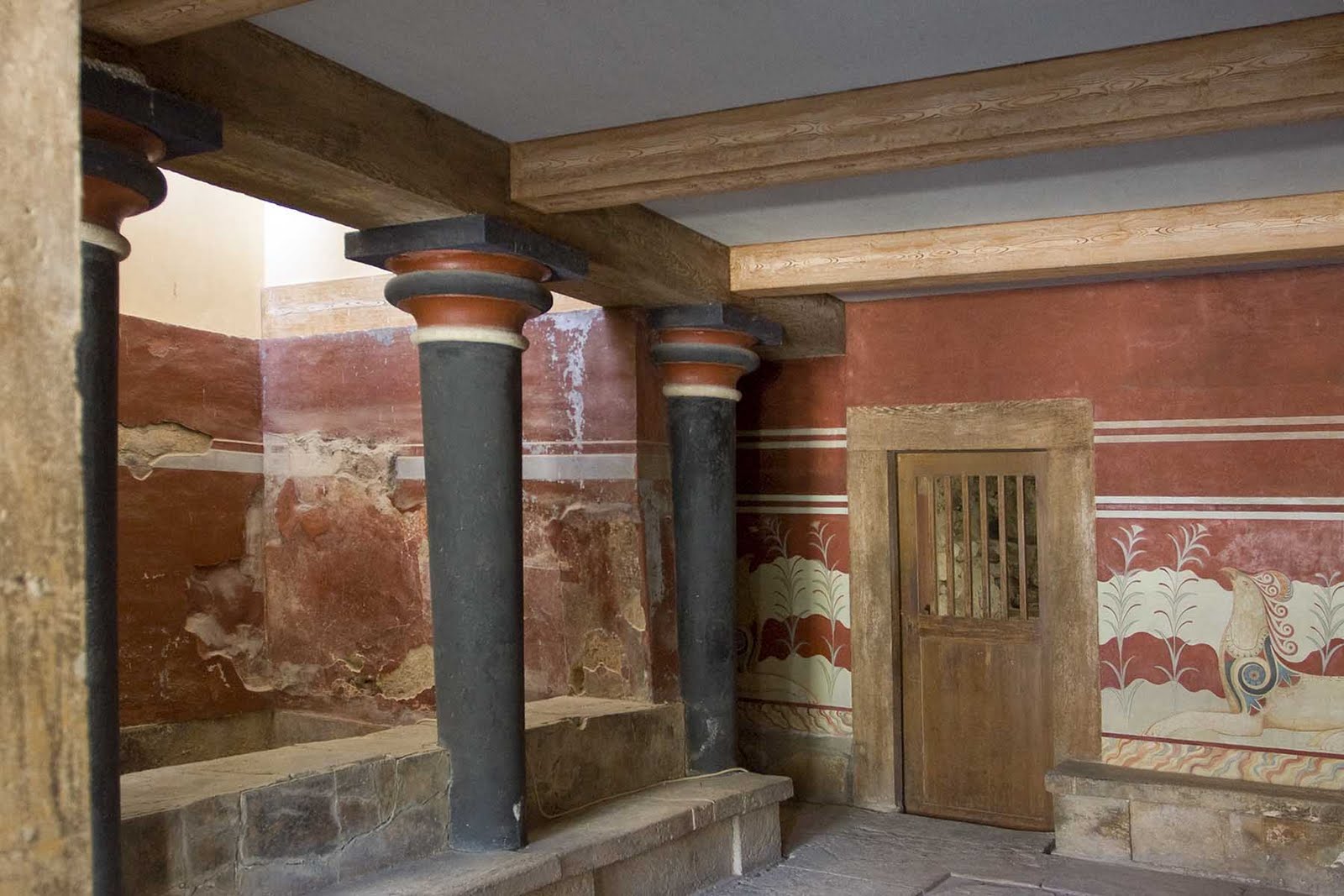 Another room in the Queen’s apartment, Knossos 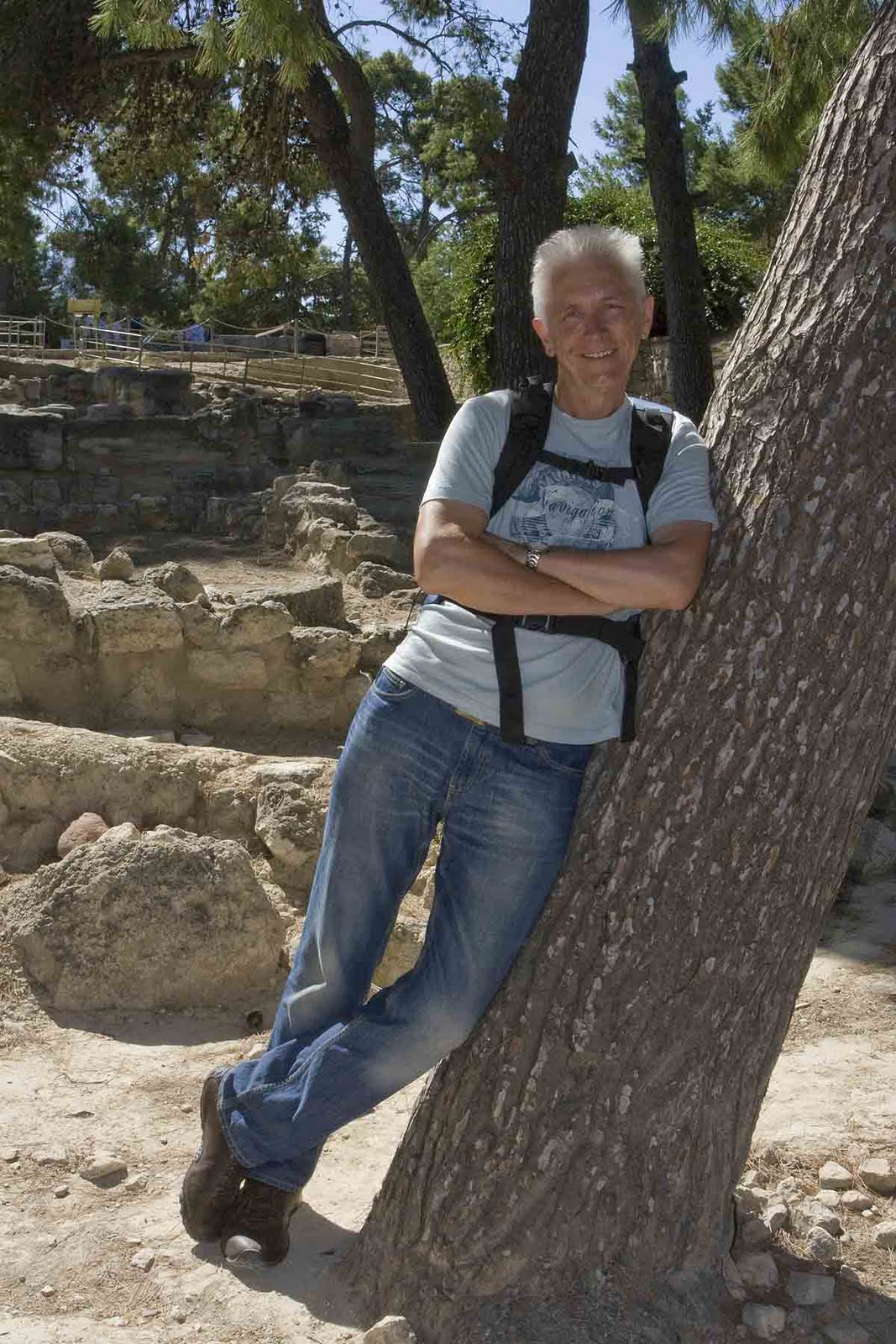 But wait! Forgot to mention stopping at Knossos on our way from Rethymnon to Agios Myronas. This is the largest Minoan palace in the world and it was destroyed by the tsunami caused by an early eruption on Santorini. In the early 20th century, Arthur Evans, a British archaeologist, set about excavating and rebuilding these ruins. His reconstruction is now frowned upon by historians and archaeologists, but I guess he thought he was doing the right thing at the time. There is a definite feeling of the site being “Disneyed” – built over with concrete and coloured beautifully to make us all go ‘ooh’ and ‘ahh’ at the wonder of the excesses of the Minoans. Big 20th century frescoes abounded. There is now huge debate about whether what Evans said ‘was’ actually ‘was’. But they can’t exactly tear it all down, can they? 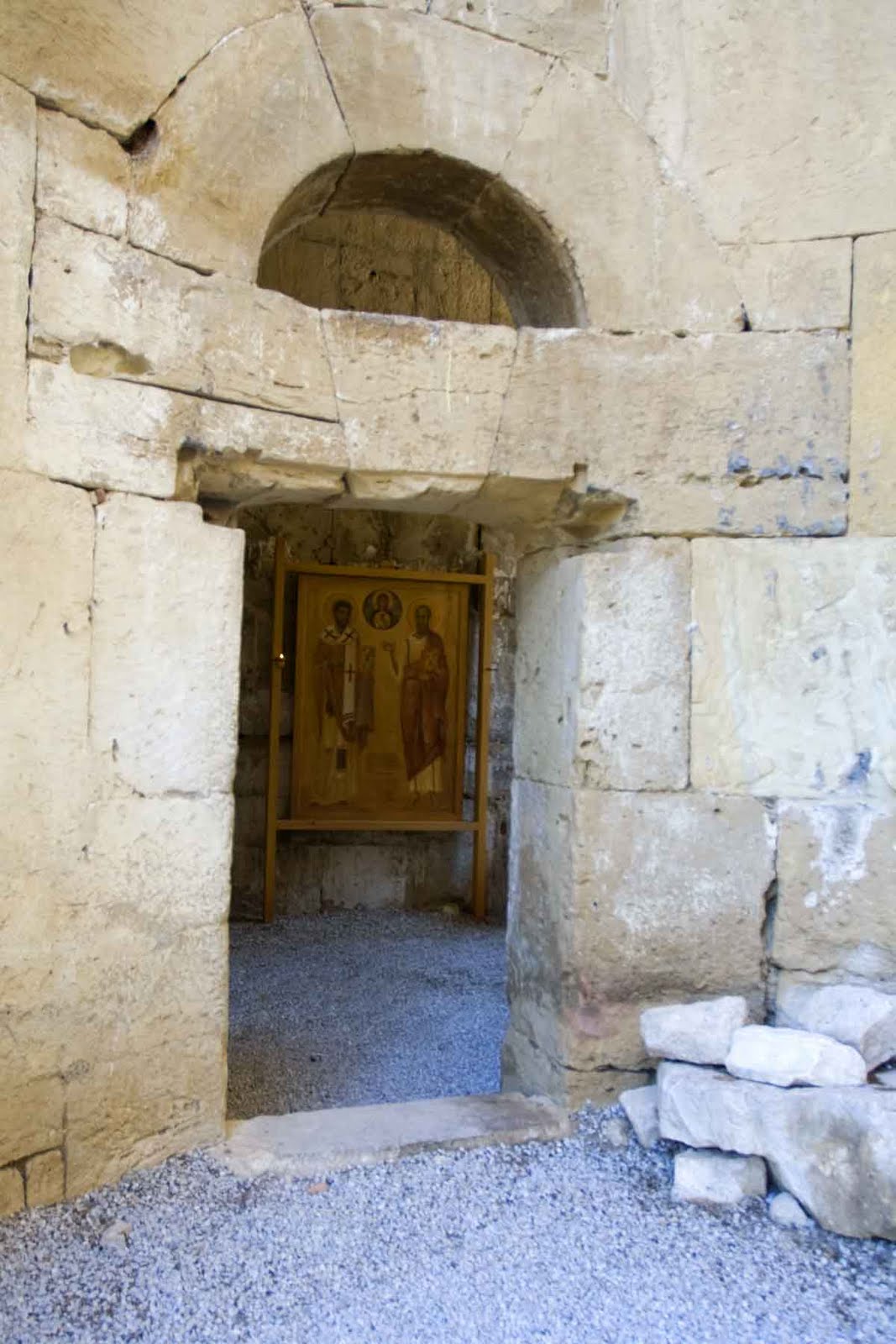 Basilica of Ayios Titos at Gortys

So our day trip from ‘Vergis Epavlis’ began late morning (that ginormous breakfast slowed us down a tad!), with our first stop being Gortys. This is not a ‘numerous star’ site on the list for the guide books, but we enjoyed it. It had a lovely church (or half of a church remaining!) – the Basilica of Ayios Titos – in the name of the saint that converted the island to Christianity. Quite lovely There was also a little Odeon theatre. The impressive thing about the Odeon was the full inscription of the ancient city’s laws on the walls of the audience corridors. Largest inscription of it’s kind in Greek.

We went from there to Phaestos (or Festos, or Phaistos, or…the list goes on!). This spoke to us more than Knossos. It wasn’t quite as large, but it was still very impressive. The supposition is that these people built their palace in this location (on the side of a hill) for the sheer beauty of the view, rather than for any defensive advantage. Nice. And the view was spectacular! 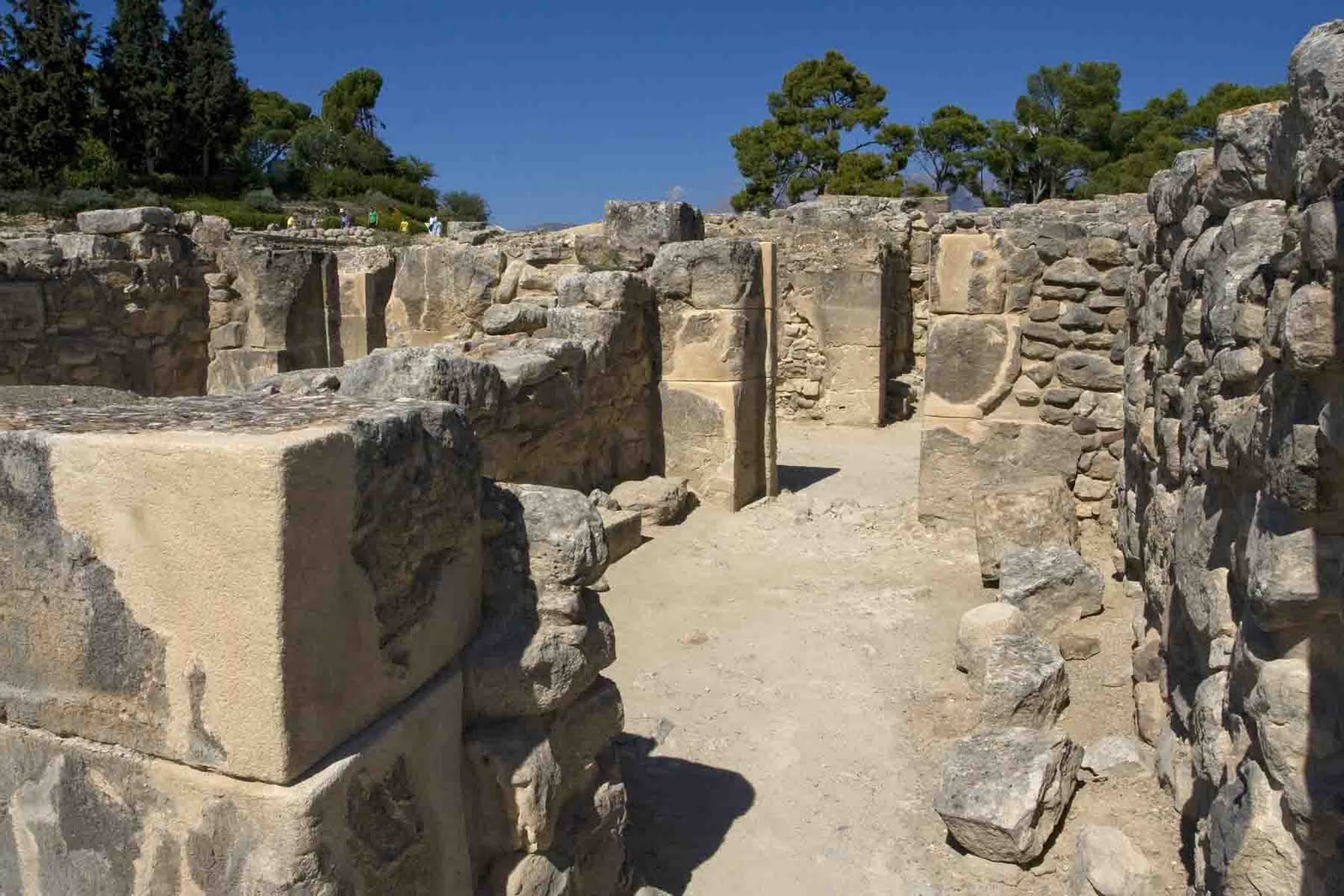 Ruins at Phaestos
We had lunch at Taverna Sofia in a village called Sivas. The owner was witty, friendly and wanted to call the police because we didn’t want bread with our lunch. They still rewarded us with more raki than we could drink and an apple for dessert that looked like it had been bred on steroids, it was so huge. We left them very relaxed – John more so than Nic, cause she was driving! We then headed south past the Odigitrias Monastery down a dirt road, driving as far as we could go before parking and walking to the coast. Because we listened to the advice of the our trusty Ioannis, we only had about a 15 minute walk down the gorge to the coast, rather than the 45 minutes or more for those who left their cars way too early! 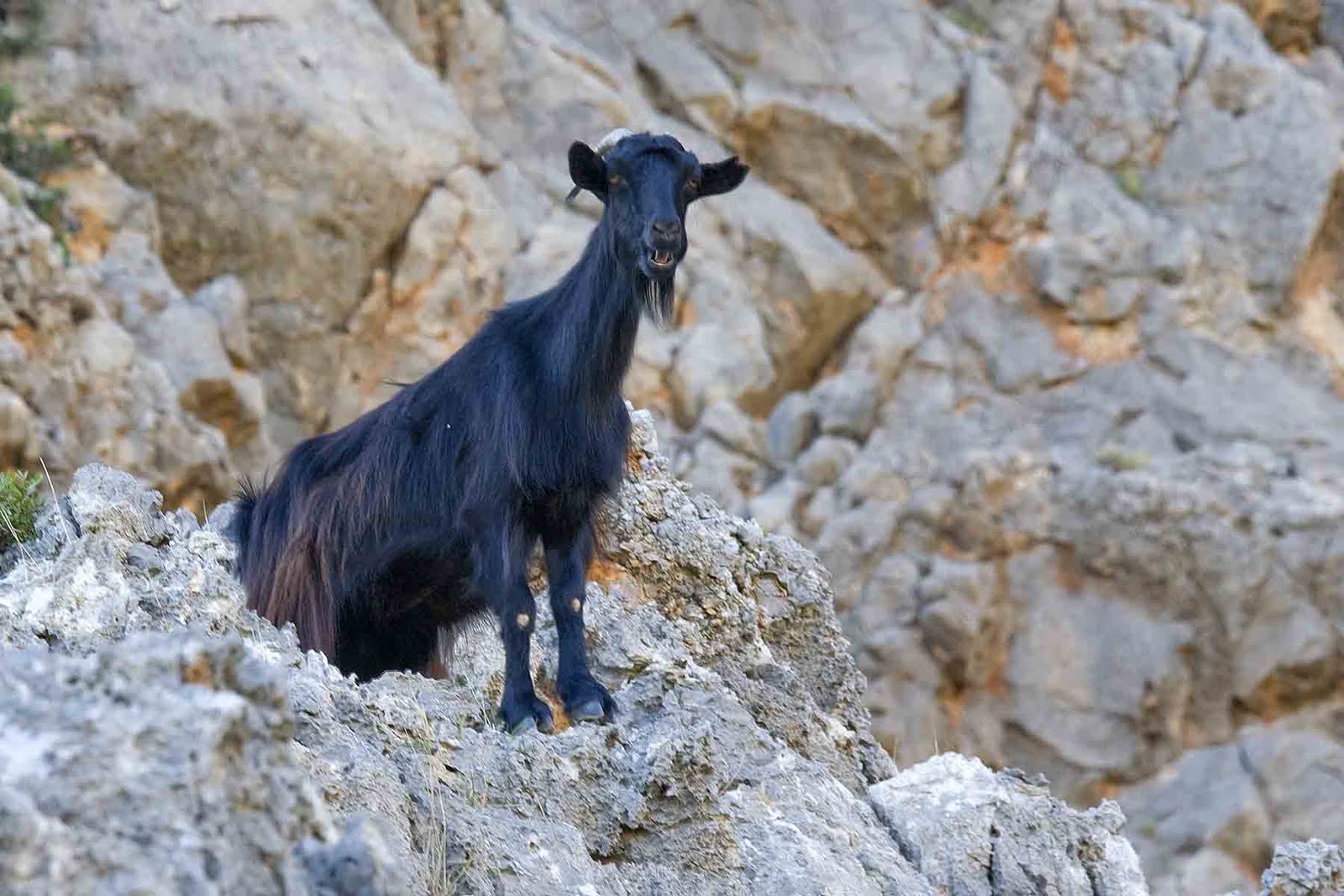 Musical goat
It was quite surreal walking down this gorge with the orchestra of goat bells jingling as we walked – the goats were wandering through the oleander along the gorge and clambering over the sides of the cliffs surrounding us. The buzz of the bees in the oleanders made for a nice cello effect under the bells. Bizarre, but perfect. We also stumbled across an old church (Ayio Farango) in the middle of nowhere with some cute kittens playing near the water pump along side it. Loved the marble inscription near the door of the church, warning people about nudity when visiting! Maybe that was aimed at the hippy population who camp on the pebble beach and in the nearby caves. We joined the hippies in our changing into swimmers on the beach and splashing about in the so very clear aqua water. Only spent about an hour at this pebble beach, but had such a delightful time. 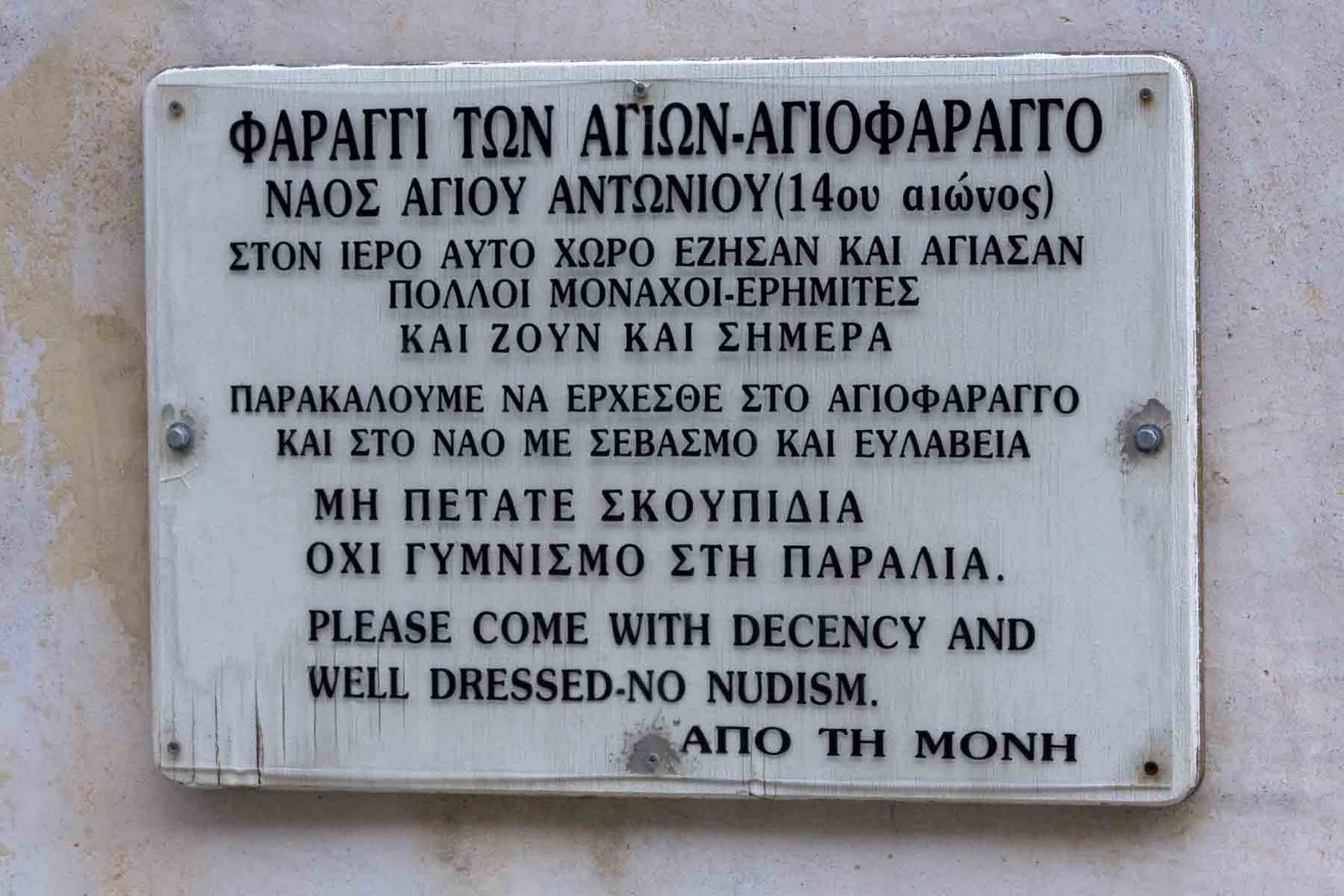 No nudity in church!

Camping hippies and goat on cliff

Drove back to our abode after our hippy experience, arriving about 7pm. Just about time for a quick change and a trek (rather than a stroll) up to the village for dinner. We went to the taverna with some sort of connection to the suites where we were staying and ordered what we thought was a small meal – one salad and one appetizer between us. Well, as our order was placed on an order slip for ease of the non-English speaking staff, we didn’t think to ask for ‘no bread’. So a huge basket of yummy brown bread arrived (a few varieties), and our meal was, of course, followed by a complimentary dessert and raki. The dessert was like nothing we had experienced before. It was true glaced local fruits – oranges, figs and grapes. Sweet and so very delicious. This meant yet another waddle home for the night. 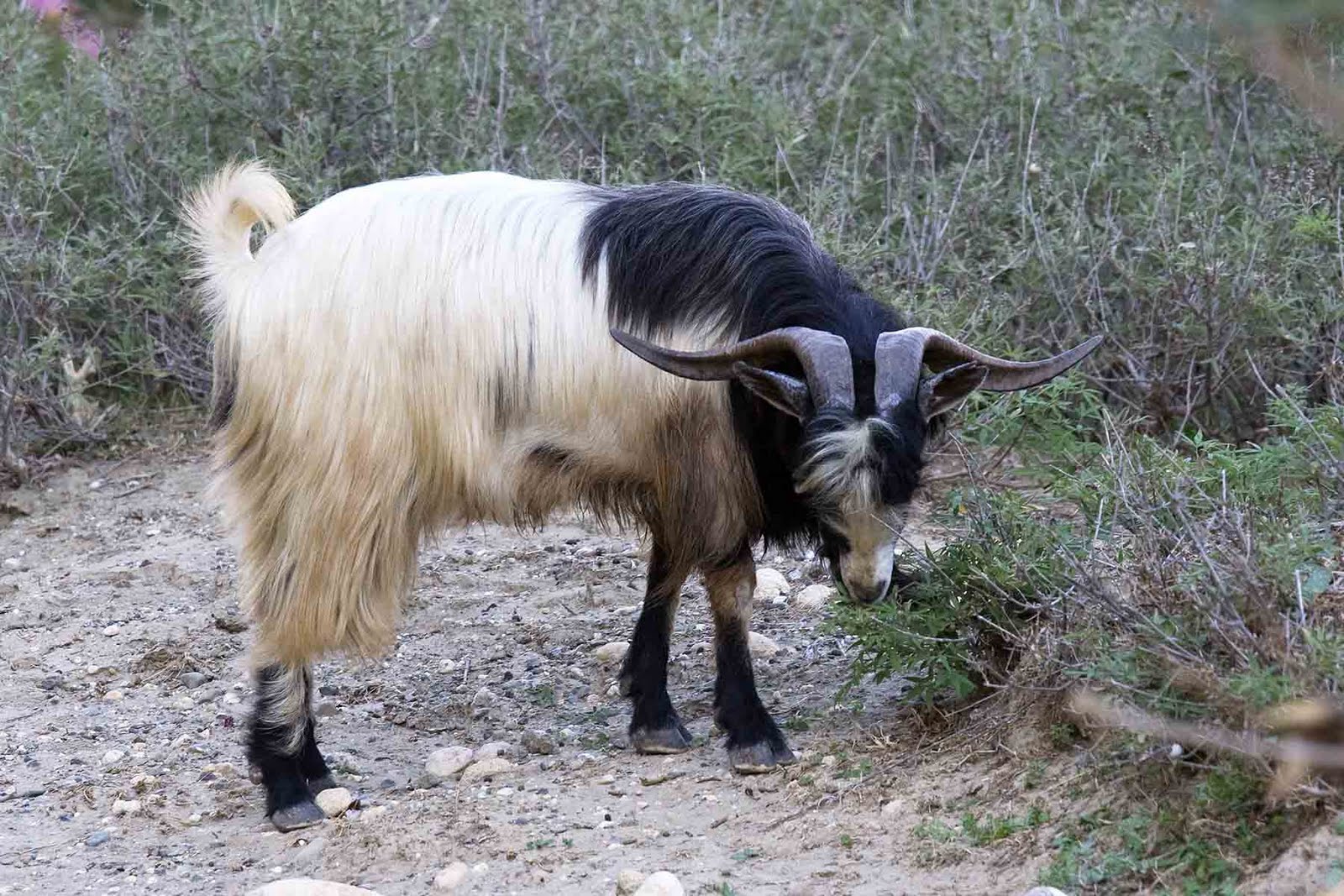 Billy goat – check out those horns!

Beautiful place for a swim

On the way back to our suite, we met two dogs. One, a sweet little medium sized mutt who was just so eager to play and chat, and a larger black male, who was only interested in coming along cause he was trying to get lucky with our friendly mutt. We thought after we had gone a few blocks, that they would run off again, but she was determined to keep us company. The property where we were staying had huge automated gates. We managed to get in without her following, but then she discovered that she could slip through the bars! After some leaping at her excitement of not being separated from us, she trotted off straight to the door of our suite (must have been able to smell us there). We squeezed through the front door without her (even though she was sitting expectantly right at the opening!), and started to make ourselves comfortable for the evening. She whined and barked a couple of times and then was silent. 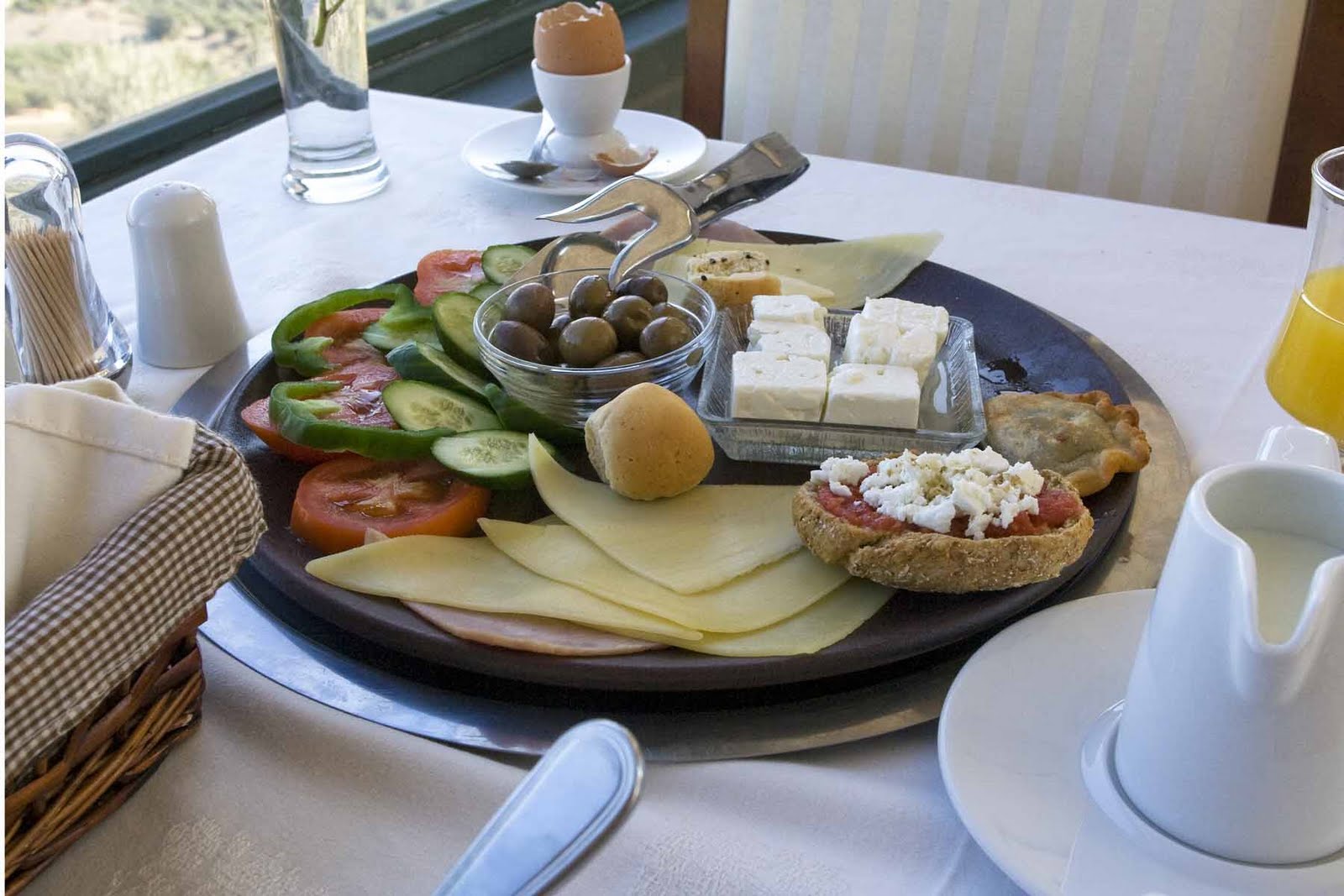 “Take me with you!!”
We went to bed and had another great night’s sleep, then the next morning, after showers and pottering about, heard this cute little bark at the door. She hadn’t left! As the owners of the property had a dog of their own (a lovely Dalmatian, Sara), they tried to hunt her away numerous times, but she just kept coming back to our door and tried to impress us with a mixture of her submissiveness and her boisterous enthusiasm every time we went out the door. She was smart, too, and would’ve been easily trainable because of this and her desire to please. Nic so wanted to take her home and was particularly sad when it was time to leave a few hours later. This dog just wouldn’t give up. It was only as we were driving away that she stopped following us. It was far too heartbreaking for a holiday experience!

Tree blocking our exit – see, no one wanted us to go!