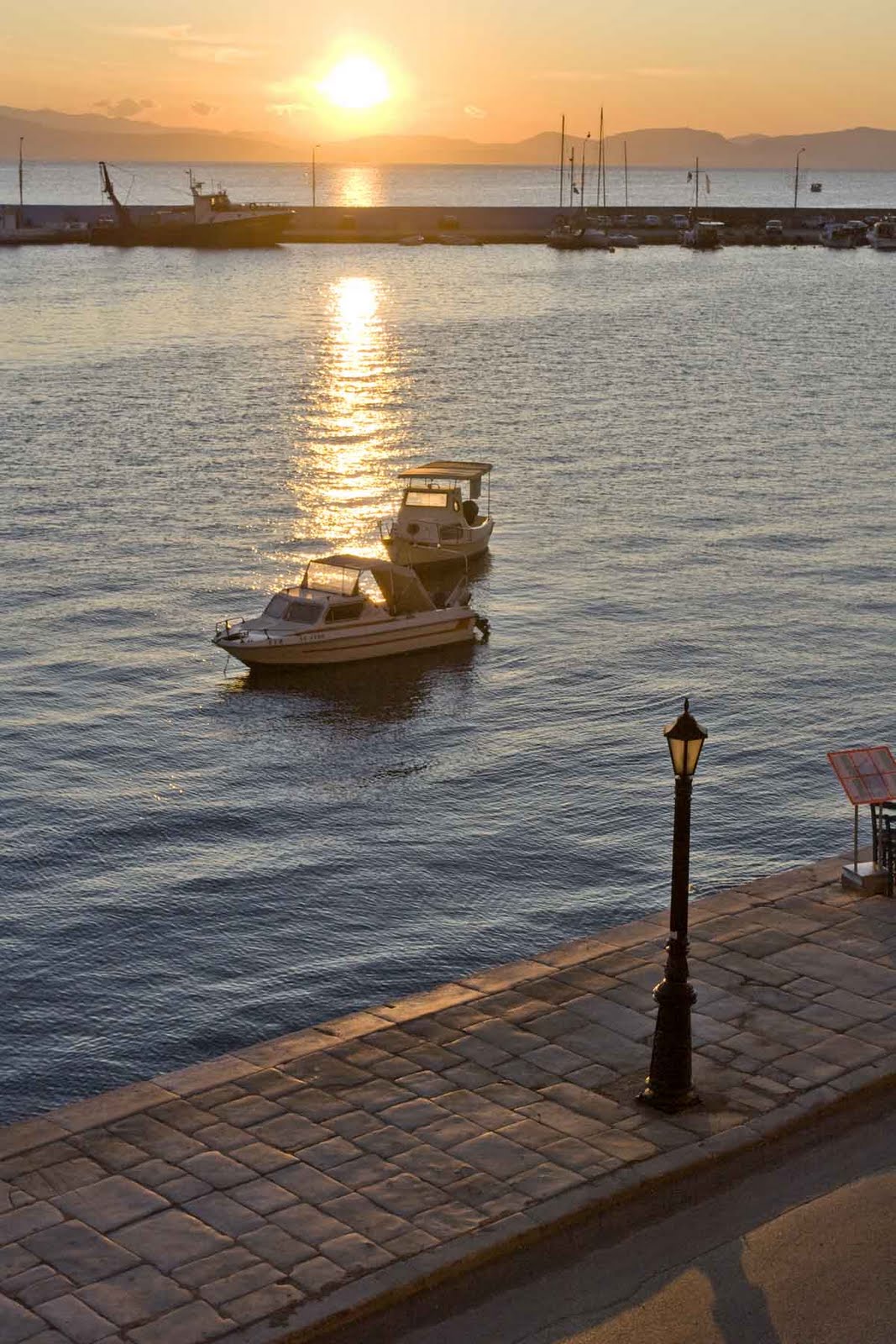 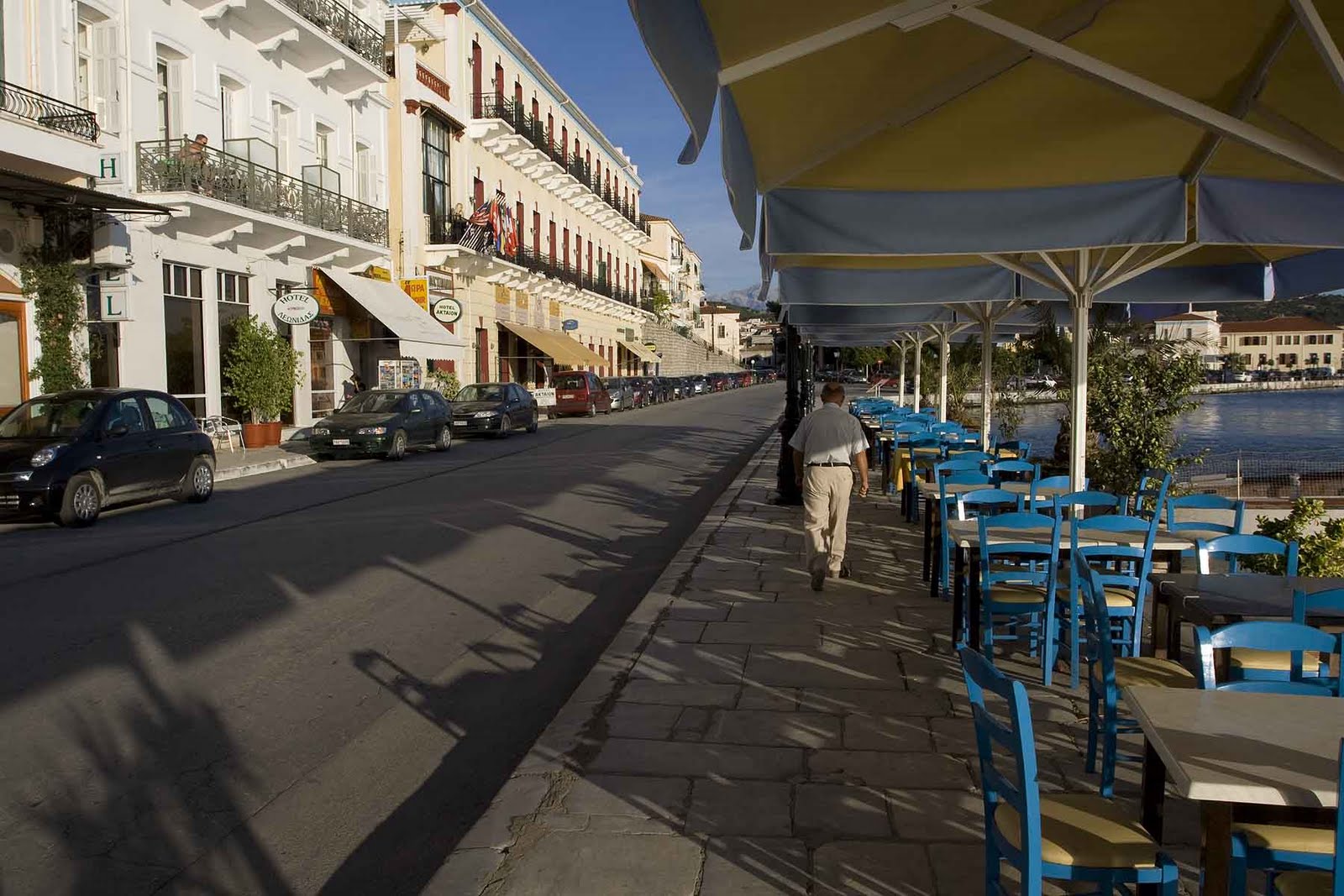 We began the day with a visit to the Dirou Caves near Aeropoli (only about 45 min from Gythio). For this excursion, we got in these little boats in the Glifada Cave and explored both arms of the underground river (about 2km) with our trusty guide steering the way while his translator pointed out highlights and regularly told us to ‘mind our heads’. Once we were finished we docked and walked about another 300m back to the daylight and our car. Such a magical, fairytale place. 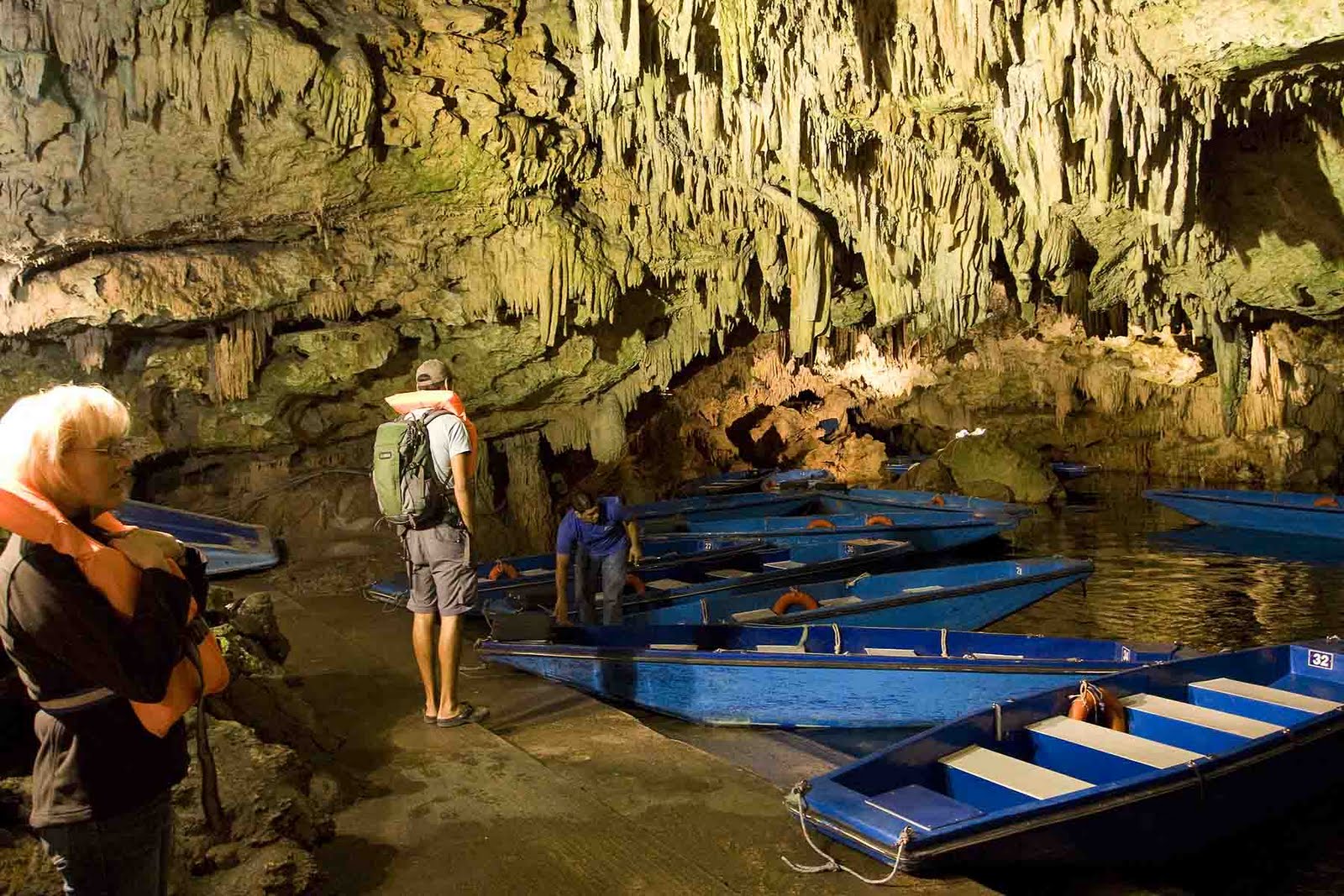 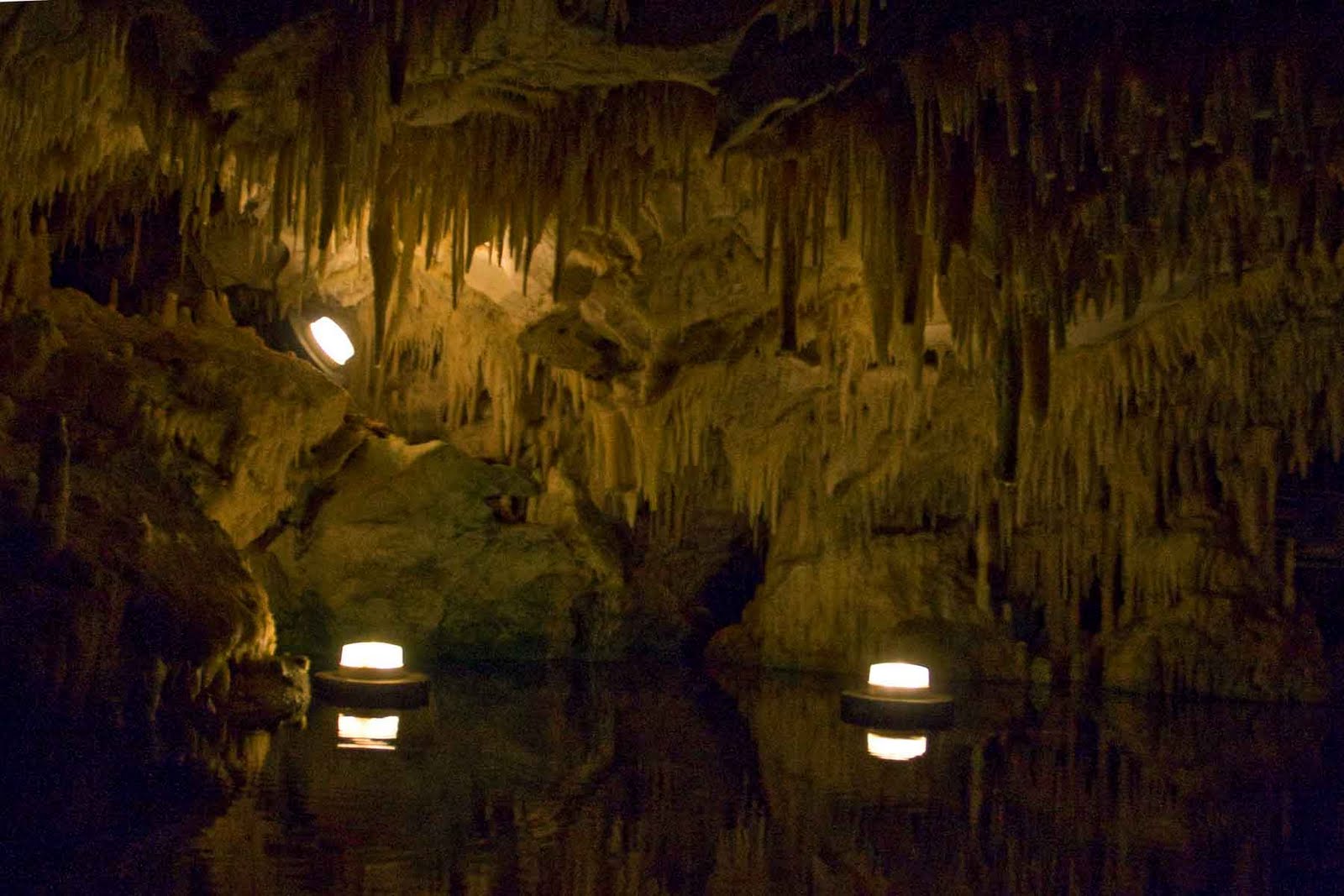 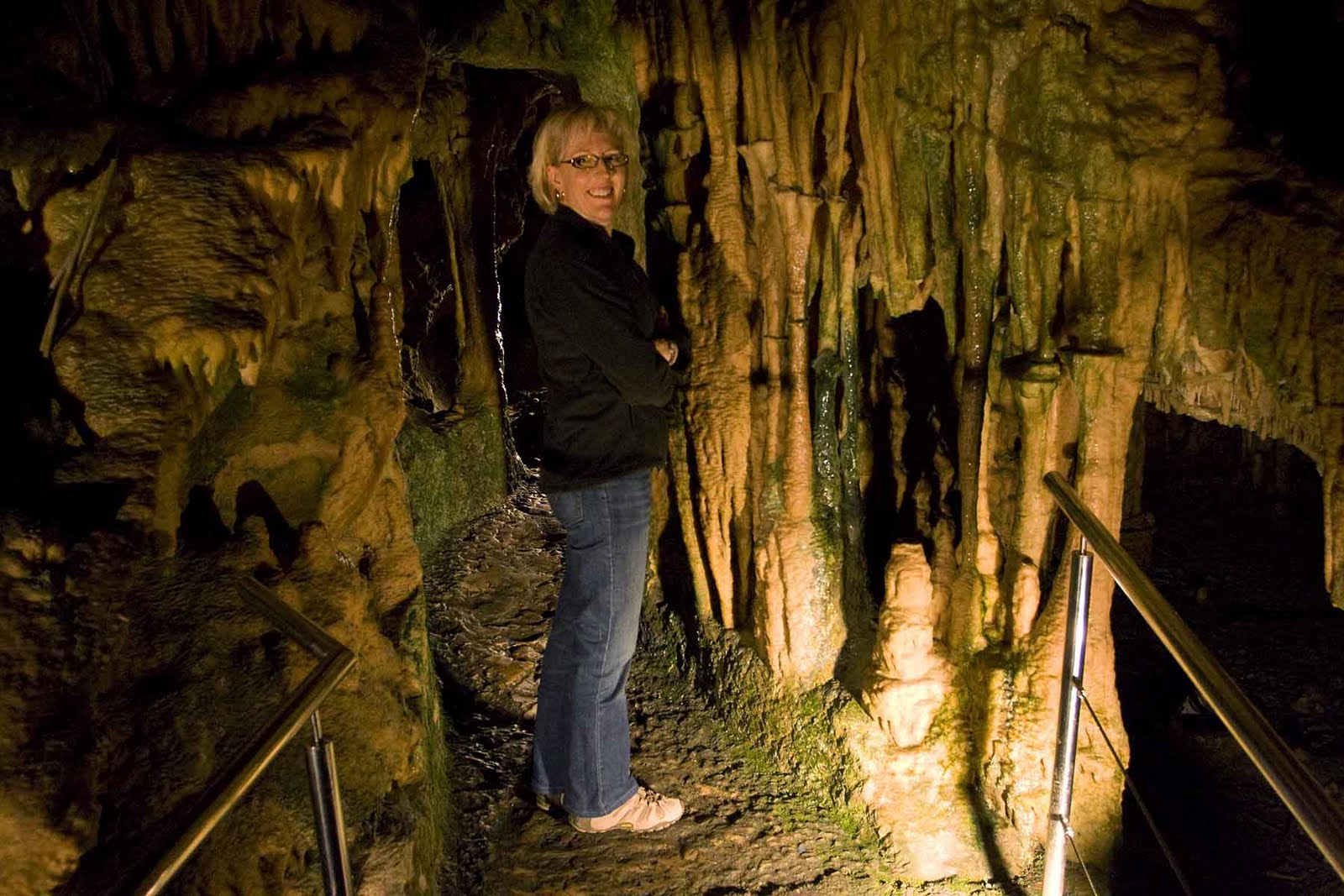 Inside the Dirou Caves
The rest of the day was interesting, to say the least. We left the caves at about 10am and arrived at our hotel for the night at a little after 7pm…and what happened in between was a lovely mixture of excitement, frustration and even a little fear (with a fabulous lunch thrown in the middle). We set out on our quest to find the Temple of Epicurean Apollo – a wonderful temple highly recommended by our friend, Costa, who told us that we simply HAD to see it. We were feeling fairly confident in our GPS and the research we had done the night before (with the aid of an old Michelin guide found in our Athenian hotel!!). We programmed the name of a recommended village to stay at near the temple into the navigating machine and set off. What we hadn’t factored in was that there are MANY different spellings of EVERYTHING in Greece. So our GPS took us to a little hamlet version of this village (like it’s little cousin) but not the actual village. We drove around for a bit and then stopped to ask a man who didn’t speak English if he knew where our village was. He gestured down the road further and we set off. We found the recommended hotel from the Michelin guide – which is when we discovered how old the book is! The hotel looked like a ghost town. It wasn’t that old and was only abandoned in the last year or so, but it was very creepy. Ditched whole village and pressed on. 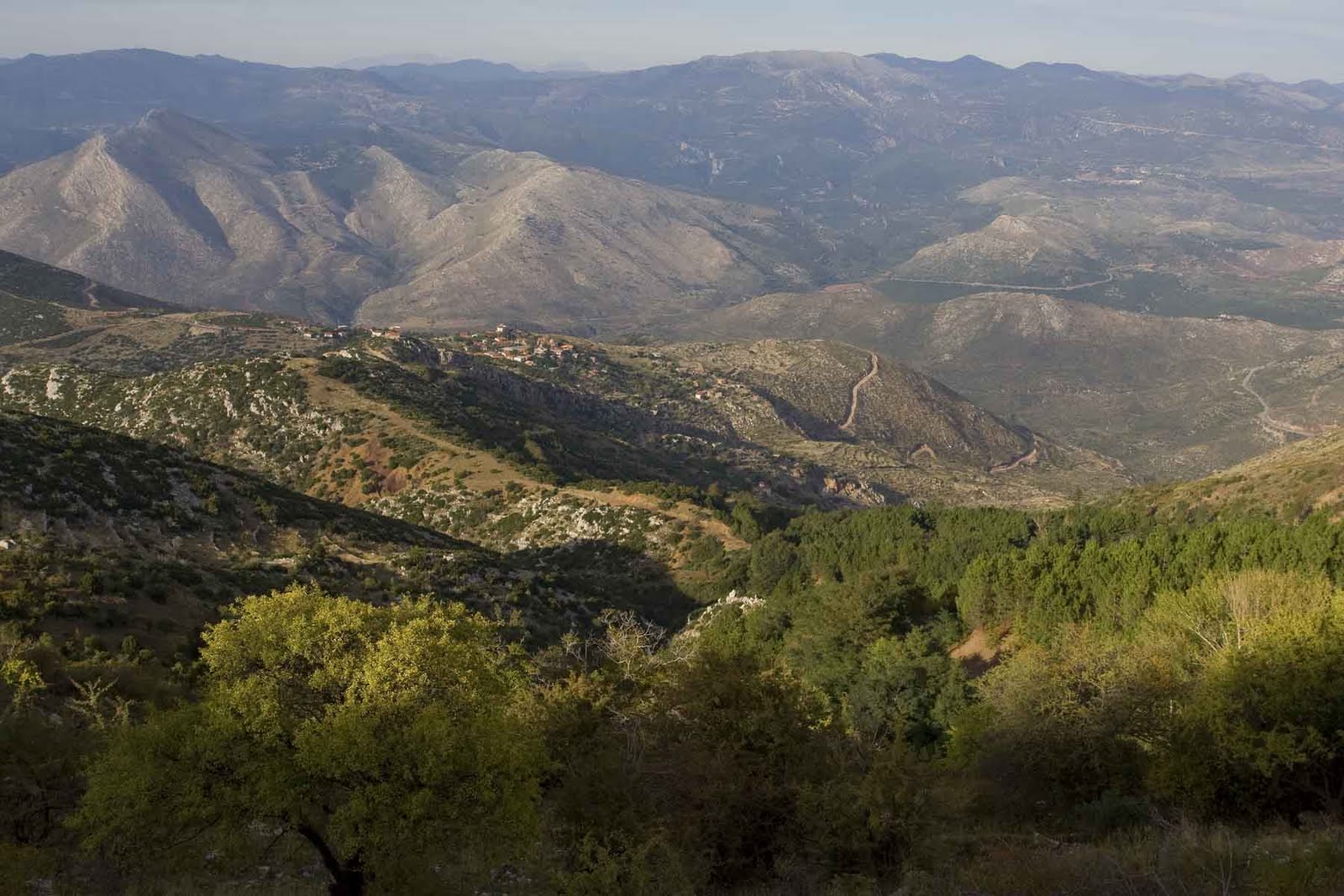 View from one of the many roads travelled this day
At about 2pm (perfect Greek lunch time) we arrived at Dimitsana, which was very charming and had another superb lunch at a tiny taverna filled with locals and great traditional homecooked food – even got a chance to compliment mama who popped out of the kitchen in her apron for a chat with her daughter who was waiting on us. She giggled sweetly at our praise. 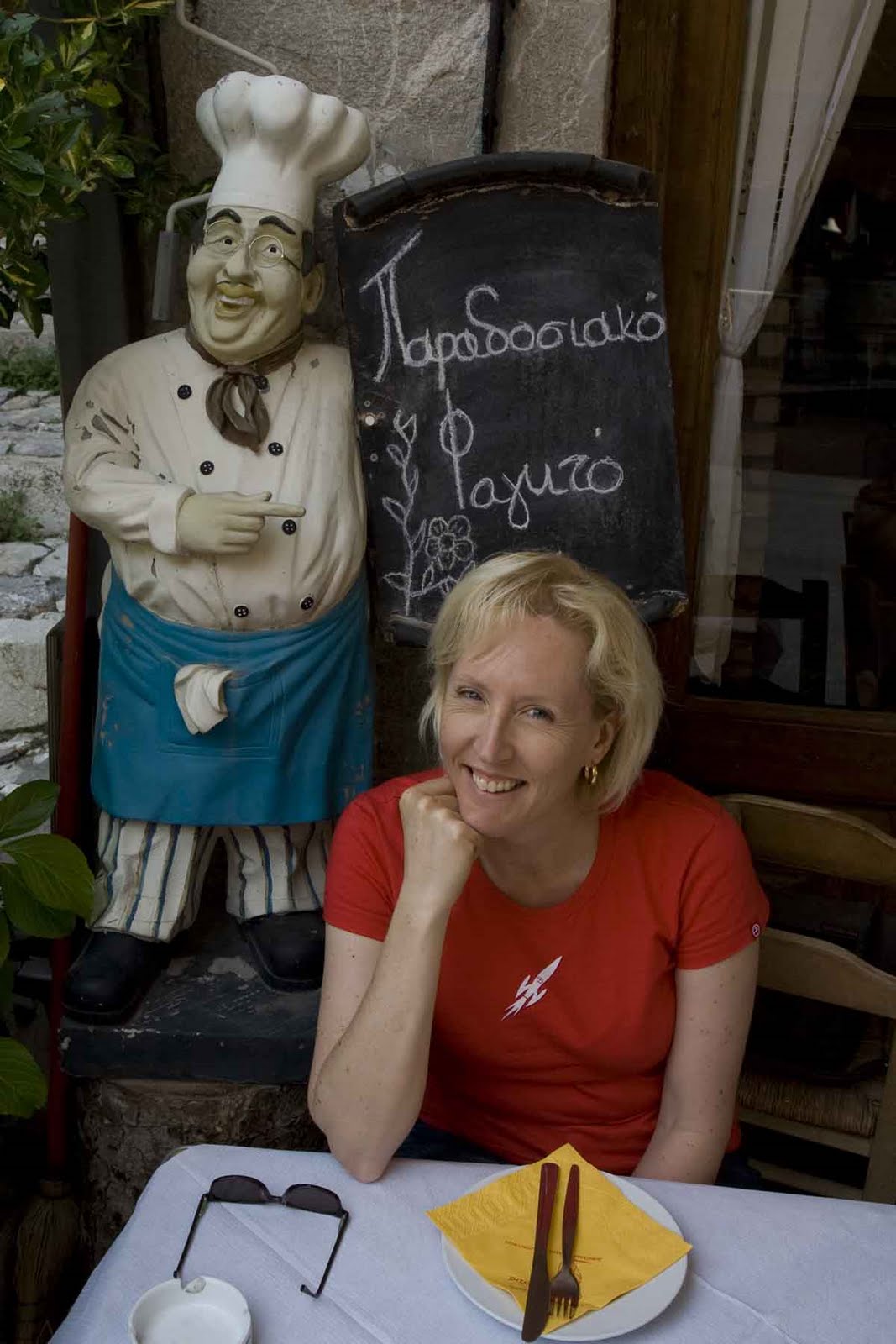 Taverna in Dimitsana
We pressed on, armed with directions from our hosts and reference to a google map we had downloaded earlier, to find our Epicurean Temple. So we drove and drove and drove and ended up on a very dodgy, narrow loose rock ‘road’ heading up a hill. We were right on course for our temple (according to our googlemap) when things ground to a halt. We were stopped by a herd of goats, a battered old car and the owner of both – an old farmer. We got out of our car for a…? What do you call a ‘chat’ when it’s actually done in mime? He gestured that we were, in fact, nowhere near the Temple of Epicurean Apollo and indicated which road we had to take to get there. By this time it was about 5pm and we were very eager to find the thing.
Goat man and his goats 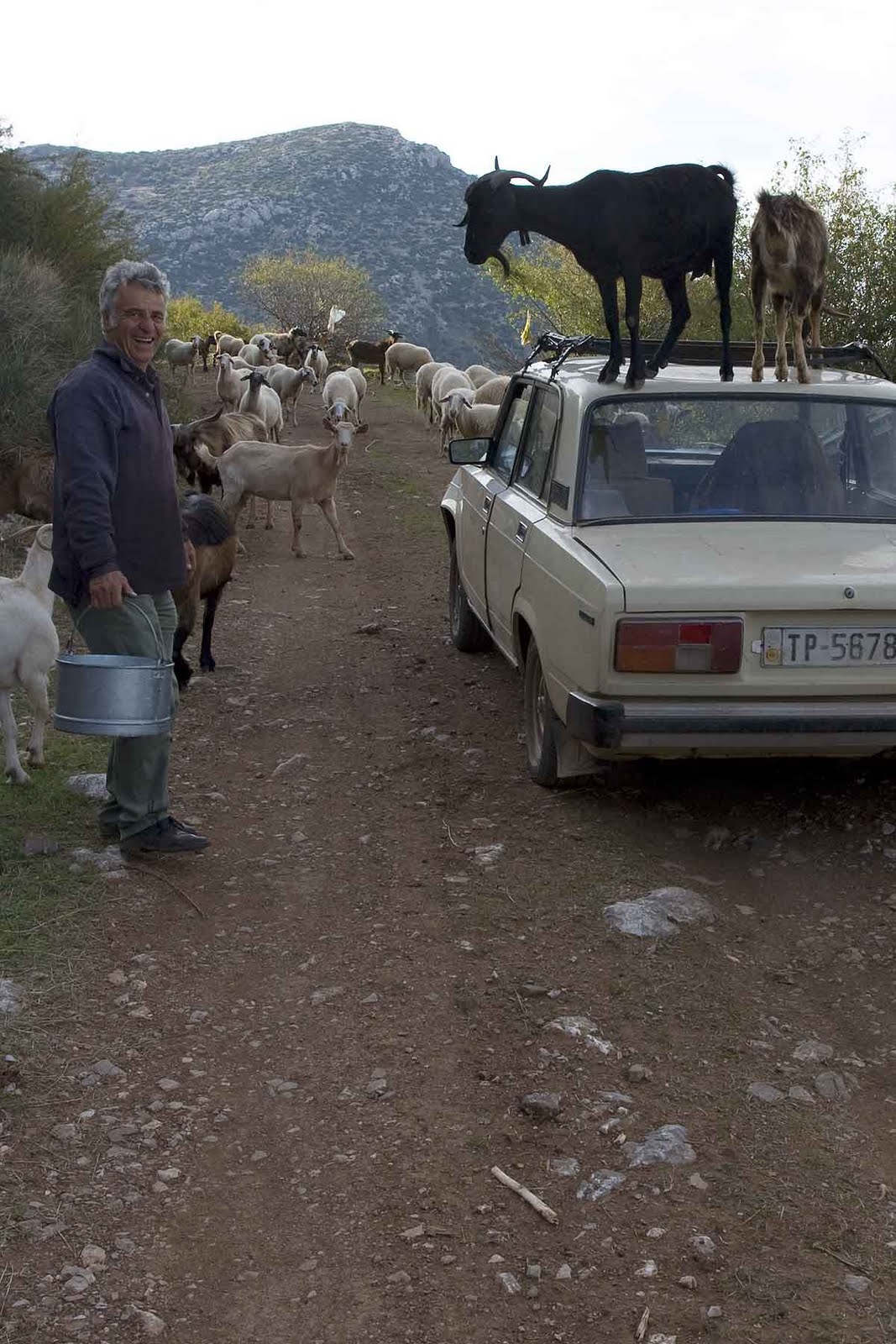 So off we set…again. Down another dirt/rock track until we found a gigantic car park. This time, we thought we had it! But no temple could we see. Instead there was another little old man picking herbs by the side of the car park, so John approached for directions. This time it was a combo of map pointing, miming and broken German! This guy seemed to think we were about 22 km from our destination! Bugger! By this time it was 6pm so we decided to pack it in for the day and find some accommodation for the night. We put in another village, Andritsena, into our trusty GPS (which is actually really good at getting us out of places!) and set off. We found a hotel, ironically titled Epicurean Apollo Hotel (!!) and breathed a sigh of relief – 7:15pm and we had a place to rest our heads for the night. All of our confusion for the day was erased when we looked at a map on the wall of our room which showed that there WAS a temple at the top of the mountain guarded by our little goat herder, just not the one we were after! Our google map had actually thwarted us. 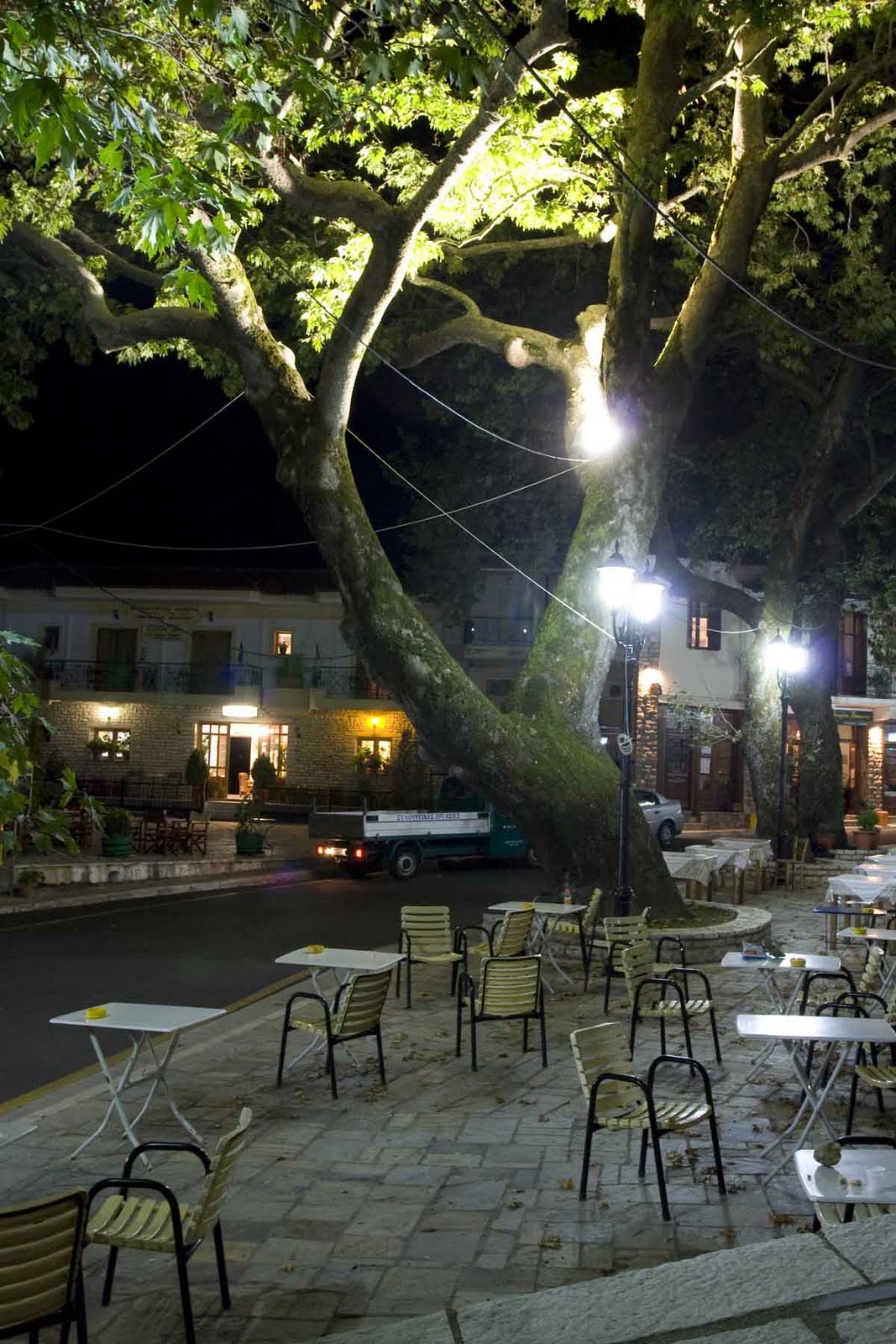 Andritsena and our hotel in the background, left
The temple was only 13kms away from our hotel and the next morning we set out – determined not to let the endless search defeat us. We had actually passed the turn off to the temple the evening before on our way to Andritsena, it’s just that the sign was FACING THE OTHER DIRECTION AND WE DIDN’T SEE IT!!! (Don’t get us started on the signage in Greece – it’s nearly as bad as Italy! Australia ROCKS for decent, clear, logical signage!!) Oh, and did we mention that in the country that not only likes to spell things many different ways, they also like to give things different names? So this temple was also known as Temple of Bassae and the Temple of Vassae. Confusing much?! 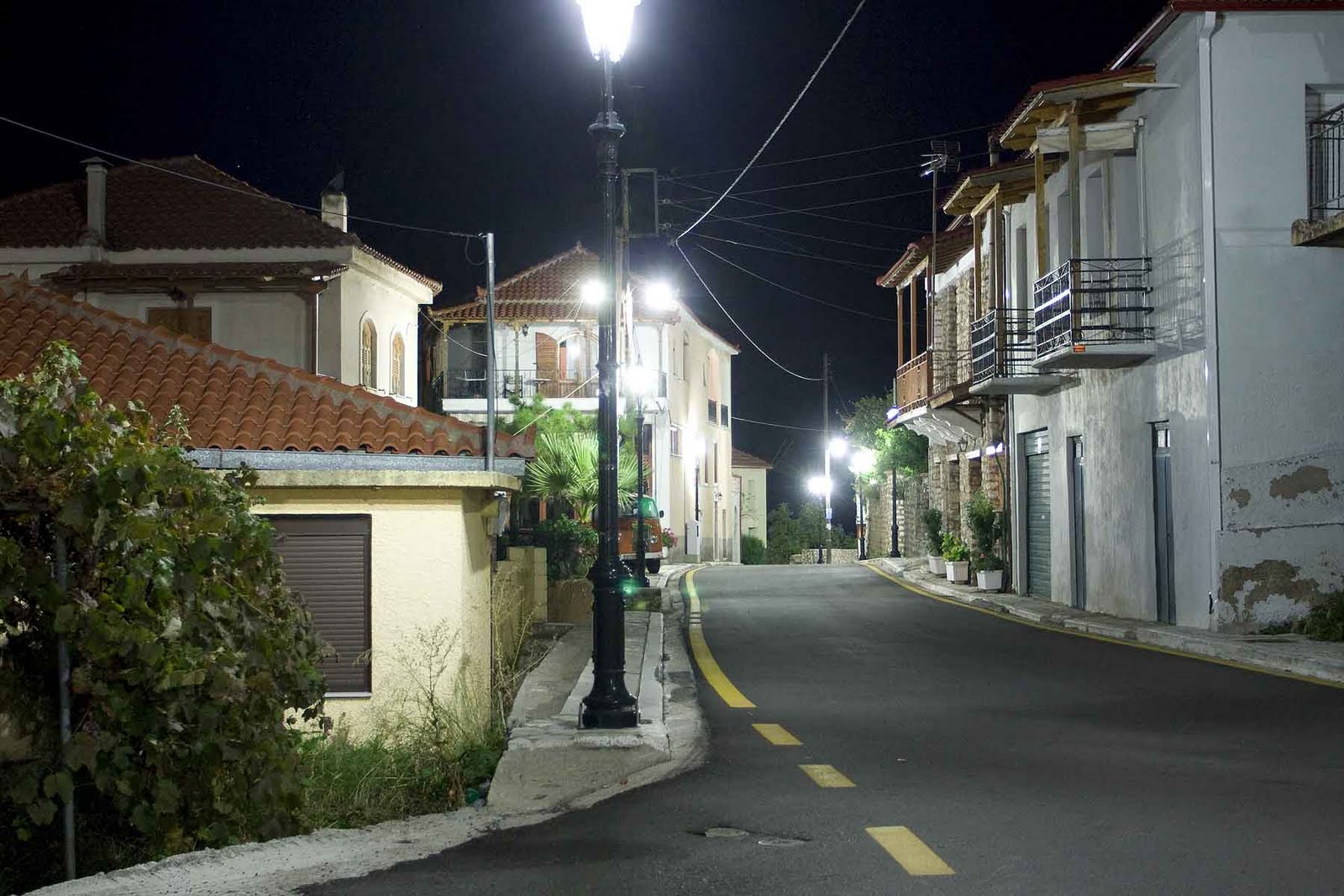 Andritsena street
We did find the magnificent Temple of Epicurean Apollo…and it was covered with a tent!! (All to keep it from disintegrating further – but it was still stunningly beautiful and terribly impressive). 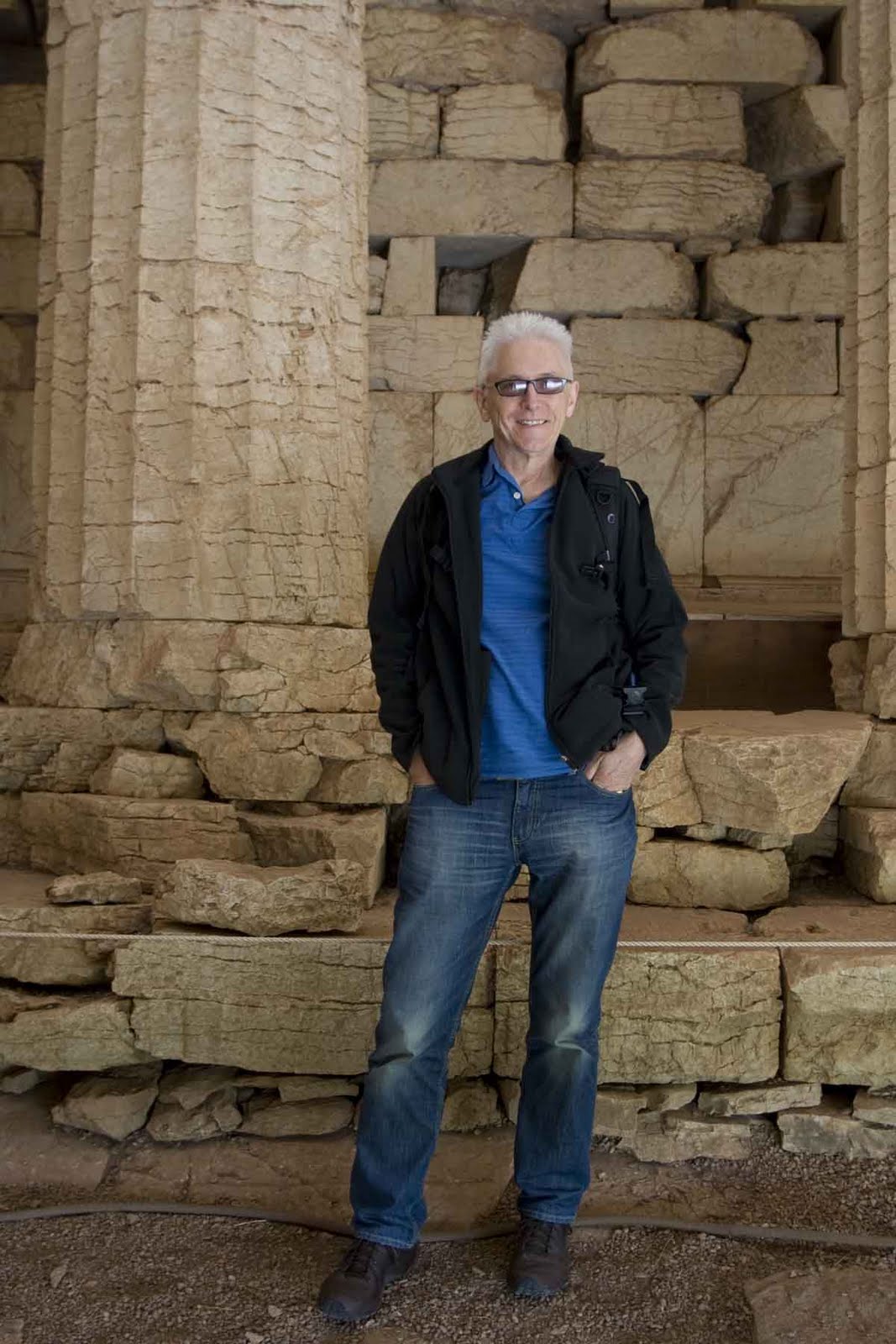 John at the Temple of Epicurean Apollo 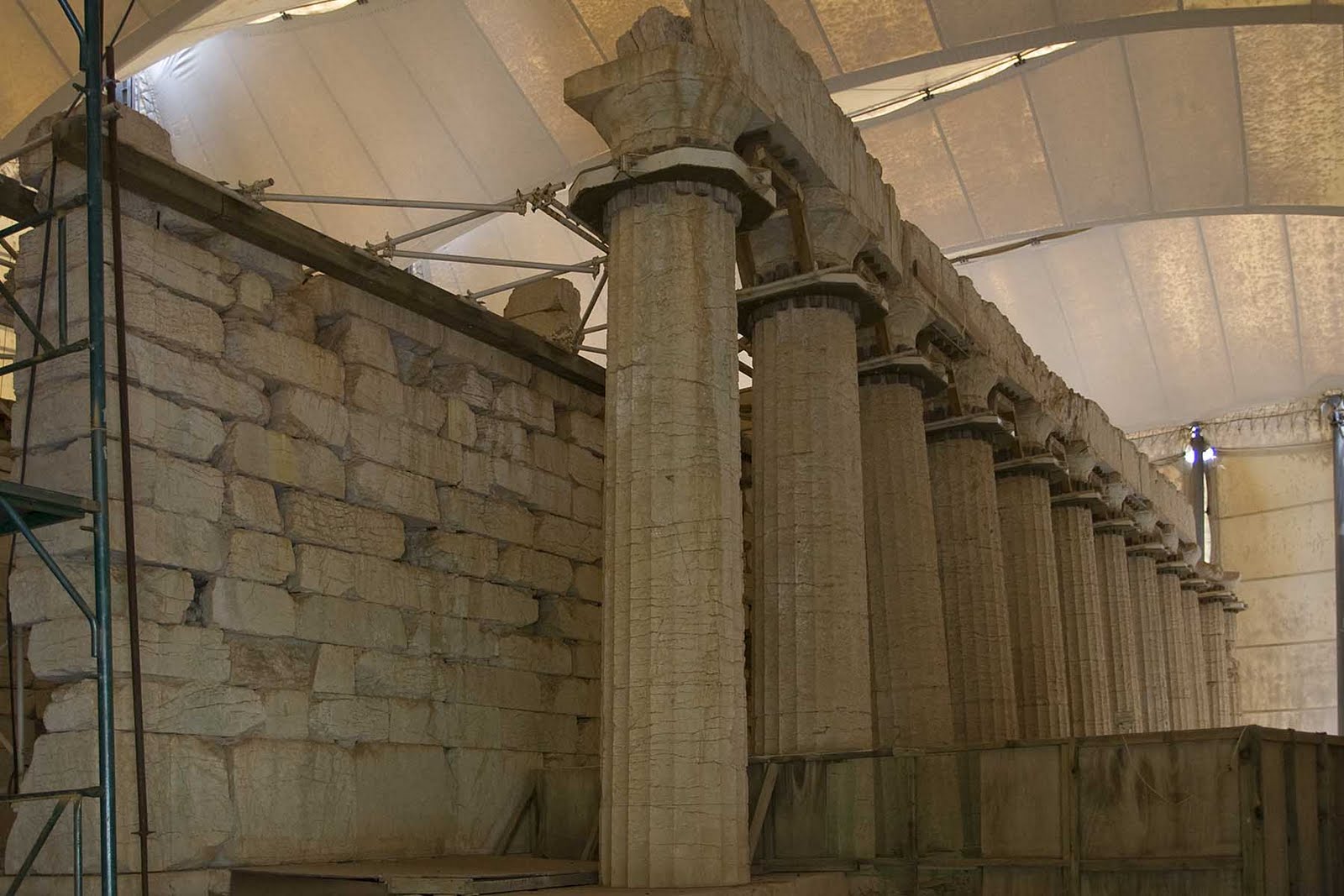 The temple in its tent!

2 Replies to “The Search for the Temple of Epicurean Apollo”