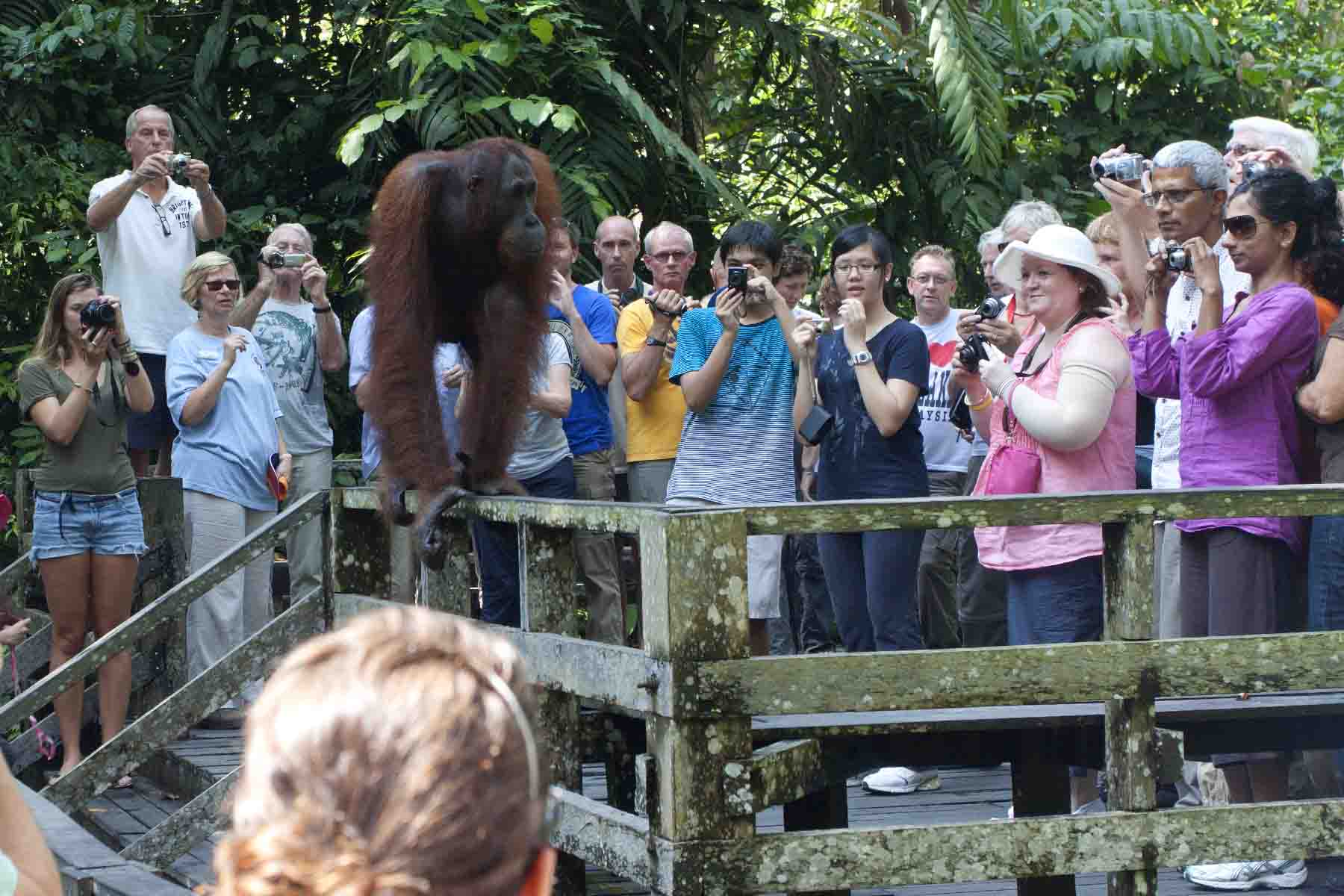 The orangutan with ‘tude’

We left Turtle Island at 7am and headed back to the dock in Sandakan. Our return trip took a little longer than the original due to having to stop a few times with a dodgy motor (sounded like another clogged fuel filter, but what would we know?). 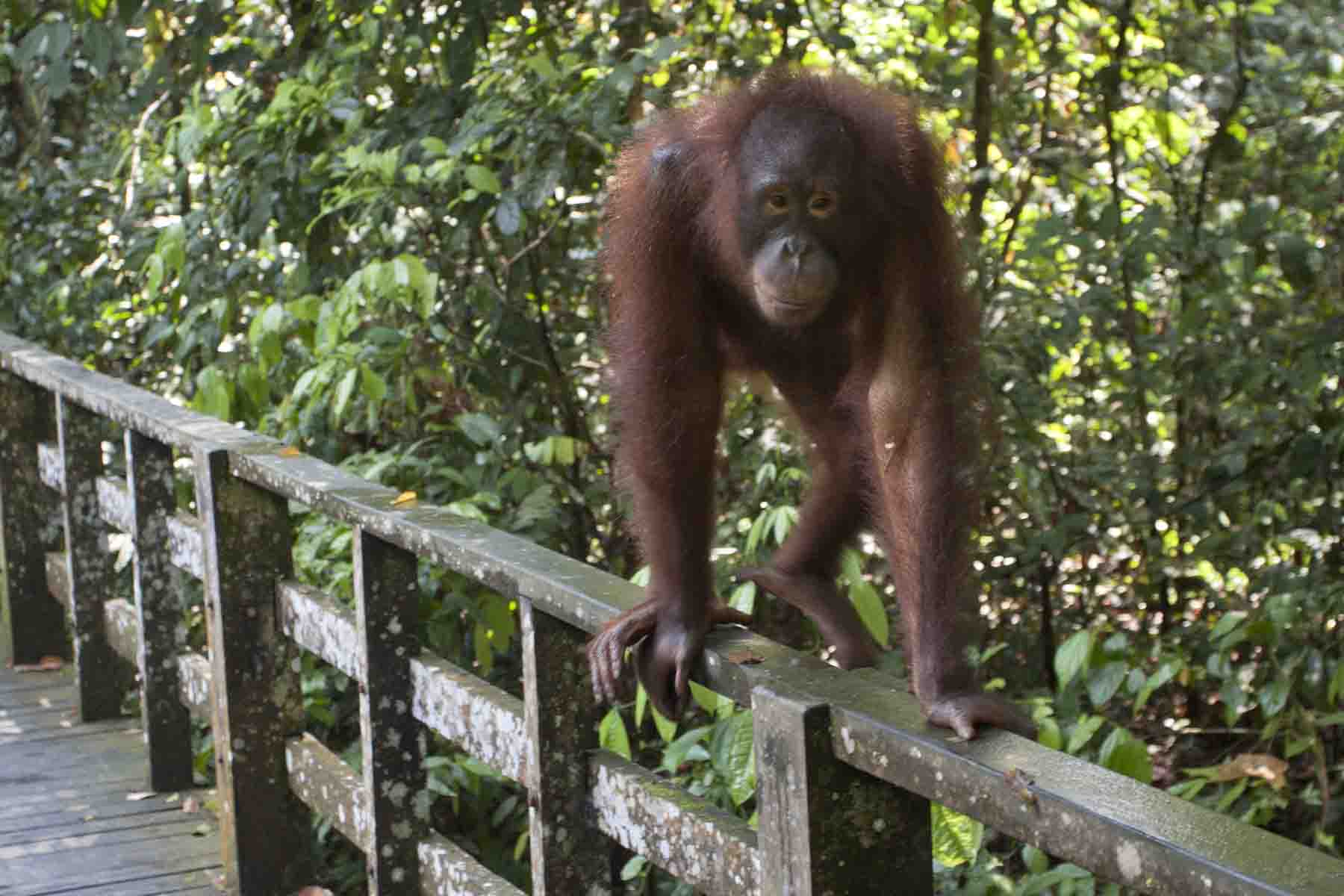 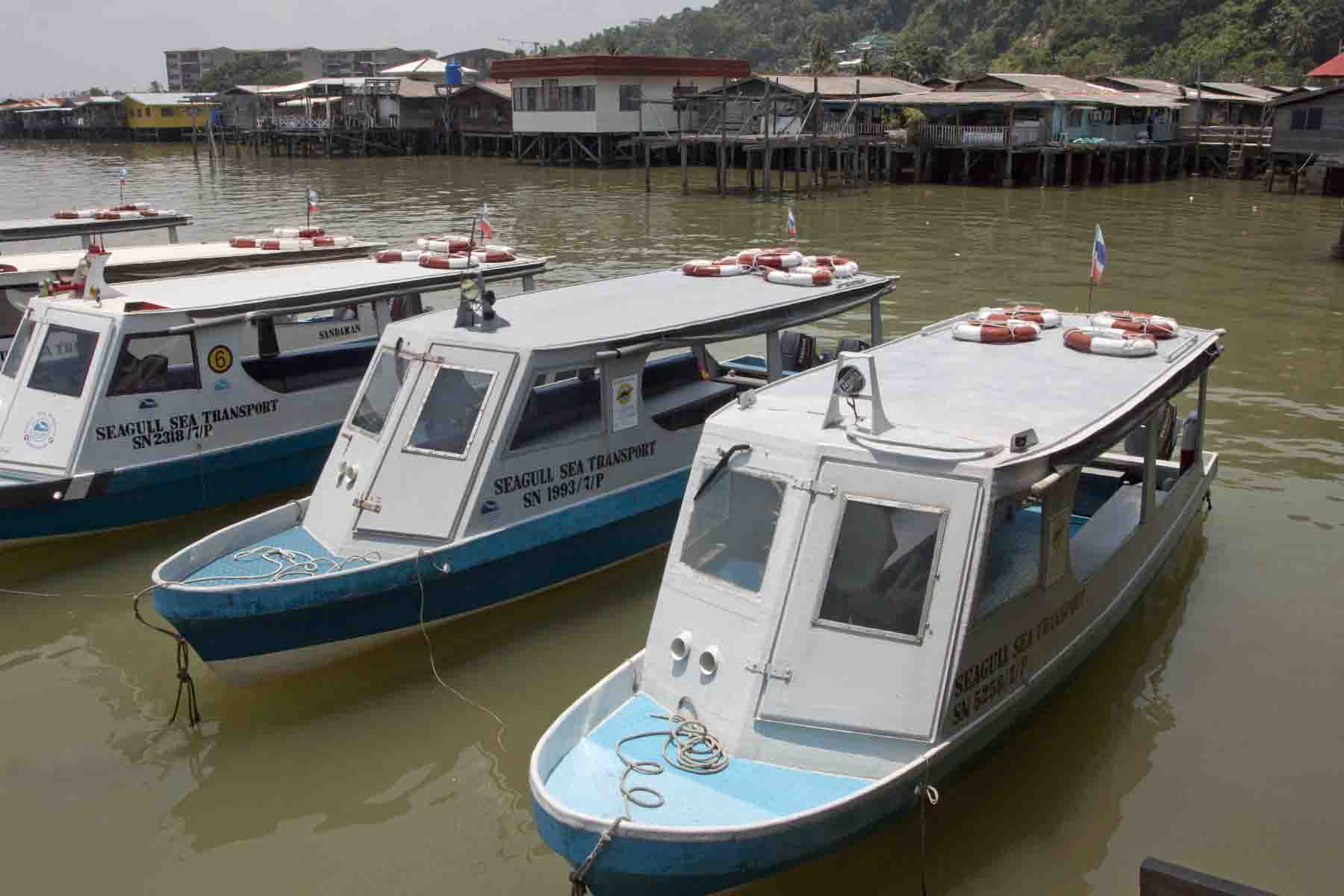 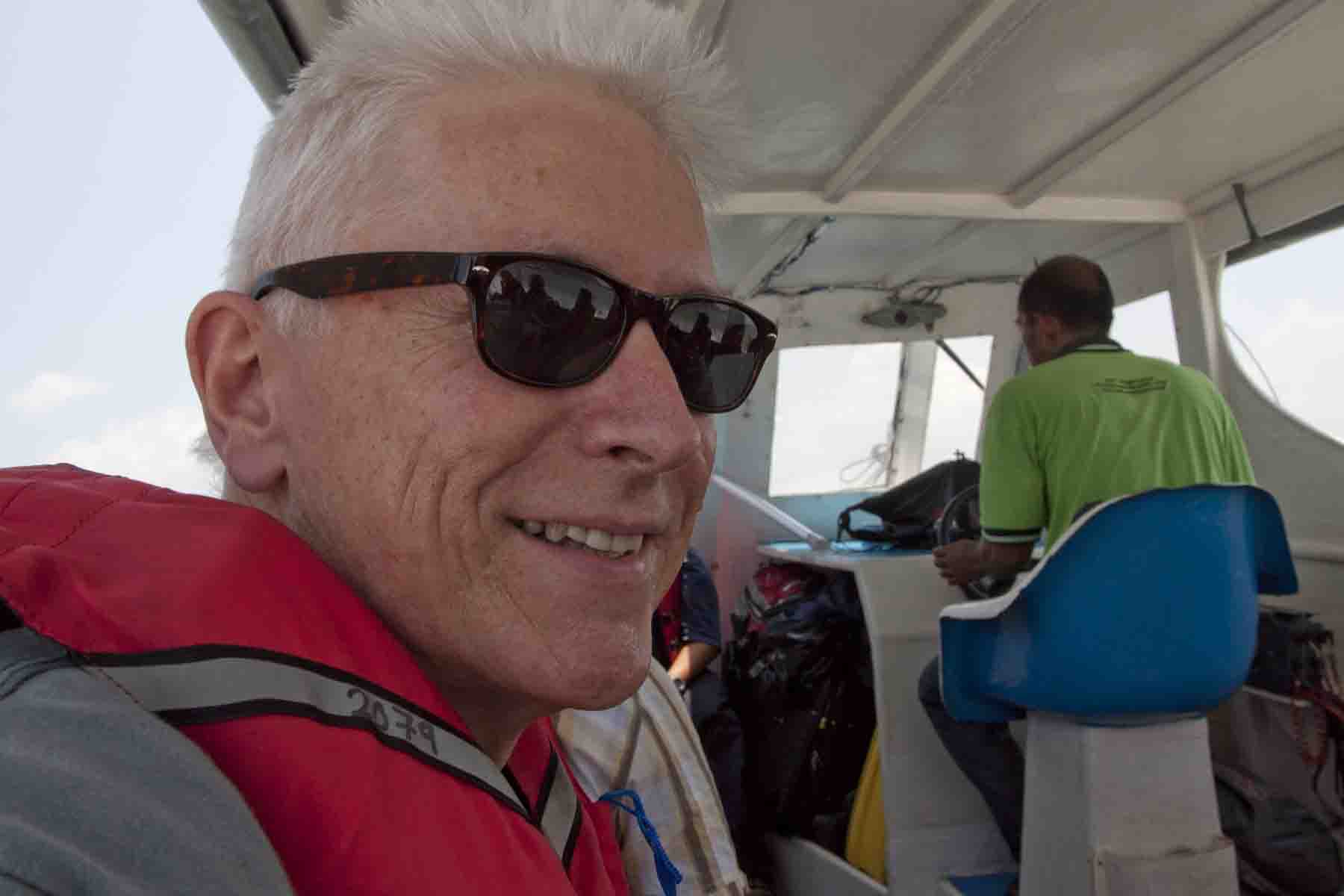 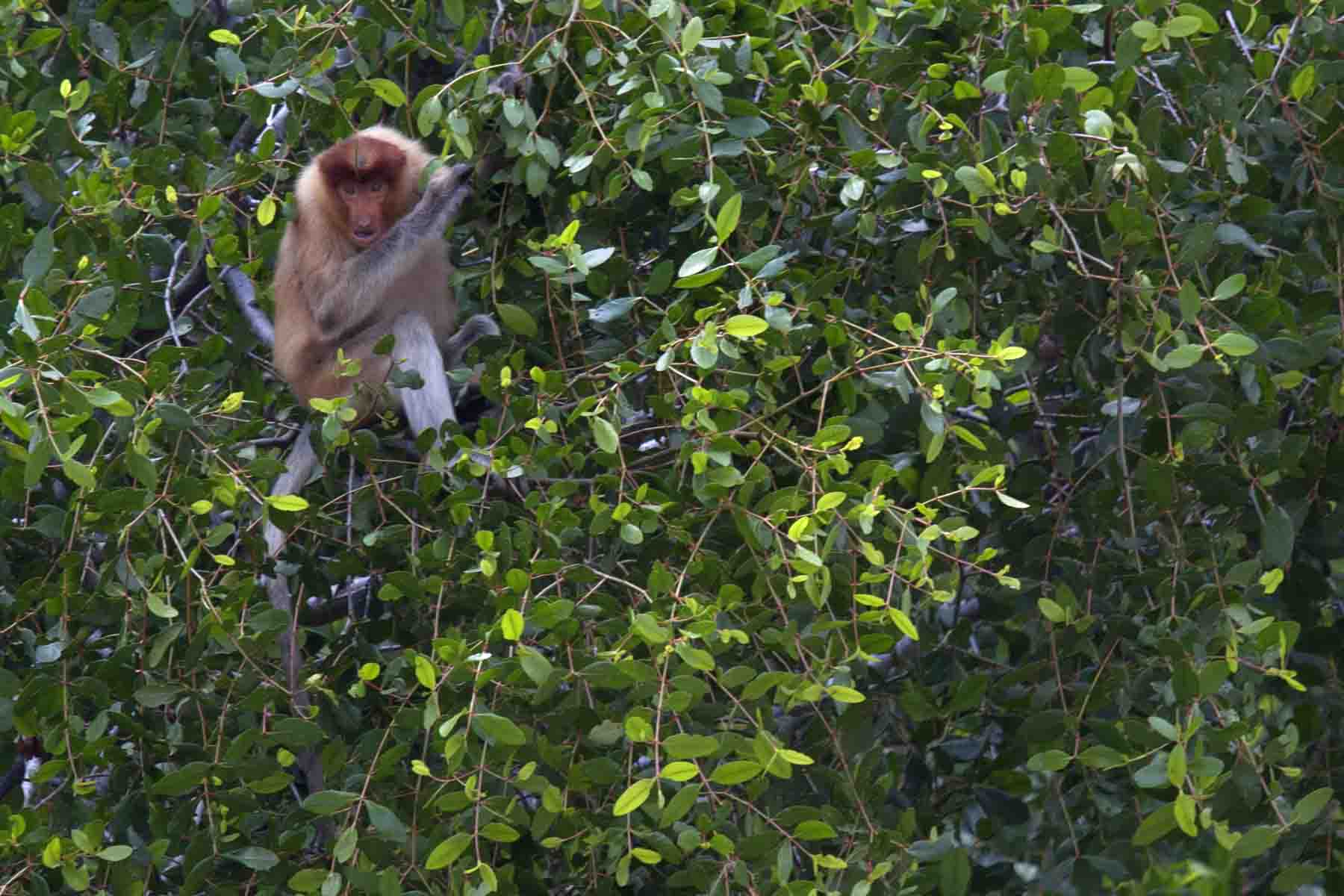 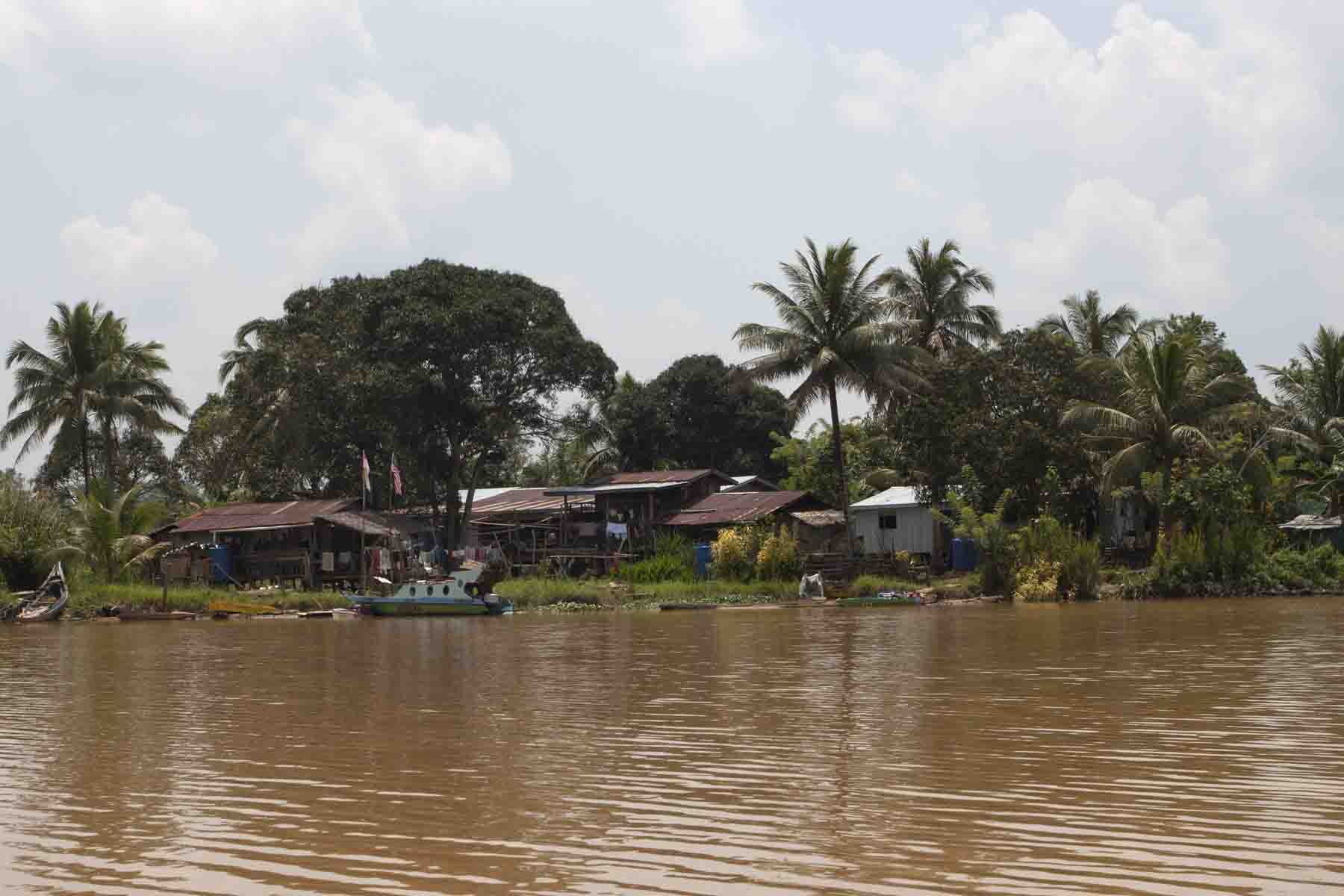 We disembarked and climbed aboard a mini-bus and headed straight to Sepilok Orangutan Rehabilitation Centre, about 20 minutes drive from the centre of town. This experience took us another step closer to our ultimate goal – to see an orangutan in the wild. These beautiful creatures had all been rescued – some from truly awful situations, others from the damaging care of humans keeping them as pets. It’s now against the law to keep an orangutan as a pet in Malaysia, but there are some remote farmers who claim to have no knowledge of the law. Before going to the feeding station to observe a few of them breaking their fast, we watched a video made by a UK charity that raises funds to rehabilitate the orangutans. It was an emotional, but important film to watch. 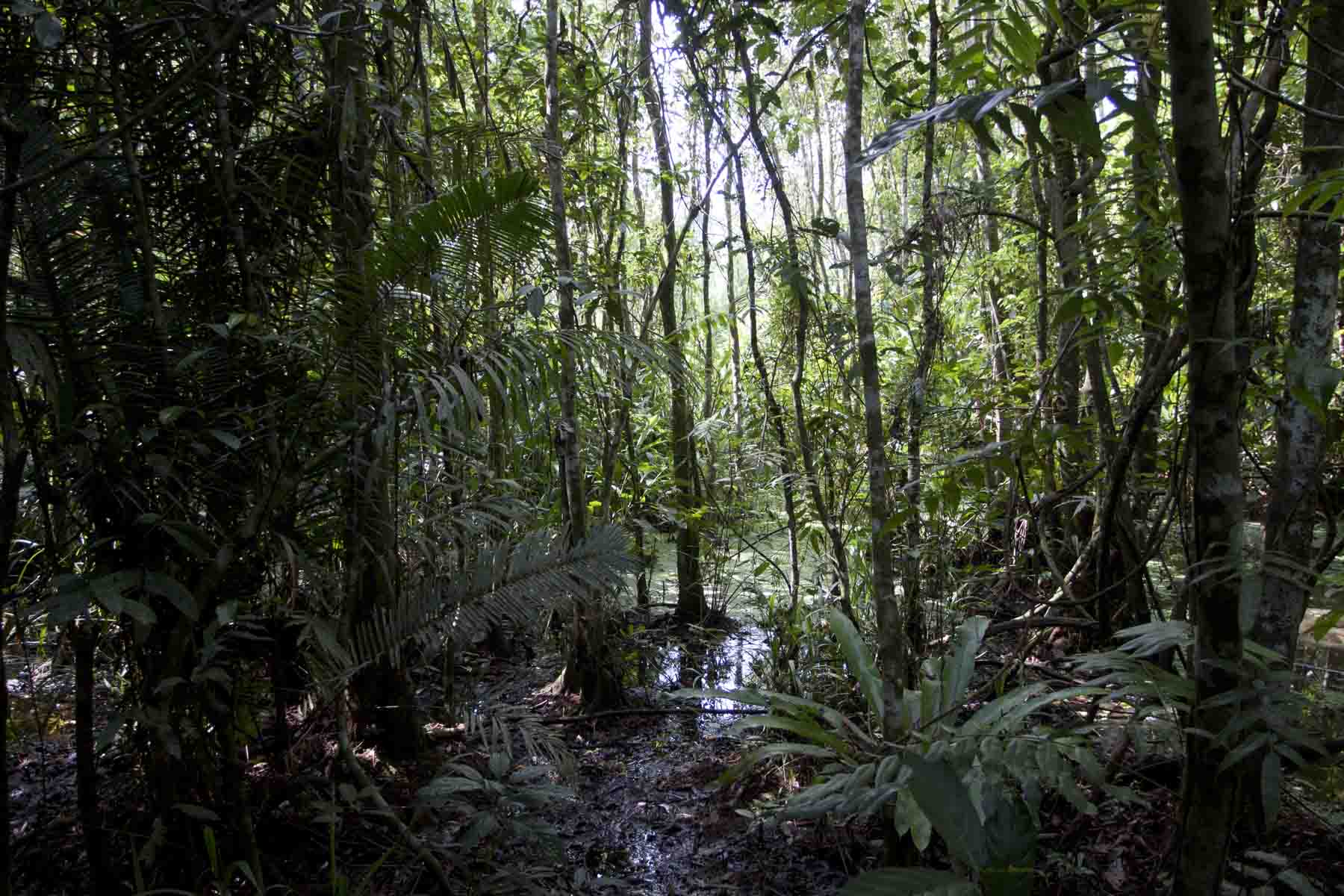 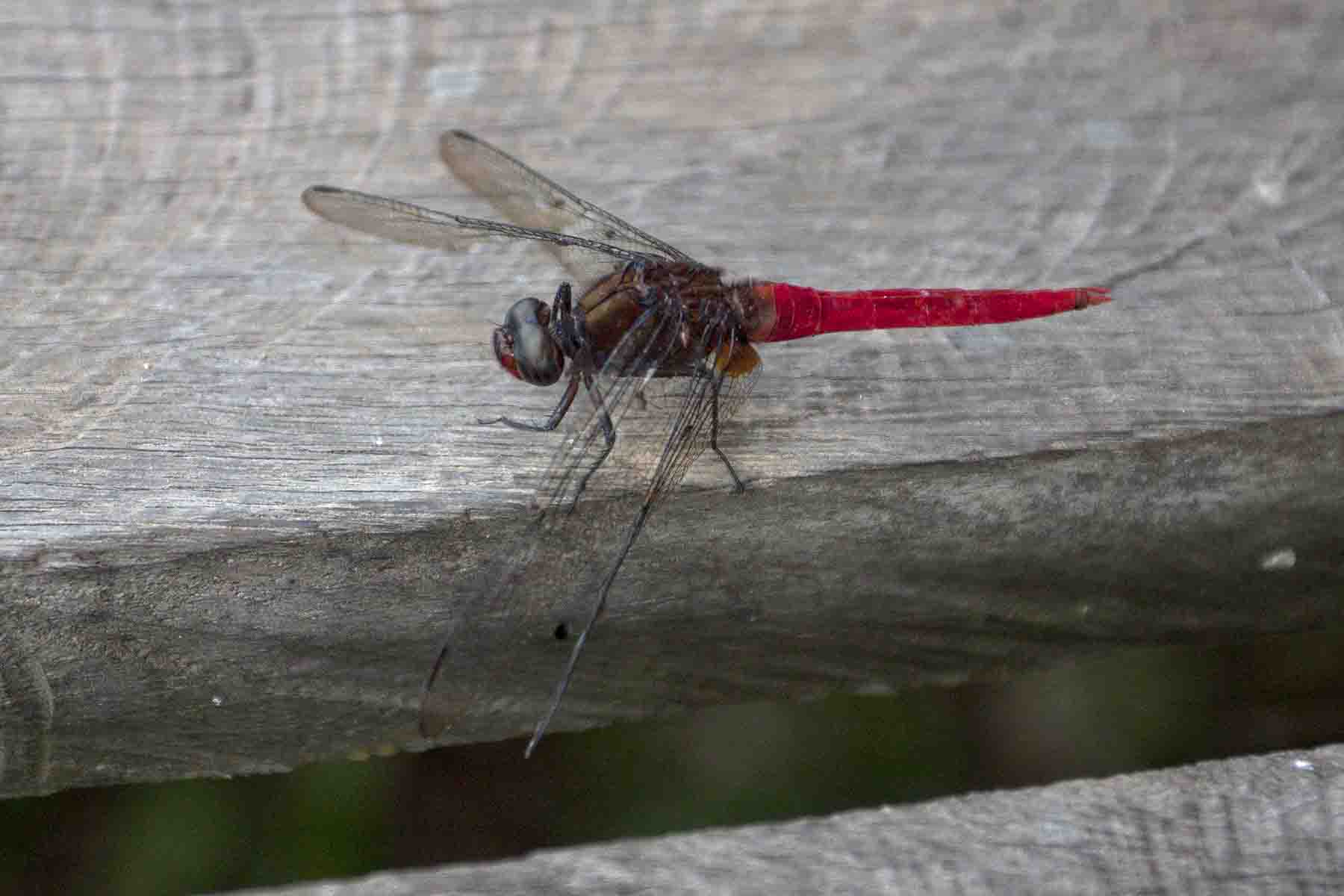 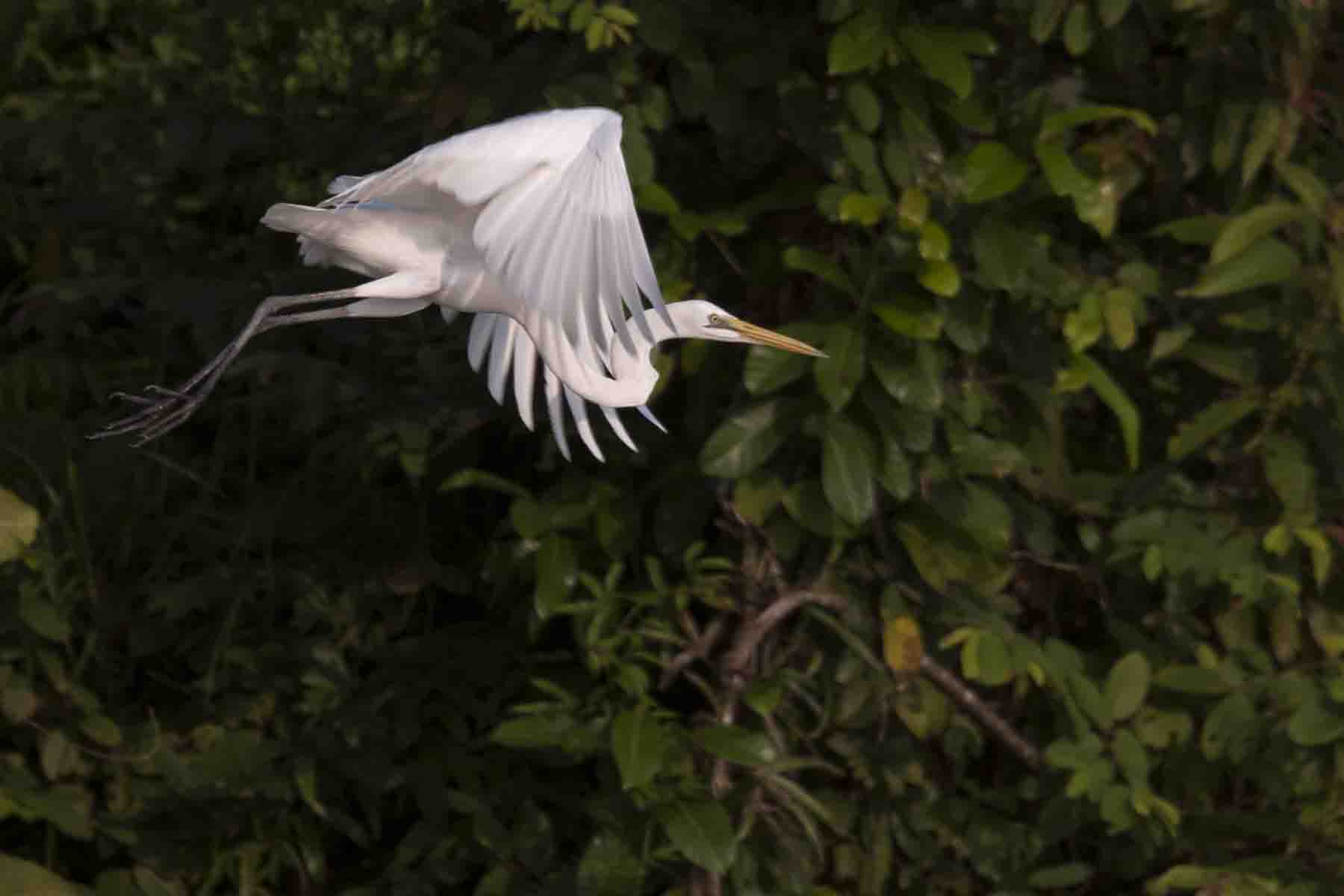 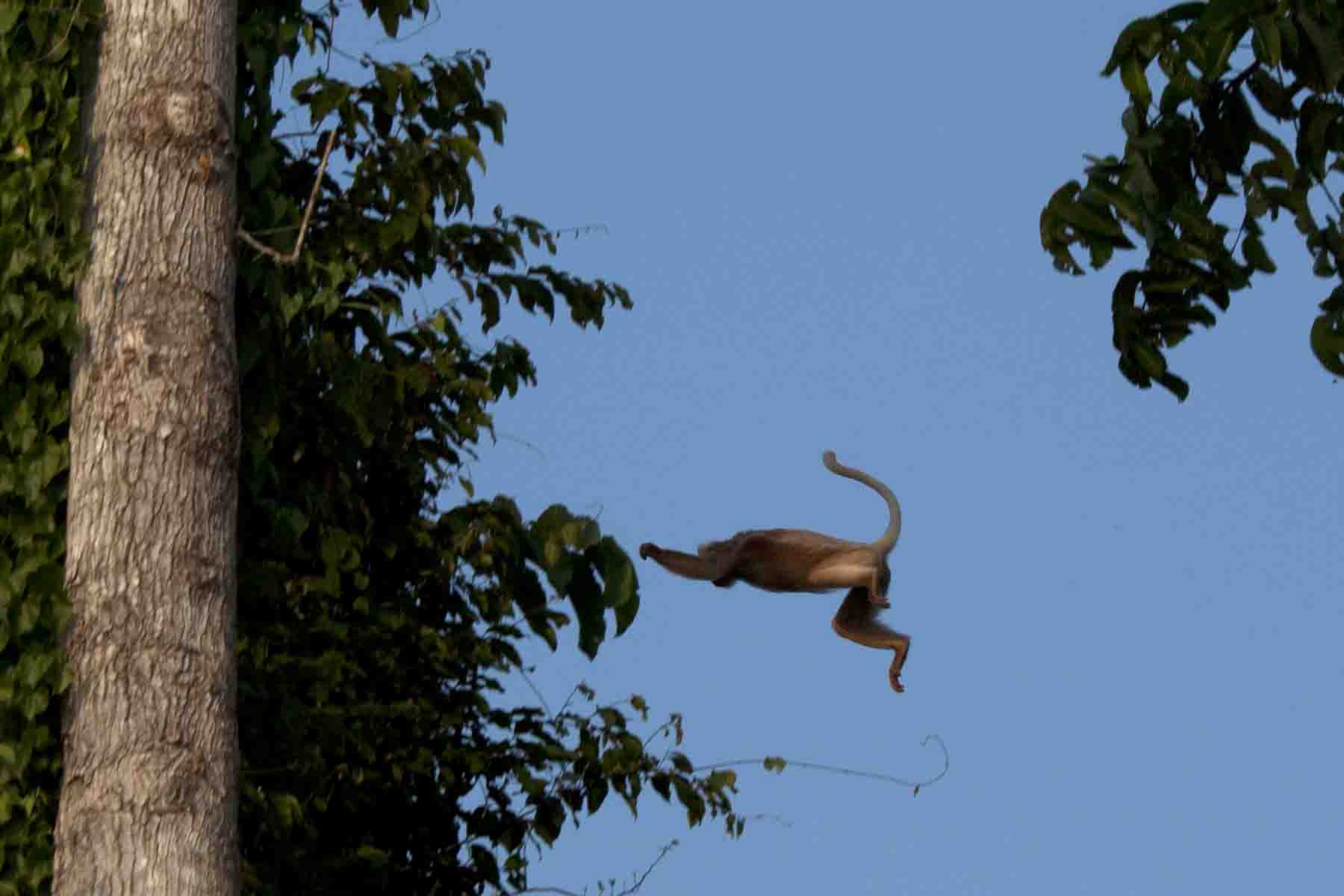 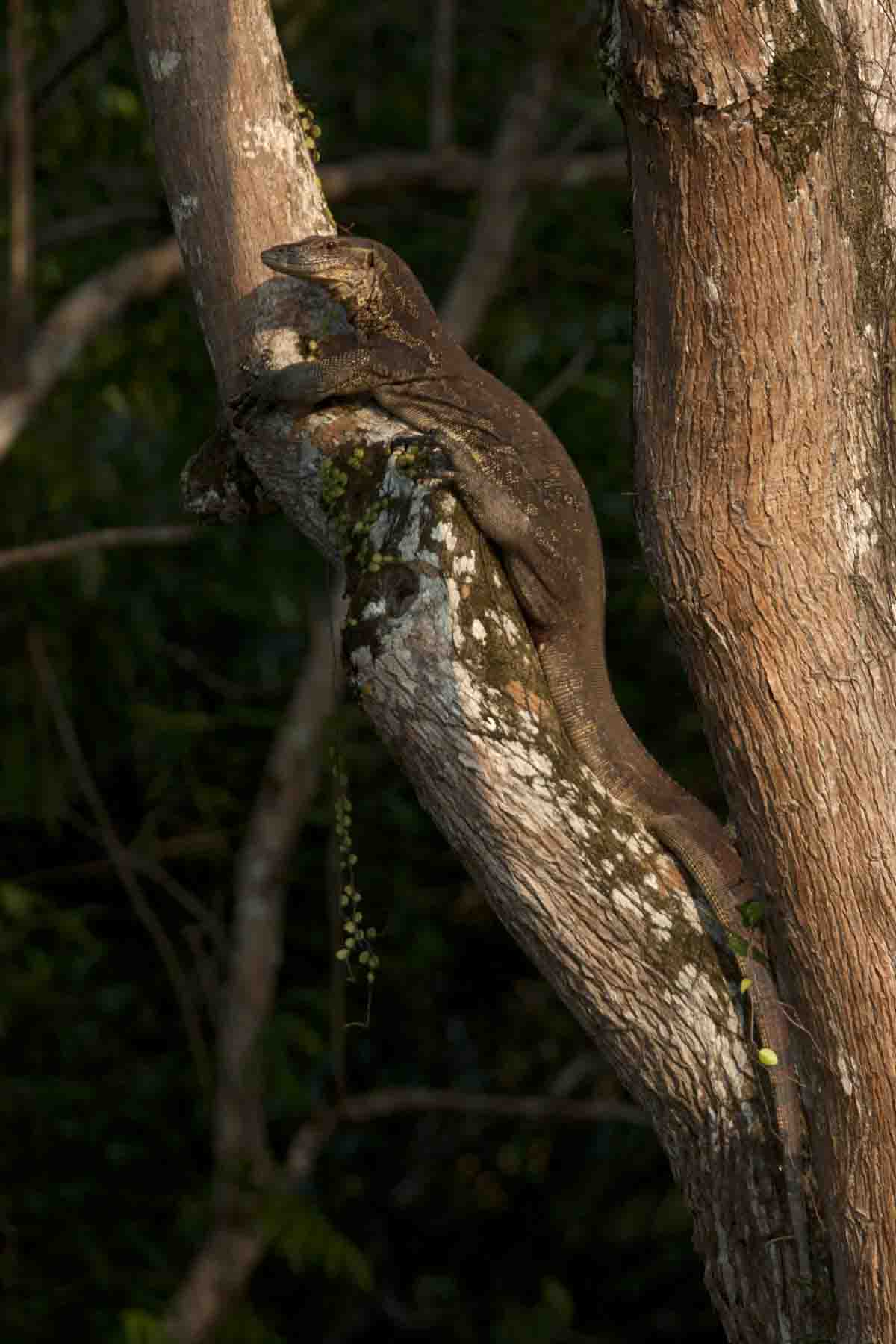 So with a tear in our collective eyes and our hands already reaching for our wallets, we obtained our camera permit and eagerly shuffled our way along the raised walkway to the feeding area. After about 20 minutes of staring intently at the foliage, looking for large, dark shadows, there was a murmur along the crowd of spectators. All heads turned to our left and the people parted like Moses was in the house. A young male was ambling along the wide railing of the viewing platform amongst us. He was so comfortable and sure of himself. So sure that he sat down and proceeded have a bit of a fiddle before continuing his journey through the crowd before heading to the raised feeding platform in the trees where a ranger was waiting with baskets of fruit for breakfast. Our first close up and “real” orangutan experience was a real winner, and he was a true showman. He was later joined by a female of similar size and then a little one, who appeared to have only just mastered the climbing gig. 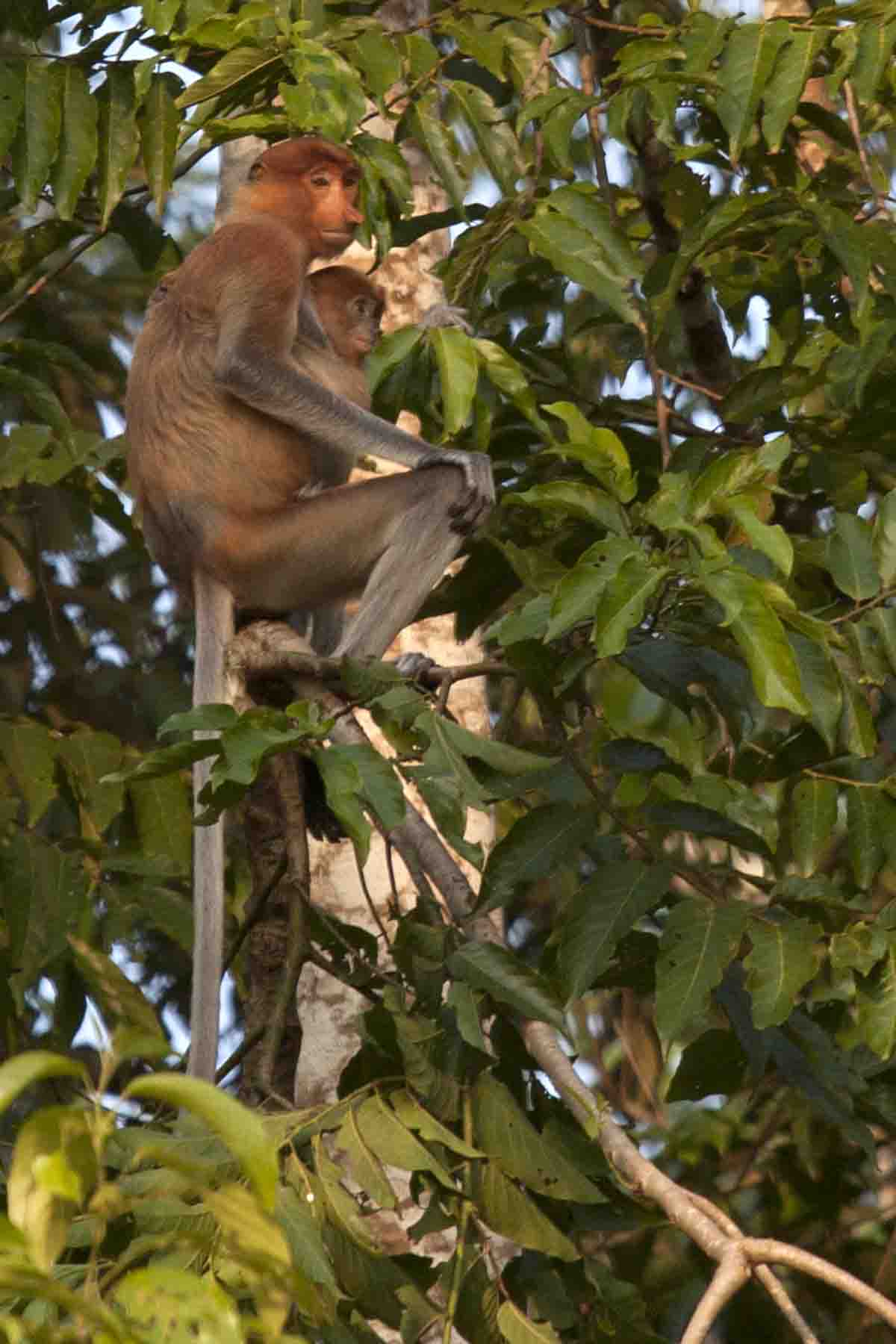 …And ready to leap into action 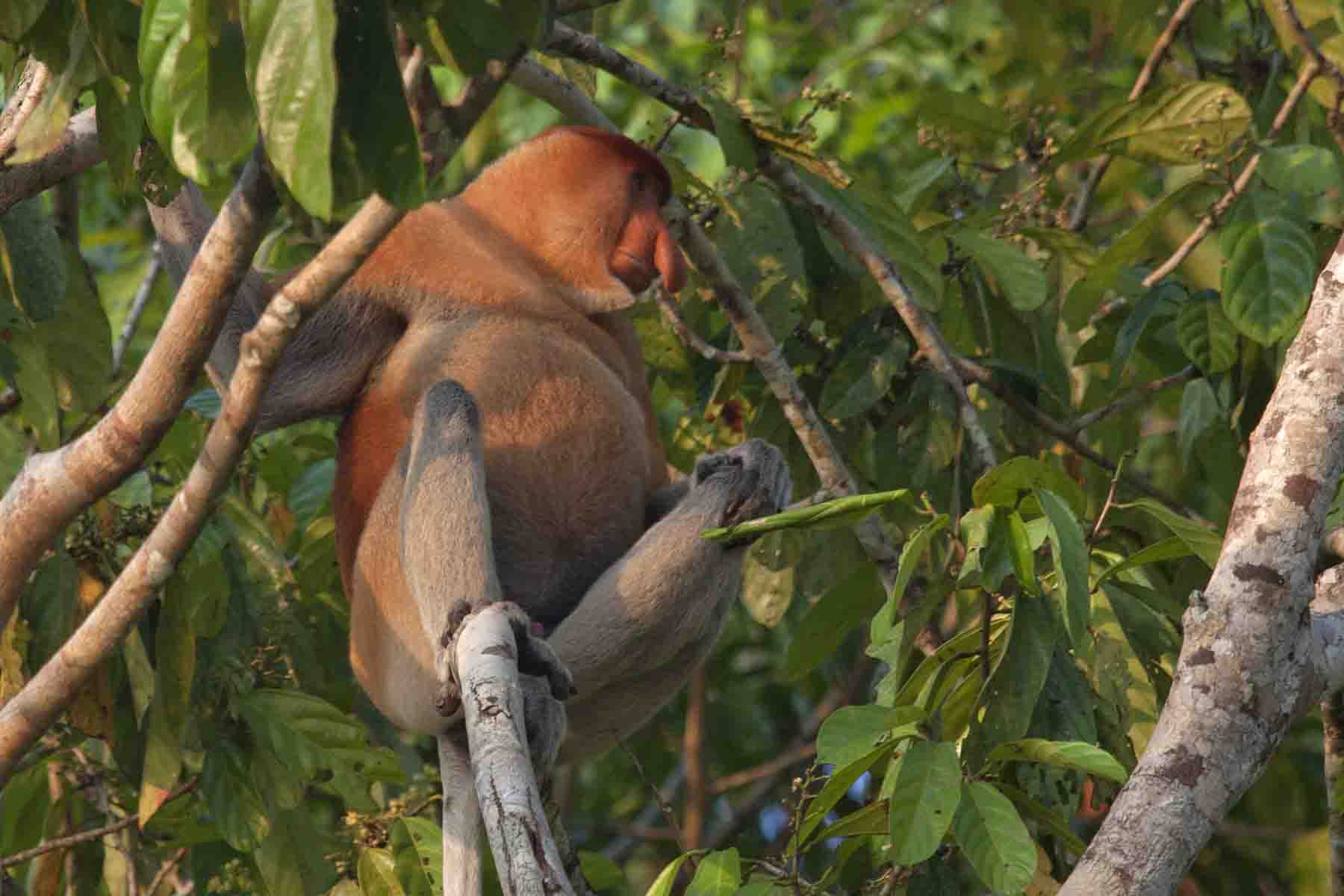 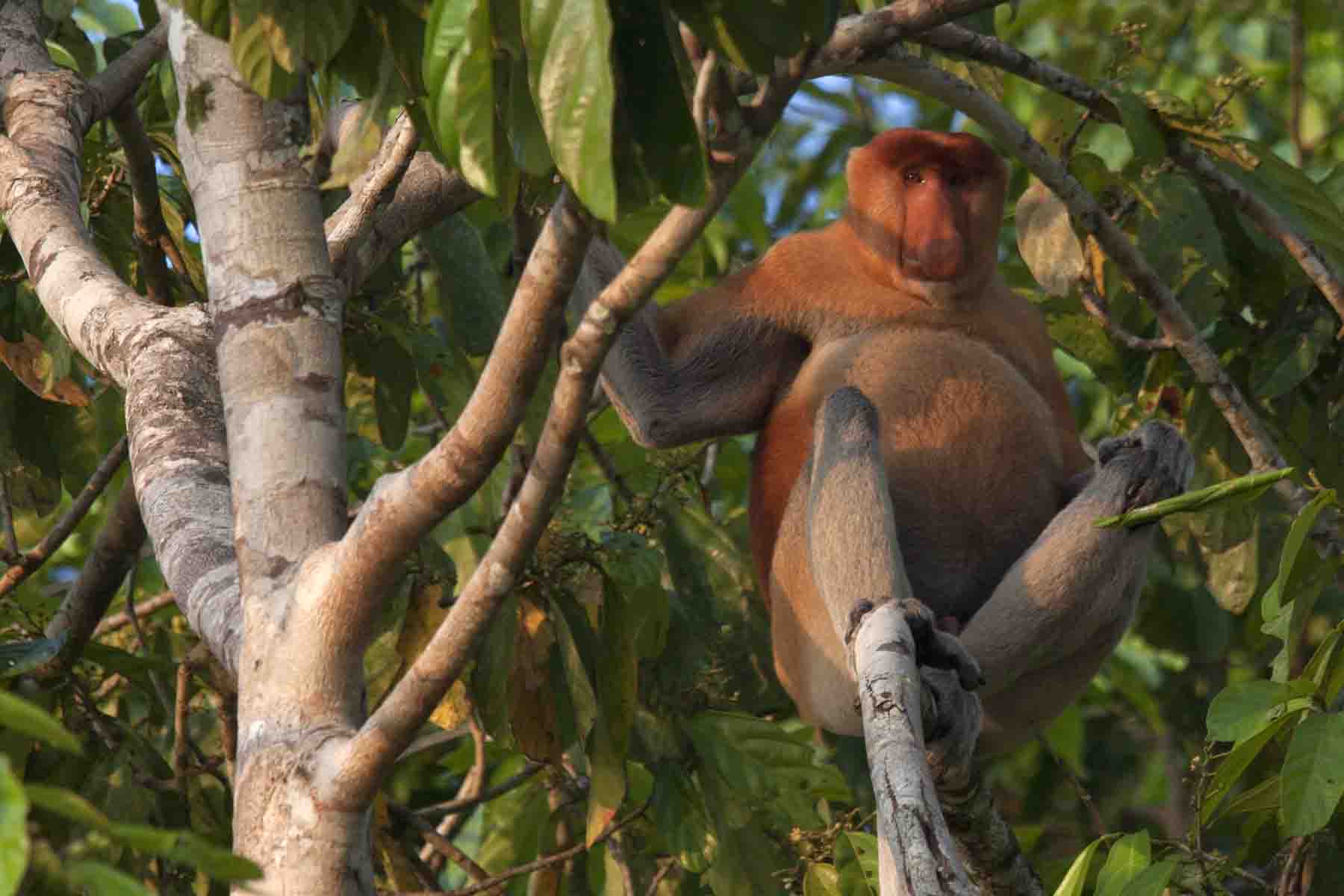 It’s freaky how much they look like old men! 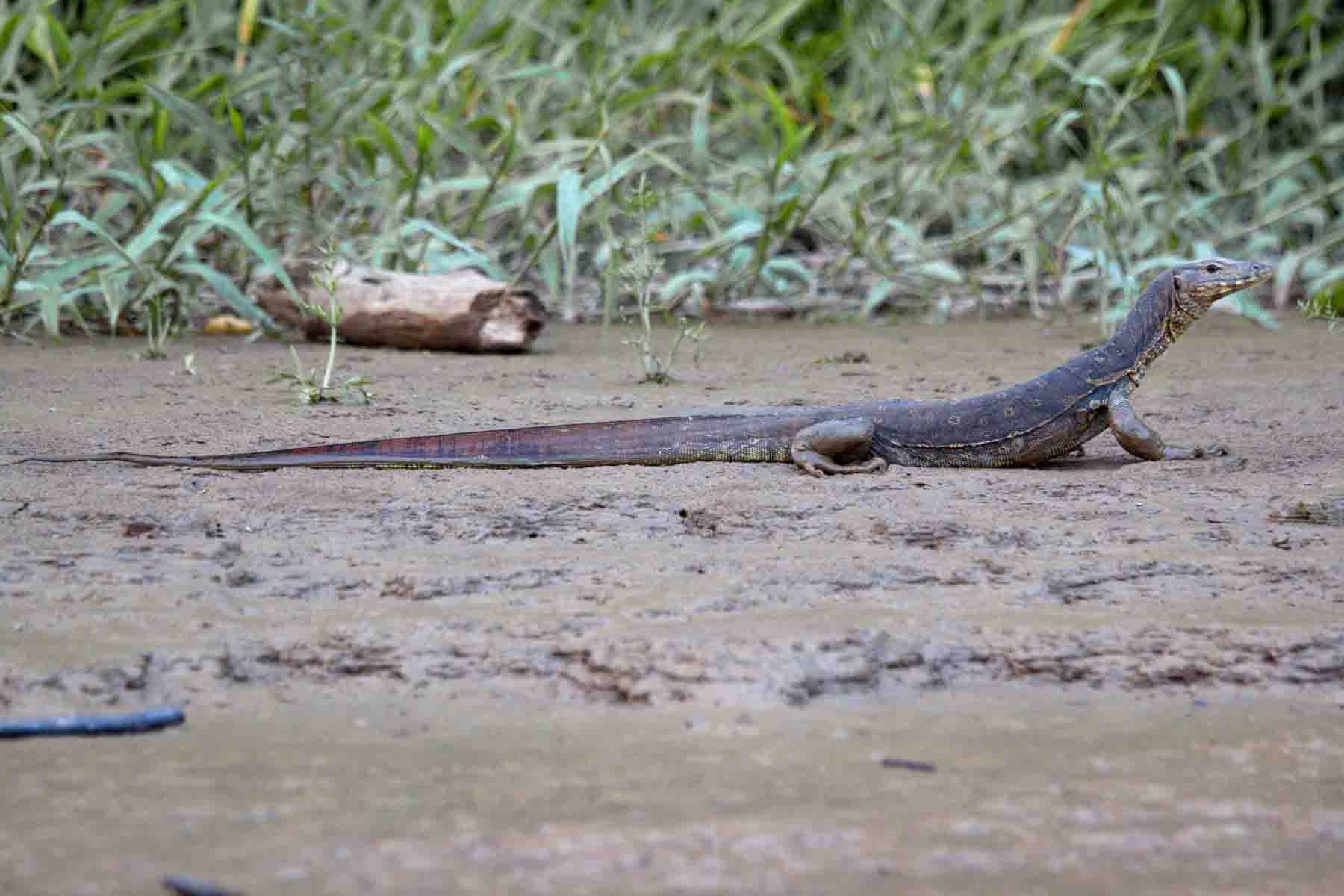 After standing in the sun for about half an hour, we decided to head back to the meeting point. Our guide seemed surprised that we didn’t want to stay longer, but we were hot and thirsty. As we went around the corner, another ranger was striding towards us telling us to be careful, and immediately behind him was a female making her way along the railing like the first guy. Only this one stopped directly in front of us and had a sit for a while, just looking at us, while we looked at her…with huge grins on our faces (although John’s grin was somewhat masked by the camera clicking madly!). When she’d had enough of watching us, she decided to follow the ranger, who had passed through a waist high gate. She easily could’ve just continued along the railing, but she was intrigued by the latch and sat for a while toying with it, before deciding that breakfast was more important and trundled off after the ranger. Such a memorable moment! 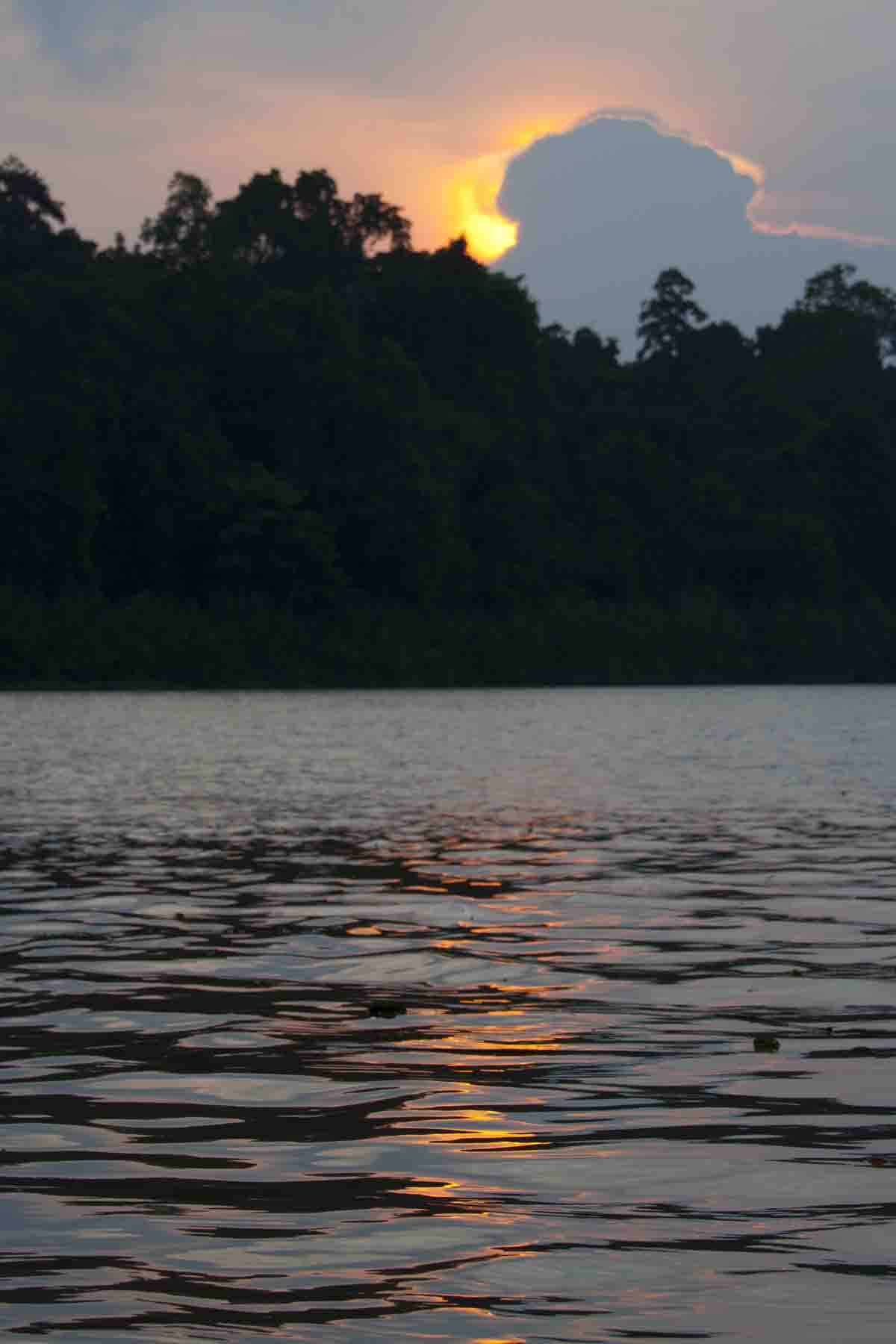 Sunset on the Kinabatangan River 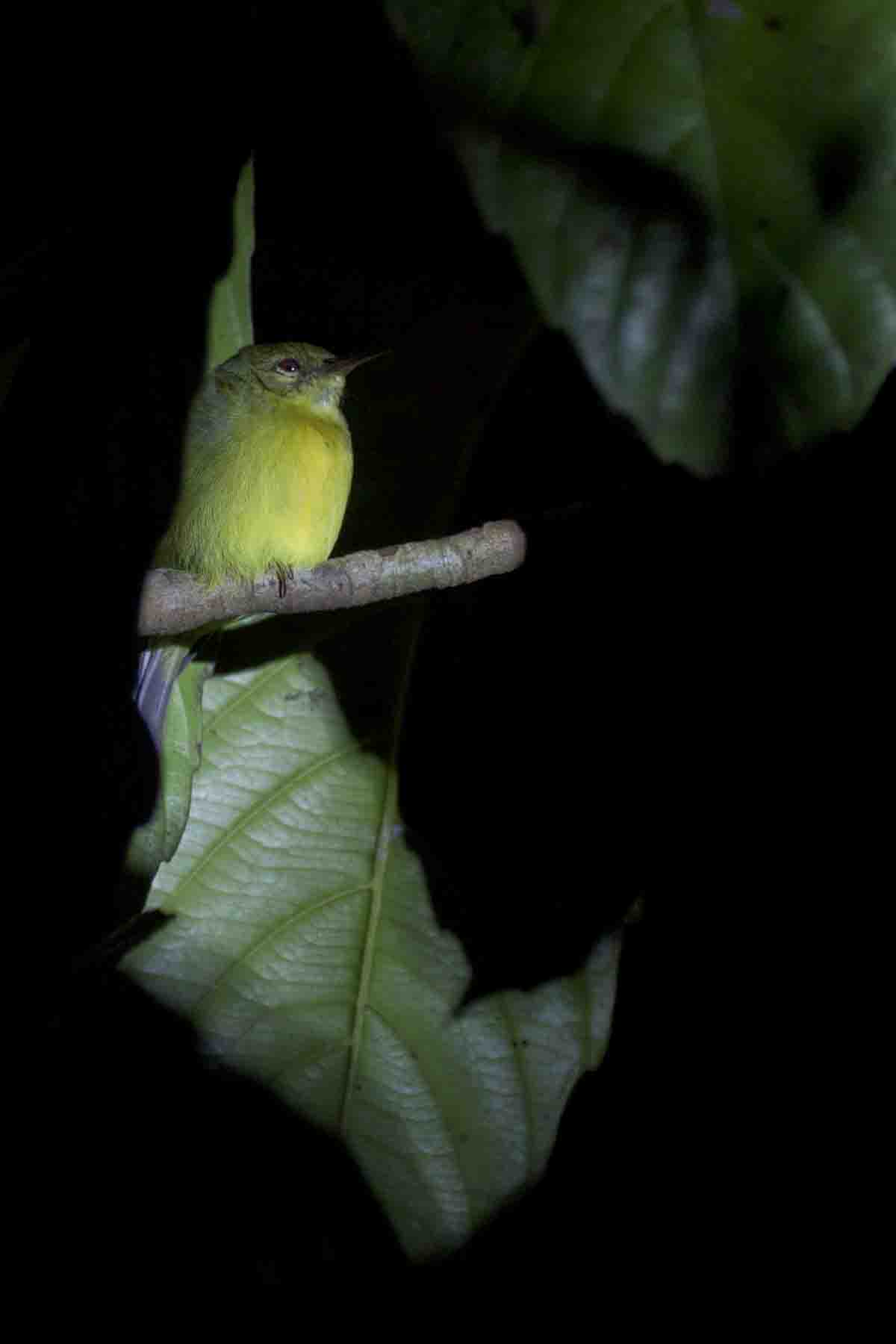 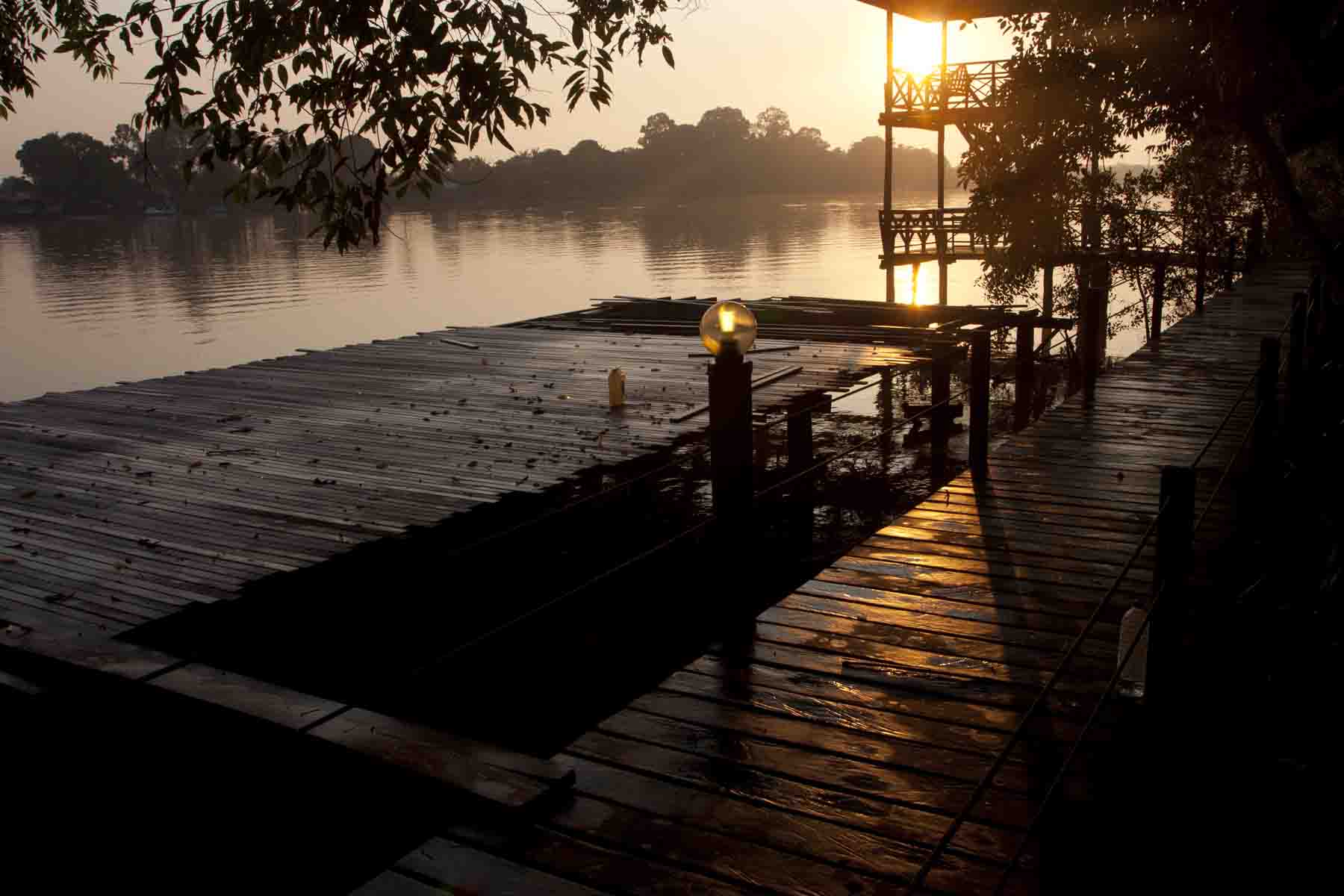 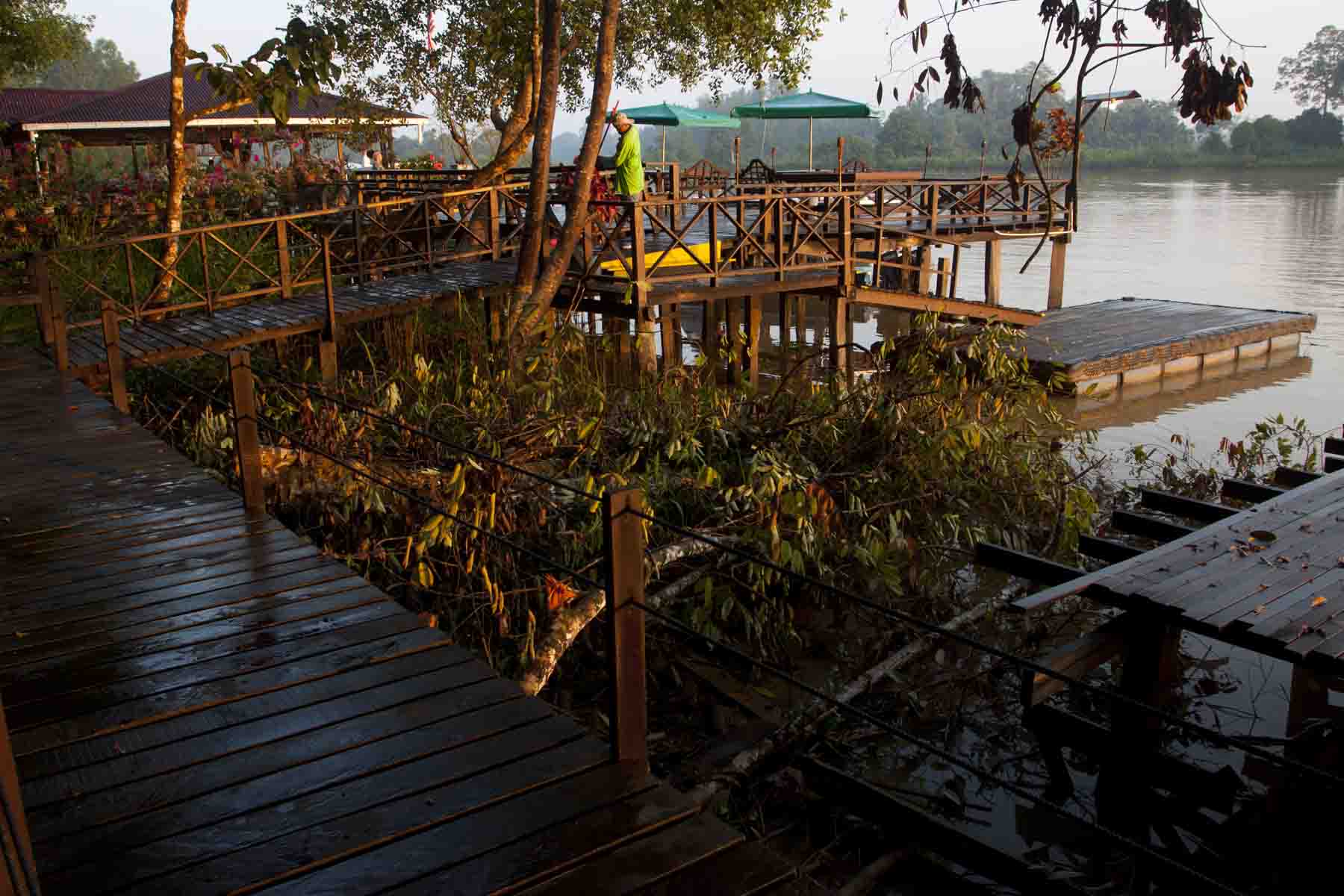 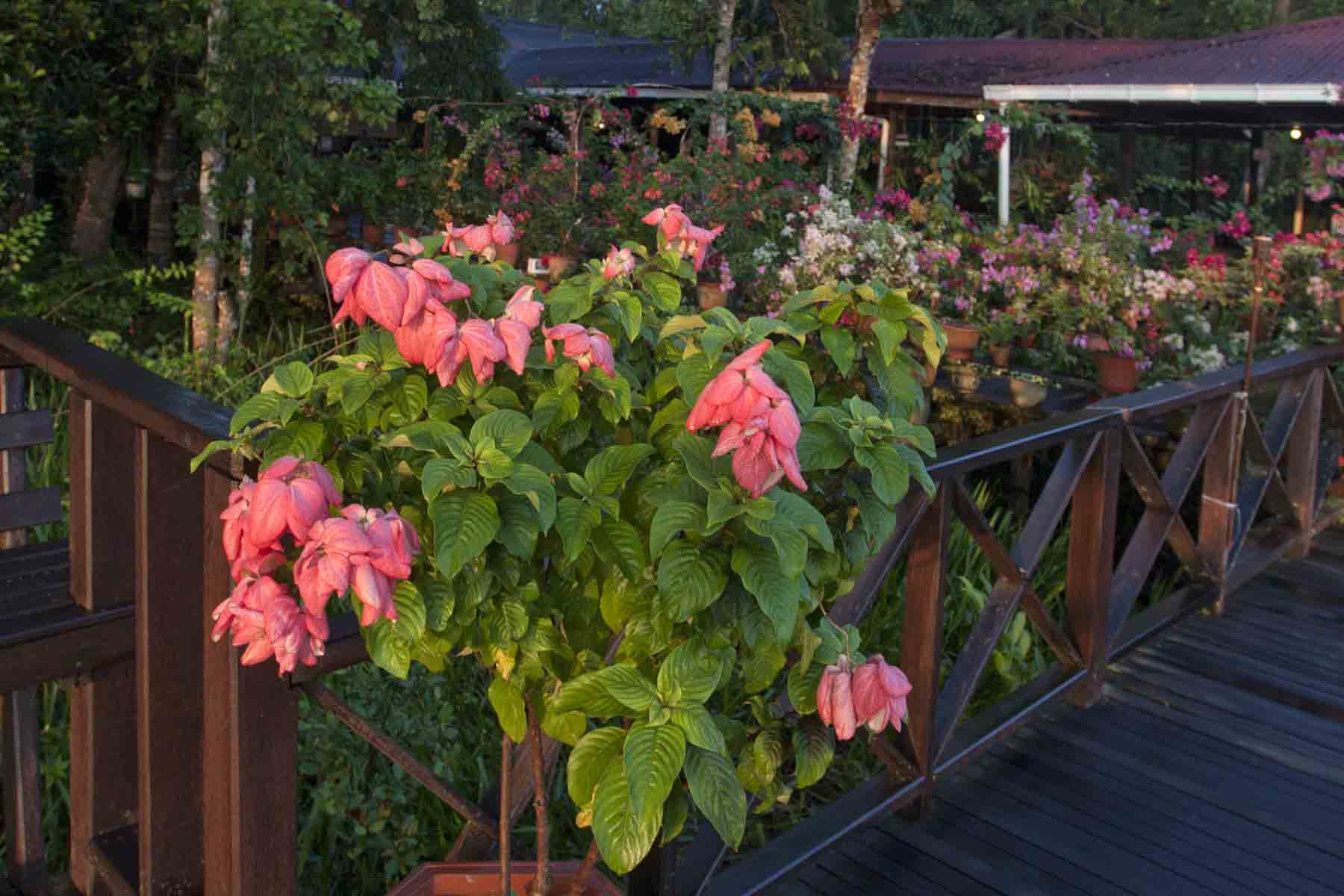 We drove back to Sandakan, collected our luggage from the lock up, and boarded a twin of the boat we had travelled in to Turtle Island for our journey up river (or is it down river?) to Abai Jungle Lodge. This was another hour trip, and we easily slipped into dreamy mode in the open water before we hit the mouth of the river, where we were all immediately alert looking for any sightings of wildlife – in or out of the water! 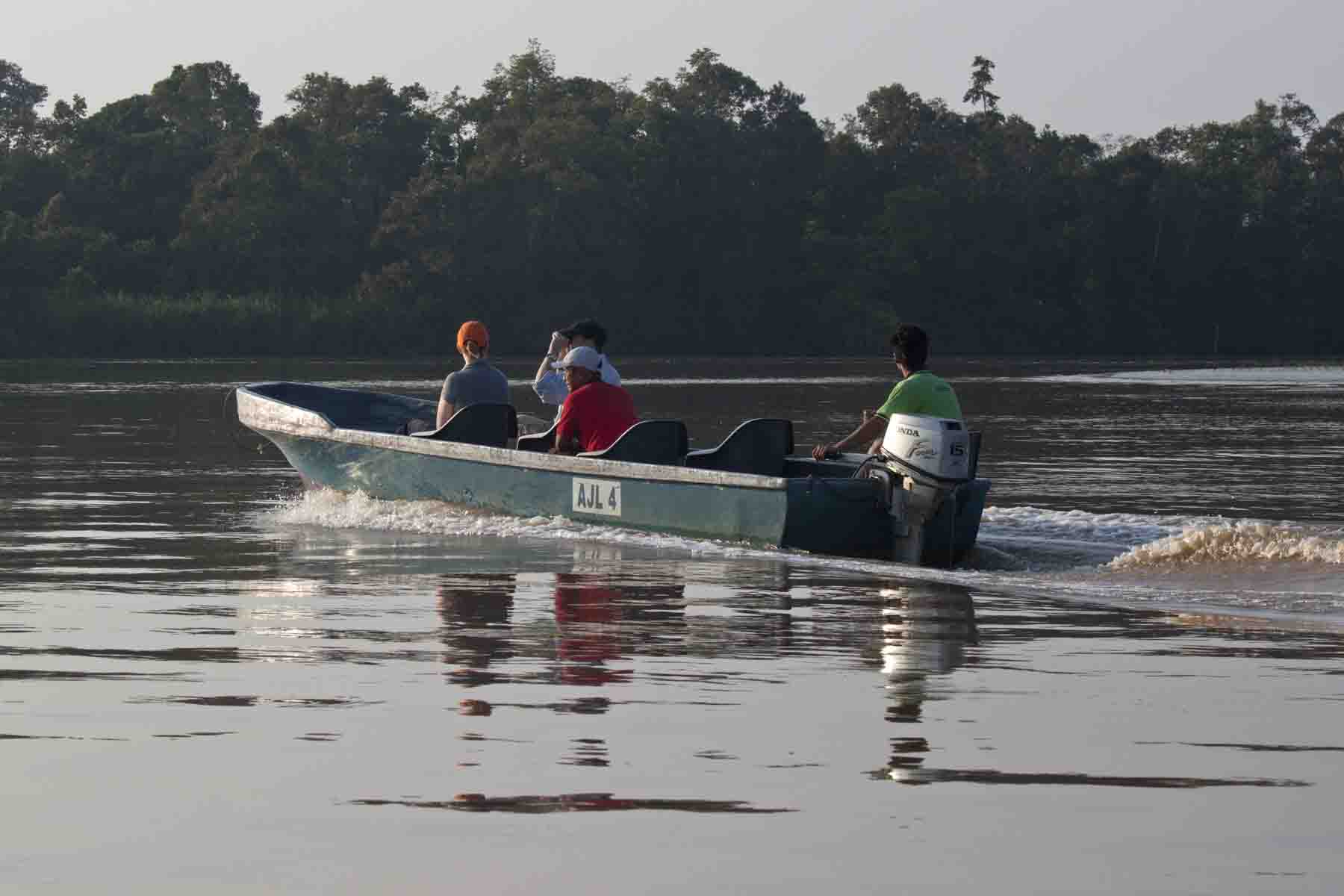 Chugging along on the river 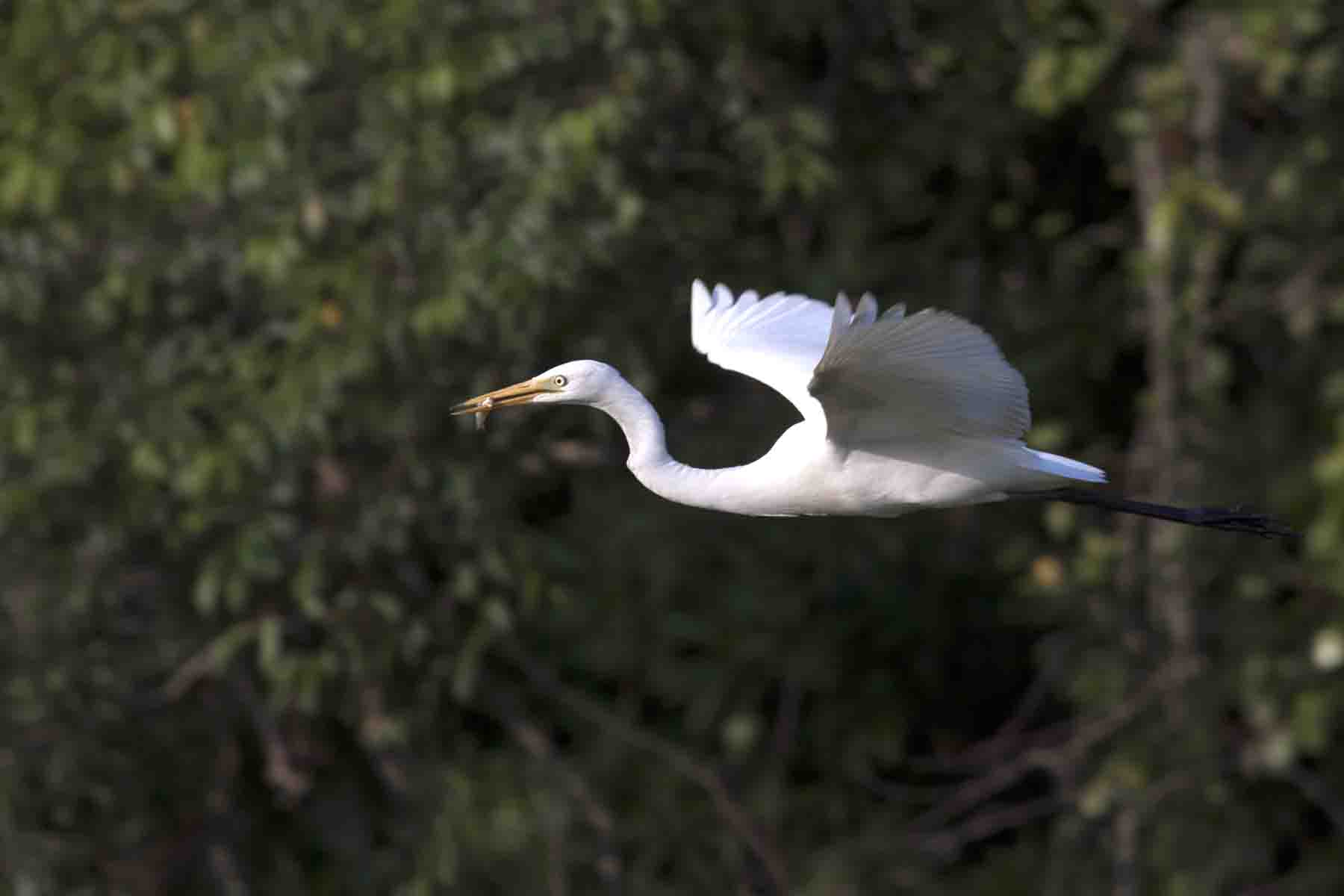 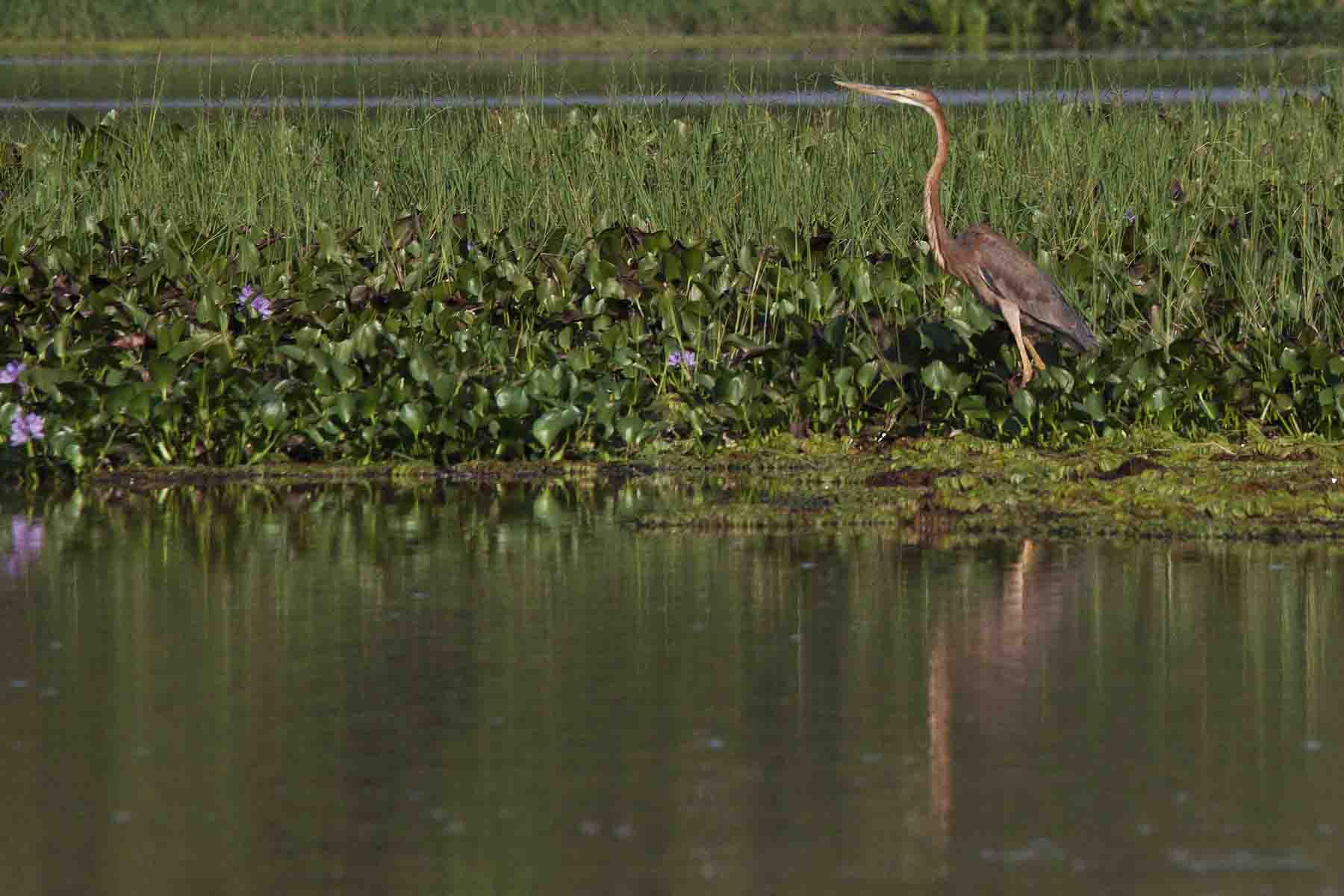 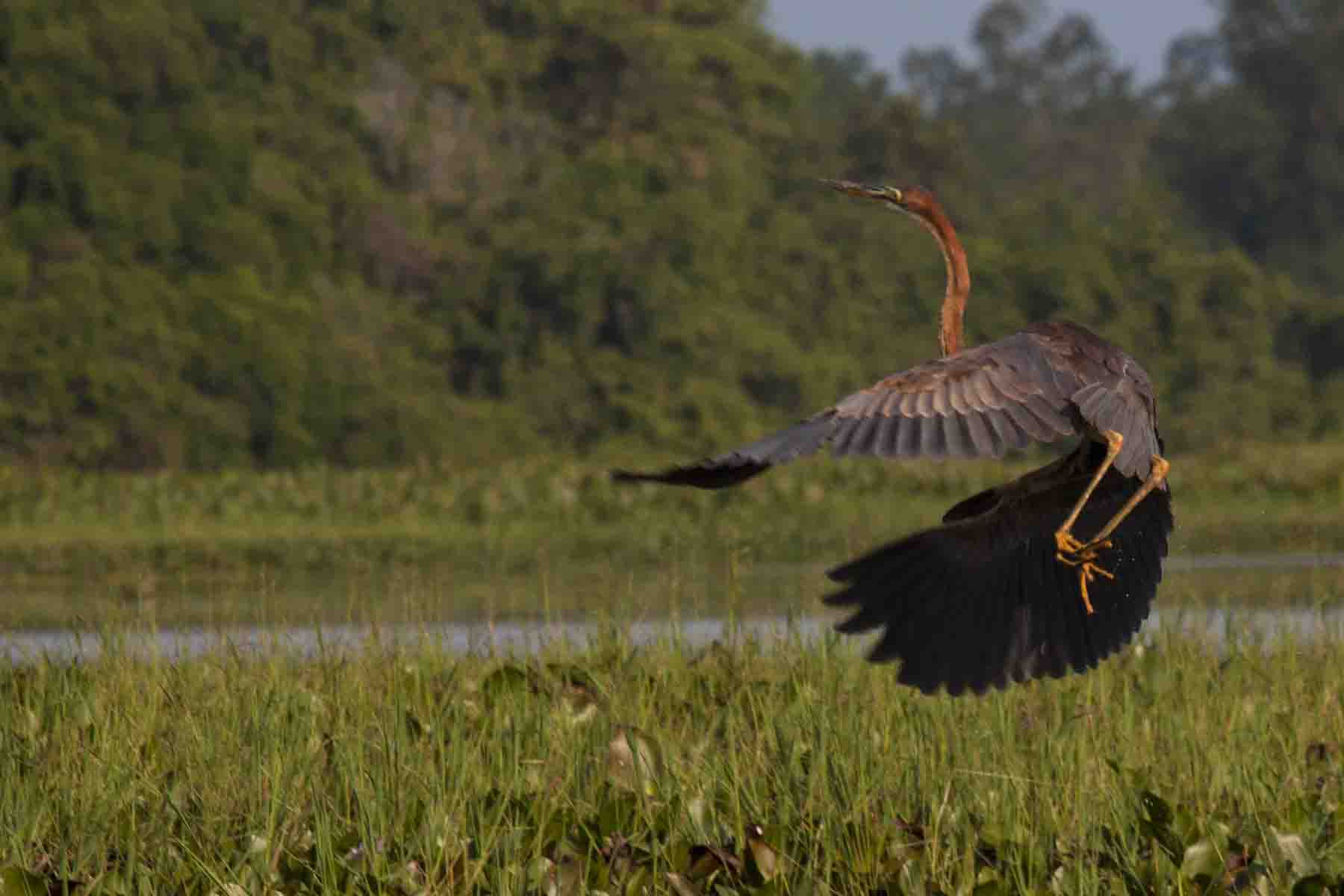 Abai Jungle Lodge was just lovely! All construction was in wood, the warm tones of which were the perfect compliment to the jungle engulfing it. Every single walkway railing in the lodge area was dressed with pots of multi coloured bougainvillea.  A truly delightful atmosphere was created in this place. Our feet did not touch the earth once in the two days we were there – all ‘trails’ were on raised wooden walkways, and when we weren’t strolling with heads tilted towards the treetops, we were in boats cruising alongside the riverbanks, eyes straining for glimpses of Borneo’s glorious fauna. We were lucky enough to see a crocodile, many birds, oodles and oodles of show-off proboscis monkeys, and one huge male orangutan – excellent!! A very memorable experience. 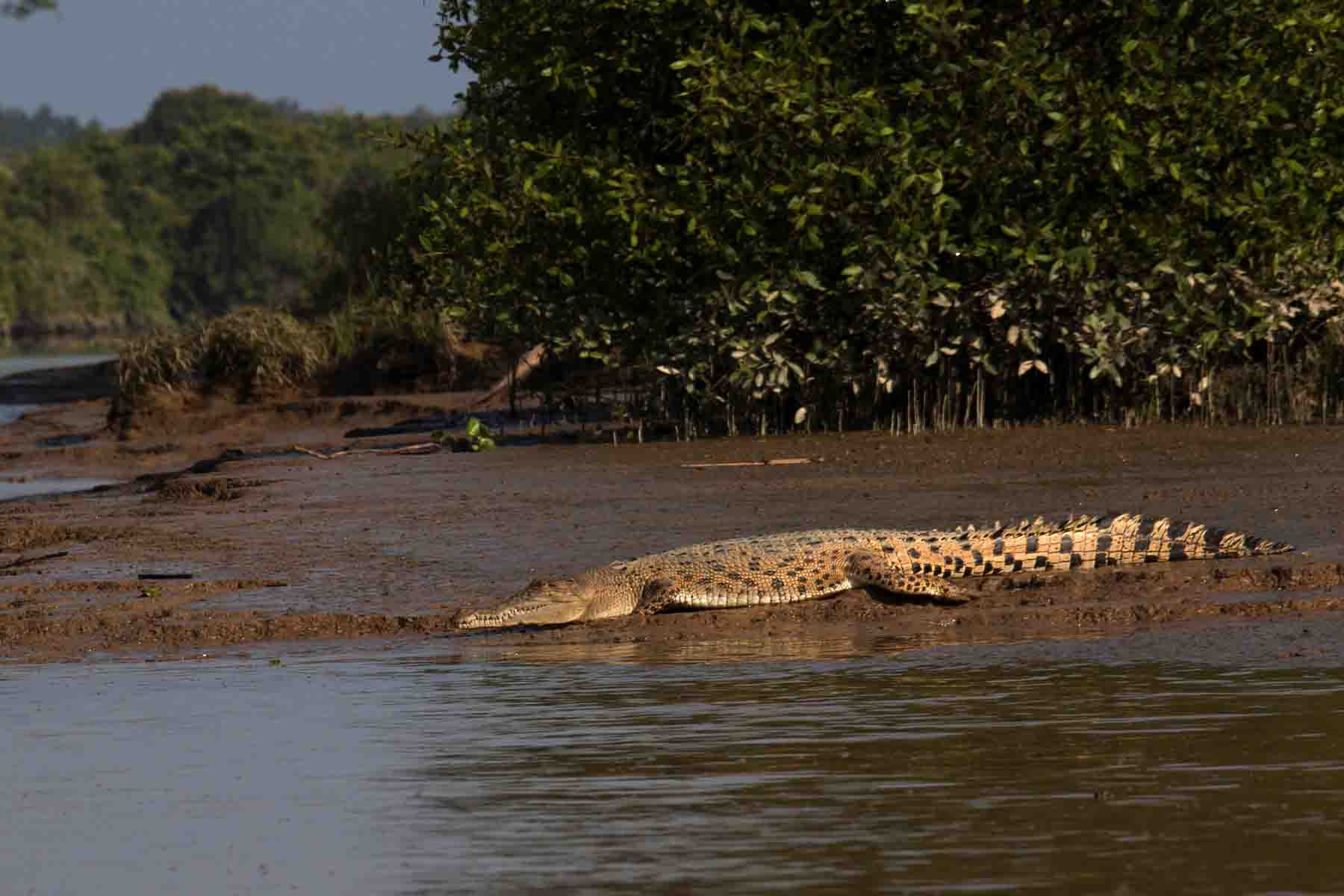 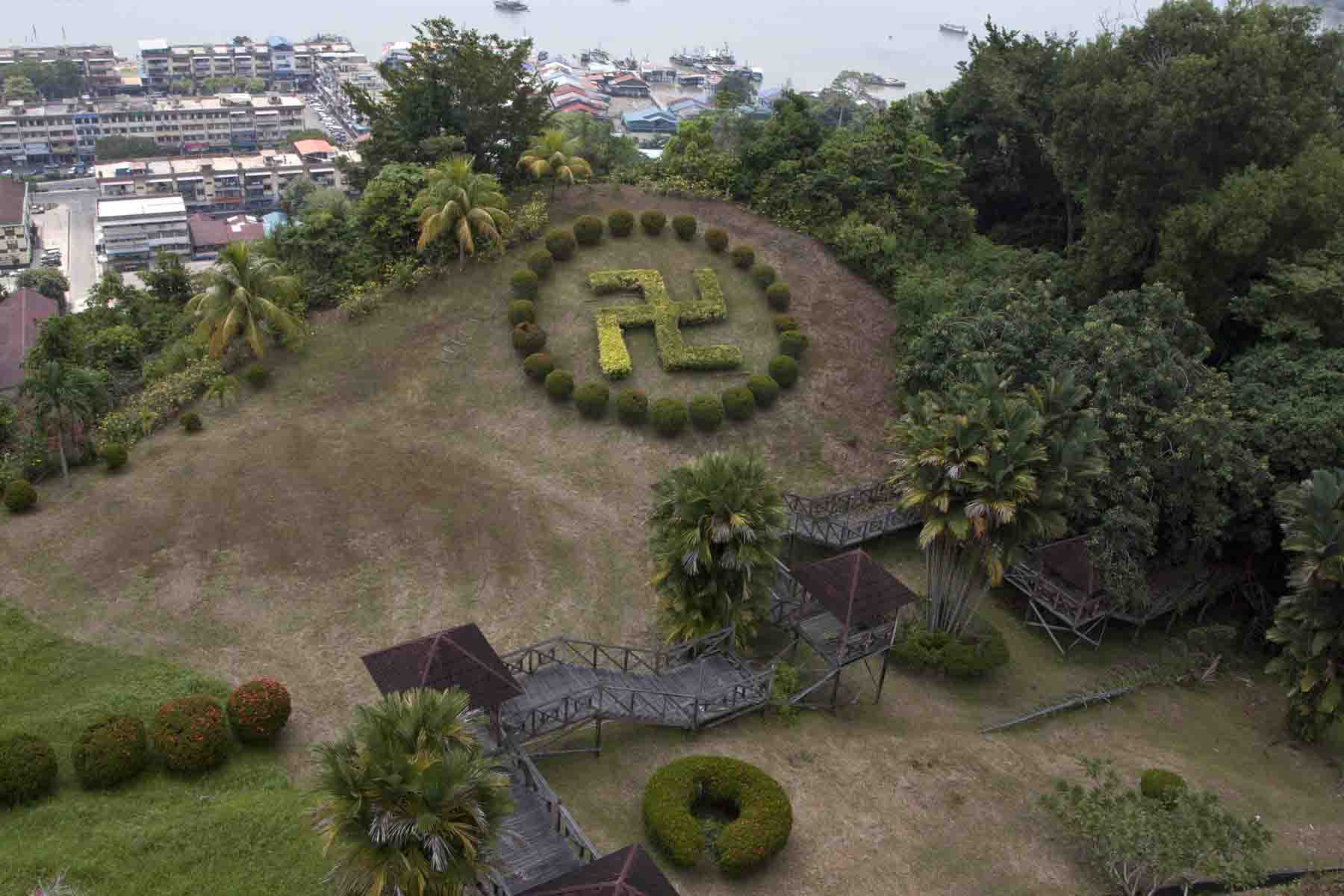 Garden at the Chinese Buddhist Temple 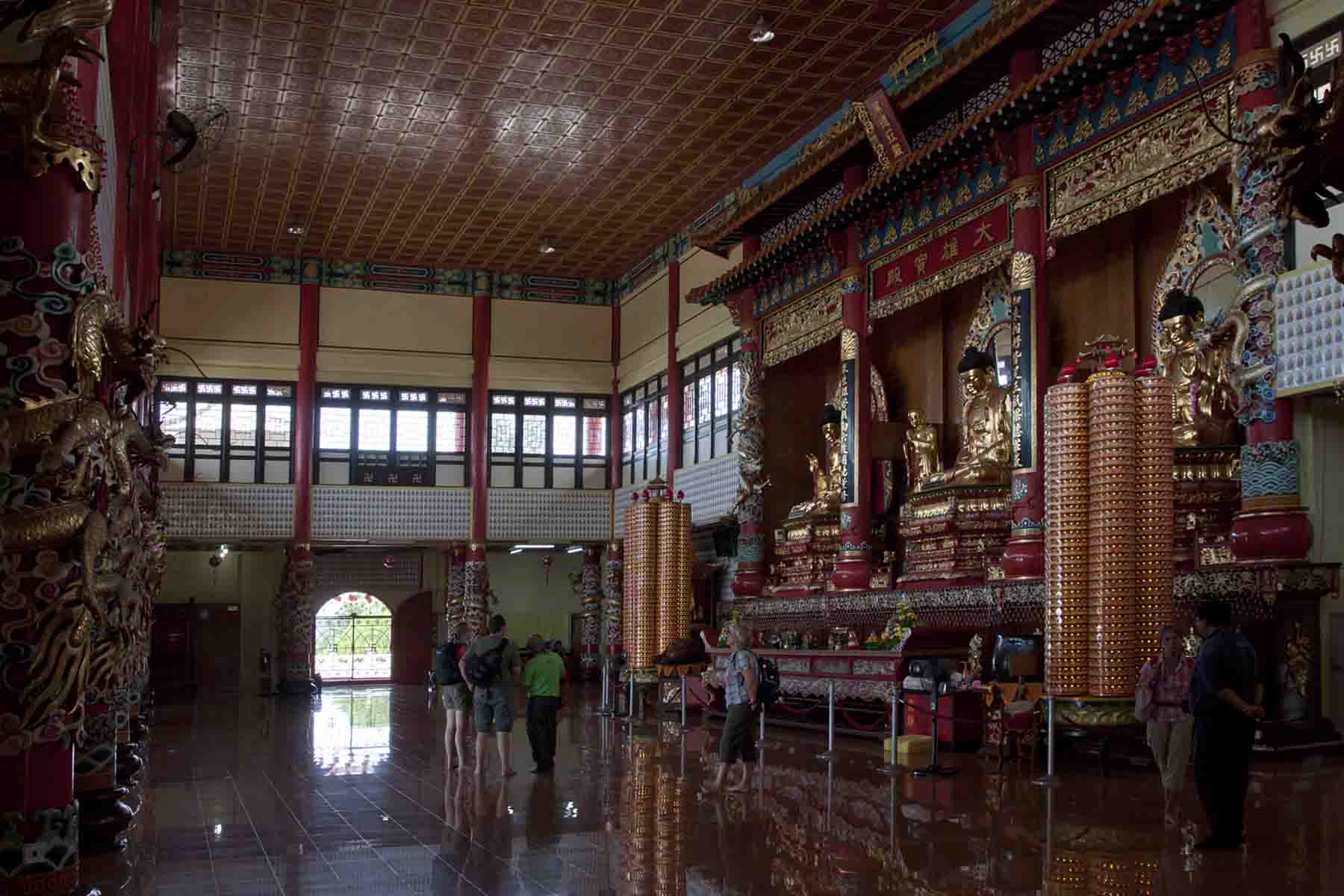 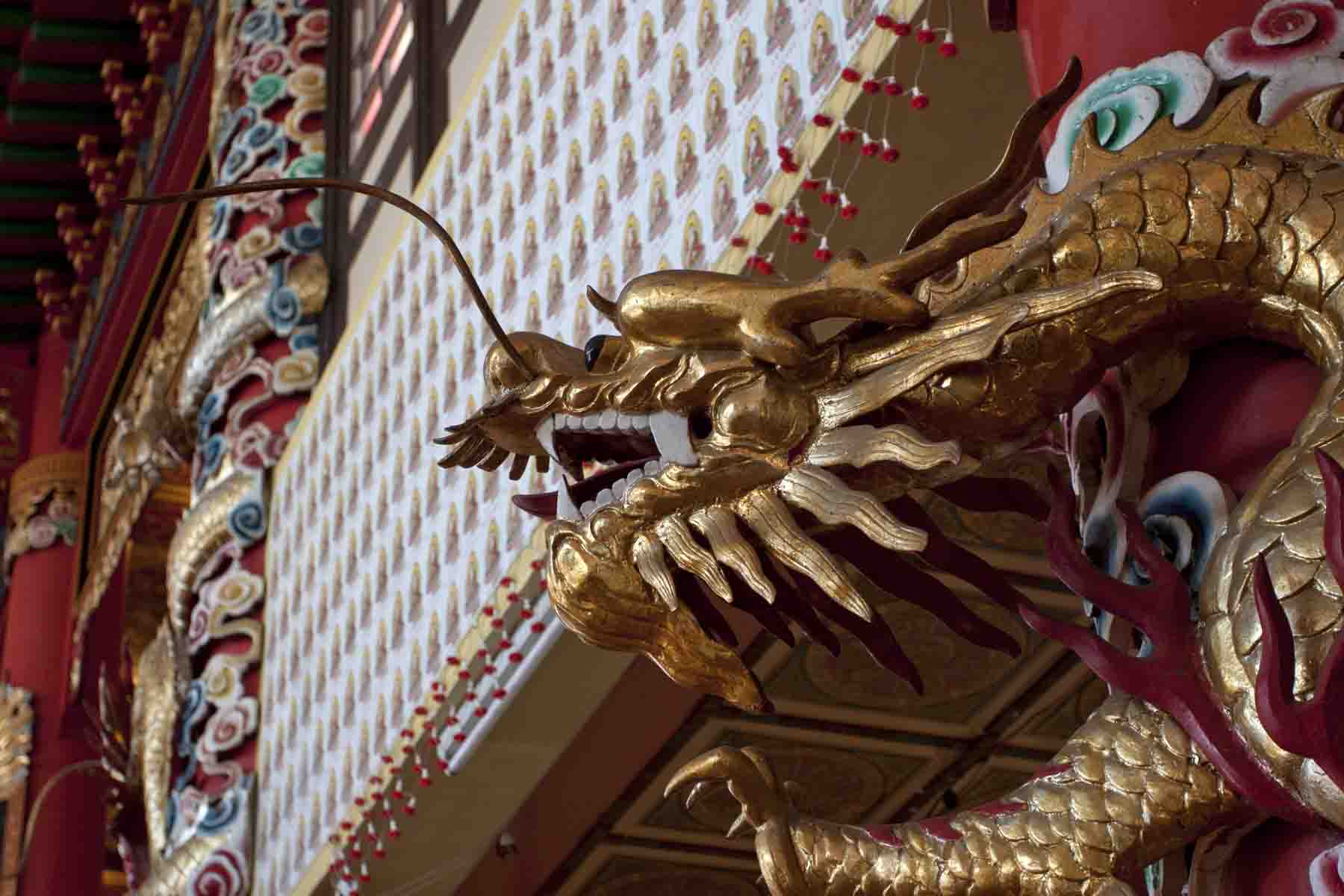 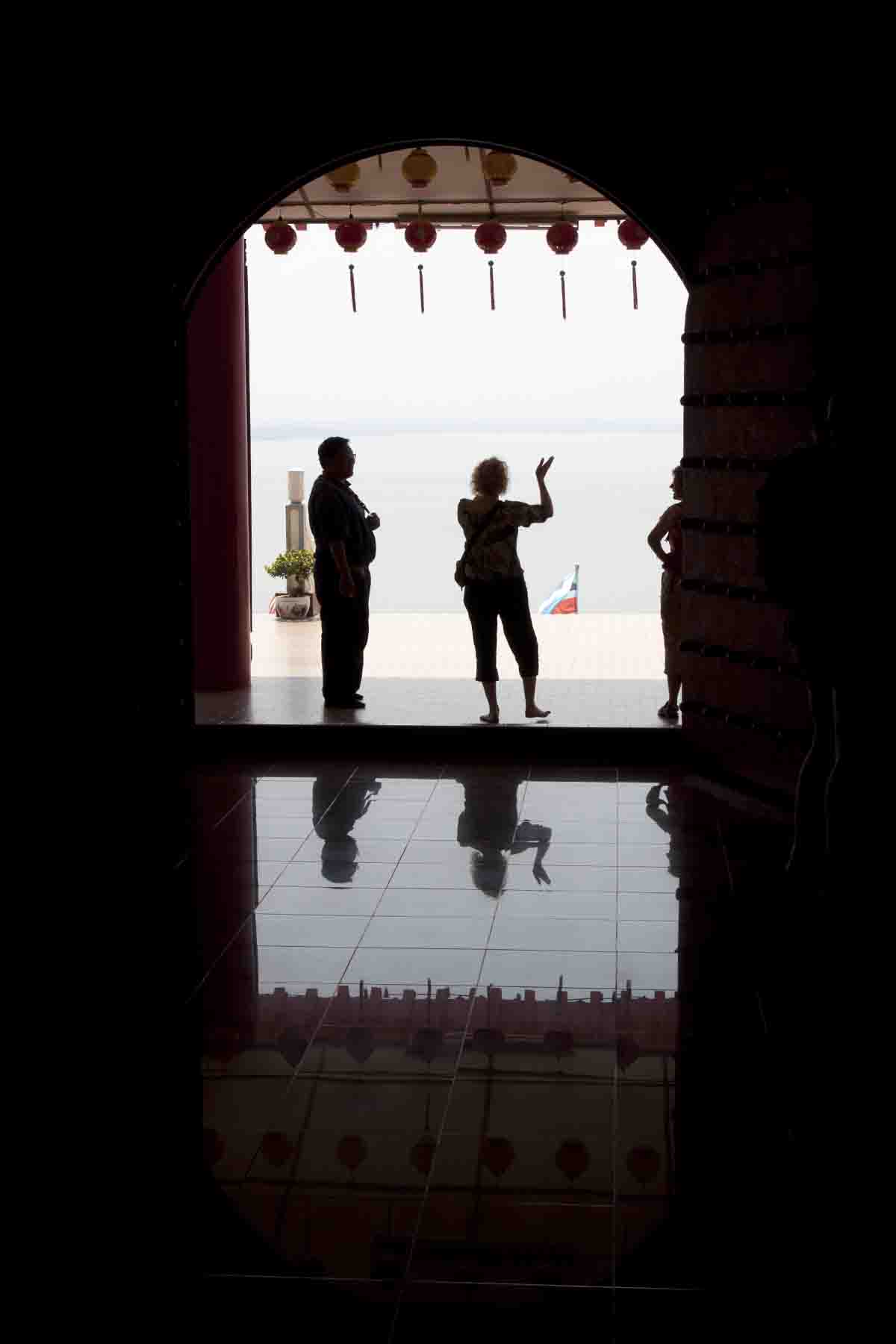 Nic, talking with her hands…how unusual!

The last treat included in our SI Tour, was a visit to the Chinese Buddhist Temple that overlooks Sandakan. It was quite amusing to see people ‘start’ when they first arrived at the temple, because of all the Buddhist peace symbols – the ones that look exactly like swastikas, only they face the other way (damn the Nazis for taking that symbol and turning it into something that instills fear in all people, even now…but that isn’t all we should be damning the Nazis for!!). The gigantic topiary piece in the garden was particularly striking! There were a couple of cool statues just inside the entrance that looked like bouncers – one was making a “rock on” symbol with his fingers, the other had a, “Don’t mess with me or you’re out” stance going on. Apart from the glamorous, colourful and sometimes garish decorations, it was a pleasant reprieve from the cloying heat outside.