We were excited by the continued supply of hot water at The Culloden (must’ve just been some weird glitch the previous morning), and were rested by another lovely night’s sleep in a cocoon bed. After check out we drove straight to the next National Trust property on our wish list – The Argory. Now, this place isn’t exactly ‘on the way’ to Newcastle, in fact, it is in another direction altogether, but everything seems so close in distance here, that we decided to ‘swing by.’
The Argory didn’t open until midday, with the first tour at 12:30pm, so we had some potato and leek soup in their café and enjoyed walking through the grounds and along the river to fill the time. Had a lovely chat with some locals walking their shepherd along the waterway – well, she’d jump in for the occasional swim, while they walked, then politely lay at their feet while we talked. Another well-mannered dog.
Our guide at the house was a bit of a ditherer, and occasionally got off track, but she was very sweet and friendly, and knew a lot about the history of the family and the building. The Argory is a rather impressive house – of particular interest, especially for the time it was built, were the cantilevered staircase and the heating box in the entrance hall with a flu going into the floor rather than the ceiling. Very cutting edge in design! Apparently the flu didn’t draw very well at all, but the staircase was gorgeous with its floating steps and 165 brass balustrades. Even today, the place doesn’t have electricity for the lighting – all lights are gaslit, powered by a gasworks on the property – now that is wealthy, having your own personal gasworks!
From The Argory we drove a few minutes to the less majestic Ardress House. It was an old farm-house that had been extended and renovated as its owners moved up in the world – very quaint and appealing. The guide was excellent in her knowledge of the antiques and allowed plenty of time for us to gaze and appreciate before moving us on to the next room.
Our leisurely afternoon drive led us to Slieve Donard Hotel. Newcastle has the most delightful setting – a gorgeous picturesque town nestled up against the imposing Mourne Mountains and facing the wildness of the Irish Sea. Admittedly, our time here was spent holed up in the perfect location of the Slieve Donard Hotel (which faces both said mountains and sea), while the elements battled outdoors and we watched from the warmth and safety of our huge bay window room – the perfect place for weather-watching! Go to Slieve Donard Hotel & Spa 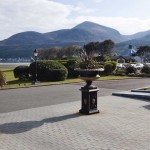