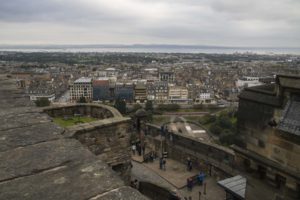 View of the New Town from Edinburgh Castle, Scotland

Our very early arrival in Edinburgh meant a full day of sightseeing before we had even checked into our accommodation. At least we were able to drop our luggage, change our shoes for something walking-friendly and sturdy, and get on with it. So even after immigration, clearing customs, trip from the airport to the city centre, and hotel bag drop, we were out and about seeing the capital by 8:30am.

Second breakfast was in order, but as we didn’t want to be slowed down by satiating our hunger, Pret-a-Manger presented an elegant solution. Vegetable wraps and other yummy bits and pieces filled the gap, and we headed up the Royal Mile towards the castle. We were a little surprised at how few people we were out and about – maybe they were sleeping in on this fine Sunday morning. By the time we got to the castle at the top of the hill, it all became clear – they were all gathered at the gate, waiting to enter Edinburgh Castle.

The time spent waiting was filled with watching the crew working in the Castle Esplanade removing the stadium seating from the Military Tattoo (200,000 audience members over 3 weeks). Glad we weren’t in town for the Festival – it would’ve been a nightmare trying to see anything or eat anywhere (and forget about a hotel room at a decent price).

Once security gave the ‘nod’ and opened the gates there were quite a few eager tourists gathered. For those of us with the advantage of long legs and a reasonable level of fitness, we were able to traverse the Esplanade in short time and were the first in line for entrance to the ticket booth and the castle itself. Here we learned of the Explorer’s Pass that gives entry to Scotland’s castles and other sites for 3 days in a 5-day period, so we purchased those and saved a whole pound each! Bargain!

We enjoyed our self-guided tour of the castle, listening in occasionally to the free guided tour with the charming kilted Scotsman with a brash and teasing sense of humour. Particularly impressed with the Scottish National War Memorial in Crown Square at the top of Castle Rock. It’s one of the buildings flanking the square and provides a vivid connection with those lost in battle (no photography is allowed inside).

I was also enthralled with the elements of the castle with relevance to Mary Queen of Scots. Spent some time in the Palace and its Royal Apartments, including the bedchamber where she gave birth to her son, James VI, who united the crowns of Scotland and England in 1603, becoming James I of England.

Leaving Portcullis Gate and strolling leisurely down the hill along the Royal Mile, we were glad not to be in the growing admission line to the castle. We didn’t get far before stopping in at Gladstone’s Land (National Trust Property). This 17th century restored merchant’s house gave a glimpse into life in the Old Town before over-crowding drove the wealthy inhabitants to the Georgian New Town. I love a good National Trust Property, especially ones that have been well restored and maintained and really give a feel for what it was like ‘back then.’ It was also great to see volunteers for the Trust who were young and passionate about history, giving their time to show people around the house.

We continued down the Mile through its incarnations of High Street approaching Canongate. We stopped in at David Bann for an early lunch (our body clocks were a bit out of whack thanks to our super long day of international travel). We were excited about dining in this vegetarian restaurant of excellent repute, but it was not quite 11:30am, and while they could serve us food, they could not serve us alcohol (don’t judge me – we had been up since 4am!). It is against the law to serve alcohol before 12:30pm on a Sunday; a glitch in our full dining experience plan. Instead we gorged ourselves on the outstanding food, and waddled out, fully fuelled and ready for our next adventure.

This took us to the Palace of Holyroodhouse, the Queen’s residence whenever she is in Edinburgh. Before hitting the palace, we popped into the Queen’s Gallery, which had a changing exhibit of pieces owned by the royal family. Some people skip this option and head straight into the palace, but I was suitably captivated by the exhibition.

The palace itself was impressive, yet charming, to wander through. Loved that it was an audio-self-guided arrangement – you can take as long or as brief a visit as you want. The visit unfolds as though you are making an official visit to Her Majesty, and the further you get into the journey, the more intimate the spaces become, and the ‘closer’ to the Queen you get.

Continuing to fuel my fascination with Mary Queen of Scots we spent some time in Mary’s Bed Chamber, where her first husband, jealous Lord Darnley, restrained Mary (who was six months pregnant) while her secretary, Rizzio, was murdered in front of her. A plaque in the neighbouring anti-chamber marks where he bled to death. Darnley clearly had issues (no photographs allowed inside).

Attached to the palace are the remains of Holyrood Abbey. The remains date back to the 12th and 13th centuries, although one doorway has survived from the original Norman church. It would’ve once been a magnificent building, but even in ruins, it is eerily striking. We managed to squeeze in a brief wander through the gardens where the Queen has her official annual garden party. Leaving the manicured beauty of the royal backyard, we headed out to immerse ourselves in the more untamed and rugged wilderness of Arthur’s Seat.

It was certainly a workout climbing that hill! While it may ‘only’ be 250m, that was enough of a challenge for our travel weary bodies! The hill is actually a volcano that has been extinct for 350 million years. And such a mighty view from the top – well worth the expended energy in the climb.

Being essentially a large hill, we decided to try ‘another way’ down, and promptly got lost. Well, not “lost” exactly, but the path disappeared and reappeared, merged with sheep tracks and stopped abruptly at various precipices. Given the length of our day, I began to get a bit sulky about the decision to be adventurous, but was promptly jolted out of this childish bent by a bit of a scare – thought I was going to lose John off the side of a cliff in a slippery moment. Not quite the benign city park experience it appeared.

The Inn on the Mile

But we found our way to the bottom and dragged our worn out bodies back to our digs, finally checking in to the Inn on the Mile for our three night stay in Edinburgh. Although, technically, we didn’t make it in the front door, we instead nabbed an outside table and ordered a beer and bubbles and watched others walk on by whilst our check in was being processed by the reception cum bar staff. Nice way to handle check in! It was that lovely time of the late afternoon/early evening when people were looking for spots for pre-dinner drinks and nibbles, and the outside tables were quickly filled. Glad we grabbed one before we went to the room, although, once seated, it was difficult to motivate oneself to move again!

We had been in the city less than 10 hours and we had already walked more than 8km. No wonder the aches in the body were already setting in the moment we stood up after our drink. And we only had to tackle the 79 steps to our room! That’s what you get when you have one of the best rooms in the place.

Our ‘Royal Mile’ bedroom was a stylish combination of original features, such as the high ceilings, sash windows and ornate cornices, and sleek modern design in the bathroom and furnishings. Love that there were crystal whiskey glasses in the room, two beside the bed and two in the bathroom. Nice touch. The bed was super-comfortable – firm, but inviting…and huge! And there was plenty of room under the bed to stow away suitcases, which was great because the floor space wasn’t expansive.

The only thing left on the agenda of a day full of exertion was a long, relaxing soak in the bath to ease the tired muscles, and attempt to ward off too much tenderness that was sure to follow the next day. And, of course, had to sample those fine whisky glasses with a nightcap.

Accommodation: Inn on the Mile, Edinburgh 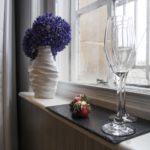 Flowers, flutes and strawberries, the Inn on the Mile, Edinburgh, Scotland

Sleek bathroom, the Inn on the Mile, Edinburgh, Scotland

Royal Mile bedroom at the Inn on the Mile, Edinburgh, Scotland 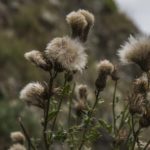 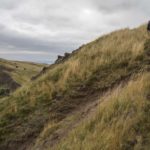 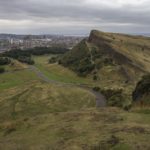 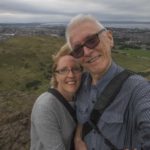 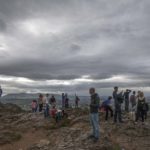 Uni students on their day off on Arthur’s Seat, Edinburgh, Scotland 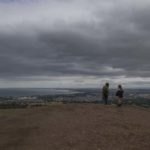 Edinburgh from the top of Arthur’s Seat, Scotland 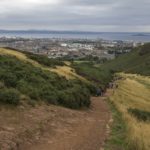 Looking back down the hill, Arthur’s Seat, Edinburgh, Scotland 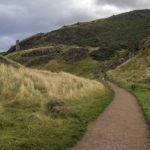 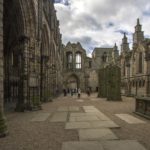 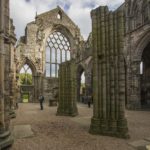 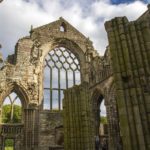 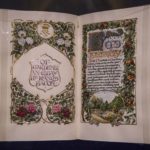 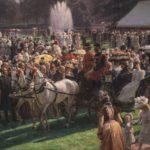 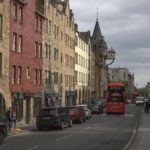 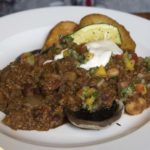 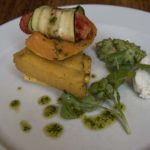 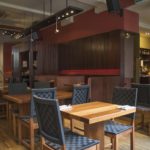 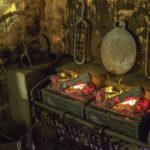 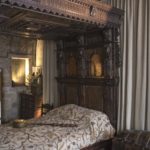 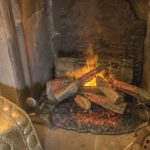 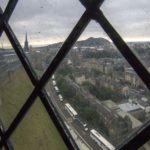 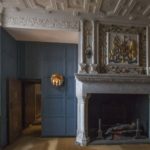 Nic taking a pic of a horse statue, Edinburgh, Scotland

View of the New Town from Edinburgh Castle, Scotland 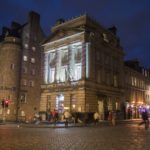 The Inn on the Mile, Edinburgh, Scotland