Headed straight out of Belfast (after an excellent 9 hours sleep!) to Castle Ward, a National Trust property near Strangford Lough. The interior style of the house is completely split right down the middle – one half classical Palladian, the other neo-gothic. The husband and wife really didn’t get on in any way whatsoever – still produced 6 children though (not a love match). The son went on to marry someone he did love, and they produced 14 children. So many of these tours of old houses included little anecdotal and ‘did-you-know’ snippets of the period that the references started sounding familiar. But I did enjoy finding out that due to the unbelievably high price of tea (which was kept under lock and key by the lady of the manor), the servants would take the used tea, dry it out, cut the quantity, mix it with other leaves, colour it with boot polish and sell it on. This went on down the line to poorer houses where finally, what was being consumed was basically toxic. It was a very impressive house, even if a tad odd due to the décor choices!
We enjoyed the highly scenic drive around the Lough from Castle Ward to Mount Stewart House, crossing from Strangford to Portaferry via the ferry, and meandering north in the drizzle. Mount Stewart House was truly lovely – my favourite of the National Trust properties we visited. The gardens were gorgeous – designed by the quite magnificent Lady Edith (whose husband was the Marquess of Londonderry). This was a woman of wit, intellect and drive – she had the ear of 7 prime ministers and wielded much power in social circles, both Irish and English. She truly sounded like a woman who could’ve been PM if she’d have been born in another time.
The design of the 98 acres of gardens was thorough and beautiful – from the sprawling forests and lake through to the manicured and creative formal Shamrock, Spanish and Italian gardens. The climate here is very similar to Cornwall and Devon, so it’s perfect for such a horticultural creation.
We moved on in the late afternoon to our Hotel – The Culloden, where we had been upgraded to a junior suite (thanks to our travel guru, Robert), complete with outstanding views right across to the other side of Belfast Lough. The bed was plush – huge pillows and fluffy doona, carved four-poster frame, and one of those long stools with curly feet that sit at the end of the bed (the sort I love, but don’t have the room for at home!). We even got the evening ‘turn down’ treatment – this time fudge rather than chocolate was left on the bedside tables (I could live with that!). Go to The Culloden

The restaurant Koi at Holywood (pronounced Hollywood) had been recommended, and we took ourselves off ready for a bit of spice. This is a multi-Asian cuisine place offering a range of Malaysian, Chinese, Thai and Vietnamese dishes. We were overwhelmed by the range on offer, but very happy with the quality of the meals. Being able to dose up on chilli, garlic and ginger with our favourite vegetables was a gift! The place was packed, too – mostly locals who know a good thing when they find it.

The next morning we were more than a tad disappointed to discover that there was no hot water – almost an exact replay of our experience on Inishmore, only this was The Culloden (so VERY unexpected as it was much prettier and had a higher star rating!). John rang reception and they sent someone up immediately, I guess to make sure that we knew how to work the intricate shower system. When he realised that it wasn’t just incompetent tourists, he ran off in search of the problem. However, that took time. We utilised our now deft basin washing skills, dressed, and headed to breakfast, expecting to be able to shower afterwards. But luck was not on our side this morning, and as we were leaving the hotel at 10am for our day out, we were told that the problem had been fixed, and sorry about the inconvenience (at least they were sincere!). But it was too little, too late for us in our tight schedule of relaxation and sight-seeing, and we headed off (me with an un-coifed coif, and John looking his dapper self).

Bangor was calling, and we fell in love with this sea-side town, popular with the well-heeled who work in Belfast and have a very short commute every day. This is something that keeps astounding me – the cities are only 10 minutes drive away from the country, not an hour and a half! Sydney really is just one gigantic, ungainly, endlessly-sprawling mess by comparison!
We strolled part of the way along the coastal walk, meeting lots of dogs and their owners – both parties always well-mannered and friendly! The sun was shining, but the wind-chill factor meant it was still very cold. Luckily, the temperature rose as the day ticked over. We walked for about 2 hours (maybe 8km), lovely to have the weather to be able to do so – there were quite a number of coastal walks in the north of the country that we would’ve loved to have done, but the weather was just too much of a hindrance. It was nice to have that bit of exercise, considering the special lunch we were about to indulge in.
The Boathouse Restaurant at Bangor gave us one of the finest meals of our trip – in every possible sense. The service was spot-on, the dishes were inventive and delicious, the portions were the right size, the atmosphere was perfect AND we got to chat with the chef about his creations! STARTERS – 42˚ C poached Glenarm organic salmon, sour dough croute, sweet & sour red cabbage, red cabbage gel, chocolate & cumin mayonnaise; Belfast Lough crab & pineapple ‘lasagne’, soy marshmallow, wasabi yoghurt, toasted sesame seeds, bitter cress, chilli, saffron & lemon grass syrup; MAINS – Grilled fillet of turbot, prawn reduction, prawn tortellini, grilled langoustine, pea gel, Strangford Lough samphire; Pan-fried Carlingford Lough sea trout, white asparagus, hollandaise sauce, pistachio crumb, chateaux potatoes. The trout was especially fine – so moist and flavoursome in the flesh, but the skin was VERY crispy (due to extra scraping which dries it more, according to the chef – he was thrilled with the detailed feedback, and shared my preference of trout over salmon). It was a completely delightful fine dining experience.
Strolling through the marina after lunch, teeming with people basking in the cloudless sky and rising temperatures, we succumbed to the fresh produce markets from medfood.co.uk. They had a range of luxury items from lemon stuffed olives and cheeses through to baklava and nougat. It was hideously expensive, but so tasty that we had to get a few snacky things for dinner (and beyond!).
By the time we had finished exploring Bangor, it was later than we realised, and we hurried to the Ulster Folk Museum before it closed. It was an interesting outdoor museum – a cross between Old Sydney Town and the ethnological museum we visited in Riga. Just like the Riga museum, this one was full of old buildings from different times in Ireland’s history, mainly 18th century, that had been dismantled and moved to the site and reconstructed, complete with authentic furnishings. Even though we arrive just over an hour before closing, we still managed to take in most of the village area on display, but had to forgo the farm areas. There were still some guides in some of the dwellings (dressed in period costume) to explain how things worked and how people lived in those times. I was even taken by the fact that they had coal fires going in all of the buildings – everything still works! We were both particularly fascinated by the woman in the milliner and fabric shop who spends her days weaving on an old ‘flying shuttle’ loom – every bolt of fabric in the shop was woven by her. Very impressive.
Attached to this property is an old manor house, not open to the public, but a popular venue for weddings. There was actually a bridal party having their photo shoot done at the museum – various poses in the old pub and walking through the streets. The bride looked stunning, even if she did appear to be freezing her bits off!
As the old man started to lock up the buildings, we thought it was time to leave, and so headed back to the hotel with a bottle of wine and our selected snacks of cheese, olives and chocolate from the markets. The plan was for some relaxation before channelling the ‘writing machine’ for work on the blog – but that was thrown out the window completely, and we watched crap telly instead! 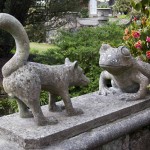