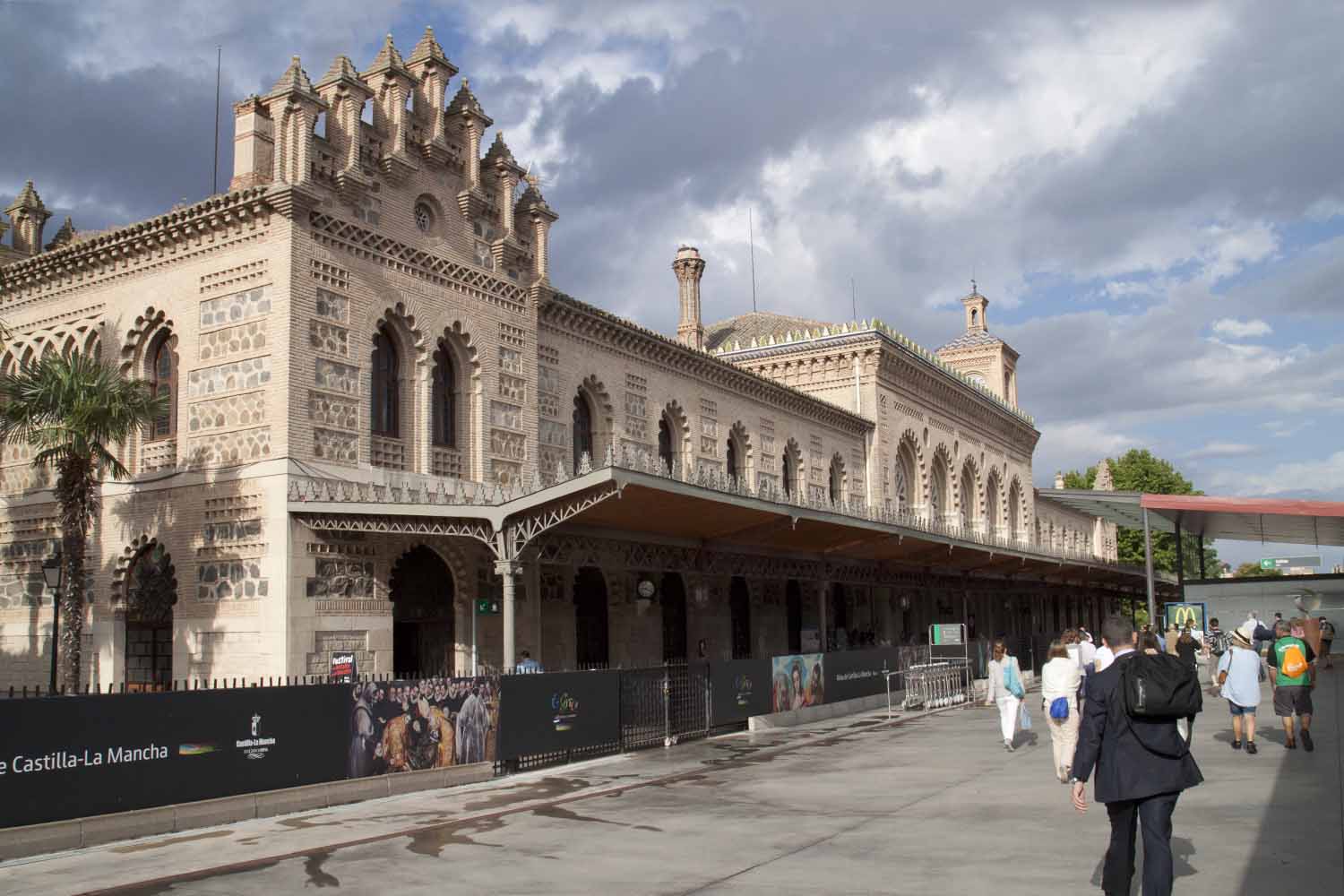 We had become so enamoured with Madrid that we were beginning to wonder if our decision to pre-purchase train tickets to Toledo for a day trip was a wrong move. But this medieval city that was once the capital of Spain held many delights, and was definitely worth giving up a day in Madrid to experience.

We walked from the Ritz to Atocha train station – which is a surprisingly nice building. The train was fast (travelling at 250kmph), but a little too ‘sway-y’ for my liking – had to stop reading cause I started to feel ill. Twenty minutes of travel time later, we arrived in Toledo. Toledo train station is probably one of the most beautiful stations I’ve ever seen. The old ticket booths were gorgeous, all dark, intricately carved wood panelling, with stained glass shutters for when they were closed. The whole room was lined with Moorish tiles, creating a shiny, colourful wall that created an impact when entering the space.

As we were on the 8:50am train, we had plenty of time before everything in Toledo opened at 10am, so we walked to the old town, via the escalator at the car park that most people don’t know about. Made it all very easy yet scenic as well. Followed a walking tour that was in Lonely Planet, up and down through narrow streets, cobbled and cool. Stopped at the Alcázar – Toledo’s military museum. It was a well thought out, informative and interesting experience, but the old (restored) building itself is not part of the experience, which was disappointing.

We stopped for ‘elevenses’ at a small café. Ordered a vegetarian sandwich – complete with tinned asparagus and tinned tuna (!! – the English translations often miss details)…oh, and a small beer. Very refreshing. The repast gave us the energy to tackle yet more cobbled and hilly laneways – all gorgeous, of course.

All fuelled up, we continued on to the cathedral. Naturally, it was very magnificent, grand, glorious and imposing…but it is difficult to disassociate the beauty from the history of the church in all its evil – Zocodover Plaza is the site of burnings during the Spanish Inquisition, which is not exactly the product of a loving religion, but one full of fear, hate and persecution.

We wanted to climb the tower of the cathedral, but the next session available was 4pm, so we booked ourselves in for that time, decided to go and walk more of the medieval streets, and return later.

We strolled past quite a few options in museums and wished we had more time to take them all in, but lunch was calling us. Bar Alfileritos 24 was where we landed. They have two separate dining experiences under the same roof – a tapas bar and a more expensive restaurant (upstairs). They were full at ground level for the tapas, so they put us in the basement – the musty air that was the perfect environment for the wine bottles stored there didn’t take long to get used to, and the room was stylishly lit, with funky tables and sand covered floor. They fed us some tasty tapas – tomatoes with mozzarella and basil vinaigrette, mushroom croquettes, and potatoes with pepper and garlic sauce.

Refuelled, we headed to Zocodover Plaza and…rested! All the walking and the food and wine meant that we weren’t up for too much straight away. And, let’s face it, we would need our stamina for climbing a tower before too long! It was quite surreal sitting on a bench in this nice, quite unremarkable plaza, watching the world go by when 500 years ago, the Spanish Inquisition was going full throttle in the exact same spot. It must have been a truly terrifying time.

Our appointment with a cathedral tower called, so we set off again. Waiting in the cloister for our tour to start it was easy to imagine the peace sought by many in such an environment, although I have my doubts as to how many actually achieved that tranquility. The climb to the top of the tower gave the calves and quads a good work out – which we’ll both pay for tomorrow! But it was worth the climb; the views over Madrid’s medieval capital, as to be expected, were spectacular.

After our descent we attempted to do some more wandering through history, charting our course to Monasterio de San Juan de los Reyes but it started raining, so we thought ‘sod it’ and instead went to Adolfo Colección Catedral wine bar to indulge in a lovely red and some manchengo drizzled in olive oil and sprinkled with oregano. Top choice to escape the rain.

Window-shopped our way back to the edge of town and walked back to the train station for the return trip to Madrid. Tried to snooze through the loud talking and laughter of a group of American college students, sounding and behaving worse than young high school students, with their cruel jibes of others, complete unawareness of the rest of the world listening, and no consideration for the rest of the travellers who wanted some peace. Thankfully, only 4 of the large group were behaving like this, and one of the others even tried to tone down the raucous ones, but it didn’t stop this one particular brash, ignorant piece.

Even though we were weary from our walking throughout the day, we were determined to see some flamenco. On our return to the Ritz we asked the concierge about a flamenco place mentioned in the guide books – Casa Patras. He, instead, recommended Corral de la Moreria, so we got him to book us a table. They offer dinner and a show, but we just opted for the show as we had been eating most of the day. Caught a cab there and rocked up but they had no evidence of a booking. Luckily our concierge had provided us with a Ritz card with the details on it, and we got an excellent table. Enjoyed the complimentary glass of wine and ordered a tapas salad (which was yummy, but ridiculously overpriced). Should’ve just kept eating the complimentary bread – not that we needed to actually consume ANYTHING!! My trousers are getting tighter by the minute!

The flamenco show was brilliant. They have different performers each night and we were lucky enough to see a group of dancers of such profound talent that I would have to rate this as one of the best performances of any kind that I have ever seen. The male, Eduardo Guerrero, has danced with the Russian ballet and had recently received an International title of best male flamenco dancer (not sure which competition). He had amazing strength, flexibility, control, power, passion, finesse, subtlety, grace and feline containment before springing with such suddenness, it was startling. The better of the two women, Maria Moreno, also had me completely entranced. Oh, and the acting was brilliant, too. And all had phenomenal core strength. The singers and guitarists matched the brilliance of the dancers with their skill and conviction and stage presence. Excellent night!

Slightly weirded out by The Stones in this form (and Chuckie in the corner), Toledo, Spain 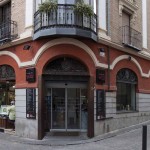 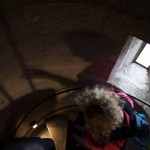 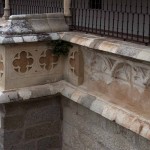 View of the Alcázar from the belfry of Toledo Catedral, Spain 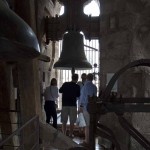 View from half way up the tower, Toledo Catedral, Spain 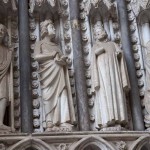 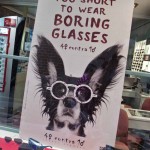 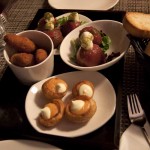 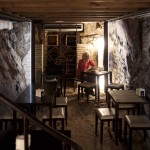 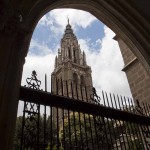 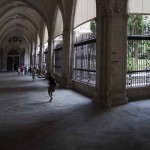 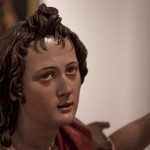 Close up of a work by El Greco, Toledo Catedral, Spain 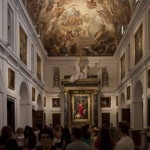 The gallery that holds the El Greco, Toledo Catedral, Spain 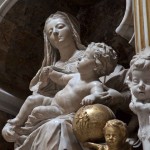 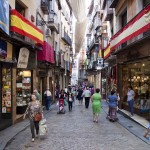 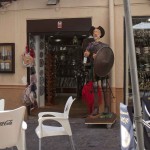 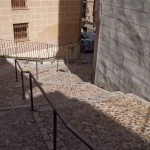 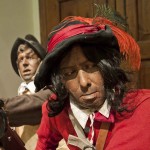 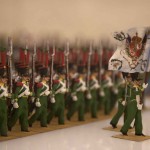 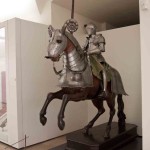 Excavations under the Alcázar, Toledo, Spain 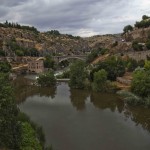 The approach to Toledo, Spain 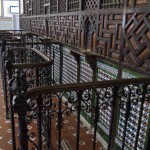 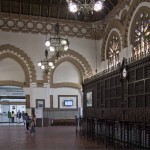 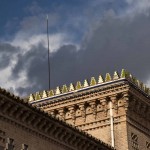 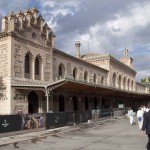