Our hotel in Madaba (Mosaic City Hotel) arranged a driver to take us to the King Hussein/Allenby Bridge Crossing between Jordan and Israel. His name was Jehad, and I nearly puked on the drive. It is a very windy road from Madaba down to the crossing, and he went like a racing car driver. He was never unsafe and he was trying to get us there as quickly as he could, but it was not at all pleasant.

It took us two hours from when our driver dropped us off to get through the border crossing at King Hussein. We did much research before our trip, discovering many conflicting versions of what was about to unfold. In the hall, we lined up for our passport drop-off and noticed people filling in slips of paper. Started chatting to strangers and John went back to where we first came into the building and collected a bunch of the slips for us and all the people behind us who also didn’t know we were supposed to fill one in. No sign with explanations or instructions anywhere.

Dropped our passports in at window number one and lined up at window number two, right next to the first. Lots of people ahead of us were asked to take a seat. The officer asked us where we were from and how many of us there were. Two was apparently the magic number, so we ducked across to the departure tax window and paid 10 JOD each and took our receipt back to the passport collection window.

We were then told to get on the bus where we would get our passports back. All of which is a little daunting, as we are all so intent on not letting them out of our sights! So we loaded our luggage on the bus and waited half an hour before it was time to move off. In that time, a guy came through and took 7 JOD per person for the bus trip and 1.50 JOD per bag (not that he bothered to check, you just paid for what you said you had on board). Once these other fees had been paid, another official called out our names to hand back our passports.

The experience on the other side of the border was fine, too. All bags went through the screeners, our passports were checked, the slip of paper was issued in lieu of stamps in the passport, questions were asked, and off we went. The no stamps in the passport thing is to assist those wanting to travel anywhere where a previous visit to Israel would be an issue. Israeli passport control was staffed by women, who were good at their job; very alert, watchful. The one we had was nice, the one next to us was getting impatient with the older Italians at her counter. They were a group of 6, but two of them had taken themselves to another window, which was complicating things. To make matters worse, both husband and wife were trying to talk at once, but the wife had better English, and the officer was getting the shits with hubbie talking over his wife. Understandably!

Once we were out, we met up with our arranged driver and guide, Jiries, at the taxi stand where he was letting out other clients. But he couldn’t simply put our stuff and us in the car and leave, he had to exit the area and reenter again before we were allowed to get in the car. It’s a monopoly on the taxis at the actual crossing, and they don’t like outsiders coming in like that. Making them exit and come back in seemed petty, but clearly there was a history of this ‘policy’.

Jiries drove us to Masada, about which I knew nothing. Quickly learned a whole lot from our knowledgeable guide, including that Herod built two magnificent, fortified palaces atop the mountain (between 37 and 31 BC). High end ‘everything’ all round in this creation, state of the art ‘this and that’; an impossible to imagine level of luxury and beauty, for the time, including central heating (hypocaust).

Years after Herod had ‘left the building’, during the first Jewish-Roman war, according to Josephus (first century Jewish Roman historian), there was an extremist Jewish splinter group called the Sicarii who fled Jerusalem and were resisting the Romans up on the mountain. The Romans built a big ramp up the side of the hill over the course of three months to invade the fortress. However, the Sicarii decided ‘death before slavery’, and drew lots to see who would be the executioners of the entire group (as it was a sin to commit suicide). There were 10 names drawn and they murdered their family and friends, and of the 10, another was drawn to finish off the other 9. So when the Romans stormed the place in the morning, they were met with silence and bodies – 960 men, women and children in total. Great story, but according to archaeologists, there is no evidence that a mass suicide occurred.

From Masada we drove to Qumran National Park, one of the most significant sites in both religious and general Middle-Eastern history. It is where in 1946 a lost Bedouin shepherd boy found the first of the Dead Sea Scrolls, revealed to be the oldest biblical scriptures ever found. “The 700 scriptures are titanic in implication, as they contained evidence of speeches by Jesus and ancient Jewish prayers, among others, and the Qumran scrolls also affirmed the foundations of Judeo-Christianity.” (www.igoogledisrael.com)

After this discovery, they also found the tiny settlement of the secluded sect of Jews called the Essenes, who believed they were the chosen people and segregated themselves from the rest of society to prepare for what they believed was an imminent apocalyptic war. They lived in peace and prayer, and apparently did lots of ritual bathing…maybe to cleanse themselves of the ‘impure’ thoughts brought on by lives of celibacy!

Our adventures in Israel continue with Jerusalem… 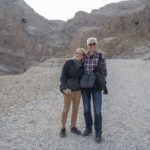 Nic and John at Qumran, Israel 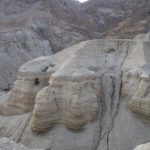 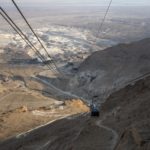 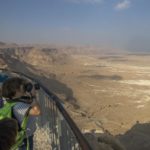 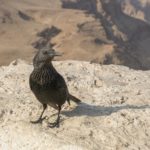 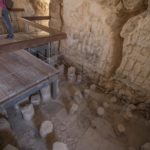 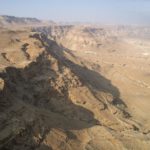 View from atop Masada, Israel 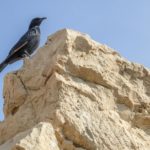 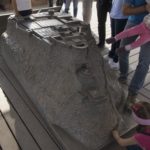 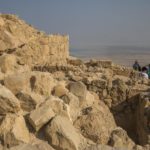 The ruins of Masada, Israel 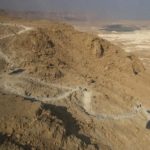 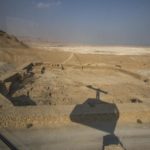 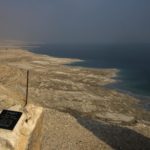 The Dead Sea, viewed from Israel