North of Jordan’s capital, Amman, lie some very important historical sites, so we arranged for the driver who had collected us from the airport to take us on a day trip. Admittedly, I had only really wanted to see Jerash as there was so much there, but Adli convinced us to include Umm Qais, which was right up near the border with Israel and Syria, and Ajloun Castle before heading to Jerash.

The journey took us through the milky grey limestone countryside, peppered with stunted olive trees; a landscape that we would soon discover was vastly different to the south. It was not unusual in Jordan to see butcher shops with whole carcasses hanging, often outside, but on our drive I saw one with three lamb carcasses hanging from the awning, and right next to this was a pen with about eight sheep in it, awaiting slaughter. Right next to their dead comrades.

At Umm Qais and were impressed with the ruins themselves, but not so much the notices at the important spots in the site – they were so worn by the weather that they were no longer legible. Luckily, I was armed with TWO guidebooks! One of the gems here was the mausoleum, which not many of the guides were taking their customers to – it must have been too far down the colonnade for them to bother. Not many people are keen on the long strolls through ruins; if it’s not within a sense of ‘immediate’ distance, they aren’t interested.

On our exploration of the site we kept meeting up with a friendly New Zealand couple, and we shared tips on spots not to miss amongst the ruins. It’s fascinating to meet other English speakers on trips and find out what draws them to the same places as us.

There were a couple of good vantage points along the way where you could see not only the scope of the town of Umm Qais, but also across into the distance to Golan Heights to the west and Syria to the east. Golan Heights is a volatile area, currently under Israeli military control, whose ownership is contentious issue between Israel and Syria. It was sobering to stand there looking across at this land, grateful not to live in a country where such violence and conflict is a part of life.

Finishing at Umm Qais we began what was supposed to be a 45 minute drive to Ajloun Castle that became an arduous two hour journey. There were road works that required a detour, but our driver refused to believe the detour sign until we were at a dead end in a limestone quarry! (By the way, there is limestone dust on everything in this country!). He then decided to find his own way and got lost a couple more times before we arrived at the castle.

While this was a fortress of some interest (built in the 12th century), it was tiny in comparison to other sites, and the weather was cold and windy. We only spent 20 minutes exploring, which surprised Adli, because he was half way through his tea and an electronic cigarette when we were ready to go. The tea guy offered us tea, but we were not eager – mainly because we were unsure of the toilet situation on the next part of the drive (although, refusing was probably a social faux pas, but we did smile and thanked him profusely for his kindness).

It was 1:30pm by this time, and we were getting peckish. Jerash was a 30min drive, and I suggested that once we arrived there that we might find some lunch. Adli said that as the site closed at 4pm, we would be better to go to the site and then eat at a leisurely pace after that. If only we had thought to say, let’s just grab a falafel pita (like the NZ couple did, we found out later at Jerash – they were there much earlier as their driver didn’t get lost).

So, minus an extra hour of sightseeing in our day due to a stubborn driver who refused to believe road works signs, we had our rushed 2 hours at Jerash. And we did rush, as you could easily spend 4 hours there without even trying, especially if you watched the 45 minute chariot race in the hippodrome. We caught the last 5 minutes of the show where they rounded the two chariots up and bowed for the audience (who I think paid extra to see it, but we just wandered in, clueless).

We moved on from the hippodrome and went to the South Theatre, which was huge (seating more than 3,000) and was a magnificent restoration; much of the back wall had been carefully restored and provided an ambient venue for concerts. Before we got anywhere near the theatre, we could hear bagpipes and drums playing. What a drawcard! They were great, the two guys playing, having a jolly time and making the transient audience feel very welcome (the tip box was within easy reach and they were happy when I voluntarily put some in there).

We continued down the colonnaded street of Jerash, once called Cardo Maximum, marvelling at what had been unearthed in this place, and what had been restored. Truly wondrous. The other theatre at the opposite end of the city (aptly named the North Theatre) was much smaller, holding ‘only’ about 1,700 people. The marble flooring in the orchestra area had been meticulously restored, and the entire theatre felt surprisingly intimate, despite its audience capacity.

We had used our two hours wisely at Jerash, and asked to be taken to Artemis for food. Adli was going to suggest another place, but I really wanted salads and tabouli, which he couldn’t guarantee me, so we went to Artemis. He had told us that it was a buffet, and we had read in the guidebook that they did a regular menu as well. But the guidebook was out of date (as they often are), the place had moved and, as usual, we did not get our money’s worth at the buffet. Oh well, the food was nice, it was just overpriced for what we ate. I think Adli felt rushed because we did not linger over dinner. We had our one and only visit to the buffet, and that was enough for us. We certainly did not get our money’s worth, and wished we had grabbed a falafel on the go at lunchtime instead.

When picking us up from the airport on our first day, Adli had asked about our plans. We told him of our hire car booking and driving ourselves to Petra. He asked how much it was going to cost us, and I told him. Today, he came with a quote for him driving on that part of our trip, which was double what it was costing us. We thanked him for his offer, but refused, saying we were writing a road trip article, and gave him my card. We paid him the agreed amount for his day’s work (70 JOD for the day, about $130 AUD), but did not tip him – getting lost and adding over an hour to the trip was not good business. As a professional driver how would you not know about long standing road works on the major road to a major tourist site? Surely you would suss that shit out. The driver for the NZ couple went another way altogether. Even if we had not already booked and paid for our rental car, this day’s experience did not do much to impress us, despite him being a lovely human being. 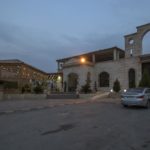 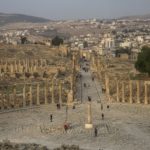 View to the north from the Cardo Forum up the Cardo Maximum, Jerash, Jordan 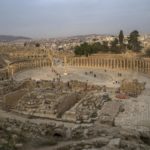 View of the Cardo Forum from the south, Jerash, Jordan 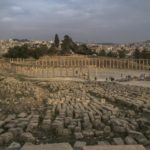 View of the Cardo Forum from the west, Jerash, Jordan 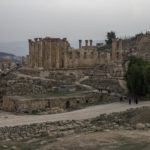 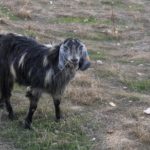 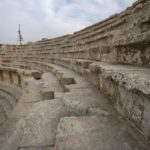 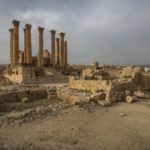 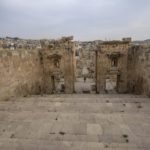 Stairs to the Cathedral at Jerash, Jordan 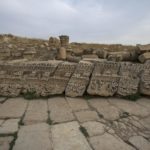 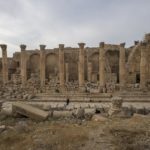 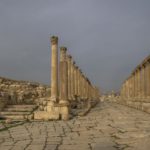 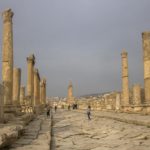 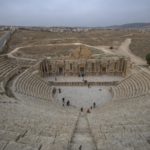 North Theatre from the back seats, Jerash, Jordan 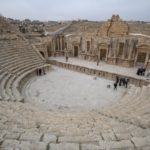 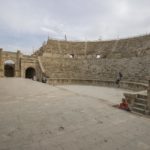 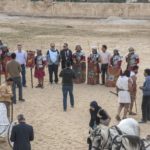 Mingling with the stars of the chariot performance, Jerash, Jordan 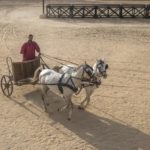 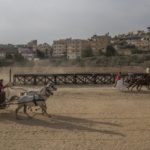 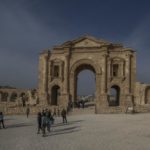 The gate to the ancient city of Jerash, Jordan 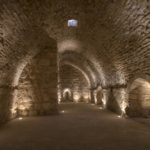 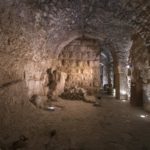 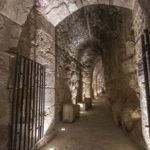 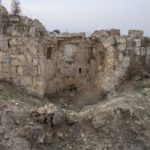 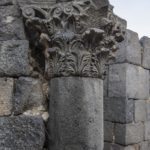 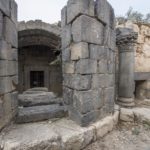 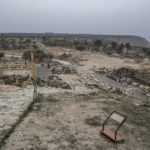 The ruins of Umm Qais, Jordan 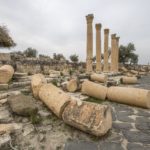