Heaton’s Guesthouse is a cosy little place, nice, clean, comfortable rooms and a fantastic chef – although he now only does breakfasts, not the dinners that are raved about in the guide books (dammit!). The porridge is one that Nic had been hanging out for since she read about it on the website – served with brown sugar, cream and Drambuie! They make quite a show about the porridge presentation and serving – the server scoops the brown sugar onto the pile of steaming oats then drizzles the Drambuie on top so it dissolves the sugar, then pours the fresh cream over the top – flamboyant and fabulous! And if this wasn’t enough for breakfast, we succumbed to the eagerness of the staff with their dish of the day, and we were SOOOO glad we did. It was poached eggs nestled on a bed of sautéed spinach atop a savoury muffin (with a hint of the bagel to it) with Dijon mustard sauce drizzled over it, with a fine supporting act of grilled tomatoes with pesto and balsamic vinegar (available with ham for the non-vegetarians). Bloody beautiful and easily the BEST breakfast we’ve had in Ireland – astounding!
Mid-morning we headed off with our trusty guide books in hand for our self-guided tour of the Dingle Peninsula Loop. Quite like doing it freelance – no hoards to hold you back or push you forward when you want to linger, and no tour guide forcing you to visit gift shops you have no interest in purchasing fridge magnets or key rings from! 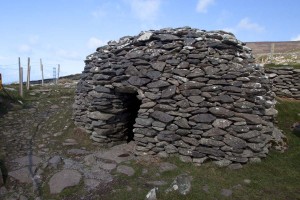 Exterior of bee hive hut (the top has been reconstructed – and not as neatly as the 4,000 year old bits!)

The first point of interest was, in fact, across the way from our B&B – Milltown House B&B – Robert Mitchum’s home for a year during the filming of Ryan’s Daughter. Don’t worry, while there will be one other site connected to the making of this film, all of the other places of interest will be more historically significant (and far more ancient!!).
There was an amazing cluster of bee hive huts, or clochans – mysterious stone igloos that cluster within a circular wall – that dated back a couple of thousand years BC. Apparently, the earliest evidence of human life on the island of Ireland is 4,000BC. I know it’s not as impressive as the history of the Australian Aborigine, but it’s enough to impress us pasty white anglos!
There were also plenty of opportunities to gaze on the Ring of Kerry and Blasket Islands from several vantage points on the drive. The Blaskets are a group of islands with a fascinating history, and while the weather didn’t allow a visit across to the main Blasket Island, we had a very informative and interesting tour of the Great Blasket Centre. Great Blasket, the largest Island, was inhabited by up to 200 people for at least 3 centuries until 1953 when, “with no school, shop, priest or doctor, it was finally abandoned’ (Rough Guide). In the centre there is an amazing recorded history, in interviews and writings, of these people and their islands. Truly fascinating.
The second Ryan’s Daughter film reference (Nic really has to get around to seeing this film!) was on a desolate cliff top. We parked the car and walked through grass to a house with a verandah whose roof was missing and the wind was howling through the gaping holes in the walls. We thought that this was it, but on consulting Rick Steves, we realised that going through another gate and traipsing down the hillside, would lead us to the shell of what was built as the schoolhouse for the film. This skeleton appears to cling to the side of the bleak and empty landscape, eerily resolute – although a film set, it has outlasted more permanent structures around it. As John was taking photos, Nic looked at the sky and screamed, “John! RAIN!!” – We had made the terrible mistake of venturing forth without umbrellas, and so had to run up the hill to the car (no small distance!). Not as soaked as the day with the hail storm – maybe we are getting fitter . . . or maybe we are learning to read the warnings in the sky more accurately!
Lunch was had at a nice little pub called Ceann Sibeal Hotel in a village called Ballyferriter – lovely bowl of tomato soup with soda bread. Perfectly simple and very tasty. We were very amused by some British tourists (hip young old things) who asked the barman with disdain, “Is this the whole menu??” (which actually contained 4 or 5 starters AND 4 or 5 mains, all warm, interesting options) – they were not going to get a wider choice anywhere within 30km – beginning of the season, and all that! But you can bet that they would’ve just gone for the toasted sandwich at another café, just so they didn’t have to lose face by coming back to the pub!
Gallarus Oratory was a very unique historic site – it was built 1,300 years ago and is one of Ireland’s best-preserved early Christian churches. It looks like an upturned boat, and the stonework bears more than a passing resemblance to that of the Inca’s in South America (mainly for the snug way the stones fit against each other – and it’s still waterproof!).
The rest of the day unfolded in a leisurely manner until we ambled back to our digs for some brief moments of relaxation before scooting off to The Bull’s Head for dinner (rated #1 on TripAdvisor). We had a chatty waitress who kept us excellent company (for, once again, we were the first people in the joint!!). We had begun with our great undoing in every restaurant we’ve been to – the amazing breads and dippy bits! This was followed by hake cooked with vegetables, sun-blushed tomatoes, herbs, garlic & white wine; oven-baked salmon fillet topped with a light breadcrumb and rocket pesto.  But the highlight was the side of carrots tossed with crispy, caramelised onions and cabbage in olive oil.  Could’ve just eaten the bowl of carrots! We finished with a cheese plate – the highlight of which was the dillusc cheese (seaweed) – nice and pongy! Good choice!
Since we dawdled over dinner, we went from The Bull’s Head straight to The Courthouse for the live music. The fabulous thing about choosing this venue is that they had a special weekend of music that started at 4pm and was going all afternoon and evening. When we first arrived there was an amazing female vocalist with a unique breathy voice and great tone (didn’t get her name), accompanied by a young fella on a guitar. Both were ‘close your eyes in pleasure’ good. Then the same guitarist supported an agile fiddle player who got everyone’s feet tapping and a number of whoops going. The final set we stayed for just happened to be a guy called Eoin Duigan – the Irish pipe soloist on a CD we had bought only the day before! Freaky! An excellent night!! One of the nicest things about this venue and the day of music they were celebrating was that between sets, people just burst into song in the pub – so cool and fun! John was very impressive with his tricky harmonies!