Ah, the adventure that is Cuba! The beginning was not auspicious. Weighing our luggage at Mexico City airport caused some delay – a strict 25kg per checked bag, and 5kg per carryon policy presented a problem. Cuba allows 50kg per person in checked luggage, but there is a limit to the weight of individual bags. So we slunk away to repack, purchased another bag for the hold that we stuffed full of things that wouldn’t devastate us if they went missing, and headed back to the check in desk. We were so lucky to have a kind and patient staff member from Cubana Air dealing with us – our clear look of terror at the prospect of John’s 8kg carry on full of camera gear being relegated to checked luggage gave her pause, and she allowed that one through. She must get disorganised tourists a lot!

We had been warned by other travellers recently returned from Cuba that there would be delays at the luggage carousel. They said up to 3 hours wait for bags, which seemed crazy. But when we realised that all ‘unaccompanied’ luggage was unloaded first, it made more sense – pretty much everything that is not manufactured in Cuba comes in through Mexico, so a never-ending stream of gigantic gladwrapped bundles and battered cardboard boxes filled with essentials came tumbling out on to the moving belts in mini mountain piles in wait for their claimants. And the wait for our bags was only 2 hours. At least they arrived!

After a delayed flight of an hour and the extra time for claiming luggage, it was such a relief to see a tall silver-haired gent holding a sign with our names on it in the arrivals hall. Alejandro (husband of our host, Hilda) immediately put us at ease with his broken English, and even with the language barrier his dry sense of humour was apparent. When making small talk on the drive to the casa, we asked if anything had changed since the US embargo had been lifted, his response was, “Alejandro one year older!”

We were driven in a red 1974 Fiat in a direct route from the airport to our Old Havana casa particular, with Alejandro gesturing to points of interest as we passed. So glad we went with a casa particular (a regular home that rents rooms to travellers) instead of a government owned luxury hotel. This way, we got to see the real Havana, and our money went to regular people “making their own way” – an often used phrase to explain why things function as they do in Cuba.

When we turned off the main road into the northern tip of Habana Vieja we were surprised to see collapsed buildings, dump trucks, rubble and torn up streets. Alejandro gestured to it all and said, “No Sarajevo, esto es Habana!” Alejandro’s allusion to a war-torn place from recent history (and a connection to Russia) made us laugh – the 1990s are closer to those without easy internet access to supply them with a contemporary reference. But there was no war, only government contractors digging up old gas pipes in preparation for installing new ones, and crews demolishing buildings no longer deemed safe.

Hilda and Alejandro only have one room that they rent out in their house in a quiet corner of the old town – Casa Hilda y Alejandro. As with most private homes in Havana, it is simple and neat and a 1950s time capsule. Hilda is an excellent housekeeper and our room was immaculately clean – our ensuite bathroom was 20 years old, but looked new, it was THAT clean! And it was very reassuring to be looked after so well in a place far removed from all that is familiar and taken for granted.

It’s not possible to obtain Cuban currency (either the local or tourist money) outside of Cuba. On Hilda’s advice, we didn’t change our money at the airport, but intended to go to a money exchange or bank to sort it out when we arrived (at the time of travel, ATMs still didn’t work for foreigners). To make things easier for us, our kind hosts loaned us $100 CUCs (the currency for tourists, valued at the same rate as US dollars) to tide us over until we could get to a bank the next day. Most convenient.

We headed out to explore our new neighbourhood and find something to eat (having had no proper meal since lunch the previous day made for two hungry tourists by late afternoon). We found Habana 61 (on both Hilda’s and my TA list of recommendations) – a very tiny and hip restaurant near our casa in Habana Vieja. The décor was rather fancy, “free world” vibe and all that, clearly aimed at visitors. Could’ve been walking into a funky restaurant in any capital city, which worked on the comfort and familiarity levels. We had cocktails, shrimp in Cuban sauce, salad, rice & beans for $20. And that’s in a fairly flash venue! While $20 was expensive for locals, it was very reasonable for tourists, and that’s their target market.

Hilda had warned us about the various scams that could be played out for us, one of which is someone saying, ‘Please buy milk for the children.’ They take you to a shop to buy the milk and when you leave, they take the milk back to the store for a “cut.” As the government gives each child one litre of milk per day, the milk-deprived child story is rubbish. When we bought some bottled water in bulk for our stay, a random guy who attempted to aid our search to find peanuts tried the milk scam on us. ‘No gracias!’

We hit one of Hemingway’s many haunts in the middle of the old town – Floridita. There are quite a few cities that we’ve visited around the world that have a strong link to the Nobel Prize for Literature winner. The man was a genius lush…or a lush genius. The place was packed, but we elbowed our way to a corner table just as some people were leaving. It was a prime spot with a great view of the bar and the band, and we immediately ordered some daiquiris in Hemingway’s honour (unfortunately, not as good as the ones we had at Habana 61). The moment we settled in, the band went on break. Timing. At least there were some loutish, drunken, 20-something year old men who provided entertainment until we had finished our drinks and we decided to move on (they were grateful for empty seats in which to haphazardly slump). We grabbed a couple of pics with the bronze life size statue of Hemingway leaning on the bar as we left. I’m sure he would’ve been as equally entertaining in his drunken jollity as those so grateful for our vacated spot in the corner.

We wandered the darkening streets, surprised not by the lack of street lighting but by the feeling of safety. Kids were still playing and vendors were selling their produce in very dim lighting – there was a strong sense of small community about the little area of Habana Vieja, which was to be our home for only 3 nights. The still impressive (if crumbling) architecture surrounded us, but as we approached our casa our attention was on trying to dodge potholes and dog turds. The building admiration could wait until daylight, and so we arrived home sustaining no injury or messy shoes. 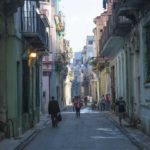 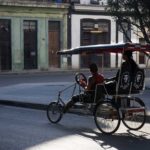 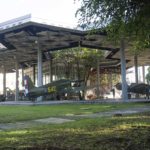 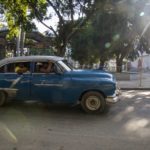 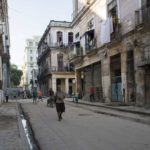 Side street near our casa, Havana, Cuba 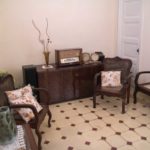 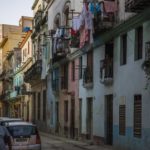 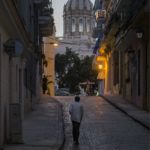 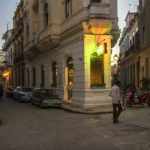 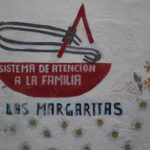 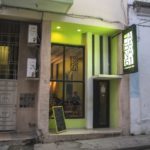 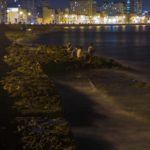 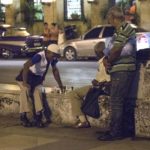 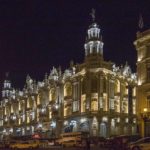 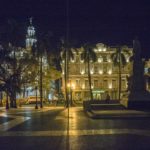 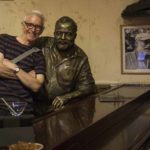 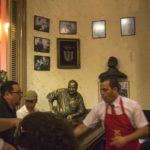 Bronze Hemingway in the corner of Floridita, Havana, Cuba 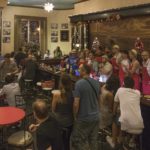 Tourists posing with the bartender at Floridita, Havana, Cuba 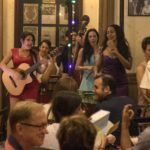 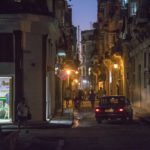 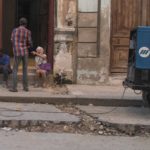 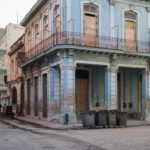 Near our casa particular, Havana, Cuba 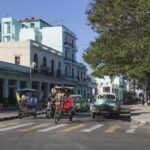 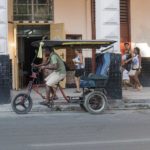 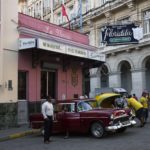 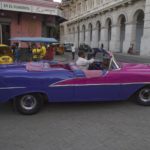