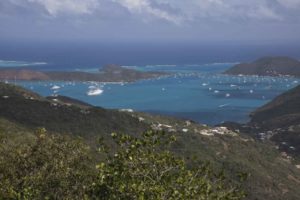 Of all the stops on this two week Caribbean cruise, THIS is the place that appears to be the perfect retreat for the rich and famous, but in a secluded and private way. And I am sure that all the dots of land in the British Virgin Islands are similar.

The capital of Spanish Town is nothing much at all. It has the scale and infrastructure of a tiny NSW coastal town of 50 years ago. It seems that the island pretty much exists solely for those who can afford to build exclusive, flash houses and have everything they desire brought to them from wherever in the world it lay. Richard Branson’s Necker Island is off the north coast of Virgin Gorda, and at $20,000 per night to stay there, you can image the level of wealth that is hidden in the various pockets of this archipelago.

It did take us a while to actually get ashore, though. John went early, just after 8am to sort out the hire car, and due to the rough seas, we didn’t join him until about 9:30am (they were taking a while to get us aboard the tenders – only because they were very mindful of passenger safety, and rightly so).

When we finally joined him, we drove around all of the island, heading north first in the hope of avoiding some of the crowds at The Baths. We ended up on the point between Great Ghut Bay and Leverick Bay where we parked and checked out the very intimate and compact Leverick Bay Resort. We savoured a cocktail on the beach, which was better than anything we’ve had on ship – top dollar results in higher quality and quantity of the alcohol.

Meandering at our leisure, we drove from lookout point to lookout point, taking photos and gawping at the beauty. We made our way south to the big attraction – The Baths – the area where gigantic rocks look like they have been plonked there by a giant playing with the building blocks he got for his birthday. It’s quite a tiny beach area, and while our companions sat in the sand and paddled in the warm waters, we walked, climbed, and ‘ducked’ our way through the “caves” (not really caves at all, just the boulders in their clumps).

It was obvious what all the fuss was about, it was like being in little chapels created by nature. The light streaming in through the gaps in the rocks, glinting off the moving shallow water and highlighting the colours of sand, earth and moss in the boulders, was reminiscent of light boosting the colour of stained glass windows in a church.

We were glad of our previous diversions that morning, as it meant that many had been and gone, so we managed to get some solo moments in cavernous bits. We clambered out of the series of grottos on the other side at Devils Bay Beach, but didn’t choose to linger. It had started to rain by this point, and as we had nothing but our hats and John’s camera, we protected it as much as we could and walked as briskly up hill as possible back to the car and the others.

The rain did not stay for long, and we continued our explorations of Virgin Gorda at the beach just north of The Baths – Spring Bay Beach. This became a particular favourite, and we were glad of a bit of pre-trip research that pointed us in its direction, away from the crowded popularity of renowned The Baths. Spring Bay Beach had similar beautiful rock formations and lovely little pockets of sandy shore for swimming, but had very few people. We almost breathed a collective sigh of contentment here, splashing about in waste high water, with faces turned to the sun and our chatter carefree.

It was a mellow drive back to Spanish Town. Returning the car was simple – we left the keys under the mat as instructed, and walked across the carpark and hopped on a tender. Simple. As the tender had only just arrived, we did then have to sit on it for 25 minutes while waiting for it to be filled with other passengers…but we were on island time, so it was all good. Even our disappointment at missing the lunch buffet was placated by freshly baked pizza, available 24 hours a day.

With bellies full of pizza, our initial NYE preparations consisted of reading and dozing by the pool. It was only after naps that we had the energy and motivation to ‘glam up’, ready to party the night away for our special ship celebrations to see in 2016.

Before time had the opportunity to dim our glamour, we posed for the obligatory ‘formal shots’, looking all a bit ‘Year 12 Formal’ or ‘Christmas Card Cover’. Of course the many official photographer photo ops (embarkation, disembarkation in port, formal nights) are designed to tempt you to spend a significant amount of money on the memories of your cruise. And, of course, you don’t really find out the damage until you have gathered your bounty of printed pics and taken them to the cash register to discover the price…and then you put most of them back. Clinging to the one or two where photoshop has tweaked you to look more fabulous than you ever do in real life, which means they are the ‘must haves’, you make your purchase – charge it to the stateroom, thank you.

So, all glammed up, we sashayed our way, post photoshoot, to the Club Bar for aperitifs before moving through to the dining room. Our percentage of glam was ‘upped’ by the distribution of party hats at the door to complete our ensembles. More men than women were willing to don such millinery – most were not wanting their hair messed with!

The chef and kitchen made an extra special effort with our dinner, which was beautifully presented and tasted delicious. But the downside of the high expectations on such a festive evening was some waiters were more than a little stressed and frazzled in their efforts to make things perfect. Here is a tip, dear waiter: if you are letting your guard down and let drop more than a few complaints about the awful night you have having to your table, then this impacts on the guest’s enjoyment. Not cool, my friend.

After dinner, we headed to the Cabaret Lounge in our quest for good seats for the show. We had become fans of the little team of dancers, who were not only talented, but very sweet individuals, and were always up for a chat when wandering about the ship. Being fit and motivated, we did not dawdle on our walk to the other end of the ship, and were rewarded with front row seats. Unfortunately, other passengers were not impressed by the lack of free seats in the front row by the time they arrived. While they were not as lithe and agile as some individuals in our party (and thus arriving at the Cabaret Lounge in record speed), it may have been wise for them to at least be kind, instead of making nasty, complaining comments designed for specific ears. Maybe then someone might have offered them a better seat, but meanness and bitterness is never a good look, and it would have clashed with our upbeat outfits on this lovely evening.

The Ocean Princess dancers once again proved themselves as impressive, energetic and entertaining talents, and after the show we attempted to fortify our resolve to last beyond midnight by having a rest and a chat in the Club Bar. The quietness of the bar, with no servers or other guests, just us reflecting on the passing year and the expectations of the coming one, proved quite contemplative and philosophical. The padded leather lounges and our full bellies from dinner put us in a deep and relaxed mood of reflection, which was almost soporific. No! We had to garner energy and motivation, and get up on that pool deck, find our new friends, and ring in that New Year with champagne and joyous salutations!

And that’s what we did. We found our pals pulsating near the band, charged our glasses and joined in the loud countdown to 2016. Success! Made it to midnight! Kisses and guzzling of champers, big grins and even bigger hugs all round. We even managed a few dances before discreetly seguing into the late night buffet for some guacamole and salsa before heading back to the stateroom. We made it to 1am, which is a pretty solid damned effort.

Our final two days on board during the sail back to Miami was as it should be – reading, playing trivia, eating and drinking (although, packing took up a fair bit of time, too!). The Ocean Princess may not be one of the imposing behemoths that now grace the world’s oceans, but she is a petite grand dame, worthy of respect and the setting of many fond memories for the thousands who have sailed in her. Such a shame that she is being decommissioned by Princess. But the bottom line is always the bottom line, and small cruise ships do not rake in the money of their flashy, gigantic, younger sisters. 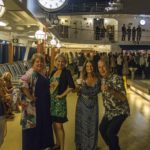 Made it to midnight, Ocean Princess, NYE 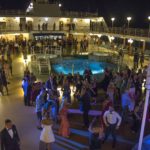 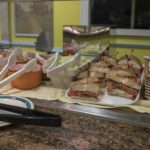 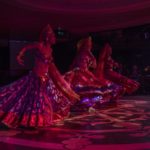 A taste of the exotic, Ocean Princess, NYE 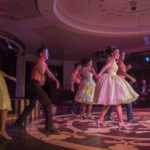 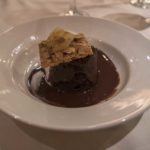 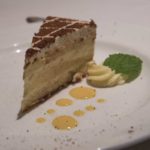 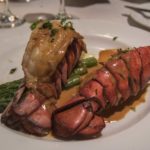 No stinting on the lobster main! Ocean Princess, NYE 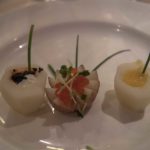 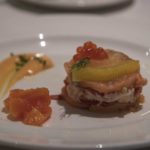 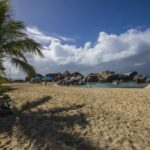 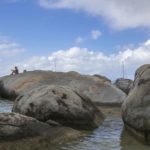 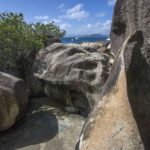 Emerging from the walk at ‘The Baths,’ Virgin Gorda, British Virgin Islands, Caribbean 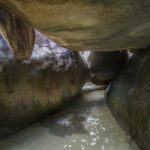 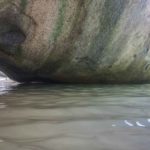 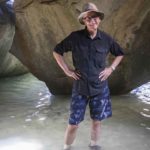 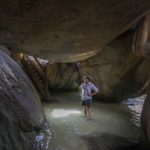 Middle of the walk at ‘The Baths,’ Virgin Gorda, British Virgin Islands, Caribbean 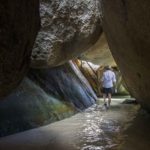 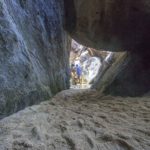 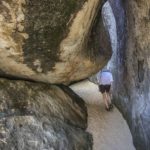 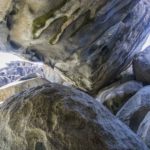 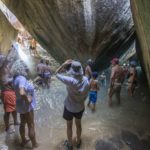 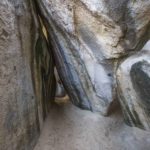 The entrance to the rock walk at ‘The Baths,’ Virgin Gorda, British Virgin Islands, Caribbean 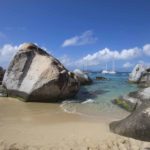 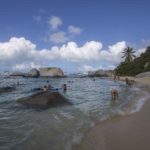 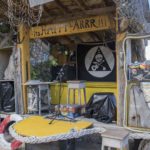 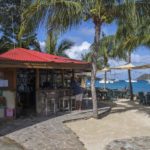 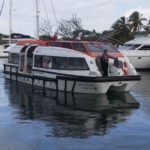 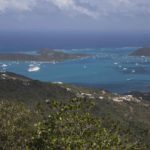