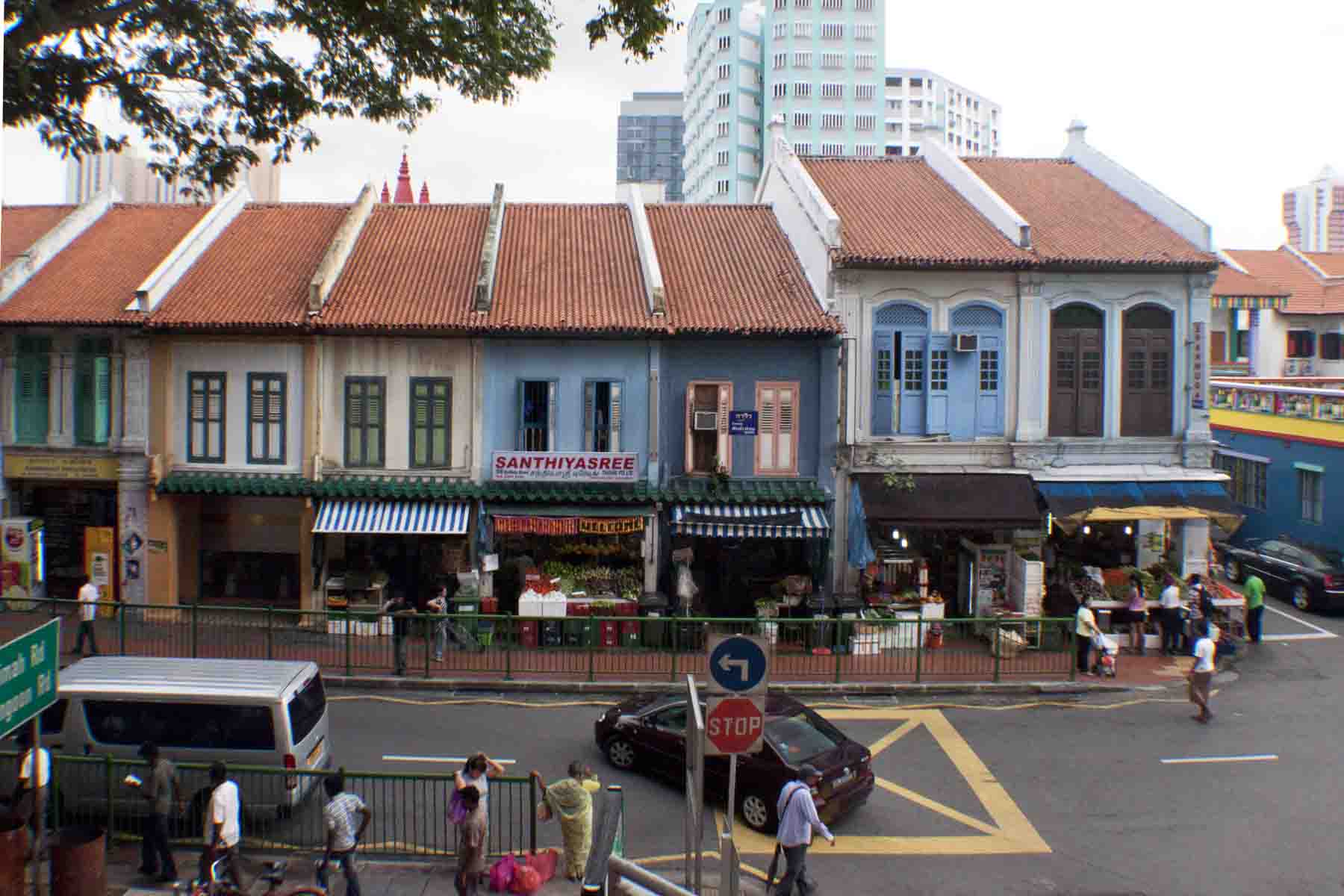 Little India was as colourful, charismatic and full of exotic aromas as we expected. We began our walking tour by having the taxi drop us at the Tekka Market on Serangoon Rd, that houses everything from textiles and watches through to the wet markets with hundreds of varieties of seafood and the butchers selling their goats heads. Pass, thank you. 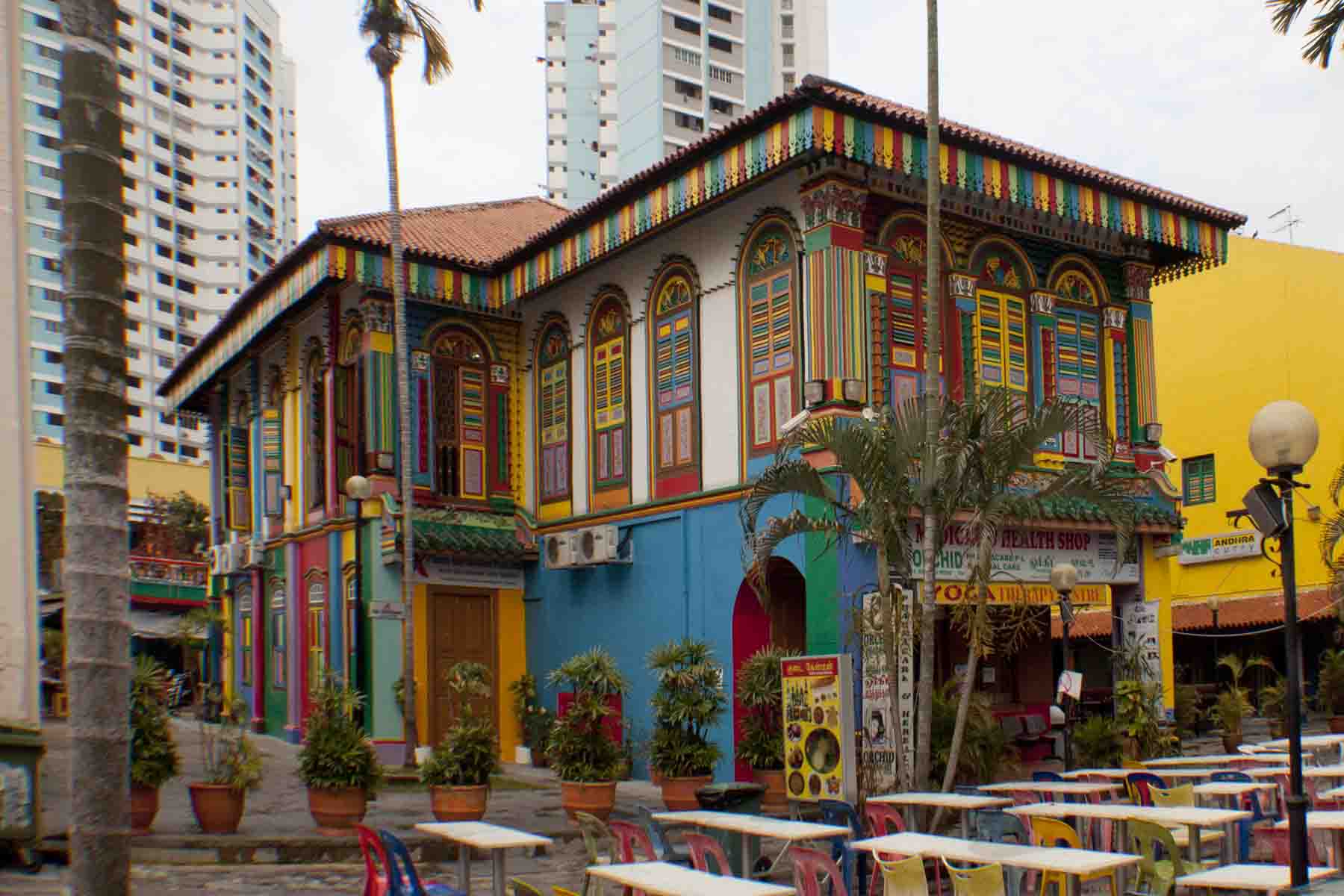 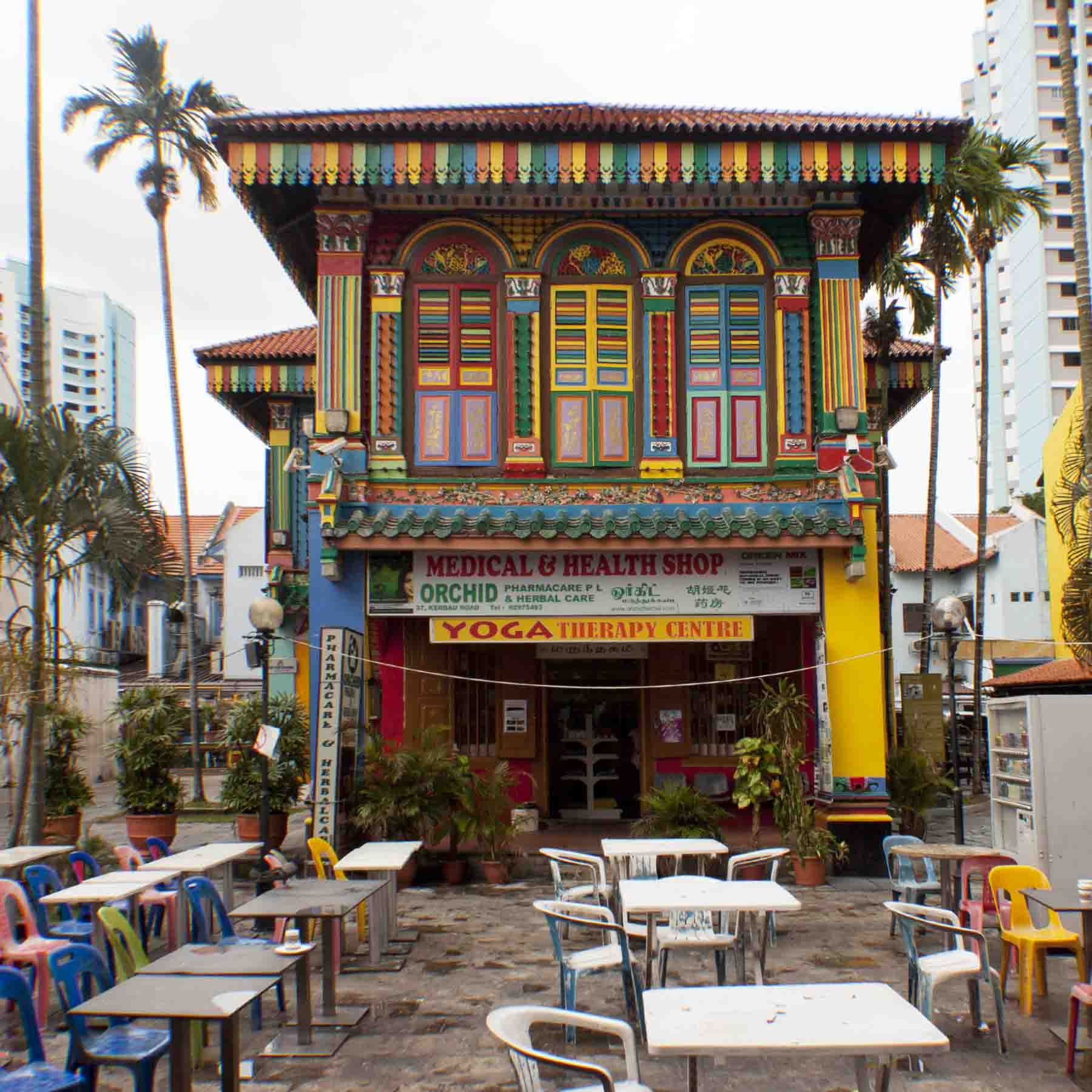 The Chinese Villa from the front

Outside of the markets and back in the vibrant streets the atmosphere is still quite tame – it appears, like most of Singapore, that it would spring to life in the early evening through to late, but we are happy with the pace we are going and the lack of people pressing. Kerbau Rd yielded some meticulously restored shophouses, the perfect home for the “arts belt.” There is a renovated Chinese villa at no. 37 – difficult to miss with its array of primary colour painted shutters, ornate eaves and doors. Close by is the Sri Veeramakaliamman Temple dedicated to the Hindu goddess, Kali. 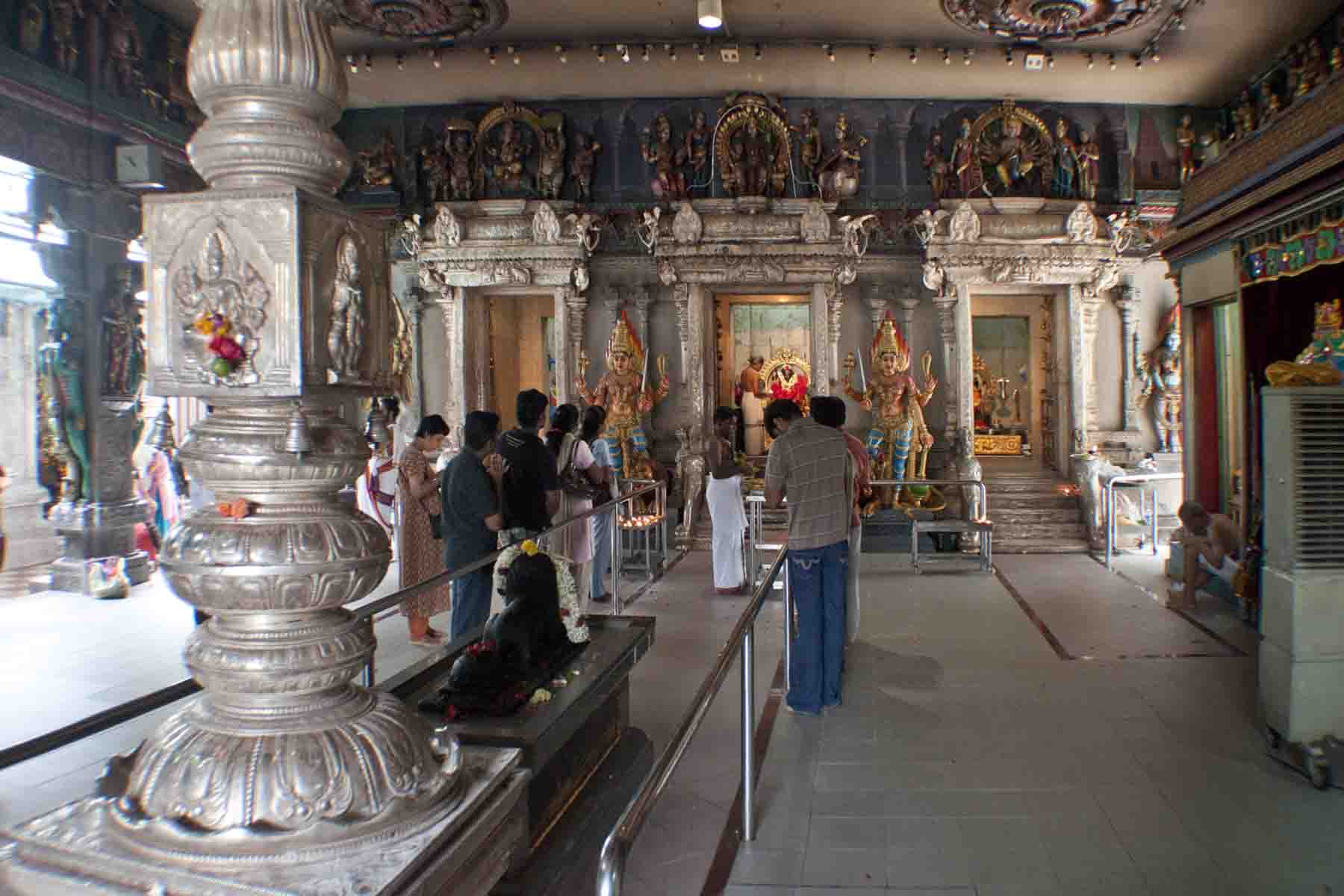 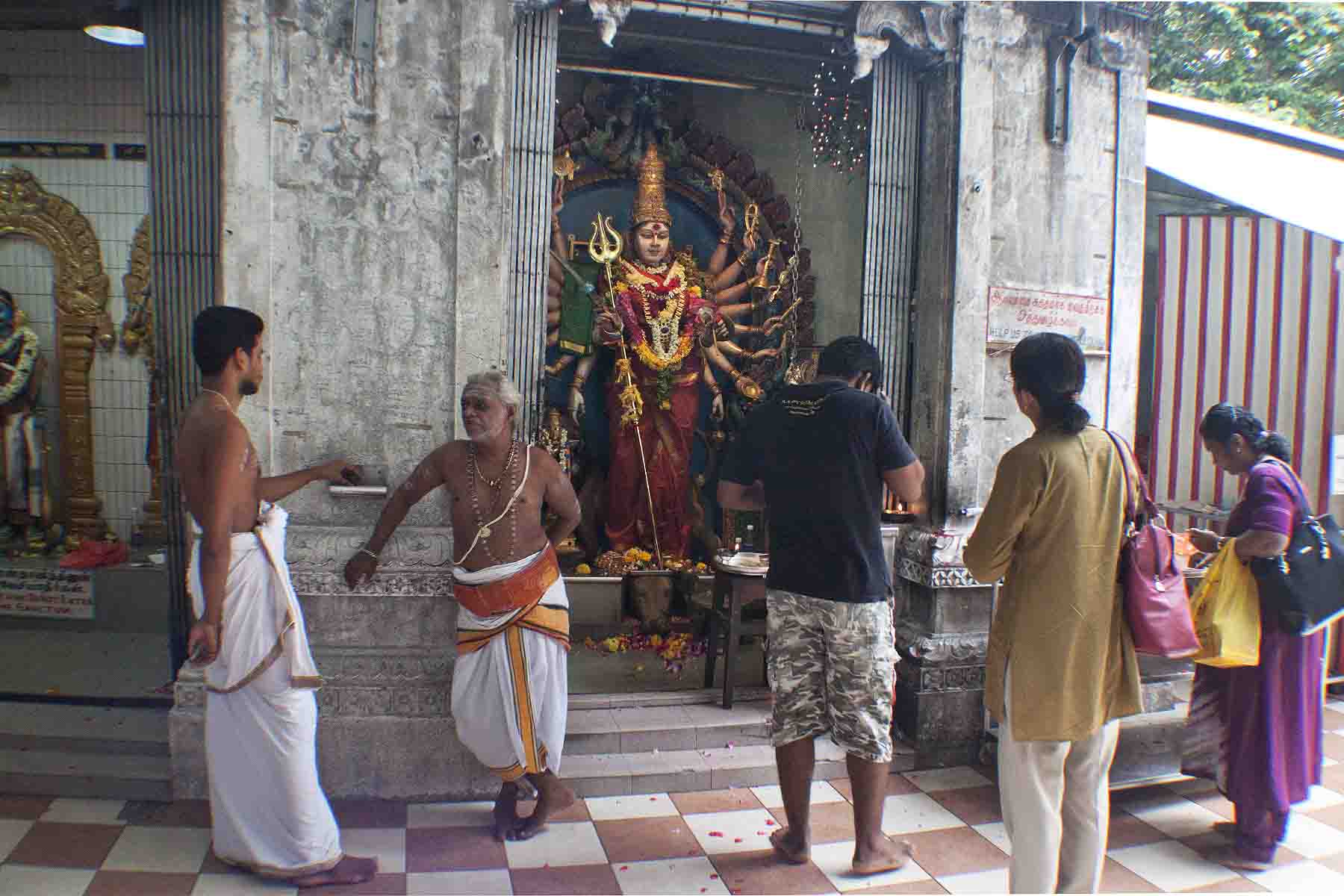 One of the deities in the temple

Little India Arcade in Serangoon Rd lives in a resorted block of shophouses – Little India in microcosm – here you can get anything you desire from Indian sweets to CDs and ayurvedic medicines. Just down Dunlop St is the beautiful Abdul Gaffoor Mosque, set amid gardens of bougainvillea and palms contained in a lovely courtyard. Renovated shophouses next to the mosque have been converted into an Islamic school.

Kali – in all her bloodthirsty glory

We continued our stroll down to Arab St (past the old thieves market) where the area of Kampong Glam comes alive with its tailors, hawkers, rug merchants and souvenir stalls vying for your business, amongst the pretty setting of palm tree lined streets and cool cafés. Out stroll led us to Ruman Makan Minang restaurant on Kandahar St, where for the first time, Nic was confronted by a non-toilet paper, only-hose-equipped loo. The room looked like someone had had a shower in it; it was that wet! Pass, thank you! Held it till she found a toilet with a door that shut and was equipped with poo-tickets, thank you very much! 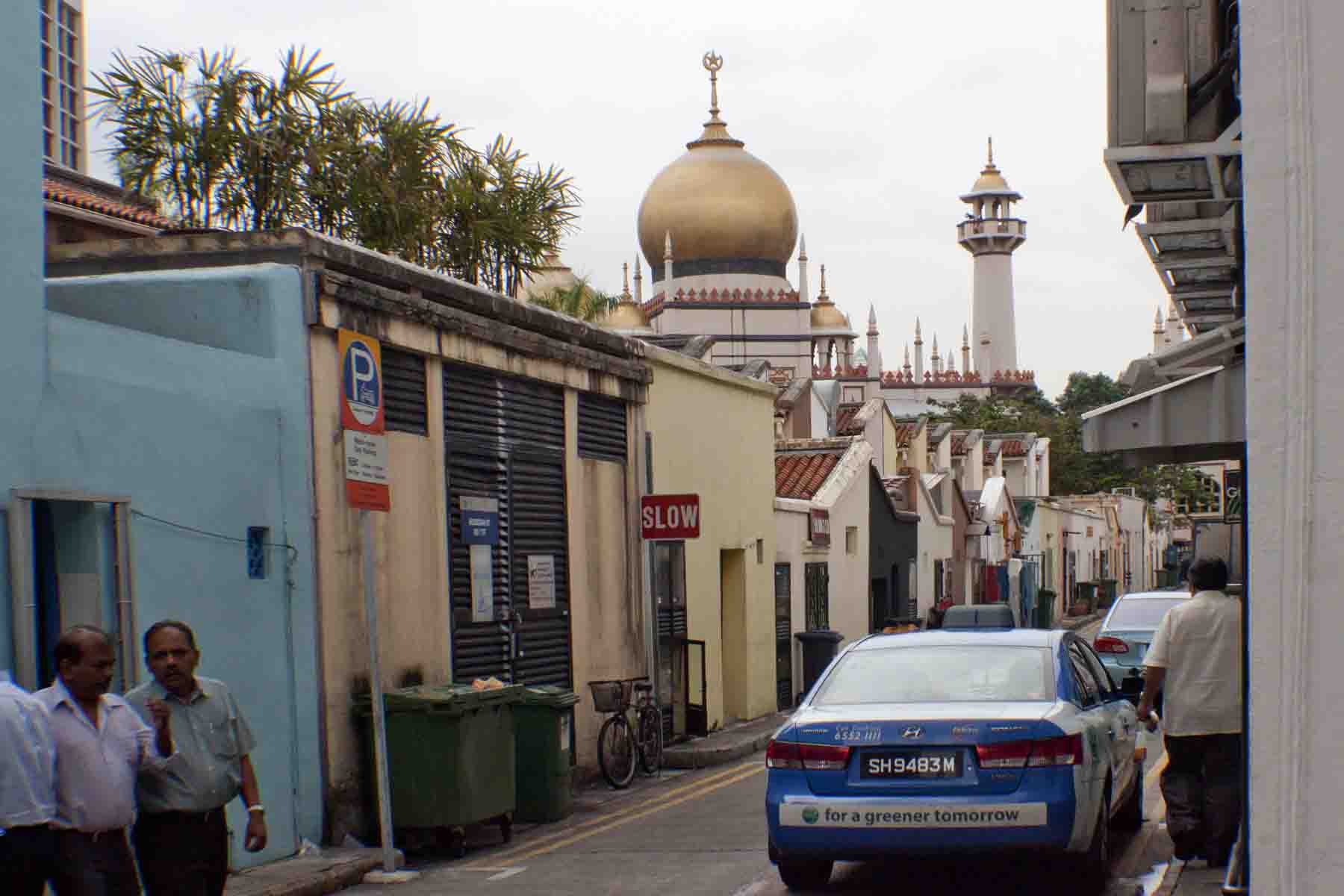 The golden dome of Sultan Mosque 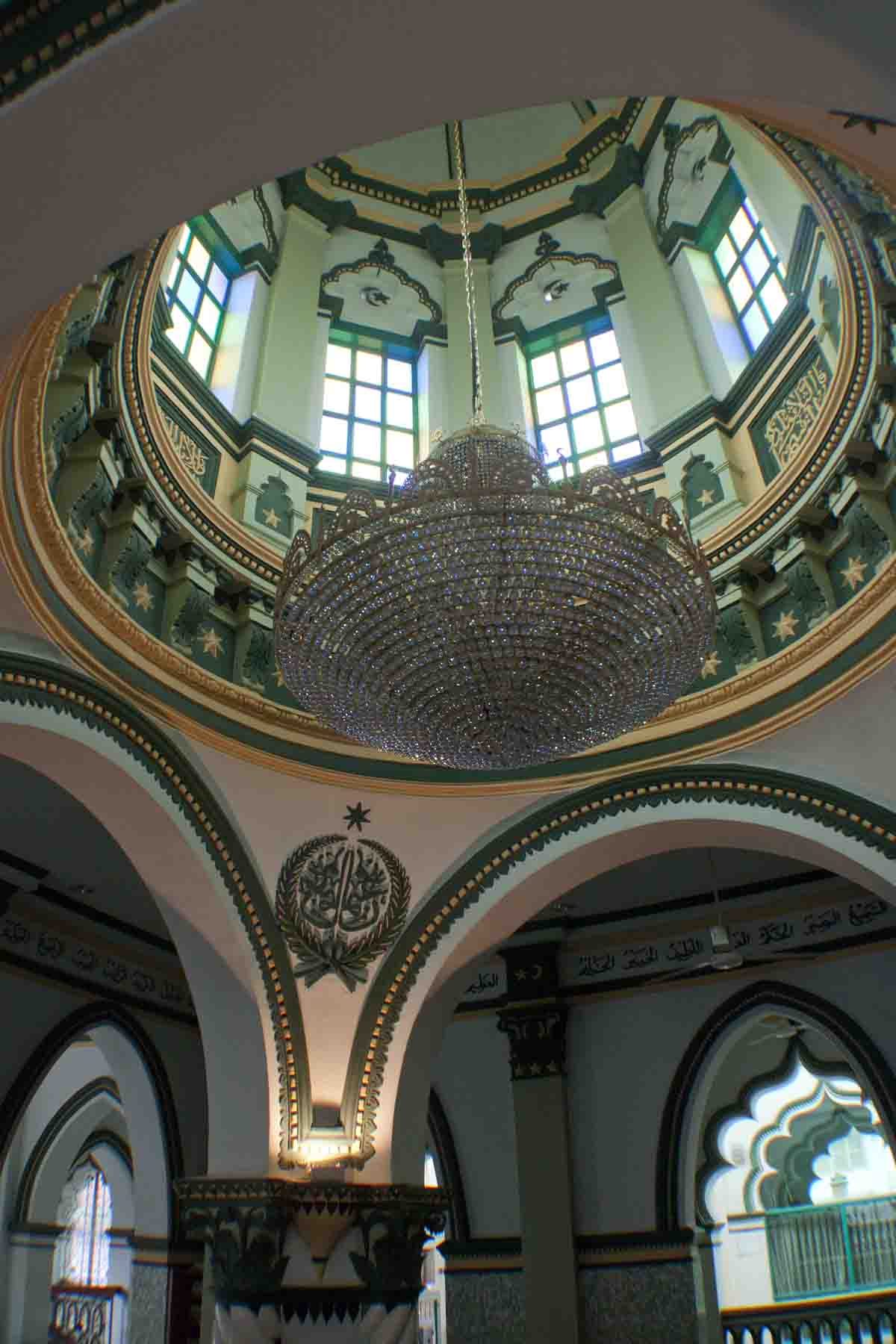 After lunch we wandered to the Sultan Mosque, which, unfortunately, was closed to tourists between 12-2pm…bugger…so we just admired the gorgeous architecture from the outside and continued our stroll down Bussorah Street, and then into the very cute, yet cool and arty, Haji and Bali Lanes. There was also a very pretty, if neglected, old cemetery in the vicinity, which provided John with more photo ops. From there we decided to call it a day and headed back to the Novotel. 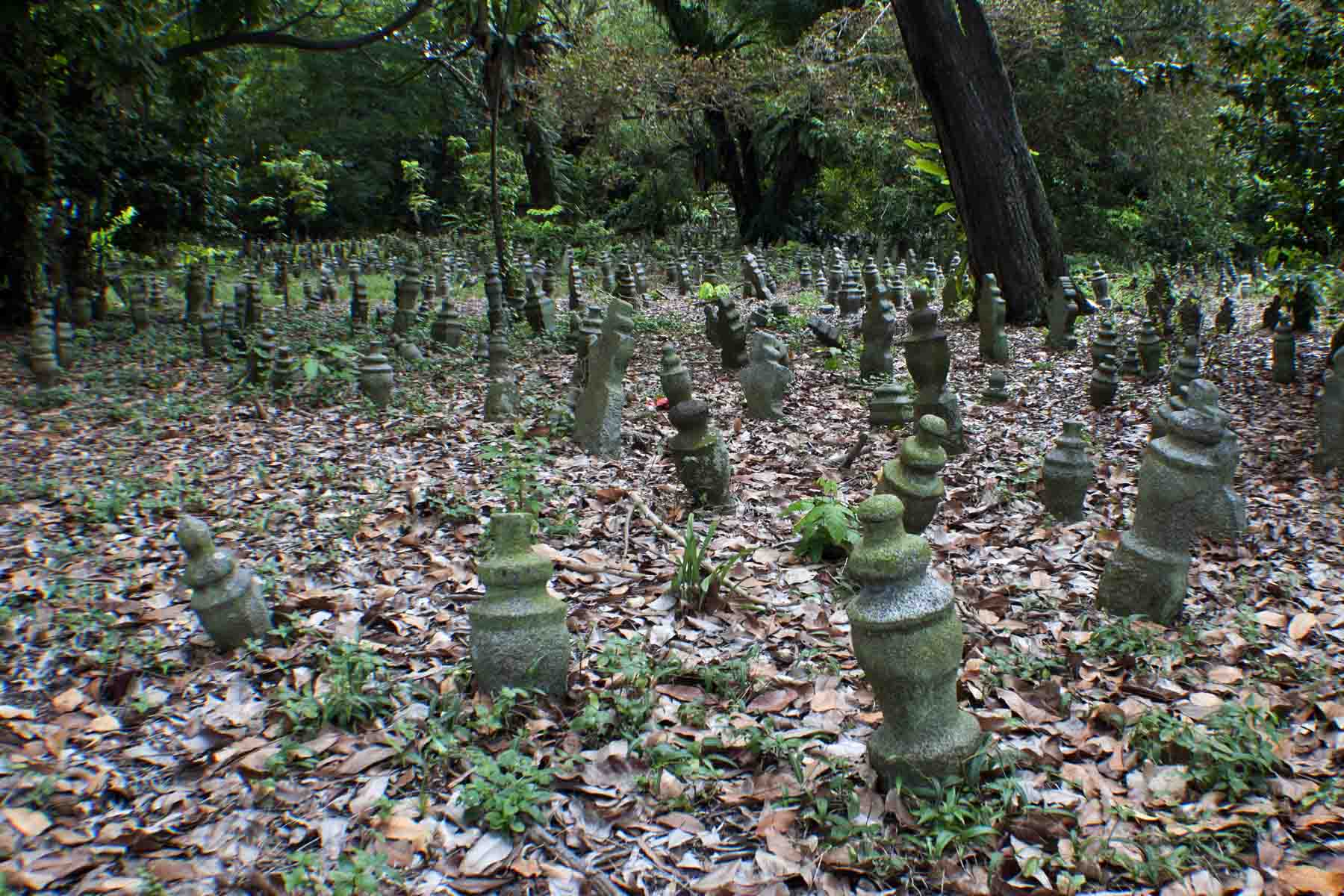 Old tombstones in the neglected cemetery 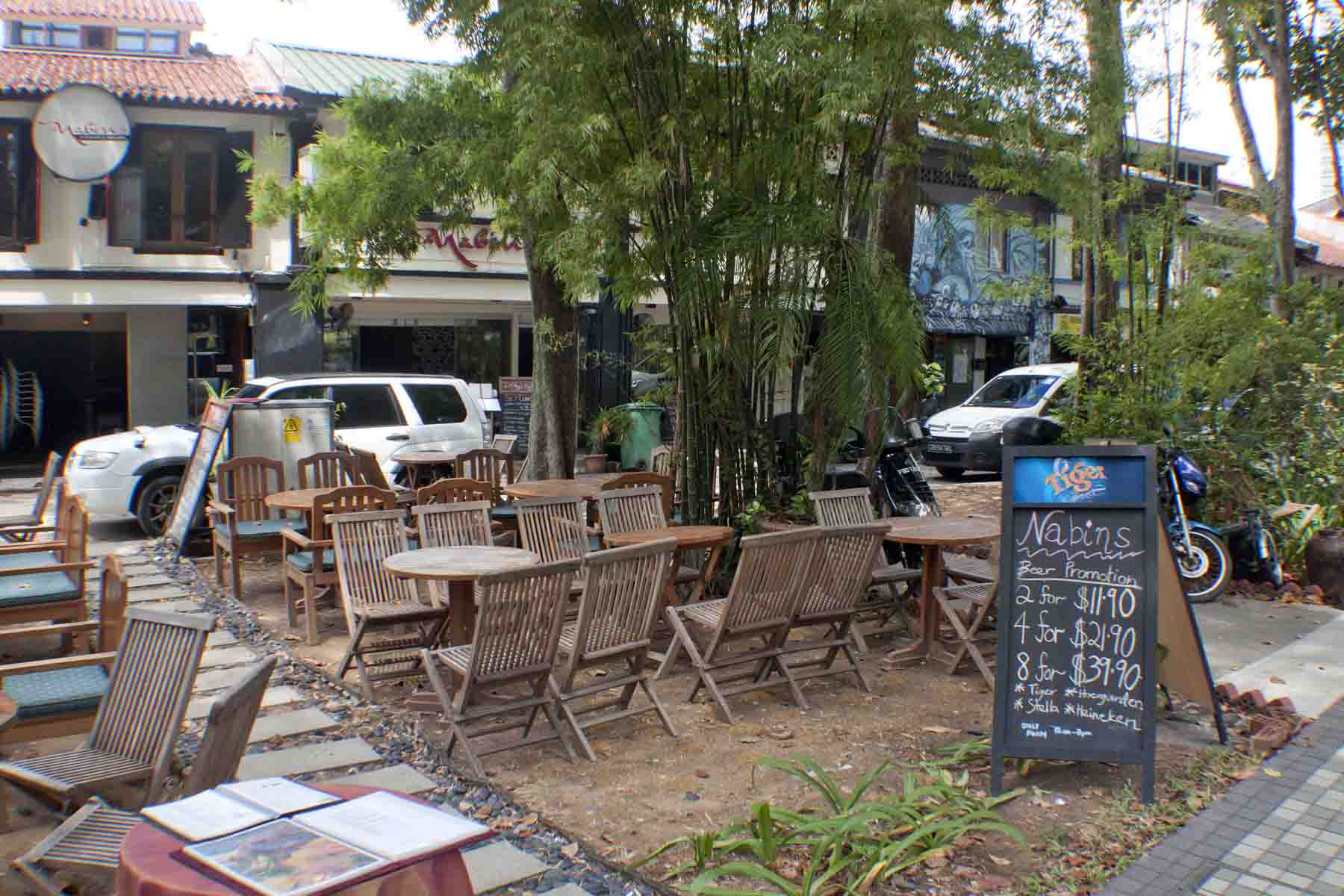 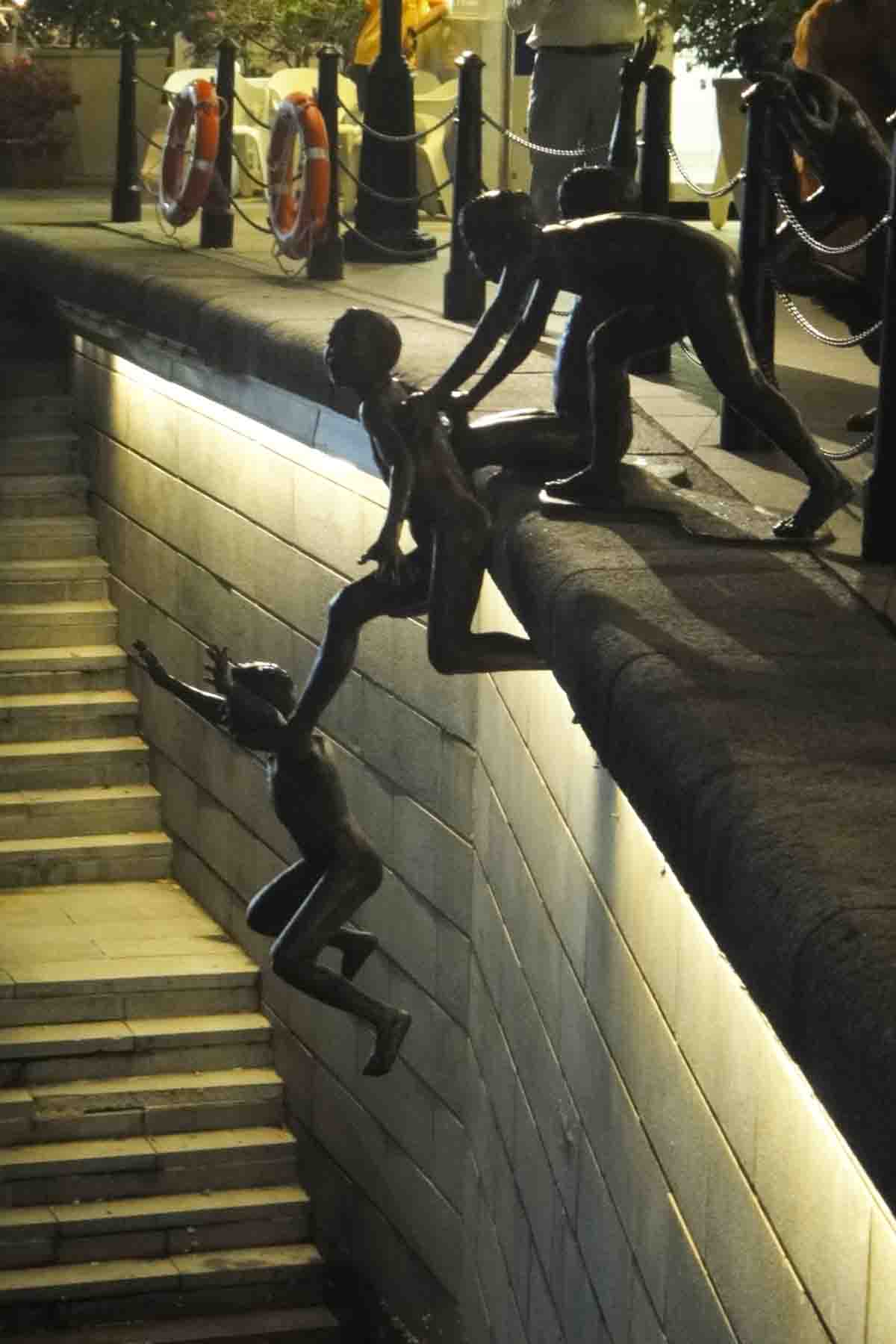 After freshening up, we set out again in search of Harry’s Bar, which according to our trusty Rough Guide, was a sure thing. Problem was, there were two of them along the waterfront, and we didn’t go to the suggested one at Boat Quay, but rather the one at Clarke Quay, by mistake. Bit of a disappointment, actually…who am I kidding – HUGE disappointment, really! The drinks were terribly average (mojitos made on brown rum and had too much sugar), and the food was rubbish – a marguerita pizza that claimed on the menu to be topped with basil, and in fact had zero basil content, and then incredibly average wedges with NO sour cream! We should’ve learnt from the pizza and by-passed the wedges, but seriously – who can stuff up wedges??!! Thankfully, the evening took a turn for the best with a relaxing and picturesque walk along the riverside well into the evening. The Fullerton Hotel was a big, gorgeous, stunningly-lit eyeful – if one was loaded, it would be difficult to choose between the Fullerton and Raffles on one’s next visit to Singapore – neoclassicism in all its glory! And strolling arm in arm for the rest of the walk home – ah, bliss. 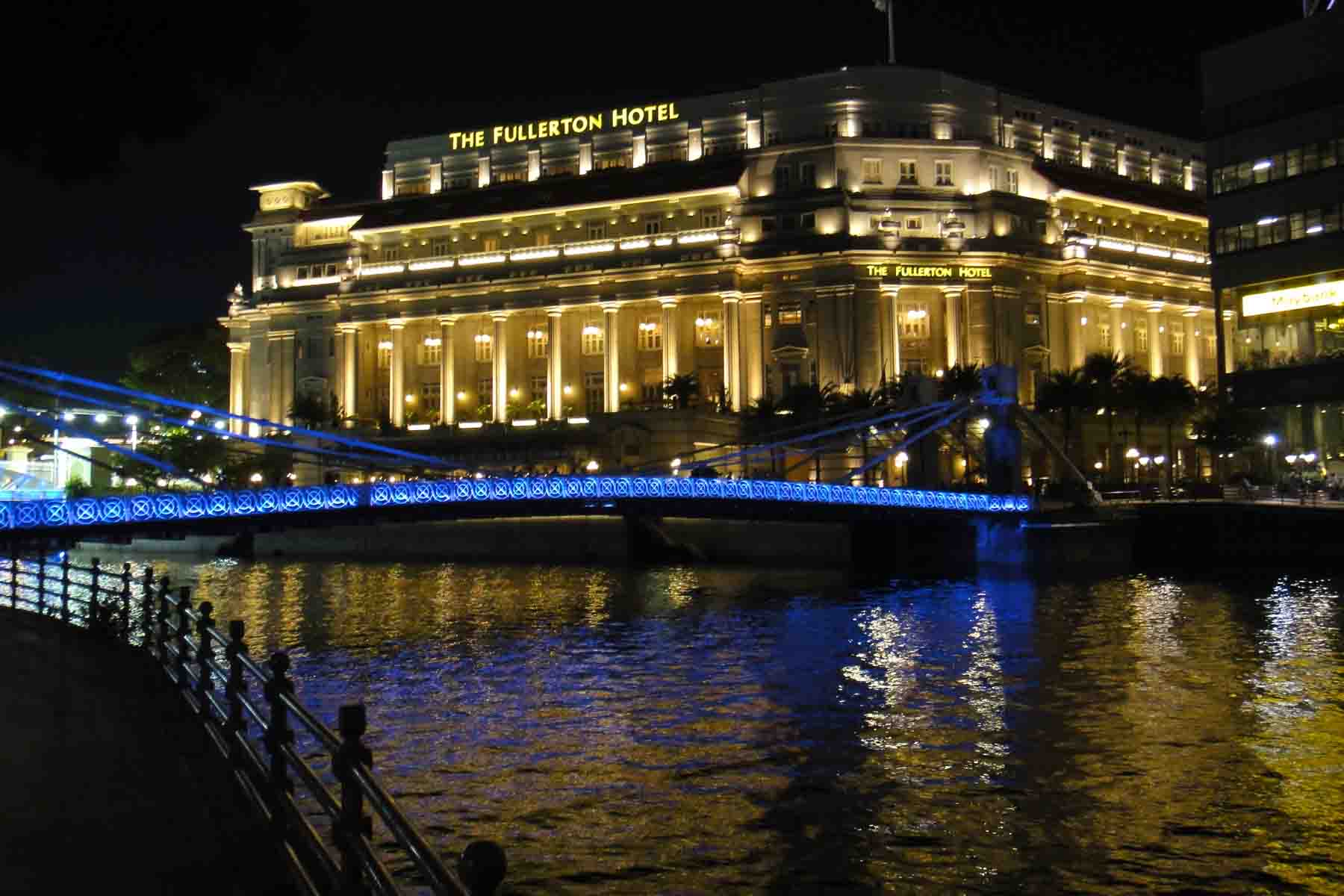