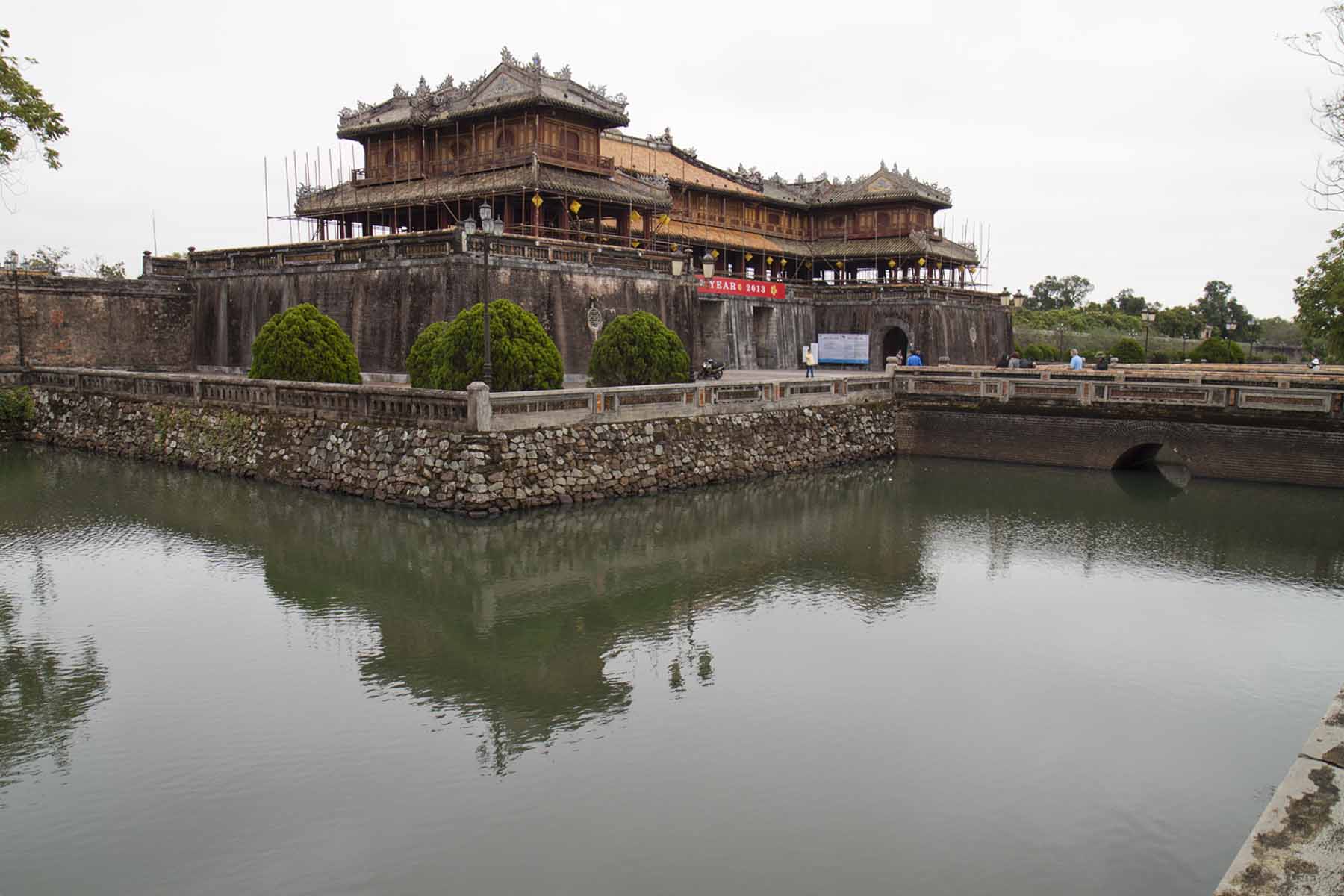 We slept very well last night, and joined other guests in the busy breakfast room for our morning meal. The brekky supplied at the Orchid Hotel would’ve been a joy for most travellers – there were oodles of sweet options in the forms of cakes, pastries, tarts and croissants, a couple of sugary cereal choices (I assume aimed at kids), the usual bacon and eggs, and bread that we could toast. They also offered specially cooked breakfasts, and I opted for a traditional Vietnamese soup, but it wasn’t as tasty as others I have had since arriving in Asia. John was disappointed that there wasn’t anything ‘bran-like’ in the cereal options, just fruit loops and coco-pops.

We planned a very big day exploring Hue, and had our driver from last night, Ding, escort us to four of the big attractions; the Ancient Citadel, Thien Mu Pagoda, Tu Duc Tomb and Khai Dinh Tomb. The Citadel (built in 1805 and designated a World Heritage Site in 1993) is one of Vietnam’s treasures, located on the banks of the Perfume River and comprising three enclosures – the Civic, Imperial and Forbidden Purple Cities. While it was heavily bombed by the American troops during the war and most of it was destroyed, recent reconstruction gives some idea of the beauty and scale of this extraordinary citadel. The detailed dioramas in the Thai Hoa Palace helped our imaginations recreate the Imperial city in its hey day. One highlight for me was seeing the elephant strolling through the courtyard with her handler on the way to the spot where all the tourists line up for their morning ride.

The steps to the Thien Mu Pagoda, Hue

Thien Mu Pagoda (also known as Linh Mu – “Pagoda of the Celestial Lady”) stands on the site of an ancient Cham temple along the Perfume River. Legend has it that in 1601, “Lord Nguyen Hoang left Hanoi to govern the southern provinces…Upon arriving at the Perfume River he met an elderly woman who told him to walk east along the river carrying a smouldering incense stick and to build his city where the incense stopped burning. Later Lord Huong erected a pagoda in gratitude to the lady, whom he believed to be a messenger from the gods, on the site where they met” (The Rough Guide to Vietnam). While this multi-tiered-wedding-cake temple is very attractive, it’s a bit of a feat to enter or leave the place without being physically led to one of the many boats offering bargain cruises on the Perfume River. I did have to gently disentangle myself from one very persistent old woman, and if my legs weren’t longer than hers to make quick my escape, I am sure it could’ve gotten a tad ugly.

View of the Perfume River from the Thien Mu Pagoda, Hue

The Mausoleum of Tu Duc is truly very beautiful and serene, with elegant pavilions surrounded by lakes, ponds, pines and lush gardens spread over 12 hectares. The king himself designed this Nirvana, and preferred the quiet comforts of this retreat more than being at his palace. There is even a specially made lakeside pavilion where he would write his poetry! He even wrote his own self-critical eulogy that is carved into the twenty tonne stone stele, now housed in an intricately carved stele-house atop a hill in the group of buildings of ‘The Emperor’s Tomb’. Although, it is said that when Tu Duc died, he was secretly buried with a great treasure, and then all involved with his burial were then executed. Trust issues, much?

The Tomb of Khai Dinh is a striking contrast to that of Tu Duc. It has no gardens or living quarters, and has only one main structure. It is perched atop a hill with glorious views, which make the climb of 130 odd steps certainly worth your while. The architecture of this tomb deviates from those tombs of the rulers before Khai Dinh; not only does the design reflect a distinct mix of Vietnamese and European Baroque styles, the internal décor is all high-camp bling, and “look-at-me-aren’t-I-fabulous” ostentation everywhere.

We had Ding drop us at a restaurant called La Carambole for lunch, which was around the corner from our hotel. We mistakenly thought that we had chosen Les Jardins de la Carambole, a French restaurant that sounded a little special on TripAdvisor, but we hadn’t. Where we ate was not the amazing culinary experience that we were expecting, but was fairly solid, ordinary fare instead. Oh well.

After lunch, John succumbed to a lurgy that had begun to plague him during our morning tour and spent several hours asleep at the hotel. I filled my time walking the city. Everything is so spread out – not the fast to negotiate and traverse city that Hanoi is. I crossed the river and wandered through the Dong Ba Markets and surrounding streets, crossed back and headed west toward some posh hotels. I probably walked for about 5 or 6 kms, but didn’t really feel like I’d seen much of the place…unless that was all that the city had to offer! Yes, there are the sites of historical and cultural importance and beauty, but these are very spread out, and make a tour or private transfer necessary (preferably a ride that is a notch above a cyclo for the more ‘out of town’ choices). Apart from these lovely drawcards though, I didn’t find much in the city itself to endear Hue to me – I much prefer a city I can negotiate with my feet. 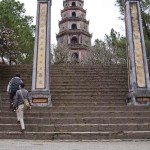 The steps to the Thien Mu Pagoda, Hue 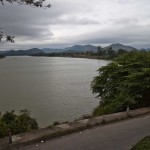 View of the Perfume River from the Thien Mu Pagoda, Hue

The pavilion for poetry writing at Tu Duc’s Mausoleum 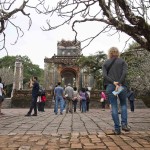 The stele-house at Tu Duc Tomb 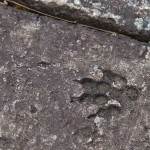 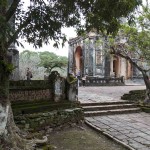 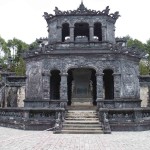 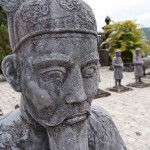 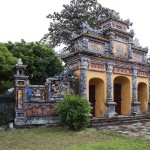 Gate to the Dowager’s Palace (“The Gate of Everlasting Happiness”), Imperial City, Hue

Street corner near our hotel 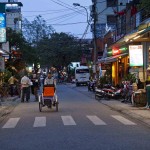 Reflection in the Imperial City, Hue 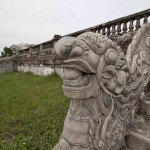 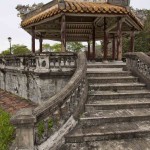 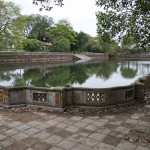 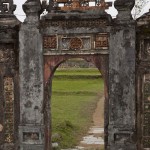 Archway leading from one walled courtyard to another, Imperial City, Hue

A throne awaiting ‘dress-ups’ and photo-ops 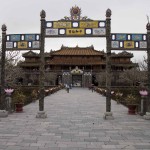 Koi and carp jostling for a feed 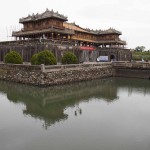 Detail on one of the Nine Dynastic Urns 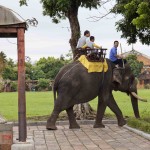