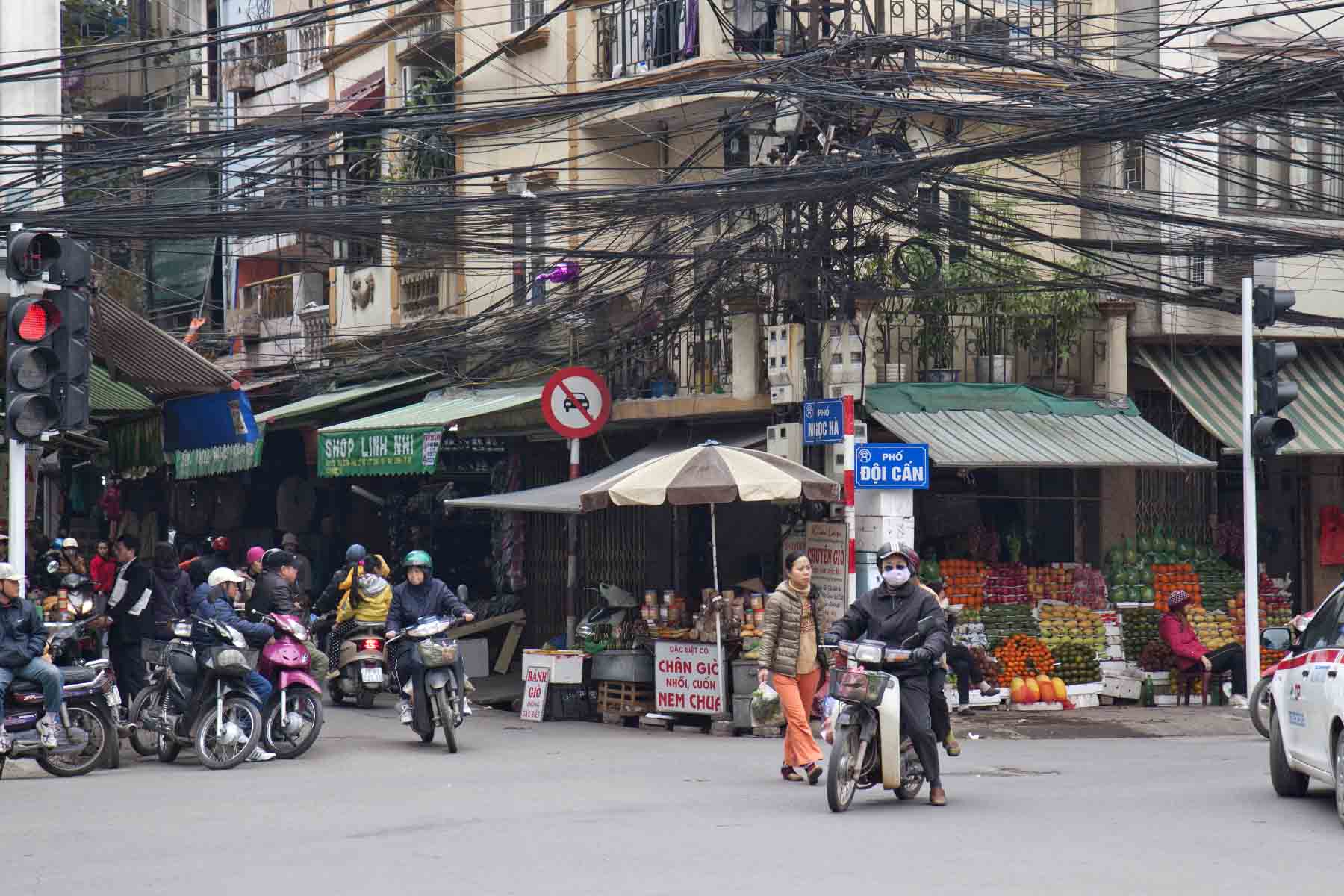 Today began with good intentions – to visit the Ho Chi Minh Mausoleum. But after the cab driver dropped us off and we still had to walk in an odd grid pattern through the streets for several blocks to find the beginning of the line (which was well over a kilometre long), we were a tad put off. We were told by some tourists that there was a significant ‘Uncle Ho’ anniversary of some sort happening, but locals told us that it’s always that busy. You’d think, surely, that with these sorts of crowds they’d consider opening the place beyond the limiting morning spot of 8-11am. 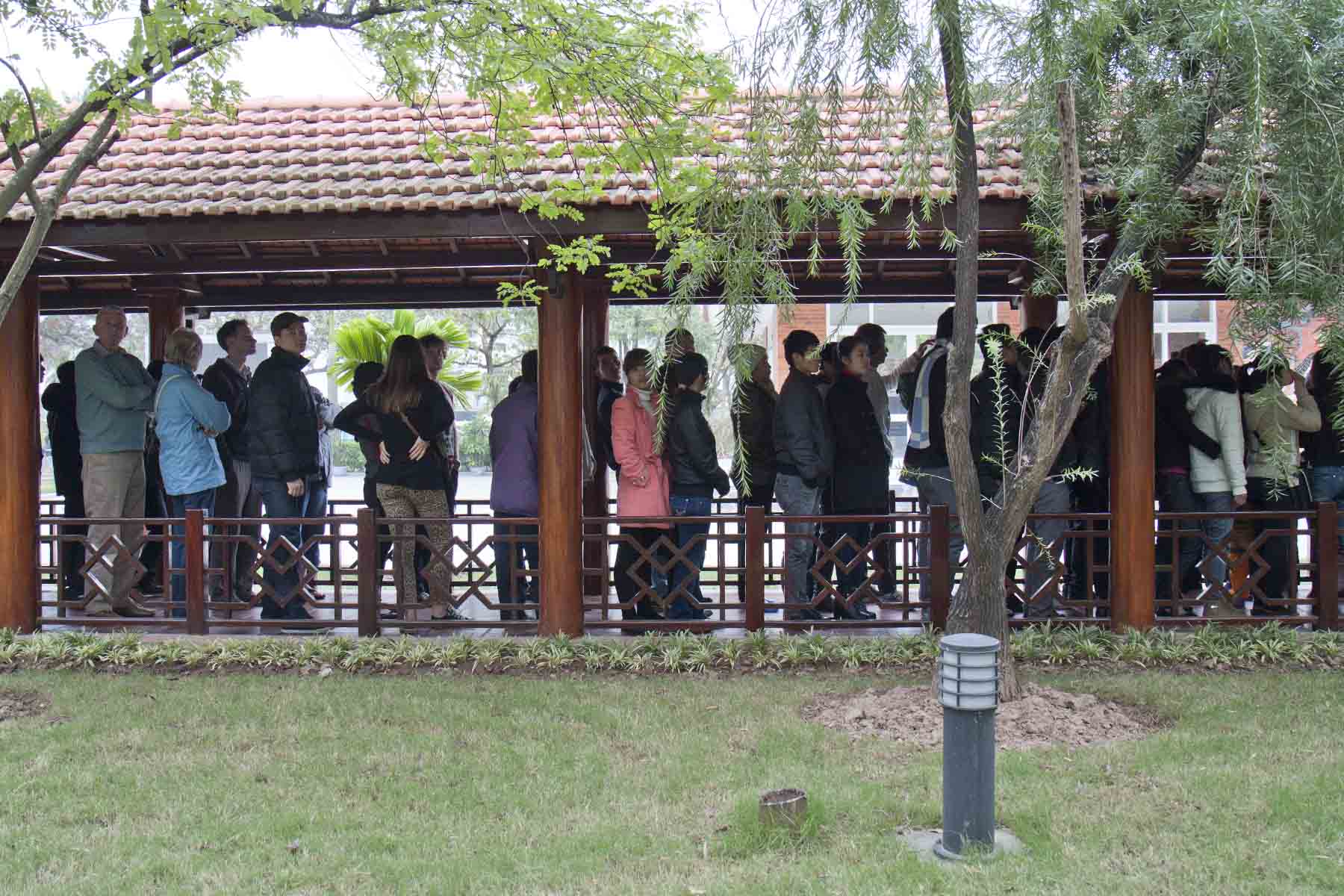 So we decided to ditch this choice and grabbed another cab to the Vietnamese Museum of Ethnology, about 6kms from the centre of Hanoi. Our pocket sized little cabbie didn’t really understand where we wanted to go, so we were driving around for a bit, with him stopping occasionally to look again at the guide book, printed in English, to try and decipher where we wanted to go. My western reasoning (with it’s relatively bulging wallet) kept wondering why he accepted the gig in the first place if he didn’t understand where we wanted to go, but I have a stable wage in a government job in Australia, so, you know, shut up, Nic! He eventually pulled over and called a mate, who shed light on the situation for him. He made lots of ‘comprehension’ noises, as the confusion faded, hung up and pulled an A4 laminated sheet from the inside of the car door, pointing to a Vietnamese translation of the Ethnological Museum, grinning and nodding. We were all very relieved, and he got more than double what he would’ve for the actual fare of taking us to the Museum. At the time, I had to really focus on the positives of the situation and not be peeved, but looking back, he was actually very sweet. And it really wasn’t worth getting too stressed about the fares – even though we were also overcharged on the return trip by a young cowboy cabbie with a rip-off fast metre going. The entire trip, there and back, still only cost us $7. Bargain by Sydney prices! 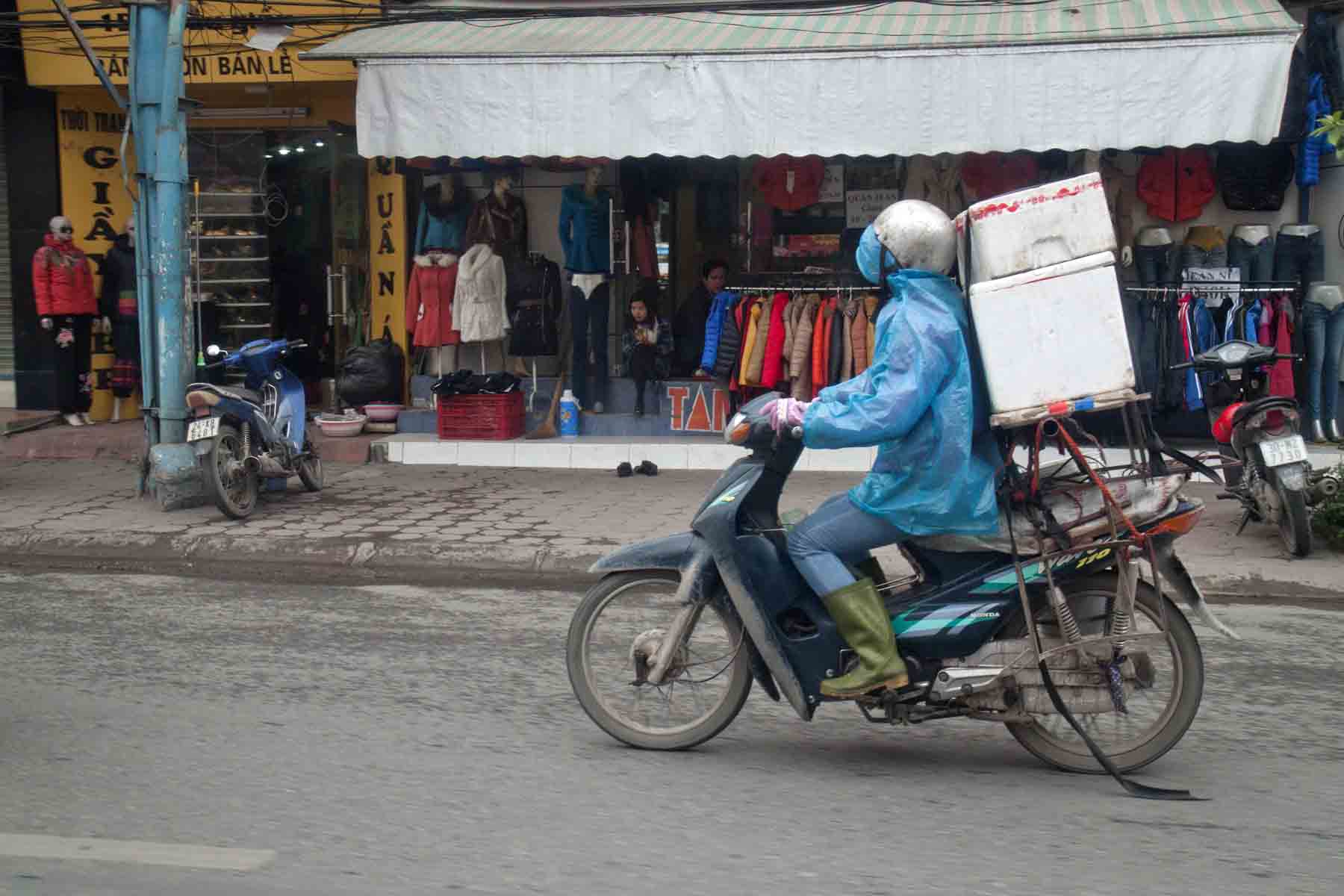 Have no idea how this driver can see where they are going!

We are bits of fans of Ethnological Museums, especially the ones that have the actual, real old buildings transferred from their original locations to the Museum grounds. This one was still within the city, so the grounds themselves were quite small – in fact, the huts and tombs were pretty much ‘just out the back’ of the large, relatively new, museum, rather than on vast grounds reflecting their original sites. One particularly intriguing and highly amusing structure was a traditional tomb. Now before you ‘tut’ and ‘tsk’ about me giggling at a sacred burial….house…you should see the pictures – this tomb was decorated with, in fact surrounded by, statues sporting huge dongers. Yes, you heard correctly, carved wooden statues with huge phalluses…pointed at female statues with a variety of expressions on their faces – from shocked to…well, it’s open to interpretation. Classic! This little gem hails from Chu Pa District in Gia Lai Province. Circle of life, and all that. 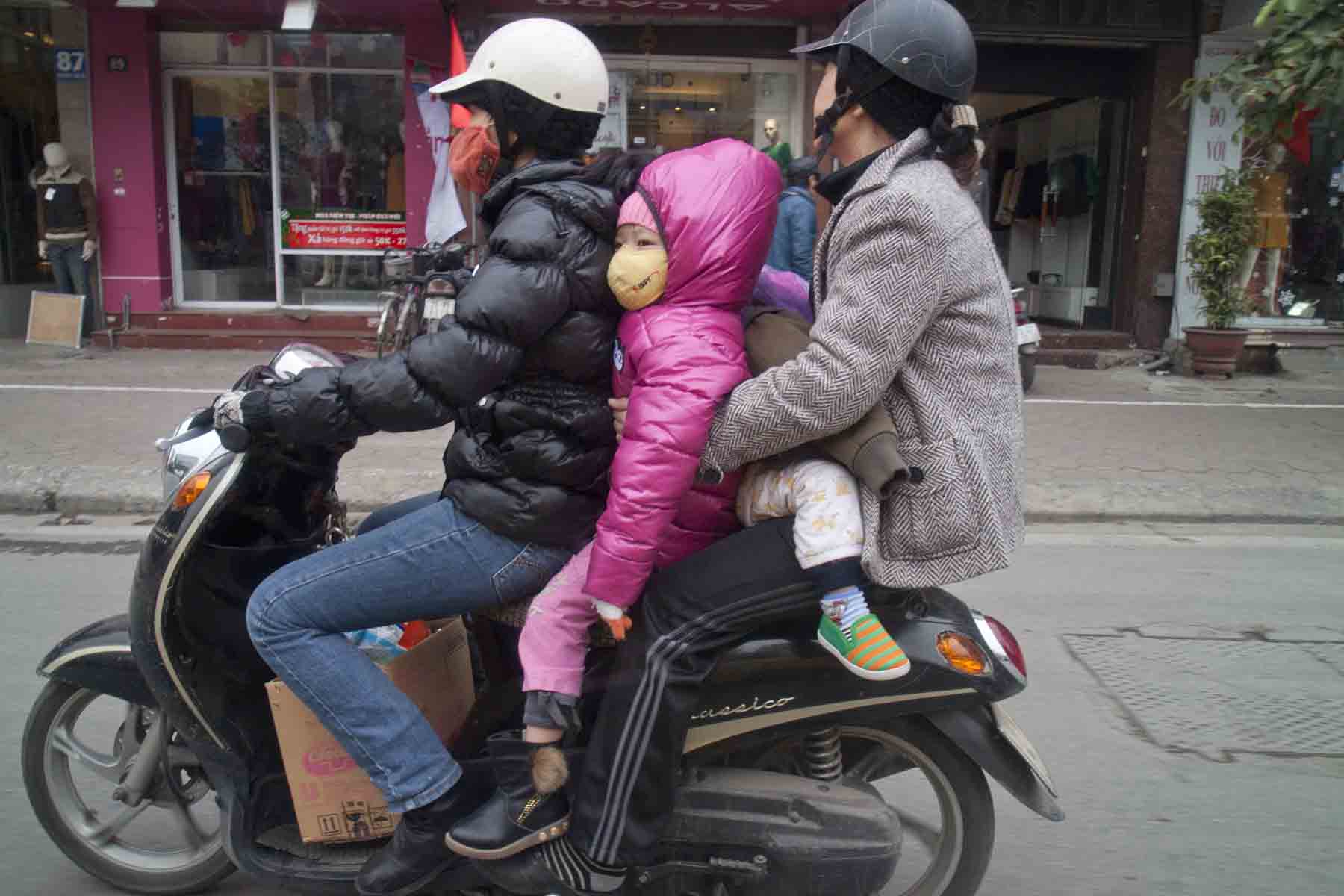 All rugged up and snuggly

On recommendation from a couple of friends, we went to KOTO Restaurant for lunch. This place is completely staffed with ex-street kids who have turned their lives around. But even if you weren’t interested in supporting the ethos behind the restaurant, the food was still good, so the ‘good cause’ motivation was a bonus. It was packed, and the waiters very eager to help. The only negative aspect of the food experience was my pumpkin soup was tepid – to be fair, they asked if I wanted it reheated, but we had waited a little while after placing our order (a big group had arrived just before us), and I didn’t want to be delayed further. Though they were eager for the feedback given, which is good. 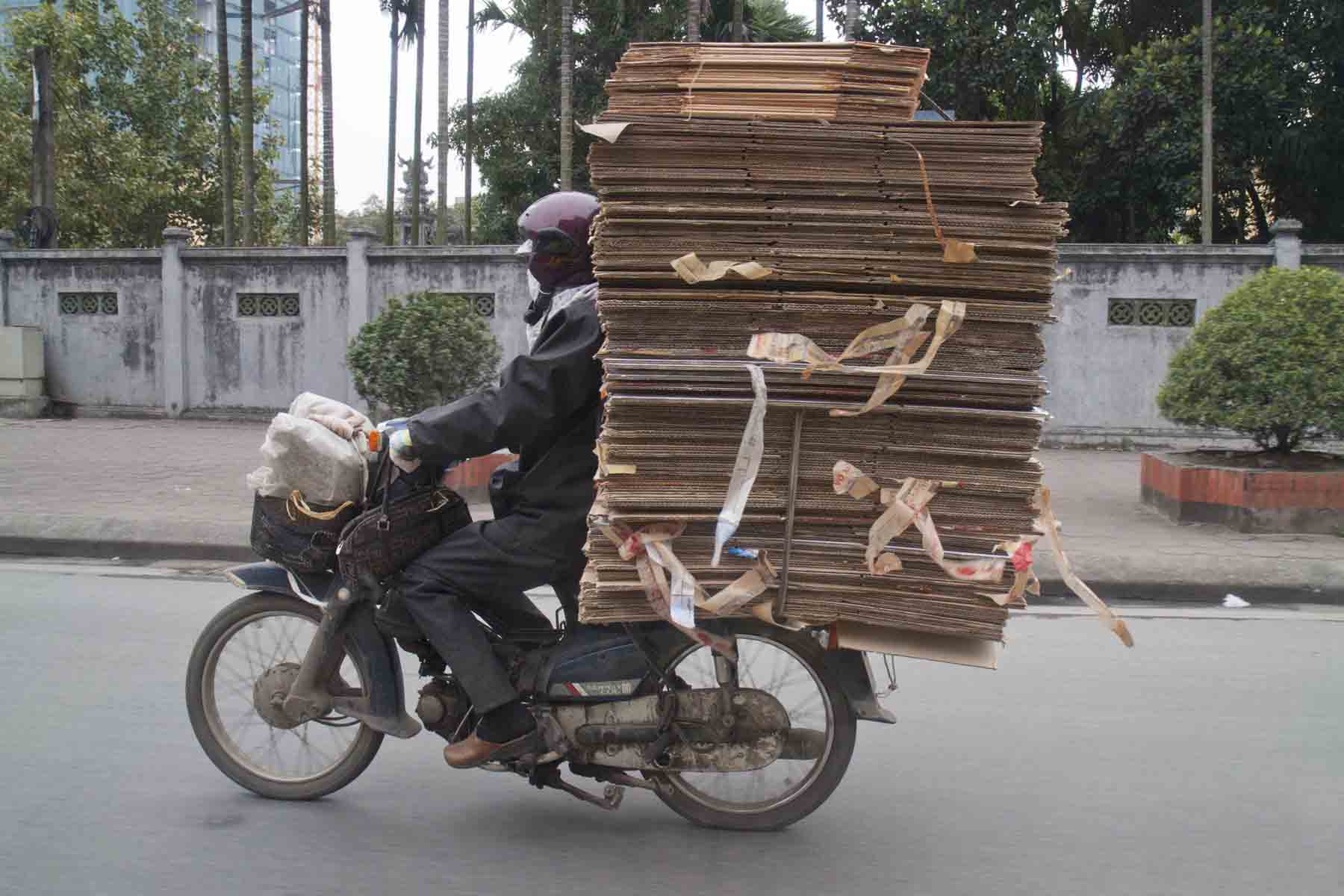 With full stomachs we ventured across the road to the peaceful Temple of Literature, which was dedicated to Confucius in 1070 and later became a university. This is a truly beautiful place of perfectly symmetrical design with serene gardens, modelled on the original Temple of Confucius in the Chinese city of Qufu. It is truly a shame that the tranquillity of such a place can be so easily disturbed by the stupidity of others. I get so frustrated by people who ignore clear, precise signs in three languages (one of which is their own!!!) and arrogantly go about defiling important historical sites and sit on 600 year old relics for ‘good luck’ photo-ops – the tools! We left before I got all ‘teacher on their ass’.

We caught another cab to St. Joseph’s Cathedral and clambered out amongst a few other tourists. We were immediately approached by friendly chap who informed us that the Cathedral was closed, and not as a one off thing – it’s only opened 5am-7am and 5pm-9pm. Good grief, why??? Not at all sensible from a tourist perspective…but maybe their plan is to keep all but the dedicated faithful out of the place. Our friendly chap was very low key in his chatter and quite helpful with his information…before trying to sell us some DVDs! We thanked him for his assistance, declined his kind offer to purchase his product, and headed off again, walking back towards the lake.

We managed to get tickets to the Water Puppet Theatre show, but only through persistence – the box office lady pointed to a sign saying that the next available tickets were for the 9:15pm show (about 3 shows later than we wanted), and I asked a couple more times if she was absolutely sure that there had been no tickets returned, and viola! – we got seats for the 6:30pm show. I think she could sense I was not going to be easily put off.

To amuse ourselves until show time we went for a wander around Hoan Kiem Lake, starting with the Huc Bridge (“the place where morning sunlight rests” bridge) and Ngoc Son Temple (“Jade Mountain Temple”). The bridge is a very popular spot for lovers to meet and photographers to take sunrise and sunset shots – although it was a tad crowded, even in the middle of the afternoon, to be a terribly romantic spot for a rendezvous. As we were leaving the bridge, a young Vietnamese woman (early 20s?) gestured at her smart phone and indicated taking a picture. I said sure and went to take the phone from her, but she quickly shook her head and passed the camera to her boyfriend – she wanted a pic of her and me! This is not the first time this has happened – especially with older teens and young 20-somethings. It’s the whole blonde thing- I’m a rock star (to which the glamorous photograph can attest!).

After my brush with fame, we kept walking (no autographs, please!), past the statue of King Ly Thai (Hanoi’s founding father, in all his imperious glory) that stands east of the lake, paused for a moment to gaze at the Tortoise Tower (Thap Rua) on an island in the centre of the lake (not accessible by the public, but prettily lit at night), and continued on to the Opera House. This gorgeous building (now officially known as the Municipal Theatre) was modelled on the Paris Opera House, clearly reflected in its columns and grey slate roof tiles imported from France. It was opened in 1911, but fell into disrepair at the end of the French rule, and was pretty much completely abandoned in the 1980s. It took 3 years and $14million USD to restore it to the magnificence we see today. The other similarity to the Paris Opera House, is that it’s not open for random visitors (which is very disappointing!).

Our stroll took another detour past a remarkable number of ice cream shops and then through the French Quarter (which we really haven’t done justice to on this visit, unfortunately). Although I guess the number of ice-cream shops wasn’t that remarkable, it was more the number of people patronising them – all rugged up in snow jackets, chowing down on their frozen treats and shivering! Bizarre. 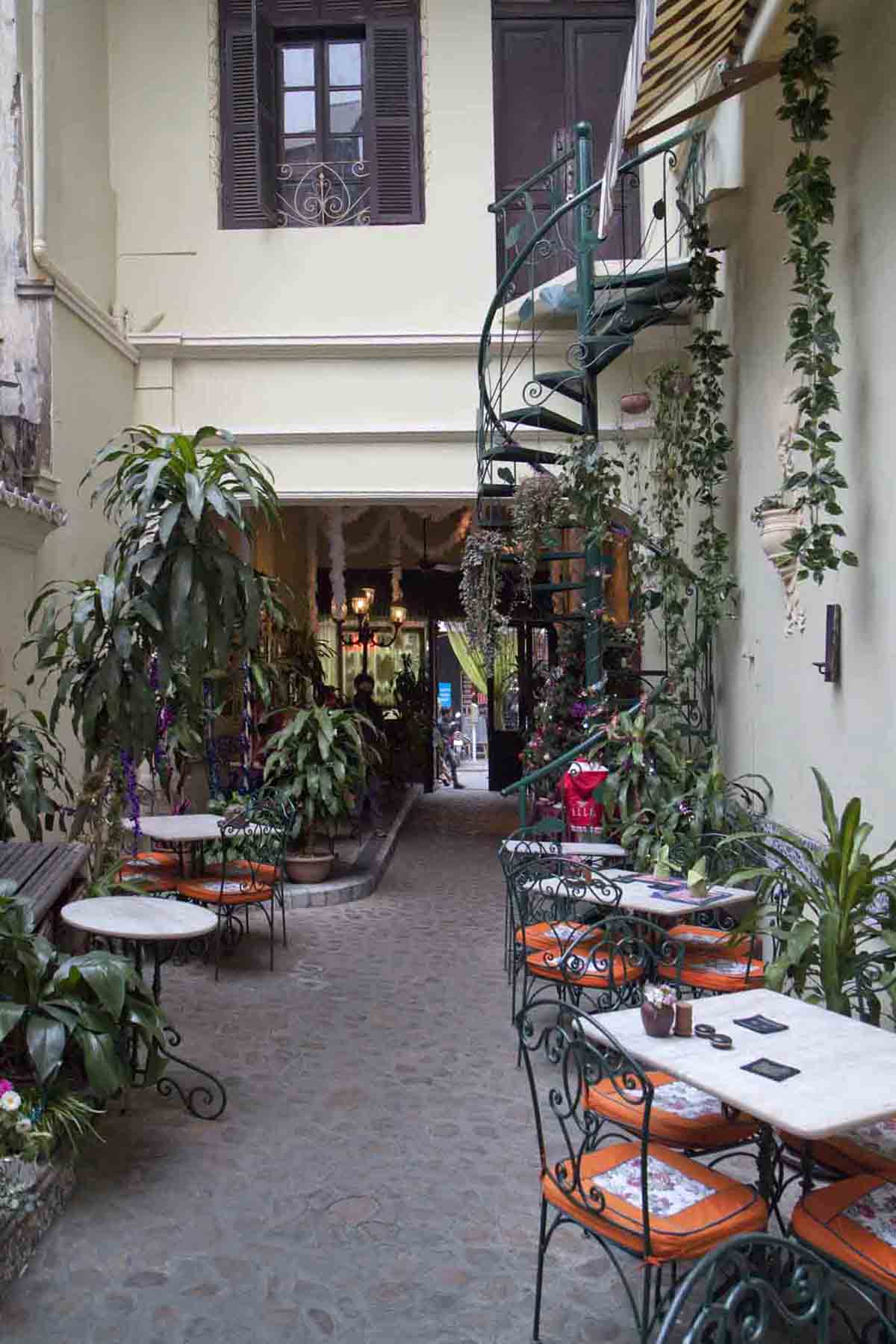 We meandered back to the Old Quarter and popped into the Green Tangerine Restaurant, for a meal that has no name – a between lunch and dinner affair, because that’s when we felt like eating. I have been dreaming of a meal like this for weeks, now (not the time of the day we were eating, but the food!) – French inspired, vegetarian, with excellent wine, all in a fabulous little 1920s Art Deco villa, with fern filled courtyard, and outstanding service.

Am loving the compactness of this city – it seems we are able to walk to most places we want to go from our hotel in the Old Quarter (Hanoi Elite Hotel). We walked to the Thang Long Water Puppet Theatre for our 6:30pm show. It’s a real tourist draw this place, complete with tour buses double parked outside doing mass drop offs and pick ups. This traditional form of entertainment originated in the Red River Delta, and is thought to date back nearly one thousand years. The water puppets, called mua roi nuoc (literally puppets that dance on water) are wooden marionettes operated by puppeteers hidden behind a screen, wearing traditional clothes teamed with salmon fishing water proof pants, and manipulating the figures with long thin sticks of bamboo. The puppets really are mesmerising in their dance and story telling – all history, intrigue and naughtiness unfolding perfectly clearly through dexterous manipulation, gorgeous colours, lights and live traditional singing and music (and sur-titles).

Hanoi street, in the Old Quarter

I have noticed lots of plastic shopping bags full of rubbish dumped in the gutters, some busted open, others left there, sometimes in groups of 2 or 3. We discovered tonight that that is where people are SUPPOSED to leave their rubbish for collection – they don’t have bins to put out, instead the bags are hand collected by someone in an official uniform pushing a very big bin. The busted ones have obviously been run over by bikes or cars. Glad to know that they are not being slovenly, it’s actually the routine to neatly dispose of their rubbish. 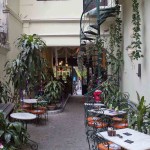 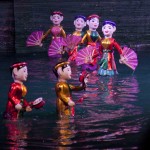 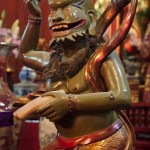 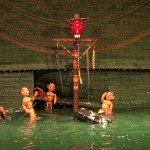 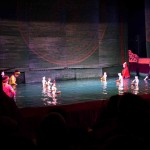 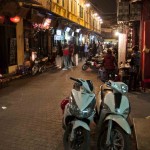 Hanoi street, in the Old Quarter 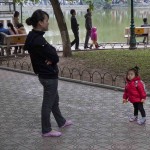 Mother and daughter (leaning parallel to the tree!) 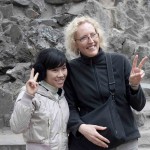 Vying for pole position in Hanoi 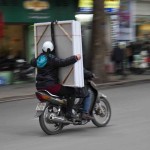 Jade Mountain Temple in the centre of Hoan Kiem Lake 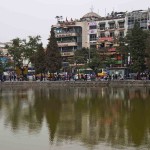 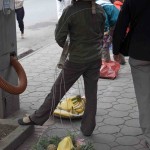 A laid back fruit seller

Confucius bronze at the Temple of Literature 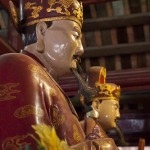 Confucius state at the Temple of Literature

Watching the world go by 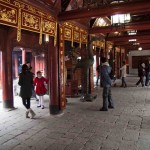 Bronze dragon at the Temple of Literature 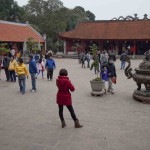 Courtyard at The Temple of Literature 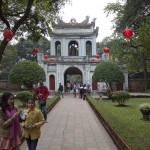 The Temple of Literature, Hanoi 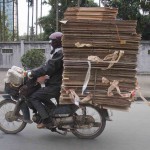 All rugged up and snuggly 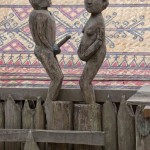 Traditional raunchy carvings on a tomb 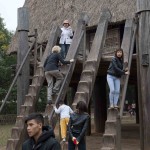 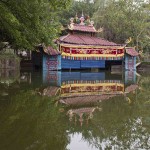 Colourful display of a traditional funeral in the Ethnological Museum 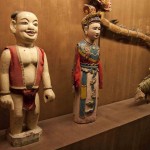 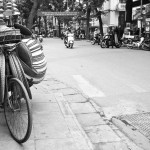 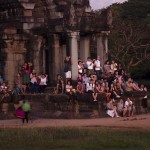 The crowds jostling for position at Angkor Wat, sunrise 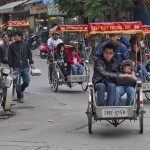